What’s Up With The Creepy Apocalyptic Paintings In Denver International Airport?

Filled with fire, dead bodies, and terrified children, there’s a certain painting at Denver International Airport that seems a bit out of place. 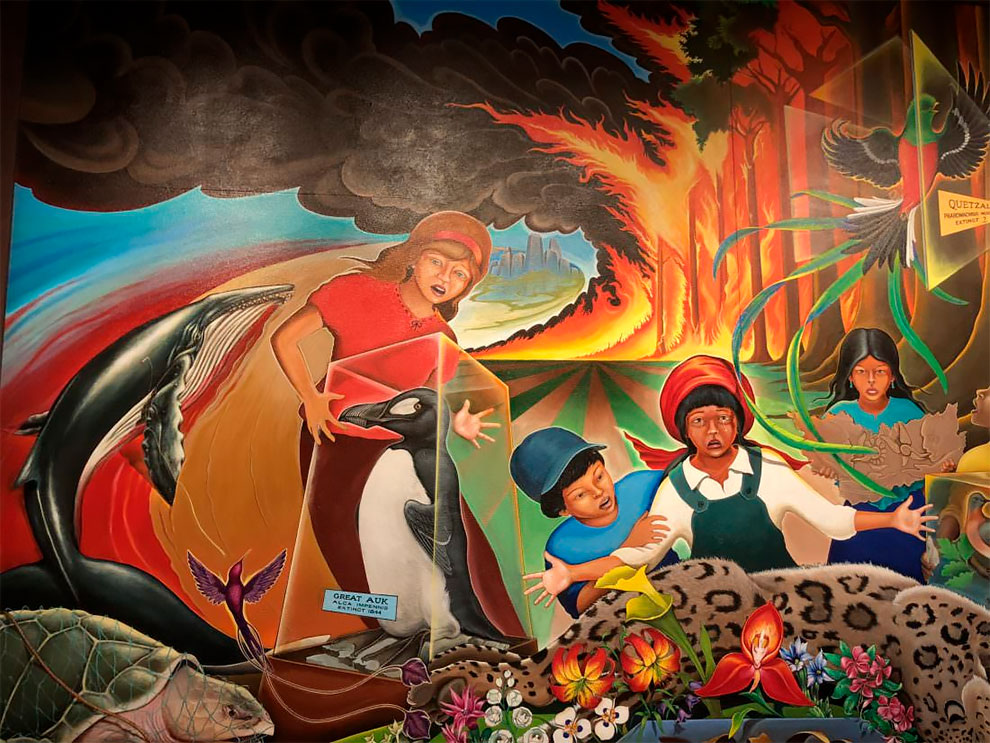 Titled “In Peace and Harmony with Nature,” this mural by Leo Tanguma has resulted in raised eyebrows over the years, leaving many travelers wondering why such a graphic work hangs in a hallway next to baggage claim. Some onlookers have left offended, while other people have claimed that the painting is at the center of a conspiracy theory that revolves around Denver International Airport and the Illuminati. Let’s take a look at why the painting exists and try to interpret its meaning. While the mural might seem random, a more in-depth look points to that being far from the case. 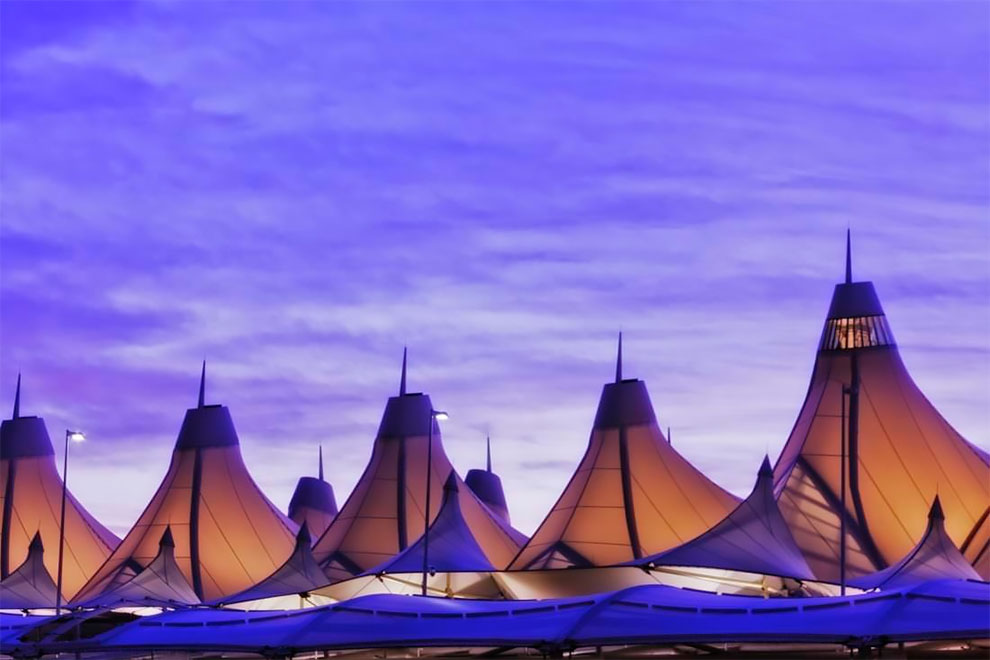 The baggage claim mural is actually one of four by the same artist at Denver International Airport, each painted in 1995 during the airport’s construction. The four paintings make-up two overarching pieces of art, the first being “In Peace and Harmony with Nature” and the second titled “Children of the World Dream of Peace.” While the violent nature of each can be a bit distracting, closer analysis makes their messages (a little) more clear.

First, let’s take a look at “In Peace and Harmony with Nature.” The first mural of this set features a fiery scene in which massive tree trunks burn brightly, sending smoke billowing across the top of the mural. Children and a young woman are seen fleeing the flames, as some carry extinct animals in glass cases. 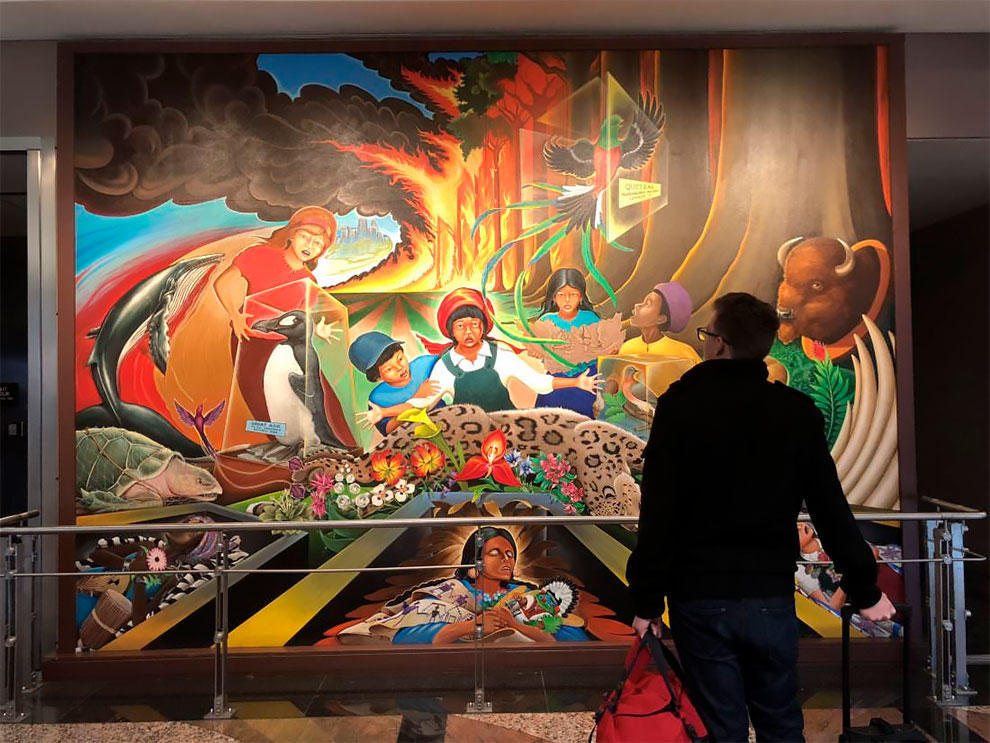 The foreground of the scene also features two bodies in caskets, a dead tortoise, and the ribcage of a large animal. 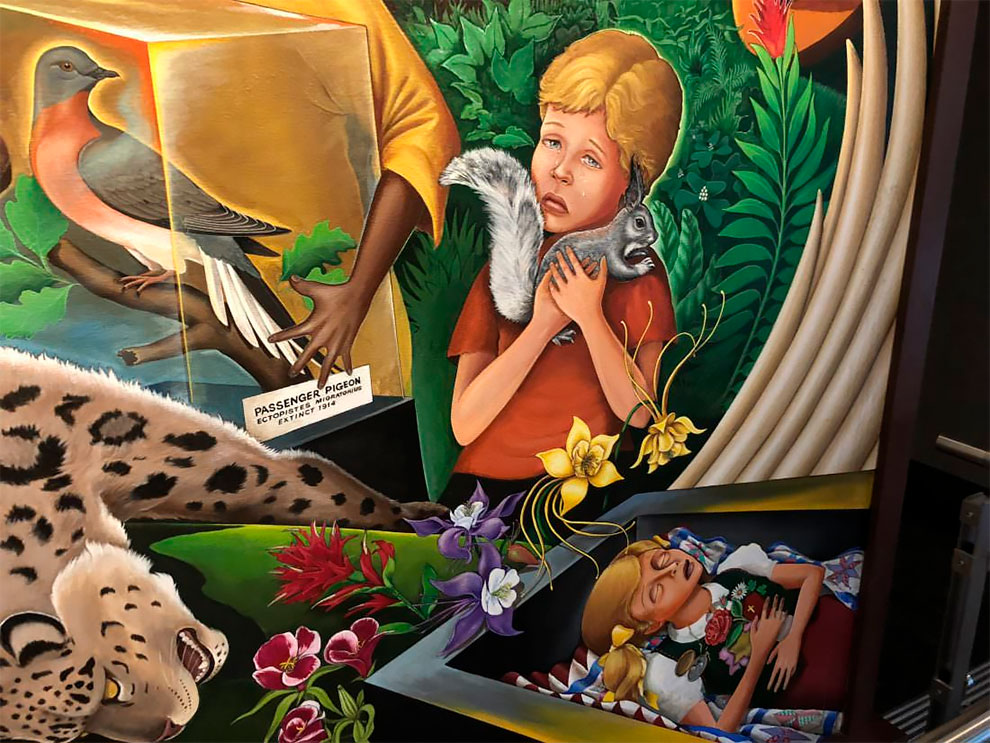 This scary scene contrasts with the second half of the painting (found to the right of the first), which features happy children presumably from various cultures around the world coming together in joyful celebration, while animals and their young are alive and well in the background. 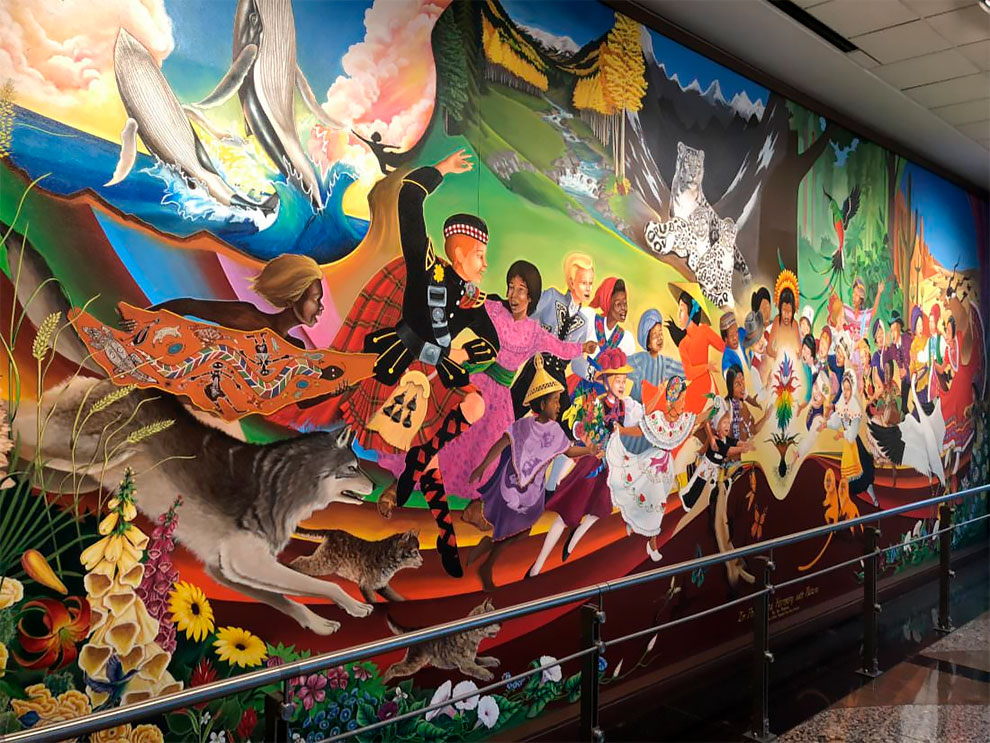 While it doesn’t appear that artist Leo Tanguma made an official statement regarding this specific piece, the official interpretation on Denver International Airport’s website states that “the first half of the mural shows children displaying great sadness over the destruction and extinction of life, as the second half of the artwork depicts humanity coming together to rehabilitate and celebrate nature.” Though this description is slightly less morbid than the mural appears at first glance, some also argue that the paintings could be viewed in opposite order or even as alternate realities of the same scene, possibly meant to imply that without peace across cultures, chaos will ensue. 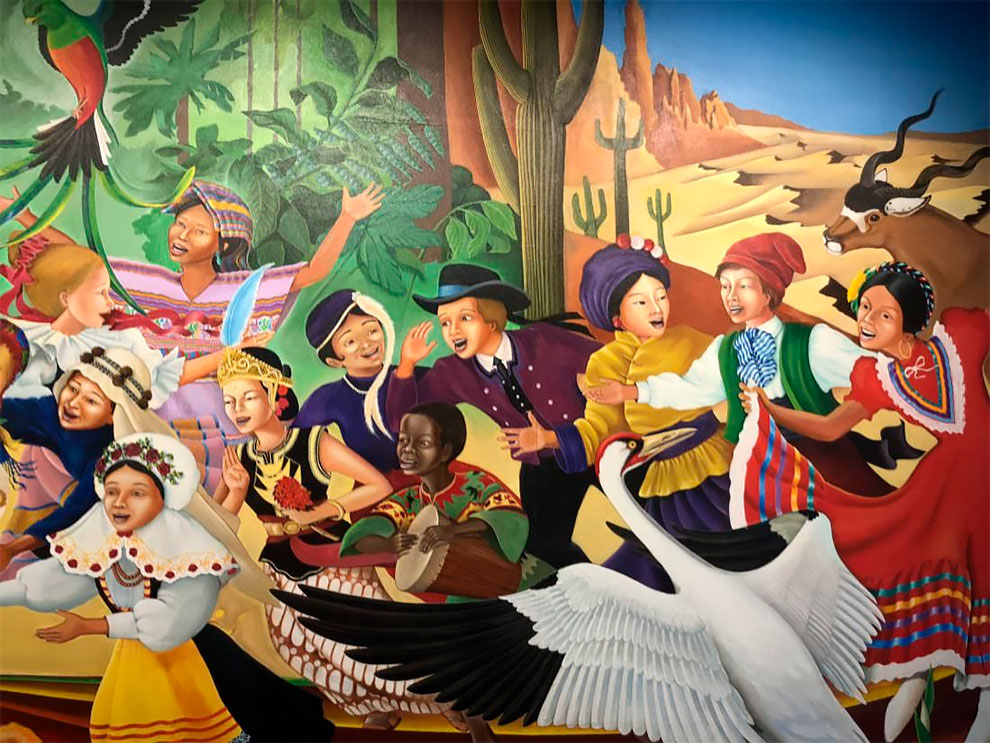 This idea that Tanguma has the goal of teaching a lesson through artwork is reinforced by his other set of murals at DIA, perhaps more striking than “In Peace and Harmony with Nature.” This second set, titled “Children of the World Dream of Peace,” also features two paintings that depict very different realities. The scenery of one painting is of a city in decay, and the central character is a soldier in a mask who is brandishing a sword and rifle above sleeping children while stabbing a dove. 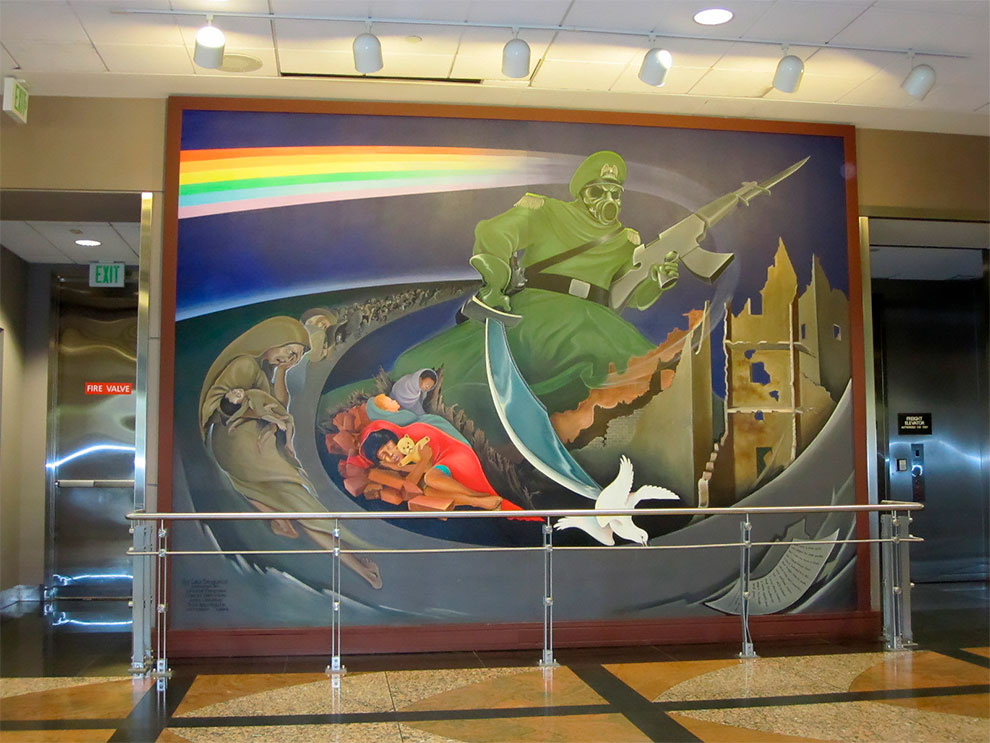 The second painting features people of diverse cultures celebrating above what appears to be the corpse of the same soldier, complete with two doves resting on the butt of the soldier’s gun. 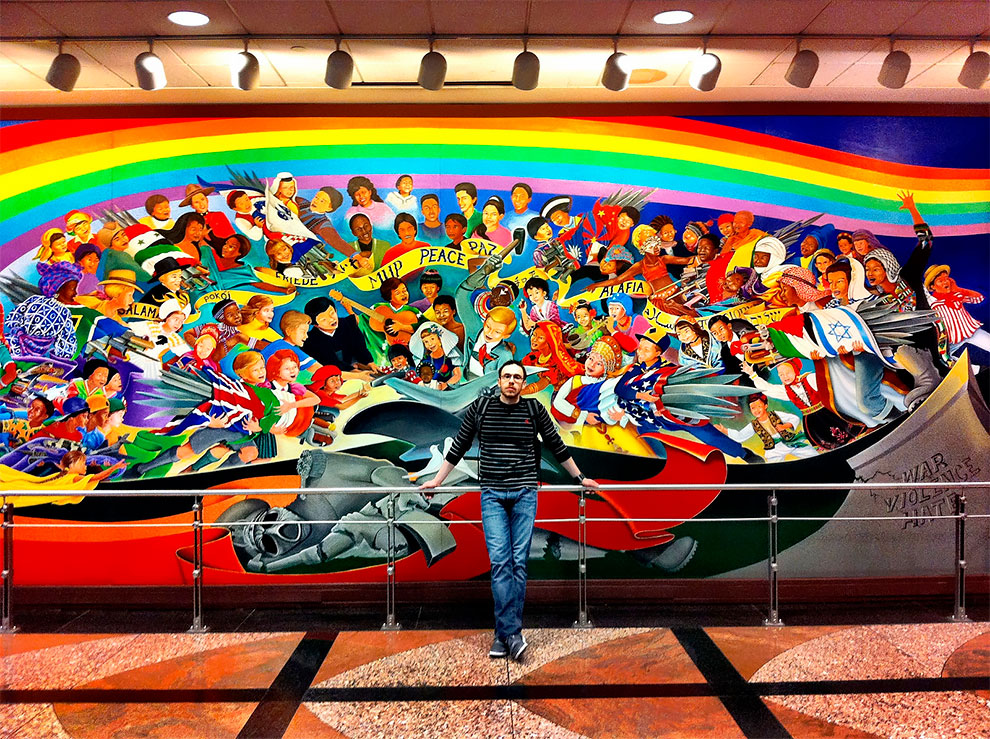 Tanguma gave a bit more of an explanation for this one in an interview with Zing Magazine, claiming that it depicts a biblical lesson from Isaiah and Micah: that it’s possible for nations of the world to stop war by joining together. He then goes on to explain that the children are dreaming of peace in a world filled with war. This falls in line with the many murals Tanguma has painted over the years, some found in elementary schools and others in prisons, many of which depict themes of growth through courage, multiculturalism, and environmentalism. 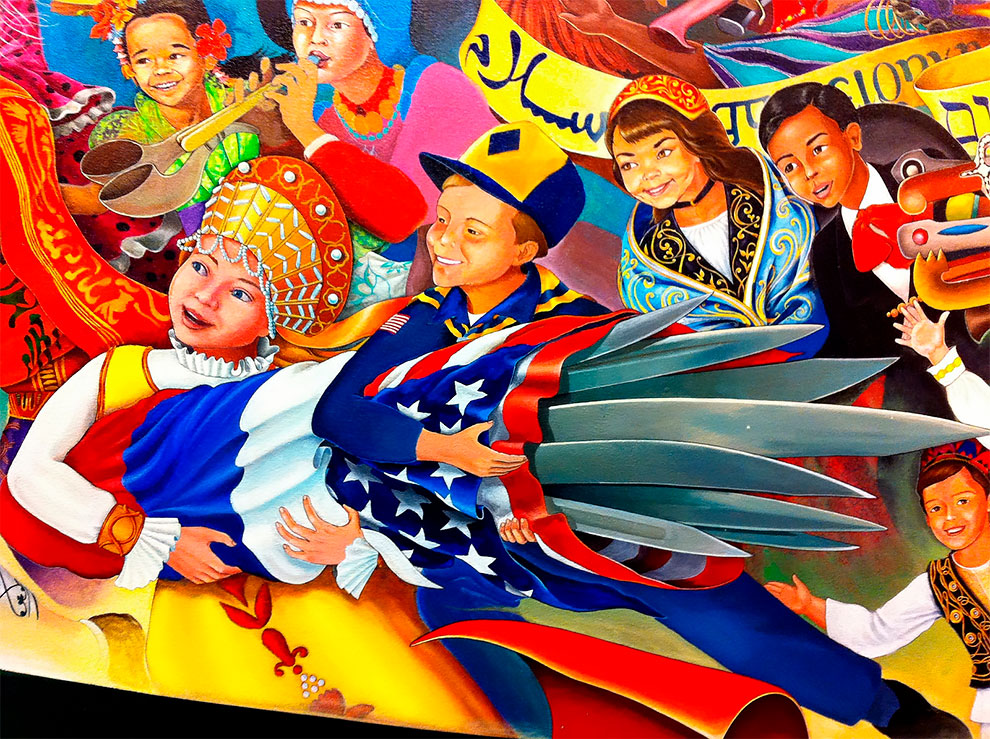 The larger (and happier) mural of this second set also has an important tie to Denver. While most of the children in the painting are clearly representative of various cultures around the world, a cluster of young people in ‘90s clothing can be found at the top center above the word “peace.” These faces are actually portraits of real Denver kids that died as a result of gang violence. 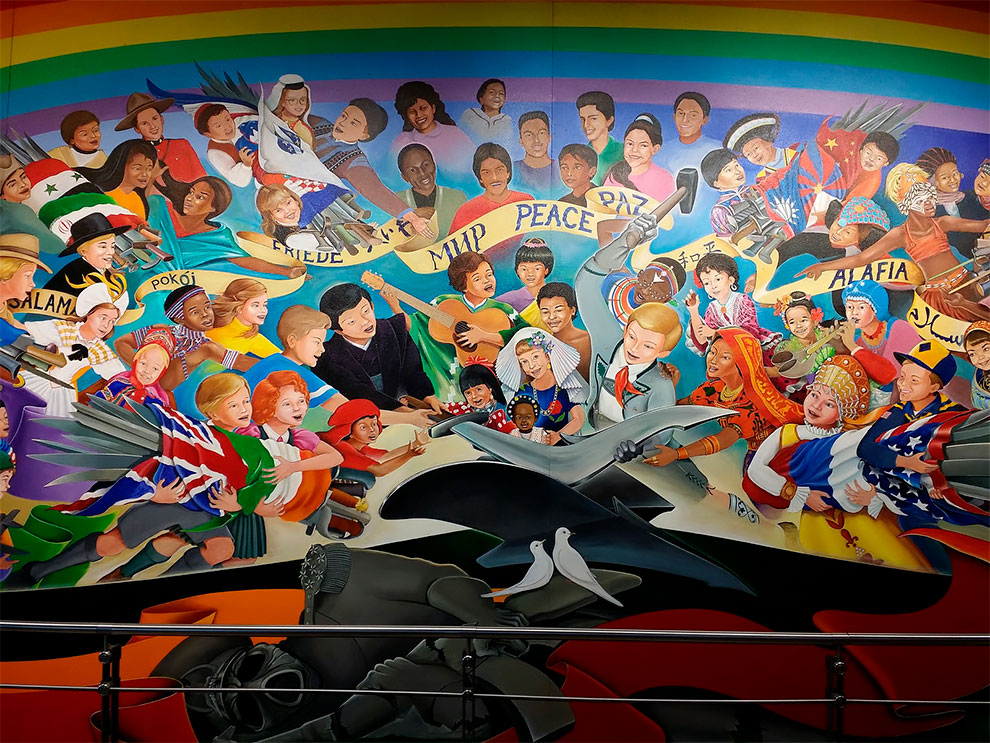 With artist Leo Tanguma (pictured with wife) representing Denver’s growing Hispanic community, while also being known for depicting socio-economic issues throughout his work, he would have been an ideal candidate in this scenario. It’s also possible that the artist was simply selected to create a piece that would stimulate conversation about the environment, diversity, and the pursuit of peace for years to come. 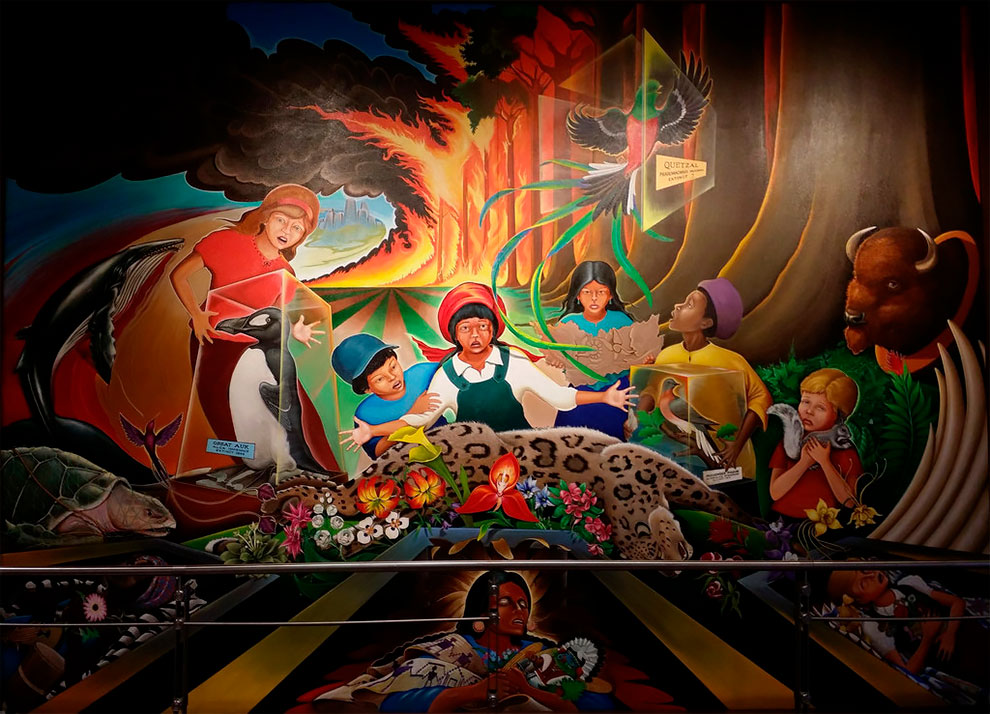 Additionally, with the grand lesson of the murals – that diverse cultures coming together can result in prosperity – still in mind, their placement at DIA might be a stroke of genius. After all, an international airport like the one found in Denver is perhaps home to more multicultural interaction than anywhere else in the country. People fly in from nearly every corner of the globe, forced to rub shoulders and share in the experience of travel. Perhaps Tanguma recognized this, knowing that his message would be seen by a more diverse collection of people here than anywhere else. Perhaps he believed that this placement would give his message the best chance of not only being heard, but also being adopted.

"This Brave New World": Stunning Digital Sci-Fi Concept Art By Jonathan Ching
Overdrive Magazine: Voice Of The American Trucker In The 1970s
Digital Artist Shows How Climate Change is Affecting Our World
YouTube Drawings
"Weedsomar": The Spiritual Worlds of Julian Majin
Artist Illustrates 12 Astrological Symbols Using Human Bodies As Her Canvas
Fully Tattooed, This Young Polish Man Is A Real-Life White Walker
“Irreversible Desire to Live”: The Superb and Breathtaking Sci-Fi Artworks of Fedor Barkhatov
The Chill And Retro Motion Pixel Art Of Motocross Saito
Any Functioning Adult 2020 Presidential Election Campaign Is Getting Popular
Artist Takes A Critical Look At Modern Society And Calls Attention To Problems In Today’s World With His Thought-Provoking Illustrations
Comics In The Kitchen: Humorous Illustrations By Massimo Fenati
Stunning Pictures Of People Accidentally Found Their Doppelgängers In Museums And Couldn’t Believe Their Eyes
Artist Jamie Paul Scanlon Creates Stunning Street Art Inpired By Pop Characters And Horrror Movies
Traveler Leaves Hilarious Graffiti Hidden For Hotel Guests In Rooms He Has Stayed In Over The Last 11 Years
An Artist llustrates The Sad Truth Of Modern Life: Thought-Provoking, Clever And Funny Illustrations By Marco Melgrati
Artist Transforms Quotes From ‘The Mandalorian’ Season Two Into Retro Movie Posters
This Is What Disney Princesses Look Like In Their Old Age
Brazilian Illustrator Tullius Heuer Brings Images To Life
A Visit to the World of Medicine: The Whimsical Art of Jose S. Perez
Beautiful Award-Winning Photos Of The HIPA Contest That Will Make You Appreciate The Natural World
Meet Batgirl, The Daredevil Teen Who 'Flies' On The Tops Of Trains During Moscow's Rush-Hour
Designer Ji Lee Makes Clever Calligrams That Visualize The Meanings Of Various Words
Someone Created Words To Describe Weird Things And Situations
airport, apocalyptic, colorado, mural