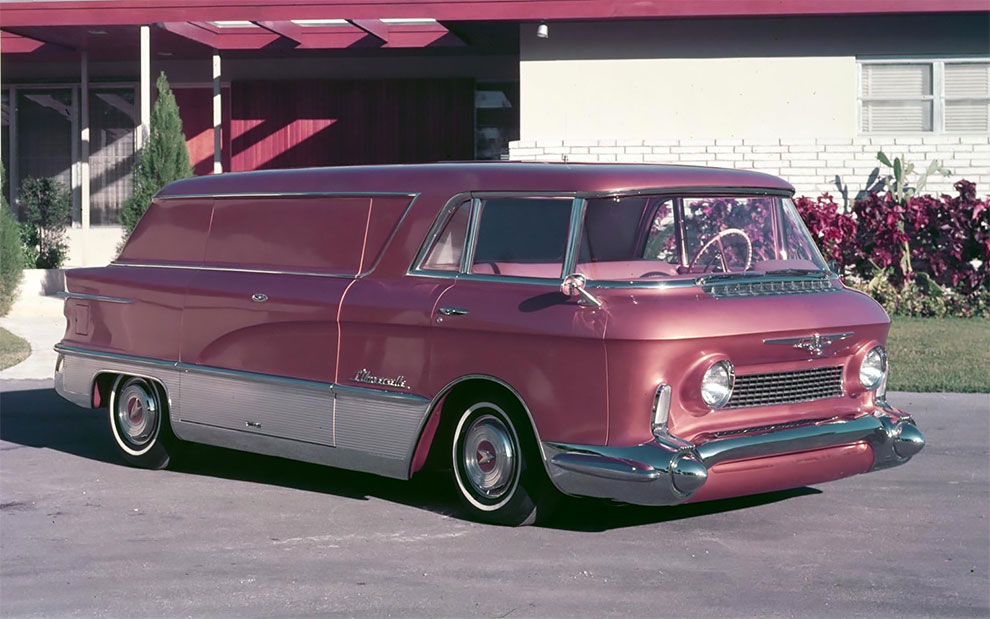 One of the most popular General Motors design concept models designed under the direction of Harley Earl was the 1955 GMC L’Universelle show van. The name “L’Universelle” is French and means “The Universal.” The model was a part of the Motorama shows during the 1950s, which created a huge buzz among crowds at the time. 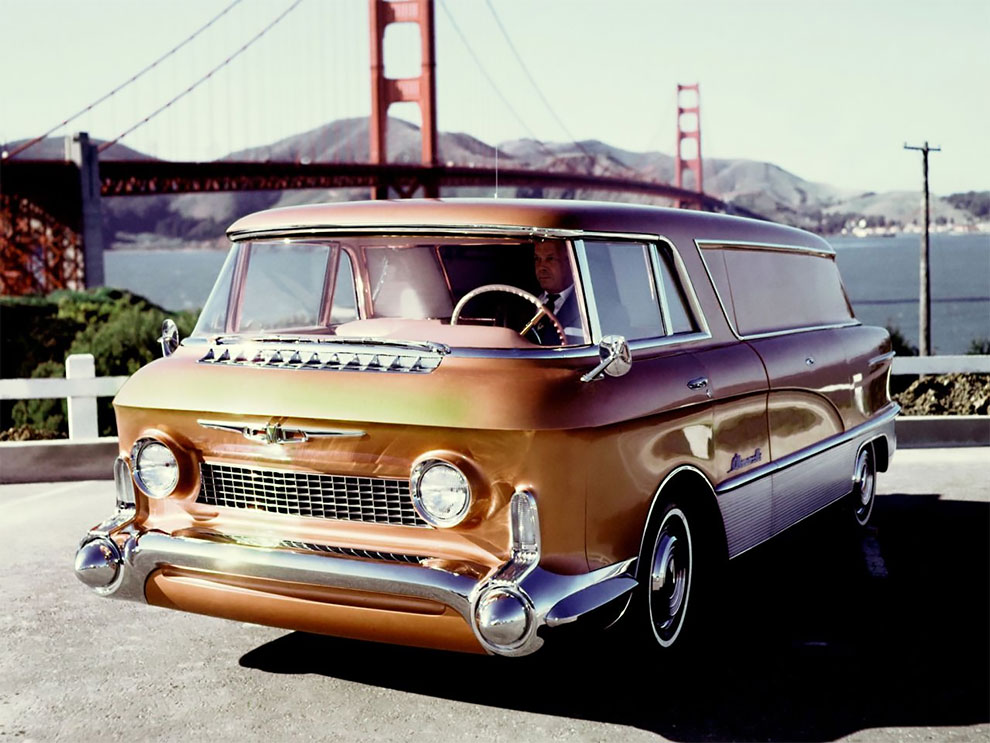 In January of 1955, GM debuted its ’55 L’Universelle show van at the Waldorf Astoria Hotel in New York, at the opening of that year’s Motorama. Though not a conventional “dream car” as one would normally find at the Motorama, it nonetheless shared the same level of innovation as the one-offs displayed by the General’s other divisions. Moreover, the bronze-colored van shared many of the same Harley Earl-inspired design elements used on both production and non-production GM cars of the time. 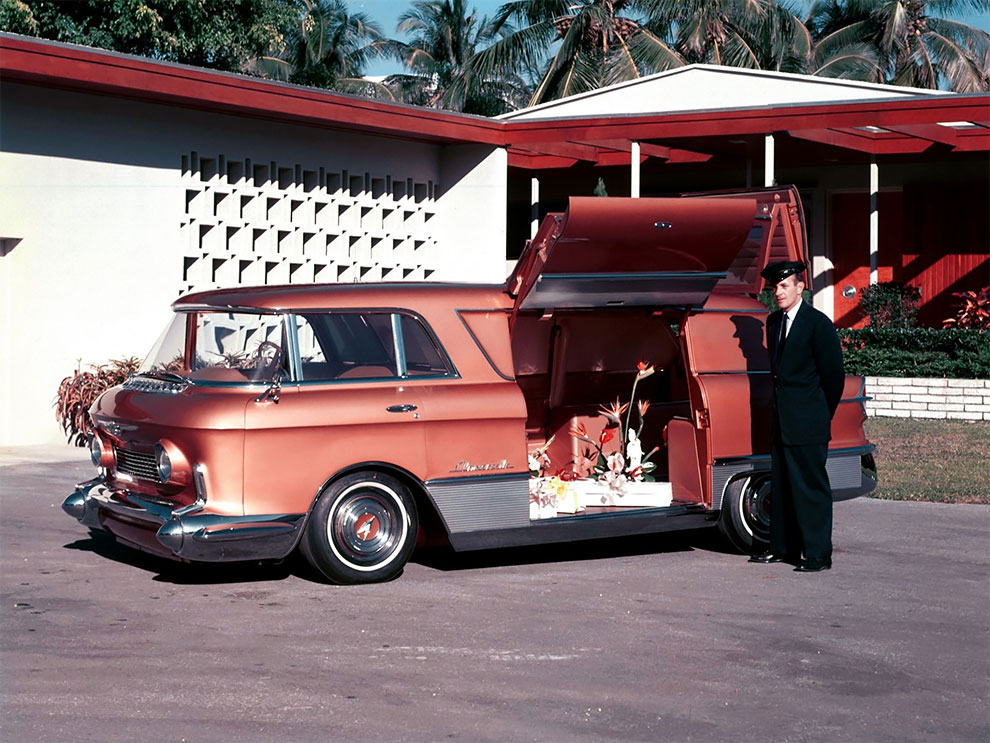 The L’Universelle concept model was designed under the direction of Charles Jordan, a creative and talented automotive/truck designer. Jordan, who had worked in the GMC studio, became one of GM’s youngest and brightest designers, creating many successful projects during the 1950s. The L’Universelle project started out as a box design with the engine positioned up front followed by a big box interior design for the driver and cargo area. The interior was designed around the engine, which had allowed a certain separation of the cargo area from the driver’s cab area. 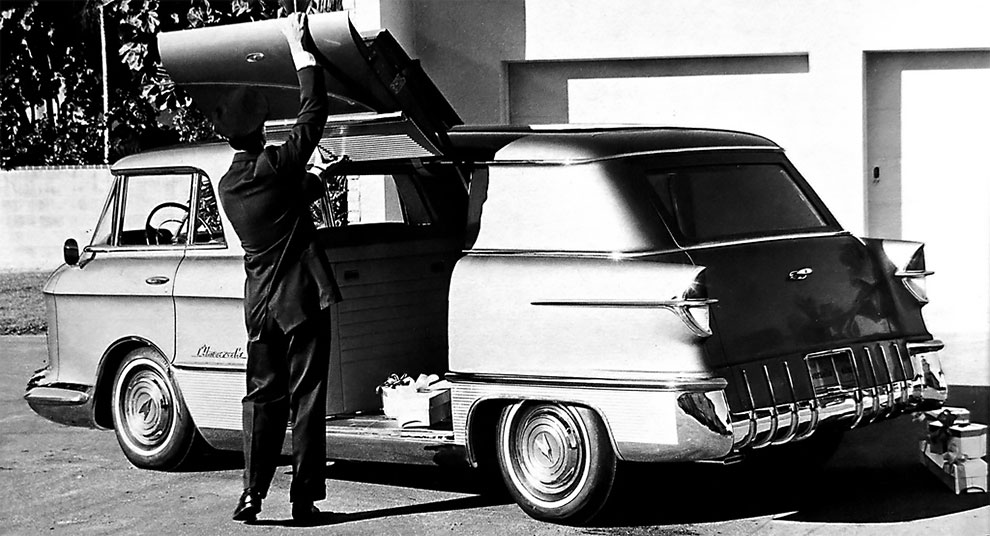 Jordan along with many other GM design team employees, created a monospace form with large chrome bumpers and a compact style. Some automotive historians have said that the L’ Universelle show model offered a strong character line wrapped around the front and continuing along the sides before curving down to the rear wheels. The model also offered a panoramic windshield design, which became very popular on many vehicles during the 1950s. The front-end design offered the same look that found on passenger vehicles. The show truck also offered twin side doors which could open in a gullwing design for the driver or passengers. 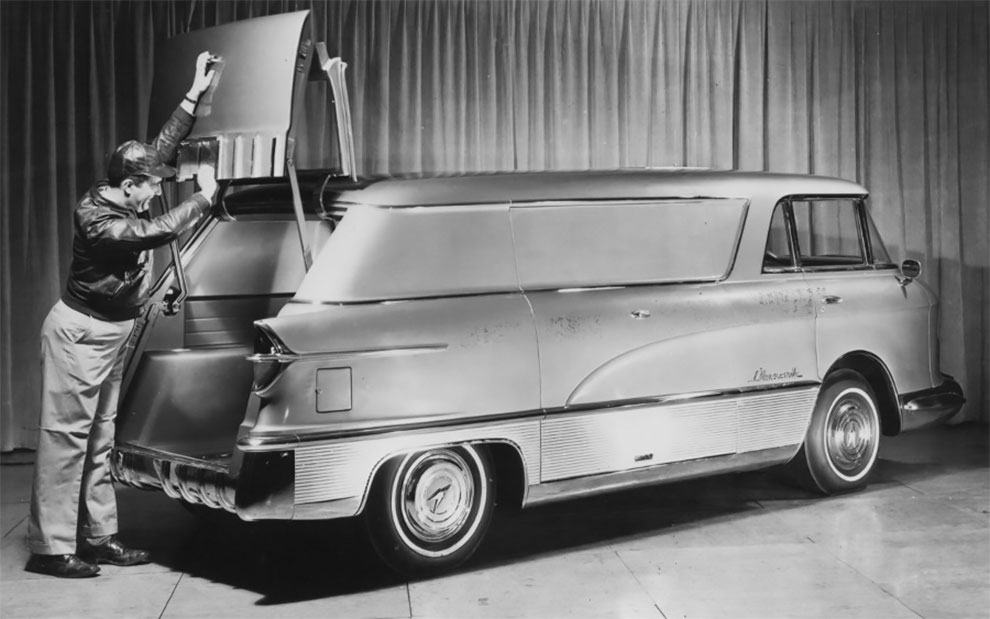 Another person that was a part of the L’Universelle project was Philip Monaghan, the vice president and general manager of the GMC division at the time, who said, “The basic design of the L’Universelle is a panel delivery; minor manufacturing changes can convert it into a small bus, taxi, station wagon, or sportsman’s car.” 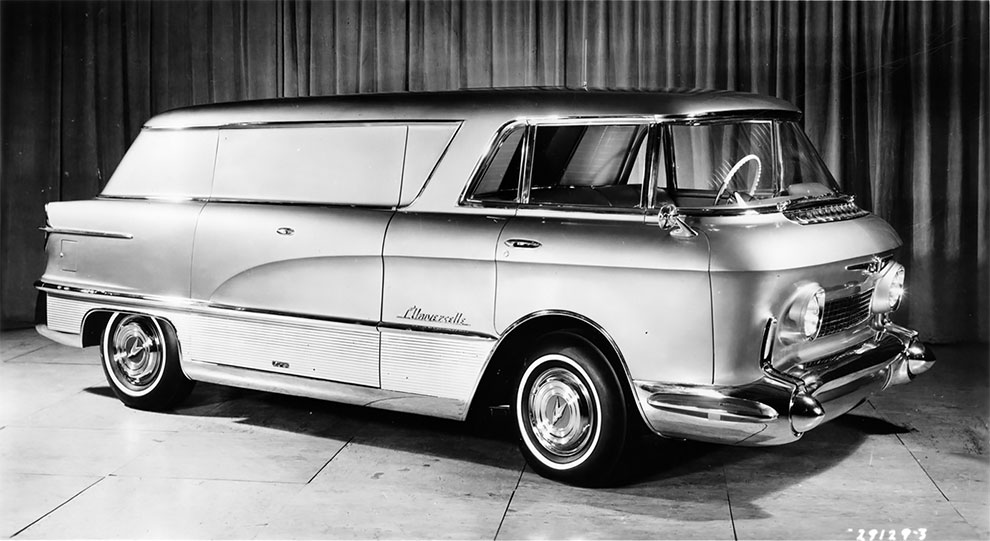 Although the concept truck was unveiled at the Motorama show in 1955, it never saw production. However, the L’Universelle concept did influence other Chevrolet truck designs during the 1960s. For example, the first passenger compact van by Chevrolet, the Greenbriar Corvair model, used a lower interior space design for passenger comfort and safety that came from the L’ Universelle. 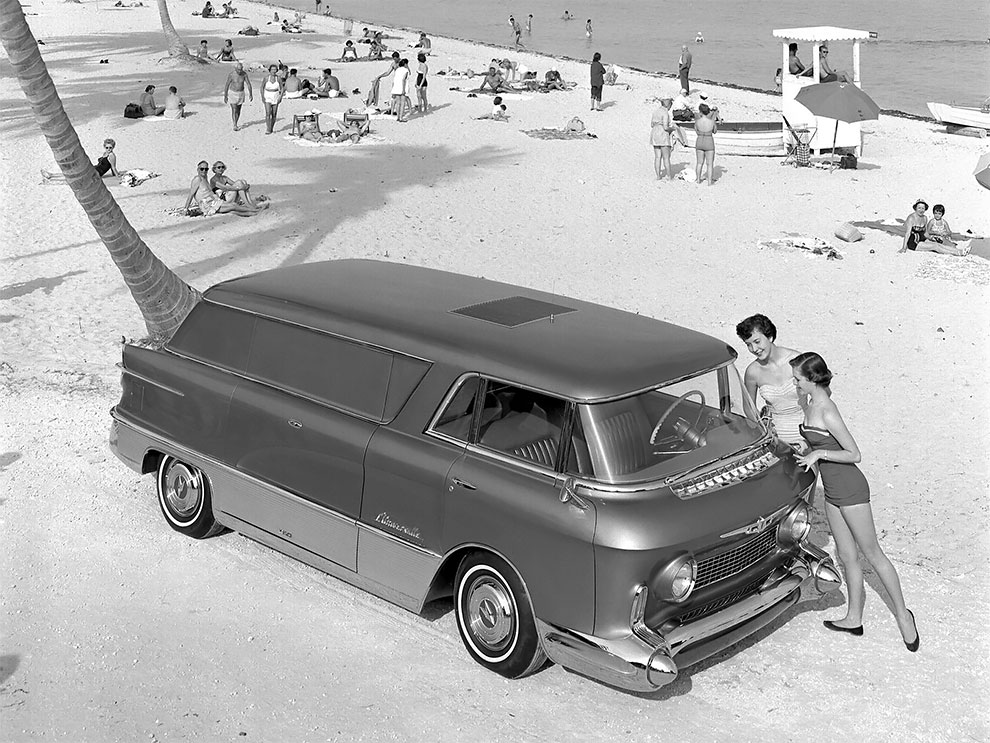 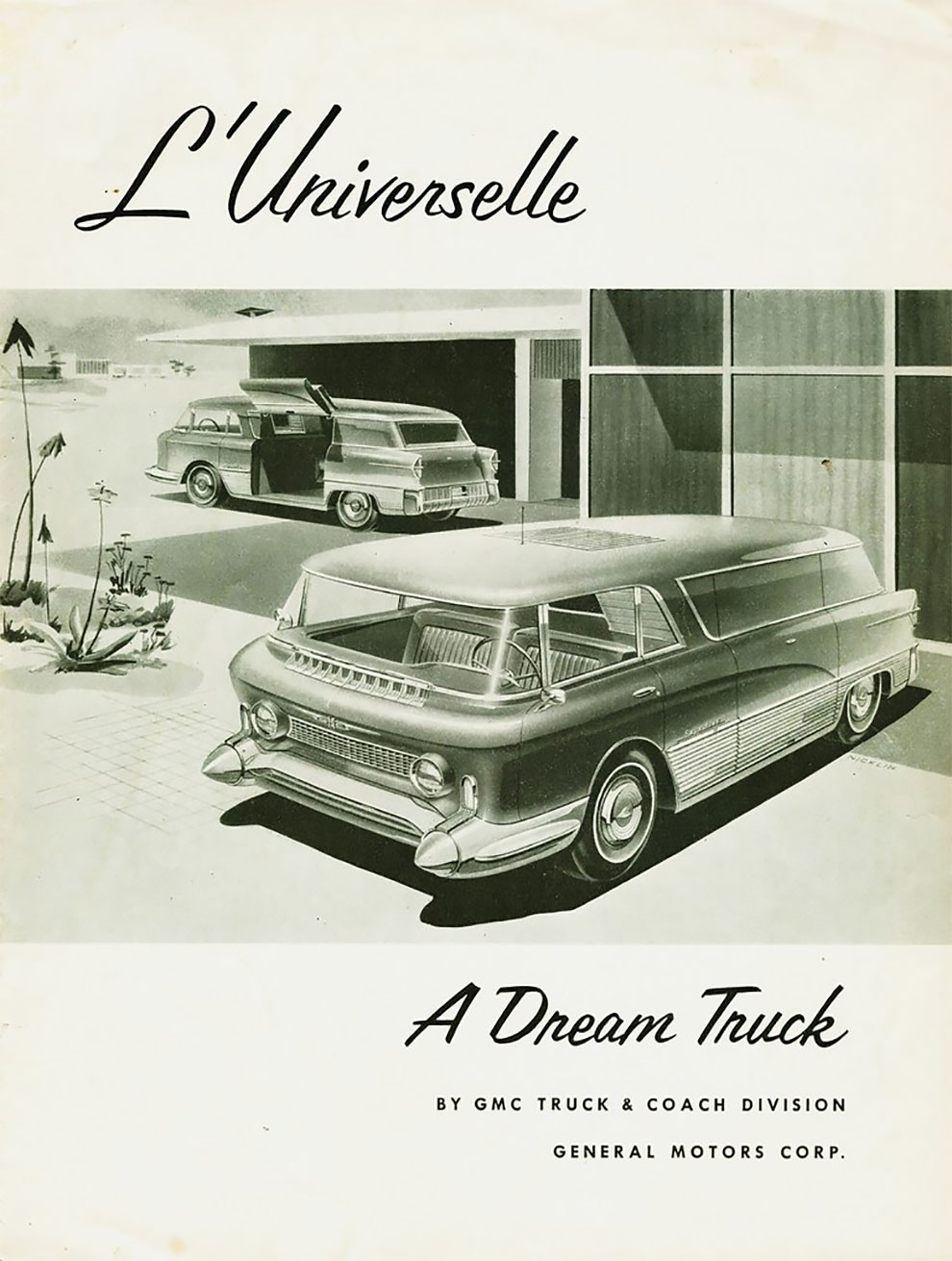