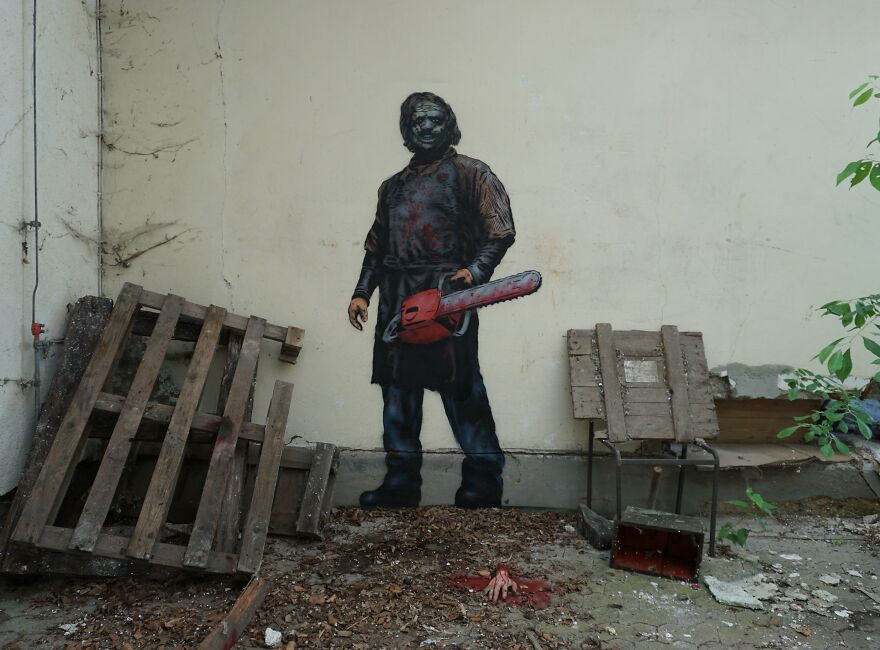 Somewhere in rural Germany, hidden by trees in the middle of an idyllic valley, lays an old, abandoned factory. The ravages of time gnaw on the buildings, and nature slowly takes back over what was once booming industry. 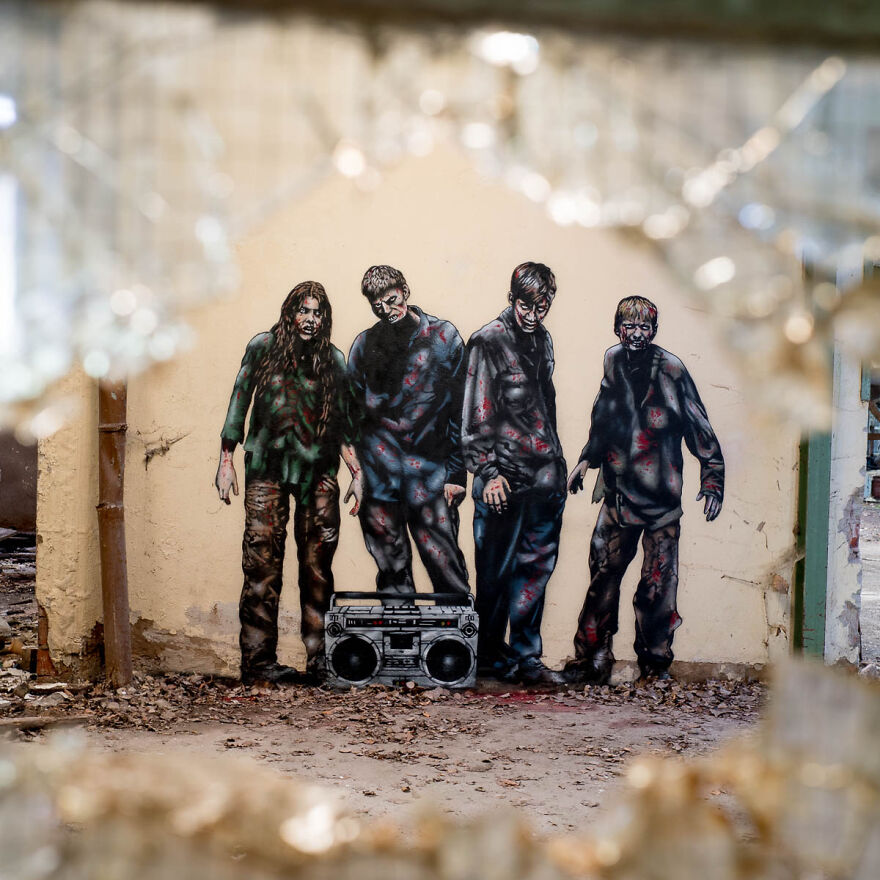 The place was left for decay in 2009, and until now, not much has happened there. Now and then, especially on the weekends, a few “urban explorers,” or “urbexers” in short, are brave enough to ignore barriers and signs and sneak into the buildings. 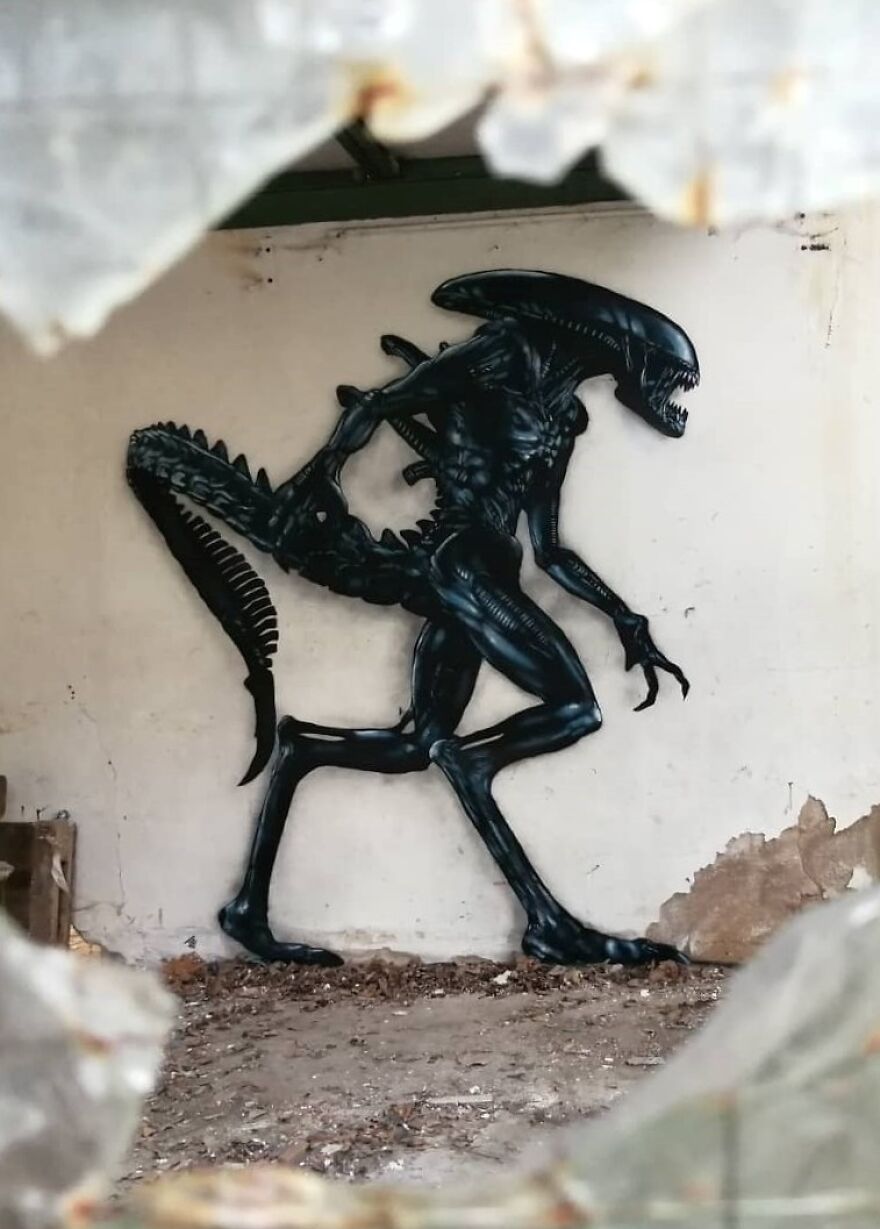 But to their surprise, nowadays they not only find rotten furniture, broken glass or rusty machines, but they also find something way more special. This place in the middle of the forest is no ordinary lost place—it’s a hidden gallery with breathtakingly realistic artworks thanks to a street artist who decided to breathe life into long-forgotten buildings. 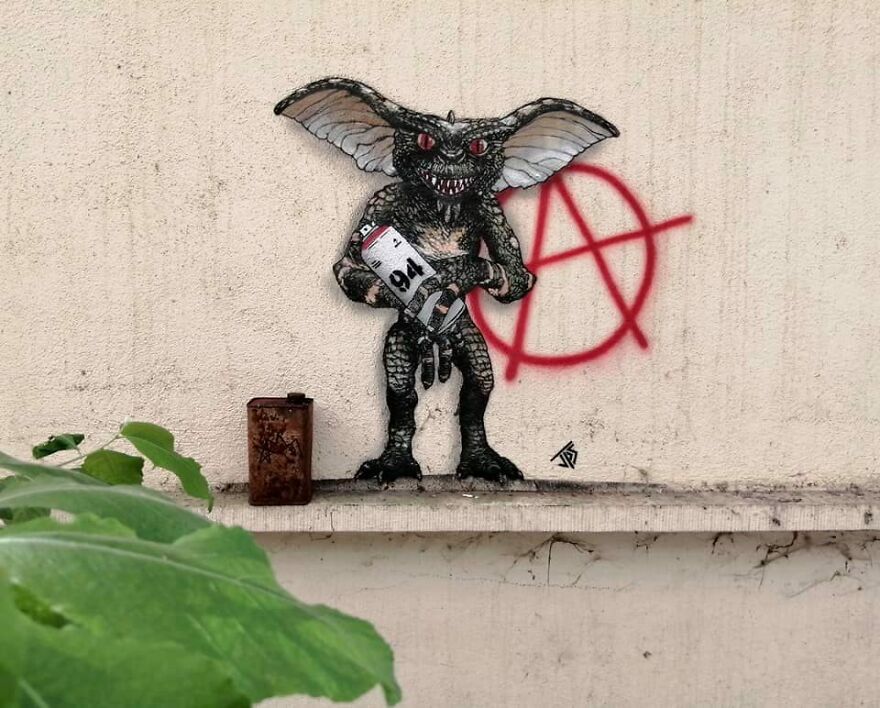 The artist mentioned above is the international street artist JPS, whose real name is Jamie Paul Scanlon (previously featured here, here and here). He is known for various projects worldwide—for example, turning an abandoned mental hospital in the UK into a destination for art lovers—and his followers know he’s drawn to abandoned places. With his unique painting style using stencils and freehand, the self-taught British artist manages to bring his artworks to life.

Even though the range of his works is widespread, everyone who’s followed his art over the years knows he’s a fan of classic horror and movie characters—and this love shows in the hidden gallery which was named Graff Endorsed. 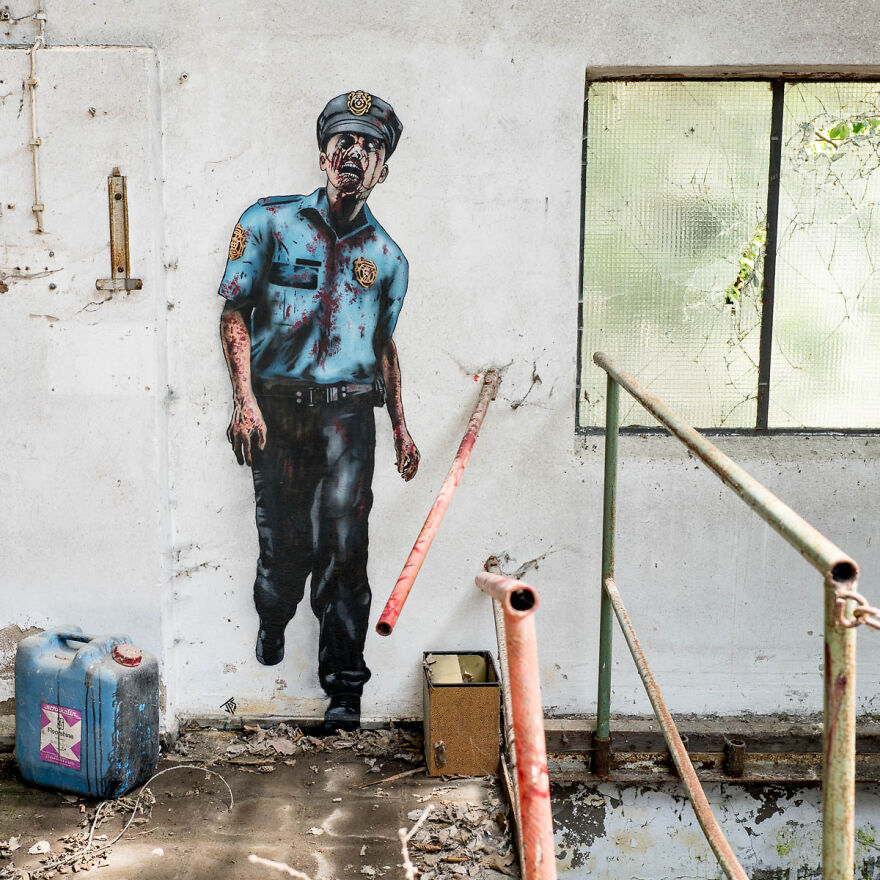 In just a few weeks, he created an exhibition that can be described as a dream or a nightmare. Some visitors may not even dare to enter the place after being greeted near the main entrance by a hoard of bloody zombies lurking through a broken window at the main entrance. Others may be brave enough to stumble over an almost 2-meter-high xenomorph from Ridley Scott’s “Alien” or to find the little evil grinning gremlin with a can of spray paint.

And if blood and horror movies aren’t scary enough—then maybe the shark which can be spotted through a hole or the massive spider casting a shadow on the wall gives the visitors goosebumps.

Don’t Look Back In Anger, By Jps 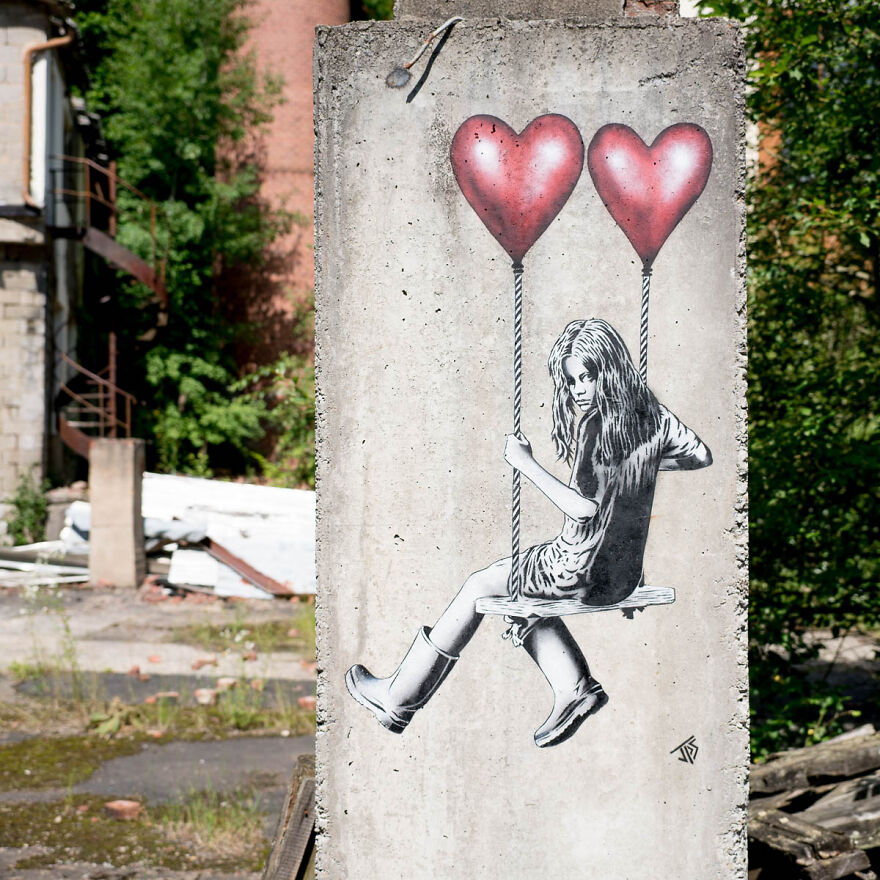 So far, you can discover over 30 artworks by JPS in all sizes at Graff Endorsed—and the numbers are rising continuously.

Different from the hyperrealistic artworks are the installations by a young artist called Rage. These installations—built solely from material found on site—are either just breathtaking or thought-provoking. 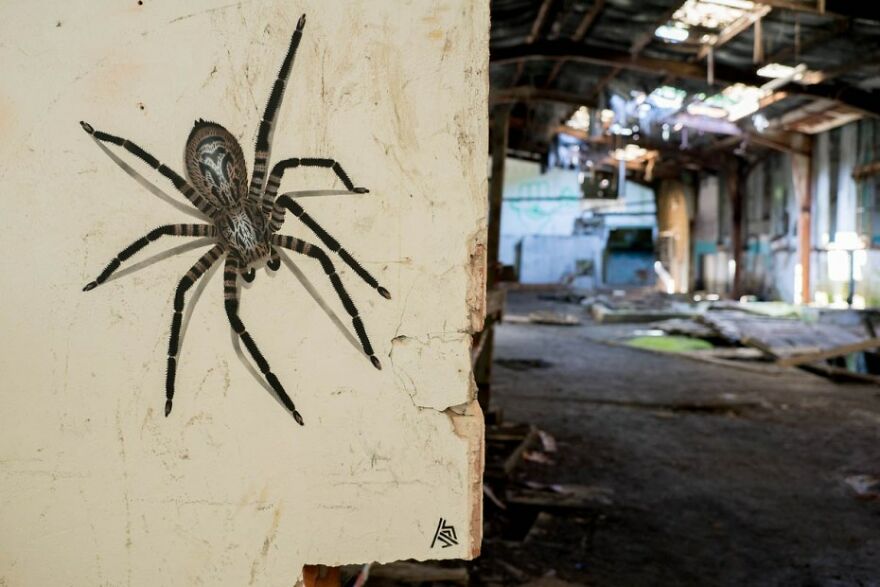 From Cell 5 (a detailed reconstruction of a police cell in which a refugee burnt to death in 2005 under mysterious circumstances) to various card houses made with doors of the abandoned building, his artworks are surely special and unique.

Long story short: Graff Endorsed is a fascinating and unique permanent and growing art exhibition by JPS and Rage and definitely worth a visit—if you know someone who knows where to find it. 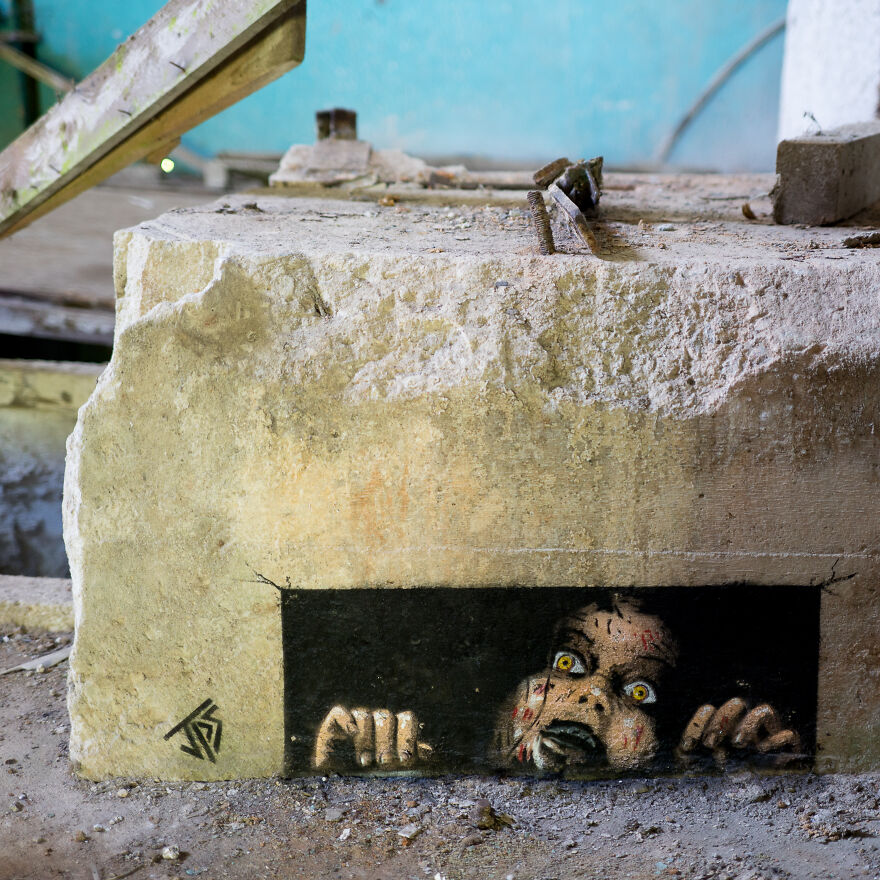 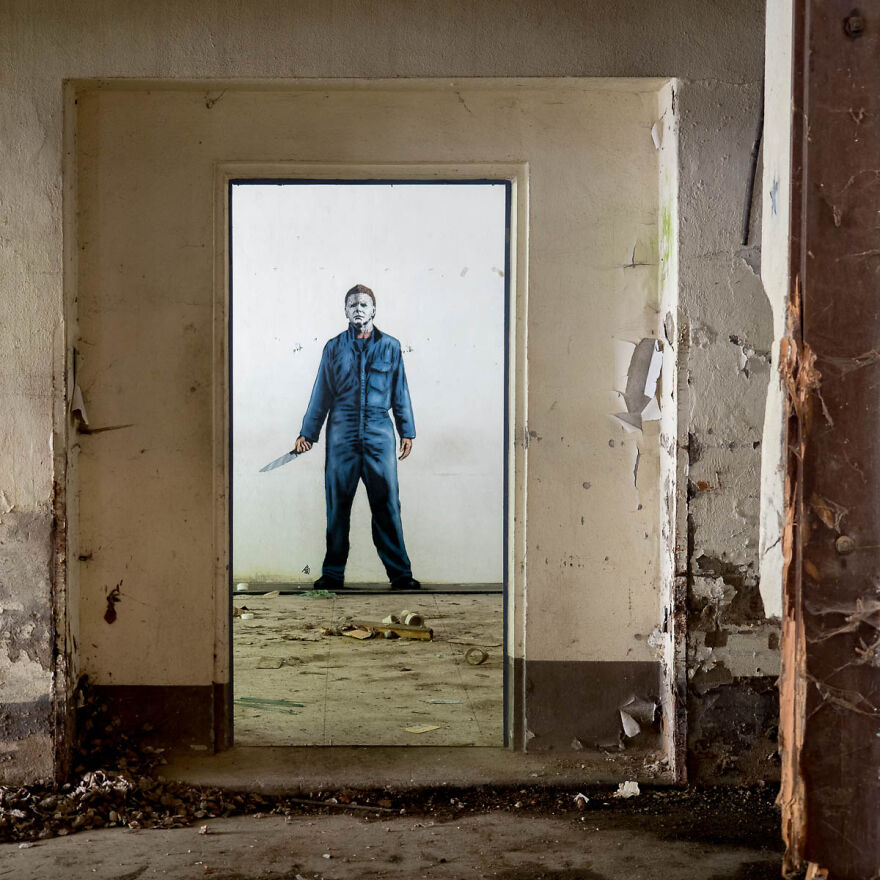 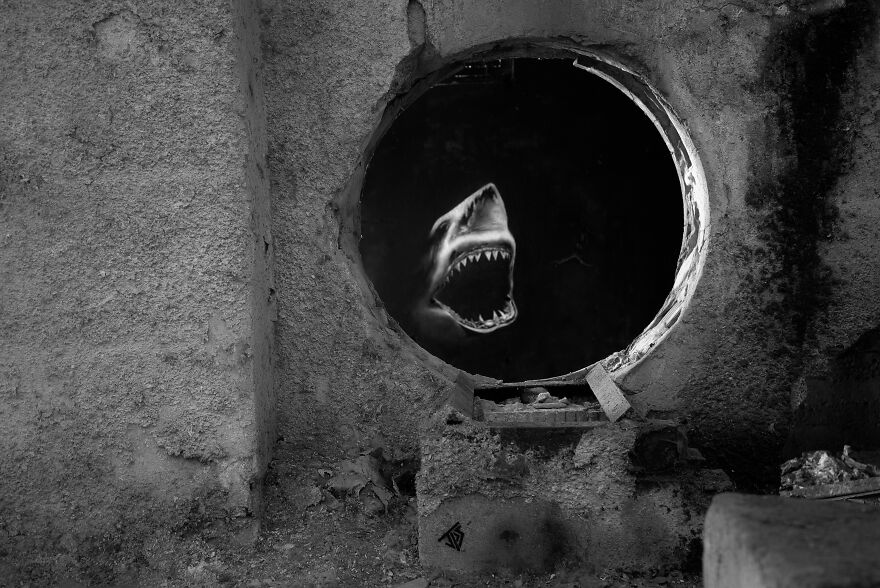 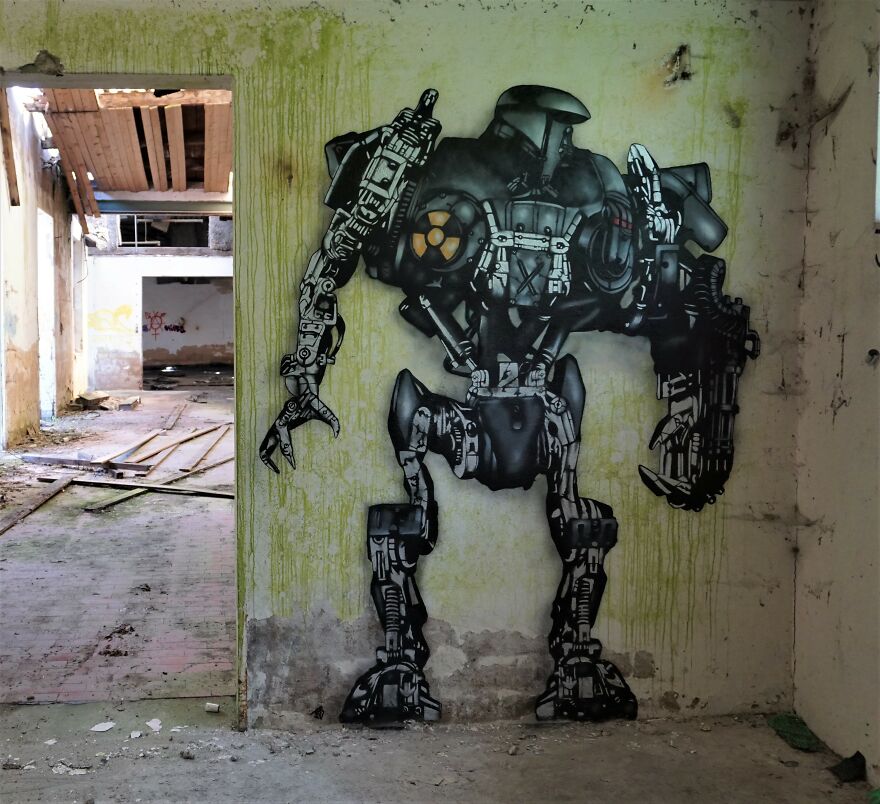 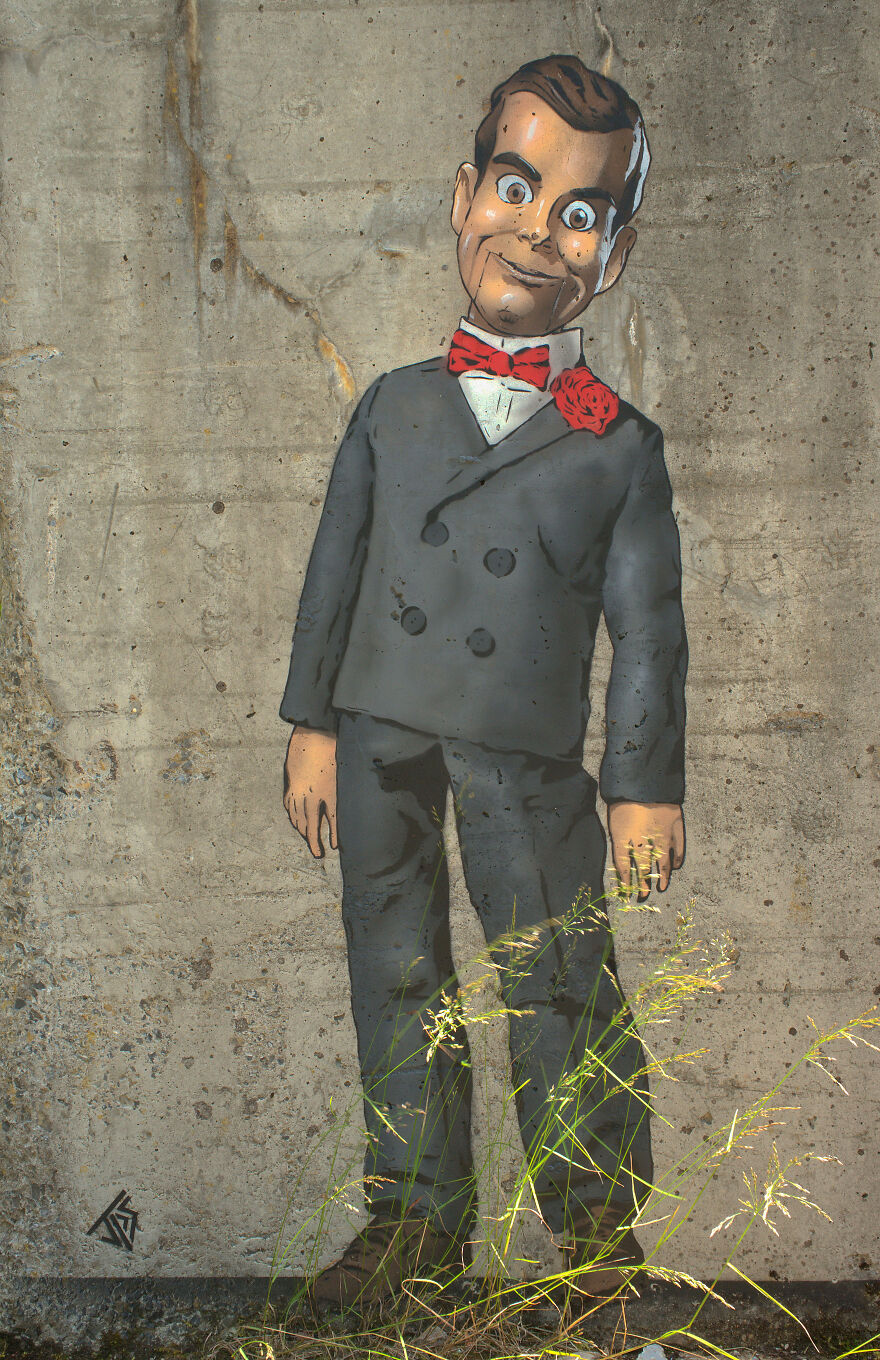 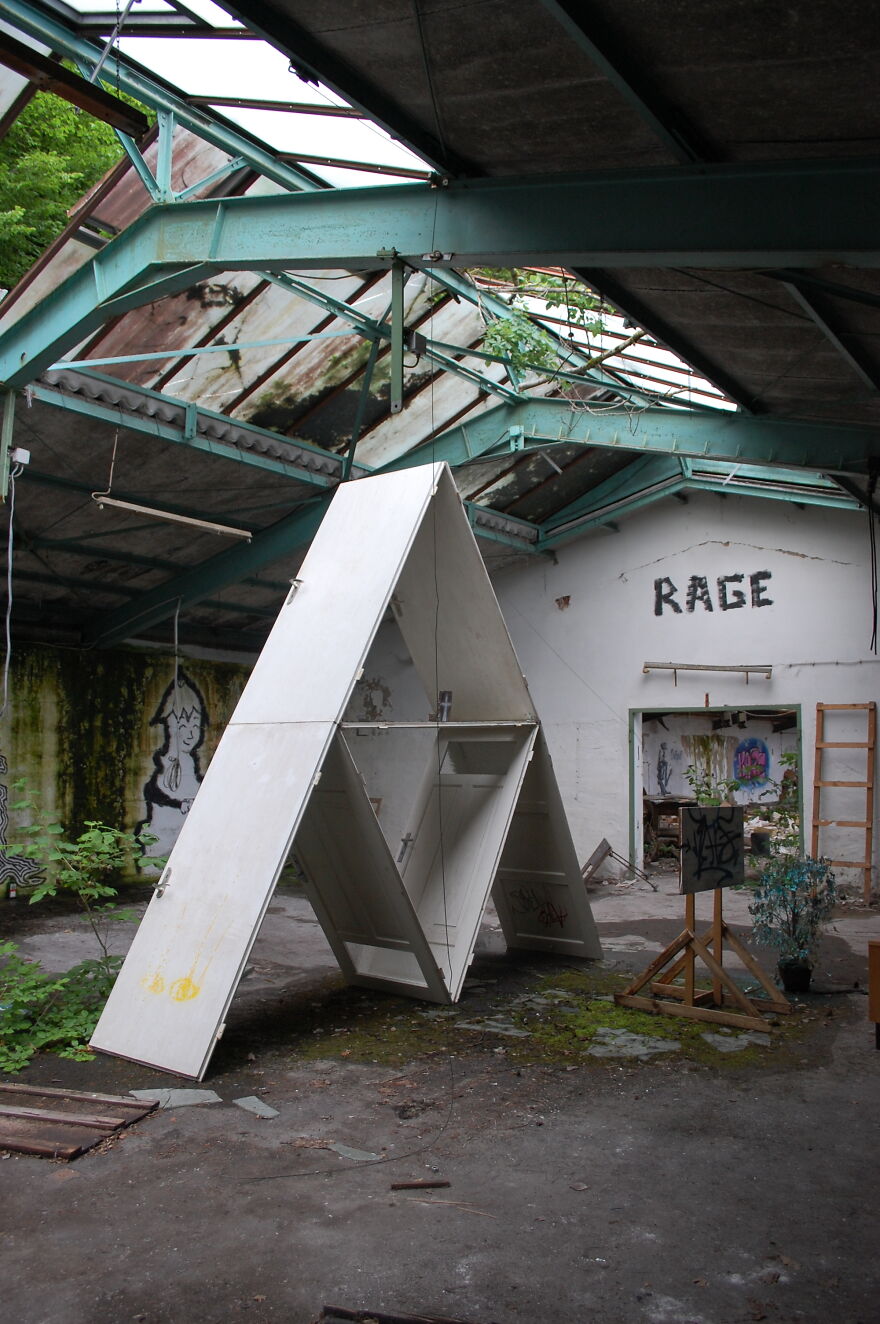 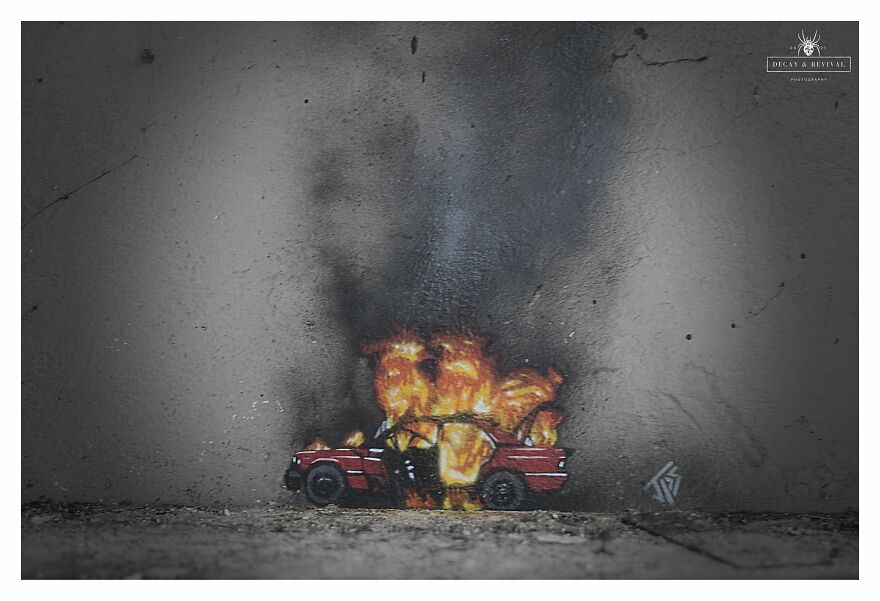 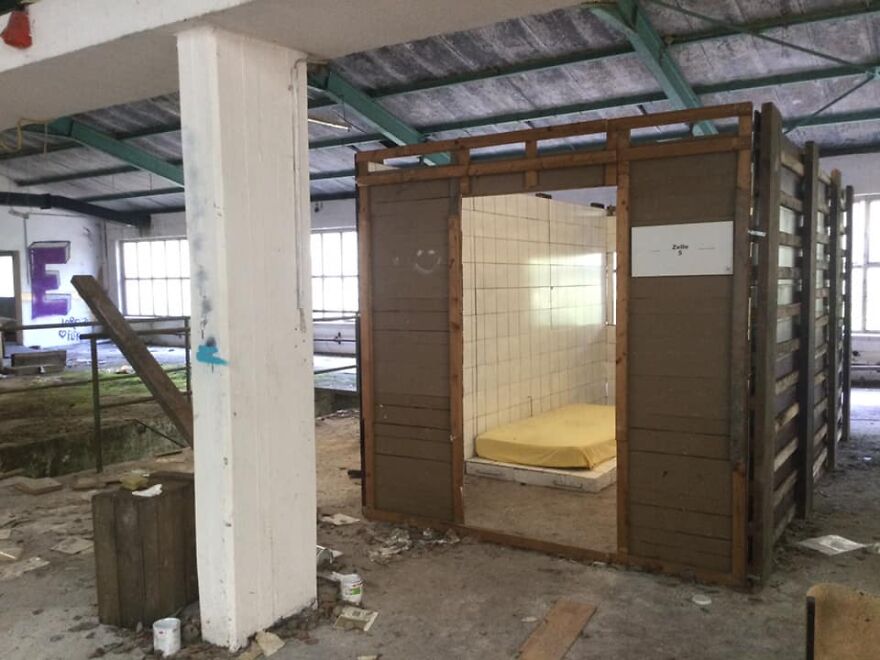 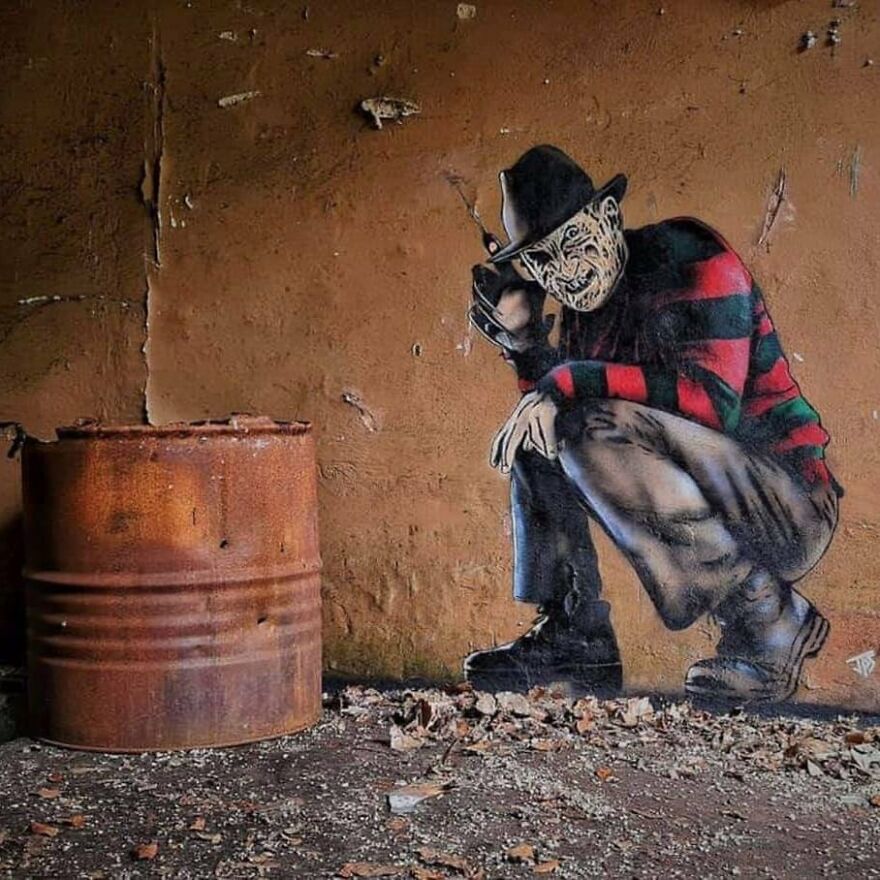 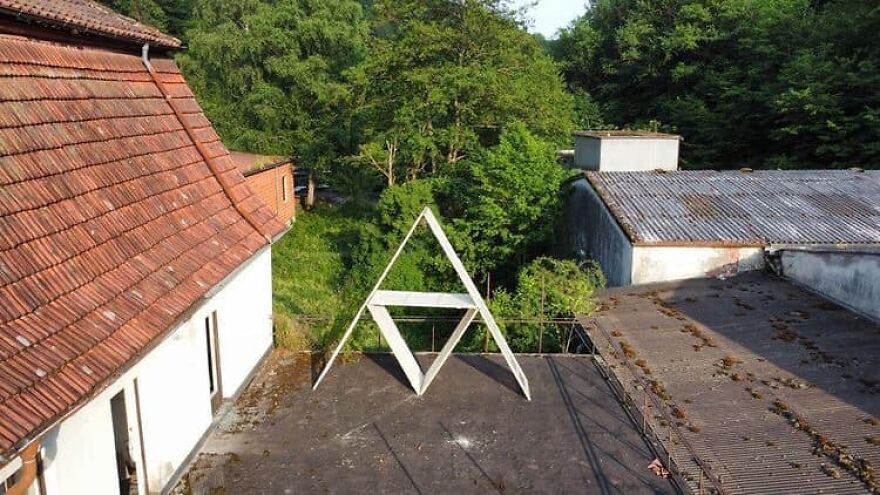 Random Facts About The World That Might Change Your Perspective On Certain Things
Artist Turns Ordinary Everyday Objects Into Star Wars Characters
Design Works of Elena Lazutina
SUPER SODA POPS by Chungkong
"If We Are Gonna Perform Inception Then We Need Imagination": Surreal Photo Manipulations By Sergey Dryutskiy
Explaining The Worst Pandemics In History
"Somewhere Somehow": The Superb Dark and Surreal Photoworks of Lidija
Talented Mum Creates Epic Napkin Art For Her Kids Lunch
Beautiful Award-Winning Photos Of The HIPA Contest That Will Make You Appreciate The Natural World
Ukrainian Warrior Cats by Julia Pod
"From The Outside To Nowhere": Surreal, Depressive And Outstanding Digital Artworks By Dmitry Bogolyubov
Saraiva Pocket Books
This Artist Delivers “The Good News” With Upbeat Street Flyers
Lithuanian Artists Creates A Tiny Urban Project With City Signs
Stunning Illustrations By Michal Lisowski That Will Make You Think How Fragile Our Life Is
Turkish Artist Hossein Diba Creates These Creepy Realistic Recreations Of “The Simpsons” Characters That Will Give You Nightmares
No-Shave Movember: Disney Princesses with Beards
"The Darkness That Comes Before": The Mind Blowing Sci-Fi Art Of Brad Wright
"Distant Rain": Superb Stylish & Neon Illustrations By Igor Piwowarczyk
"Eye In The Sky": Breathtaking Digital Paintings Of Skies By Alexander Rommel
Taiwanese Artist Creates An Epic Blue Mountain-Scape, As A Result Of Hundreds Of Image Layers
Photoshop Master Showed Why We Should Not Believe Photos In Social Networks
Artist Creates 17 Illustrations To Reflect On Our Lives During The COVID-19 Crisis
11 Tips For Housewives Trying To Be Sexy In The 1930s
duo, germany, jps, rage, streetart