“If One Can Anyone Can All You Gotta Do Is Try”: Powerful Art Works Of Faith Ringgold, A Painter, Author And Civil Rights Activist – Design You Trust
≡
d
Photo
Architecture
Inspirations
Design
Tech
Animals
Travel
Hosting
Facebook
Inspirations

“If One Can Anyone Can All You Gotta Do Is Try”: Powerful Art Works Of Faith Ringgold, A Painter, Author And Civil Rights Activist

Faith Ringgold was born Faith Willi Jones in 1930 in the Harlem neighborhood of Manhattan. Her mother, a fashion designer and seamstress, encouraged Faith’s creative pursuits from a young age. Ringgold earned a bachelor’s degree from City College of the City University of New York in 1955. She then taught art in New York City public schools and worked on a master’s degree at City College, which she completed in 1959. 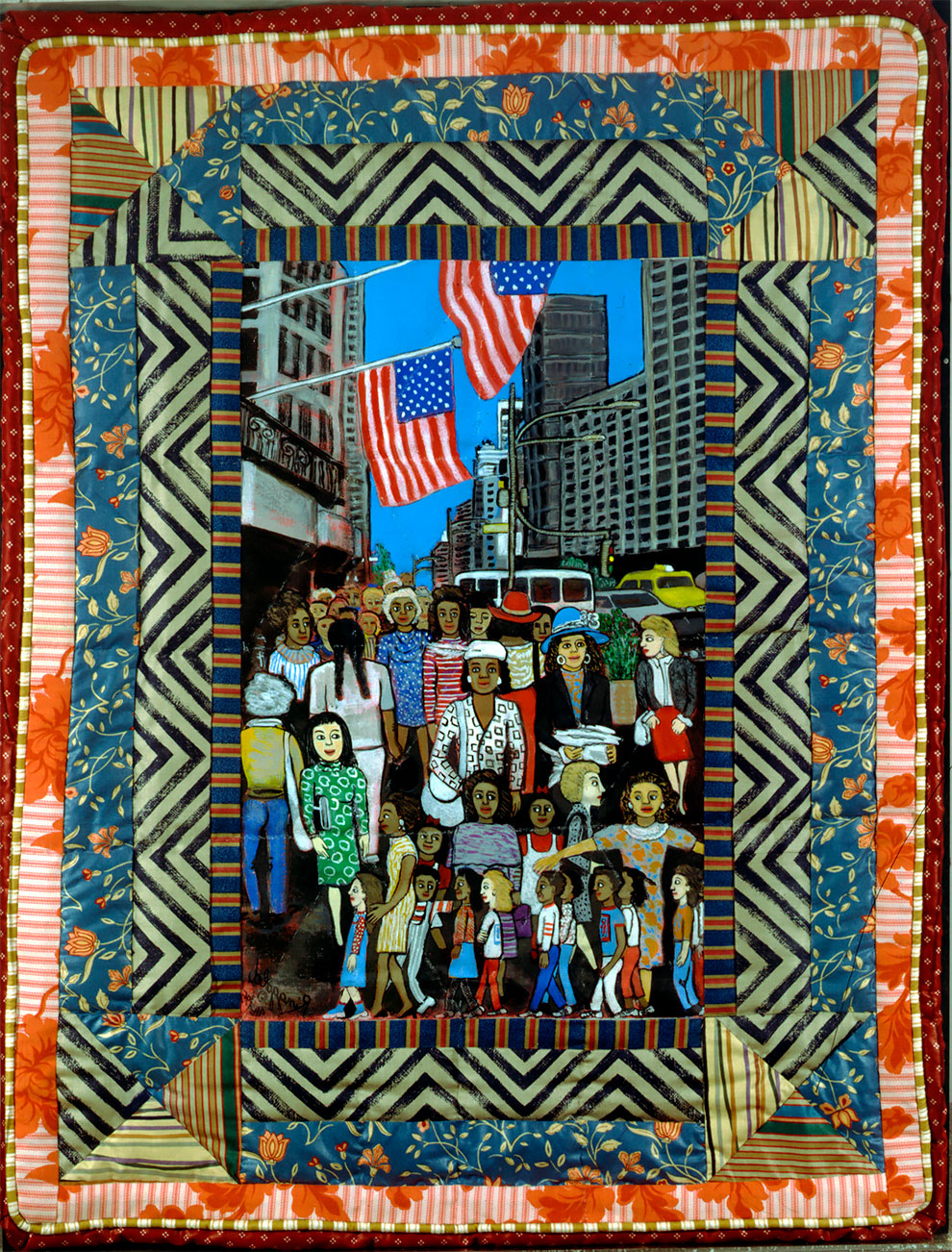 Ringgold’s oil paintings and posters begun in the mid-to-late 1960s carried strong political messages in support of the civil-rights movement. She demonstrated against the exclusion of black and female artists by New York’s Whitney Museum of American Art and the Museum of Modern Art in 1968–70. She was arrested for desecrating the American flag in 1970 as a participant in The People’s Flag Show, held at the Judson Memorial Church in New York. Ringgold cofounded Where We At, a group for African-American female artists, in 1971. 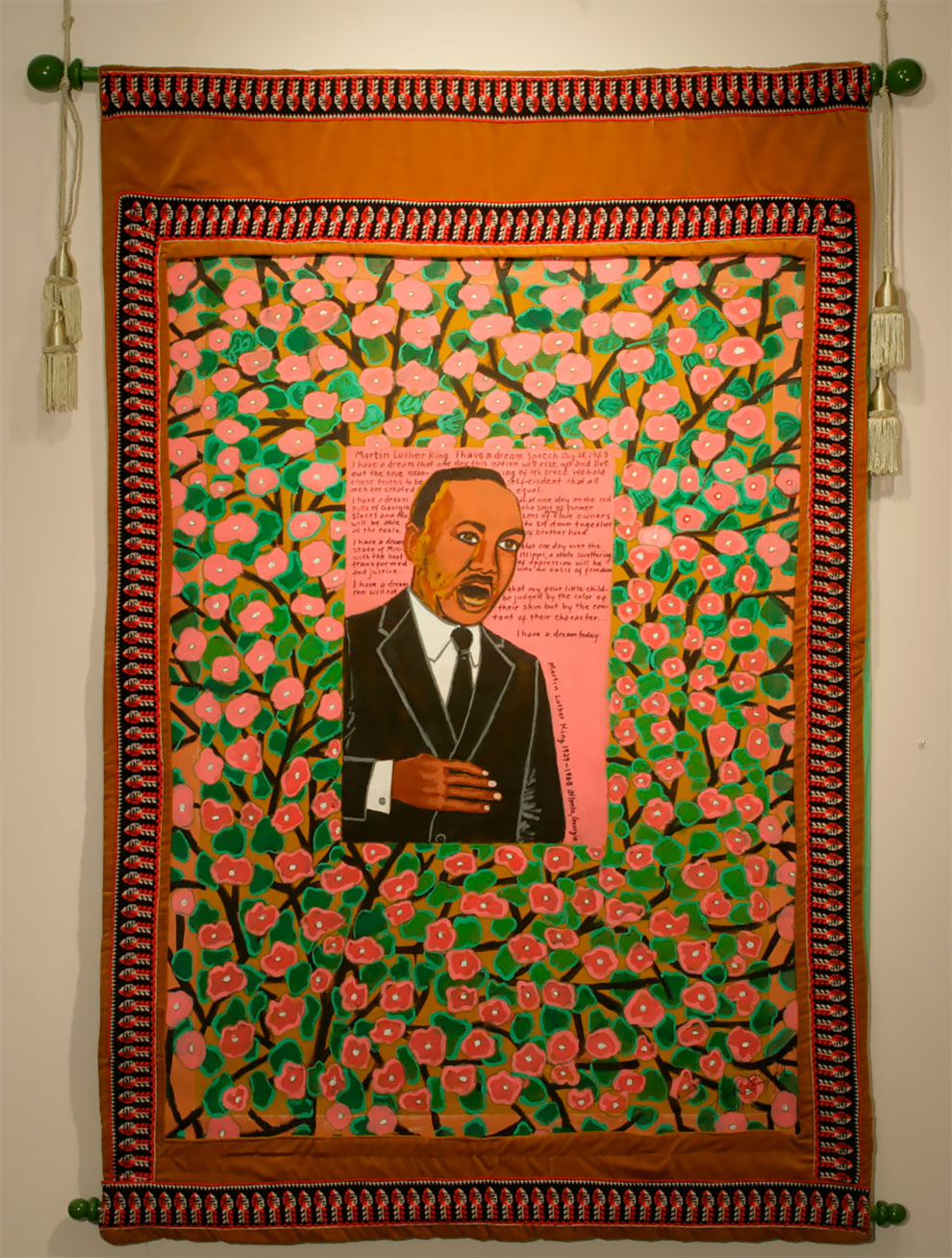 In 1970 Ringgold began teaching college courses. In 1973 she quit teaching in New York City public schools to devote more time to her art. In the early 1970s she abandoned traditional painting. Instead, Ringgold began making unstretched acrylic paintings on canvas with lush fabric borders like those of Tibetan thangkas. She worked with her mother, Willi Posey, to fashion elaborate hooded masks of fabric, beads, and raffia, which were inspired by African tribal costume. She also began making fabric “dolls” and larger stuffed figures, many of which resembled real individuals. Ringgold used some of these works in Performance pieces—the earliest of which, Wake and Resurrection of the Bicentennial Negro, was first performed in 1976 by students using her masks, life-size figures, and thangkas, along with voice, music, and dance. In 1976 and 1977 she traveled to West Africa. 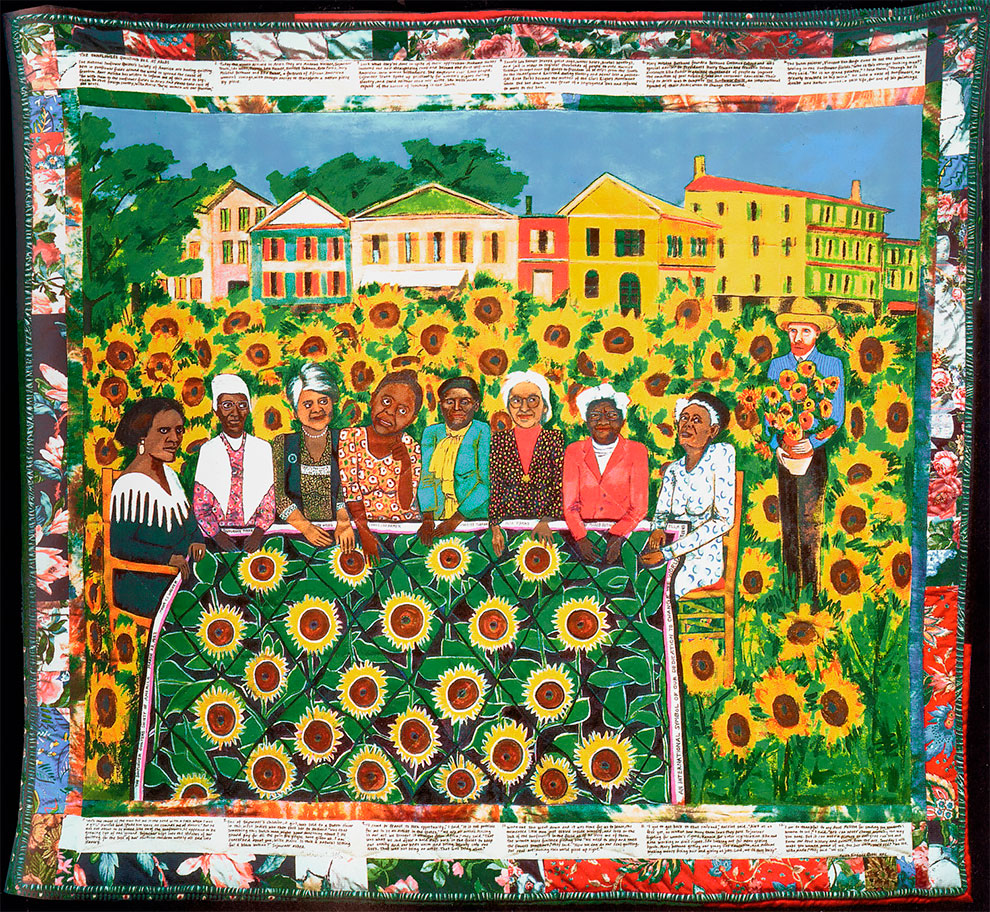 Ringgold expanded the format of her thangka paintings to quilt size. Her mother pieced and quilted the first of these new works, Echoes of Harlem (1980), before dying in 1981. It was in 1983 that Ringgold began to combine image and handwritten text in her painted “story quilts,” which convey imaginative, open-ended narratives; in the first one, Who’s Afraid of Aunt Jemima? (1983), the familiar advertising character is turned into a savvy businesswoman. Ringgold’s use of craft techniques ignored the traditional distinction between fine art and craft, while demonstrating the importance of family, roots, and artistic collaboration. 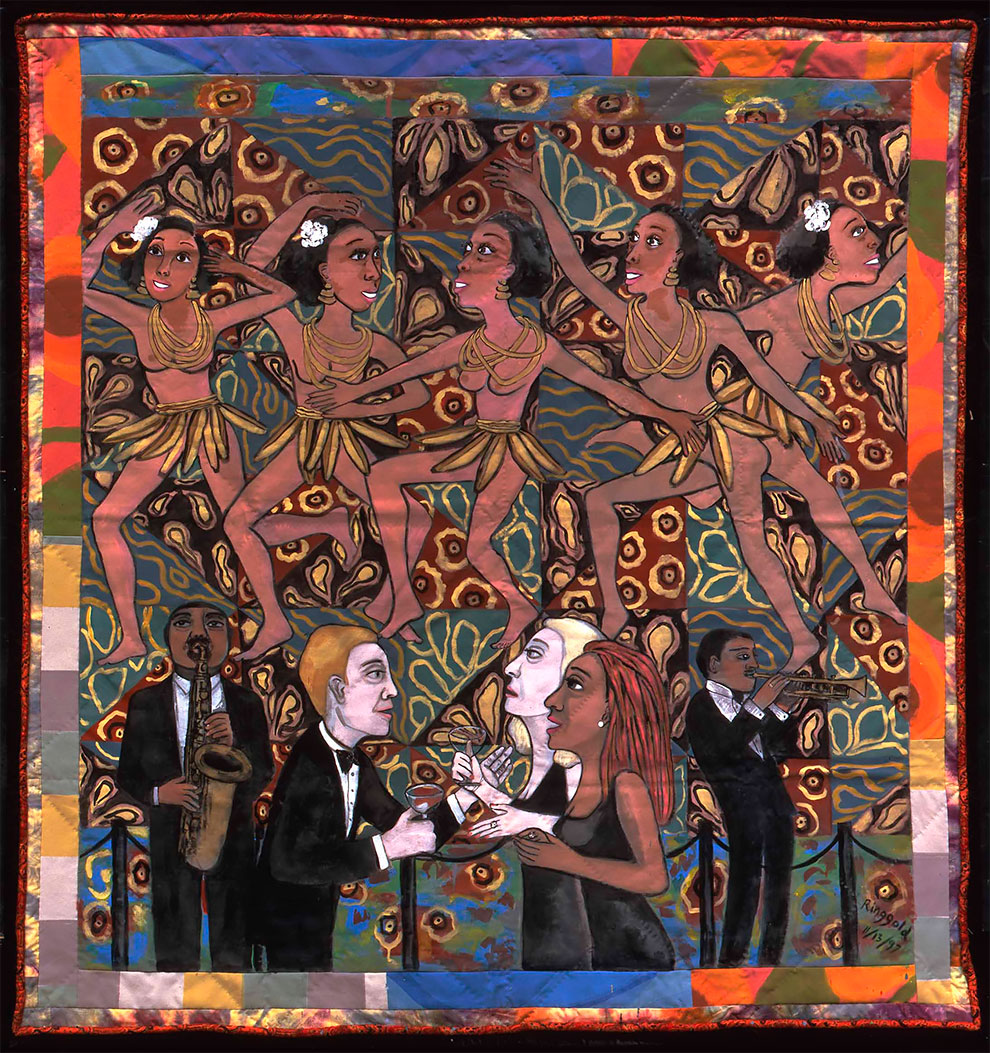 From 1984 to 2002, Ringgold was a professor at the University of California, San Diego. She adapted the story quilt Tar Beach (from the Woman on a Bridge series of 1988) for an eponymous children’s book published in 1991. Its critical and popular success led to her development of several other titles for children. For adults, she wrote her memoirs, published in 1995. 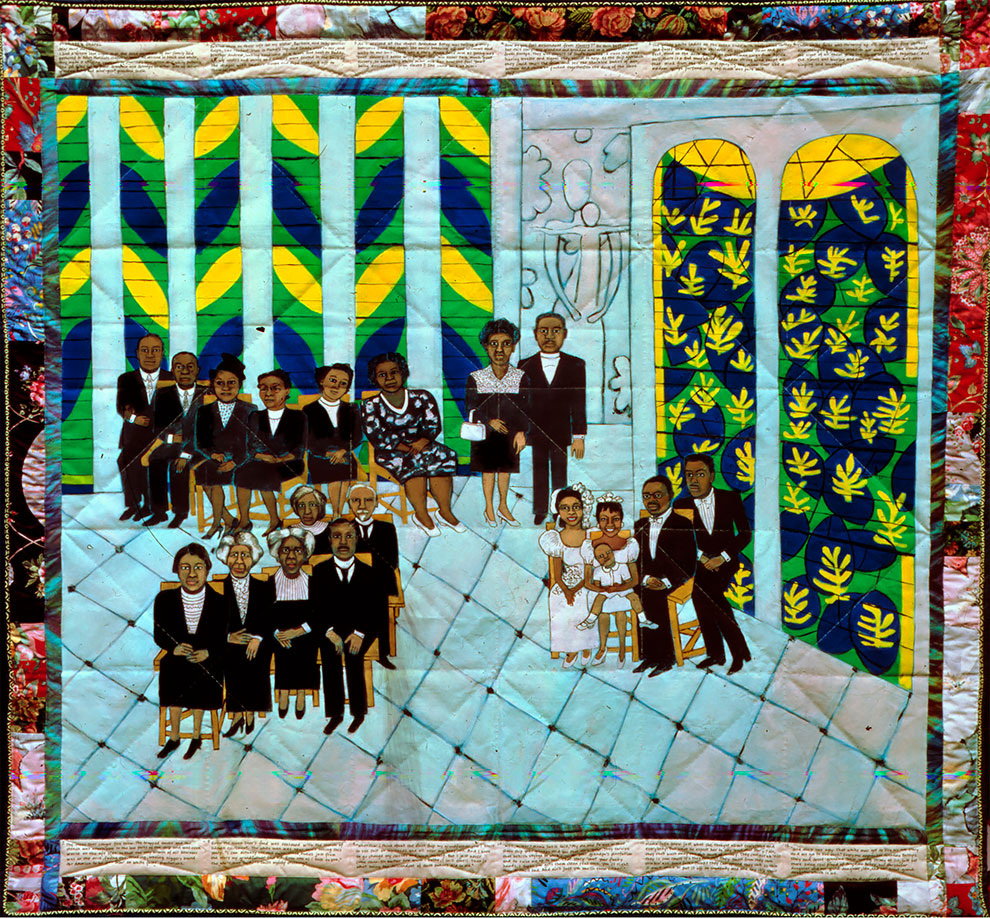 Ringgold’s first solo gallery shows were held in 1967 and 1970 at the cooperative Spectrum Gallery, New York. Retrospectives of her work have been organized by Rutgers University, New Brunswick (1973), the Studio Museum in Harlem, New York (1984), and the Fine Arts Museum of Long Island, Hempstead (1990). Ringgold’s work has been included in numerous exhibitions devoted to political art, women’s art, contemporary quilts, and African-American art, as well as in the Whitney Biennial (1985). Her achievements as an artist, teacher, and activist have been recognized with numerous honors, including National Endowment for the Arts awards in sculpture (1978) and painting (1989), a John Simon Guggenheim Memorial Foundation Fellowship (1987), and sixteen honorary doctorates. 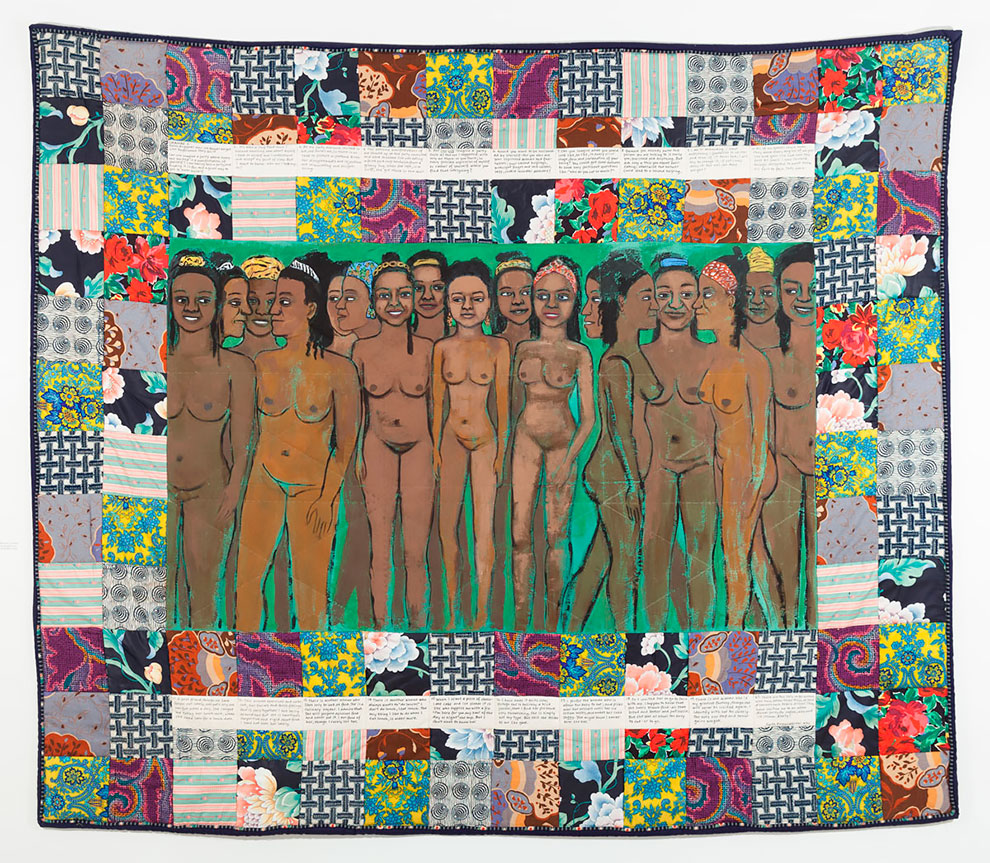 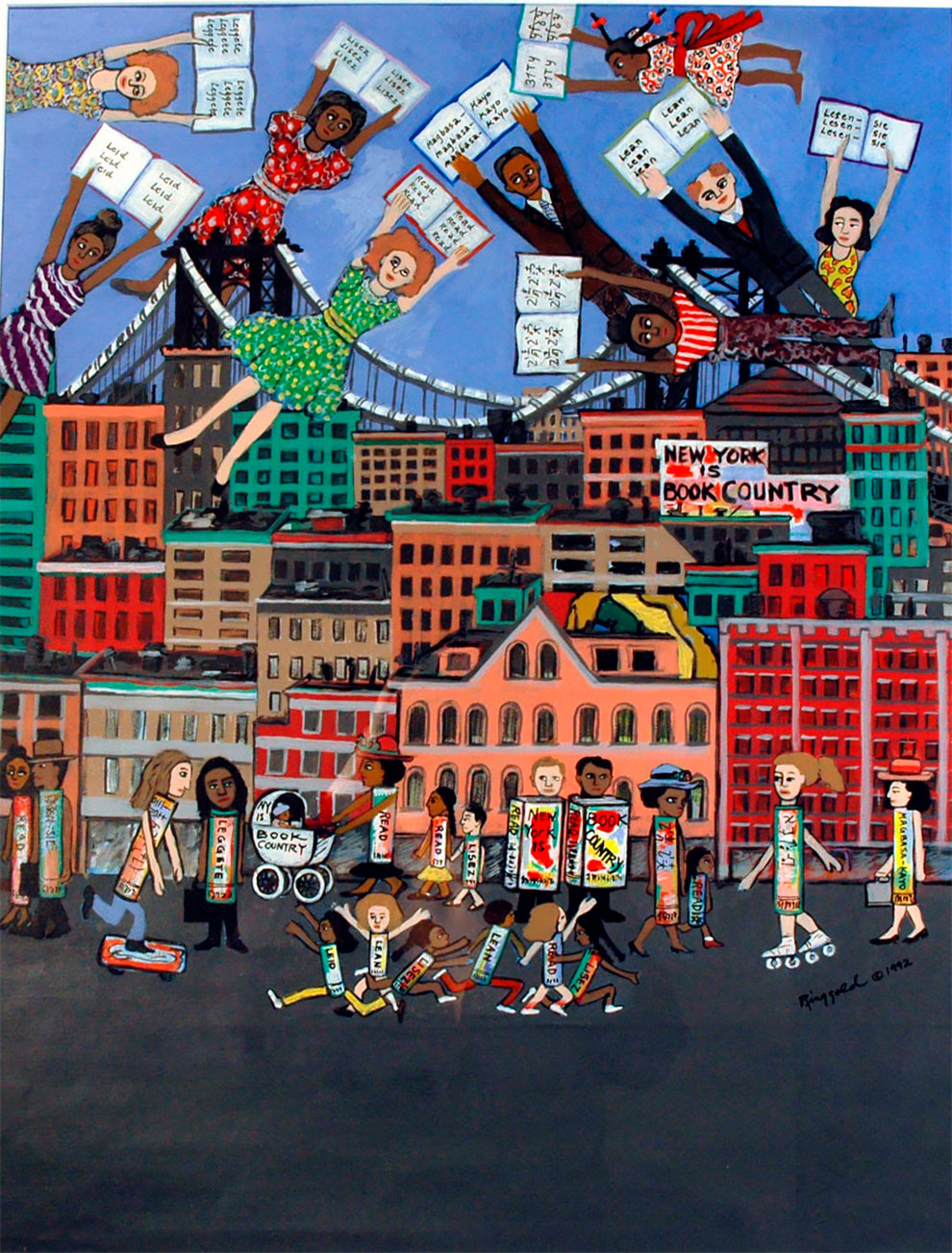 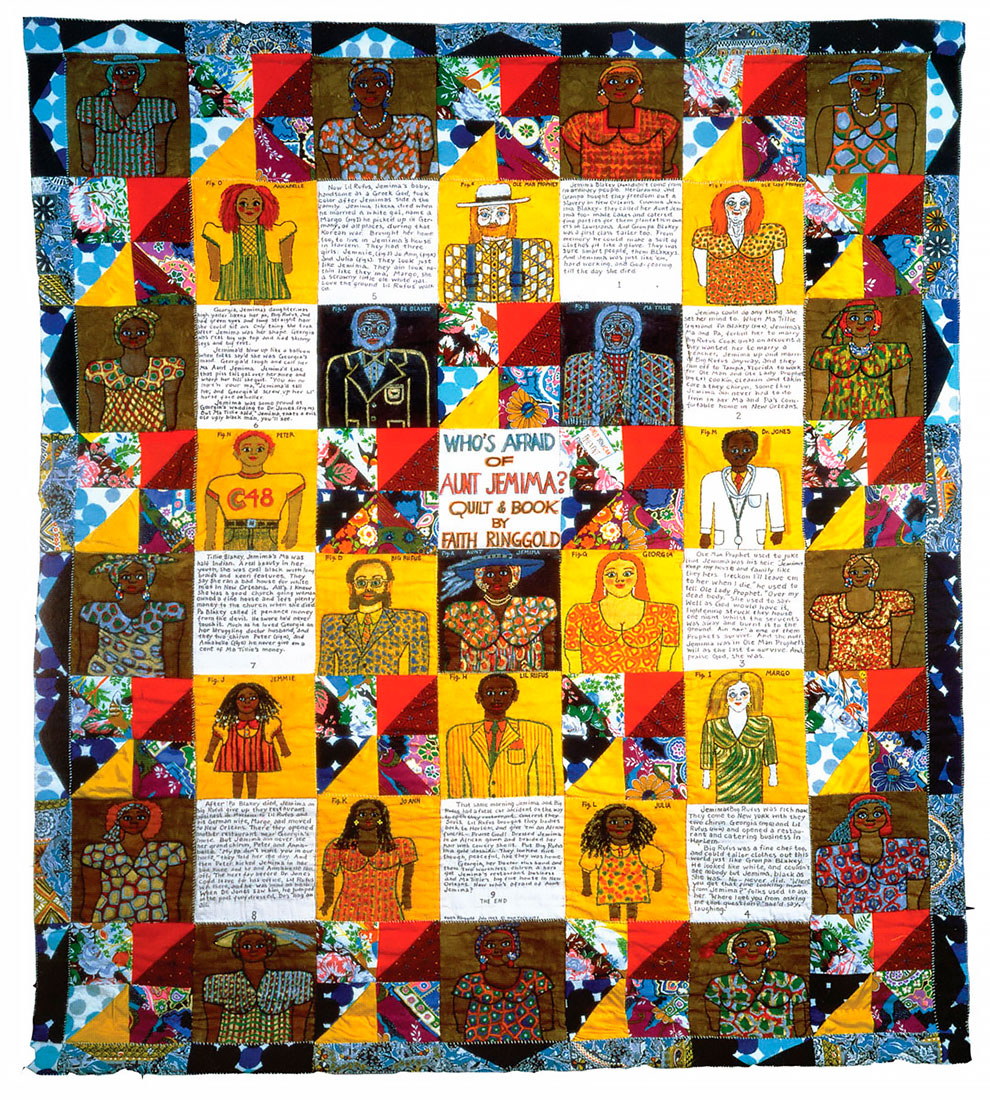 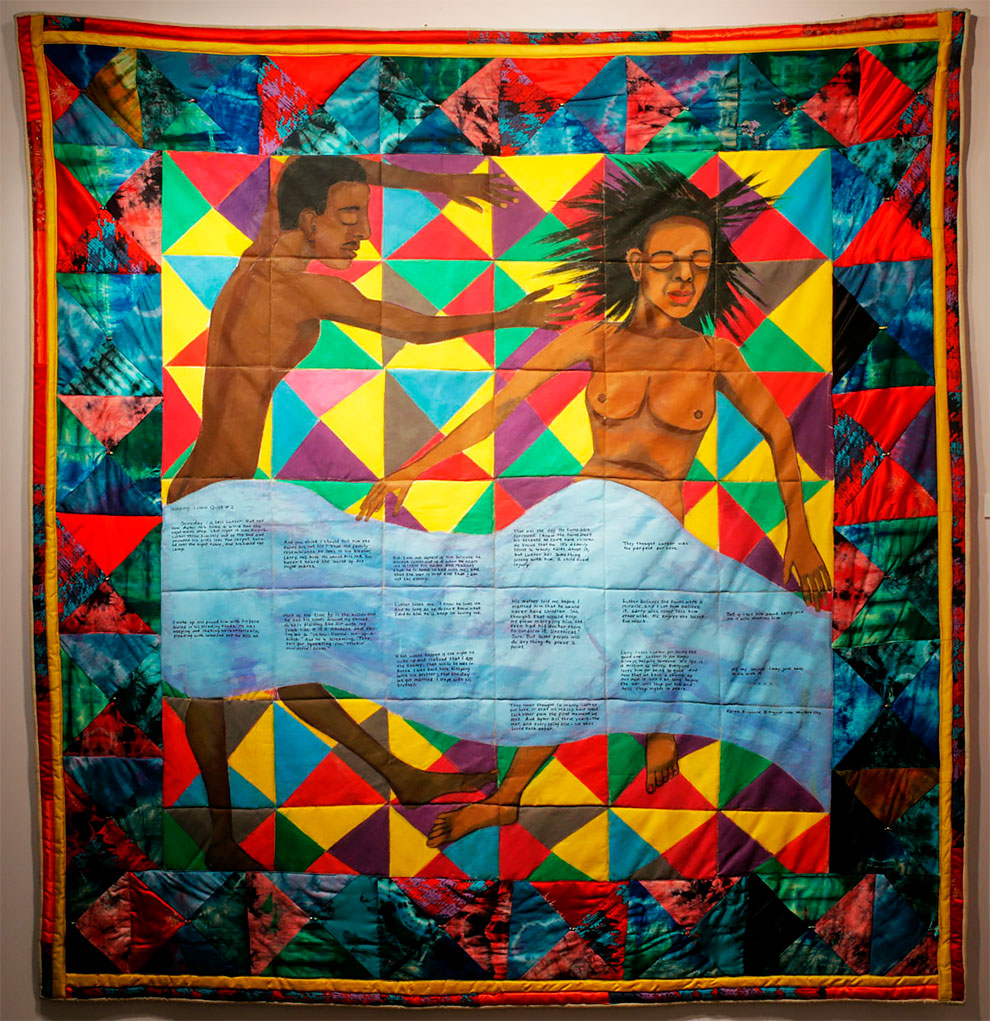 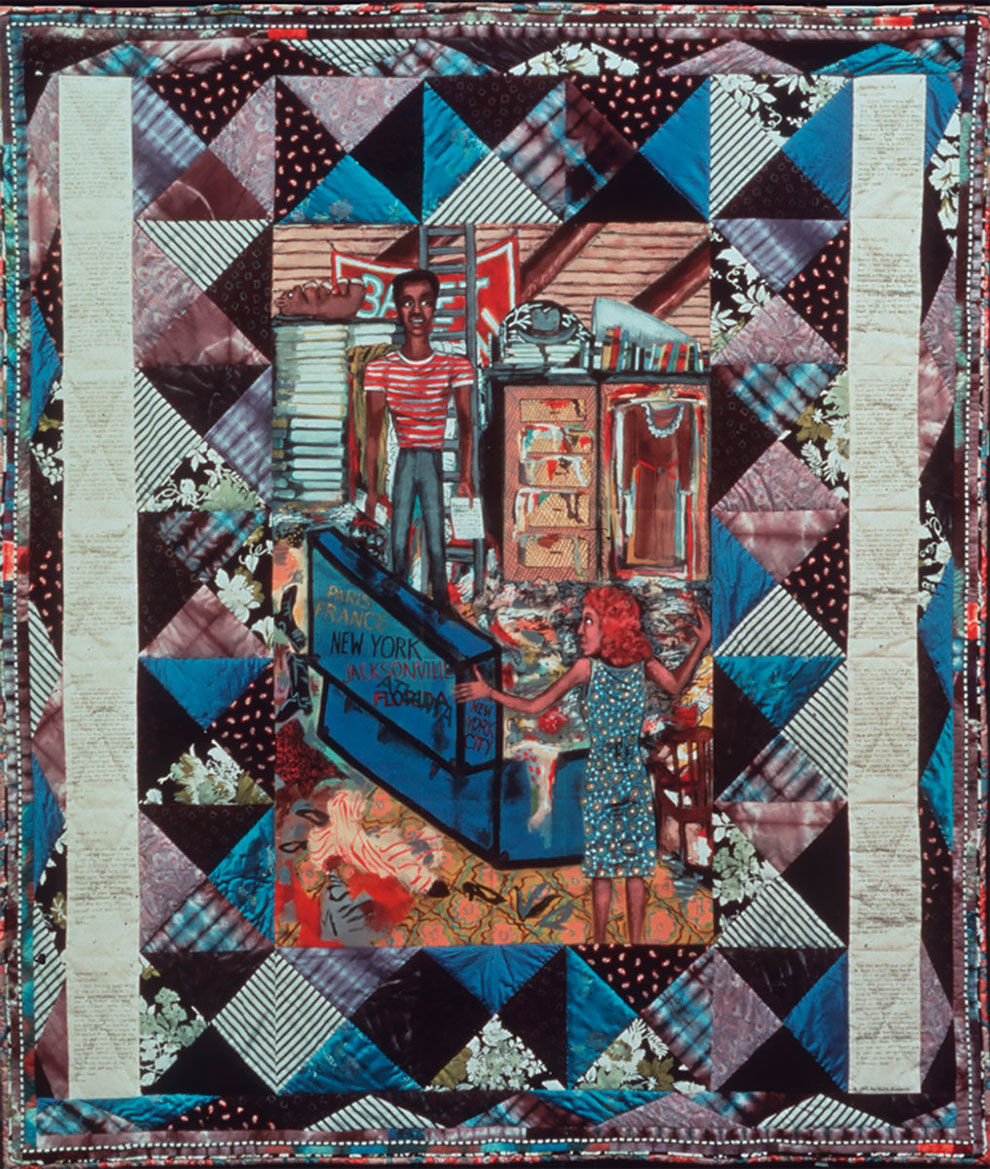 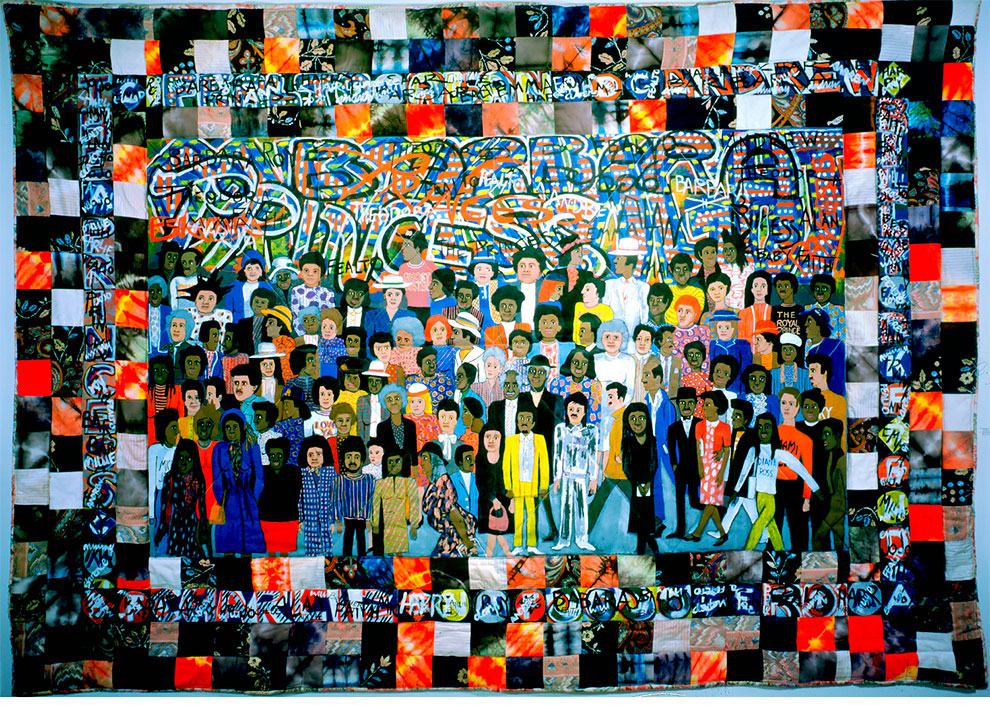 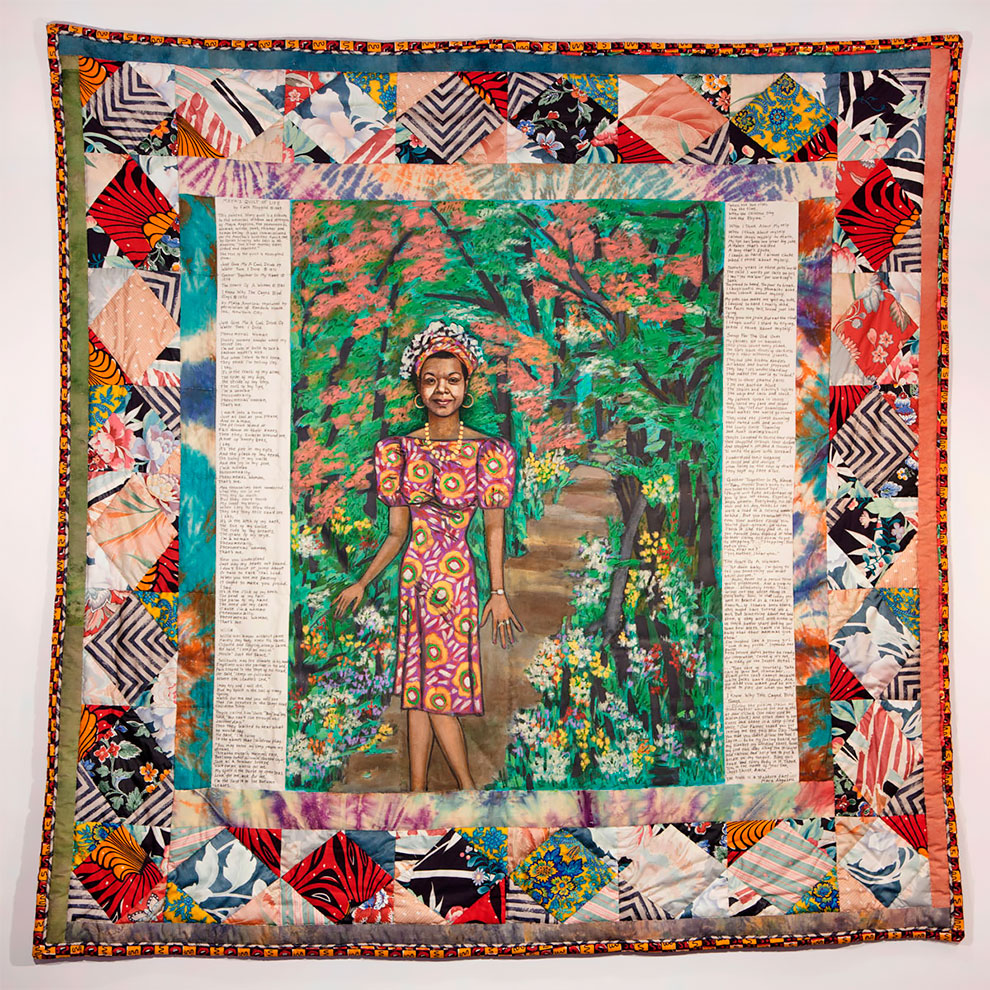 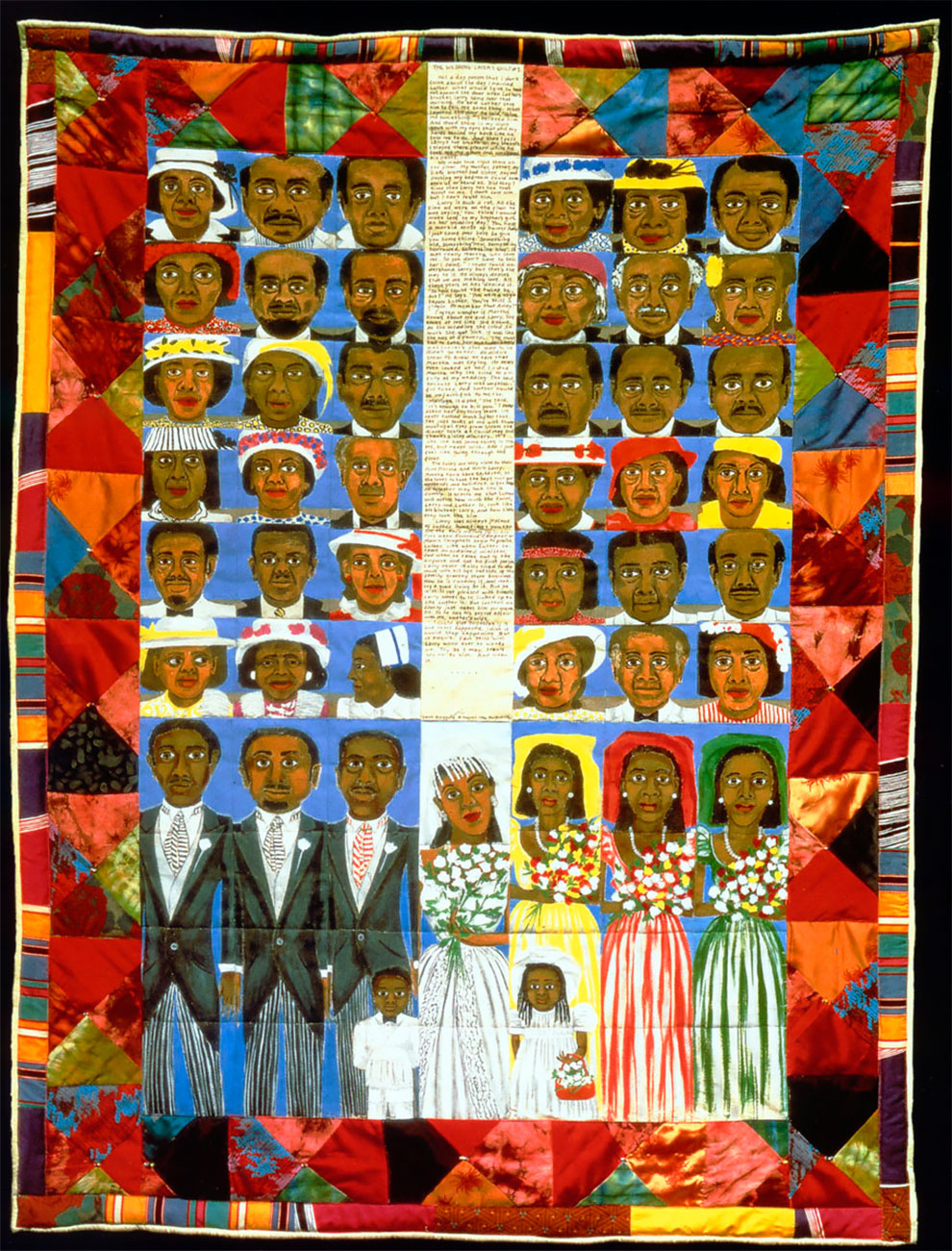 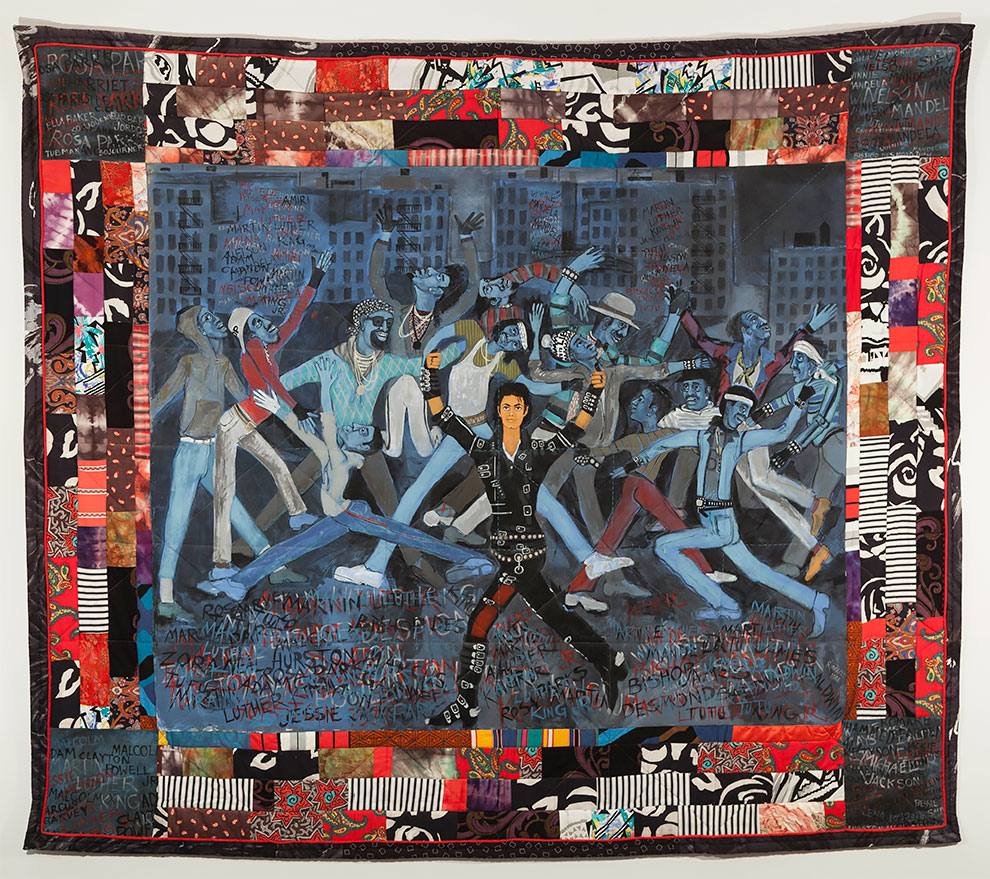 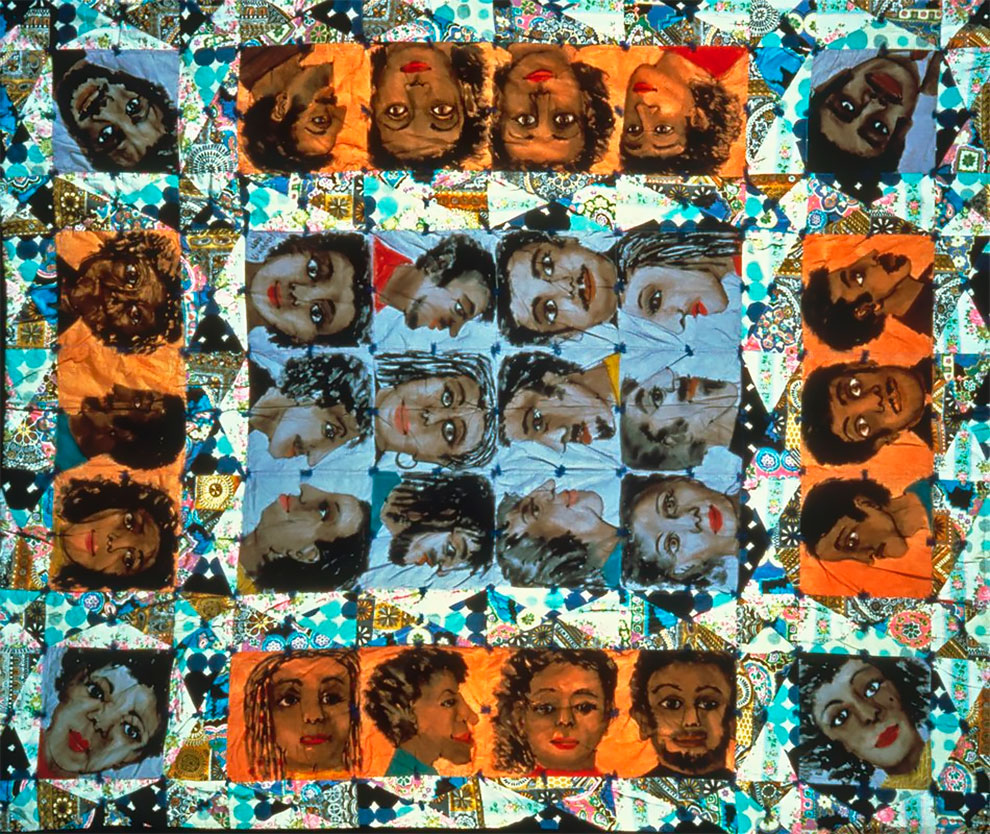 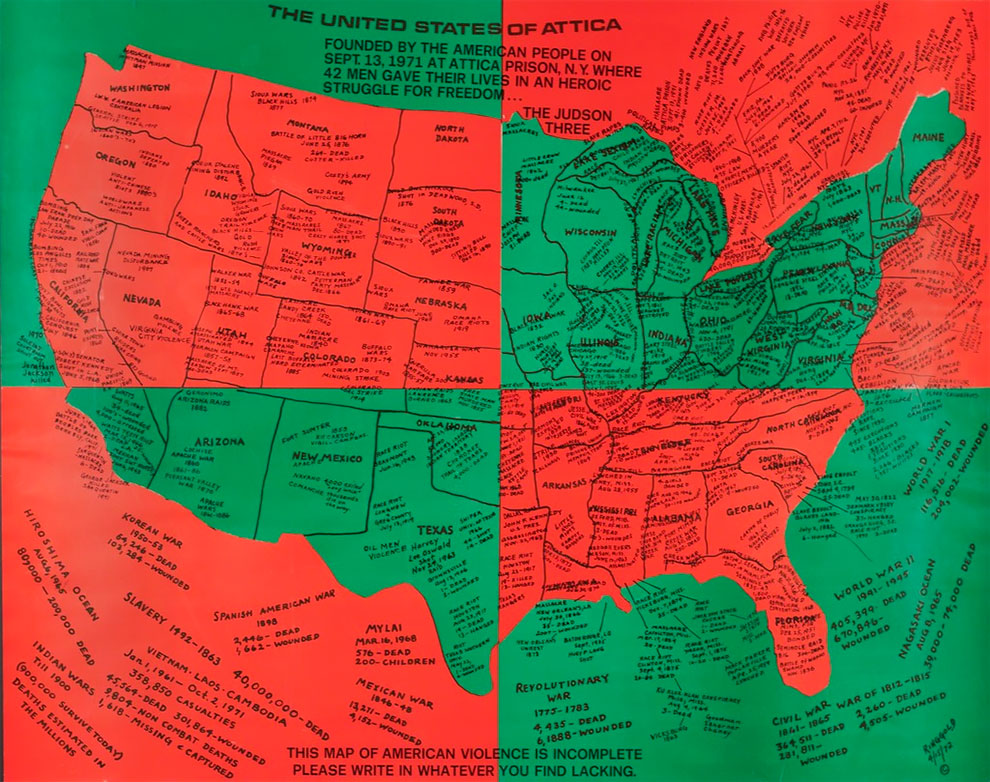 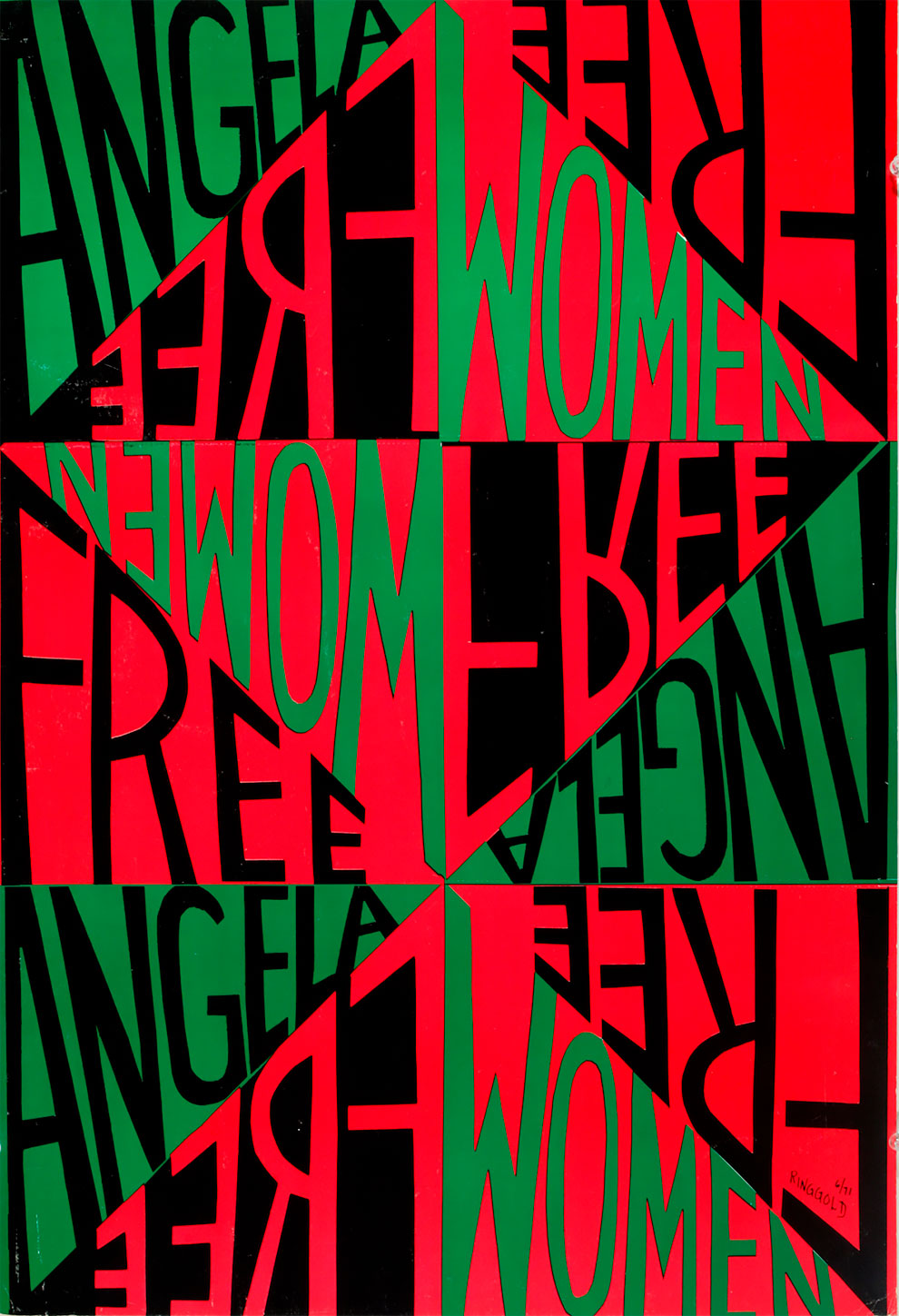 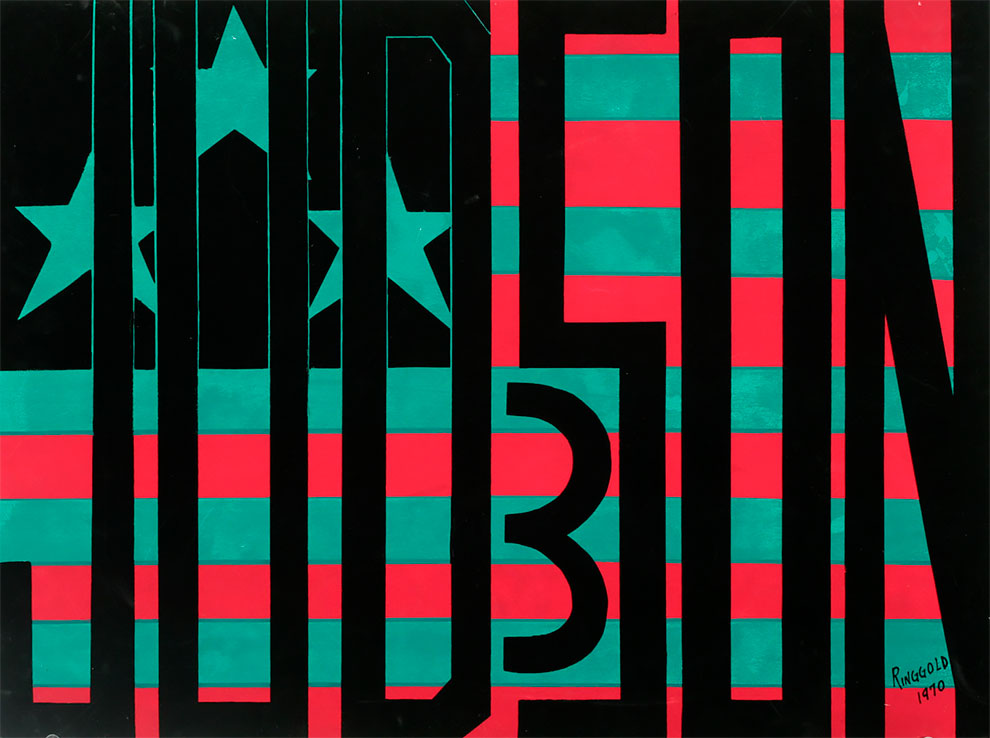 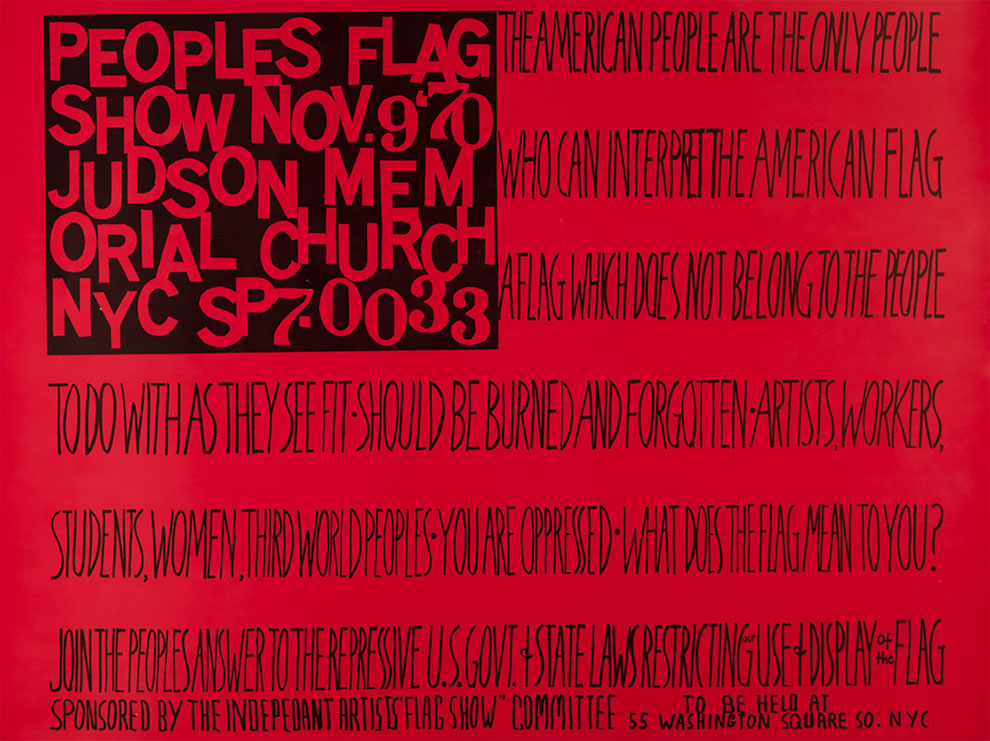 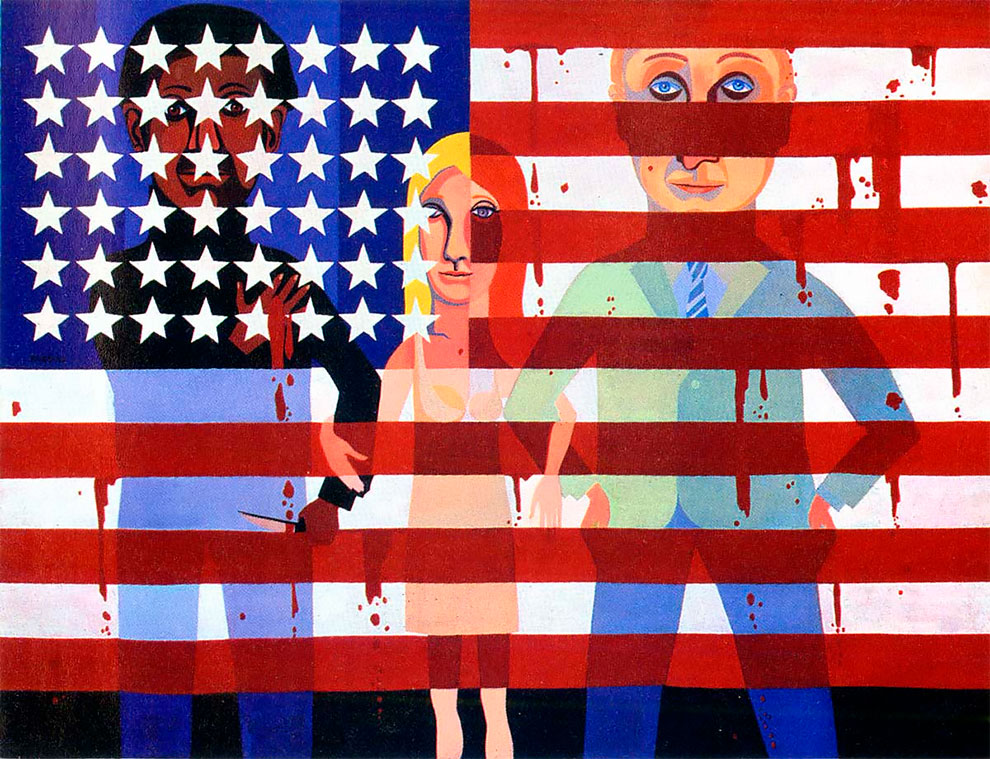 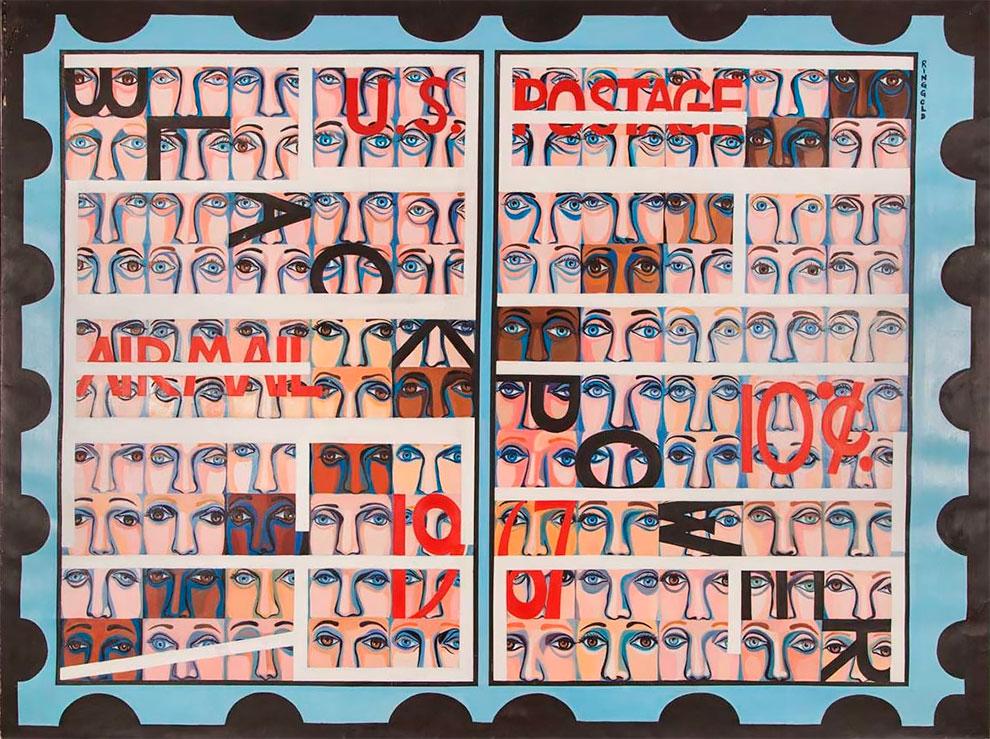 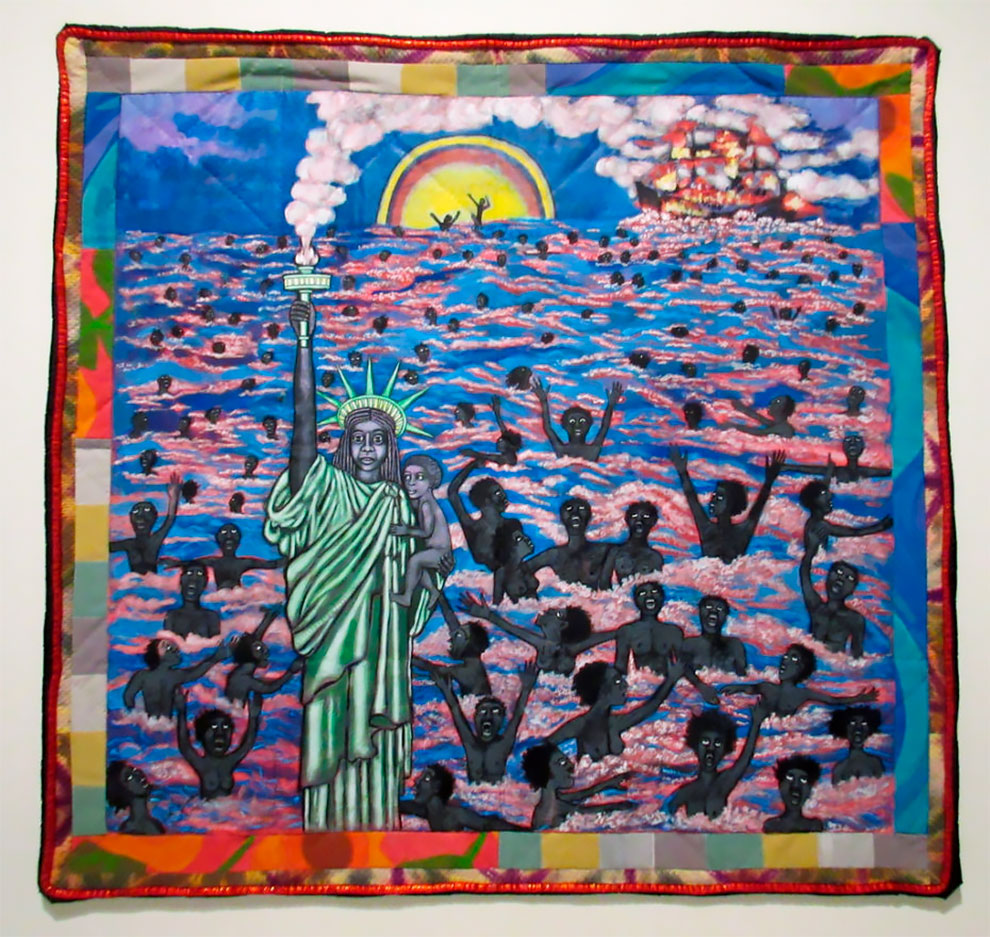 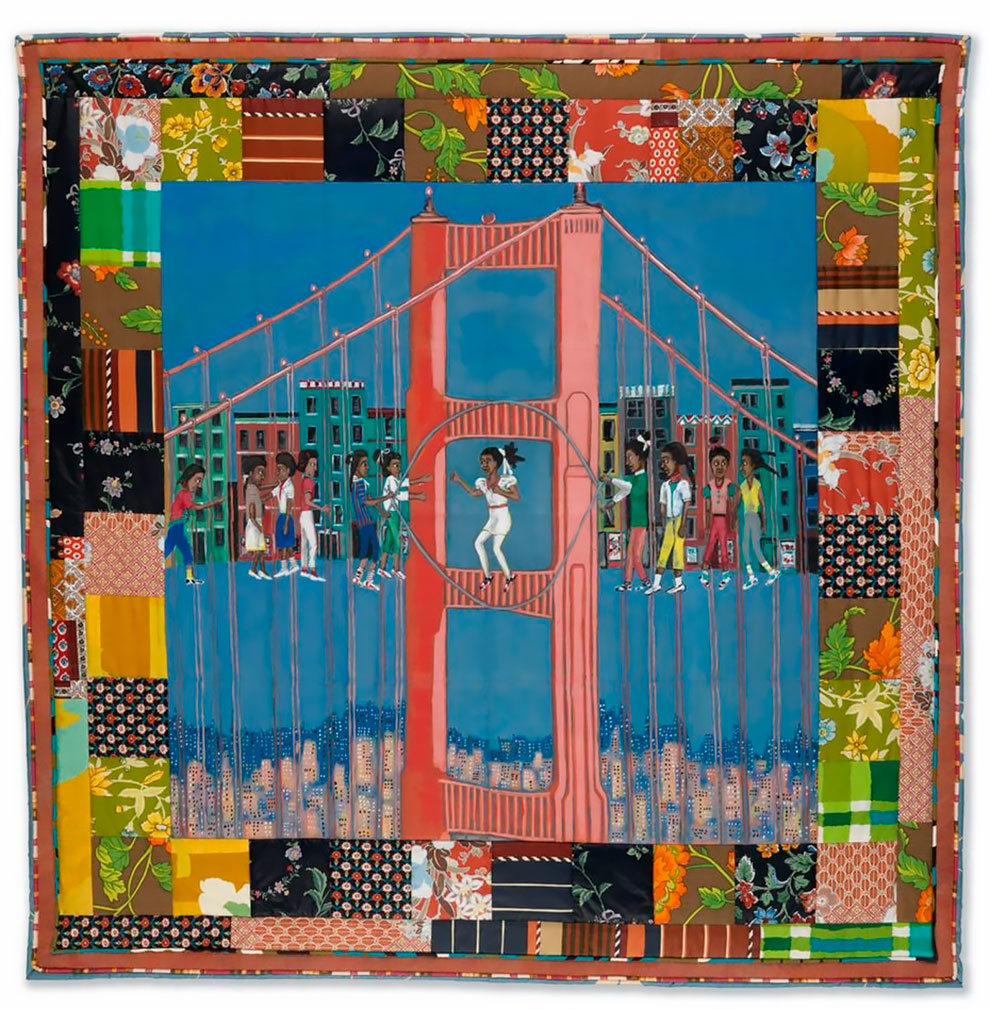 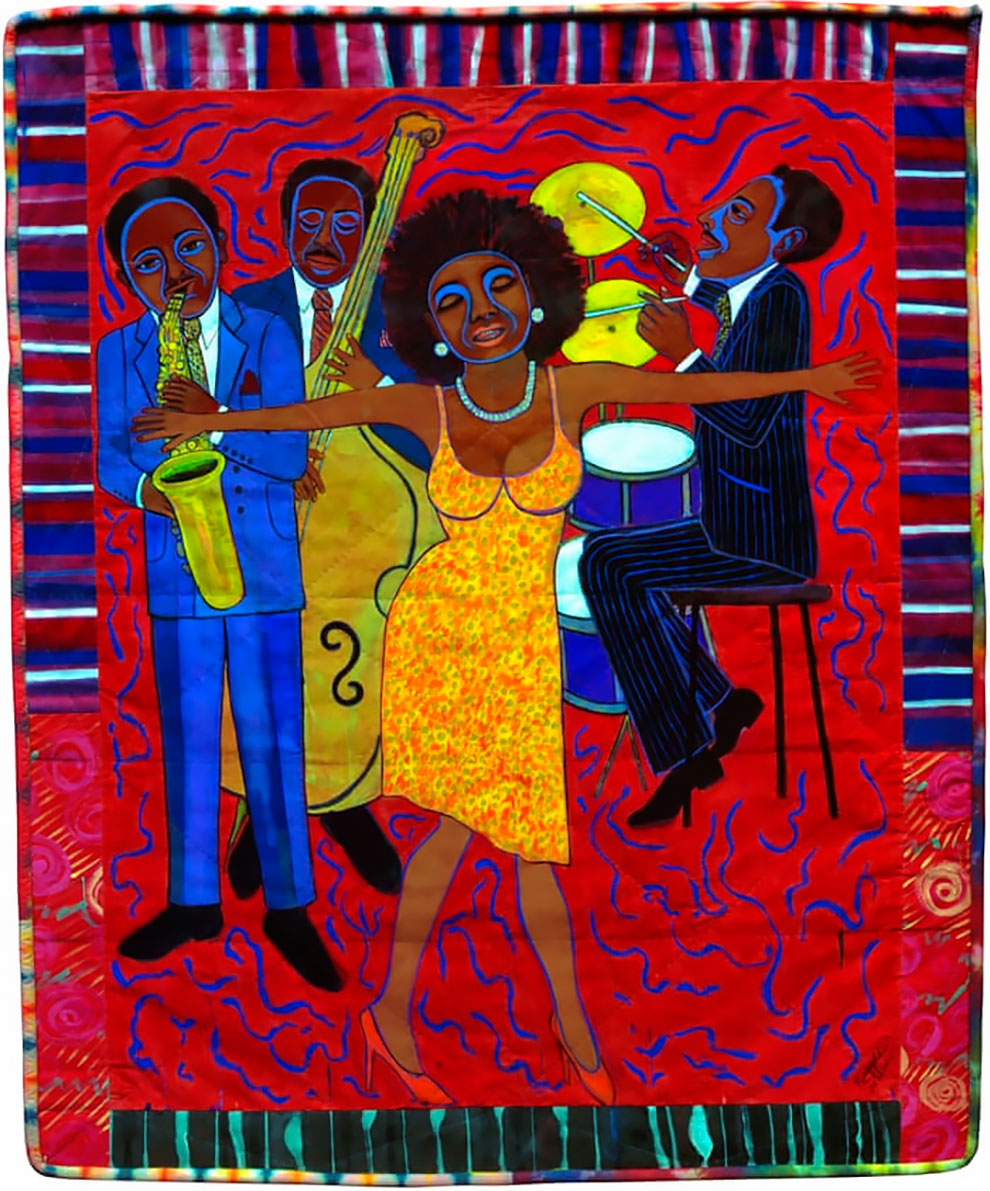 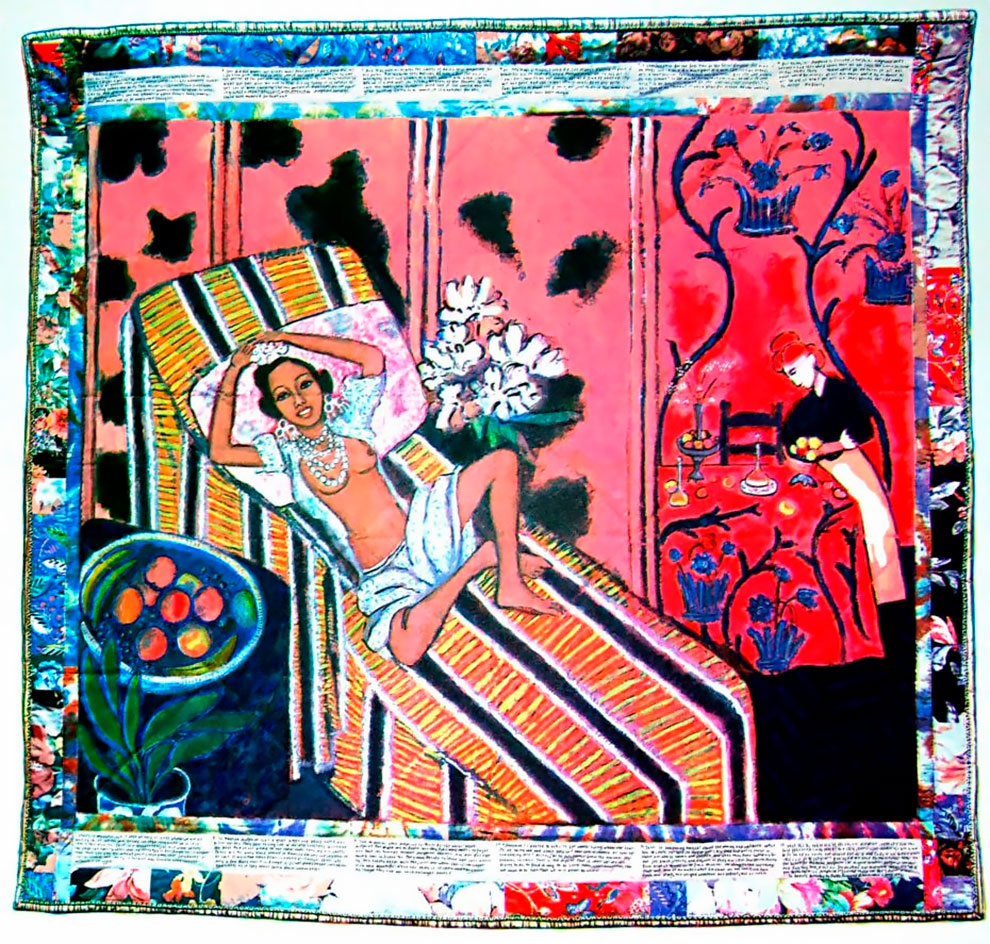 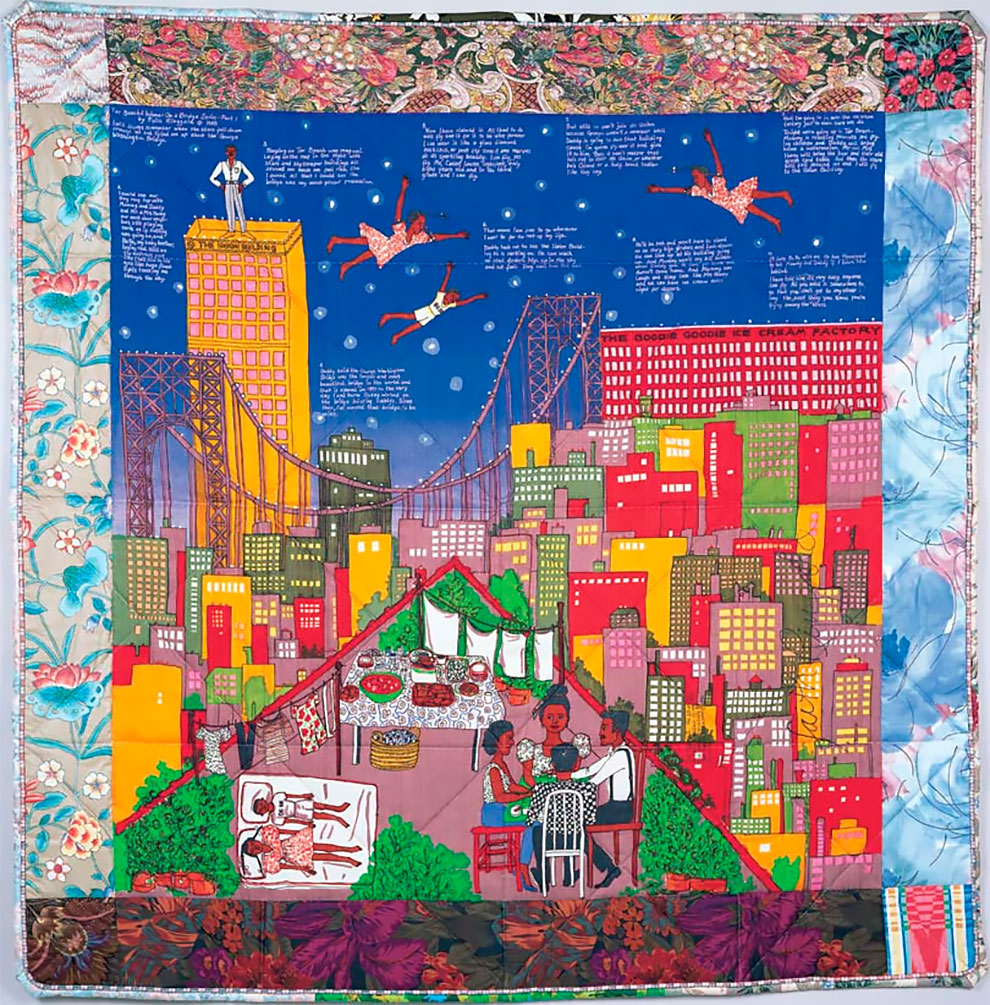 Everyone I Love Is Dead: The Superb Dark Fantasy And Horror Art Works Of Piotr Foksowicz
Sabeena Karnik Creates Beautiful Art From Colored Pieces of Paper
This Brilliant Dad Shoots Classic Pictures Of His Daughter Inspired From Old Oil-Paintings
Disney’s Bastards – The Provocative Paintings By Gilen Bousquet
"You Eat What They Eat": New Stunning Print Advertisement Created By Ogilvy
Outlandish Reality: Bizarre Digital Art By The Artist Nikita Veprikov
Intimate Pin-Up Beauties by Artist Sveta Shubina
This is What Politics Looks Like When You Delete Men from the Pictures
Young Artist Documents Her Daily Struggles Of Learning To Draw
Pechkeks Misfortune Cookies – The Dark Humored Biscuit That Bites Back
Metal Gear Rising: Reveangance Promo Murals
40 Newspaper Headlines That Push The Limits Of Human Stupidity
An Artist Portrays Everyday Life, And His Sense Of Humor Is Quite Unique
Superb Creative Photo Manipulations By Chunlong Sun
The Vivid Surrealism Of Quentin Deronzier
Cuong Nguyen Uses The Streets As A Canvas For His Incredibly Realistic Chalk Portraits
Women Selling Booze: The Ladies Of Vintage Alcohol Advertising
These Awkward Vintage Christmas Album Covers
This Girl Is Unbelievably Flexible
Positive Vandalism: The Artist Creates Street Art in The Most Unusual Places
I'm Not Expecting You To Fully Understand Me: The Intimate Artworks Of Tomona Matsukawa
The History of...
Book Covers Improved With Googly Eyes
The 20th Annual Lake Worth Street Painting Festival
black, civil, paintings, politics, powerful, rights