According to Aaron Shaw: “When I was a kid, all I wanted to do was live in the future. I just could not get enough of the future between the Jetsons, Epcot, and Back to the Future. I simply adored the inventions I imagined would one day fill our lives. But the future never came fast enough, so I began illustrating what I hoped our bright, silly future would bring. These illustrations are part of my collection of crazy goofy future invention illustrations I do to help kids imagine their own fun and wonderful future!” 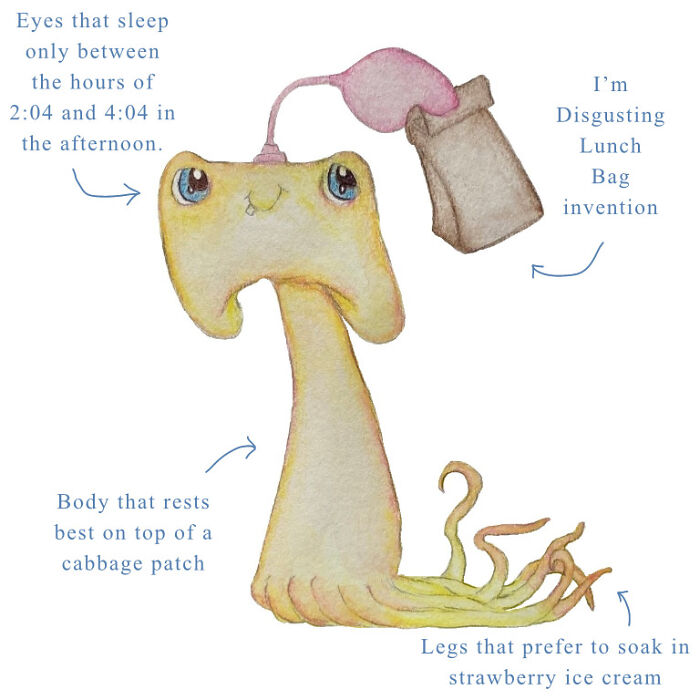 This Ekuuku is an introvert. The worst for him is lunchtime at his bounceable school. Because he is so yellow and has an extra arm, he is quite popular. But he hates it. So every day, he brings his “I’m Disgusting” Lunch Bag invention. This bag makes everyone around him think that they smell disgusting, and thus they scatter to avoid embarrassment. Hooray, isolation for everyone!

How Swimming Gets Better in 2064 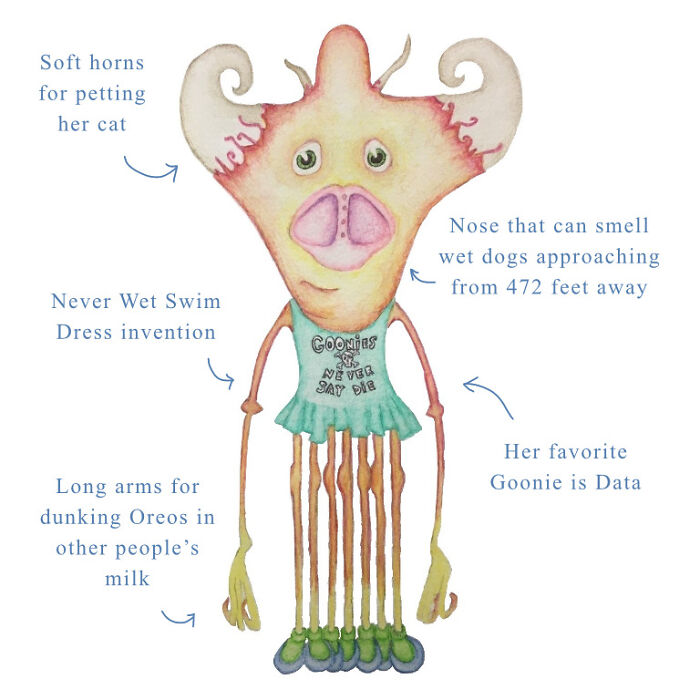 Sure, the Niog alien species were not the first to introduce the Never Wet Swim Dress technology, but they definitely brought style to it! This invention makes it so that the person wearing the swim dress never touches the water. In fact, if you jumped in a lake right now, the waters would part for you all the way to the bottom and you would walk out on the dry ground. (Also great for rainy days with no umbrella!)

How Snowballs Get Better in 2058 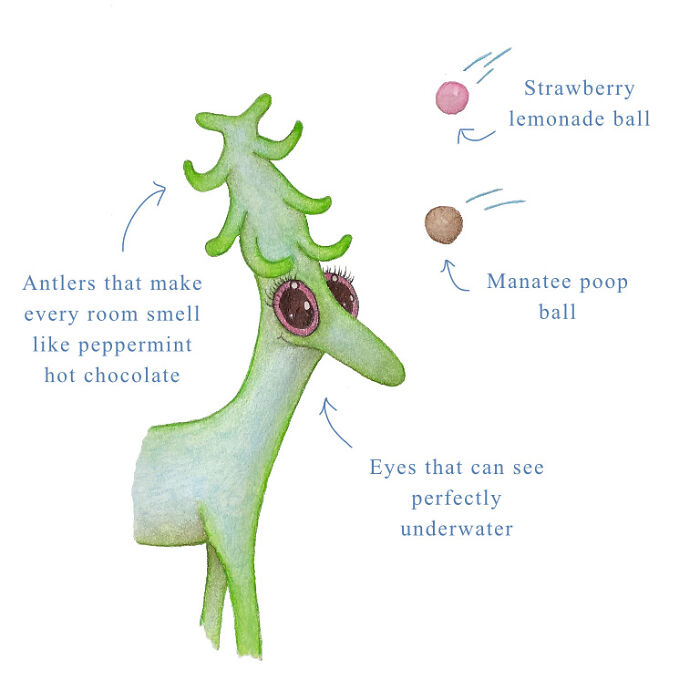 When a Qweply enters a room, everyone knows it. It is precisely because of this aroma that they receive many Guided Flavor Ball inventions their way. Whisper the flavor you want into the ball and the name of the person you want to hit in the face with it, and within 37 seconds, they will receive a vigorous blow to the noggin. Works anywhere in the galaxy! 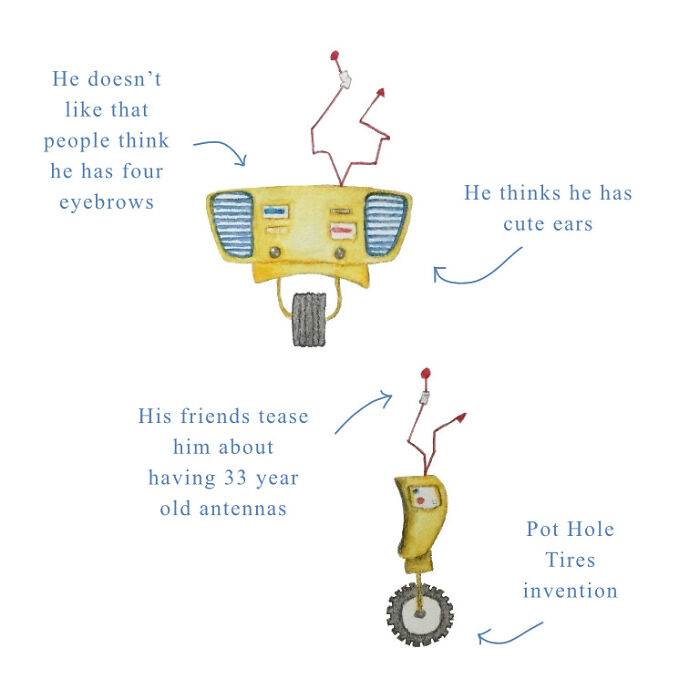 This little guy is what most people call a “pot bot,” but I am sure you can guess why he does not love that nickname :) He and 52,000 of his identical siblings were released onto the road system 37 years ago to fill the potholes. They spend their days dreaming about oil baths while they zip in and out of traffic at 151 miles per hour. They are equipped with special wheels that drop asphalt to fill the gaps within seconds of landing in one. In general, they are a happy bunch and love to be working. Their motto is “potholes are not as good as dinner rolls.” (They were not created with the ability to come up with a good motto.) 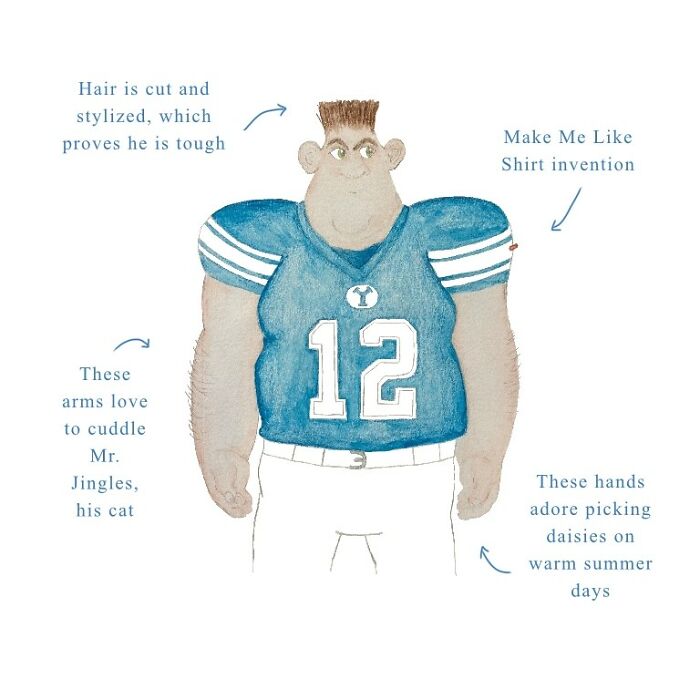 Frodo here weighs 117 lbs. He and his family bond by watching Lord Of The Rings movie marathons 6 times a year. But Frodo has a dream to be a linebacker. So, in 2079, he invented the Make Me Like Shirt. Put it on and press the button. Your body turns into the same size and shape as the athlete whose Jersey you are wearing. No more hard work to be a big huge muscle head athlete!

How Wrinkles Get Better in 2094 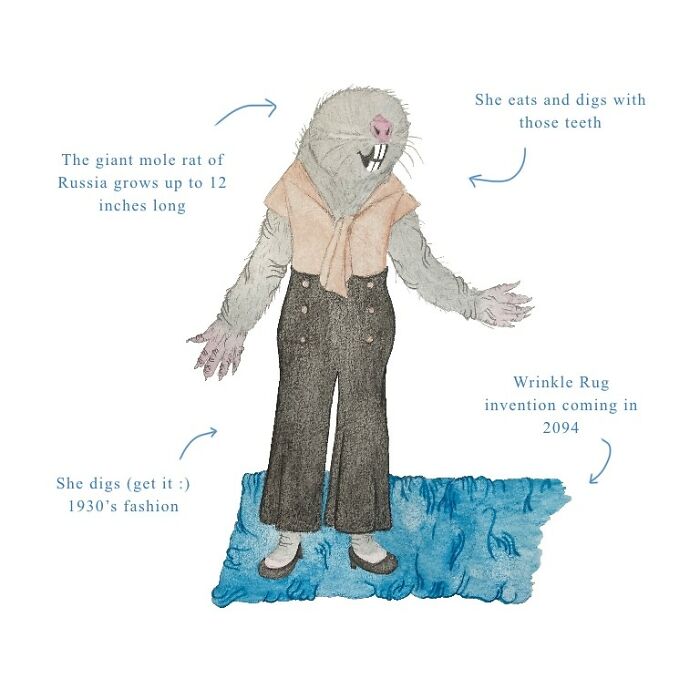 Anna spends most of her time under the ground. As with most giant mole rats of Russia, she has only ever had one man in her life. It is a good less-than-glamorous life, which is why it is a bit surprising that she decided to invent the wrinkle rug. One step on this wrinkle rug and all of your wrinkles begin to transfer the right to the rug! It takes about 3 minutes to remove every wrinkle you have. Works on clothes too!

How Meetings Get Better in 2085 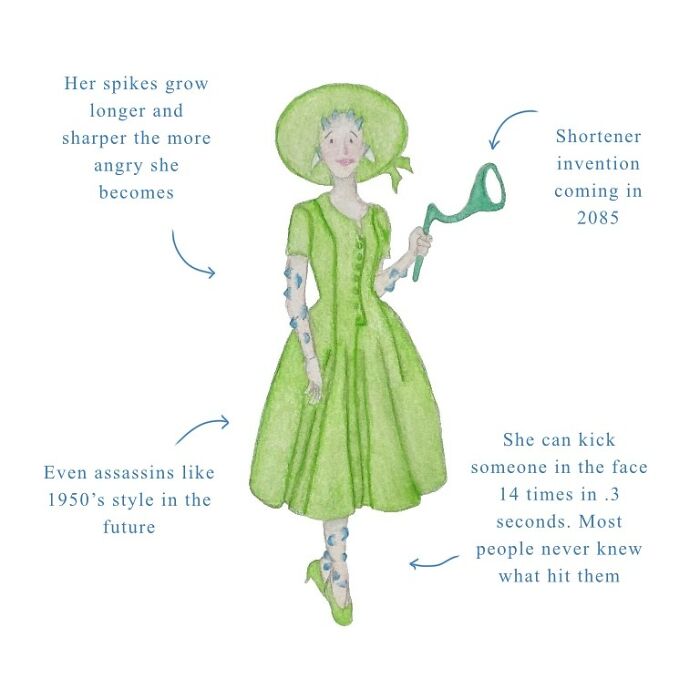 You would think that the lovely ladies of planet Forton just loved meetings how they attend them with such glee. But they don’t. Like humans, they find meetings exhausting and long-winded. So, they invented the shortener. This handy little device shortens every event down to its essentials. Turn a math class into a 15-minute crash course, turn a football game into 14 minutes of actual gameplay, turn those “necessary” meetings into 10 seconds of information that actually pertains to you! 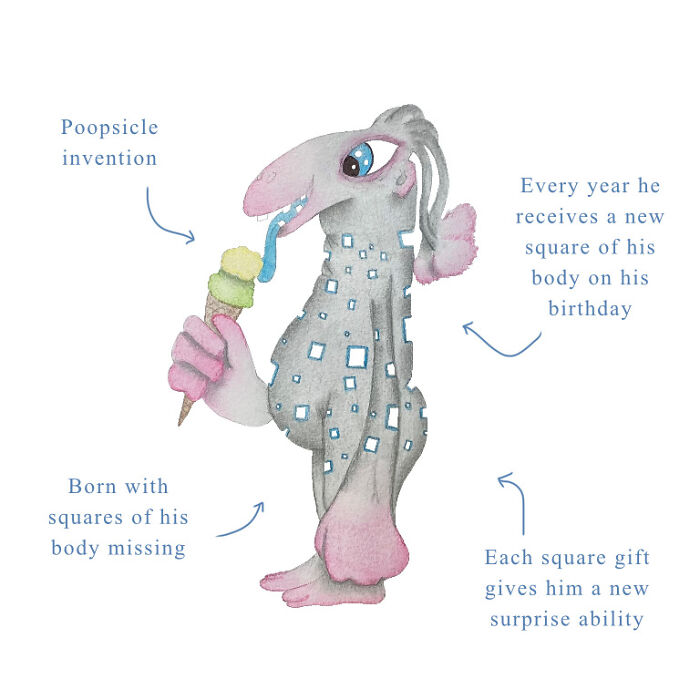 Aplidons love birthdays even more than humans. This is for two reasons: 1) They get a new square that fills in another gap in their body. This square then gives them a new ability like playing the clarinet, hitting a double, or holding scorpions without being stung. 2) They get their new poopsicle. These poopsicles, when eaten, change your poop to the same smell like the flavor of poopsicle! Last year as a joke, everyone got vomit-flavored poopsicles at Frankie’s party. For the next year, bathroom breaks were not so pleasant.

How Hand Washing Gets Better in 2066 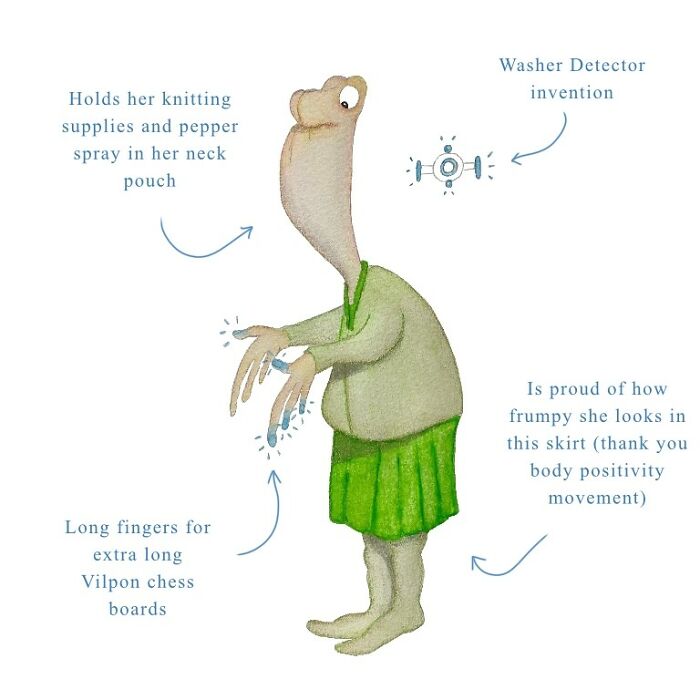 The Vilpon race is kind of crazy about germs. It turns out that global pandemics really freak them out. They stop licking toilet seats as soon as they hear about the latest outbreak. Well, because of their need for cleanliness, they also invented the washer detector. Just hang it on the wall by the restroom. Now, whoever comes out of the bathroom without washing their hands will have neon blue glowing fingernails for the next 7 hours. Let the public shaming begin! 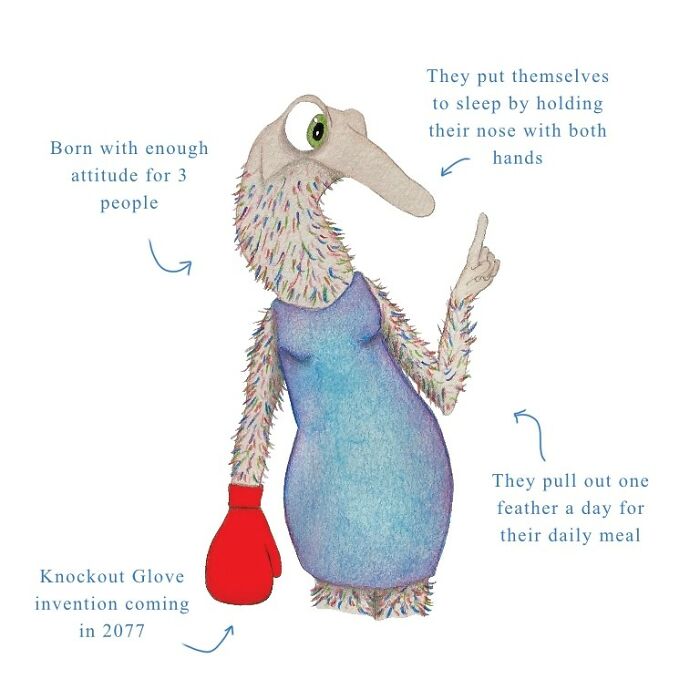 Highly considered one of the ugliest species to visit the Earth, the Slurtgoes quickly had to invent something to keep the haters at bay. So they came up with the knockout glove. Walk up to someone making fun of your ugly baby, and pop them on the nose. Down they go, knocked out. The glove leads your hand to the perfect knockout blow every time!

Unicorn Being A Jerk
"The Florist & Garden Miscellany": Unique Collage Works That Include Botanics And Themes Of Mortality
Self-Taught Artist Draws the Most Amazing Optical Illusions
Futuristic Cartoons That Will Make You Laugh, Then Cry
Modern Logos in Chromatic Style by Martin Naumann
1938 Phantom Corsair: The Regret Of A Car Ahead Of Its Time
Beautiful Watercolor Animal Illustrations By Luqman Reza Mulyono
Beyond: Artist Imagines Of What The World Will Look Like If Quarantine Doesn’t End
Meet Miisa, A Kawaii Hijab Cosplayer From Malaysia
12 Reasons Why I Love Her
An Illustrator Imagines What Disney Princesses Would Look Like If They Were Modern Teenagers
Superheroes, Demons, and Fierce Berserkers: Powerful Illustrations by Luciano Fleitas
Hot Legal Work
Scary Potter – Terrifying Alternative Posters For The Harry Potter Movies
Cute and Warm Sketches of Japanese Life by Naoyuki Hayashi
Griffin Microsheen Used To Have Some Interesting Shoe Polish Ads In The 1950s
Artist Reimagines Disney Characters As Famous Classical Paintings And Pop Culture References
Artist Places People From Classical Paintings Into Modern Reality And They Fit Just Right
Sensitive Figurative Paintings by Egyptian Artist Walid Ebeid
Hilarious “Work Safety” Posters From The Soviet Union Era
'Game Of Thrones' Characters From The 80s And 90s
"False Gods": The Stunning 3D Dreamscape Artworks of Jonathan Puc
Trees Grow From Bricks And A Storefront On The Streets Of New York
Incredibly Strange Collages That Will Make You Very Uncomfortable
Aaron Shaw, future, humor, inventions