According to Mario Yaír T.S.: “After being locked up for several months, I decided to decorate my door with miniature monsters from medieval times. Somehow, along the way, it became a medieval map full of symbolism, some carefully planted Easter eggs, and overall a filled canvas with various references that can leave one more than just curious.

The monsters that filled this door canvas are not only from Europe, but also from other continents too. Therefore, that’s why it took me a while to fill in the map as I took a lot of references from various cultures from around the world.” 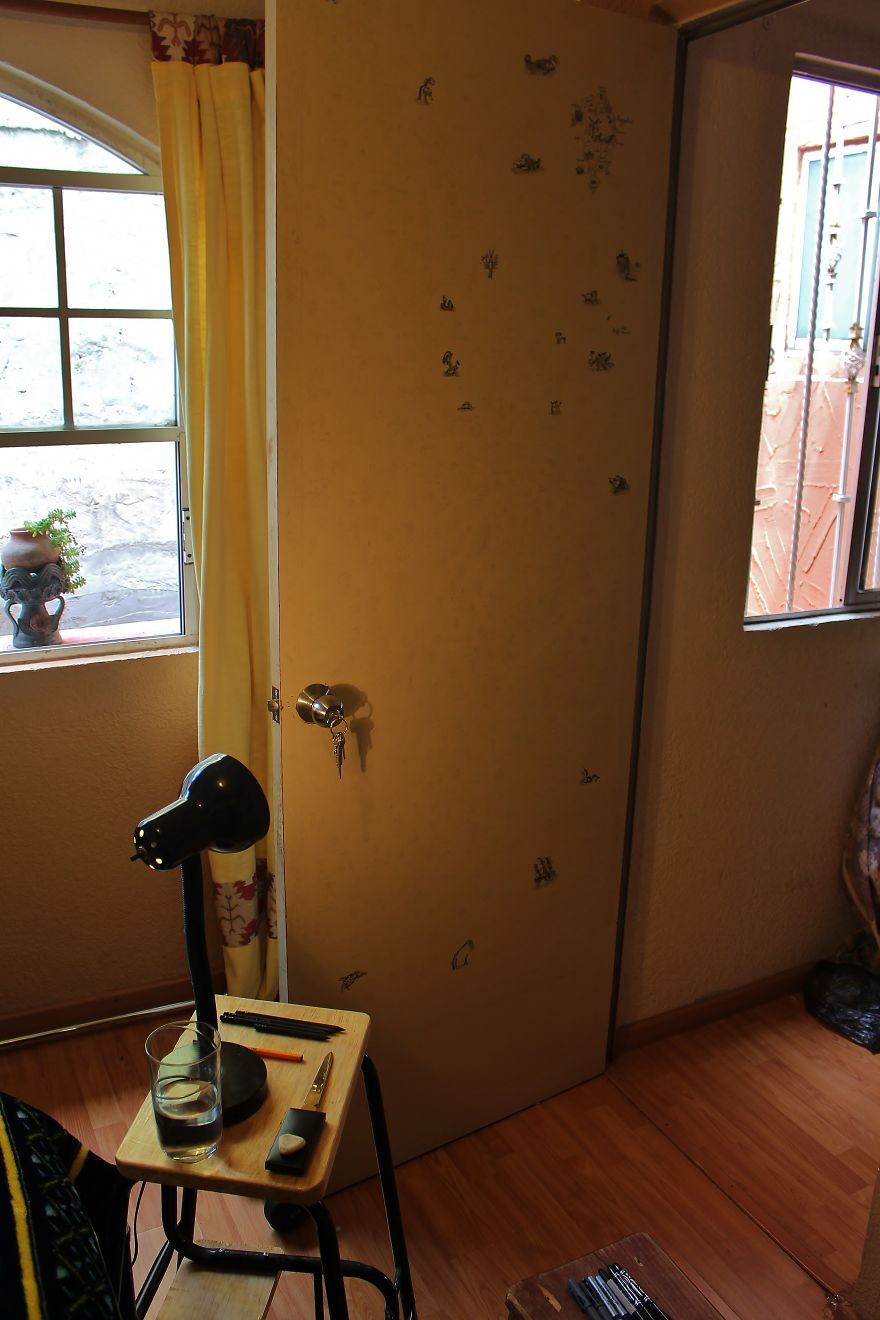 “It all started on an ordinary day of the quarantine, and like most of the days, this one too was filled with a lot of boredom and a still clean door. So I looked up some sea monsters and drew them. When I realized they looked lonely, I sketched a complete map.” 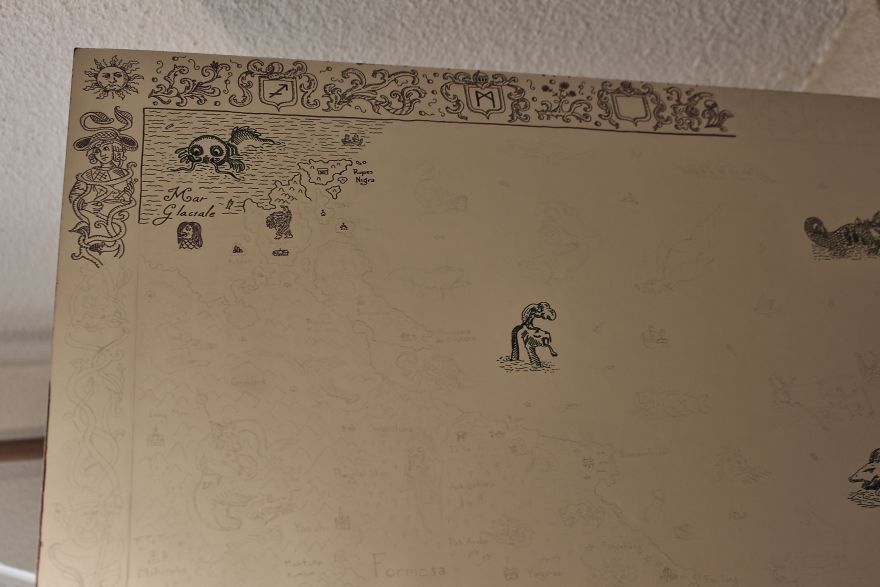 “To give it an antique map style, I decided to frame it. The empty spaces were filled with my ideas.” 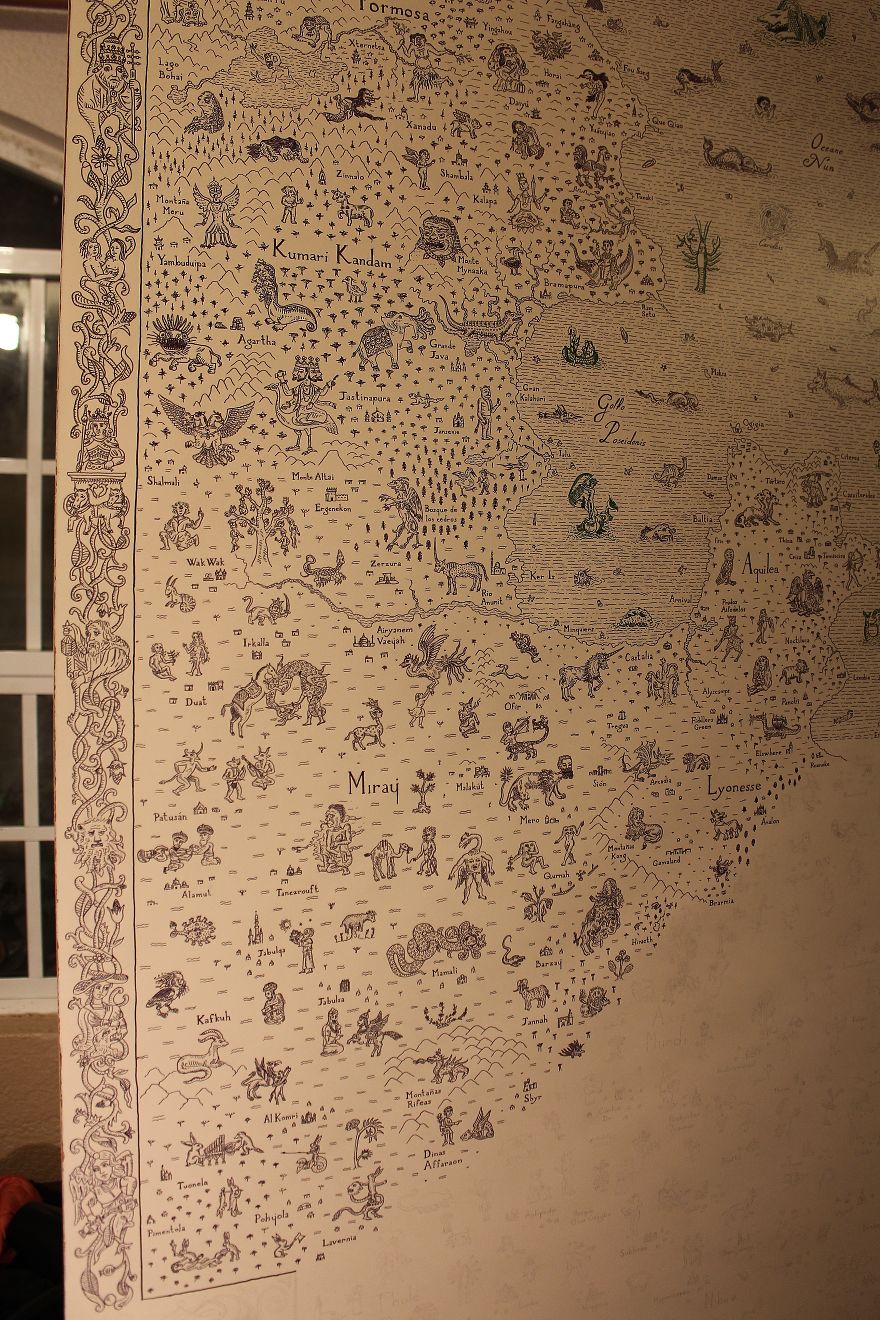 “The point was to illustrate as many medieval monsters and supernatural characters as possible, not only from Europe, but also from all over the world.” 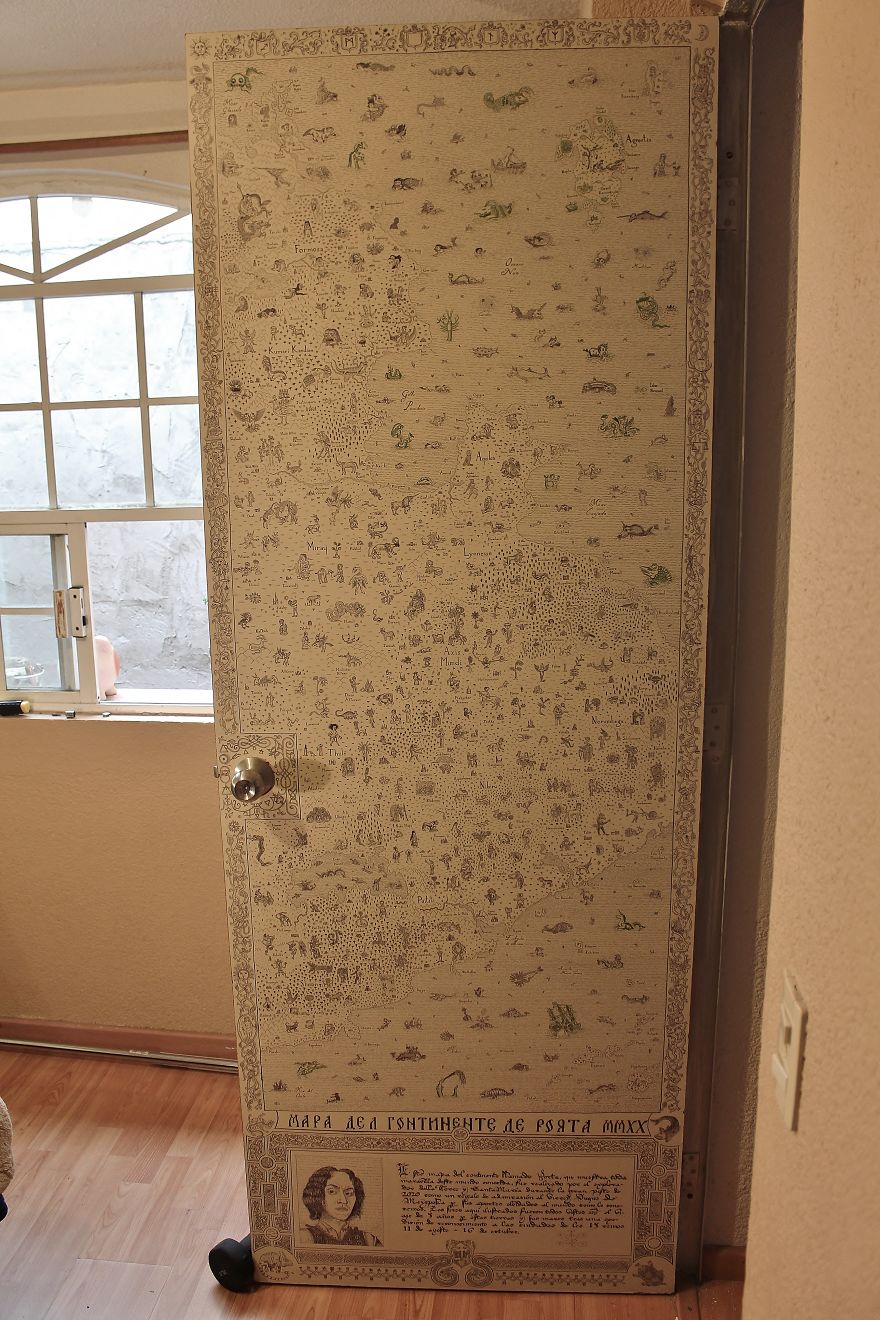 “The result was a map full of symbols, hidden things, and other additional details.” 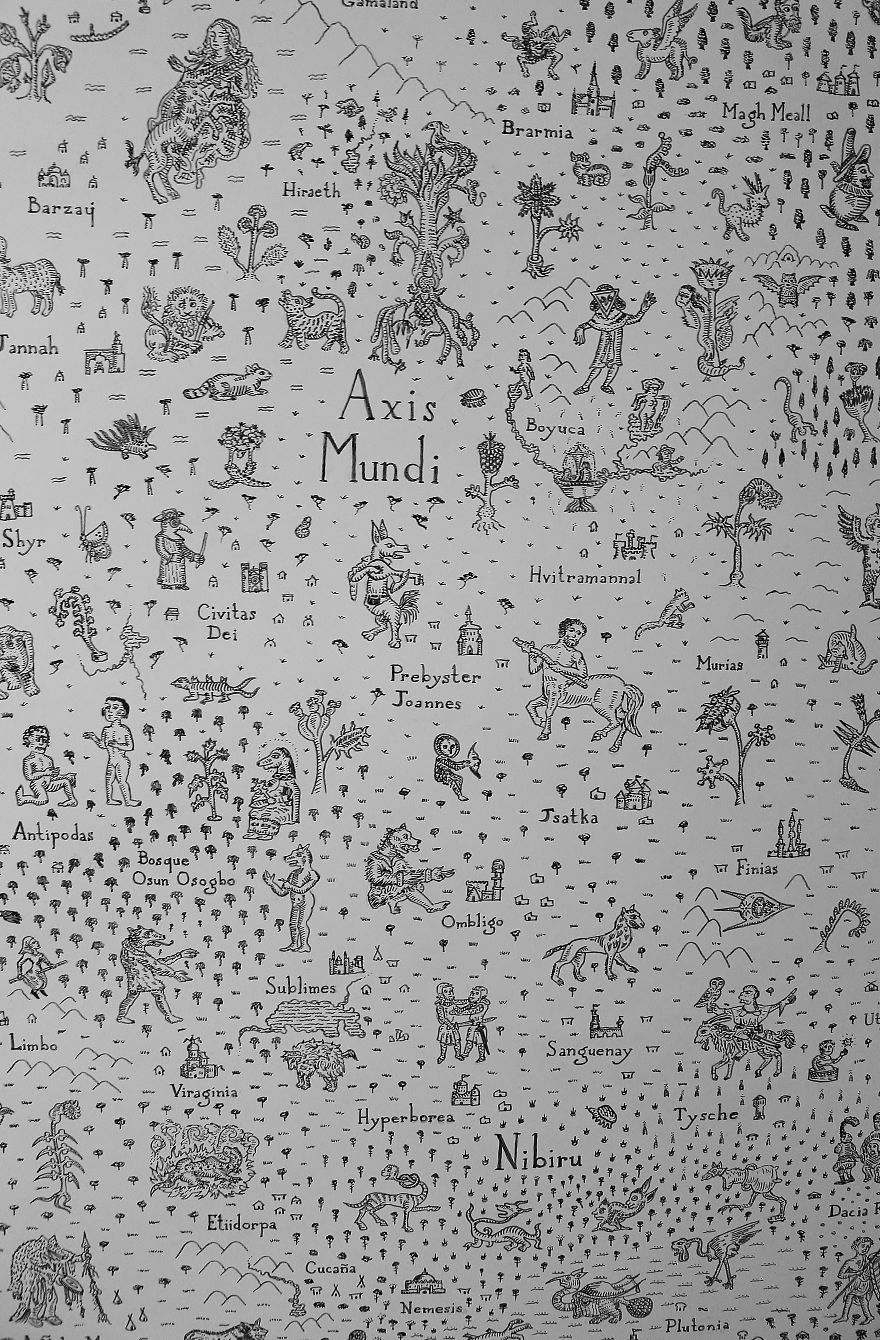 “In total, there were 13 kingdoms representing the different parts of the world. Each one had its valleys, forests, or cities. The names also came from real myths. 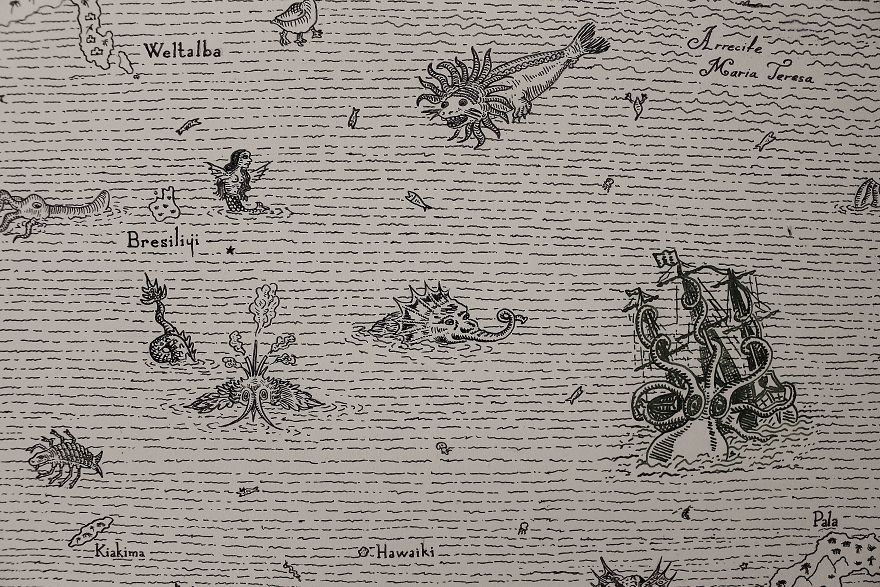 “The seas and islands are also real ghost islands from old-world maps. Every monster on the map was actually described as real at some point during medieval times.” 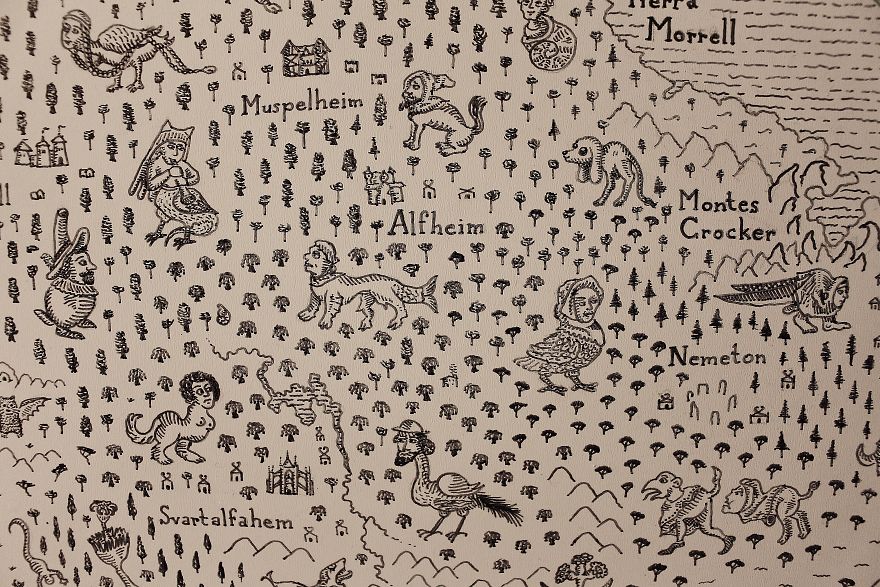 “The geography of places is also related to the world. There are weeping willows, pine and palm trees, oaks, mountains, cliffs, deserts, lakes, swamps, mangroves, and of course, the fountain of eternal youth.” 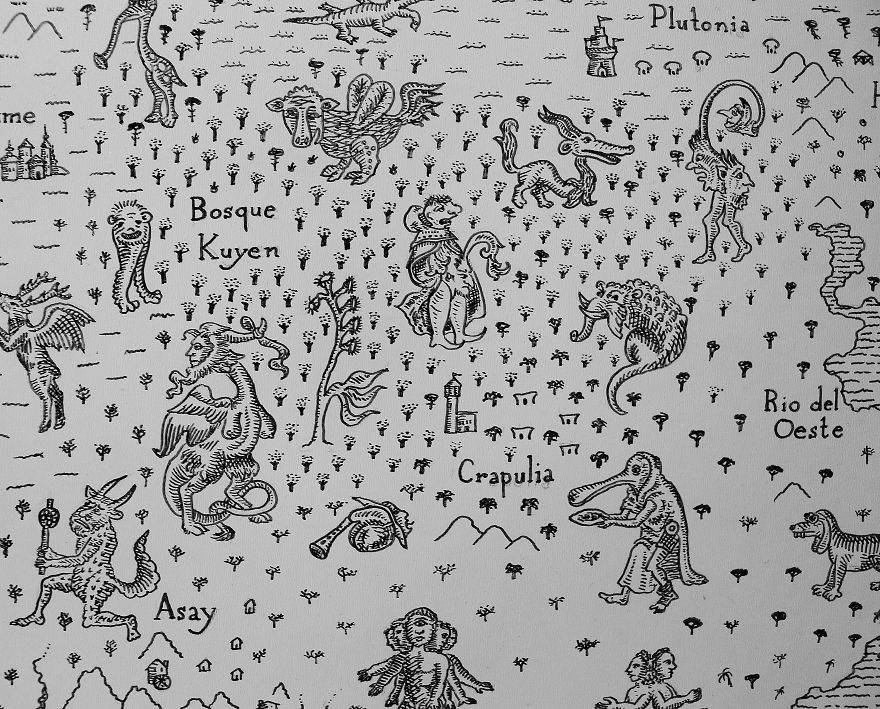 “There are miniatures scattered on the map that represent non-existent plants and trees such as the Mandrake or the Wak Wak. These also have their special place on the map. Some of them come from the enigmatic Voynich Manuscript.” 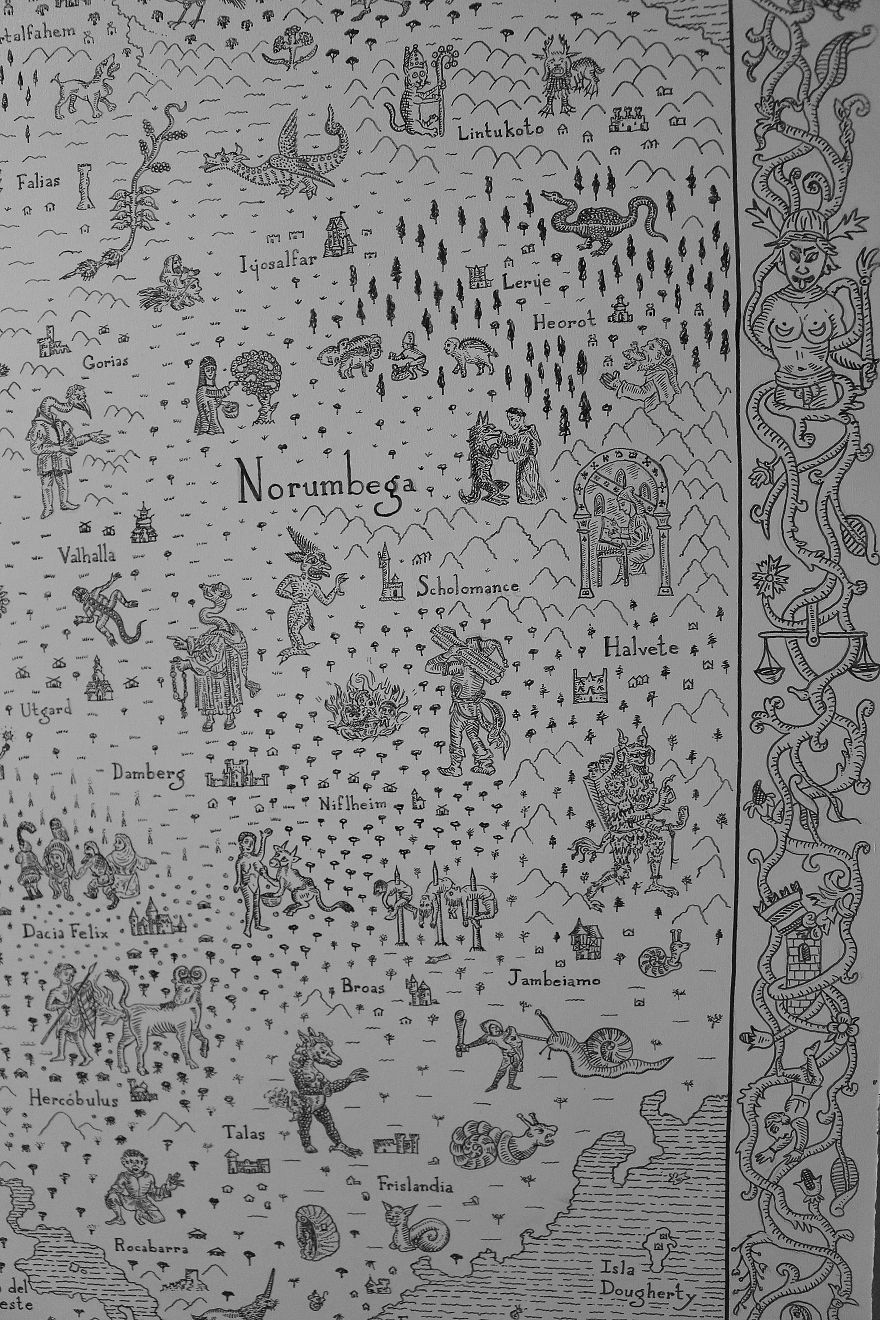 “Wrapped in a vine, I placed all the arcana of the tarot (a game typical of the medieval world) and among them are the different signs of the zodiac.

Above the door are the Celtic runes on different shields.

And there is a miniature near the city of Scholomance that represents all the secret societies that existed in medieval times.” 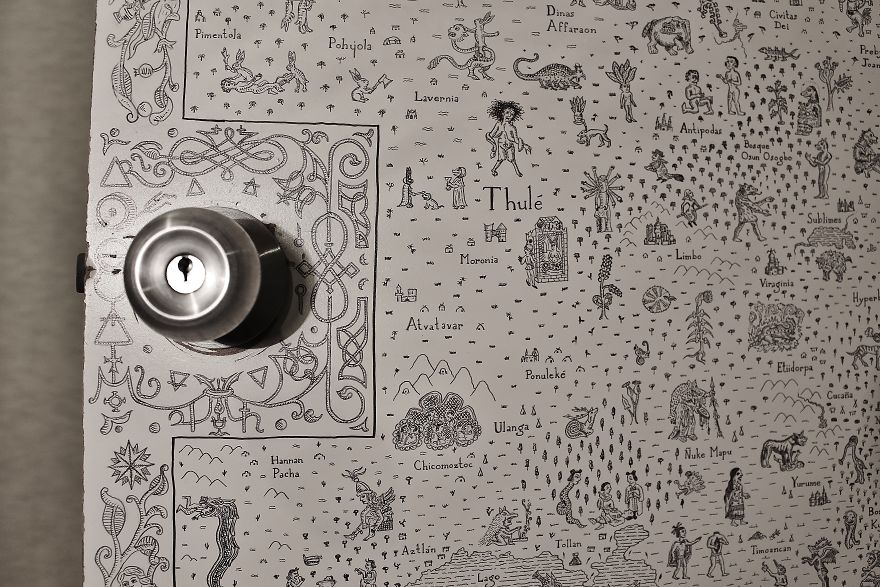 “Around the knob, the decoration conceals more than 25 symbols used by alchemists. All are ordered as is and as dictated by the formulas to convert metals into gold.”

The secrets of the frame 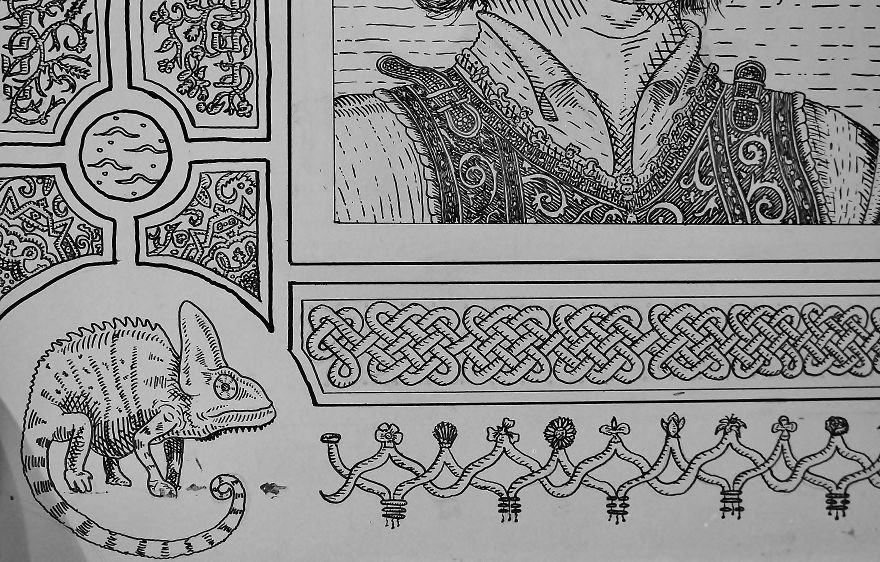 “Perhaps the place with the most hidden things is the frame. Animals are typical of the 4 elements (previously, it was believed that chameleons lived in the air.) In the circles are the 5 Chinese elements of Feng Shui.

Among the creepers, the 10 points of the Jewish Kabbalah are hidden written in Hebrew.

There are even the symbols of IChing, ancient symbols of good luck and various medicinal flowers.” 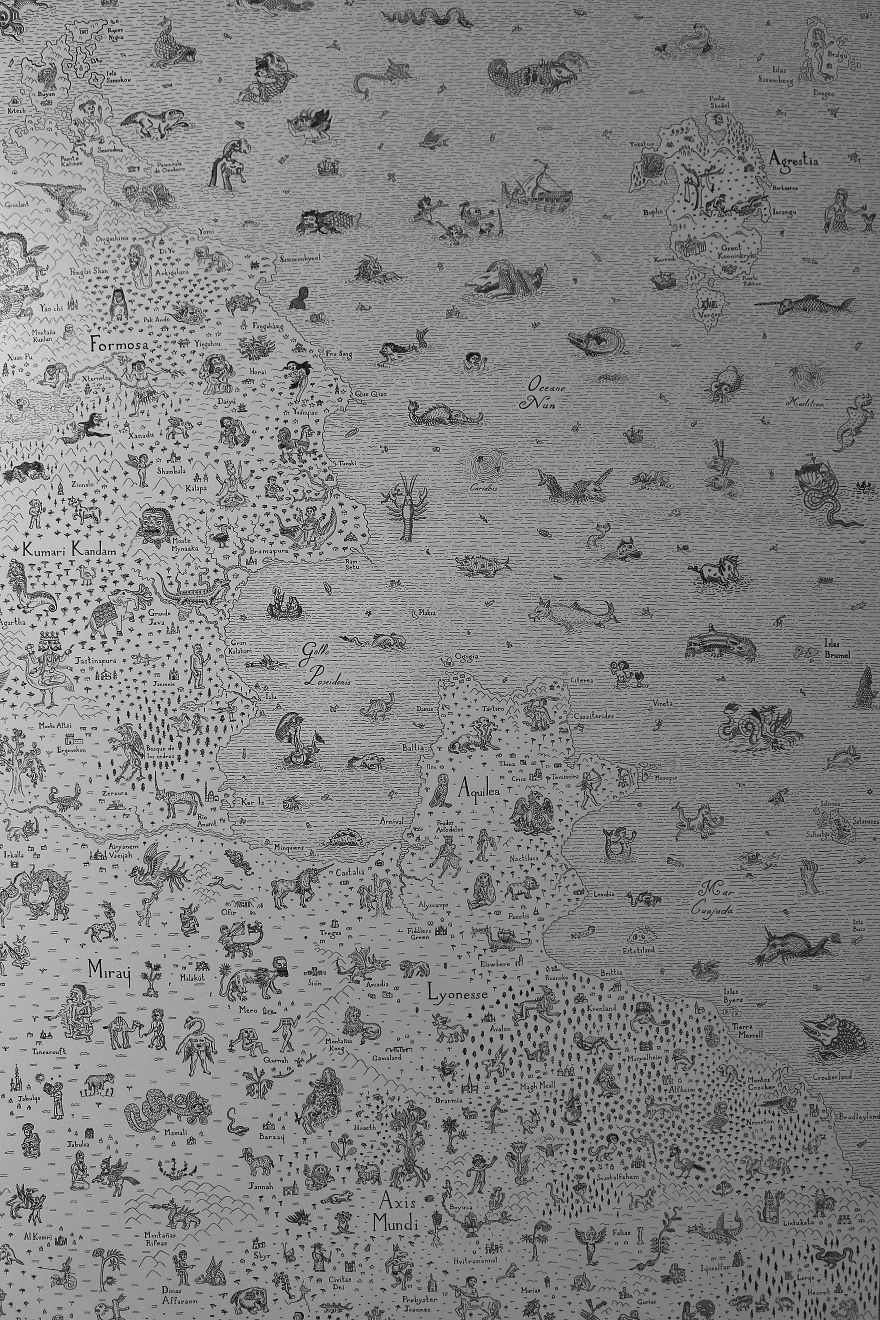 “At the end of the map and the whole journey I had while making it, I decided to baptize it as the “continent of Porta.”

In total, it took me 3 months to complete it, working day and night almost every day.”

25 Amazing 1970s Album Advertisements
"The Faces Of Fear": The Superb Dark Concept Art By Anthony Jones
"Not Longer Life": 6 Classic Painting Reinterpretations That Reflect On Consumer Society
Gustave Doré's Stunning Illustrations of François Rabelais' Gargantua and Pantagruel
Artist Started A Visual Diary Of Her Quarantine Lockdown
Bondi Icebergs Pool Converted into Giant Esky
This Artist Combines Human And Animal Features Into A Single Self-Portrait
This Absolutely Stunning Oreo Art Will Blow Your Mind
How Pripyat Would Look If Chernobyl Nuclear Disaster Never Happened
Hyper-Realistic Animal Pencil Drawings By Helen Violet
Psychedelic and Horror in Oil Paintings by Limp Bizkit Guitarist Wes Borland
120 Absurd Comics By Joseph Nowak
Street Artist Creates Guerrilla Posters on the Streets of New York City
When An Artist Turns Himself Into Superheroes Thanks To Body Painting
Who Says Girls Can't Repair Cars? Check Out These Amazing Photographs Of Women Auto Mechanics From The Early 20th Century
Artist Takes A Different Drug Every Day And Draws A Self-Portrait Under The Influence, Suffers Brain Damage
Reimagine Classic Movies Through The Acid-Trip Style Of Artist Dan Mumford
An Artist Is Drawing Famous Characters With Coronavirus References To Show Support For People Impacted By The Pandemic
Russian Artist Portrayed Retired Superheroes: Now They Are Nice Granny And Granddaddy
Street Artist Martin Whatson Incorporates Grayscale Characters Into His Colorful Murals
Old Thrift Store Paintings You'll Actually Want To Take Home
Digital Self: Artist Made 100 Digital Portraits In Support Of Ukraine
The Many Faces of the Tiger: Funny Drawings by Bu2ma
The World of the Wild (and Not-so-Wild) West: A Paintings by Morgan Weistling
door, map, medieval, mythology