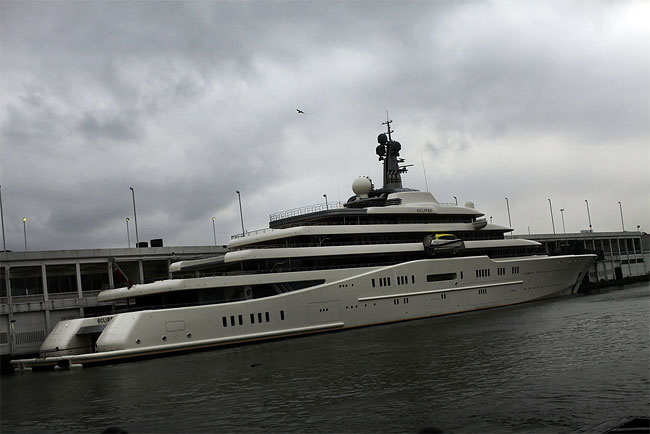 Eclipse is a luxury motor yacht constructed by Blohm + Voss in Hamburg, Germany. Its exterior and interior were designed by Terence Disdale Design and its naval architect was Francis Design. The yacht was delivered to Russian businessman Roman Abramovich on 9 December 2010. At 163.5 metres (536 ft) long, Eclipse is the world’s largest private yacht, 0.5 metres (1 ft 8 in) longer than the Dubai, which belongs to Sheikh Mohammed, the ruler of Dubai. The yacht’s cost has been estimated at €340 million (approx. US$475M as of September 2011), but a September 2009 report indicated that final costs could approach €800 million (US$1.12B). 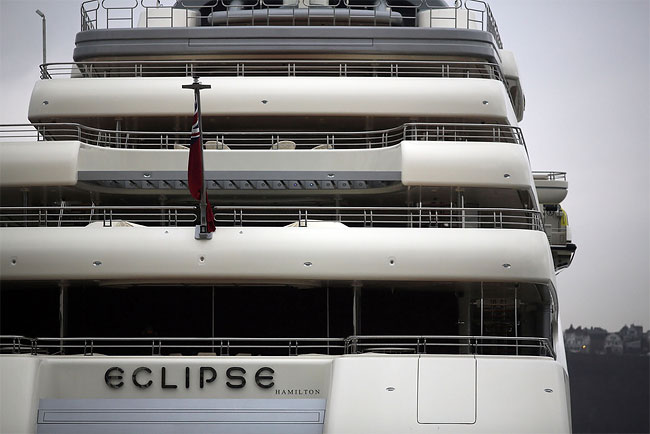 Eclipse has two helicopter pads, 24 guest cabins, two swimming pools, several hot tubs and a disco hall. It is also equipped with three launch boats and a mini-submarine that is capable of submerging to 50 metres. Approximately 70 crew members are needed to operate the yacht. 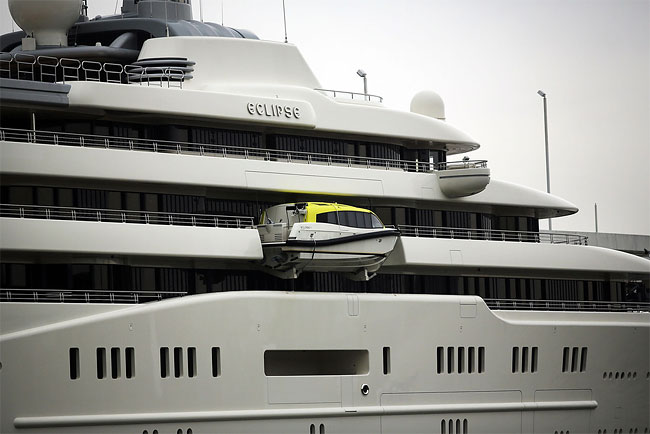 For security, Eclipse is fitted with intruder detection systems and a German-built missile defence system. Abramovich’s master suite and the yacht’s bridge are fitted with armour plating and bullet-proof windows. The yacht is reportedly equipped with an anti-paparazzi shield in the form of lasers that sweep the surroundings, and when they detect a CCD, they shine a light right at the camera to prevent the photograph. According to The Times, these do not run all the time, so friends and guests should still be able to take pictures. Instead, they will be activated when guards spot likely professional photographers nearby. How such a system could feasibly work has not been demonstrated, however. 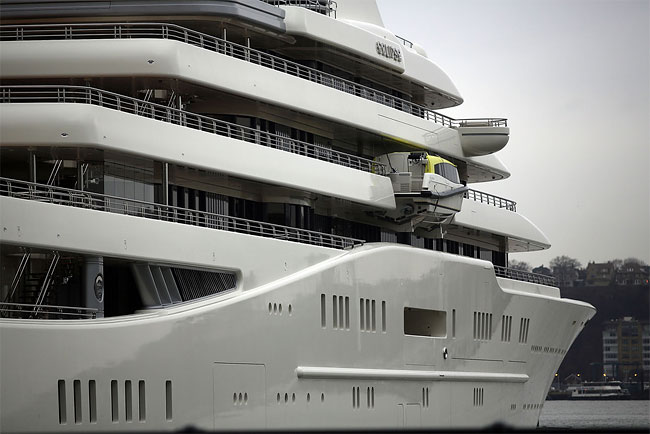 Eclipse was launched on 12 June 2009. It arrived in Frederikshavn, Denmark, on September 18, 2009, for tests, and was delivered to Abramovich on December 9, 2010. First pictures of the completed yacht were taken at Kristiansand, Norway, during its refuelling.

China: The Land Where Fake Brands Reign Supreme
Behemoth Bike: German Man Builds Heaviest Bike In The World
What If World Political Leaders Were Cars?
Photographer Captures Abandoned Second World War Fortifications Slowly Being Reclaimed By Nature
World’s Largest Vertical Garden Blooms With 85,000 Plants In The Heart Of Bogota
300ft-Long 'Airship' Unveiled In Britain Is The World's Longest Aircraft
Here Are The Most Interesting Things This Geologist Found On Google Earth
People From Around The World Edited These Man And Woman Headshots To Look Trendy In Their Country
2014 Sony World Photography Awards
It's a Snap: Travel Photos from Around the World
Source of inspiration since 2007. Proudly hosted by WebHostingBuzz.
Privacy Policy · Terms of Service · Content Removal Policy 🇺🇦 ❤️