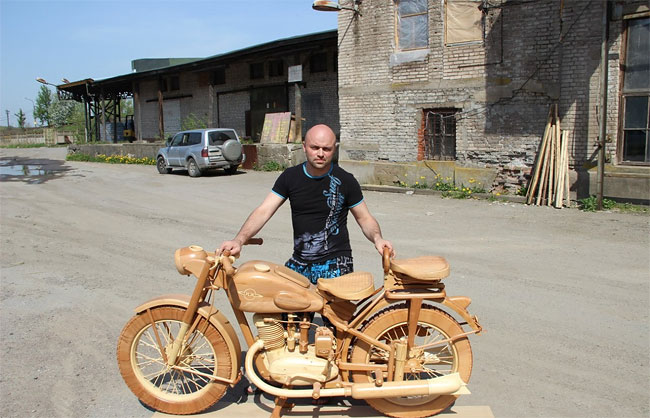 Yuri Hvtisishvili, a carpenter from Russia, has created an astoundingly perfect wooden replica of the legendary IZH-49 Soviet motorcycle. The life-size model is so realistic that you’d expect him to mount it and take off at any moment. 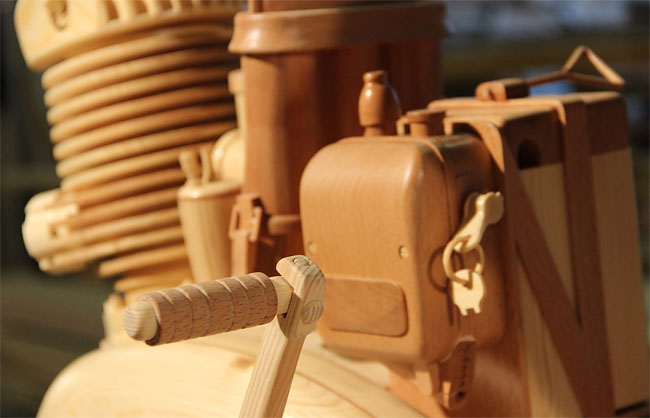 The idea for the project came to Yuri earlier this year, when business was slow at the carpentry shop where he works. He wanted to attempt something new and different, and that’s when he remembered something he saw on the internet – a master carpenter who had made full-scale models of motorcycles from wood. The idea inspired him, so he decided to replicate his favorite Russian motorcycle, the IZH-49. 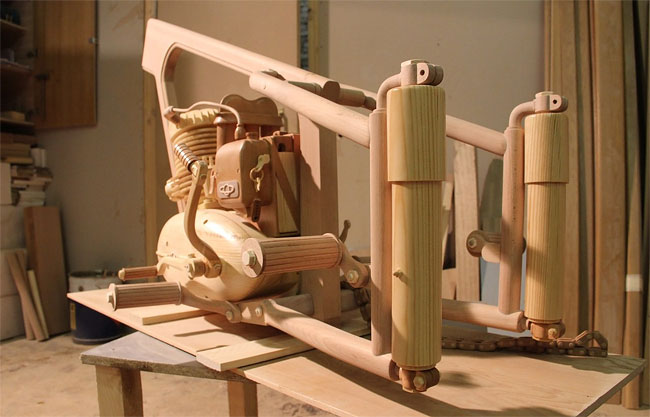 Yuri started to work on the project on January 18; it was the perfect activity to pass his time during the long winter evenings. He patiently carved out the motorcycle one part at a time, down to the last nut and bolt. He made use of two types of wood – beech and pine – mainly for the way they complement each other. Four months later, on May 18, the hyperrealistic motorcycle was completed. 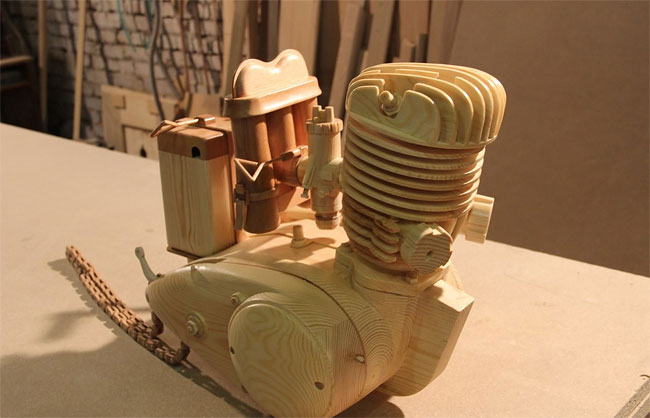 It’s amazing how Yuri managed to get everything right – the bike seat, the tank, the headlamp and especially the tyres look like the real thing, even though it’s made exclusively of wood. When he published pictures of his finished work on the Russian social networking website ‘Vkontakte’, they immediately went viral. People raved about his superior carving skills and praising the realistic look of his wooden motorcycle. 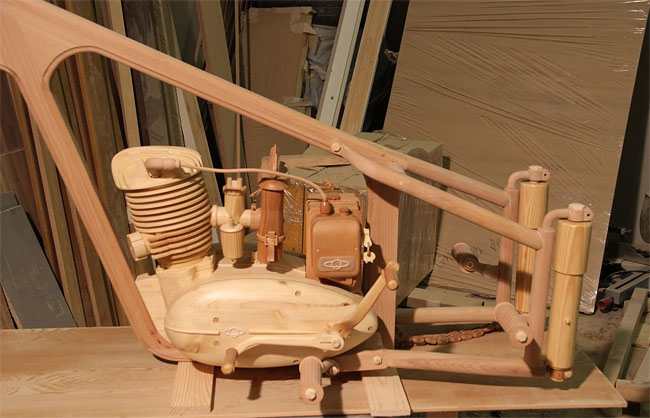 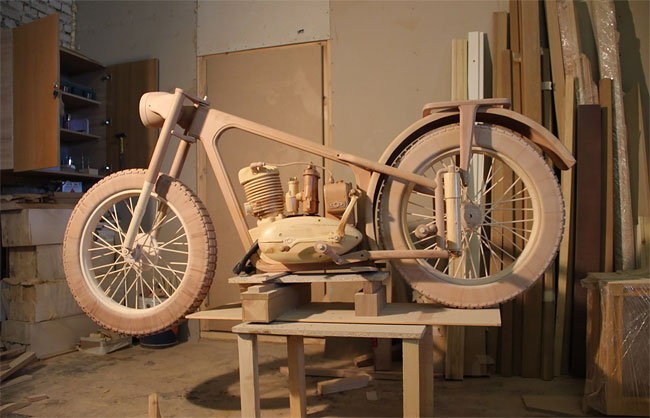 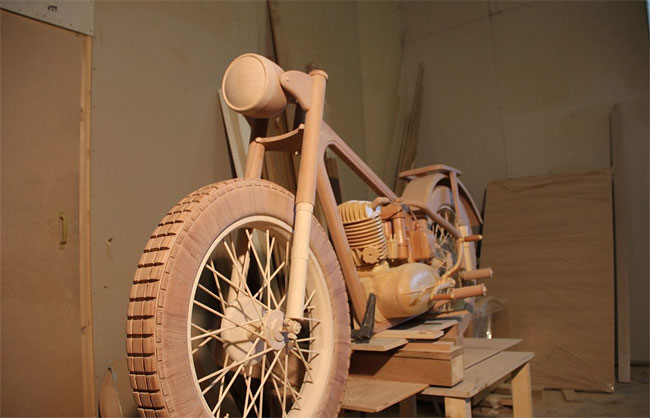 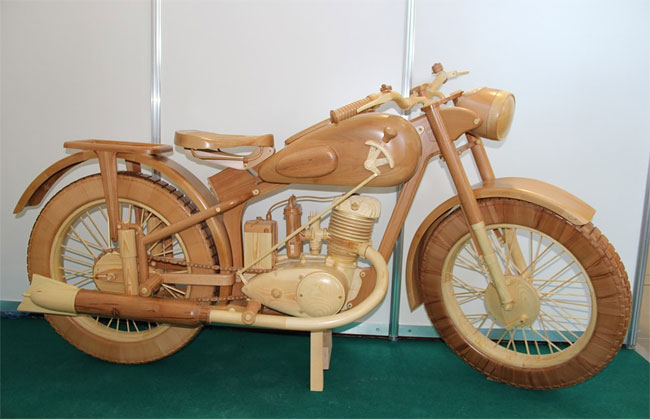 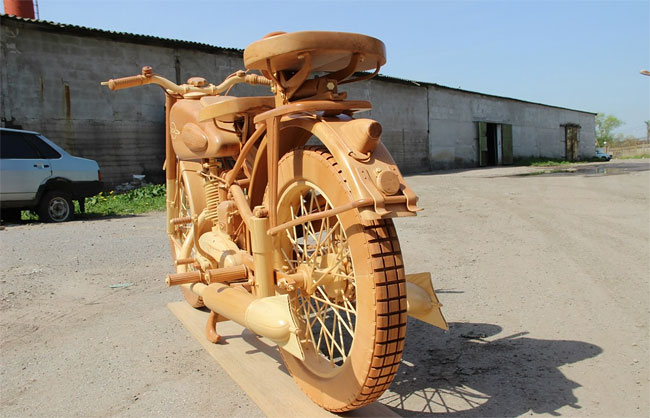 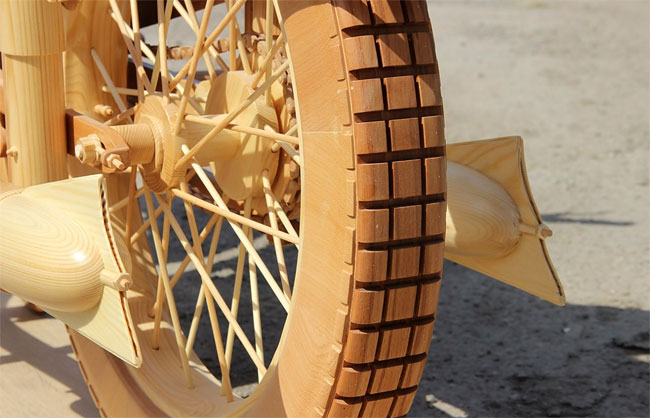 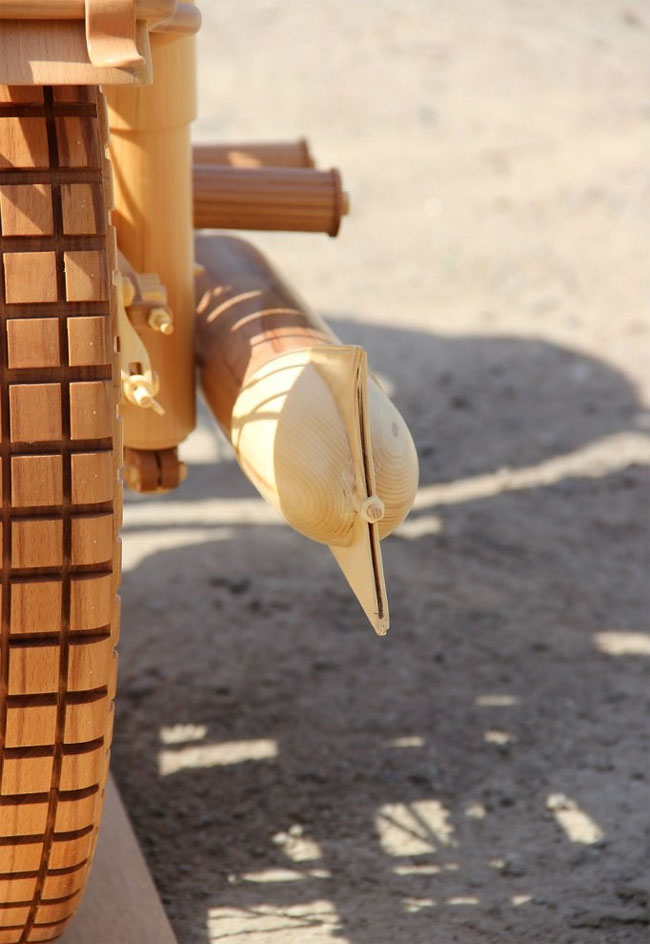 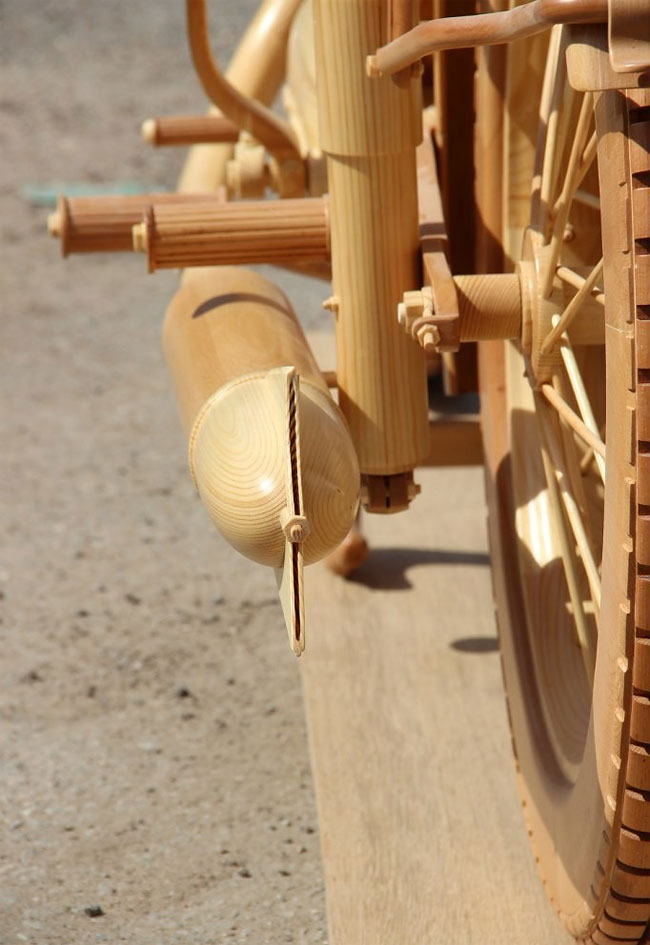 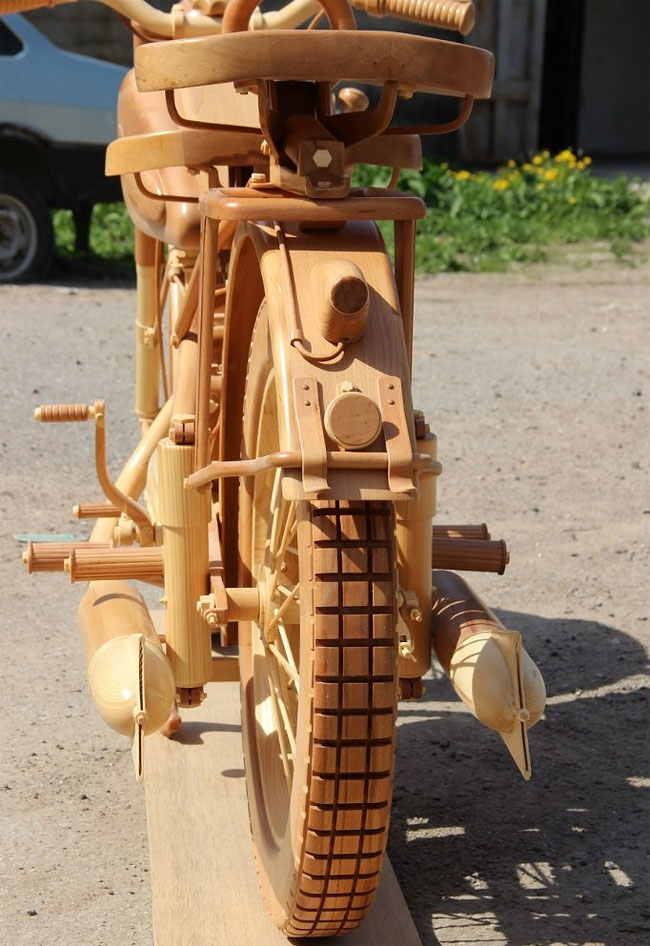 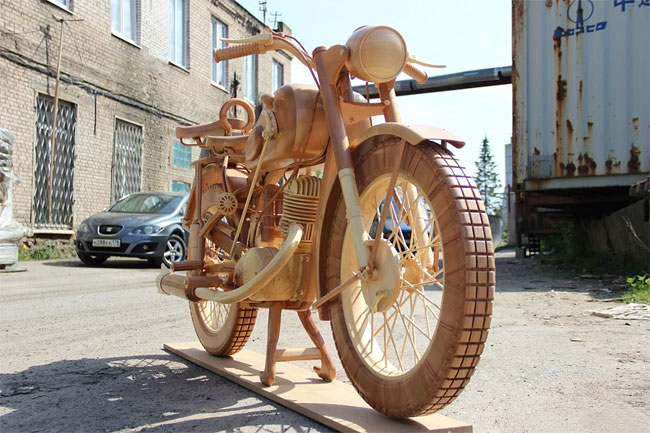 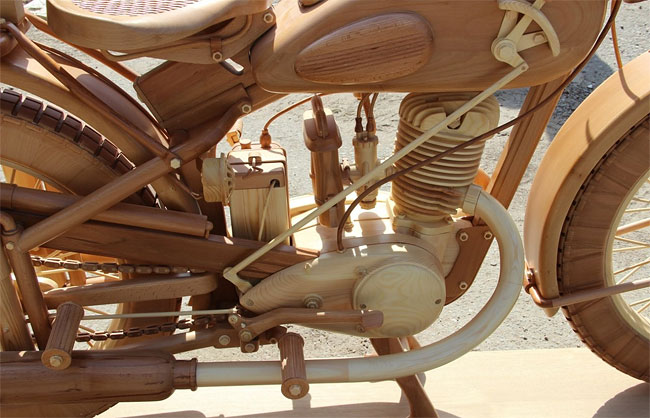 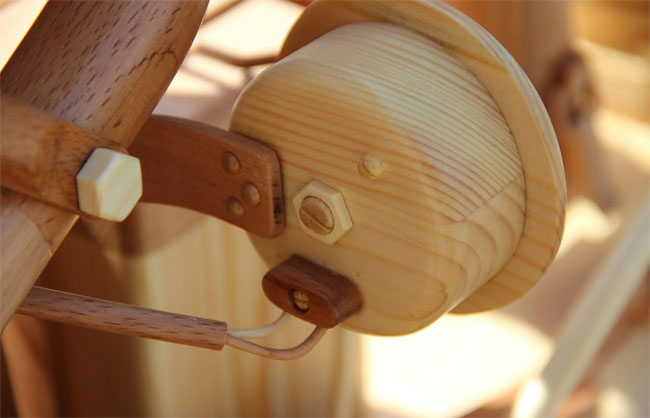 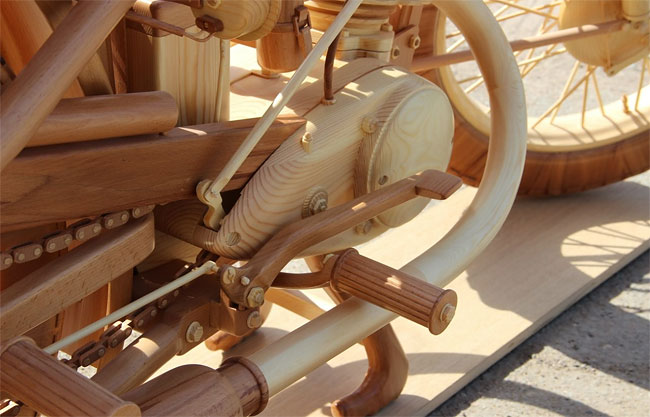 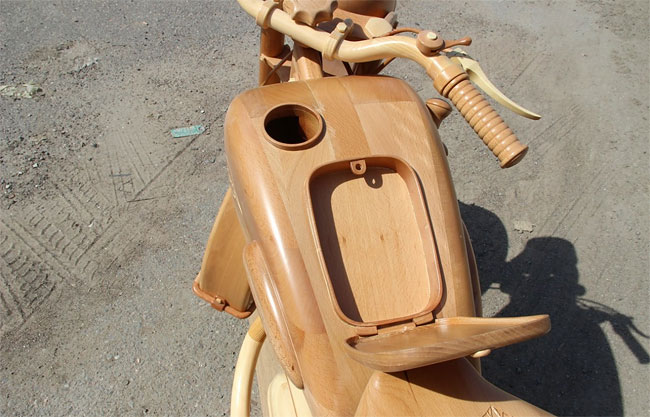 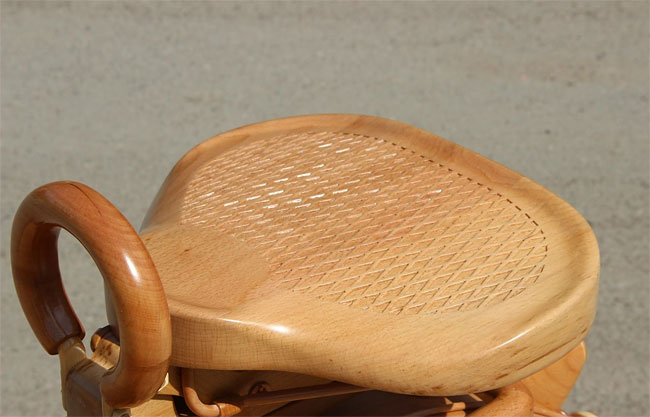 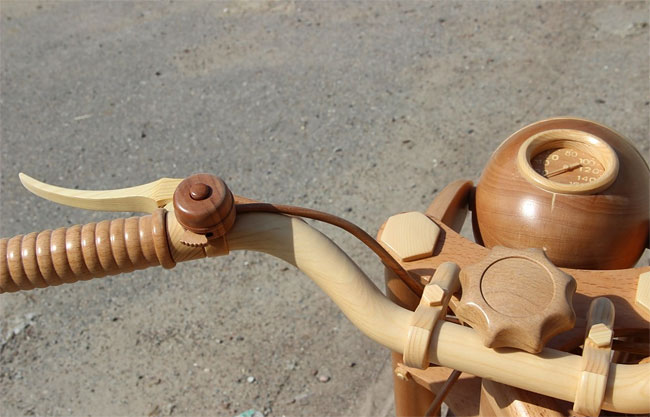 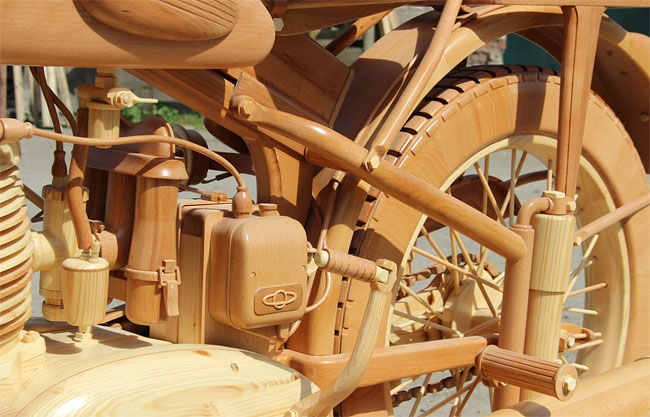 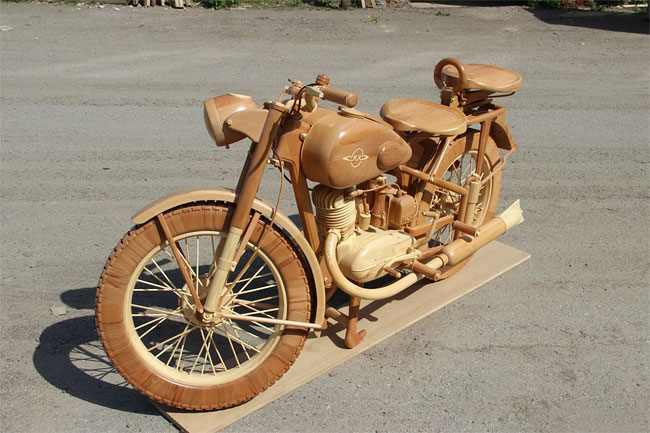 Merry Marijuana!
Incredibly Colorized Pictures Show The Life Of Russian People In The Past
Set Eyes to Stunned for Russian Yo-Mobile Concept
Meet Lisa Jelizaveta – Russian 7 Year Old Tattoo Artist That Will Make You A Wonderful Tattoo
Man Builds Replica of the «Nautilus»
Historic Photos Of Russian Beauties In Traditional Costumes Prove Slavic Beauty Never Gets Boring
Russian Woman Who Suffered From Alopecia Now Has Beautiful Long Hair
Artist Creates Impressive Portraits Using The Humble Kitchen Salt
Digital Artist Shows You How Much Time She Takes To ‘Perfect’ Each Illustration
This Artist Creates Magnificent Portraits On Maps
Tons Of Juice Flooded The Streets Of Russian Cities
This Artist Creates Beautiful Figures Of Olympic Athletes Out Of Layered Paper
Photographer Creates Imaginative Images Of Her Daughter And Her Shadow
This Engineer Creates Incredible 3D Calligraphy That Leaps Off The Page
Watch This Russian Piece Of Junk Transform Into The Van Of Your Dreams!
Assistant Professor Of Biochemistry & Molecular Biology Creates Amazing Precise Metallic Replicas Of Ancient Fossils And Cells
Terrifying Russian Architecture Which Looks Better From Above
Passion For Cosplay: How A Russian Manager Imitates Hollywood Heroes
Artist Creates Epic Mashups Of The Most Famous Artworks In History And Contemporary Pop Culture
This Artist Creates Super-Abusive And Cute NSFW Greeting Cards
Mum Creates Incredible Braids For Daughter Every Day Before School
Russian Artist Carves Silver Dollar With Trap Jaws And Golden ‘Bait’ Coin
Cereal Tea Bags, for When All You Want is The Milk at the Bottom
Scaring Cakes Made by American Photographer
creates, motor, motorcycle, perfect, russian