Elderly Blind Man and His Armless Friend Plant Over 10,000 Trees in China 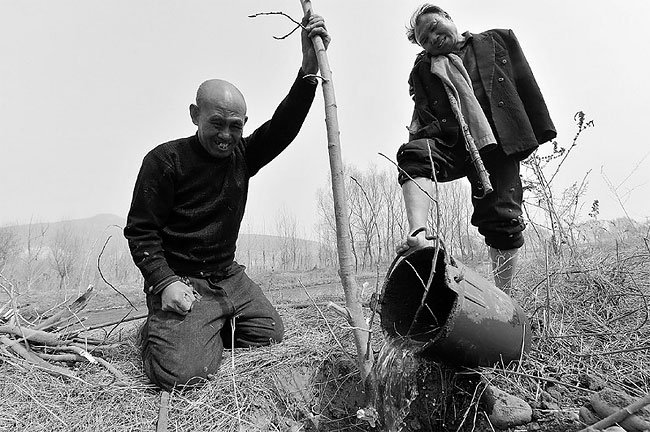 Looking at the lush, green, tree-filled stretch of land north of the Yeli Village in Sunzhuang Township, Jingxing County, Hebei, China, it’s hard to imagine that just 12 years ago, those plains were filled with nothing but rocks and weeds. This miraculous transformation is all thanks to the hard work and dedication of an elderly blind man named Jia Haixia and his friend Jia Wenqi, a double amputee with no arms. For more than 10 years, the duo have been planting thousands of trees in an effort to protect and preserve the natural ecology of the land surrounding their village. 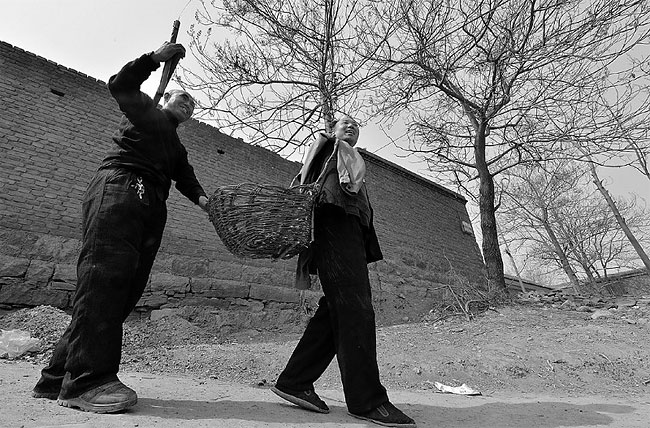 53-year-old Haixia was born with congenital cataracts that left his left eye blind. Then, in 2000, he lost his other eye in an accident at work, leaving him completely without sight. Wenqi, also 53, lost both his arms in an accident when he was just 3 years old. After Haixia became fully blind, the two friends were having trouble securing jobs, so they decided to lease over eight acres of land near the riverbank from the local government with the goal of planting trees for future generations. While working towards this noble objective, Haixia and Wenqi have also been able to help protect their village from flooding, while also earning a modest income from government funding. Each morning, the two friends rise at 7AM and then head out for a day’s work. With little money to buy saplings from the store, they rely on taking cuttings from grown trees and planting them to create new life. After years of living and laboring side by side, the close duo have learned how to work together in order to overcome their individual disabilities. Wenqi often carries the sightless Haixia on his back across the rushing river, while Haixia climbs to the top of trees to cut off the boughs that will become new trees. After climbing back down, Haixia digs holes in the ground to plant the cuttings; it is then Wenqi’s job to take care of the growing saplings by watering them. With this unique system of teamwork, the friends estimate that they’ve planted over 10,000 trees in over a decade. 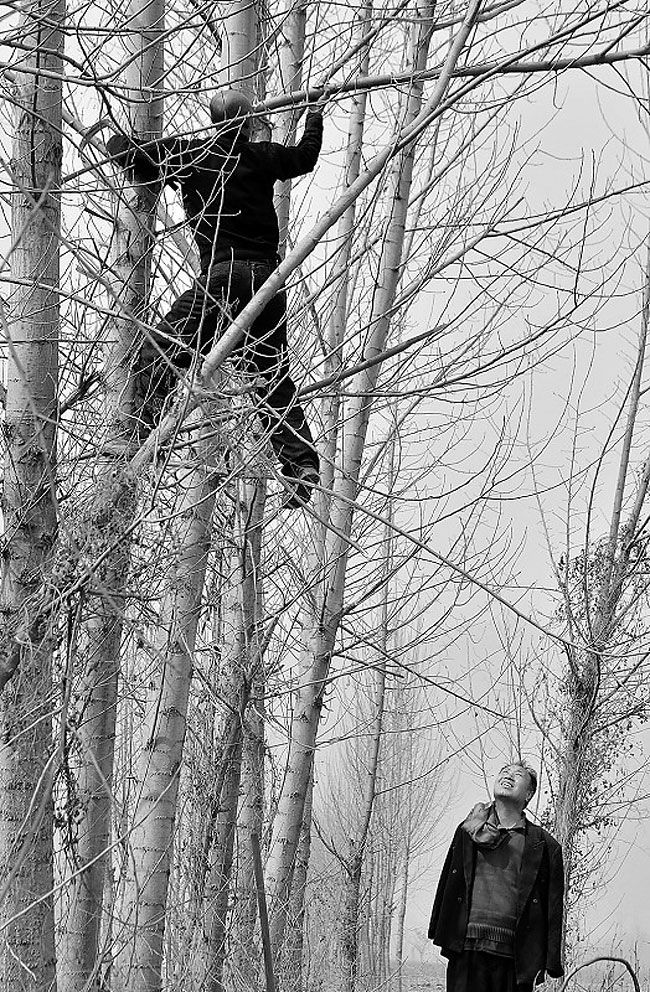 Haixia and Wenqi have received a tremendous amount of attention and support after news of their heroics went viral in China. According to Hebei Haoren, some generous souls have donated money to provide the elderly duo with pensions to support their lifestyles. Another article from Xinhua News Agency shares the exciting news that Haixia may be able to regain sight in his left eye thanks to an operation that a team of health care professionals are willing to perform for free. From the heartwarming story of these two friends, it seems true that no good deed goes unnoticed! 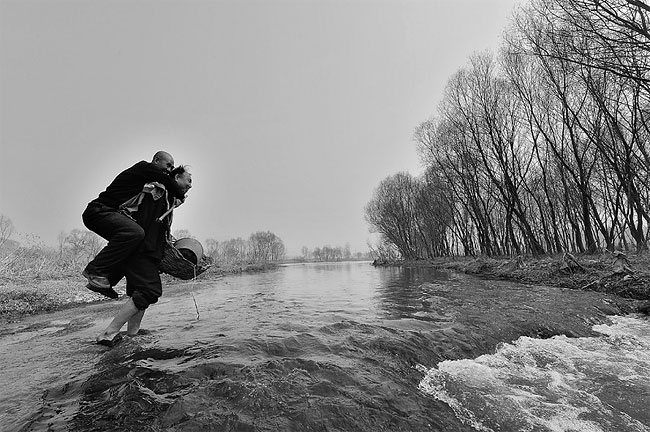 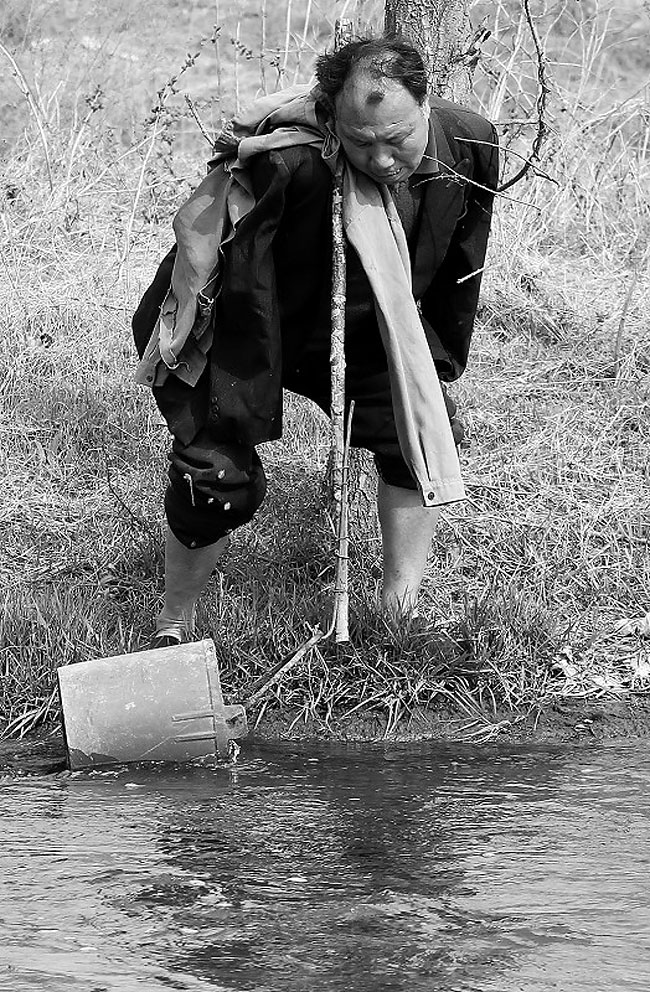 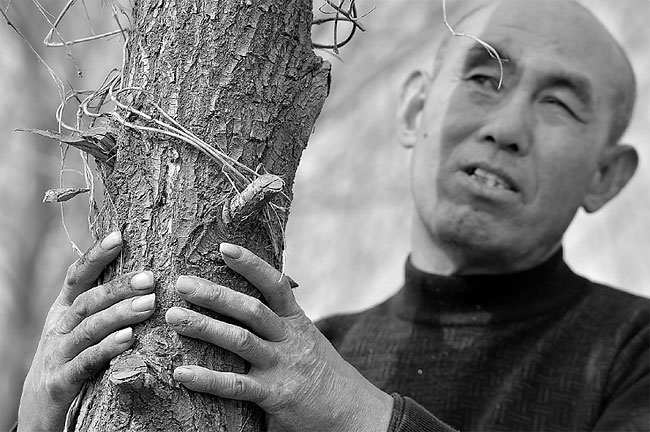 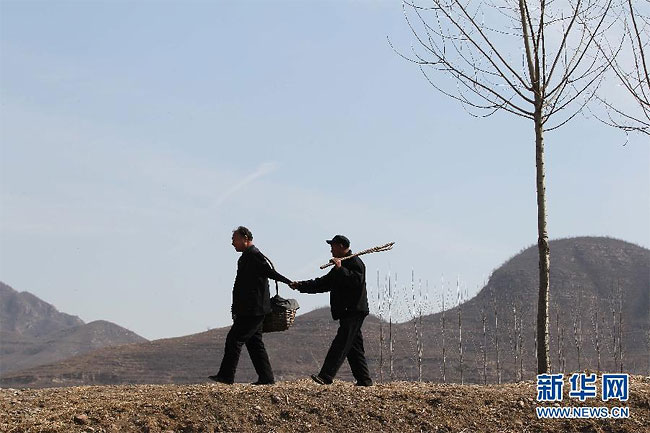 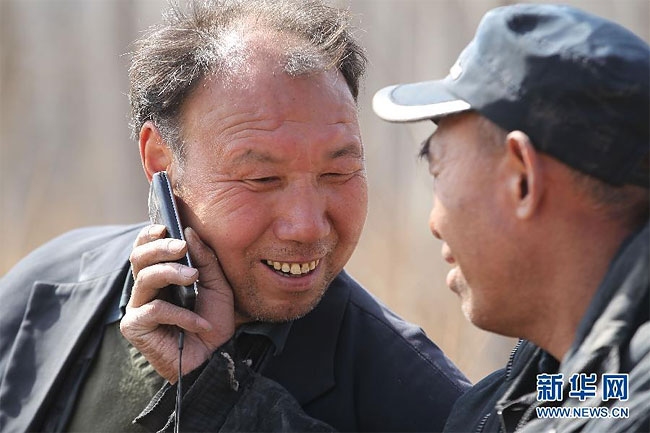 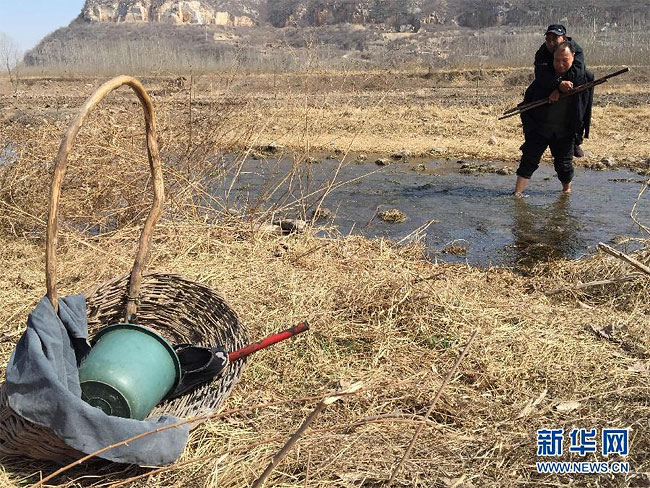 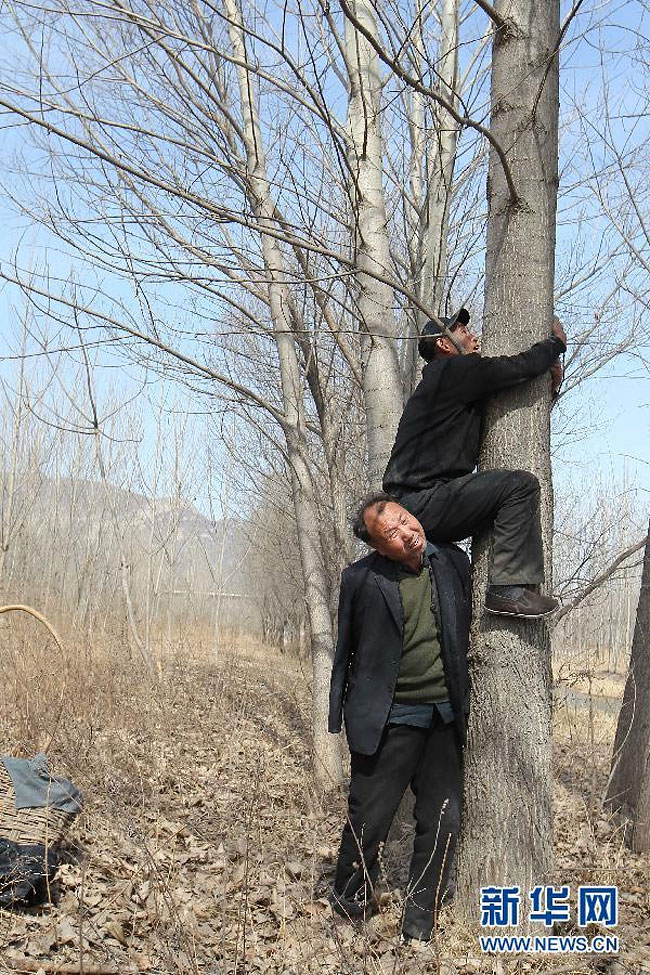 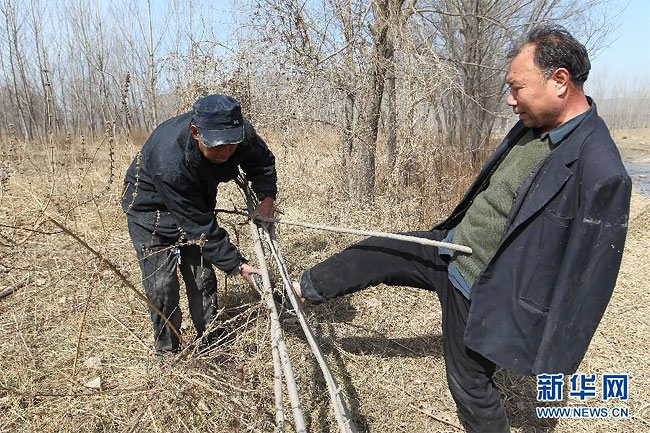 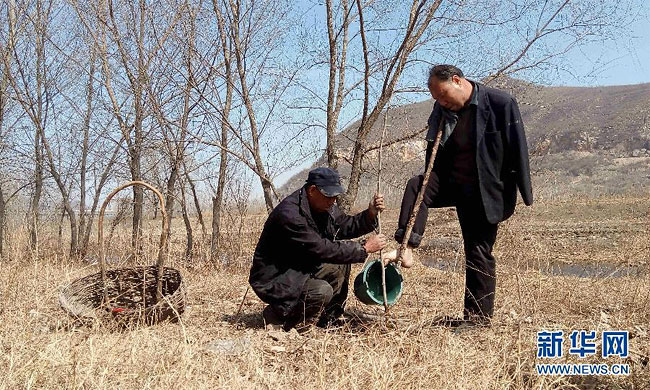 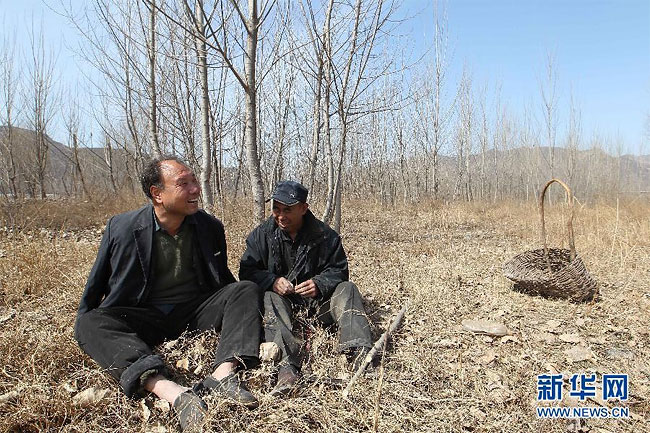 Waldo Is A Real Guy And You'll Love Following His Adventures
Photographer Creates Inspiring Pictures Showcase The Splendor Of The Natural World, Using People To Highlight The Beauty And Scale Of These Epic Landscapes
The Pantone Cafe Serves The Colorful Meal Of Your Dreams
Incredible Photos Of The Record Breaking Snowfall Night In Reykjavik, Iceland
Paris versus New York
Earth, Then And Now: Dramatic Changes In Our Planet Revealed By Incredible NASA Images
Adorable 'Little Monks' In Chongqing Go Viral Online
This Woman Restored An Old Van To Make All Her Traveling Dreams Come True
Rare Photos Of Germany Before It Was Destroyed By War
Tokyo Hotel Launches Futuristic Lantern Dining to Beat Coronavirus
Wide Seats And Plenty Of Legroom: These Old Pan Am Photos Show How Much Airline Travel Has Changed
Couples Can Now Get Married In The Middle Of The Indian Ocean
Fountains Of Saint Petersburg The Way They Look Now
Meet "Birrabus" – A Former School Bus Transformed Into A Beer Truck!
Mysterious Sinkhole Develops A Surprising And Beautiful Ecosystem In China
Inuits from Remote Russia Get Used to being Photographed for the Very First Time
Inside The Abandoned Summer Camp In Chernobyl
Harvesting a Tea Plantations in Himalayas
Beautiful Gingkgo Trees Attract Visitors
This Adventurous Couple Who Are Paid To Explore The World Will Give You A Serious Case Of Wanderlust
Beautiful Abandoned NYC In Photographs By Will Ellis
The World’s Most Unusual Beach Is A Glacier In Russia’s Kingdom Of Permafrost
Curated Images And Textures From Google Maps
A Rare Look Inside North Korea
armless, blind, elderly, friend, plant, trees

Is This Terrifying Swing Over a Hawaiian Valley Your Worst Nightmare?
Monumental Plant Sculptures at the 2013 Mosaicultures Internationales De Montreal
Armless Man Dreams of Teaching
What a Dick: The Porniest Grave in Paris's Père Lachaise Cemetery
Probably, This Is The World’s Most Peaceful Toilet
Stewardess Skill Training In China
Diving with Sharks
Agoraphobic Artist Travels The World Without Leaving Her House
Instead Of Selfies, A Couple Draws Doodles To Document Their Journey
GrelkaFest 2019: The Annual Bikini Ski Day In Siberia!
2007 ‒ 2023 by Design You Trust. Proudly hosted by WebHostingBuzz.
Privacy Policy · Terms of Service · Content Removal Policy ❤️ 🇺🇦