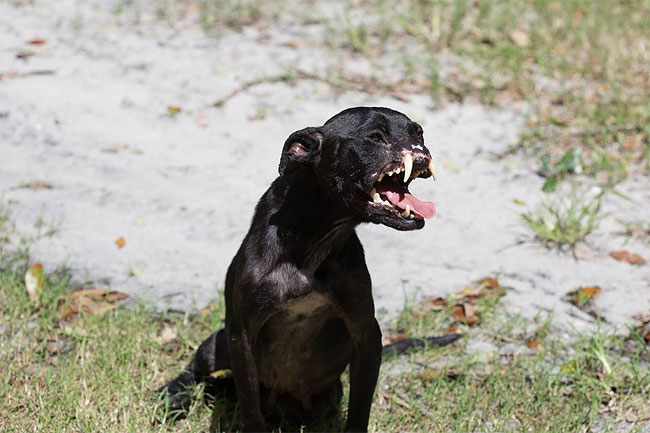 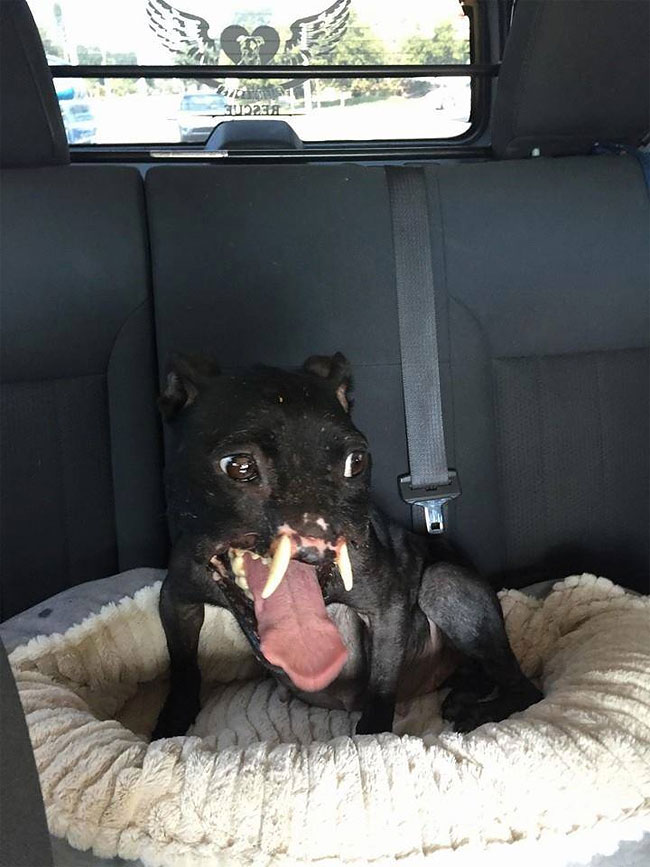 Stephanie Paquin, the founder and director of the dog fostering group Passion 4 Pits, told BuzzFeed News she and her husband, Mike Fleury, rescued Khalessi from an Orlando shelter on Aug. 8. 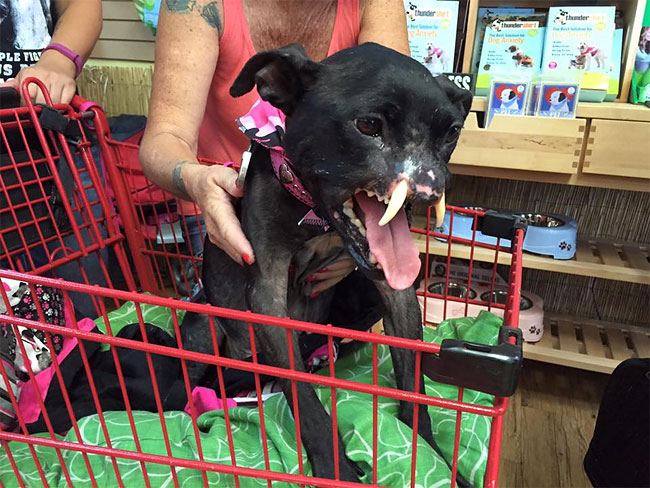 The pair had been at the shelter to pick up another unwanted pit bull set to be euthanized, when the shelter manager asked if they’d be prepared to take in a very special dog. 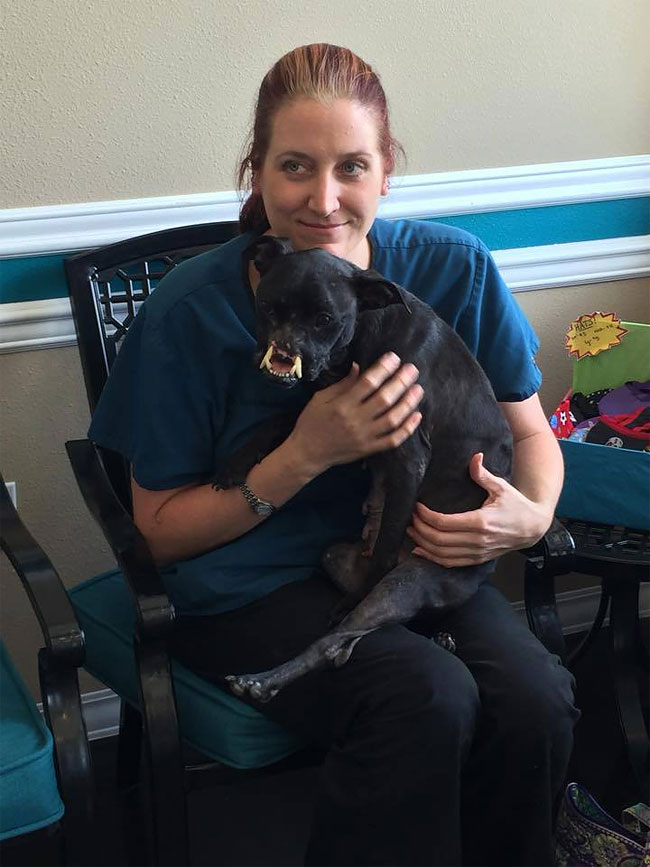 The dog, who’s believed to be under 2 years old, had been found dumped on the lawn of a senior citizen’s house some three days before. 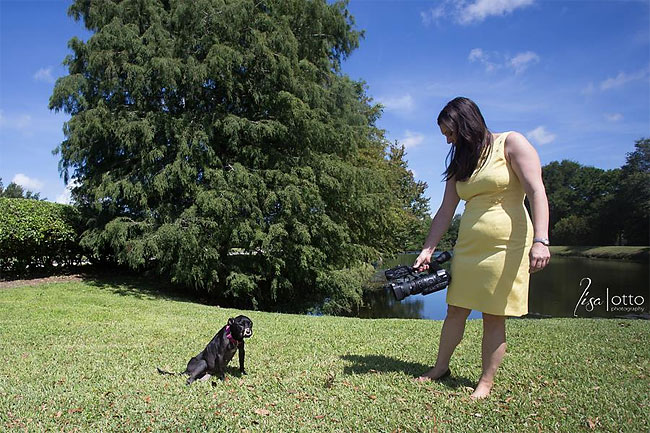 Paquin, a veterinary assistant, said she was warned before she met Khalessi that the dog had been physically deformed as a result of the abuse she had suffered, but she and her husband were still overcome with emotion when they laid eyes on her. 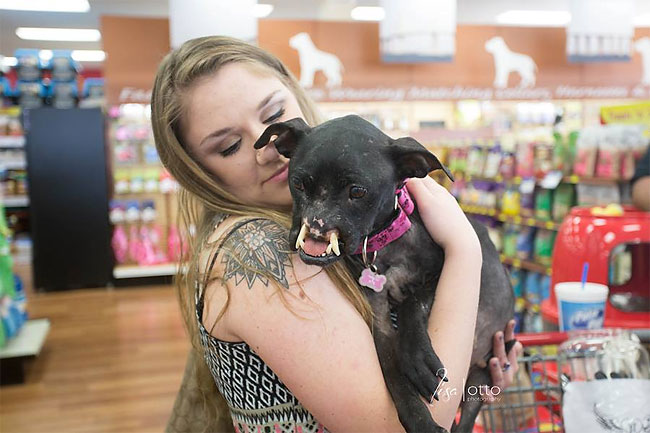 “We met her and I just immediately started to cry,” Paquin said. “Her eyes are so happy and she’s so joyful to get any attention. She’s wriggling and her tail is wagging, but you can see the damage that has been done to her face.” 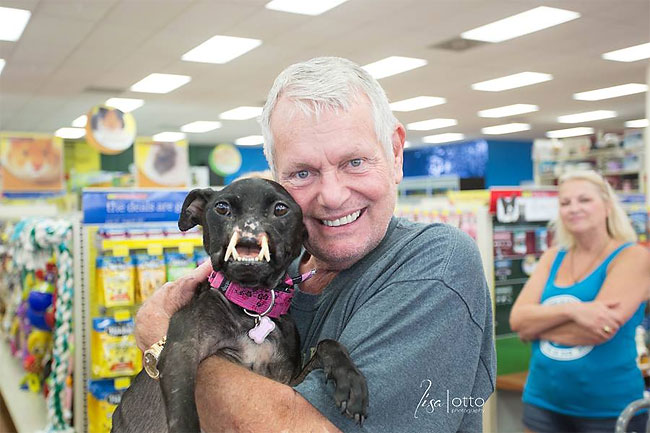 “She was so happy, but I was trying so hard just to keep it together.” 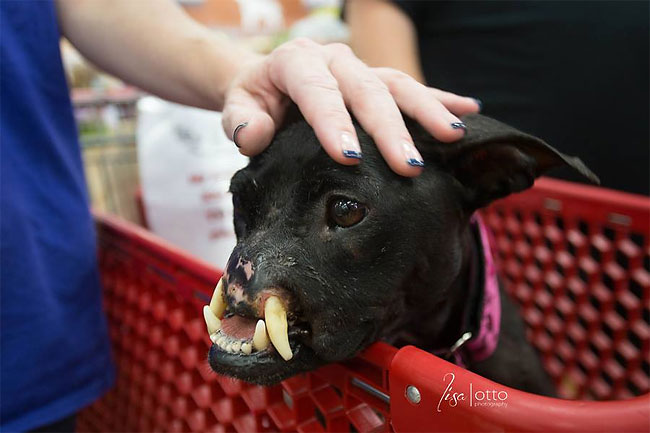 The Orlando vet told Paquin that Khalessi had been “systematically abused” over a long time, with the dog missing a nose and sinus cavity, as well as suffering a broken back, broken ribs, and hind legs that no longer work. 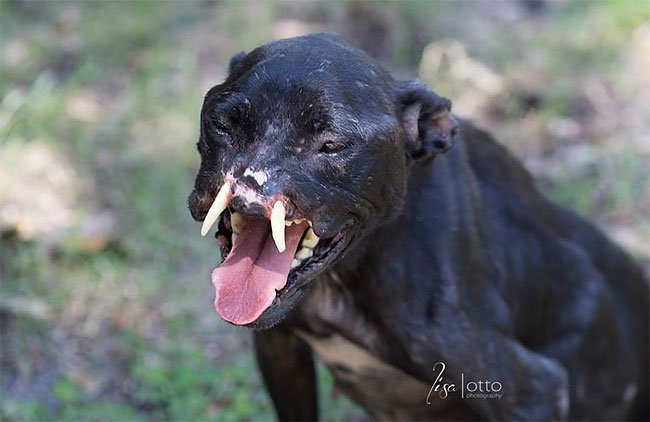 The homeowner who first called animal services wasn’t able to get a good look at the car that dumped Khalessi, giving police little to go off in their search. 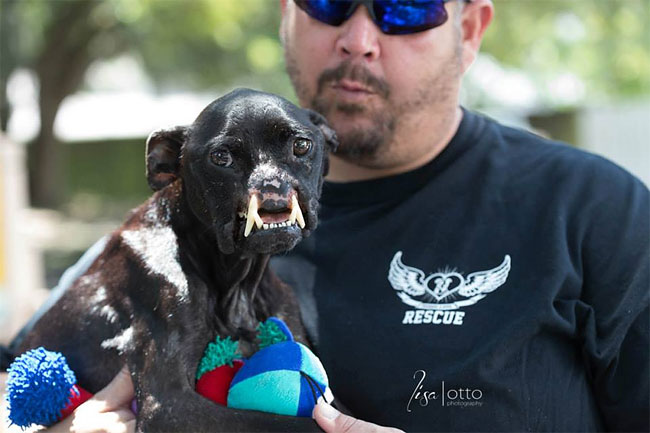 Paquin said she hopes that news coverage of Khalessi’s story will lead to someone recognizing the dog so that her abuser can be found. 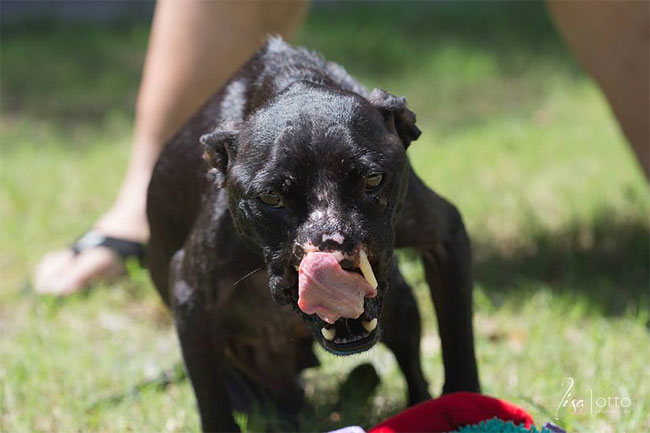 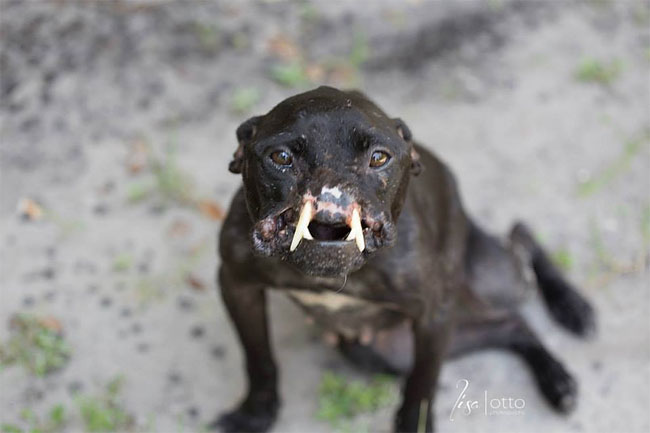 Anti-Coyote Vests For Dogs Are More Punk Rock Than You'd Expect
Photographer Catches Squirrel Stopping To Smell A Flower
These Portraits Reveal The Incredibly Humanlike Expressions Of A Variety Of Apes
Goran Anastasovski Captured Stunning Photos That Show How Precious Animals Are
This Guy Makes 3D Printed Helmets For His Cat
Foxy Faces: Photographer Proves That Every Fox Has Different Personality
Bioluminescent Sea Fireflies Glittering Like Diamonds On The Rocks And Sand
Orphaned Baby Owls Get New Home
Cats Fuku-Chan And Daikichi Find Fame Travelling Around The World In A Converted Pushchair
"See The Extraordinary And Make It Still More Extraordinary": Contemporary Art Paintings By Stanislav Plutenko
Cute Little Sea Lion by Jon Cornforth
Photographer Alicia Rius Captures The Beauty Of Bald Cats
Dutch Photographer Marcel Heijnen Documents The Secret Lives Of Cats Living in Hong Kong’s Stores
Ten Cats Who Were Painted By Nature Itself
Japan’s First Female Photojournalist Is Still Shooting At The Age Of 101
World's First "Kitten Bar" Opens in Japan
Dog Shopkeeper from Musashi-Koganei,Tokyo
"Spring And A Girl": Cute Friendship Between A Snow Fox And A Human
A Black Cat Interrupted A Football Match And Unsurprisingly Refused To Leave
This Twitter Account Posts ‘Poorly Drawn Animals’ And Here Are The Funniest Ones
Meet This Colorful Australian Peacock Spider
This Pet Dentist From Alaska Conquered The Internet With His Indescribably Cute Dogs
Today Wouldn’t Be Complete Without Marvelling At This Gorgeous Ginger Cat
Bear Smells Brownies — And Does Whatever It Takes To Get Some
deformed, despite, horrific, spirits, still, suffering

Little Wild Boar Thinks He’s A Cow So Moves In With German Cow Herd
Rescued Magpie Becomes Lifelong Friend With The Family That Saved Her Life
Want to Join the Jet Set? Water-Powered Jetpack Propels Fliers up to 30ft into the Air... but it still Costs $230 a Go
Orphaned Raccoon Thinks She's a Dog After Being Rescued and Raised by Family with Dogs
Stunning Winners Of The 2018 Dog Photographer Of The Year Contest
The Serengeti Lion by Michael "Nick" Nichols
Using a Strip of Paper To Give Birds Funny Eyes Is Ingenious
Panda-suited Pickers
These Incredible Cute Rodents Change Color Under UV Light
Vancouver Cops, Four-Legged Pals Pose For 2019 Police Dog Charity Calendar
Source of inspiration since 2007. Proudly hosted by WebHostingBuzz.
Privacy Policy · Terms of Service · Content Removal Policy 🇺🇦 ❤️