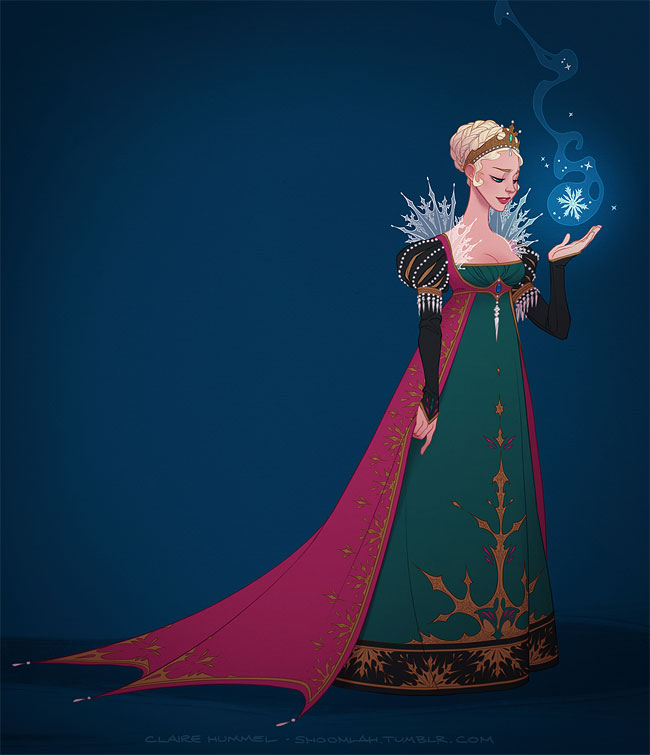 Have you noticed that while every Disney princess has grace, strength and style, their dresses aren’t exactly the most realistic to the time periods they inhabit?

Claire Hummel is production designer for TV and video games by day and Disney fashion historian in her spare time. With her extensive skill and knowledge of fashion, she’s created a historically accurate version of Elsa’s coronation gown and tweaked it a bit to look like her ice gown as well.

Take a look at Elsa’s gorgeous Scandinavian dress below. 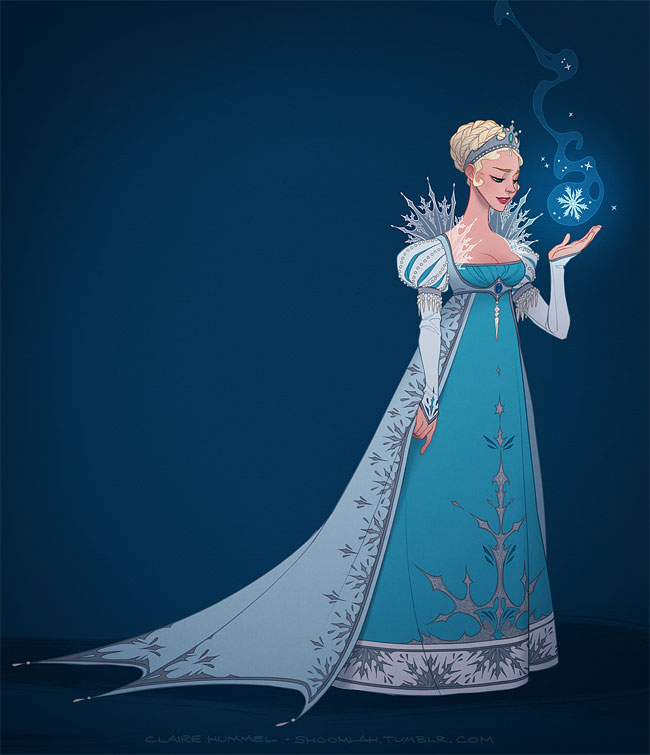 “Oh, Elsa. What are we going to do with you.

Frozen is purportedly set in the 1830’s-40’s, but I’ve been obsessed with finding a style that could marry her coronation gown with her ice gown more seamlessly; the open robes you see during the Regency era, including those being worn by Scandinavian royalty at the time, seemed a particularly apt analog for her… weird underarm-cape. Thing. You also see her mom wearing something very similar for something like ten years, so it’s not a huge stretch to think it could be a popular look in Arendelle. THAT’S MY EXCUSE.

I initially designed this for her coronation, but I figured it wouldn’t hurt to explore how that same silhouette might work with her ice gown as well. Someday, theoretically, I would love to do a more literally iced-up version of her gown, but I figured the alternate colour way would be a nice middle ground to strike. You can see the other version above.”, Claire explains 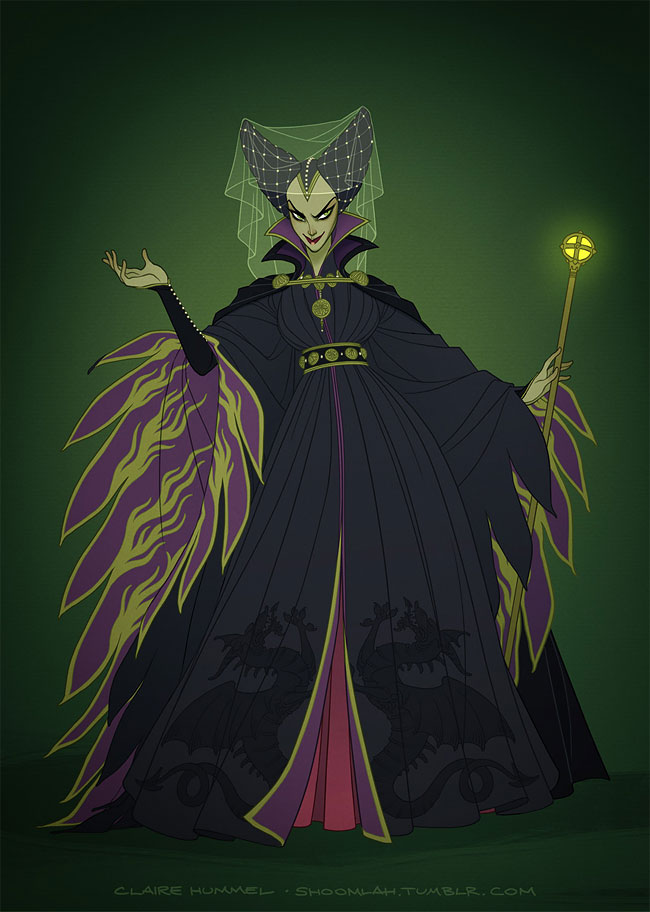 “God I love dagged sleeves. Almost as much as I love slashed ones. I just want to dag and slash everything I can get my hands on.

I’ve wanted Maleficent to be the first villain in the series for a while now, ever since I made the mental leap between Maleficent’s horns and 15th century horned hennins. The time period works out pretty well, actually, since I wanted her to look a little more dated than Aurora’s 1480’s getup- both houppelandes and horned hennins were all the rage during the early- to mid-1400’s, and they make for pretty good analogues to her official costuming. Sexy stuff.

This proves more than any of the previous pieces that these are adaptations, not improvements. I mean, look at the original Maleficent design- how does one improve on PERFECTION” 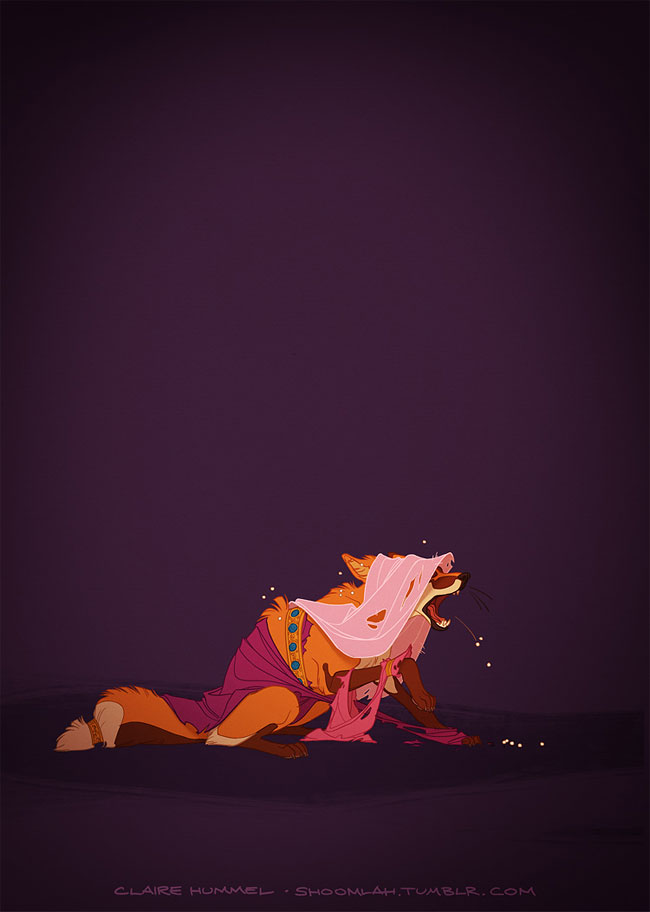 “Yup, this was an April Fool’s joke, just to answer all the inquiries. :)

A lot of people have been asking about Maid Marian, so I figured I might as well give her a shot- a bit tougher when you’re looking at clothing on anthropomorphic animals, of course, but there are still a couple of details that point to the 15th century- the cut of the dress, the ears disguised as a horned hennin headdress, the bag sleeves, etc. I still tried to maintain the relatively simple silhouette of Marian’s dress, just with added period details- making it more of a houppelande by design, and resolving the v-shaped neckline to show the kirtle underneath.

Also really wanted to hide some foxglove motifs in the lining of the gown- it’s subtle, but I think it really ties the whole design together.” 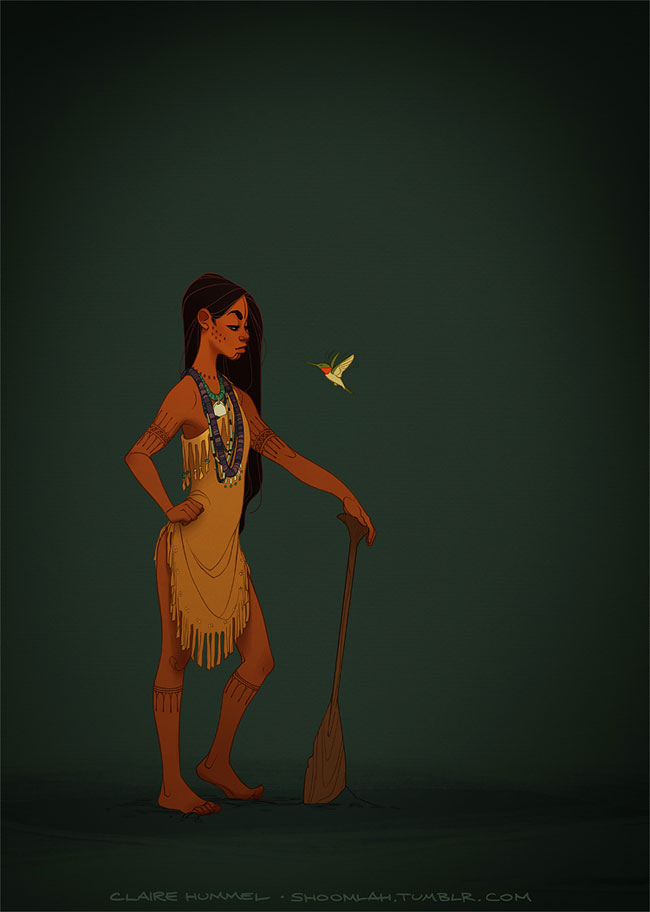 “Finally updated Pocahontas! I don’t think this is what people were expecting as the next entry in the series, but some of the criticisms of my first design have been eating away at me for years now and I needed to get off my ass and address them.

So hey! Spunky age-appropriate Pocahontas/Matoaka, sans feathers in the hair/European imagery/other superfluous details. This is closer to accounts and illustrations of Powhatan dress from the period, and I kinda think it’s closer to the Disney design anyway. WIN/WIN.

Thanks to everyone who’s educated my ass over the past couple of years, including moniquill, apihtawikosisan, this-is-not-native, and numerous others. You’ve made me a way more thoughtful artist in the process. :)” 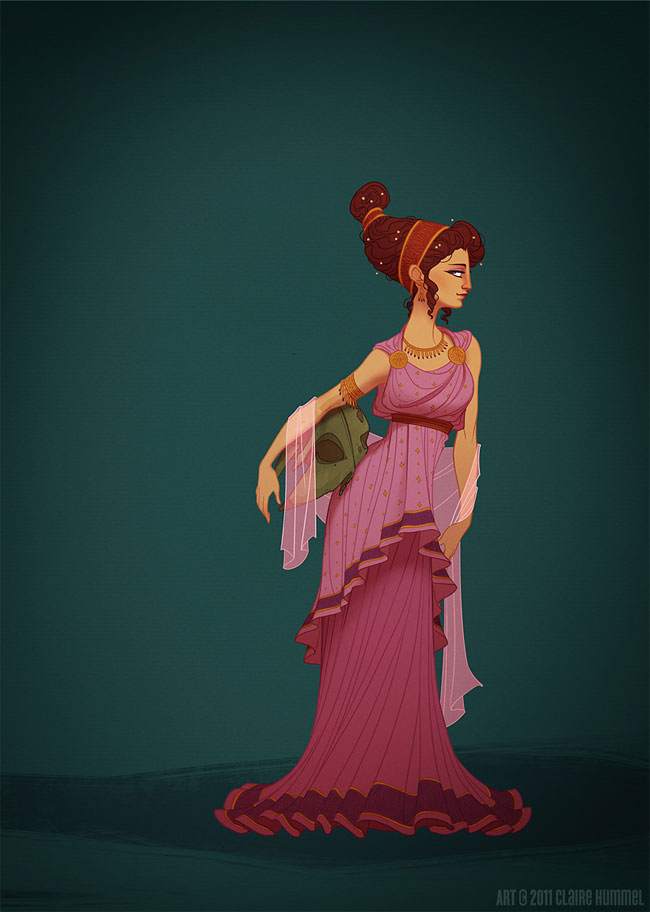 “Finally moving on to the unofficial Disney ladies with Megara! So fantastically simple to research, just put her in a simple doric chiton and spent most of my time researching fabric colours and patterns to see what I could get away with. It kinda looks like she killed Hercules and took his helmet? I’m okay with that.” 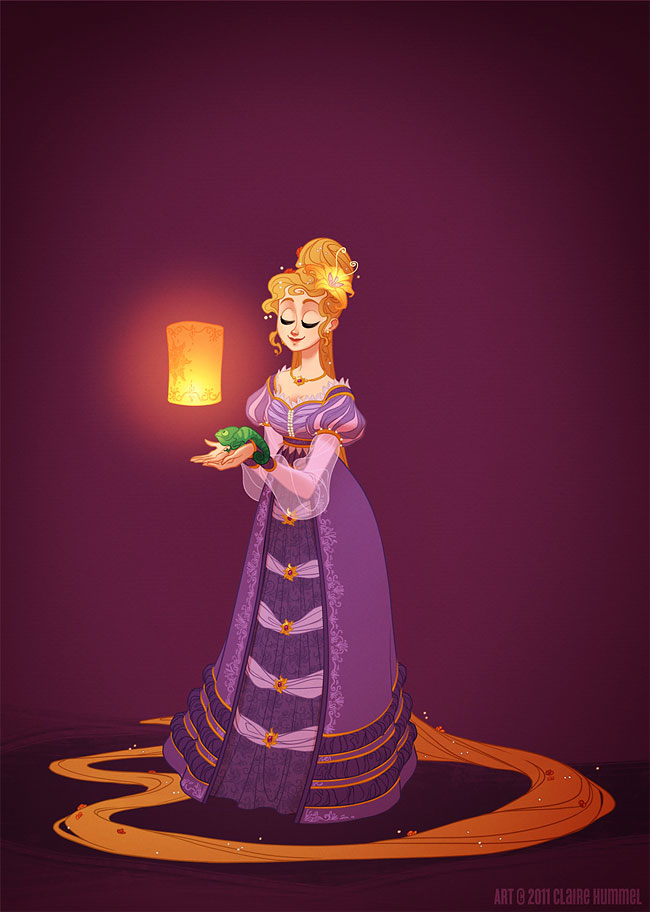 I adore Tangled for many reasons, but historical accuracy isn’t one of them. It’s actually the first Disney film that feels entirely set in its own fantasy world, with no real ties to any particular time period or setting- unless you count that ever-forgiving time period of “Ren Faire.”

Since this is the last one in the series (so far as official princesses go), I thought I’d treat myself and just have fun with it. I drew up concepts for both the 16th century (the slashed sleeves) and 18th (Keane’s initial inspiration), but in the interest of choosing a time period I hadn’t touched yet I ended up going with the late Regency. There are a ton of gowns circa 1820 that have those inimitably princessy sleeves, and those palace guards aren’t fooling anyone.” 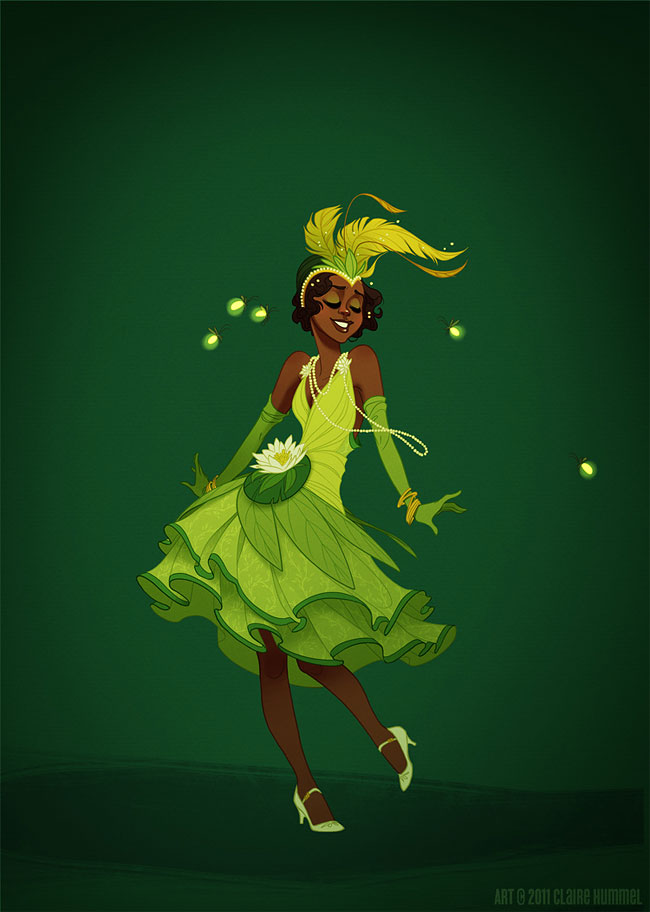 “I’ve been crazy excited to do Tiana- she’s not my favourite princess, but I started researching her dress in the very early stages of this project and got pretty hyped up about it.

Most of the dresses in Princess and the Frog do have some historical basis (lots of dropped waists and slinky chemises), so I thought it would be fun to tackle Tiana’s magic-kiss-swamp-frog-something gown during the climax of the film. It’s the one dress that’s clearly meant to just be a standalone “princess” dress, but I liked the idea of a challenge and decided to drag it kicking and screaming back into the 20’s.

I based the dress on Lanvin’s robes de style, which were- unlike the flapper dresses most people associate with the Jazz Age- fitted in the bodice with a wide, panniered skirt. The robe de style was considered a relatively conservative dress choice so you probably wouldn’t have seen a hem hiked up this high, but COME ON HOW OFTEN DO I GET TO DRAW THEIR LEGS. Not often enough, I’ll tell you that.” 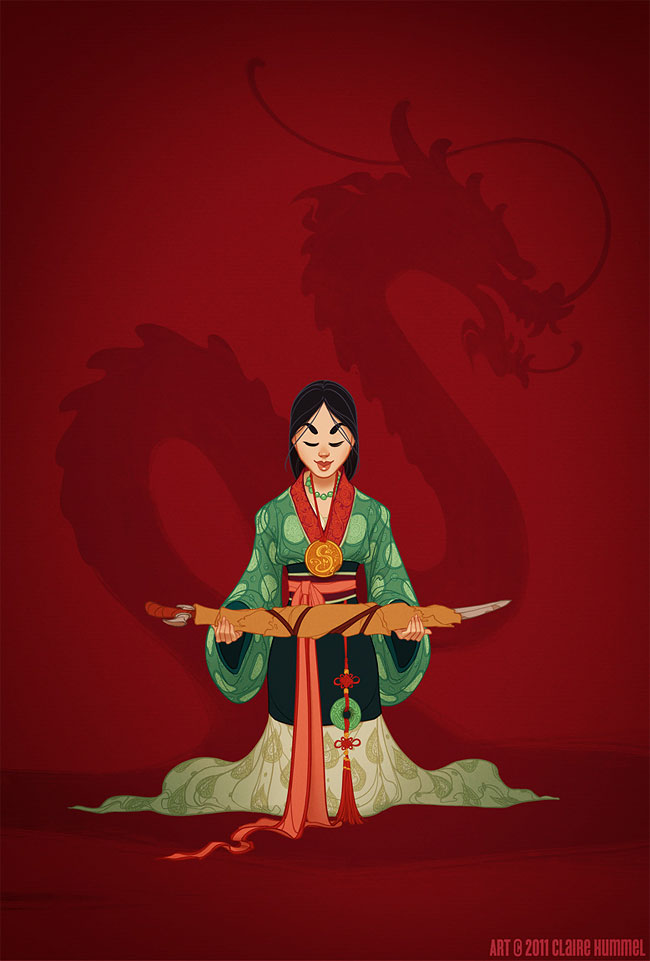 “Sooooo Mulan. It’s not that I didn’t want to do Mulan (she’s fantastic so far as the Disney “princesses” go), but pinning down her time period stopped being fun and rapidly became a headache- you have the original legend taking place in the Wei Dynasty, the Huns as an actual threat during the Western Han Dynasty, the Forbidden City of the Ming Dynasty, the hanfu fashion setting it earlier AGHGHGhjffjhfghgjhkh

On that note, I’ll be the first to admit that this piece isn’t tying Mulan down to a particular period, rather putting her in plausible historical textiles and hanfu. When I was asking around for references most of the stuff sent my way were from Chinese period films or other modern recreations, so I just threw up my hands and decided to have fun with it.

It’s based on Mulan’s finale/epilogue costume at the end of the film; she never seemed at home in either the matchmaker costume or the armor, so this seemed like the best “Mulan has come into her own” middle ground.” 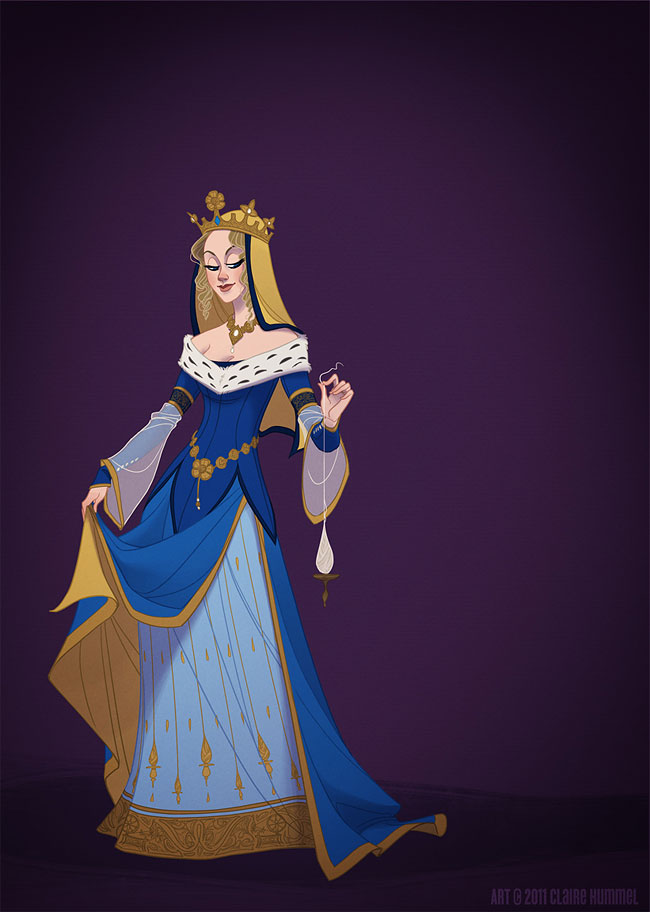 “…Aaaaand moving on. So Prince Philip does specifically and emphatically say “this is the 14th century!” at some point during the film, but Philip’s an idiot (a handsome, handsome idiot) and I, never afraid to ignore source material, ignored him.

Oddly enough Philip’s clothing is a better point of reference than Aurora’s (since the hourglass, off-the-shoulder cut of her dress is straight out of the 1950’s), and there are far more examples of his get-up from the 1460’s onward than in the 14th century. I went with my gut and ended up with something around 1485- a little later than one might expect, but it’s such a (beautifully) stylized film that all bets are off.” 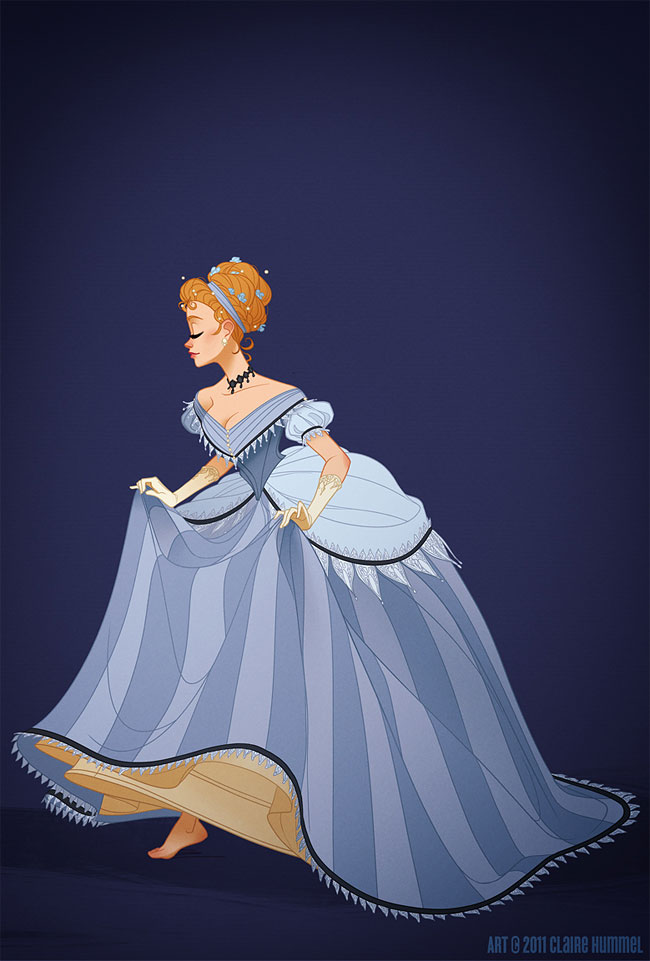 “I went with the mid 1860’s for Cinderella’s dress, the transitory period where the cage crinoline takes on a more elliptical shape and moves towards the back. Not that it accounts for Lady Tremaine’s sweet 1890’s getup, but it’s also not unheard of to see it worn alongside Anastasia and Drizella’s early bustle dresses. It’s also worth noting that it was made by a fairy godmother, so it make sense that her tastes would be a little behind the times.

Not to mention background characters, who seem pretty firmly planted in the middle of the century.

I couldn’t settle on a visual motif for the details in this one- shoes, pumpkins, mice- so I just gave her some stripes and gothic lace to make up for it. OH ALSO I drew her losing her right shoe instead of her left and only recently realized it. Whoops.” 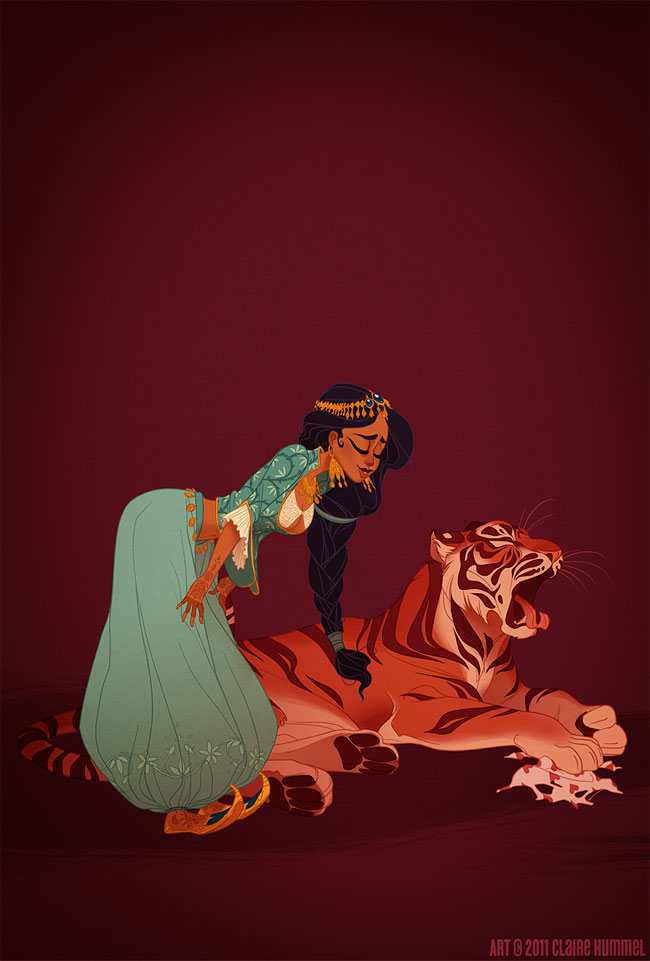 “EDITORIAL NOTE: as much I love this piece for it’s own merits, I’d also like to point out that I drew this three years ago and no longer consider it to be a valid attempt at a historical Jasmine! I have plans to redo it one way or the other, just stepping in to make that clear for the time being.

Considering said inaccuracies, please do not share this piece when sharing the historical princesses! You’re welcome to share it for the purposes of commentary and critique, but I don’t consider it a valid entry in the series anymore.

Okay, these are getting more and more complicated, but this one was fun.

Let’s be frank- Aladdin is hardly an exercise in historical accuracy. Combine that with Claire knowing veeeery little about historical* Middle Eastern clothing before starting on Jasmine, and you’ve got yourself a few days of research before digging into this thing.

It took some effort to track down some midriff-baring outfits but BY GEORGE I DID, thank you Persian fashion plates. I now know what sirwal are called (besides Hammer pants), and that Persian women wore some pretty sweet little jackets that I wish I owned.” 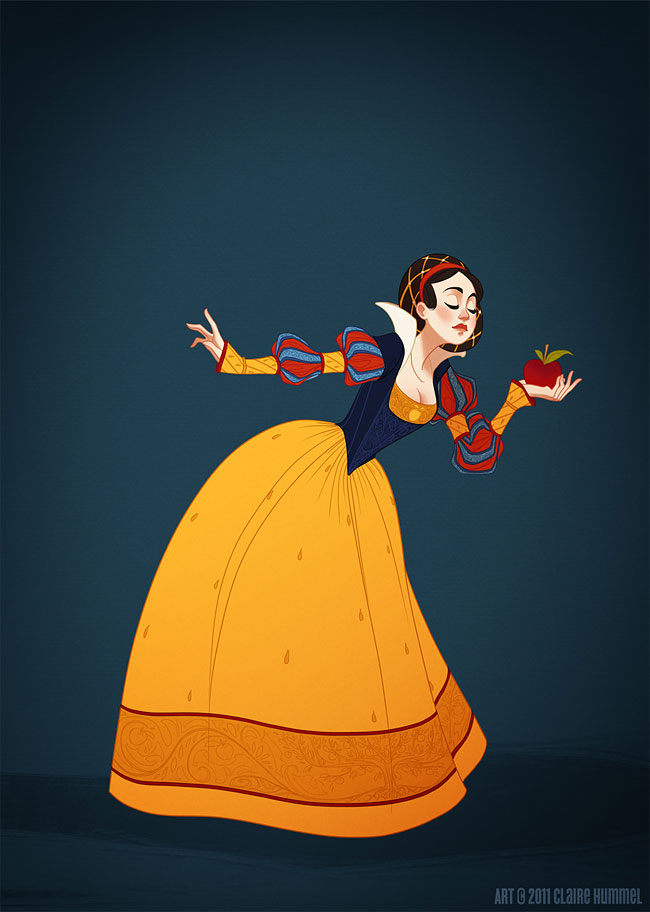 “Honestly? I just wanted to draw those damn slashed sleeves. I want them SO BAD.

Unlike the aforementioned Little Mermaid, Snow White’s time period is pretty easy to pinpoint in 16th century Germany. Not that the film is accurate, but the clues are there- I took a wide swath from about 1500-1530 to come up with something that still maintained the spirit of the original design.” 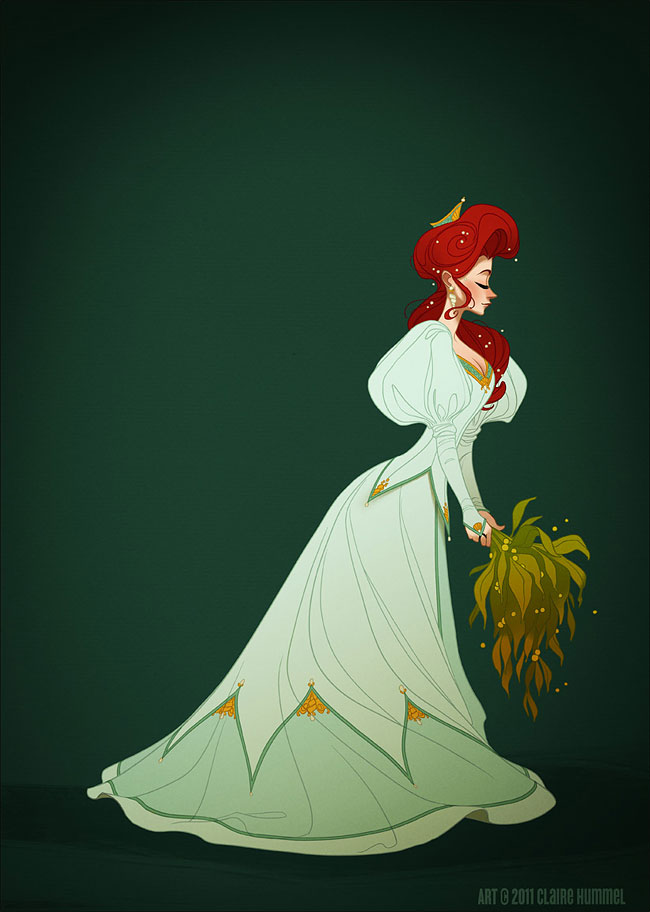 “Continuing my historically accurate Disney princesses! It makes me happy.

The Little Mermaid is hard to place from a time period standpoint- Grimsby’s wearing a Georgian getup, Ariel’s pink dress with the slashed sleeves subscribes to several eras from the Renaissance to the 1840’s, Eric is… Eric.

I went with Ariel’s wedding dress as a starting point since those gigantic leg-o-mutton sleeves (so embarrassingly popular in eighties wedding fashion) were a great starting point for an 1890’s evening gown. It’s also not unfeasible that Eric’s cropped tailcoat could be from the same era, so I’m sticking with my choice. PLUS Ariel with Gibson girl hair? COME ON IT IS AWESOME.

I’m still not sure if I’d try to squeeze her pink dress in the same time period or if I’d just throw up my hands and draw it with a hoop skirt, but we’ll see.” 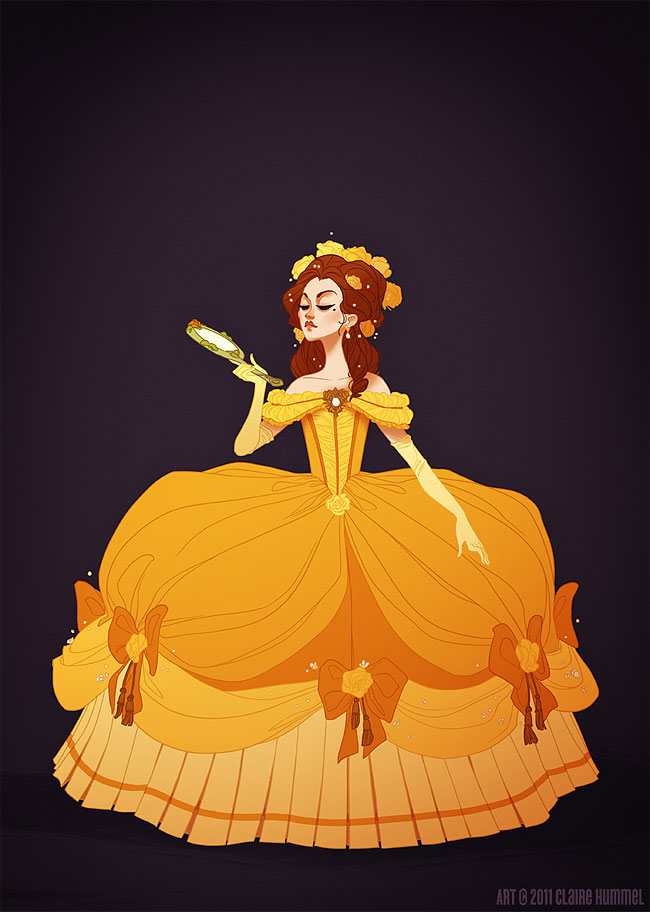 “I can’t explain it, but reinterpreting Disney princess outfits through a more historically accurate lens really, really appeals to me. Beauty and the Beast has always hovered hesitantly in the late 18th century (especially in the earlier concept art), so I redid Belle’s gold dress to match 1770’s French court fashion.

– Claire, who knows above-the-elbow gloves weren’t really in fashion until the early 1800’s but is running with it anyway.”