After Their Wedding, This Couple Did What Many Of Us Have Always Dreamed Of Doing – Design You Trust
≡
d
Photo
Architecture
Inspirations
Design
Tech
Animals
Travel
Hosting
Facebook
Travel

After Their Wedding, This Couple Did What Many Of Us Have Always Dreamed Of Doing 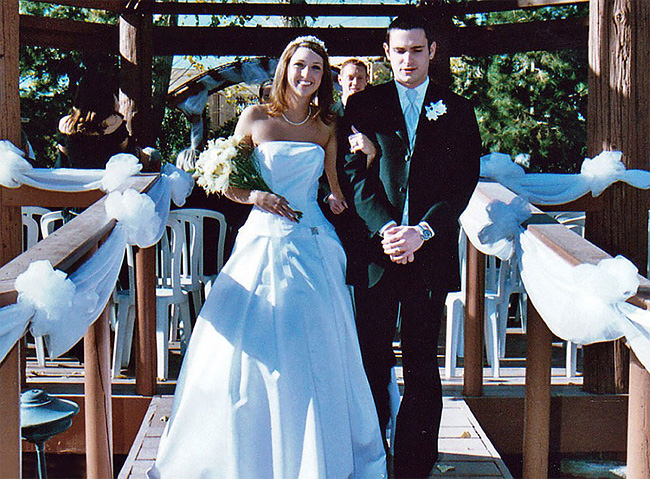 When Matt and Jessica Johnson got married, they did something that none of their friends and family had ever expected them to do: they sold their house, gave up their successful careers as a manager and financial specialist, and bought a small yacht. For almost four years now, they’ve been sailing around the world in the company of their cat, George. 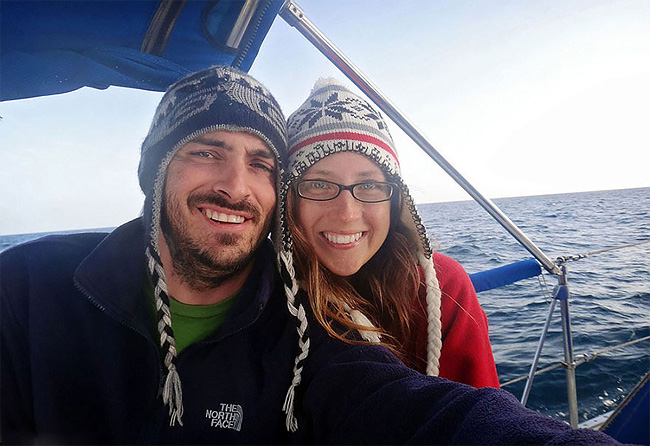 Living off around $1,000 a month, they’ve already visited 16 countries, including the Bahamas, Jamaica, Cuba and Peru — and they have no intention of stopping any time soon. This brave couple’s story is truly inspiring. 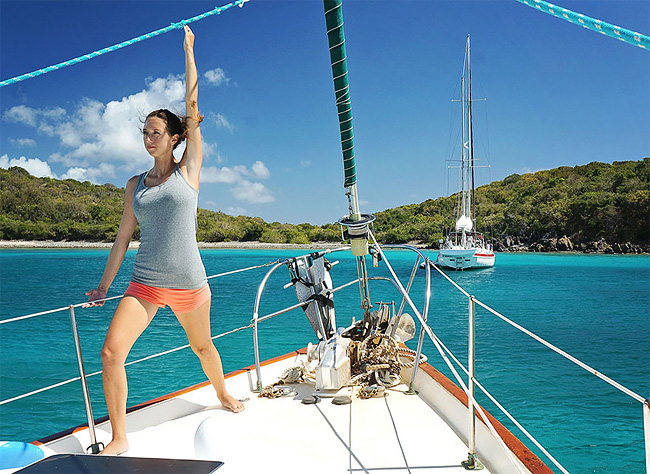 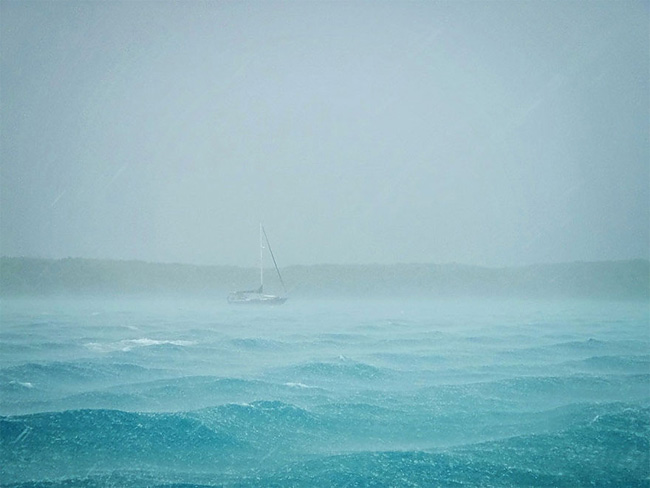 ’It all started in 2007′, recalls Jessica. ’We were taking a break on Lake Michigan, and I noticed that Matt was inspecting the boats there very intently.’ 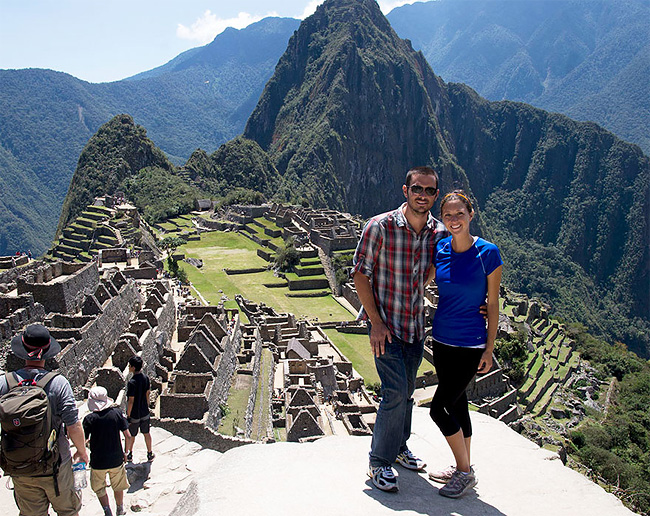 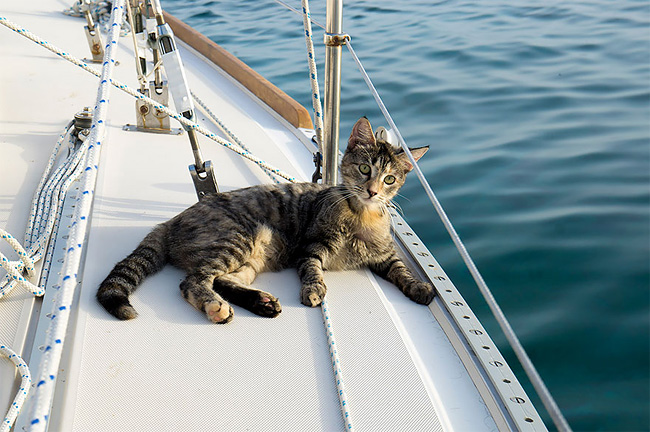 ’Then he looked at me and said: “So Jess, we can either buy a house or spend all our savings on a boat. What do you think, which one’s a better idea?” That’s how we decided that we wanted to spend summer on the water.’ 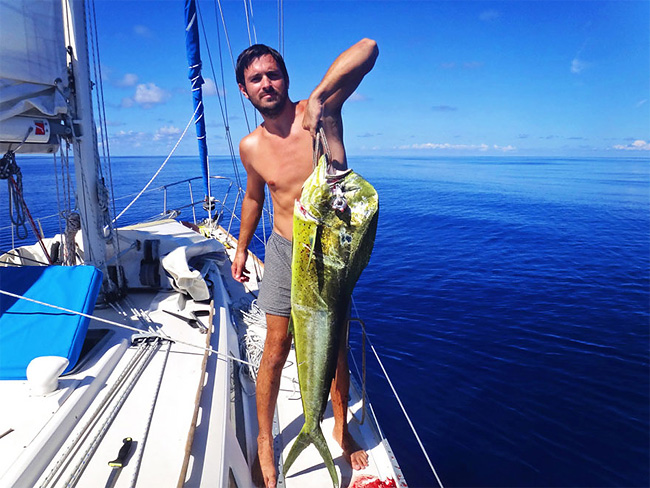 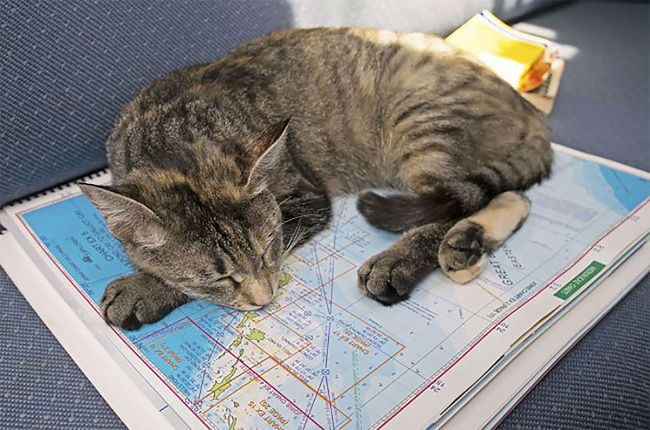 ’In June 2011, we sold our house. It was then that we realised that we wanted to go on the kind of journey which would change our lives. How long it would last — 5, 6 years, maybe more — didn’t really matter.’ 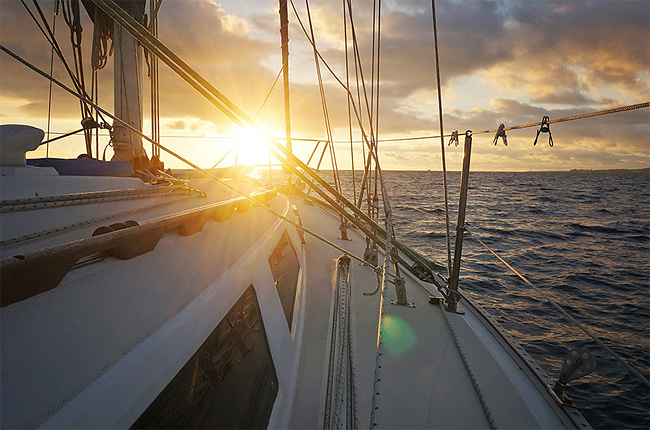 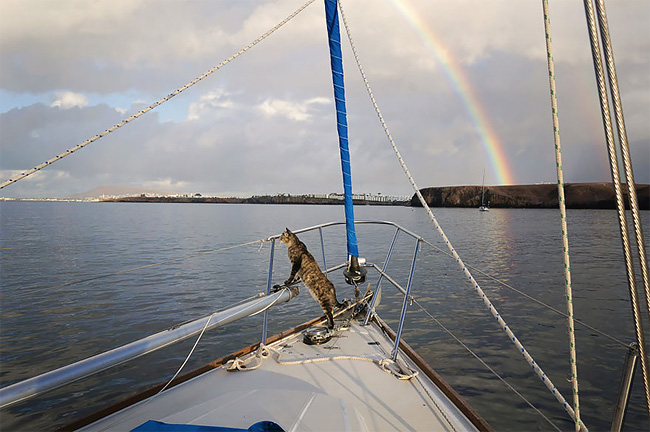 ’We picked up George in 2012. It’s great that he’s now a member of our team. During storms he always manages to stand on his feet better than we ever do.’ 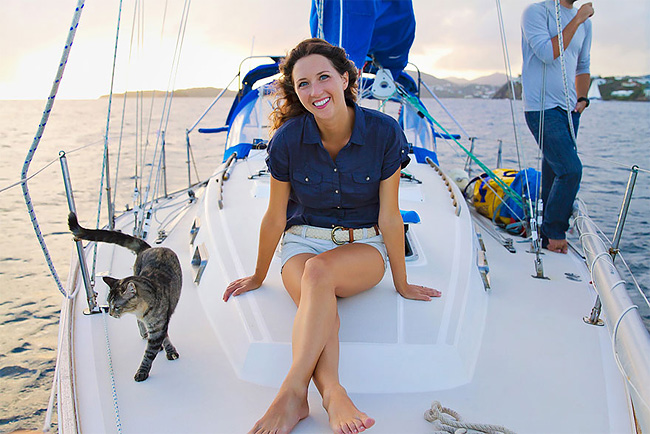 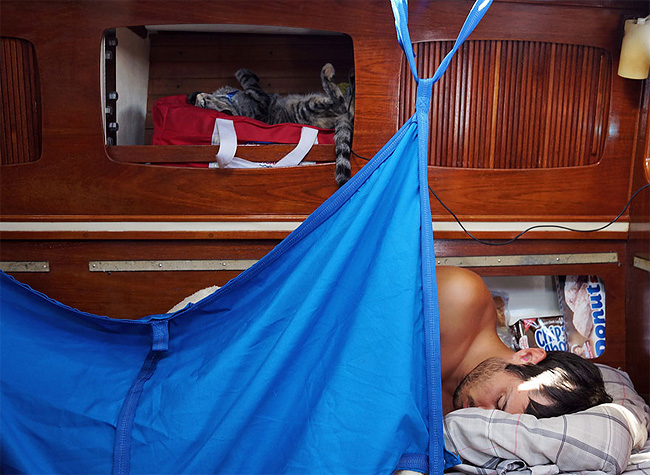 ’Travelling like this has really strengthened our relationship. You don’t have any time when you’re on a boat to argue with each other — here we’re part of one team.’ 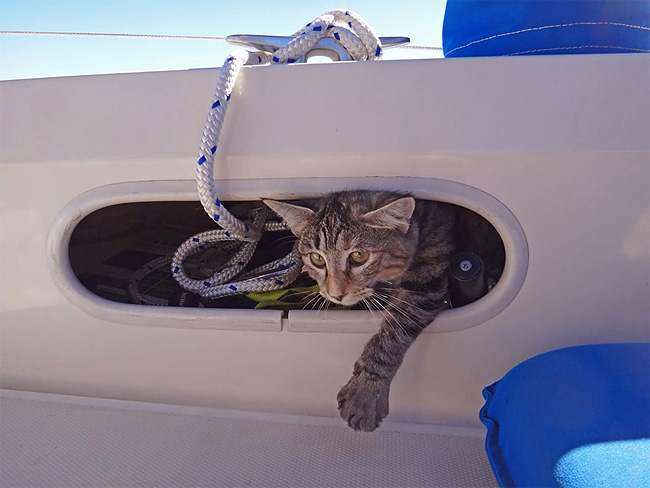 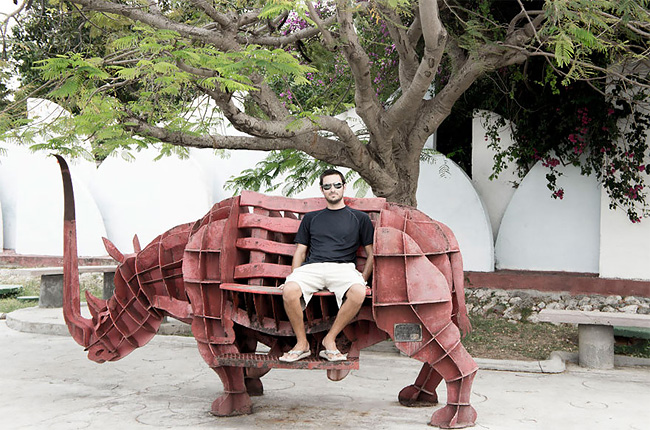 ’Before, our lives were almost like a stereotype of the American dream — we both went to school and then university, got married, bought a house, and started successful careers.’ 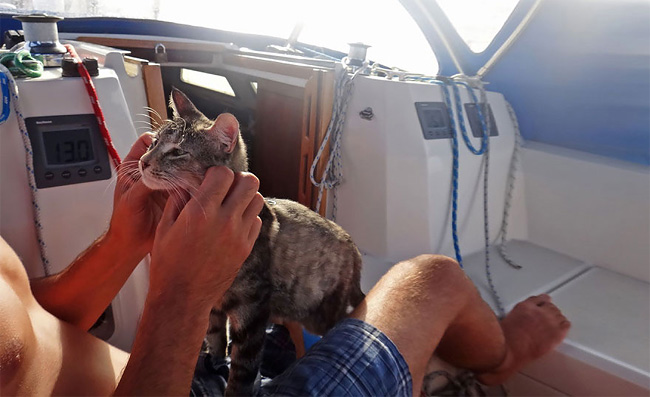 ’But then we realised that we were wasting so much time just watching TV, doing nothing worthwhile; if we carried on like this we’d never have any real, memorable experiences to look back on when we got old. We wanted to change this — and we did.’ 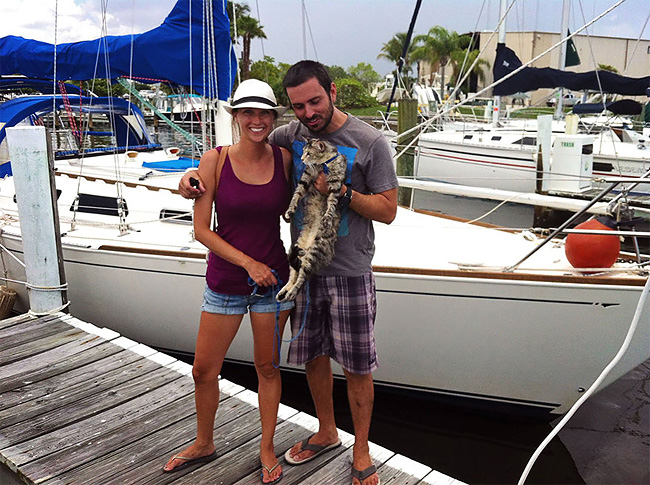 Real Boeing 727 Airplane Converted In Authentic Hotel In Costa Rica
Guy Finds Abandoned Graveyard Of Supercars In UAE
Woman Discovers Penis-Shaped Island on Google Earth
Beautiful New Zealand: Earth’s Mythical Islands
At the Edge of the World: A Look at Life in Greenland
Watch a Plane Take Off from This Runway in the French Alps
The Most Amazing Wedding Dress You'll Ever See
There's an Atmospheric Abandoned Jurassic Park Located in the Heart of Russia
This Camper Does Triple Duty as an Office, Lounge and Bedroom
Unhappily Ever After: Artist Creates Unhappy Endings To Cartoon Characters
Aerosutra: How People Survive On Long-Haul Flights While Trying To Sleep
Yao Ethnic Women Keep Long Hair Tradition Alive
Shark Island in Central Indonesia
Classic Gardens in Suzhou
Photographer Ask Strangers To Reveal Their Deepest Regrets In Life
Stunning Photographs Of A Glacier In The Karakoram Region Of Pakistan
Mesmerizing Before And After Photos Of Drag Transformations
Models Become Their Favorite Foods In Photographic Series
Boxers Before And After The Fight: Beautiful Photography Project By Nicolai Howalt
An 80-Foot Steel Kraken Will Create An Artificial Coral Reef Near The British Virgin Islands
Lad Drops Everything To Travel The World, Assures Mother He's Safe With 'Mom, I'm Fine' Sign
Gods Of Egypt Movie Before And After Special Effects
Refuge Galindia: The Polish Slavic Pagan Resort That You Have To Visit
A Real-Life Yellow Submarine for Rent
after, always, couple, dreamed, their, wedding

A Used Cargo Van Becomes A Mobile Studio
Which Type Of Traveler Are You?
Rare Snowfall On The Acropolis In Athens, Greece
Newly Married Couple Are Photobombed By A Raging Bull As They Pose For Their Wedding Photos
This Couple Converts The Real Cold War Nuclear Missile Base Into The Luxury Airbnb
Incredible Portraits Of Maori Women With Their Tradition Chin Tattoos From The Early 20th Century
Game of Thrones Fan Wedding
This Clock Says It’s Always Time For Moss
Father And Son Convert Old School Bus Into Mobile Tiny Home For Cross-Country Road Trip
Mass Wedding in Indonesia
Source of inspiration since 2007. Proudly hosted by WebHostingBuzz.
Privacy Policy · Terms of Service · Content Removal Policy 🇺🇦 ❤️