There Has Been A Dead Cockroach In The Anthropology Building’s Stairwell For At Least Two Weeks. Some Enterprising Person Has Now Made Her A Little Shrine. – Design You Trust
≡
d
Photo
Architecture
Inspirations
Design
Tech
Animals
Travel
Hosting
Facebook
Animals

There Has Been A Dead Cockroach In The Anthropology Building’s Stairwell For At Least Two Weeks. Some Enterprising Person Has Now Made Her A Little Shrine. 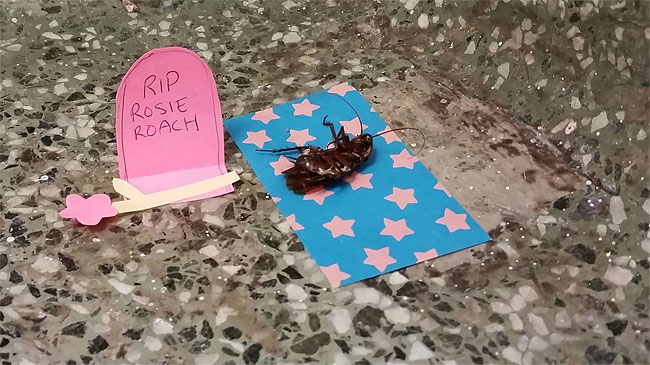 A professor at Texas A&M University posted these photos to Facebook.

“There has been a dead cockroach in the Anthropology building’s stairwell for at least two weeks.. Some enterprising person has now made her a little shrine.” 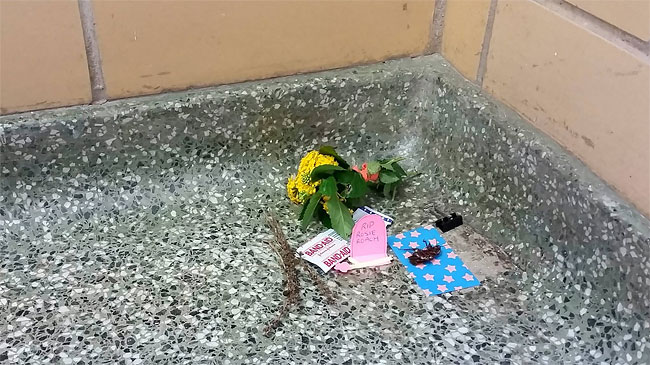 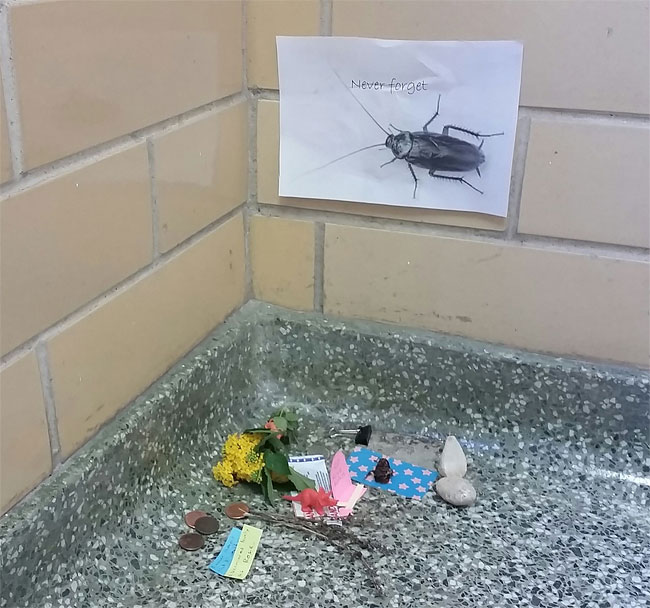 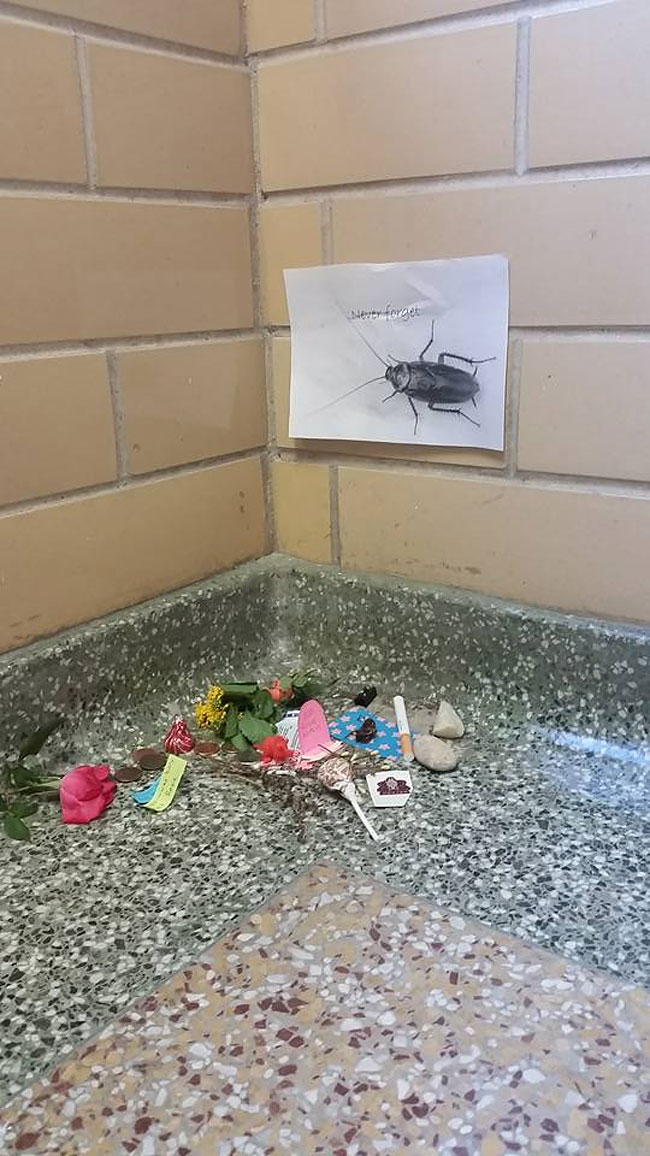 More tributes that afternoon. Some flowers and notes, coins, and a Band-Aid. 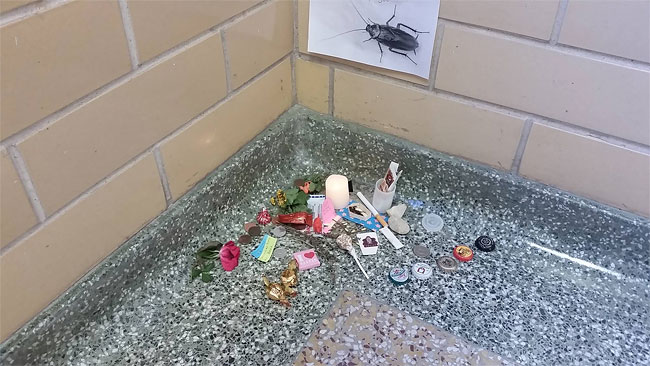 “There is a candle now and a little coffin for the carcass… And for the record, I had nothing to do with the genesis of this memorial.”

The tributes continue to flow. A lollipop, bottlecaps and a cigarette. 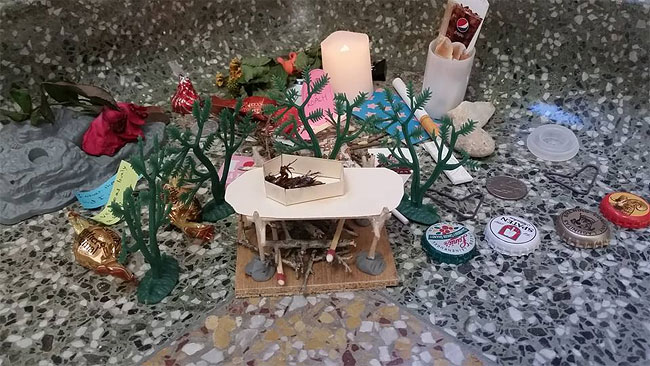 “Somebody built a funeral pyre.” 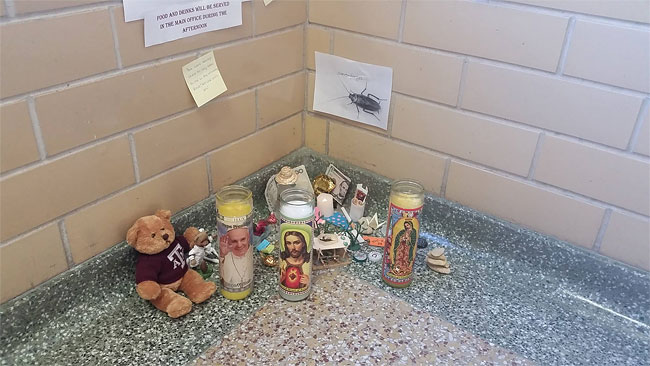 The Post-It on the wall reads,

“You were always there to say hello to me in the morning, Rosie! We will miss you.”

“Rosie the Roach will be with us until Tuesday, December 14th when a celebration of her life will be conducted. Food and drinks will be served in the main office during the afternoon.” 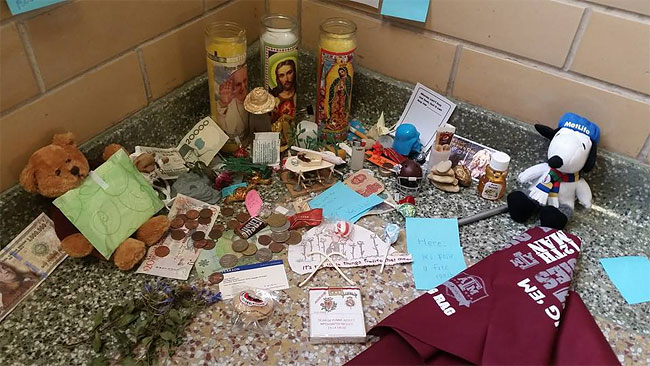 Rosie’s popularity grew, and she was allowed to lay in state for a while longer than originally anticipated.

A generous soul left a joint on the funeral pyre. Someone built a tiny cairn. Can’t identify the currencies of the paper monies left. 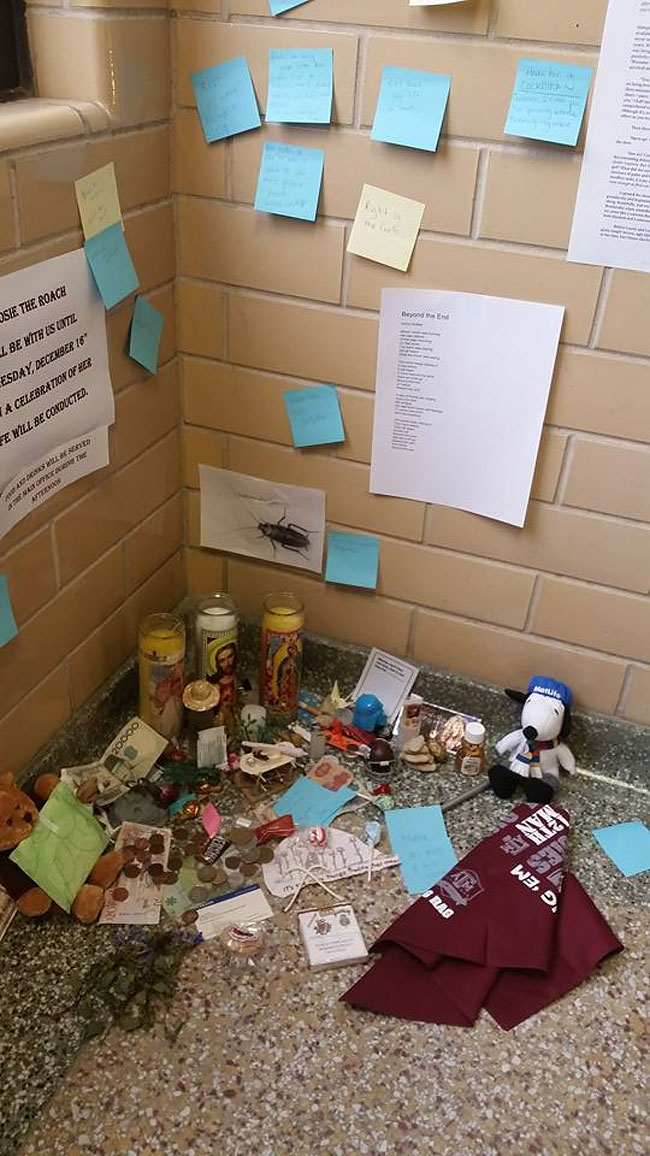 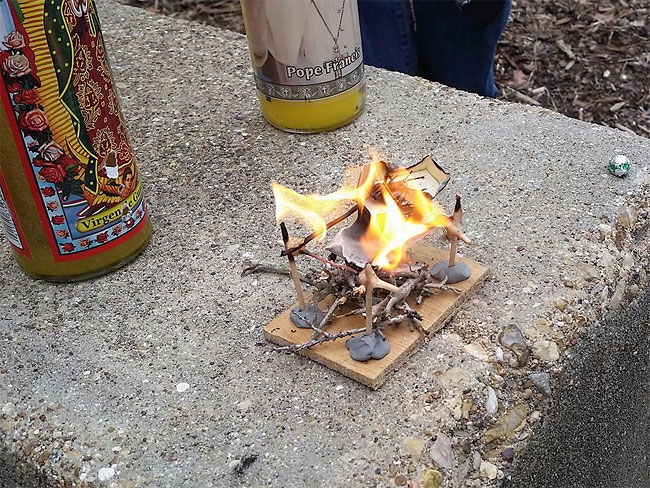 “They cremated the roach this afternoon…”

Rare Purple Crab Species Identified in Threatened Palawan Biodiversity
Cute Cat Culture Goes Too Far With Japan’s Freaky Cat-Theme Masks
The Frog and Snake
Artist From Poland Creates Gorgeous Wild Animals Designed In 3D
Two-Legged Rescue Puppy Gets 3D Printed Wheelchair To Walk
Hilarious Comics Reveal The Dark Side Of Animals
Photographer Captured His Border Collie Playing In The Water
Photographer Alicia Rius Captures The Beauty Of Bald Cats
Their First Steps
How To Be A Cat For Dummies
Goats Take Over Empty Streets Of Seaside Town In Wales During The Coronavirus Outbrake
Striking Animal Pictures Selected As Finalists Of 2017 Comedy Pet Photography Awards
Couple Create Rocker Denim Jackets for Dogs (and Cats!)
Rare Blue Whale Skeleton Unveiled At UK’s Natural History Museum
Brazilian Artist Creates Beds For Animals From The Old Tires That He Finds In The Streets
When Dize Does Matter – Bestiarum Vocabulum: Last Of The Earth's Giants
Orphaned Baby Owls Get New Home
Homeless Dog Found In Garbage Becomes A Lion He Deserves To Be
What Life Is Like Before And After You Get A Dog
"Make Your Pet's Chew Toy Great Again": Trump Dog Chew Toy Is Getting Popular
The Copycats: Cats Imitating Famous Works Of Art
Swarm Of 20,000 Bees Grounds U.S. Air Force’s F-22 Raptor In Virginia
This Twitter Account Posts ‘Poorly Drawn Animals’ And Here Are The Funniest Ones
Longcroft - Luxury Cat Hotel
anthropology, building, cockroach, least, stairwell, there

Using a Strip of Paper To Give Birds Funny Eyes Is Ingenious
Cats Can Finally Destroy Priceless Artwork With These Masterpiece Scratching Posts
Fish Tornado
What The Bloody Hell Is A … ?: Brilliant Guide To Animals
Funny Animal Pics That Just Don’t Make Any Sense, As Shared On This Instagram Account
Horse in the House - German Woman Lets Horse Live in Her House Following Hurricane Xaver
Rescued Deer Becomes A Local Celebrity In Norway
Adorable Baby Koala Poses for Her Very First Photoshoot
Miniature Cage-like Balconies Attached to a Building
A Guy Found A Scared Kitten Under A Truck And Just Couldn’t Say No To Her
2007 ‒ 2022 by Design You Trust. Proudly hosted by WebHostingBuzz.
Privacy Policy · Terms of Service · Content Removal Policy ❤️ 🇺🇦