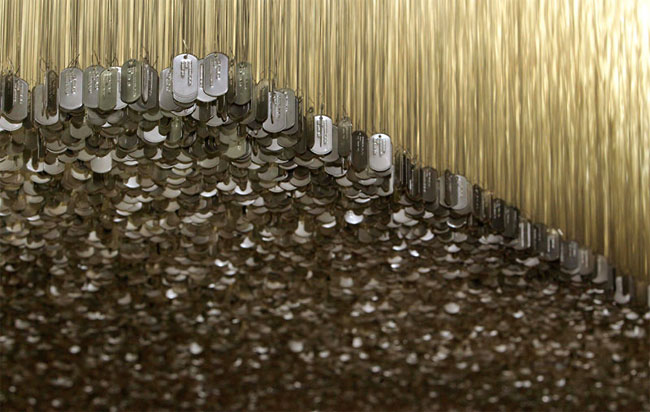 At the Harold Washington Library in Chicago is a new art installation called “Above and Beyond” featuring over 58,000 replica dog tags — one for each American soldier killed in the Vietnam War. The dog tags, each hung one inch apart, are suspended from the ceiling from a 410-square-foot rectangle. Each dog tag lists the soldier’s name, military branch and date of death. Nearby is a touch panel display that allows visitors to look up a veteran’s name and find generally where the soldier’s dog tag is hanging. It is the only memorial other than The Wall in Washington, D.C., that lists every individual killed in Vietnam. 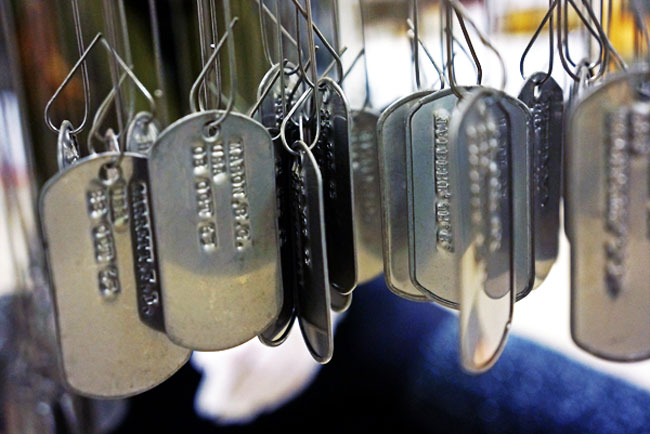 “The search for a spot for “Above and Beyond” was complicated by the size and weight of the piece, not to mention it is viewed best in natural light so the sun can play off the tags,” wrote Annie Sweeney on Chicago Tribune. “Viewing it from all sides also enhances the experience.” 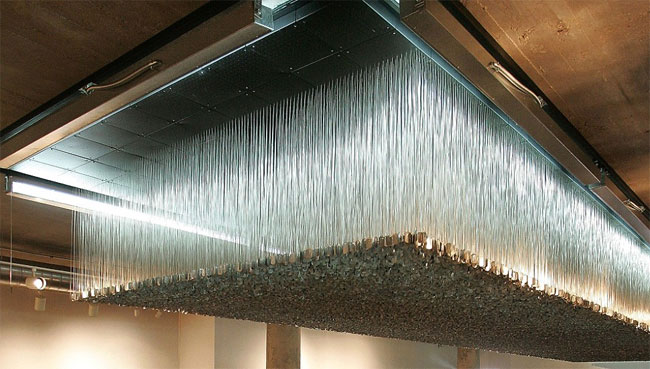 Above and Beyond was created by artists Ned Broderick, Rick Steinbock, Joe Fornelli, and Mike Helbing, back in 2001 and originally hung at the National Veterans Art Museum, in Chicago. 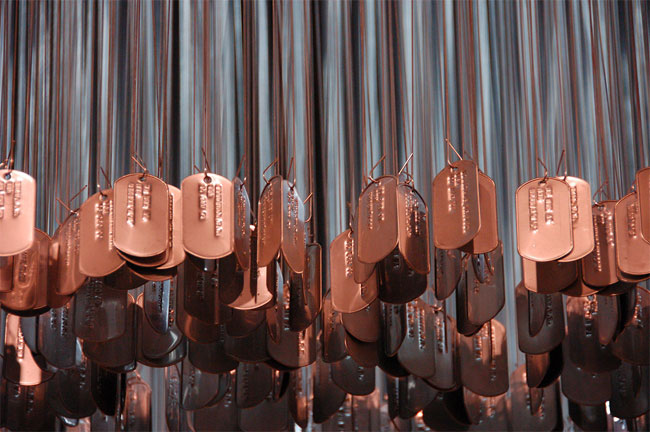 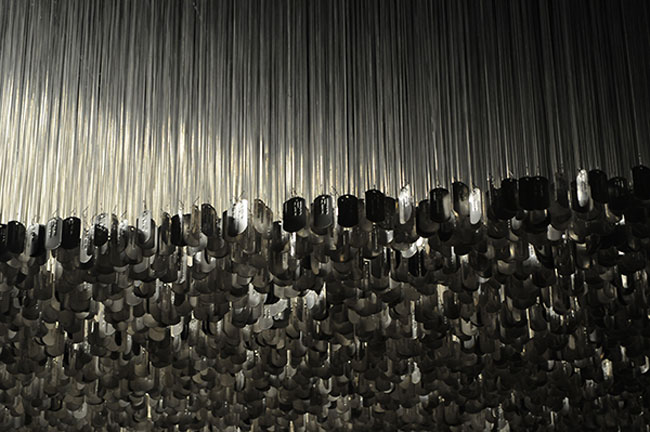 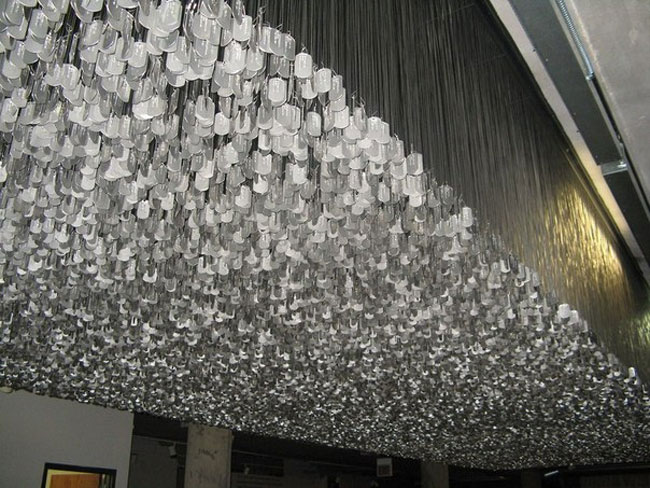 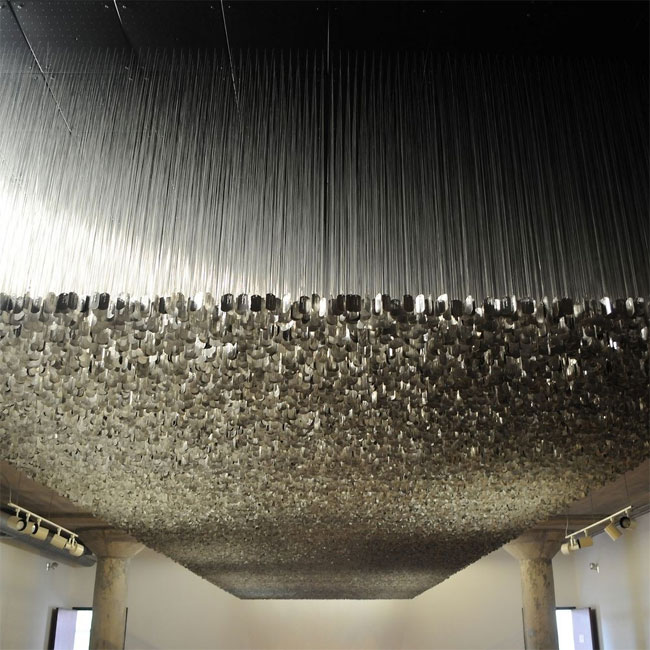 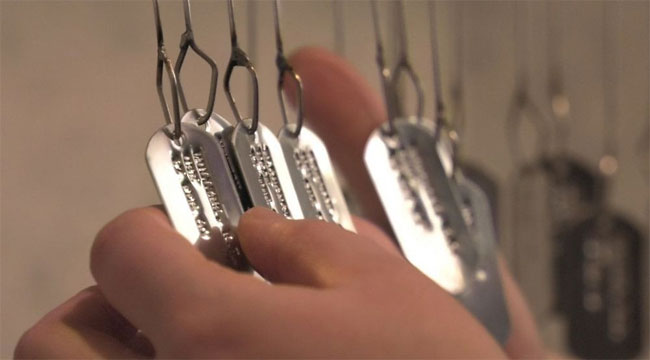 700 Metres Of Wool Went Into Making This Epic Cross Stitch Mural
Museums Are Hilariously Battling Over Who Has The Best Butt Exhibit
Nordstrom Is Selling Jeans Caked In Fake Dirt For Hundreds Of Dollars
Artist Beth Cavener Creates Terrible Animal Sculptures You'll Never Forget
What Would U.S. Money Look Like, Given The Proper Attention Of An Industrial Designer?
A Girl Collects Porcupine's Shed Quills And Makes Different Things Out Of Them
Dazzling Three-Dimensional Paper Sculptures Of Birds, Bees, and Crustaceans by Lisa Lloyd
Toys In The Basement: Beautiful Creepy Dolls By Annie Montgomerie
See How This Illuminated Portrait Of Nikola Tesla Was Made
Creative DIY Ideas To Hide The Wires In The Wall Room
This Is A Private Pool With Van Gogh Starry Night Mosaic
Anonymous Artist ‘Wanksy’ Draws Penises On UK Potholes To Make Government Fix Them
This Chair Allows Its User To Wrap Up And Get Comfortable
"Reading The Road": River Of 11,000 Glowing Books Flows Down City Street
Sculpted Meals So Beautiful That You'll Starve Rather Than Disturb Them
50 Times People Spotted Stupid Design Decisions In Public Places And Just Had To Share
The Innovative Minimalist Earrings By The Designer Otis Jaxon
Stirring The Swarm: A Horde Of 10,000 Ceramic Beetles Crawl Across Gallery Walls
This Teacher Wears Anatomical Bodysuit To Class
In Akureyri, Iceland, Heart-Shaped Stoplights Are a Daily Reminder to Smile
1960s Space Age Toy Rocket Shoes Simulate Walking On The Moon
Artist Liz Sexton Turns Little Animals Into Human Scale
Wearable Macramé Sculptures By Sandra De Groot Serve As Soft Headpieces And Armor
‘Stranger Things’-Themed Candies Come In Packaging Designs Fans Will Adore
chicago, memorial, veterans, vietnam