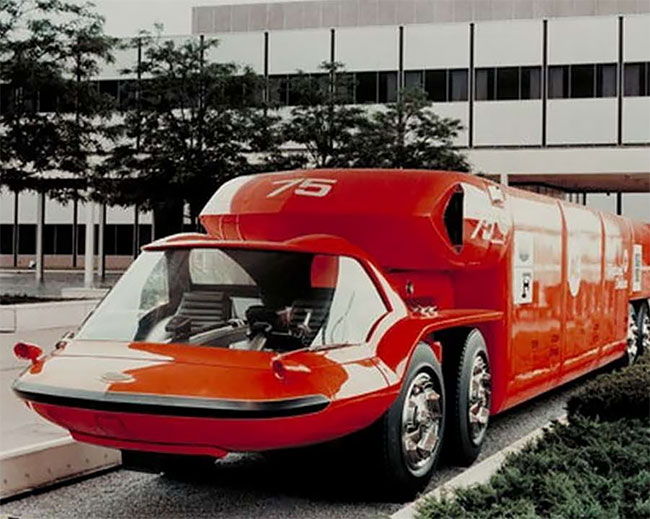 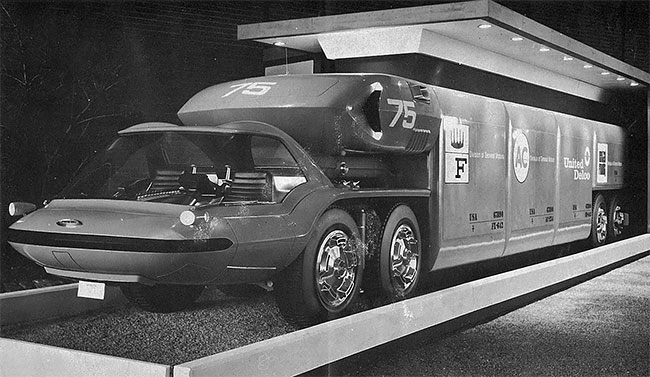 Featuring a tilt-forward canopy, four-wheel steering and a GT-309 turbine power plant that sat above and behind the cockpit, this aerodynamic design was meant to haul a new one-size-fits-all mobile container. This was four years before a world-wide standard for shipping containers was adopted. 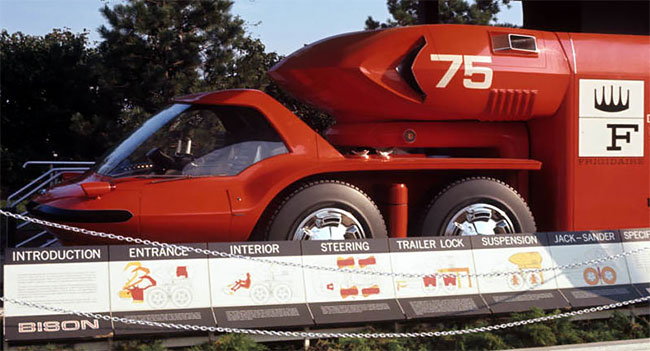 While the design, which looks like it came from famed designer Syd Mead, was space-age awesome, there was no additional development of this concept. We don’t know where this model ended up or if it was even a rolling test model. It remains a mystery and a sad one at that. 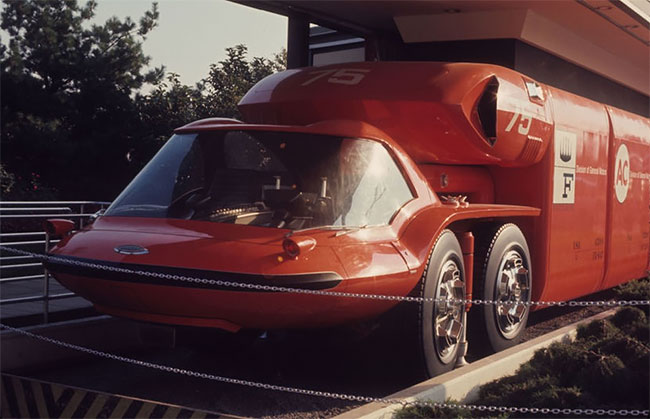 Could you imagine driving something like this? Sure, it would be terribly dangerous in a crash and that massive glass canopy looks like it would bake in the sun, but that’s what makes it so desirable – its styling. If anybody out there knows what happened to this concept or has any details about its brief life, please let us know! 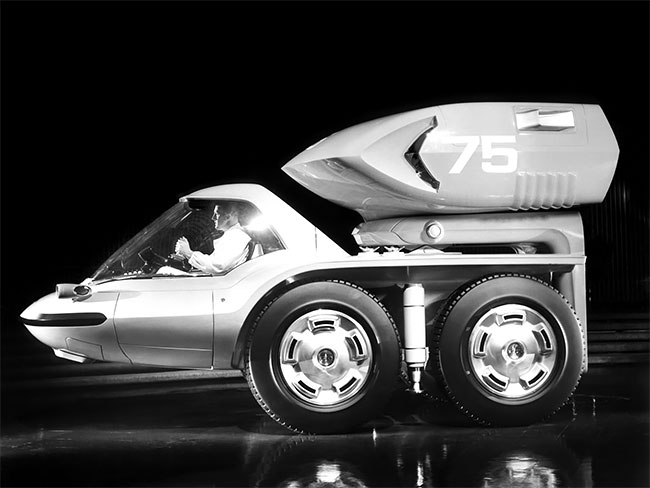 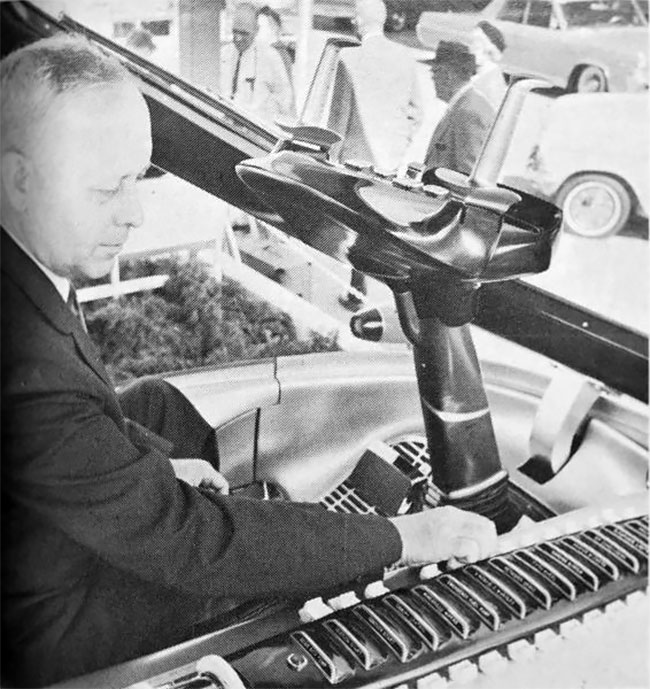 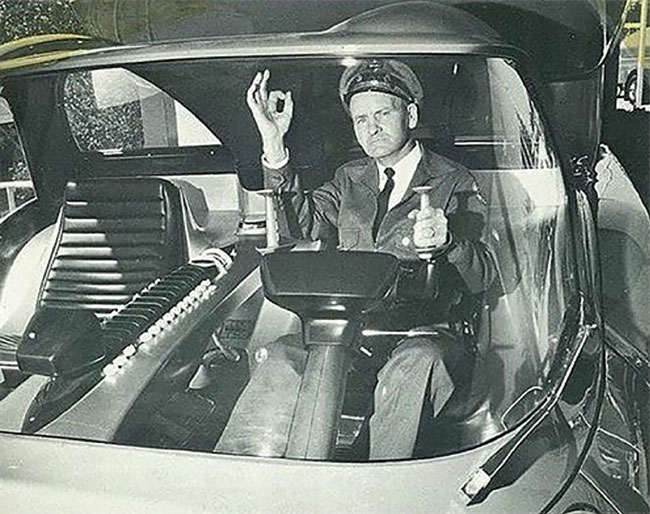 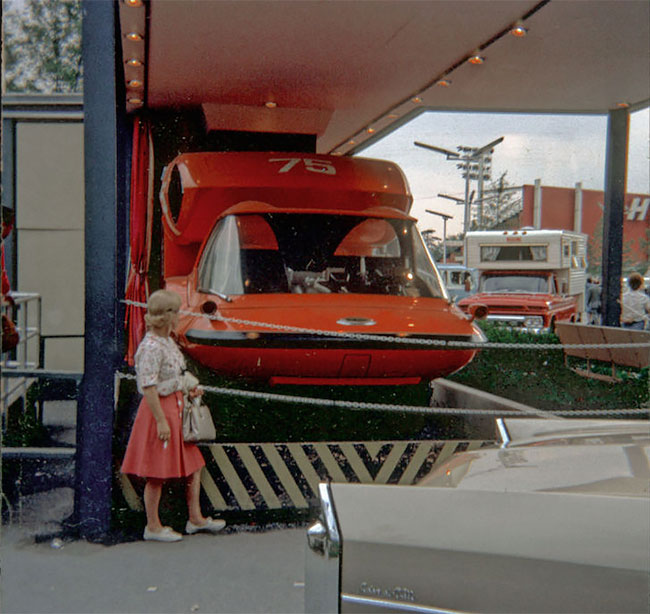 Glow In The Dark Bicycle Path Unveiled In Poland
1955 Ford “Beatnik” Bubbletop: This Bubble-Roofed Custom Ford Is Strange And Wonderful!
This Designer Has Made A Flying Hoverboard That Actually Works
Car Drivers Need To Beware Of The Barnacle
The Lexus Hoverboard In Photos
The 1955 GMC L’Universelle Dream Truck
The Wizard of Robots
Ubi-Camera Let’s You Take Photos With Your Hands
Motorcycle Hybrid Designed As A Survival Bike That Can Travel 300 Miles Without Refueling
Assembly: A Sense of Comfort through Proximity
The Space Hotel
Dad’s First Motorcycle Restored As Father’s Day Gift
Soyuz Spacecraft Lands on the Snow-Covered Steppes of Kazakhstan
Amazing Vintage Photos Of The Grateful Dead’s Wall Of Sound, 1974
New Jeep Concepts
Humanoid Robots at the National Museum of Emerging Science and Technology
Max Factor's Beauty Calibrator: A Beauty-Measuring Mask Analyzes Facial Flaws For Makeup From The 1930s
Punkt. DP 01 Cordless Phone
Mercedes-Maybach Unveils The Super-Luxury Electric Car Of Tomorrow’s World
Concepts From Future Past: Cool Pics Of The 1951 Buick LeSabre Concept Car
reaDIYmates: Your Fun Wifi Paper Companion
Incredible Photos Of Two Roman Ships Which Were Recovered After 2,000 Years In 1929 And Lost Again During WWII
Meet Some Crazy Bikes of 90s
This 48 Cylinder Motorcycle Is One of the Craziest Things You’ll Ever See
Incredible Futuristic-Looking 1939 Duesenberg Coupe Simone Midnight Ghost
Man from Belarus Aged 87 Made His Own Electric Car
"Gatling" Water Gun Created!
Mercedes-Benz Unveils Scale-Covered Concept Car Inspired By Avatar Movie
Can This Surf Gear Prevent Shark Attacks?
A Gallery of Amazing Vintage Photos of Ferraris in the 1970s
1960s, bison, cars, concept, GM, retro, truck