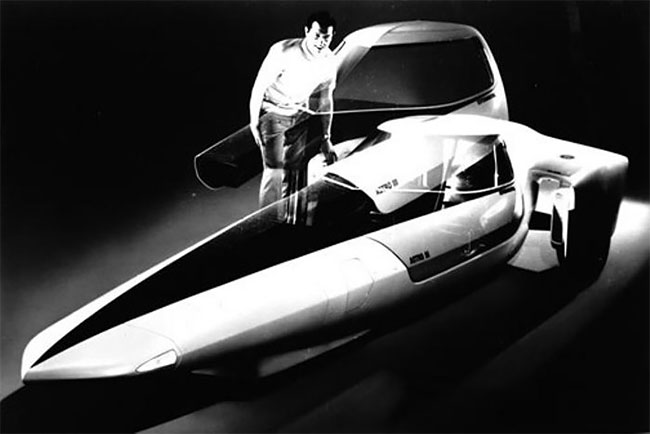 Car designer Bill Mitchell’s breathtaking 1967 Astro I styling study enabled his designers to explore the boundaries between beauty and low-drag forms. At less than three feet high, it was the lowest concept model ever created by GM design, so low that passengers had to use elevator seats to get in and out. A touch of a flush release pad caused the canopy to rise electrically. Once inside, occupants were lowered to a reclining position with another button. 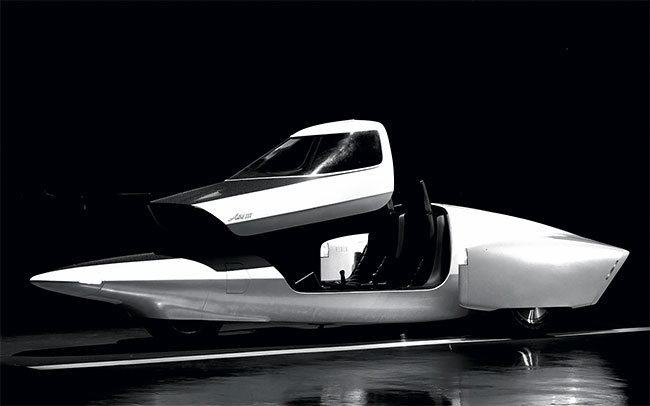 By contrast, the following year’s Astro II, a collaboration between GM Design and GM Research, was a much more production-practical sports car. One of an extended series of mid-engine concepts created by Mitchell and Corvette Chief Engineer Zora Arkus-Duntov, with input from Larry Shinoda, it was designed with future Corvettes in mind. 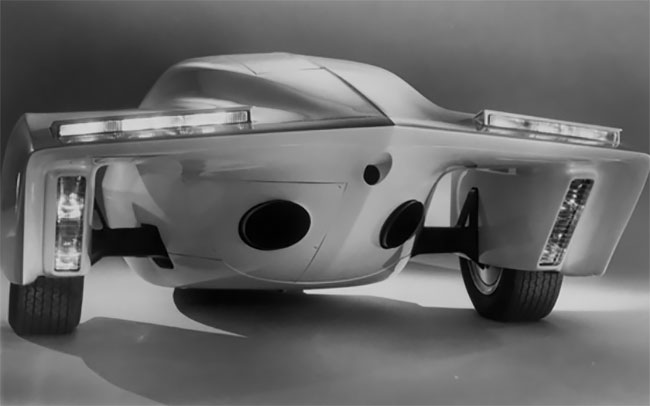 The radical 1969 Astro III is a two-passenger experimental car resembling an executive jet aircraft, even down to its ‘tricycle’ wheel arrangement….though it actually has four wheels, with the front pair placed close together under its nose. Powered by a Model 250-C18 gas turbine engine, it was envisioned as a high-performance vehicle suited for future restricted access or system-controlled highways. A power canopy moves forward and upward for entry, and rear vision is provided by closed-circuit TV with a screen on the center console. 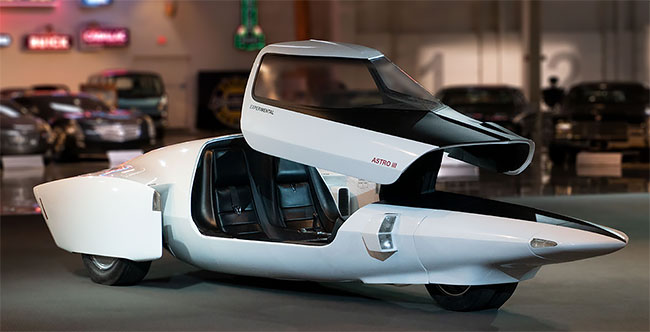 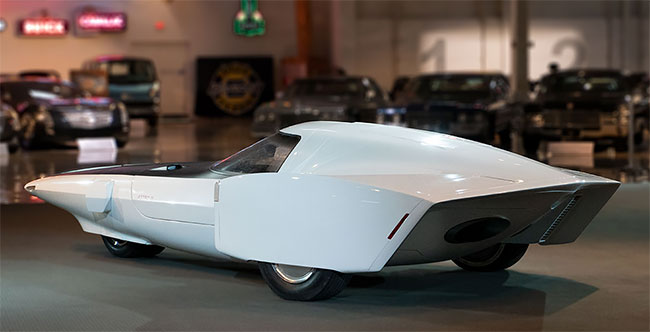 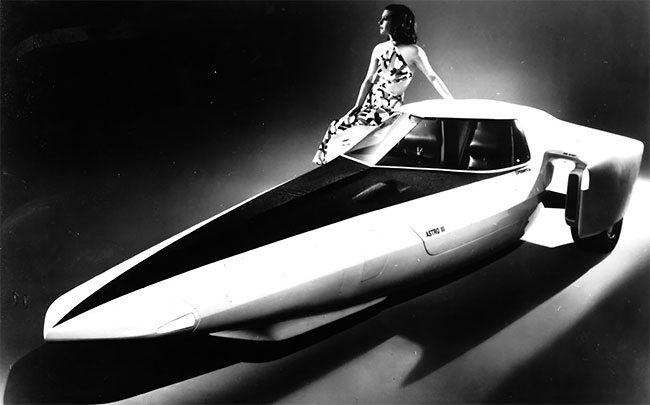 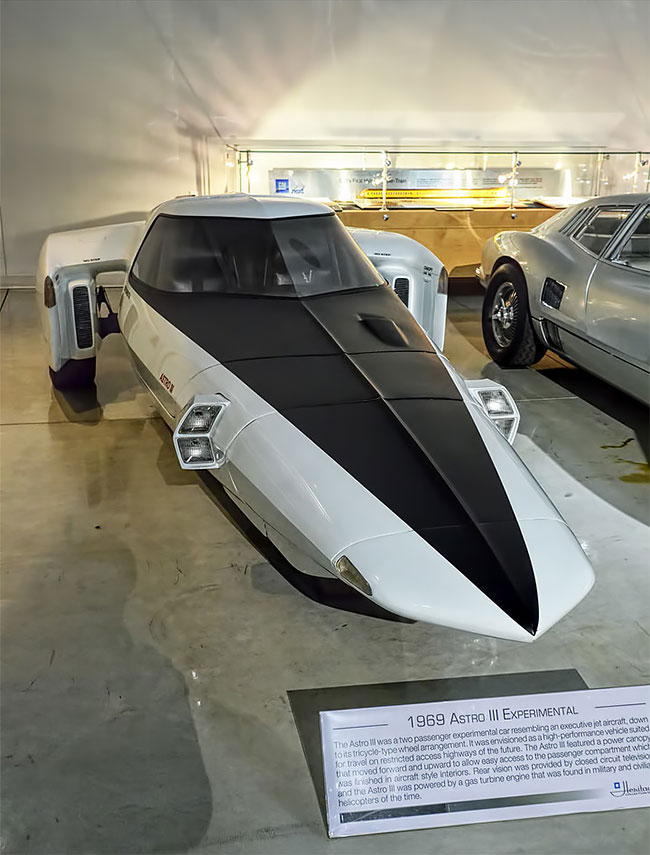 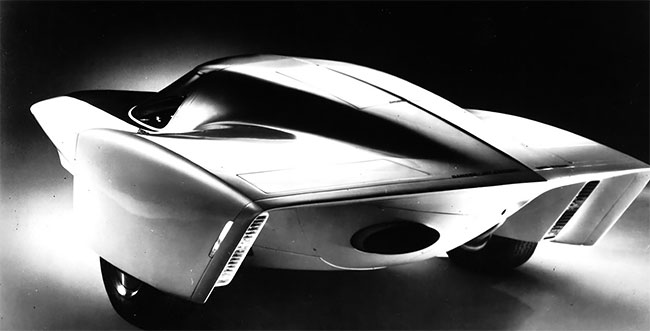 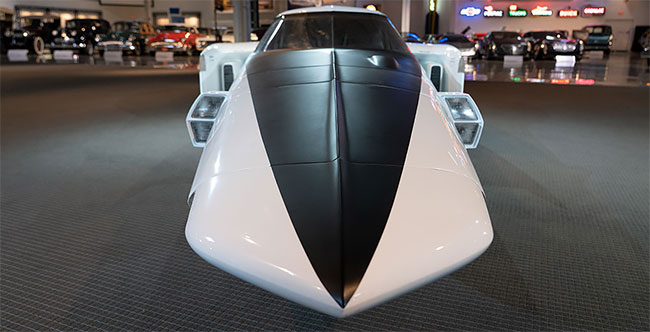 The "Super Brain" Phone Cabin
Beautiful Pics Of Madonna Photographed In Alphabet City, NYC By Richard Corman In 1982
Dreamy Photographs Of Young Women Taken By David Hamilton From The 1970s
Meet "Mechdaddy 2018", The Ultimate Daddy-Daughter Mechwarrior Costume
Cool Pics Show Fashion Styles of ’80s Couples
In the 1970s, American Luxury Cars Were Bursting With Velour and Velvet
“Street Life In London”: Photographer Colorized Photos From Over 140 Years Ago
Amazing Vintage Photos Of Portuguese Women From The Azores Islands In Their Tradition Hooded Capes
Zombies, Vampires, and Goblins-Jazzmen: The Macabre Undead Illustrated by Rob Bliss
Behind the Scenes Photographs From a 1950s Casting Call for a Long-Haired Model
Charming Photos Of Cool Girls Posing With Their Cars In The 1920s
Russian Photographer Exposed That Social Networks Map You For Facial Recognition
The Model of James Webb Space Telescope
Artist Colorized Vintage Portraits Of LGBT Couples To Show Beauty And Support For The LGBTQ+ Community
Björk With a Cute Pixie Cut Photographed by Herb Ritts in 1989
Yokai Horrors From The 18th Century Bakemono Zukushi Scroll - The Nightmarish, Curious And Rather Cute Demons Were Created In The Edo Period
Wyoming Manufacturer Builds World's Largest Coal Hauler
No One Knows Who Took These Superb Hand-Colored Albumen Prints Of Japan In The 1890s
Amazing Vintage Photographs Of The TC-497 Overland Train Mark II, The Longest Offroad Vehicle In The World
The Original Hells Angels: Amazing Photographs Capture Daily Life Of A Notorious Biker Gang In California In The 1960s
Planet Mercury Unmasked: Fantastic Photos Of Crazy New Discoveries
Through Darkness Into Light: The Concept Art Of Ivan Khomenko
Vintage Photos of Famous People With Their Minis From the 1960s and 1970s
Jay Ohrberg’s Bizarre Double-Wide Limousine From the 1980s
1960s, astro, cars, chevrolet, concept, GM, retro