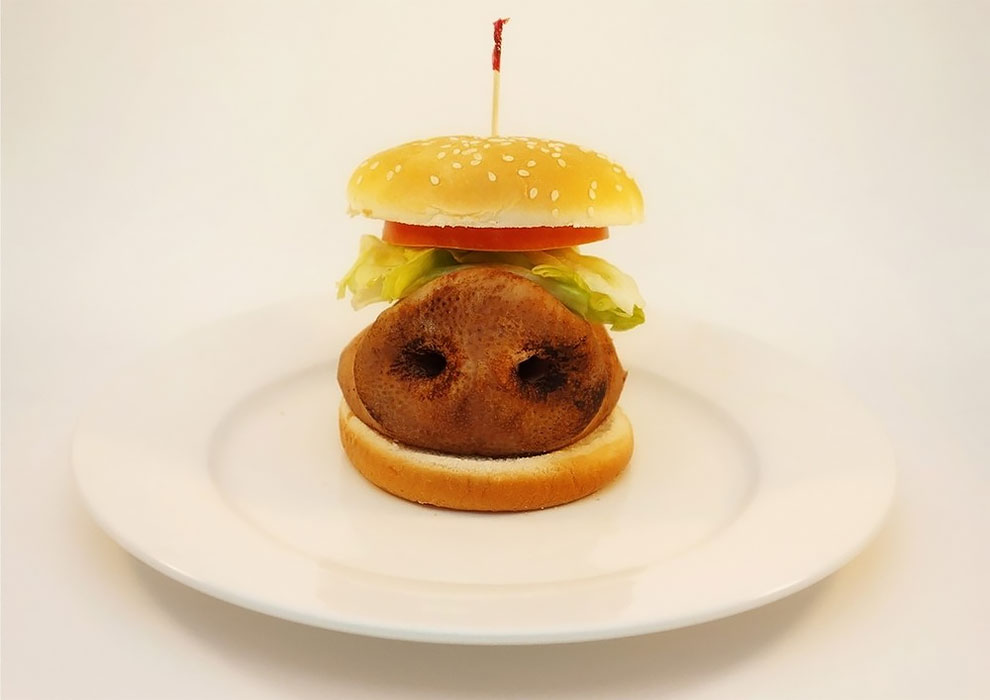 We should altogether stop ourselves from getting sucked into those elaborate, perfectly presented, and weirdly vivid images of food that most fast food restaurants present in commercials and adverts to entice the hungry masses to consume their grubs, and for once, get real. I think we all know by now that those are fake, and their real counterparts, possibly made of something else other than what should be, are not really that appetizing to look at, let alone ingest.

“As a foreigner from a major city in the West, most of us seldom see anything that even closely represents what kind of animal we are eating when we purchase it – it is always pre-packaged, nice and neat, showcased in an air-conditioned supermarket.” 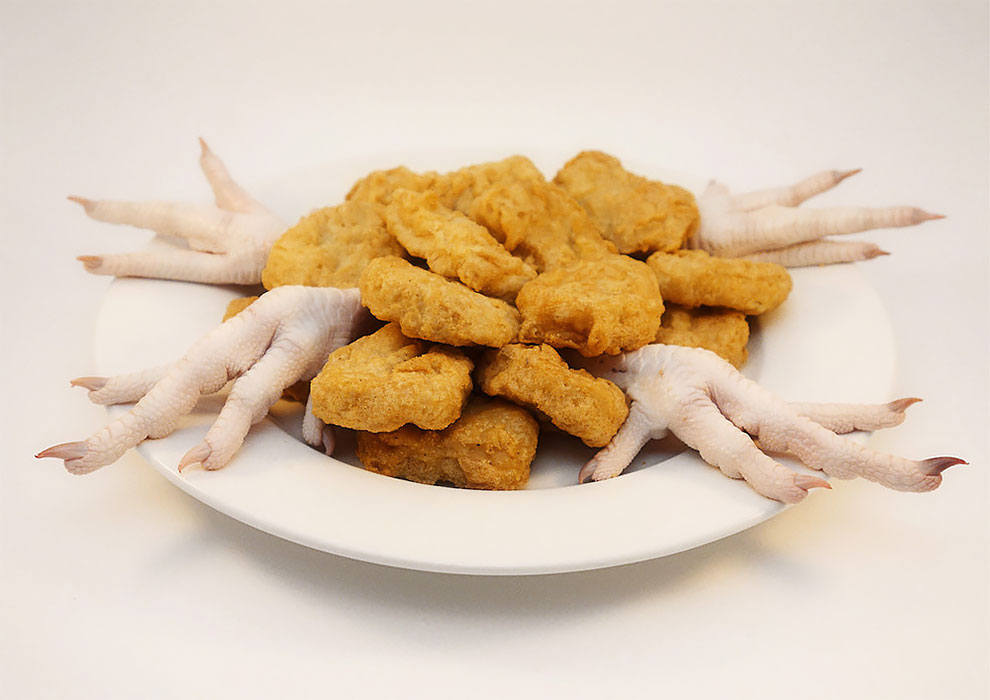 Here’s a series that forces you to look upon face the reality behind your favorite fast food meals. While the rest of the world are getting into food photography, or in many cases, food pornography, with legit photographers coming up with delectable ways to photograph (real) food and addicted Instagrammers spending a lot more time than necessary to get a good shot of their next meal, Hong Kong-based American photographer Peter Augustus is getting on a different bandwagon that is entirely his own. 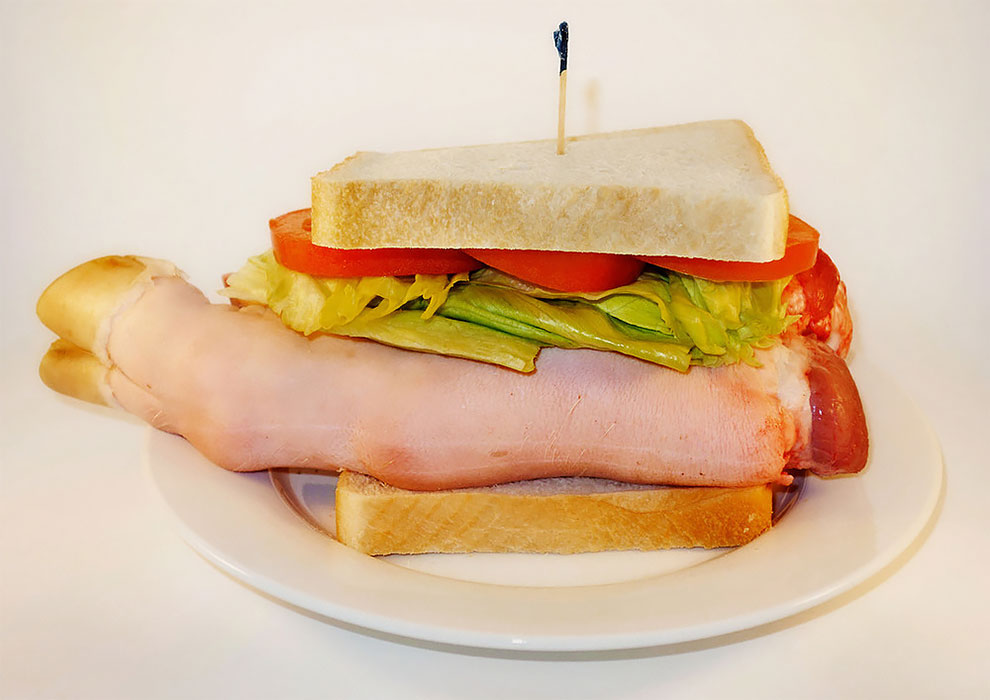 In an attempt to raise more awareness on the horrors of fast food and the chillingly lack of knowledge the Western world has about what ingredients make up their overly-processed, prepackaged food, Peter presents food in a ghastly light in his series aptly called “Mystery Meat.” 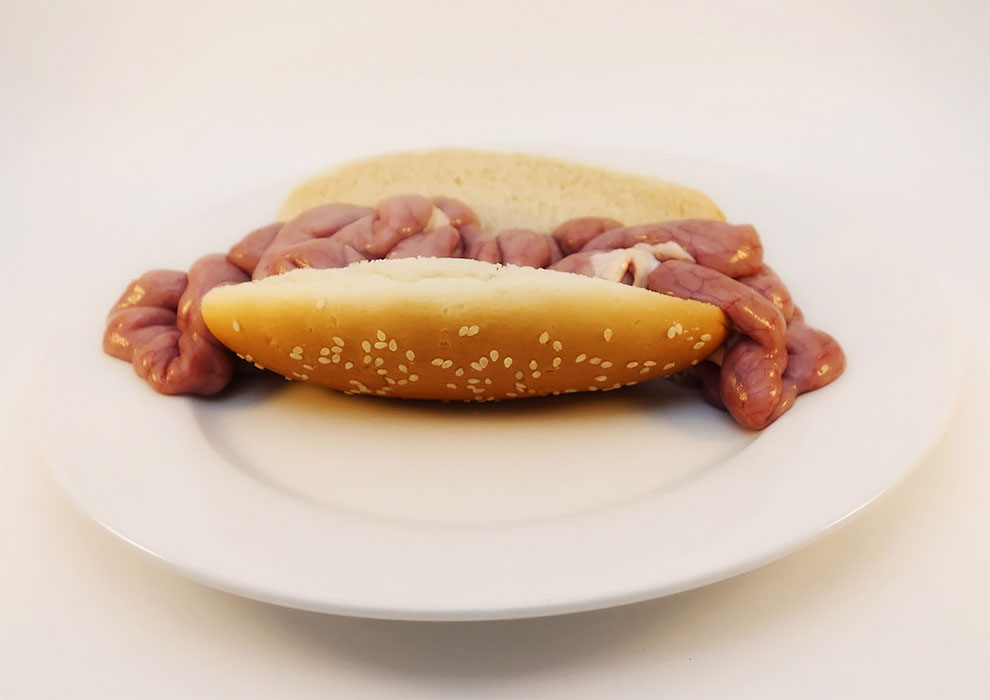 In Mystery Meat, patties are substituted with pig snouts, deli meats are replaced with pig legs, and veiny intestines stand-in for hotdogs–the photographs summing up a hard and effective message that we all must learn and live by.

1920s Fashion Through The Lens Of Police Mugshots
Photos Of Tokyo In The 1970s Seen Through The Eyes Of A Canadian Who Moved There At The Time
Victoria`s Secret Bombshell Summer 2011
Photographer Changes The Physical Appearance Of A Homeless Couple, And The Result Is Amazing
Spectacular Photographs of Newcastle in the 1970s
When He Said "Jump...": The Most Influential Images Of All Time Captured By The Photographer Philippe Halsman
The Obama Wedding Photos Will Remind You Of Better Times
The Winning Photos From The UK's Best Sea View Photography Competition 2019
Choose The People’s Choice Award For Wildlife Photographer Of The Year
Faces Of M’era Luna, The World's Biggest Goth And Steampunk Festival
Window of the World: Europe Made in China
The Monster Building: Photographer Tristan Zhou Captures Epic Photos Of Dystopian Asian Cityscapes
The World’s Greatest Gallery of Bread Butts
George Clooney Gets Pre-Oscar Makeover at Madame Tussauds
Photo of the Day: Steve Jobs Giving His Middle Finger To IBM, 1983
"Blow Job": Strong Air To Face Photoshooting By The Photographer Tadas Cerniauskas
Fake Family Portraits From the Art World
Instagram Account “Influencers In The Wild” Exposes People Who Are Willing To Do Everything For A Photo
How To Organaize A Perfect Birthday Party During The Quarantine Lockdown
Monica Belucci, Bianca Brandolini and Bianca Balti for Dolce & Gabbana, Fall 2012
How To Recognise Clouds – The International Cloud Atlas, 1896
Spectacular Winning Photos From The Minimalist Photographer Of The Year 2020
Rhine Falls: Amazing Aerial Photography by Bernhard Lang
Photographer Mohamed Taher Documents Egyptian Dancers Making The Streets Of Cairo Their Stage
awarness, fast, food, meat