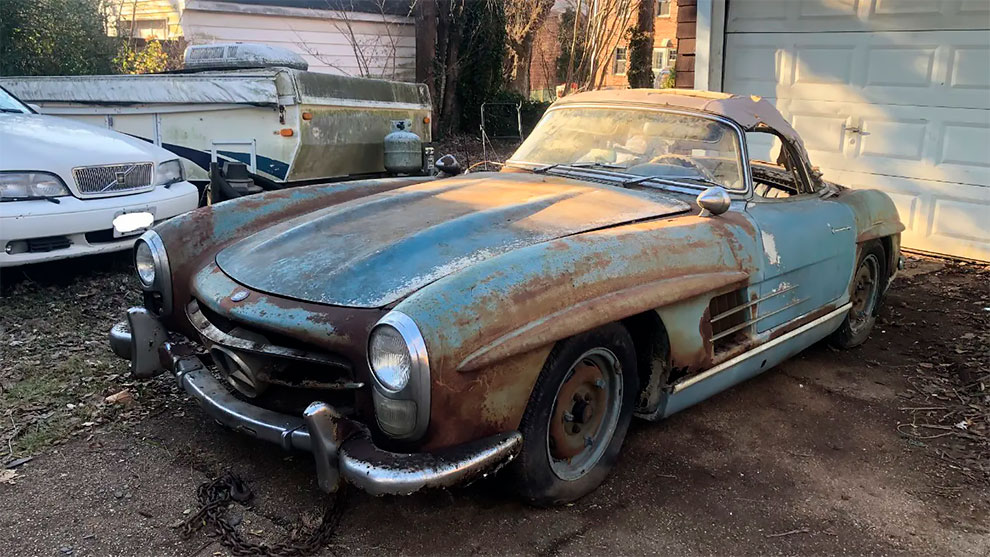 There are crazy undertakings and then there’s this rusted-out 1961 Mercedes-Benz 300SL Roadster barn find that recently sold for an astonishing $800,000 by the folks at Beverly Hills Car Club. The buyer’s identity wasn’t disclosed, but it’s safe to say that whoever it is, they’re in for quite a restoration project. 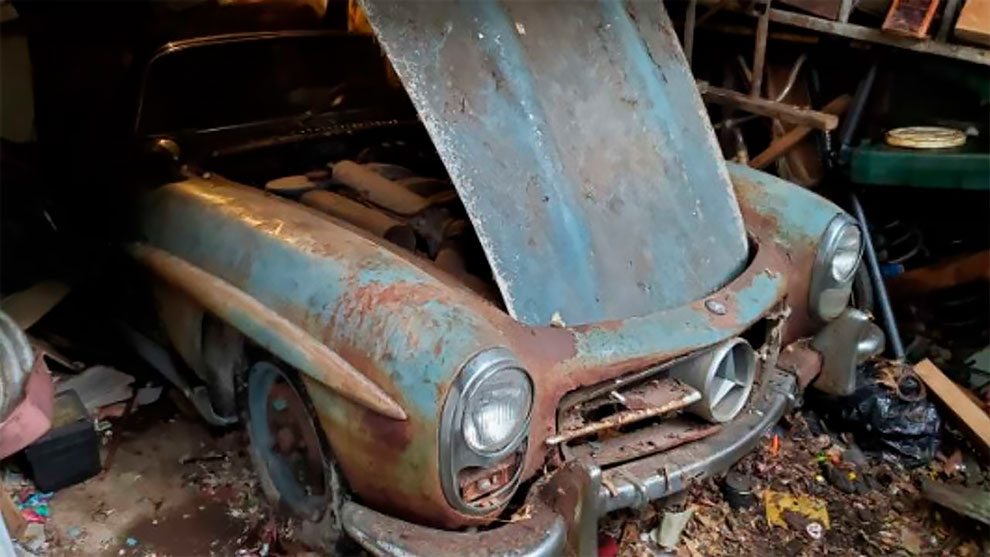 The car was originally unearthed from a barn in an undisclosed location and is apparently one of just 256 ever built and one of just 101 produced in its light-blue color, which is code #354. The sale included documentation dating back to the car’s original bill of sale, the owner’s manual, and even a full stack of service records dating up to 1968 before it was reportedly shoved in a barn. According to its paperwork, it initially sold to its first owner on June 20, 1961. 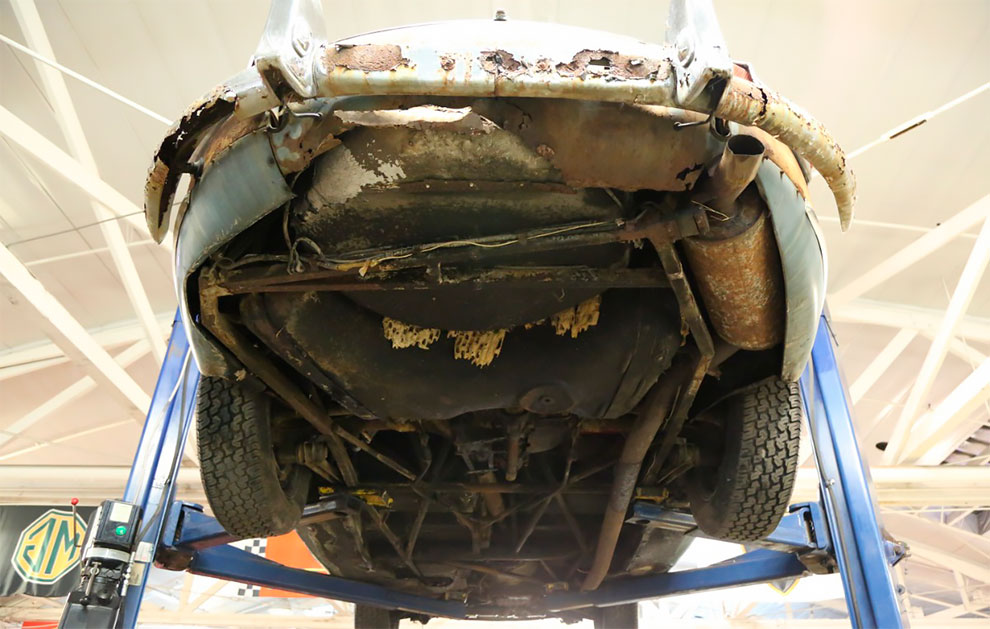 Reportedly stored in a junk-filled garage which no doubt had several leaks, the Mercedes-Benz has lived a hard life. It’s difficult to tell the car originally wore a nice blue with a matching blue interior. Only 75,629 miles show on the odometer, but you be the judge of whether that’s accurate or not. 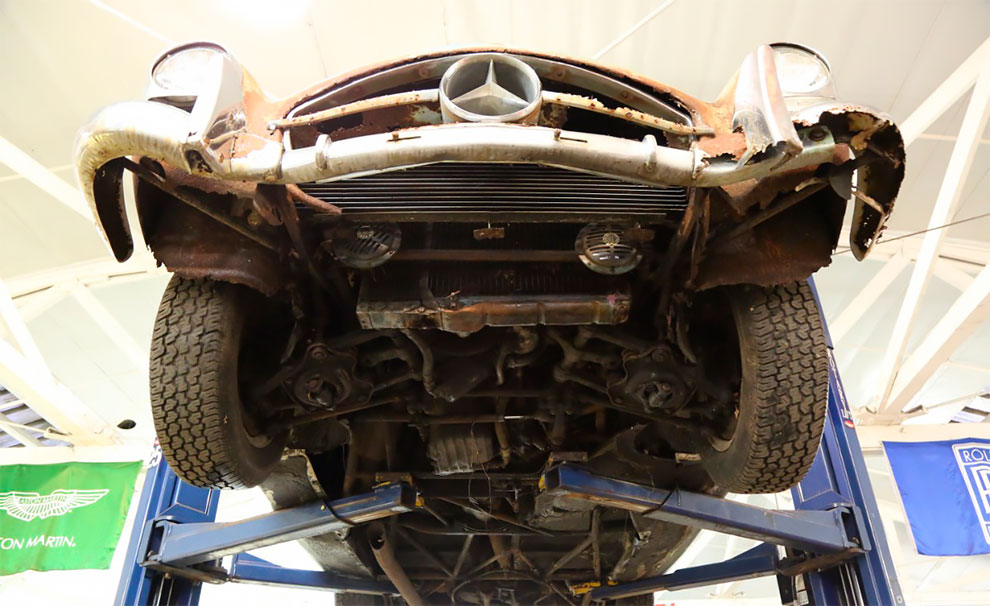 Mercedes-Benz only made the Roadster version of the 300SL until 1963, with production hitting a total 1,858 units. It and the coupe version with those iconic gullwing doors have had a lasting influence on automotive design. 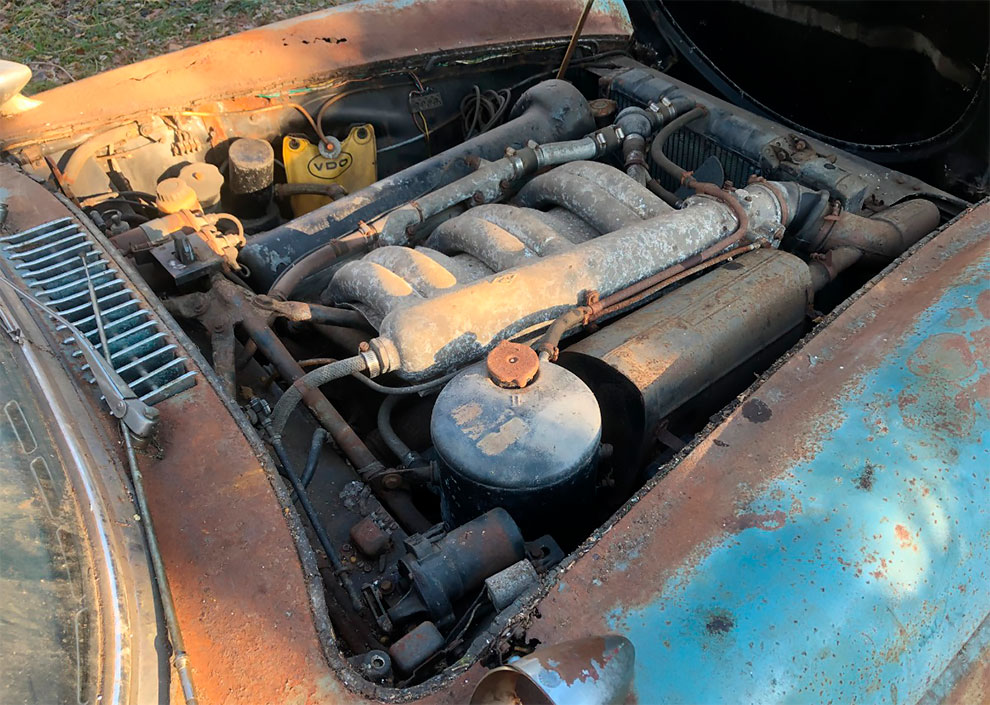 When historical importance, rarity, and an overall iconic persona combine, the result is a classic car with astronomical value. Fully restored, the value of this car would easily punch well above $1 million, and as a concours example it would approach the $1.5 million mark. That puts into perspective the $800,000 price for a junked-out version. 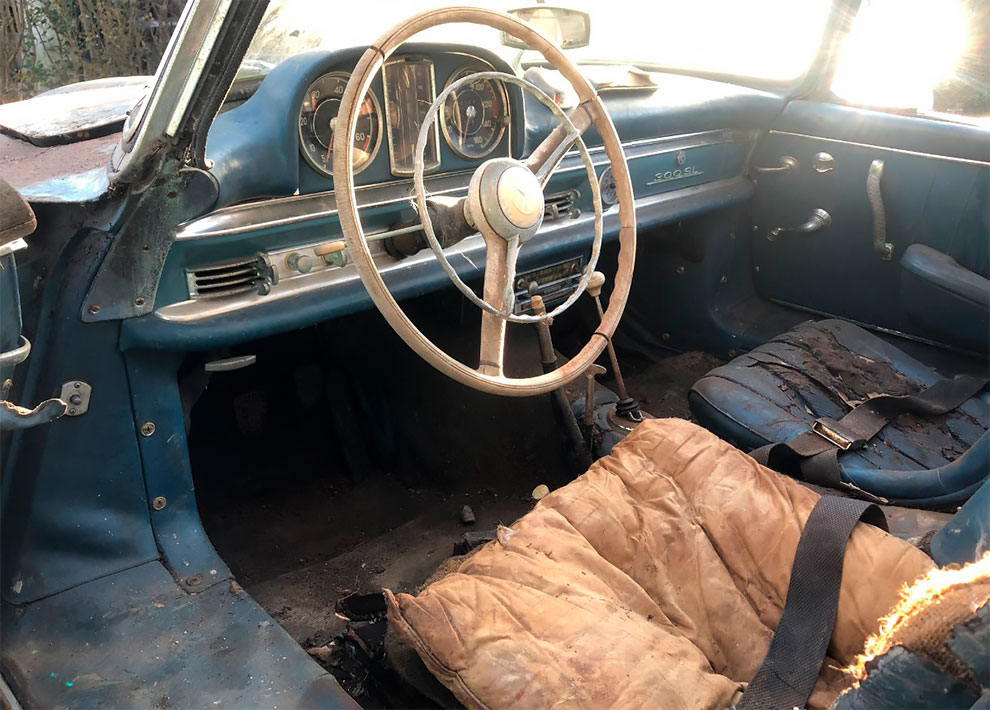 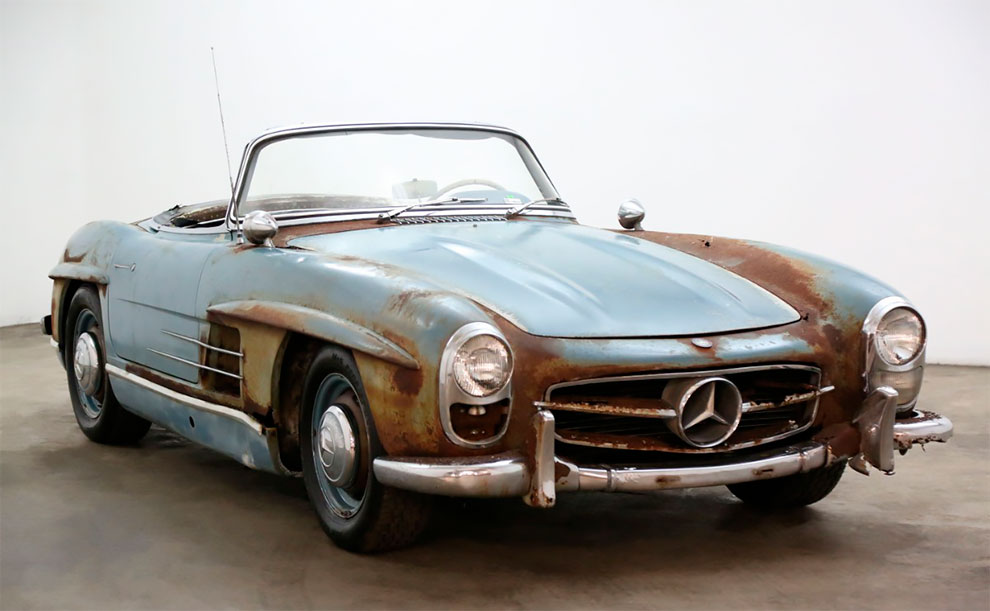 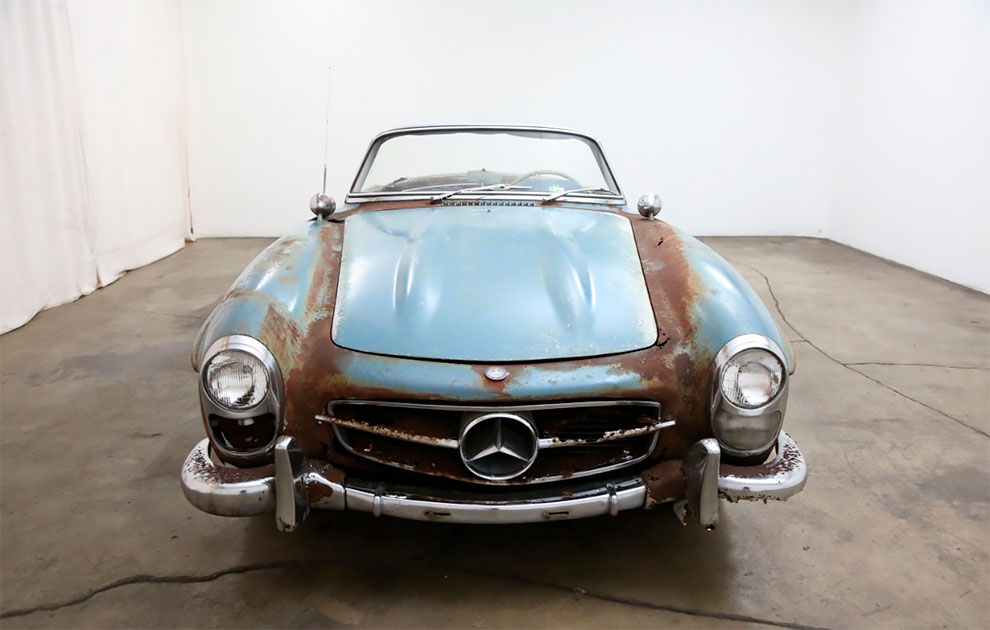 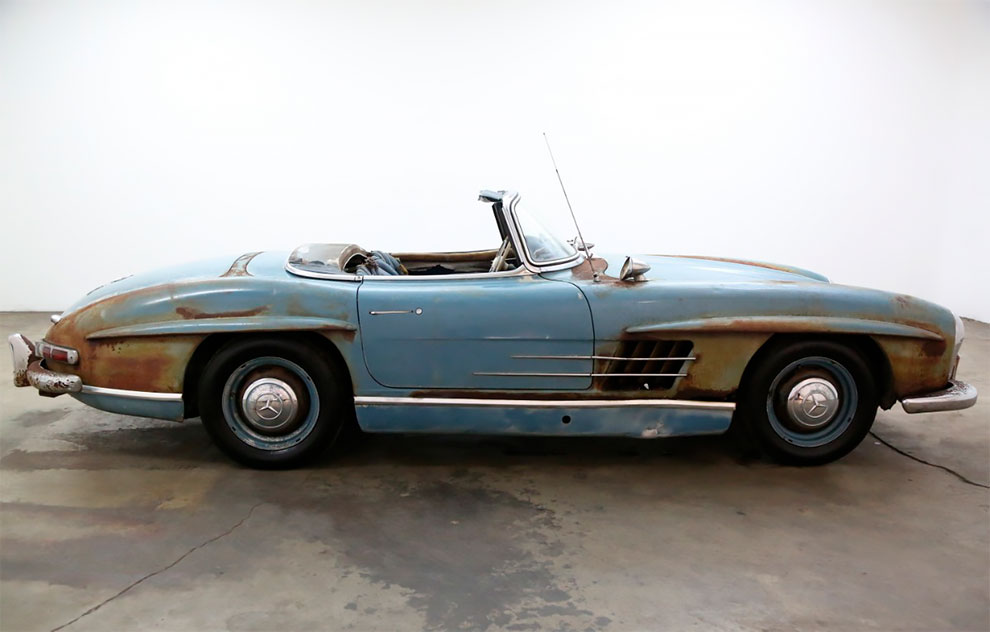 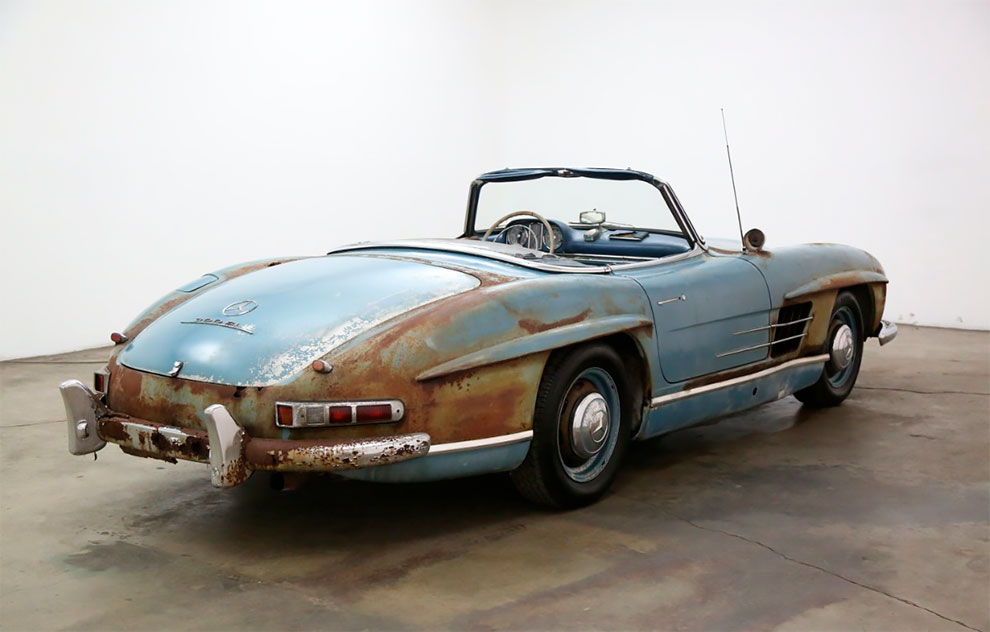 One Of About 50 Fiat 599 Ferves Rangers Still Around!
Y40 Deep Joy – the World's Deepest Pool
Can This Surf Gear Prevent Shark Attacks?
Charming Photos Of Cool Girls Posing With Their Cars In The 1920s
World's First 3D Printed Car
"Sweetheart Grips": WWII Soldiers Would Make Clear Grips For Their Pistols To Display Their Sweethearts
Homes of the Future: A Look Back at Charles Schridde’s Stunning ‘60s Ads For Motorola
"One Day with Salvador Dalí": A Surreal Photo Shoot of Salvador Dalì in His Seaside Villa, 1955
The Supertrain Of 1979 Will Blow Your Mind
The Astonishing Cinematic Autochrome Photography From The 1890s By Heinrich Kühn
Gold ATM Activated, but not for Long
Superb Honda SuperSport Eden By Bandit9 Motorcycles
This New Hair Dye Turns Humans Into Chameleons
HP Brand Re-Design by Moving Brands
A Beautiful Photo Series of Audi F103
This Elderly German Couple Steals The Show Every Time They Go Out
This Art Collective Creates Concepts That Have Emerged From The Coronavirus Pandemic
Humanoid Robots at the National Museum of Emerging Science and Technology
The Futuristic World as Envisioned by Echte Wagner Advertising Cards, 1930
70th Anniversary Citroen H Van
Stunning Vintage Photos of Woody Station Wagons From the 1960s and 1970s
Afro Hair On Album Covers
This AI-Based App Turns People Into Cartoon Characters
Vintage Photos Capture People Wearing Masks During the Great Smog in the 1950s
1960s, mercedes, restored, retro