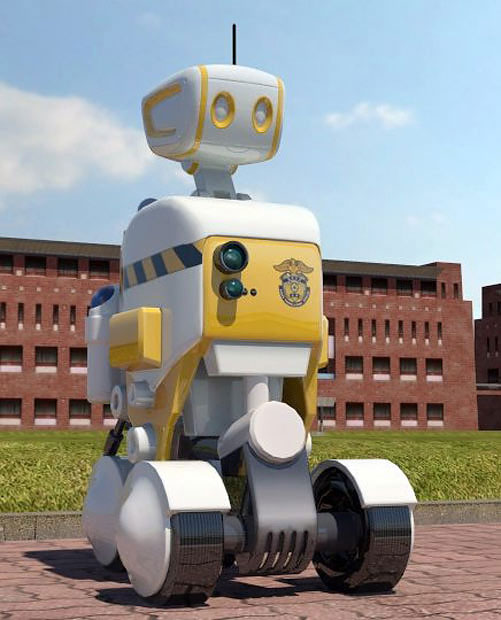 Robot guards with sensors to detect abnormal behaviour will soon begin patrolling South Korean prisons to ease the burden on their human counterparts. A group of scientists has developed the robot warders which can connect prisoners with officers through a remote conversation function. The robots – 1.5 metres (five feet) high and running on four wheels – will mostly be used at night. The robots’ sensors will enable them to detect abnormalities such as suicidal behaviour and violence and report it to officers in charge. (EPA/YONHAP)

The Jeep Wrangler Based G. Patton Tomahawk 6x6 Is What Nightmares Are Made Of
Superb Futurisic Car Concepts Of The 1970-80s
Don't Wait to See How The Earth Gets Old With Greenpeace Russia's EarthApp
The Most Appealing and Performing Electric Cars of 2011
Dominos Pizza Plans to be First Fast Food Chain on Moon
Stunning Photos Of Volkswagen Beetle Rat Rods With Patina Look On The Streets
"Gatling" Water Gun Created!
Innovative Umbrella That Keeps Your Camera Dry When Shooting In The Rain
The Proliferation Of Nostalgia-Inducing LEGO Sets Indicates That They're Far More Than Just A Child's Toy
1934 Peugeot 601 Eclipse, the First Automatic Retractable Hardtop for an Automobile
2007 ‒ 2023 by Design You Trust. Proudly hosted by WebHostingBuzz.
Privacy Policy · Terms of Service · Content Removal Policy ❤️ 🇺🇦