Anthony Hopkins Testing Different Masks for Hannibal Lecter in ‘The Silence of the Lambs’, 1991 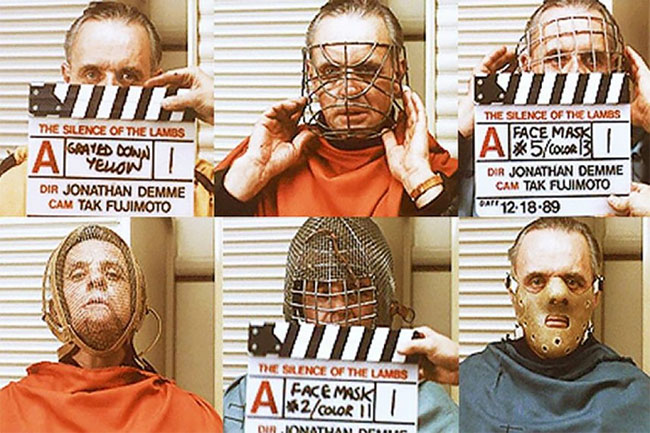 In The Silence of the Lambs (1991), Anthony Hopkins delivers a stellar performance as the convicted serial killer Hannibal Lecter. His performance is in fact so good that it earned him an Oscar for Best Actor despite appearing on screen for only 16 minutes, the smallest screen time ever needed to win that award.

Hopkins’ acting was superb and well deserving of the win, but it would not have been possible if it weren’t for the immense anticipation and aura built around the character Hannibal while Lecter is off screen.

Of course, to make his role as the psychotic cannibal convincing, it was going to take a bit more than simply memorizing the lines and putting on a slightly creepy voice. As soon as Hopkins read the script he had a vague idea in his head as to how the doctor would act, what he’d look like, how he should speak, and what he should wear.

“I read the script, and boom! I knew intuitively how to play him,” he said. “I knew how he looked and how he sounded.”

Frozen Caveman Sculpture Compared To Monolith Appears In Minneapolis
Here Is What ‘Star Wars’ Land Will Look Like, According To Disney’s Model At The D23 Expo
Cool Transformations Of People In The Hands Of The Russian Stylist
Artist Places ‘At-Home Abortion Kit’ Clothes Hangers In Pharmacies To Protest Abortion Laws
Projection Mapping on King’s College Chapel Blends 16th-Century Gothic Architecture with Contemporary Art
Artist George Coghill Creates Funny Cryptozoology and Paranormal Patches
Iconic New York City Buildings Are The Pieces In This Chess Set
This Teacher Wears Anatomical Bodysuit To Class
Artist Makes Cardboard Cutouts With Pandemic Jokes To Lighten This Difficult Time
Russian Artist Transforms Everyday Objects Into “Something Else”
Cable Knit Nails Are The Coziest Trend This Winter
Super Dad Turns Cars Meant For Kids Into Something Straight Out Of Mad Max
Reduce You And Your Family Into 8 Bit Family Signs
Giant Hand-Face Sculpture Looming Over New Zealand Freaks Out Its People
Would You Eat Insects If They Looked Like This?
Tokyo Lights Up At Night In New Glow-In-The-Dark Furoshiki Scarf
The "No-Face" Day: Workers In China Wear Masks To Hide Facial Expressions
Stunning Pics That Defined The 1970s Sportswear
LEGO Note Bricks For Your Note-Taking Needs
Donald Trump Piñatas Are Gaining Popularity
Planet Pins: Tiny Hand-Painted Solar System Stationery
Pantone Colour Of The Year 2019 – Living Coral Is Your Shade Next Year
Drift Away: Beautiful Handcrafted Eco-Friendly Jewelry Made From Driftwood And Bioresin
Baker Comes Up With The Spookiest Halloween Pies, And Here Are Her Best Ones
1990s, Anthony Hopkins, Hannibal Lecter, lambs, masks, movie, silence

This Guy Runs The Most Controversial Instagram Account
Escape Into The Glass Rivers And Lakes Of These Beautiful Wood Tables
A Wearable 'Shark Man' Suit Lets You Build Your Own Private Space Anywhere
Adobe Has Just Launched A Clothing Line With The Worst Stock Photos
This Life-Size Crochet Skeleton Is So Intricate, The Stomach Even Has Half-Digested Food In It
Pastry Artist Bakes More ‘Pie Art’ With New Intricate And Artistic Design
People Who Had One Simple Job And Failed Miserably
New Zealand's New Flag Could Be One Of These Designs
Artist Built The City Of ‘Salem’s Lot’ As A Tribute To Stephen King’s Great Novel
French Designers Create A Tiny Bathroom In A Box
2007 ‒ 2023 by Design You Trust. Proudly hosted by WebHostingBuzz.
Privacy Policy · Terms of Service · Content Removal Policy ❤️ 🇺🇦