“Can’t Place This Here”: A Concrete Fence Stuck in Textures 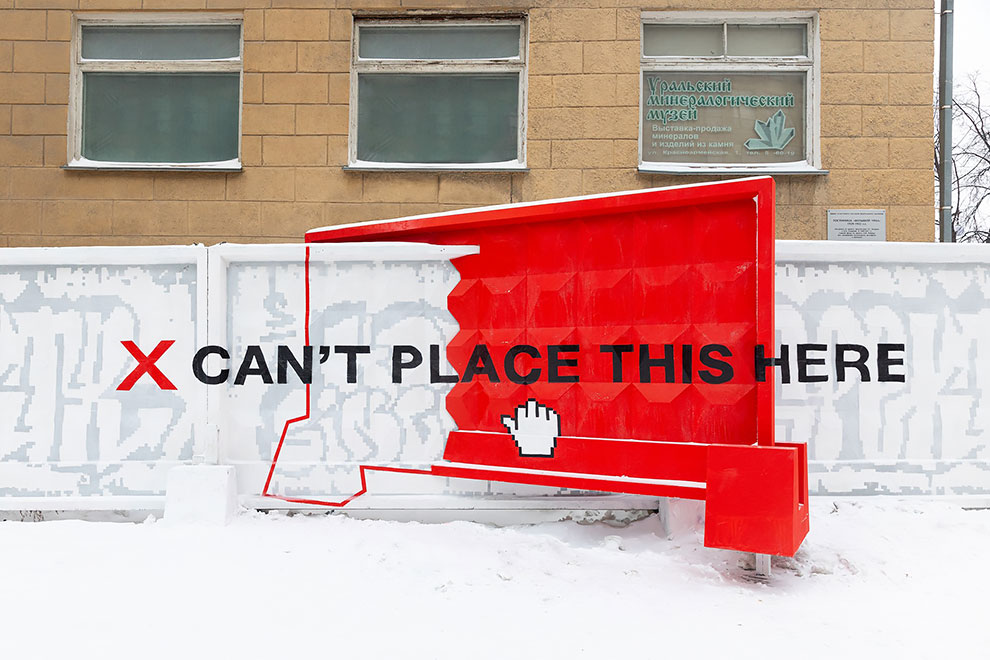 “Can’t Place This Here” is a collaboration between two Russian street art teams: Hot Singles and SPEKTR. This piece was created at CHÖ Public Art Festival in Yekaterinburg, Russia.

The artwork is an architectural intervention: an iconic Soviet concrete fence panel (known as PO-2) is stuck in textures of a real concrete barrier, and stands as a metaphor for the city’s excessive fencing. We think that a fence is a symbol of division. A line between “us” and “them”, between “inside” and “outside”. This is why we think it’s strange to see so many barriers dividing our public spaces”. According to the Kommersant newspaper, more than 2.5 million kilometers of barriers had been erected across Russia in the past 25 years. 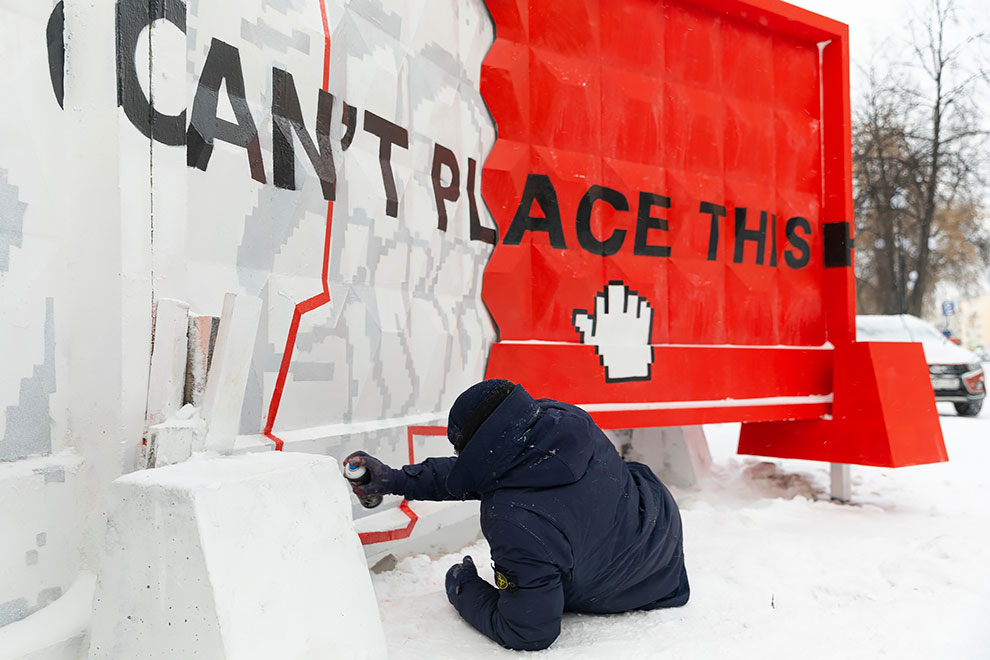 The video game-like syntax of the piece leaves passers-by feeling as if they are inside a city-building simulator. My colleague Andrey Kolokolov explains the idea behind the project: “There’s a feature you get in some games, like strategies and city-builders (Stronghold, Warcraft, SimCity, etc.) called ‘structural overlap.’ It happens when you’re in building mode, and try to place one structure on top of another. When this happens, the structure you want to place lights up red, and the game tells you: ‘Can’t place this here’. Our ‘fence in a fence’ is a statement: there are enough barriers in the city already, and no need for more. Now more than ever, we need to be united, not divided. We should be building bridges, not barriers”. 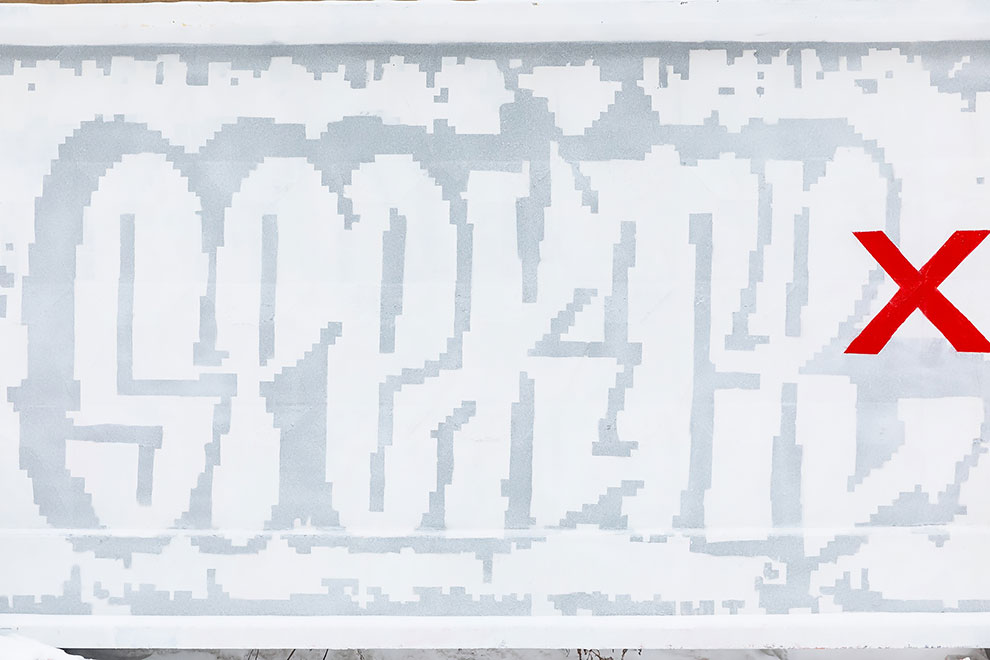 The piece is based on a distinct visual concept. Though the idea itself may be simple, making fences intersect is a tricky business: the panels need to look like they’ve come together accidentally but be aesthetically pleasing at the same time. The SPEKTR and Hot Singles artists meticulously modeled and calculated how the two 3D objects needed to intersect to make the illusion that viewers are in a video game totally convincing. Repeating pixelated graffiti on the panels also contribute to this effect, making the texture tiled. 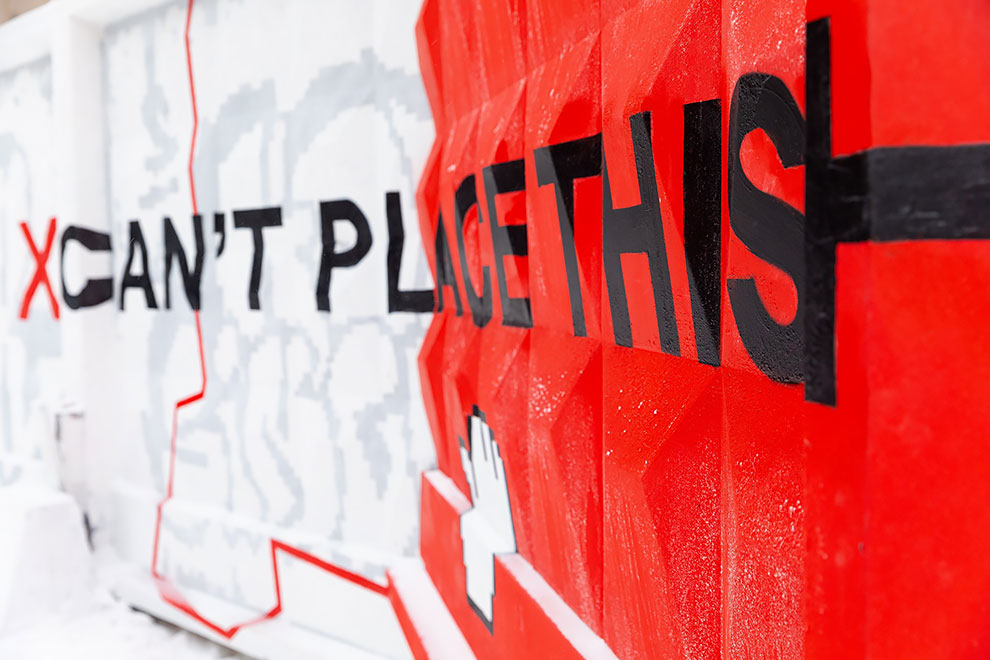 Self-Taught Artist Makes Horse Sculptures That Are Shockingly Good
Every Year, Graffiti Artists Turn This Traffic Circle Into Amazing Legal Art Murals
This Man Transforms Himself Into "Game Of Thrones" Characters
The Magic Unicorn Hood That Has No Special Powers At All But Looks Amazing
Handmade Dolls Of Cute And Creepy Creatures Lovingly Made By Oso Polar
Meet World’s Most Versatile Cosplayer: Young Russian Chameleon Ilona Bugaeva
Artist Wendy Tsao Transforms Kids Drawings Into Adorable Plush Toys
Stunning Rare Photos Of The Emperor Nicholas II Fooling Around With His Friends In 1899
This Bride Spends $170 And 8 Months Crocheting Her Own Beautiful Wedding Dress
This Takashi Murakami Flower Pan Lets You Make Kawaii Pancake Art At Home To Start The Day With A Smile
Life Calendar: How Was Your Day?
This Woman Paints on Horseshoe Crabs
Child Breaks Model Father Was Working On, Mother Turns It Into Gorgeous Car Ruins
Artist Leaves His Paintings For People To Find After Getting Rejected By Art Galleries
Artist Couple Creates Unapologetic Embroideries With Funny And Honest Quotes
The Delicate 3D Embroidery Of Justyna Wolodkiewicz
Barber Abandons Plans For Expensive New Flooring... And Covers His Shop With 70,000 Pennies
Stunning Photos From The Bosch Parade, The Sailing Parade In The Spirit Of Jheronimus Bosch
Meticulous Miniature Handcrafted Meals
Artist Creates Magical Creatures With Long Limbs Made Out Of Oak Tree Roots
Amazing Vintage Photos Of Portuguese Women From The Azores Islands In Their Tradition Hooded Capes
Remembering The Mod Top: Amazing Flower Powered Top Car Designs From The 1960s And 1970s
Miniature Paper Cut Scenes By David Allen Reeves
Fan Yanting's Minimalistic Ceramics Come With Adorable Faces
fence, games, installation, russia, streetart, textures