When Buick Offered Convertible Tops in Designer Fabrics in 1961 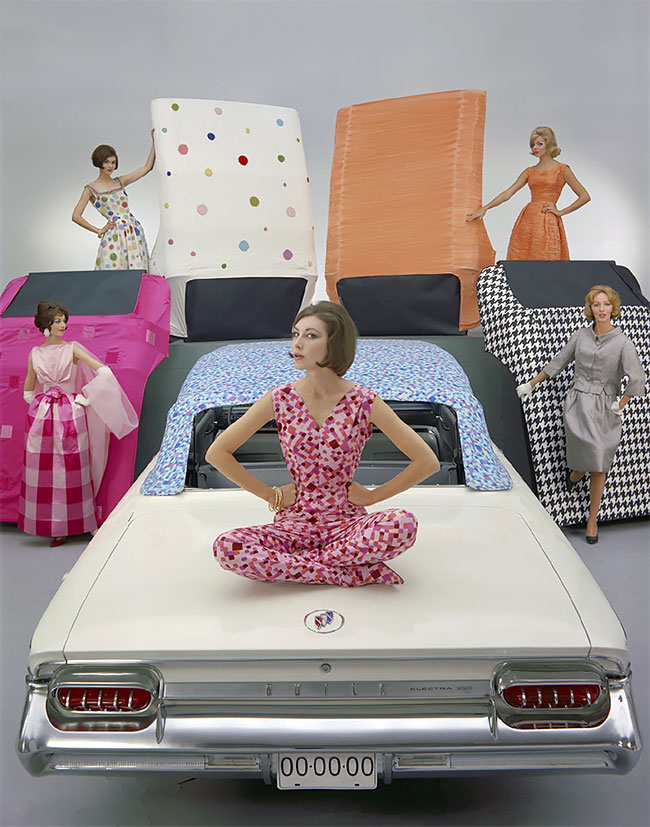 A selection of stylised convertible tops that didn’t make it onto the options list for the 1961 Electra 225 Convertible. 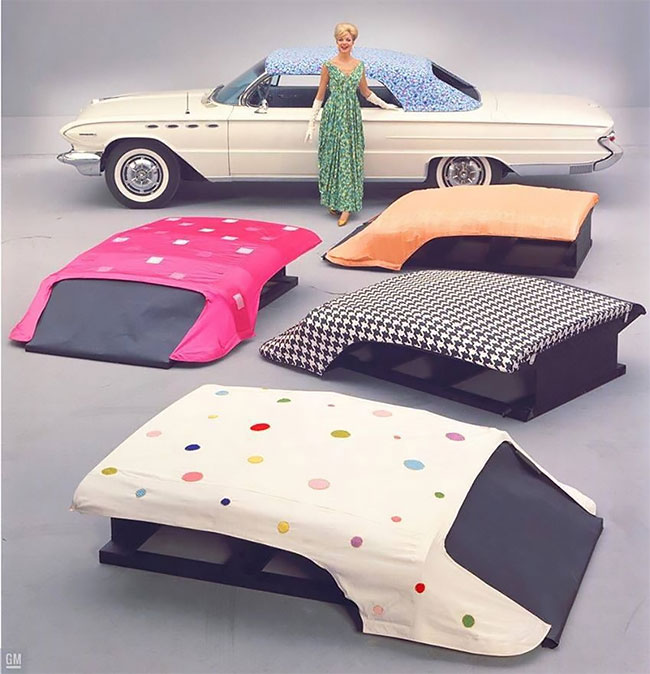 Styling was the number one factor in selling cars in the 1950s and 1960s. Its importance justified the countless man-hours expended on a variety of ideas. Thinking outside the box was job one at GM Design. With that in mind consider this idea for a fashionable convertible top. Was it a good idea or a bad one? Regardless of one’s personal taste, beauty was and always will be in the eye of the beholder. In this case the beholder was evidently expected to be a woman. 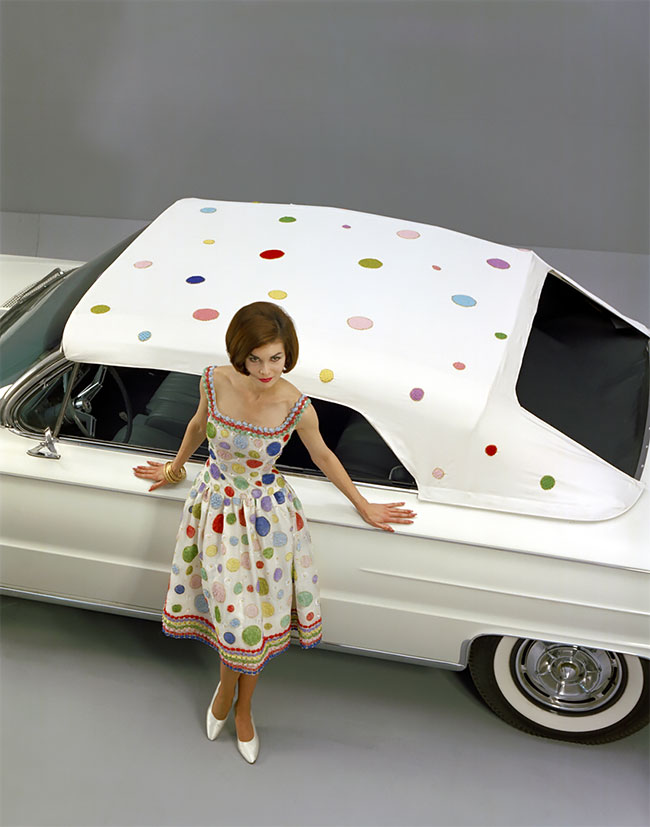 Whether this was a serious proposal for production or for a series of show cars is not known. In the 1960s, Bill Mitchell was the head of GM Design, so this was done under his watch. Other than the obvious, the author has no other information on the convertible top fabric ideas; these were not real convertible tops, but rather cloth stretched over what was likely a fiberglass form. 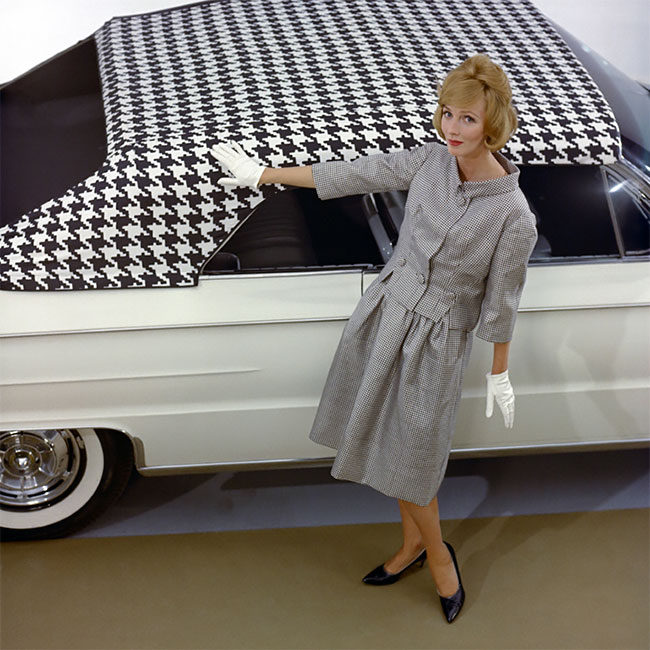 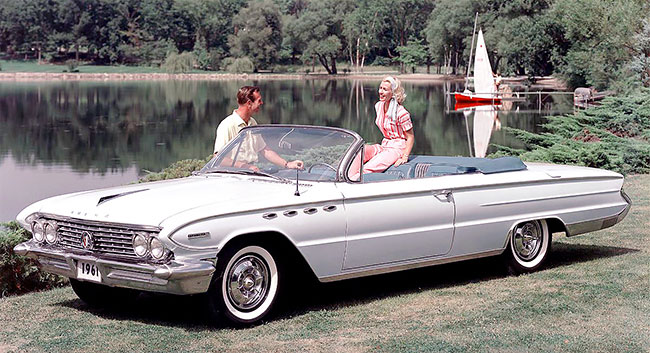 Forms of Nature Created from Thousands of Ceramic Shards by Zemer Peled
Fantastic-looking Custom Made Steampunk Bullet Shell Chess
Brittle Skeletons Crocheted From Discarded Textiles By Caitlin McCormack
Aerial Photographer Created A Miniature Utopian Village And It Took Him 2 Years To Finish
Japan’s Realistic Napping Cat Hat Puts A Purring Kitty On Your Head
Norwegian Artist Makes 'Pillows' From White Marble
These Artists Makes Belgian Lake Mysteriously Glow
Woman Designs Masks That Are Custom Printed With Your Own Face
Self-Taught Baker Creates Incredibly Realistic Cakes That Look Like Bowls Of Pasta, Donor Kebabs And Junk Food
Inimitable Hand-Made Babydolls By Elena Kirilenko
9-Year-Old Kid Who Kept Getting In Trouble For Doodling In Class Gets A Job Decorating A Restaurant With His Drawings
Sculpted Meals So Beautiful That You'll Starve Rather Than Disturb Them
2017 Color Of The Year Is Greenery According To PANTONE
Tattoo Artist Métamose Creates Visual Poems On Skin
17 Photos Of Classic Cars Next To Their Modern Version
Italian Artist Recreates Famous Roman Emperors Through His Realistic Sculptures
This Baking Artist Just Won The Internet With Her Realistic Breaking Bad Cake
Every Holiday Caroline Eriksson Makes Something Crazy Out Of Gingerbread
Confectioner Bakes Stories From Pies That Are Too Beautiful To Eat
Would You Eat Insects If They Looked Like This?
Get Shit Done With Mi Goals
With 33 New Looks, Barbie Is Finally Embracing Different Standards Of Beauty
Artist Turns Her AirPods Into Earrings In Order to Keep From Losing Them
IKEA-Inspired Manuals Will Teach You How To Get Over A Breakup
1960s, Buick, fabrics, top

Weird, Provocative And Unusual Anatomical Jewelry By Polina Verbytska
Zero Fucks Coins Allow You To Literally Give Zero Fucks
Inception Coffee Table By Stelios Mousarris
The Future Ain’t The Same As It Used To Be
Japanese Photographer Turns His Closet Into Charming Work-From-Home Space
Eric van Straaten And His Realistic 3D Printed Sculptures
This Super Realistic Modern 3D Art Will Impress You!
Cool Transformations Of People In The Hands Of The Russian Stylist
A Photo Set of The 1960 Dodge Dart Phoenix D-500, a Reflection of The Jet-Age Styling of The Late 1950s
This Modern Japanese Fishing Boat Designed With Graphic Motifs
2007 ‒ 2022 by Design You Trust. Proudly hosted by WebHostingBuzz.
Privacy Policy · Terms of Service · Content Removal Policy ❤️ 🇺🇦