If you look around you, you’ll realize the world is filled with empty canvases. Art can be created onto any platform. Every town is filled with empty walls that are often overlooked. Fortunately for us, every society has a handful of artists who have the creative eye to transform all these blank boring walls into something exciting to look at. They’re determined to turn the world into a public art gallery and so far it looks like they’re succeeding.

Check out some of the amazing street art transformations below. We’ve provided a before photo for each one just so you can see how drastic the transformation was. 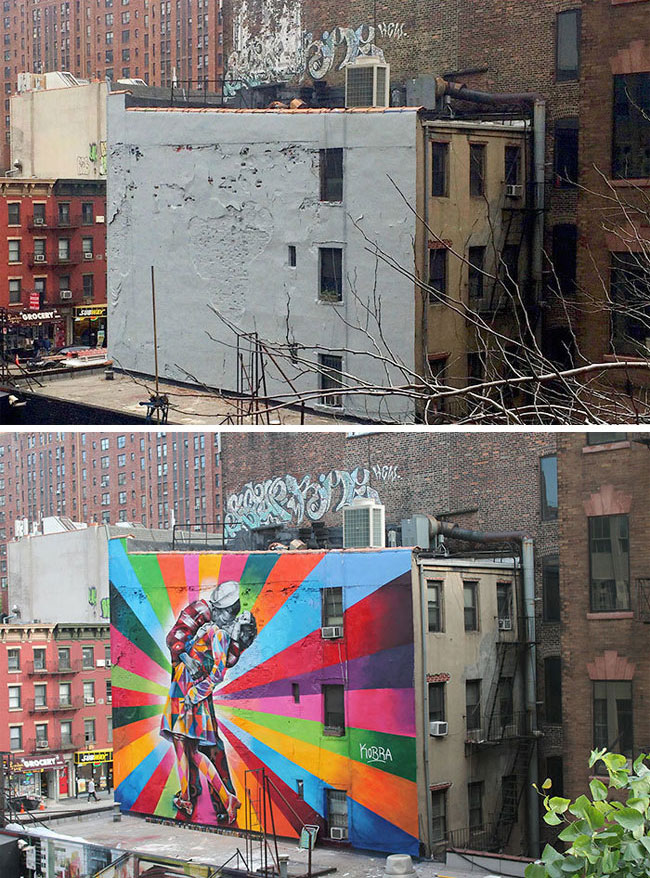 Elvert Barnes / Mary Lane
The infamous kiss recreated onto a blank wall with vibrant colors as the background. 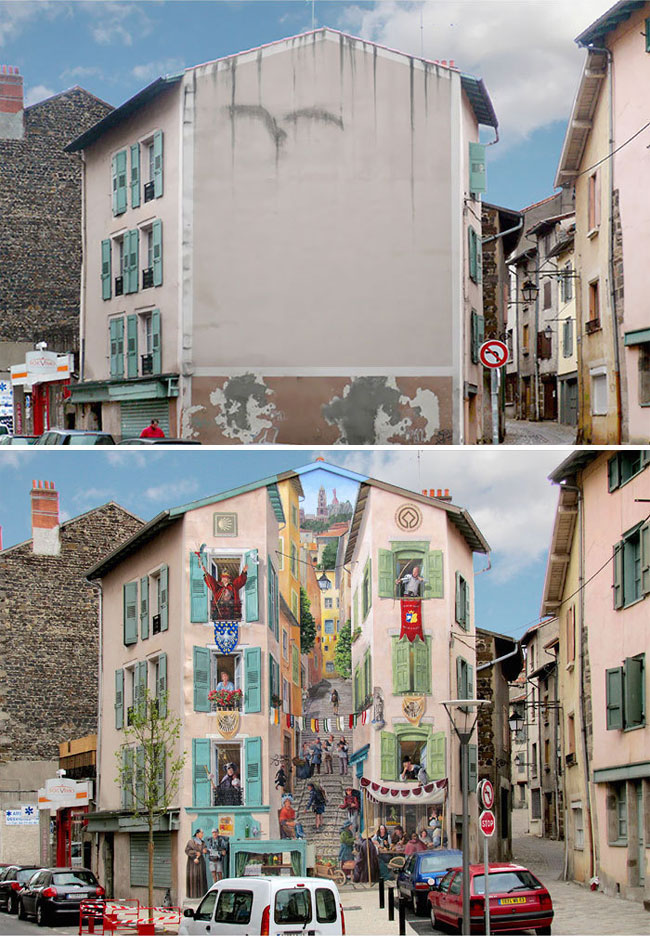 Patrick Commecy
The side of what looks like an apartment complex building painted over to look like more windows and a center pathway. 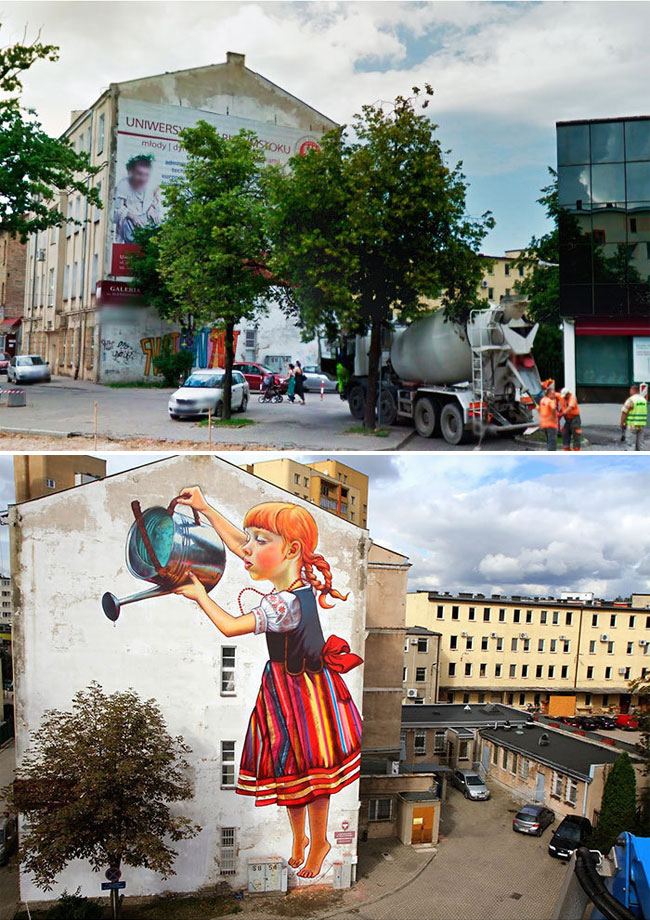 Natalia Rak
A plain wall and big tree transformed into a mural of a big girl watering a smaller tree. 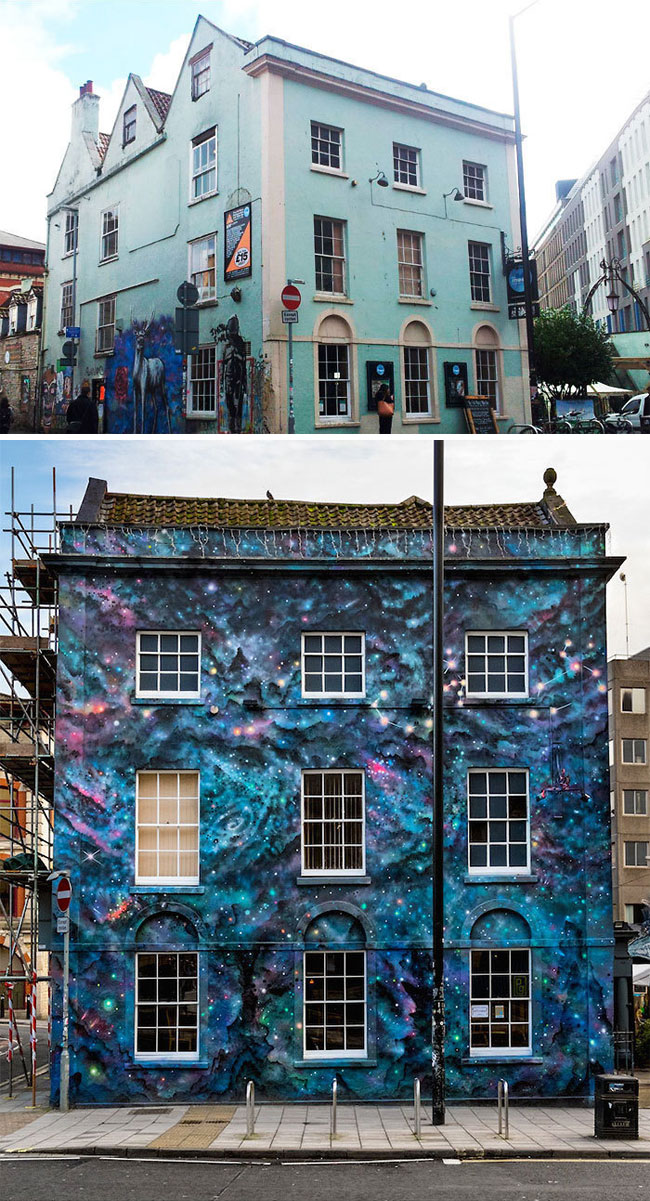 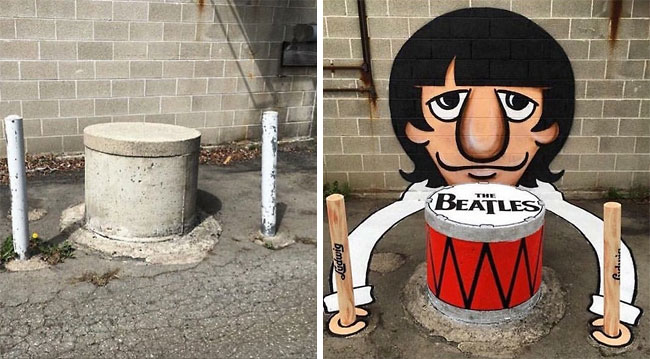 Reddit
A circular block transformed into a drum with an illustration of Ringo Starr from the Beatles on the wall behind it. 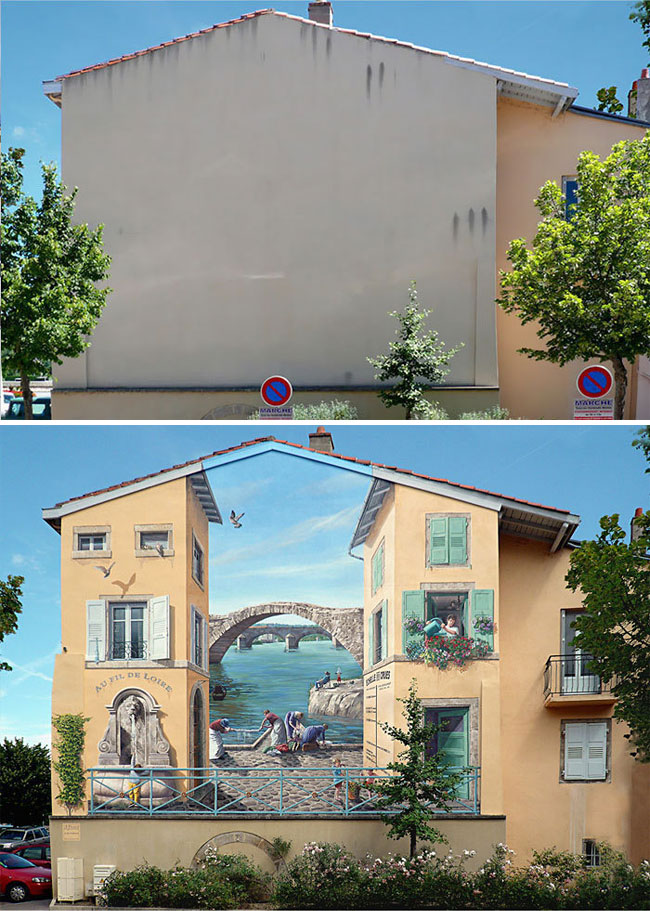 Patrick Commecy
A plain wall transformed to look like two separate buildings with a lake or ocean in the background. 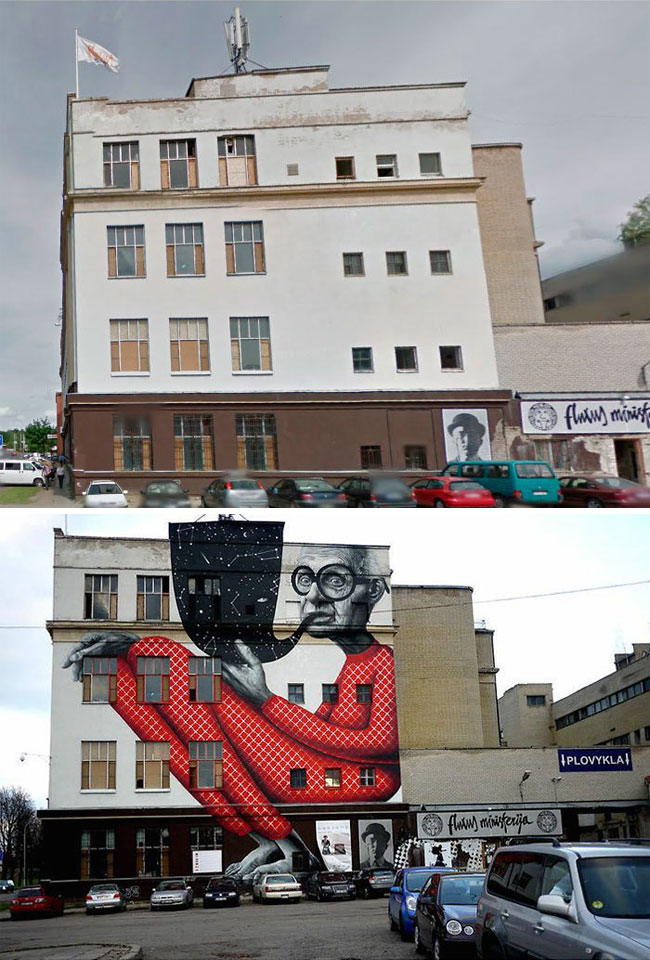 Gyva Grafika
A photorealistic mural of an old man in his onesie holding a big black pipe added to the side of a building.

Seth Globepainter
A unique mural of a girl sitting on top of a colorful umbrella that’s on top of grey umbrellas on a tall plain wall. 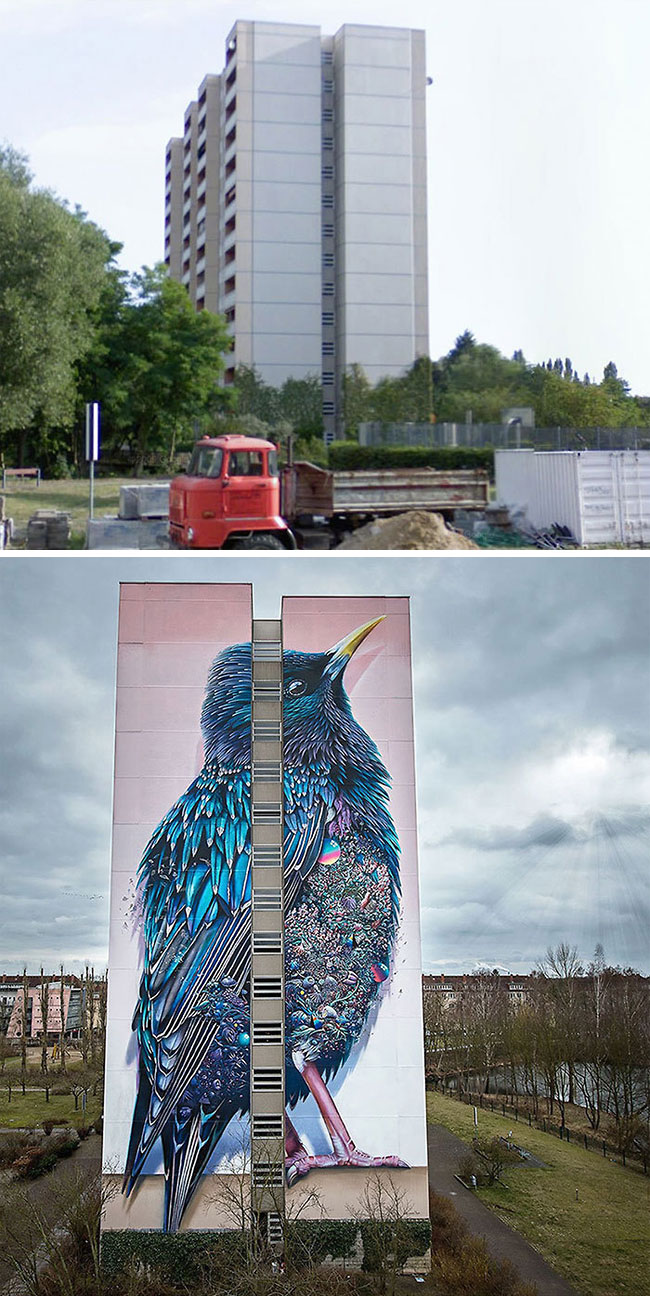 Nika Kramer
Two plain panels that are on the same side of a building that are now depicting a huge mural of a bright and vibrant bird.

Seth Globepainter
Two inverted images of each other on one brick wall: sky and brick clothes versus brick and sky clothes.

The Whole Town Gets Repainted In Vibrant Graffiti, Palmitas, Mexico 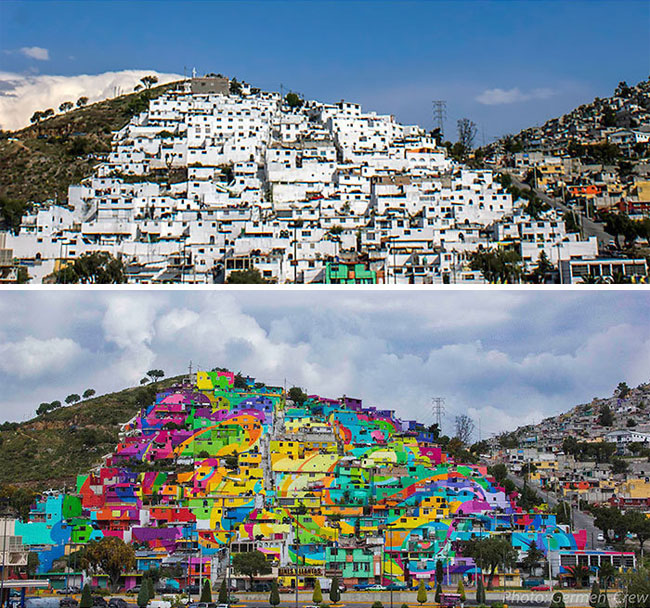 german crew
A whole town of plain white-colored homes painted over with vibrant colors that depicts swirls when looked at overall. 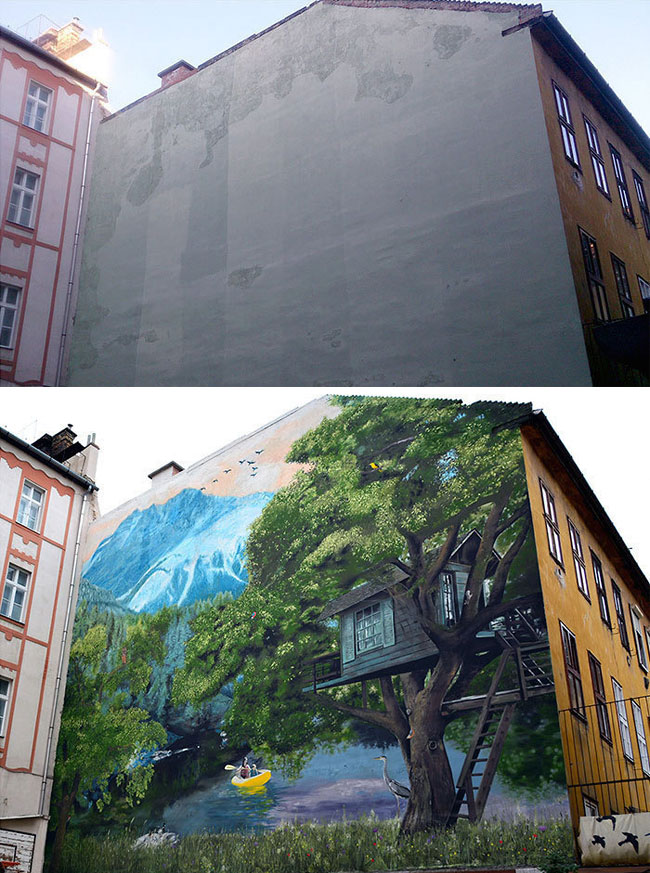 neopaint
A plain wall transformed to depict a serene scene of a treehouse in front of a lake and mountains. 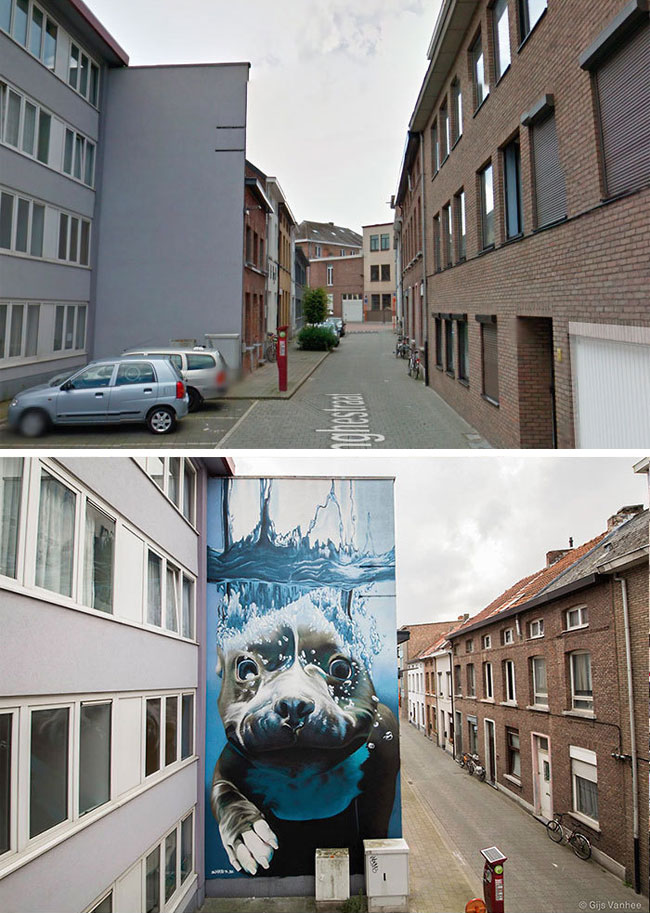 Gijs Vanhee
A fun mural of a dog taking a dive in some water on a small wall separating two buildings. 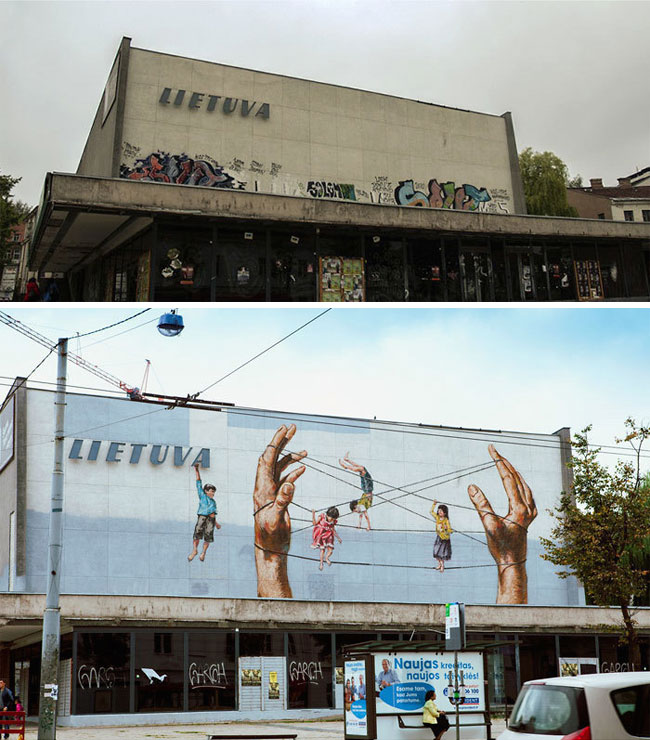 Ernest Zacharevic
The top portion of a building transformed from old graffiti to a mural of children playing on a bunch of strings held up by a big set of hands. 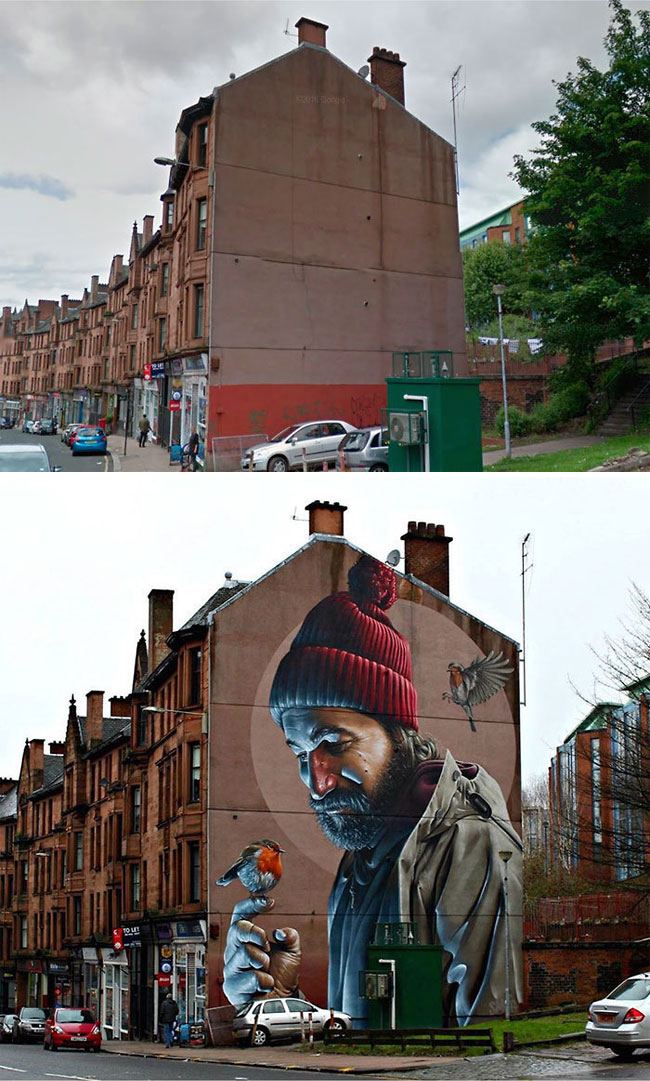 smug
A photorealistic mural of a man holding a bird added to the blank side of a brown building. 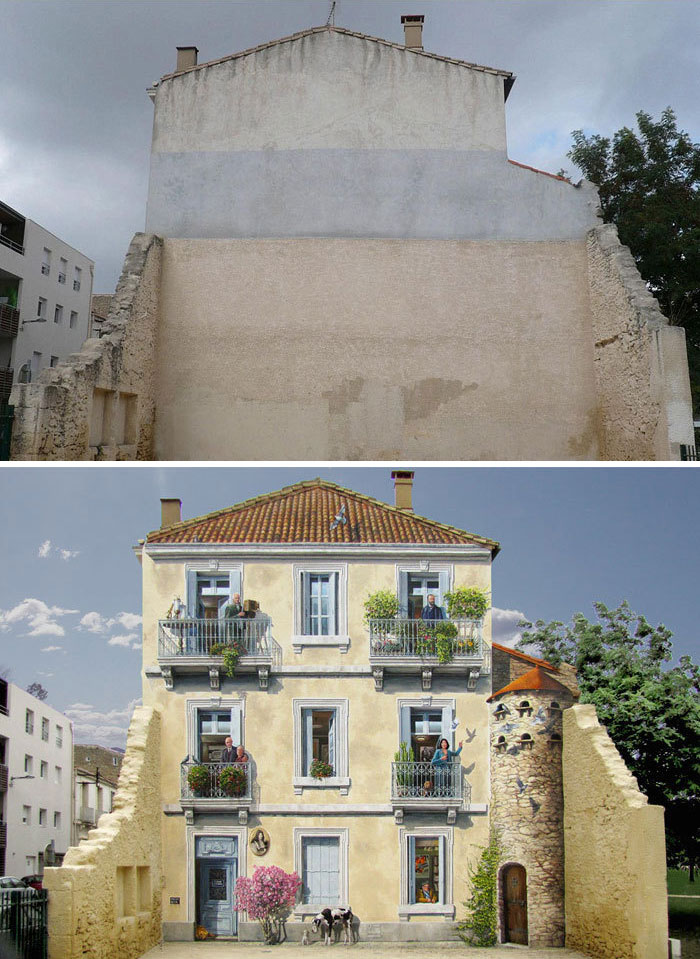 Patrick Commecy
A side of a building illustrated to look like an apartment complex filled with doors, windows, and people. 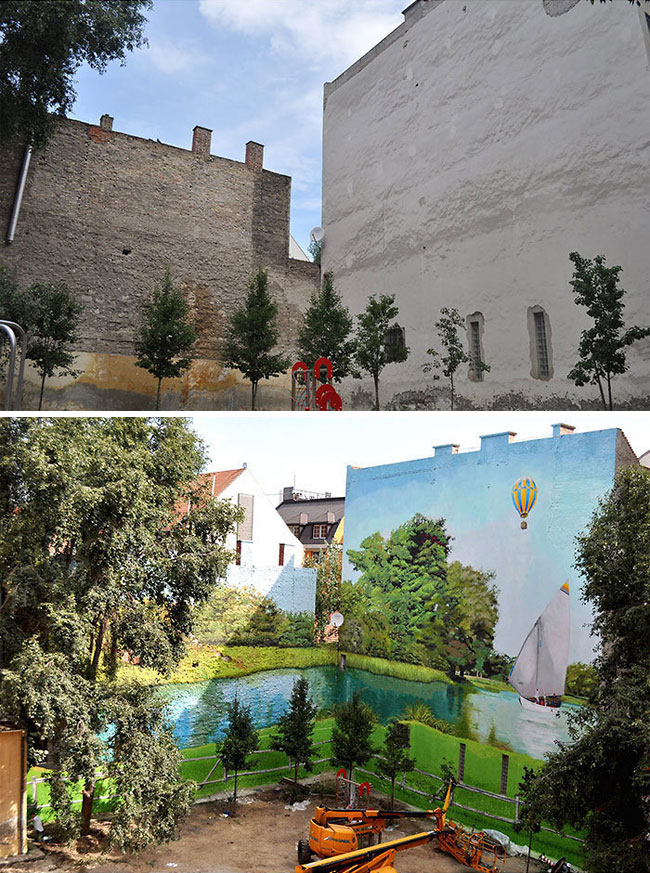 neopaint
Two connecting buildings painted over to create one overall big scene of a sailboat riding along a lake with a hot air balloon up above.

Patrick Commecy
A plain side of a building transformed to look like a brick wall with men working on construction. 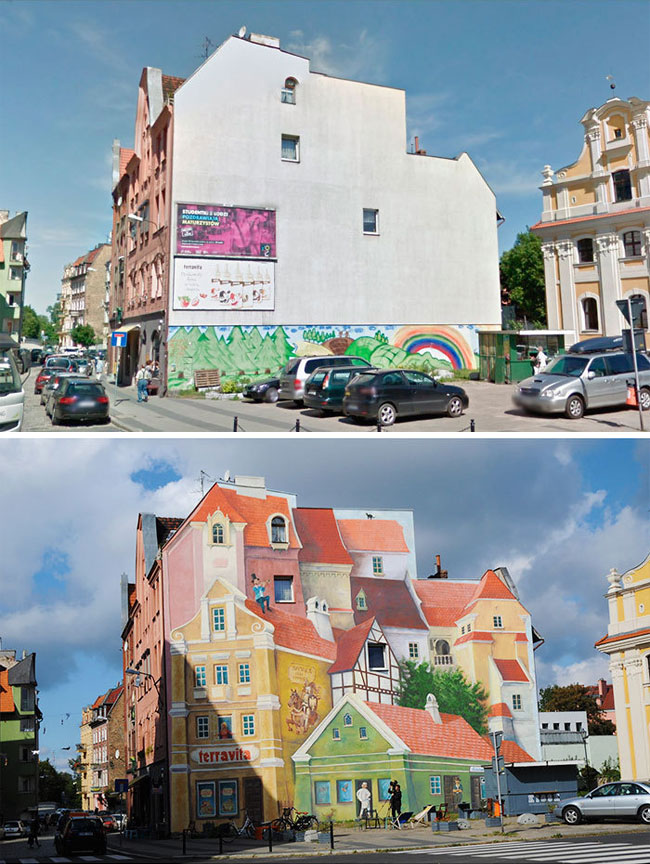 Waldemar Wylegalski
The side of one building illustrated to look like several colorful buildings. 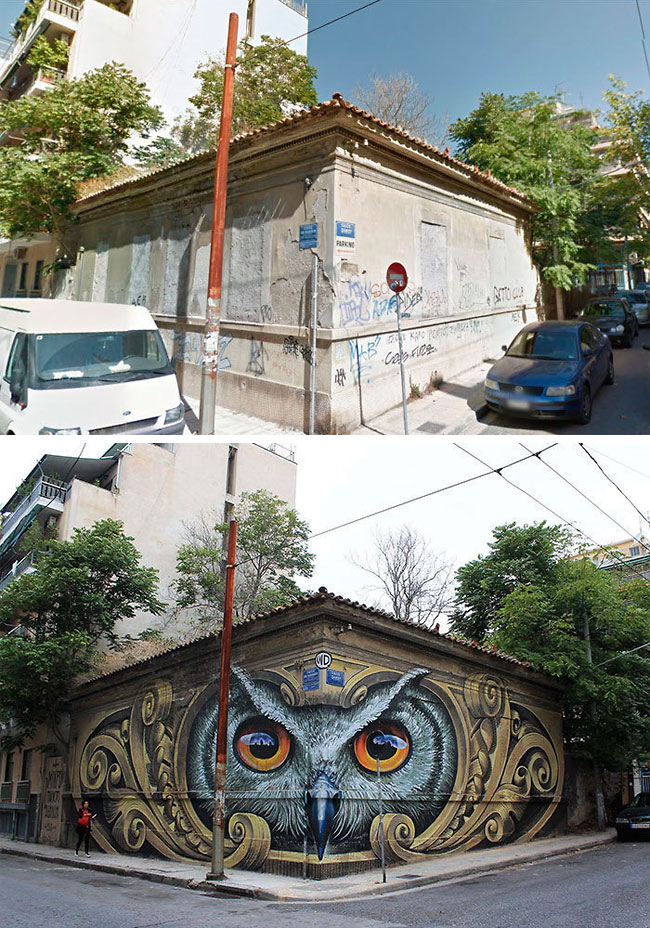 Reddit
A building’s corner with some graffiti markings transformed into a beautiful mural of an owl with haunting eyes.

Bold Line Drawings Layered On Top Of Deconstructed Images Of Fruit, Flowers, And Animals In Tattoos By Mattia Mambo
Bare Gruesome Fangs And More With Japanese Designer’s Awesome Creature Masks
French Artist Duo Uses Colorful Paper To Bring Scenes From Famous Literary Works To Life
The Magic Unicorn Hood That Has No Special Powers At All But Looks Amazing
This Russian Artist Dresses Herself And Her Models In Surreal And Weird Costumes Made Out Of Vegetables, Fruits And Plants
Skilled Ceramicist Katharine Morling Lifts Her Paper Drawings From The Page
Artist Re-Reading Damaged Images Of The Virgin Mary Transforming Them Into Icon Characters Of Pop Culture
Microsoft Will Send This Awesome Looking Windows 95 Sweater To Some Lucky Fans
Forrest Gump Rear Wiper Decal
Nike Created A Limited-Edition "Stranger Things" Sneakers Made With Fabric That Can Be Burned Away To Reveal Hidden Details
2007 ‒ 2022 by Design You Trust. Proudly hosted by WebHostingBuzz.
Privacy Policy · Terms of Service · Content Removal Policy ❤️ 🇺🇦