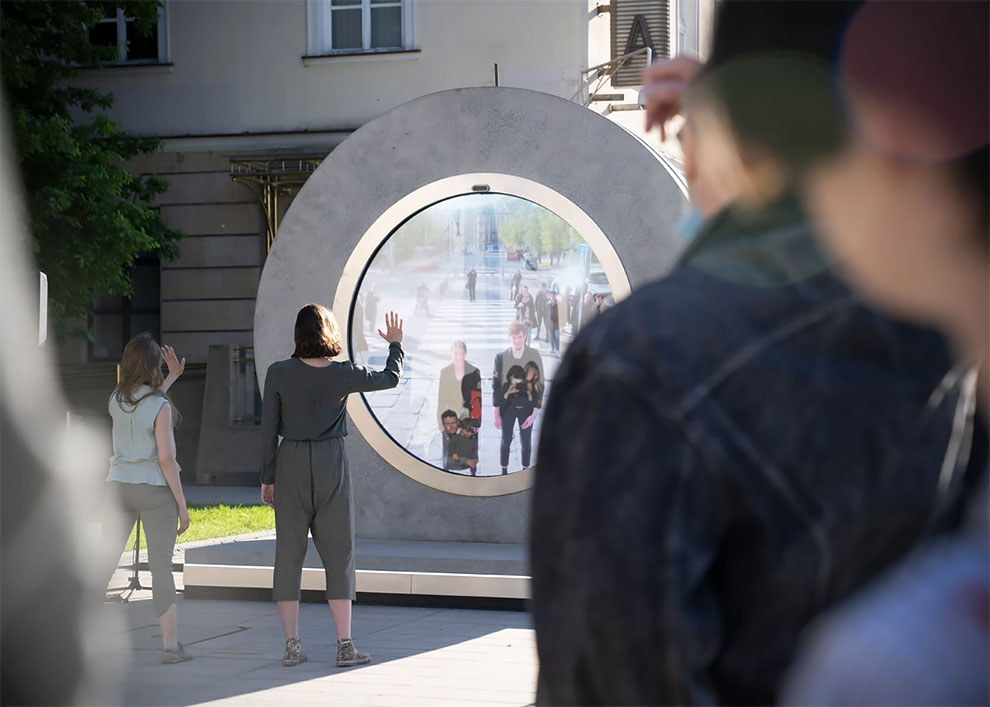 On the 26th of May Lithuania’s capital, Vilnius and Lublin in Poland became the first two cities to connect through PORTAL. This interactive installation, is a new wave community accelerator, aiming to bring people of different cultures together and encouraging them to rethink the feeling of unity. 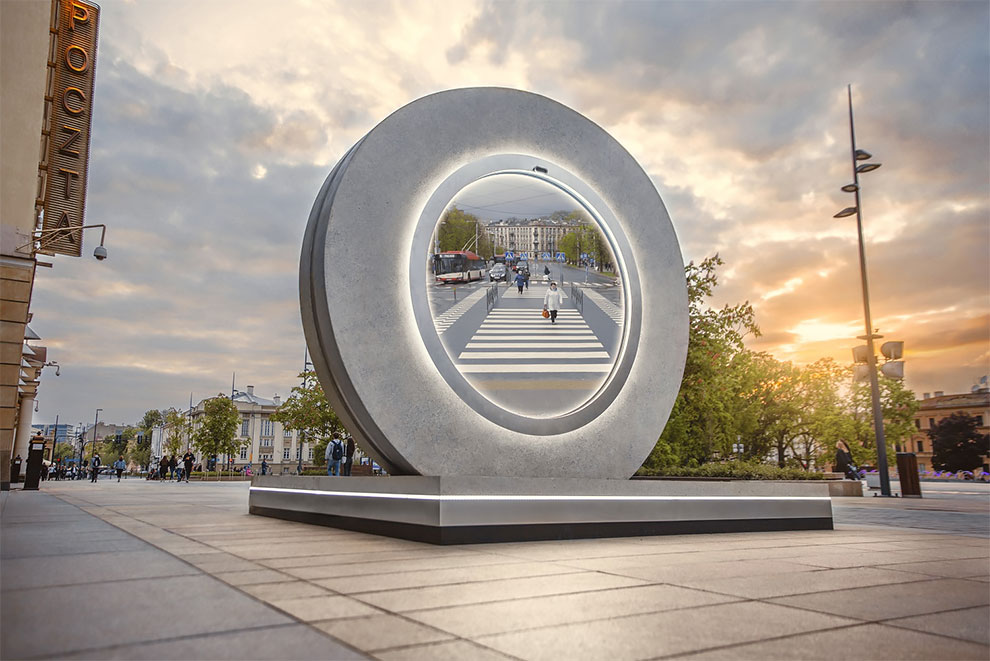 For the first time, different countries, cities and its’ people have such a way to connect in real-time. PORTAL – the installation broadcasting Lublin to Vilnius and vice versa – is an invitation to get to know yourself better, to experience other city, and to embrace the world surrounding you. PORTAL brings a wish for unity, especially in times like these when we are separated by various challenges and troubles disturbing our world recently. 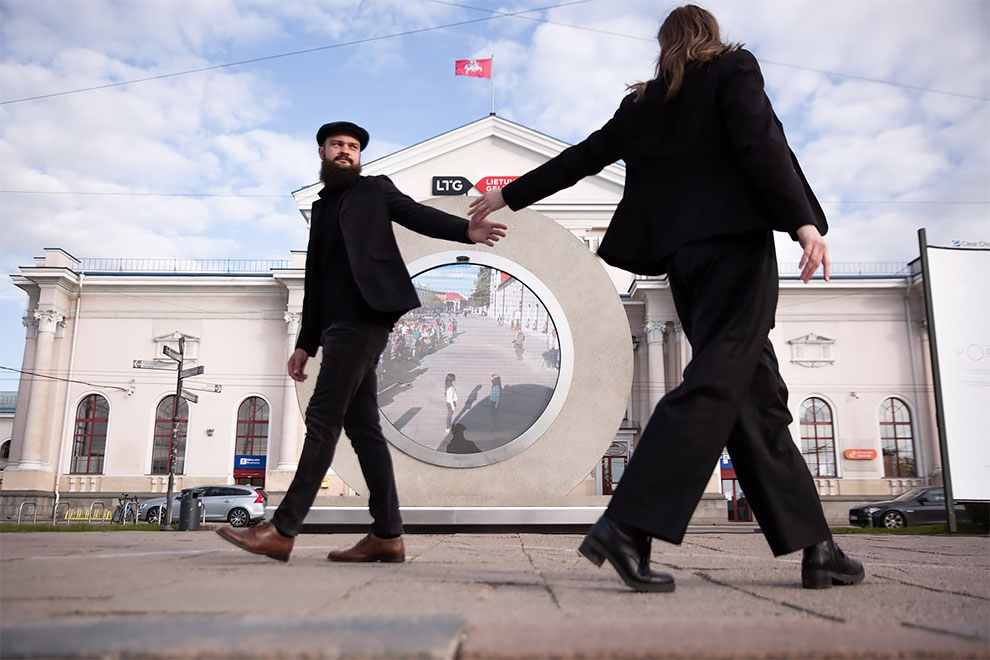 As the authors and the initiators of the project, Vilnius-based Benediktas Gylys Foundation say, it’s time to transcend the sense of separation and to become the pioneers of a united planet.

“Humanity is facing a lot of problems, be it social polarization, climate change, or economic issues. Though if we look closely, it’s not a lack of brilliant scientists, activists or leaders, knowledge or technology that cause the fragmentation of humanity. It’s tribalism, lack of empathy, and a secluded perception of the world, which is often limited to our national borders.” 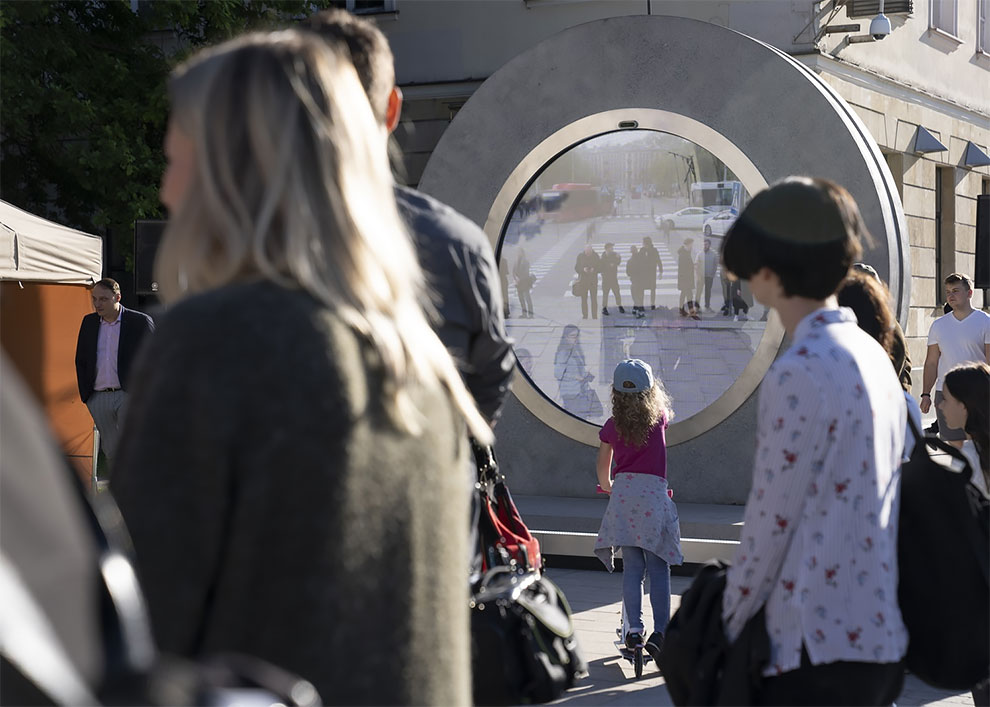 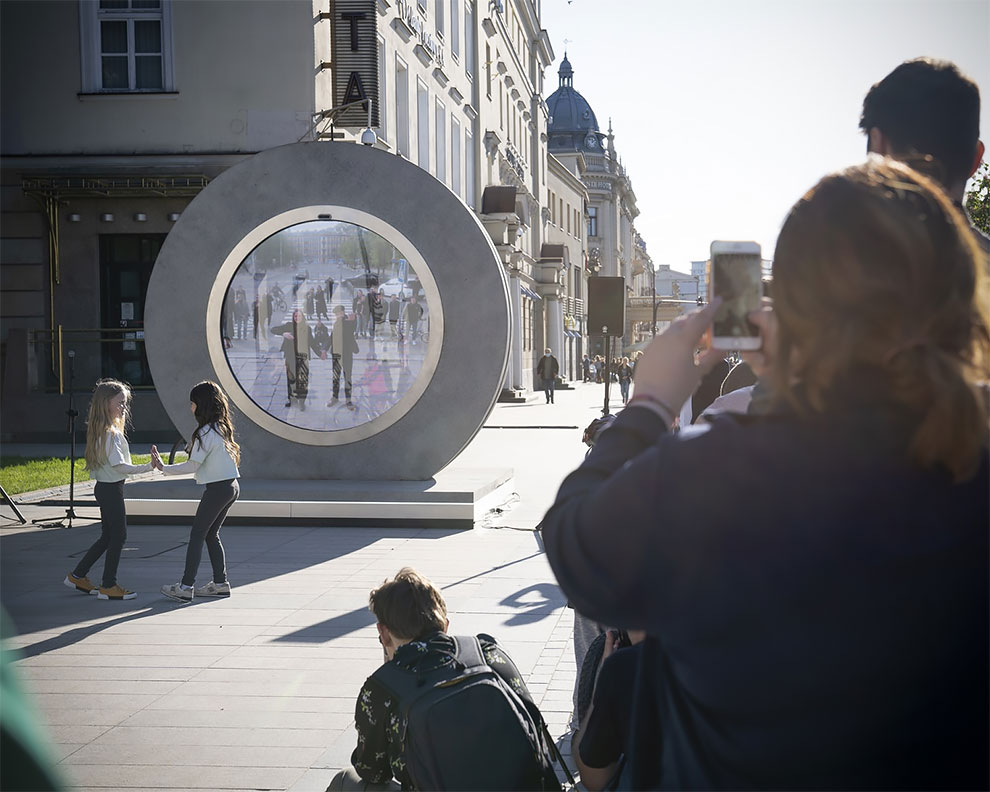 It took 5 years for the team of the project to finally arrive at the first destination of PORTAL and they are extremely thankful to Lublin for bravery of becoming the first partner city and also the pioneer of unity. 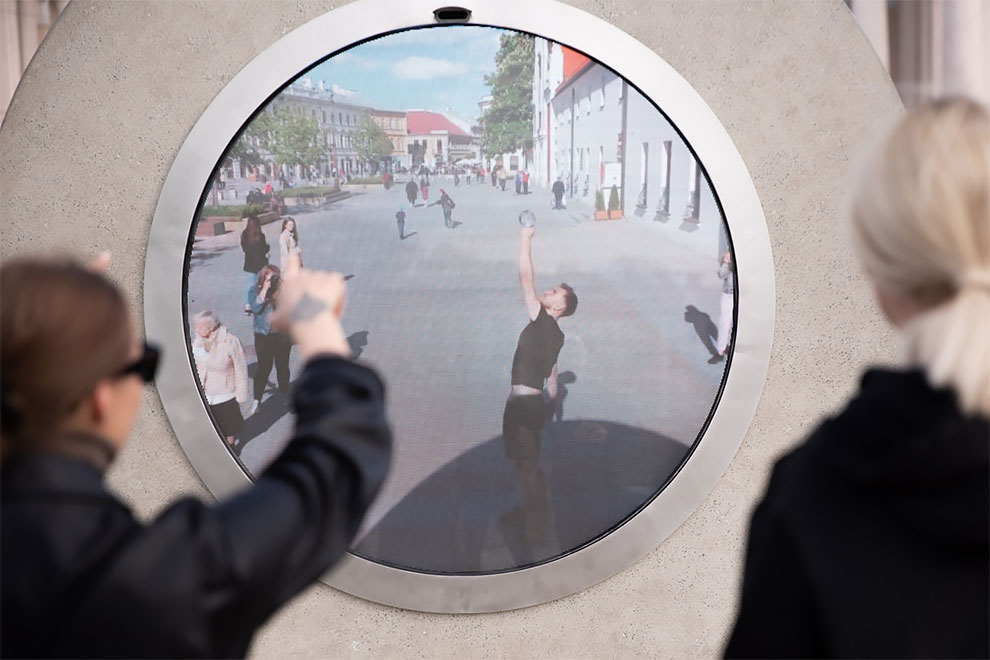 Vilnius Gediminas Technical University (VILNIUS TECH), the technical heart of the project, chose the circle, a well-known and recognized sci-fi symbol for this interactive ‘bridge‘. Resembling the wheel of time, PORTAL allows a person to ‘travel‘ and experience reality on the other side of the screen. The form, minimal design, and aesthetics of the installation shape the image of a future city. 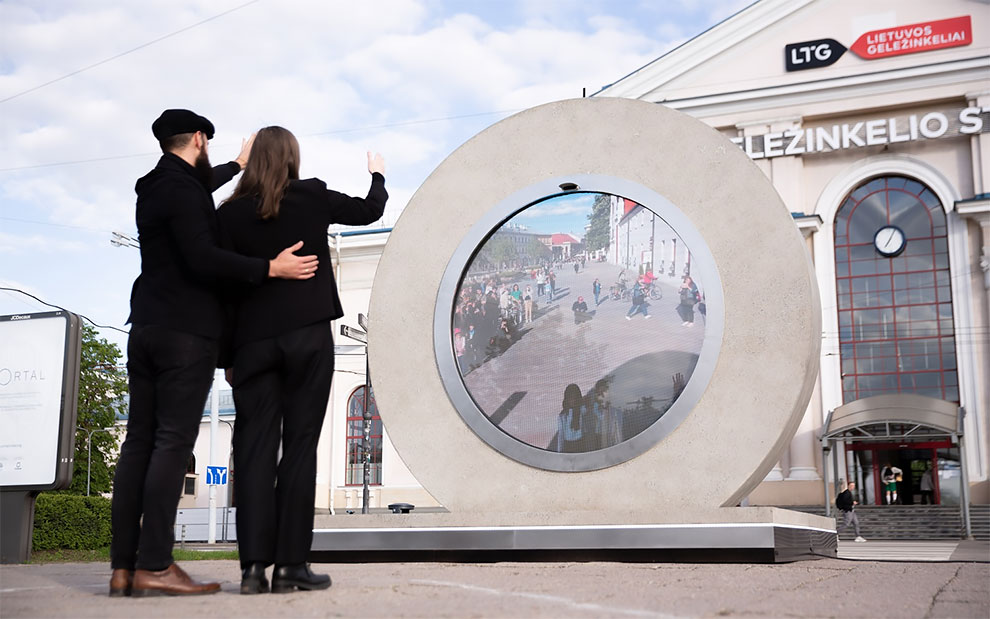 “The PORTAL from the very beginning was an impressive and exciting project. From the initial idea to the creation of an interactive bridge connecting cities, it was a complex task that needed different knowledge and technologies. From design, 3D modeling to digital content development and logistic challenges – a project like this requires a broad and multifunctional team. When diverse people succeed in working together and reach the synchrony – then such meaningful projects are born. And this is just an another example of what the united people can achieve”, says Adas Meskenas, the director of VILNIUS TECH Creativity and innovation centre ”LinkMenų fabrikas”. 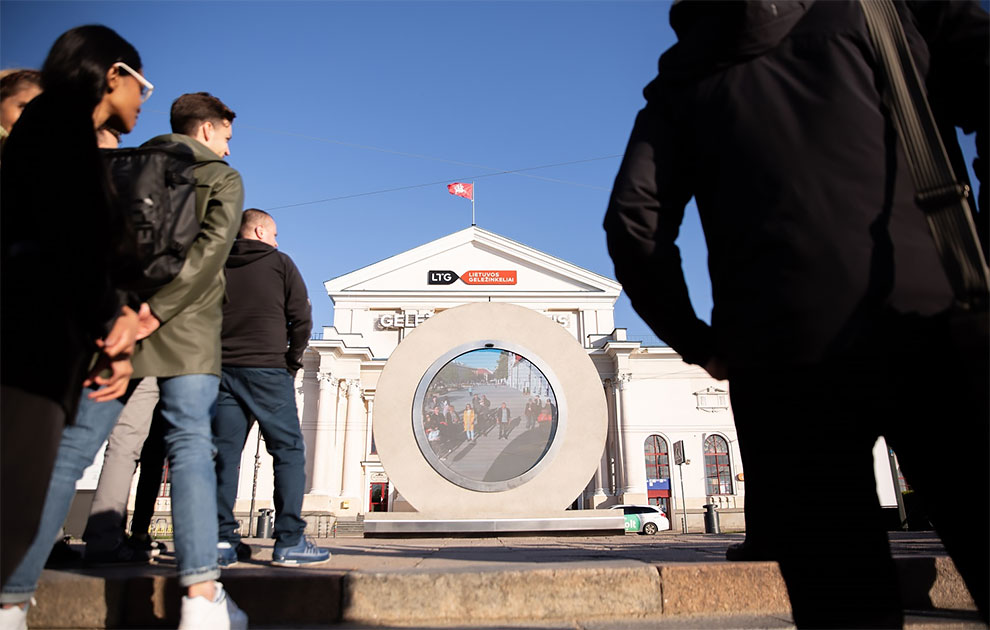 The project is not a simple one-timer, the organizers plan to connect the world by dozens of PORTALS in the future. The aim is to involve communities and encourage a public movement that would create social experiments, unexpected reactions, and most important – the unity of different cities and its‘ people in the long run. 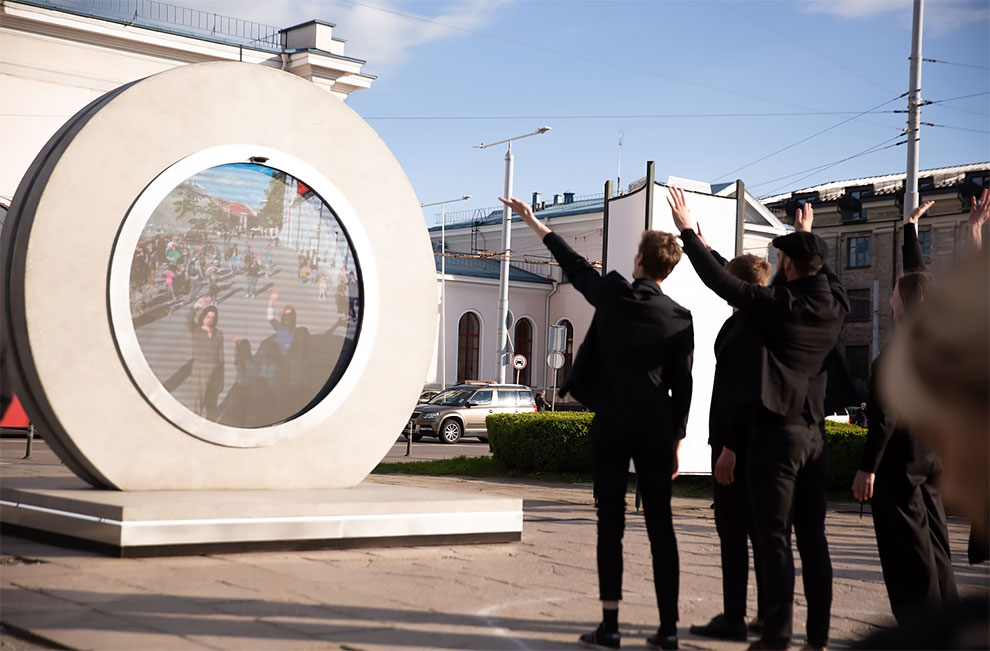 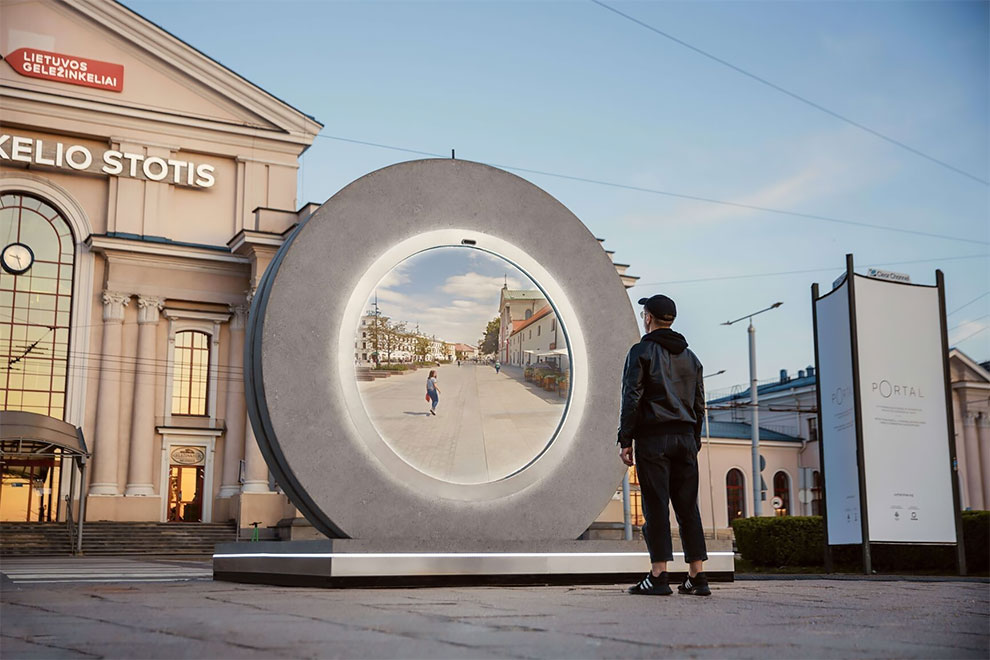 Speed Of Light
Astonishing Artificial Limbs Created By Scott Summit
Double: Wheels for your iPad
Chinese Welder Spends A Year Building Life-size Transformers Model For His Lucky Son
Artist Constructs Impressive Robot Costumes And Wears Them On The Streets Of New York
Midjourney AI Can Now Conjoin 2 Photos, And Here Are Some Of The Test Results Shared By A Telegram User
HP Brand Re-Design by Moving Brands
New Network on the Streets of London Broadcasts News to City Workers via Recycling Bins
Baby Car Seats From the Mid-20th Century Moms Wouldn't Buy Today
Artist Embeds Giant Neon Orange Monolith Into Coachella Valley's Desert Landscape
Wifi Dowsing Rod
Incredible Photos Of Two Roman Ships Which Were Recovered After 2,000 Years In 1929 And Lost Again During WWII
Californian Inventor Spends Millions Creating One-Off Camper Van To Take His 4YO Daughter Around The World
Back When the Rotor Rides Were Fun and Dangerous!
The Lexus Hoverboard In Photos
Japanese Actress Akiko Wakabayashi Posing With the Toyota 2000GT as Featured in "You Only Live Twice", 1967
Cool Retro Photos Capture People With Their Station Wagons From Between The 1950s And ’70s
Back In 1980, Citröen Had A Somewhat Amusing Idea Of The Future
The 1980 Citroën Karin Reimagines The Car As Futuristic Sci-Fi Masterpiece
Dutch Engineering Student Created Incredible Exoskeletal Mechanical Dinosaur Costume
Google Art Project Launched at the Israel Museum in Jerusalem
A Multimedia Installation about Global Warming's Effect
1969 Buick Century Cruiser: The Concept Car That Believed You Only Live Twice
The Nano-Falcon
broadcast, installation, lithuania, portal, video, vr