The Story Behind the Photographs of Stevie Nicks With Veils on the Roof of Her House in Venice Beach, 1981 – Design You Trust
≡
d
Photo
Architecture
Inspirations
Design
Tech
Animals
Travel
Hosting
Facebook
Photography

The Story Behind the Photographs of Stevie Nicks With Veils on the Roof of Her House in Venice Beach, 1981 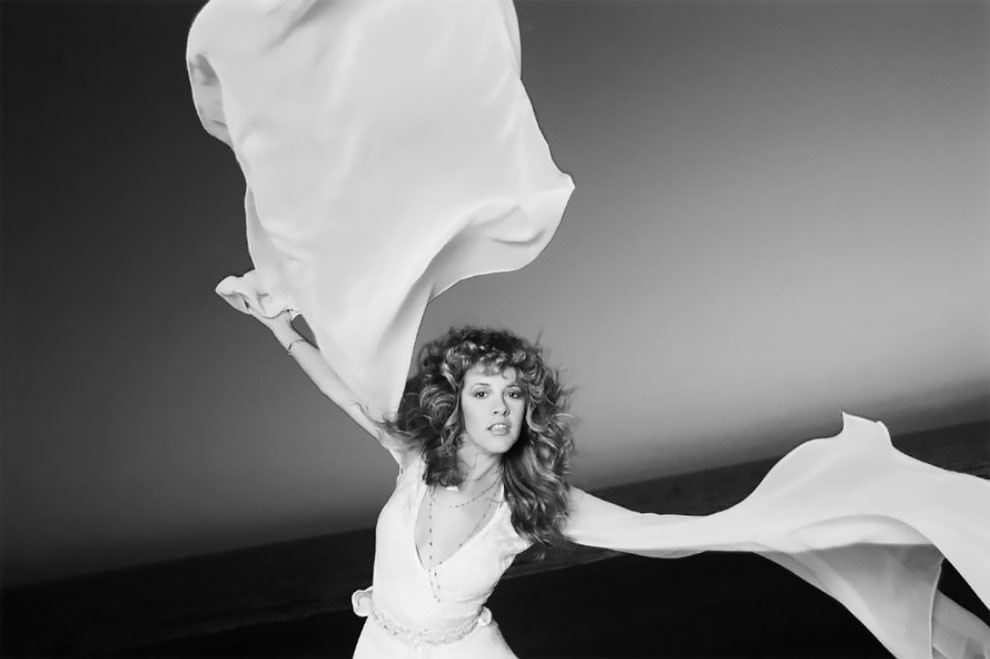 Stevie Nicks from Fleetwood Mac stands in the ocean breeze with her trademark flowy dress sleeves rippling dramatically over her head. The photographs were taken by Neal Preston on the roof of Stevie’s condo in Venice Beach, CA during a shoot for People Magazine. 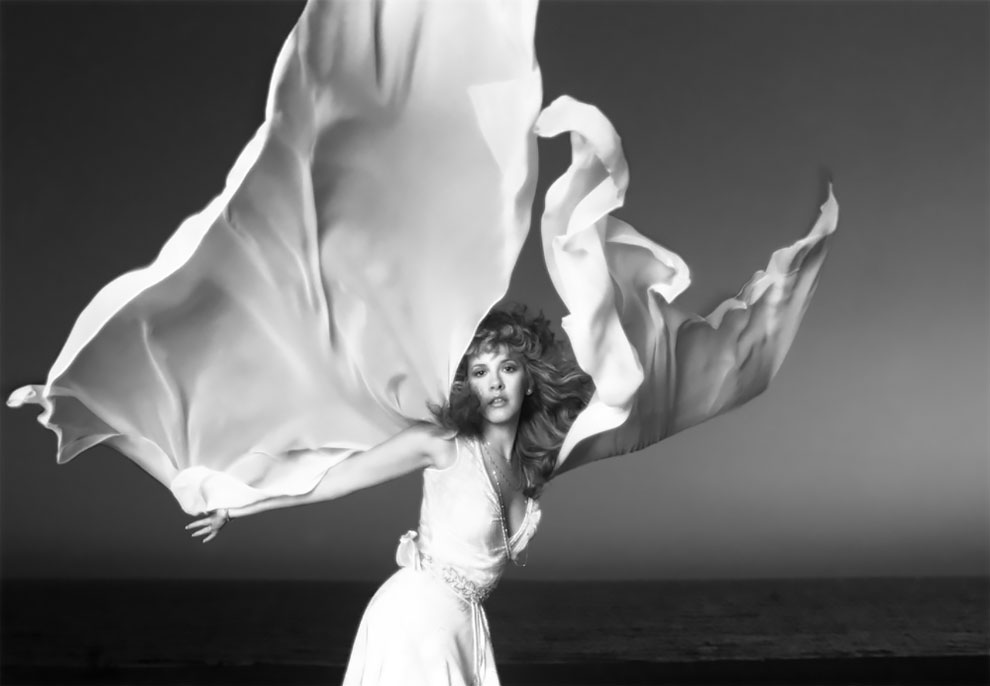 According to Preston, the wind was so strong, one of his assistants literally had to hold Stevie down by her boots.

“She was living in Venice, California, at the time and she had a condo on the top floor of a six-story building right on the sand in Venice Beach and we had a great shoot, she couldn’t have been easier. But I still wanted that one last killer photograph and I said almost at the same time as she said: ‘Why don’t we go up on the roof and shoot as the sun is going down?’ I thought it was a fantastic idea. 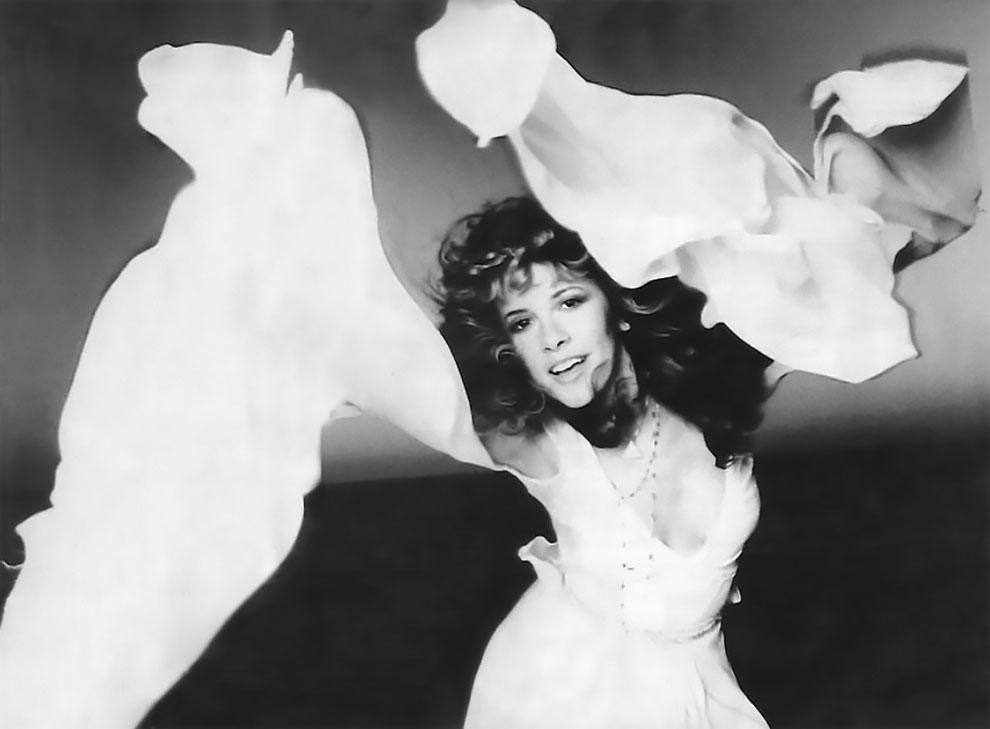 “She had put on this white outfit with long sleeves of fabric that really caught the wind like a sail on a sailboat. The second I put the camera to my eye the wind starts kicking up. She is posing and the sleeves are going all over the place, and I realize about three frames in that the wind is going to be blowing so hard that one gust and she could be blown right off the side of the building, six stories down, which would have ruined Time Life’s insurance department’s day. 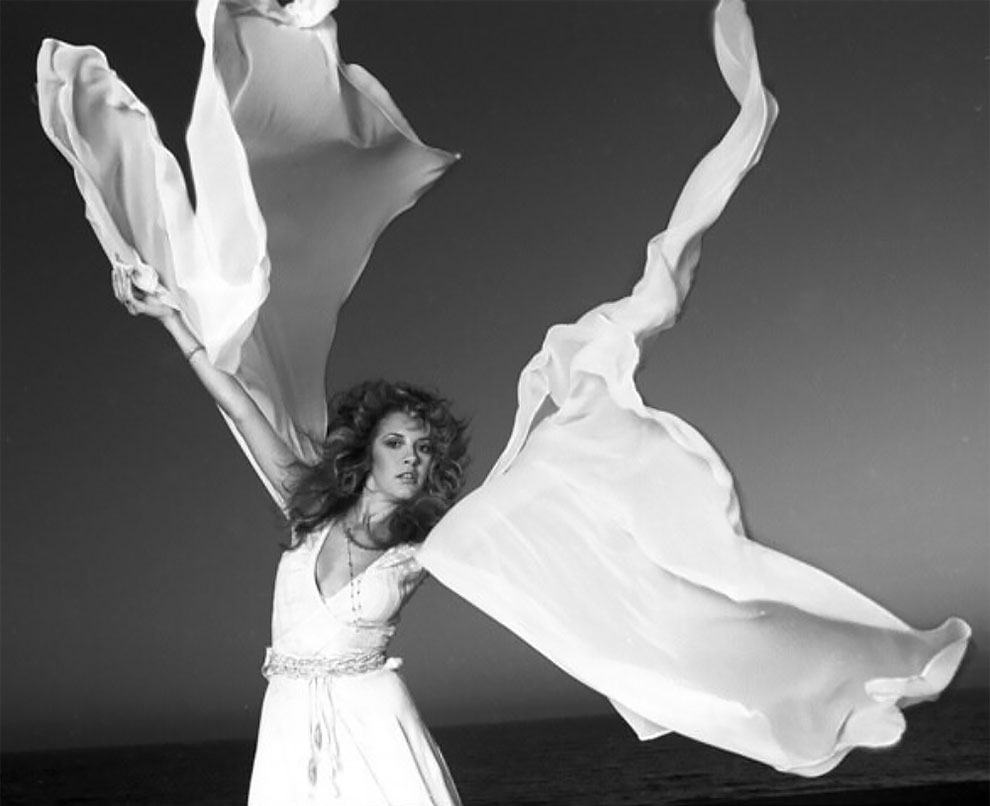 “There was only one thing to do because we were getting great photos and the sun waits for no man and it was going down. So I made an assistant of mine lie on his stomach out of frame and I said ‘You hold on to that white boot — you do not let go.’ And that is what he did. She stayed in one place and we got great pictures. But that is why you don’t see her boots in the pictures. There could be no full-length shot.”

Preston grew up in Queens, New York. He went to Forest Hills High, the same school that spawned The Ramones. He was already photographing bands and set to go to the Philadelphia College of Art when he realized the career he had chosen didn’t need a degree. 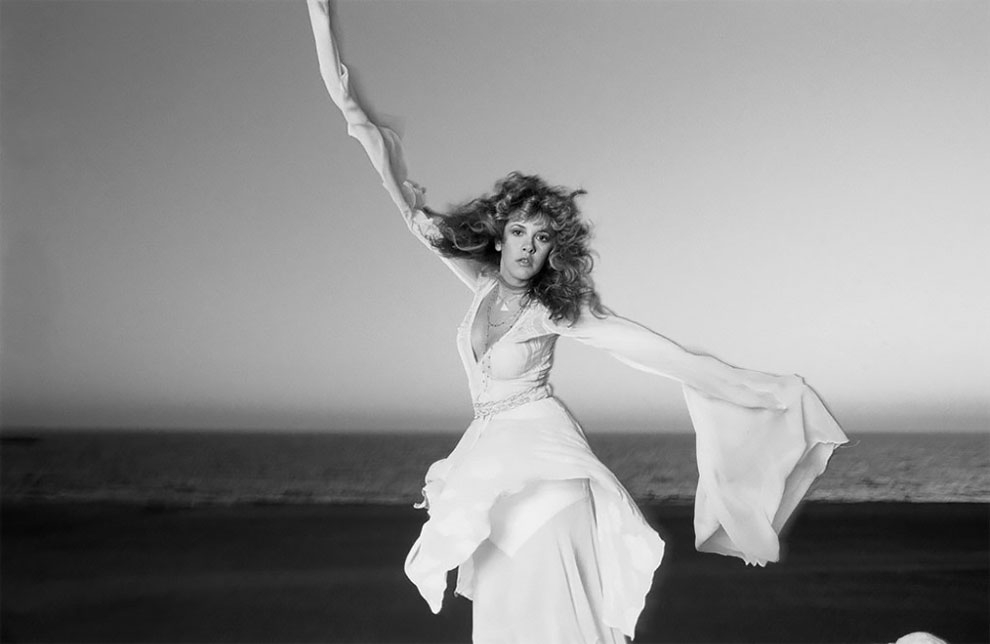 “The day was absolutely intoxicating, and the next afternoon a bouquet of flowers arrived at my house with a note thanking me for a ‘magical shoot.’ She’s a friend for life and one of the most creative people I’ve ever met.” 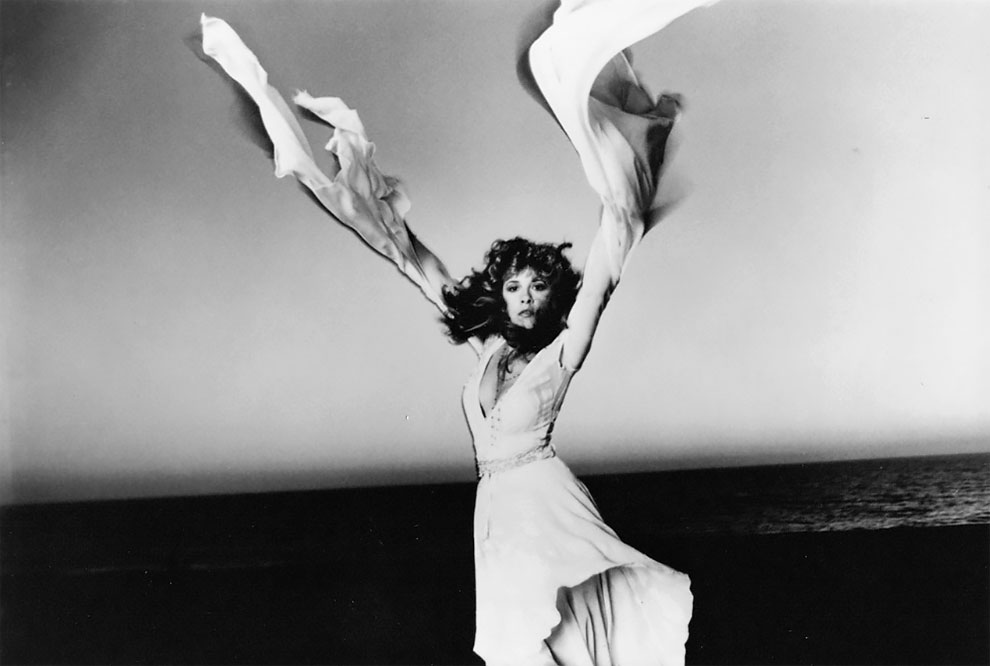 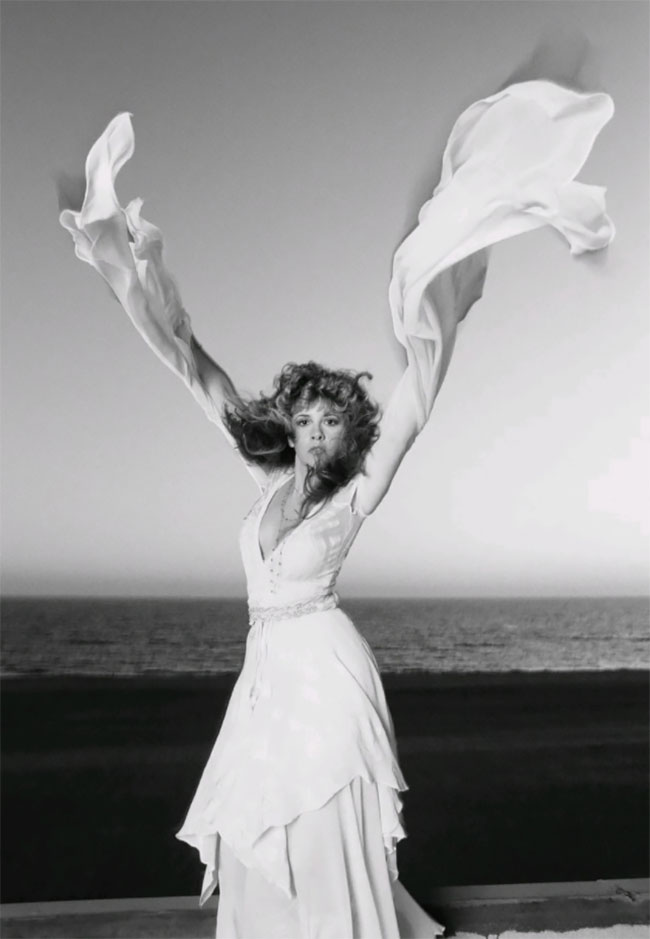 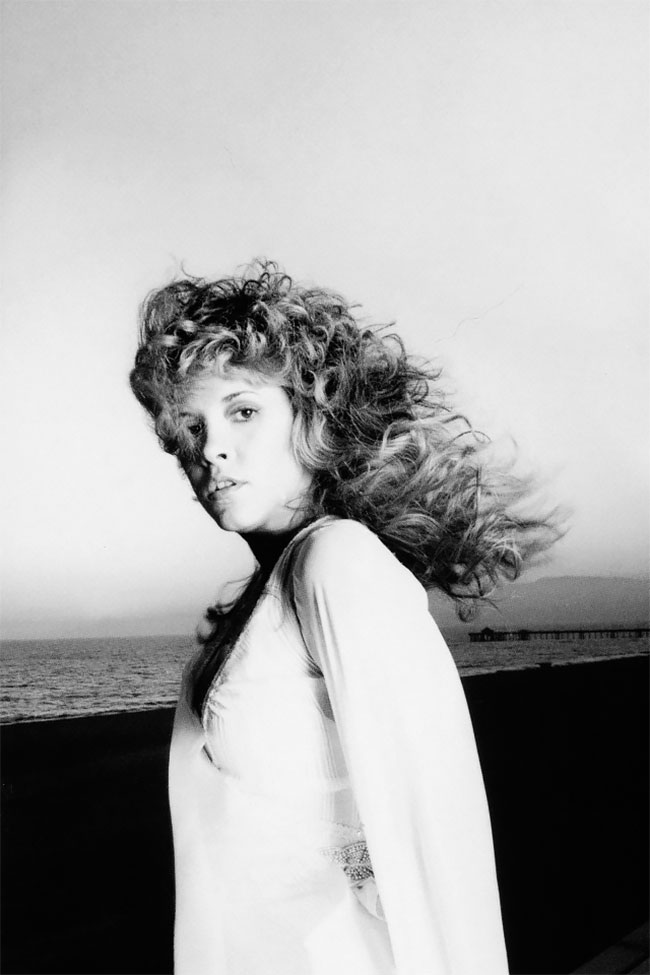 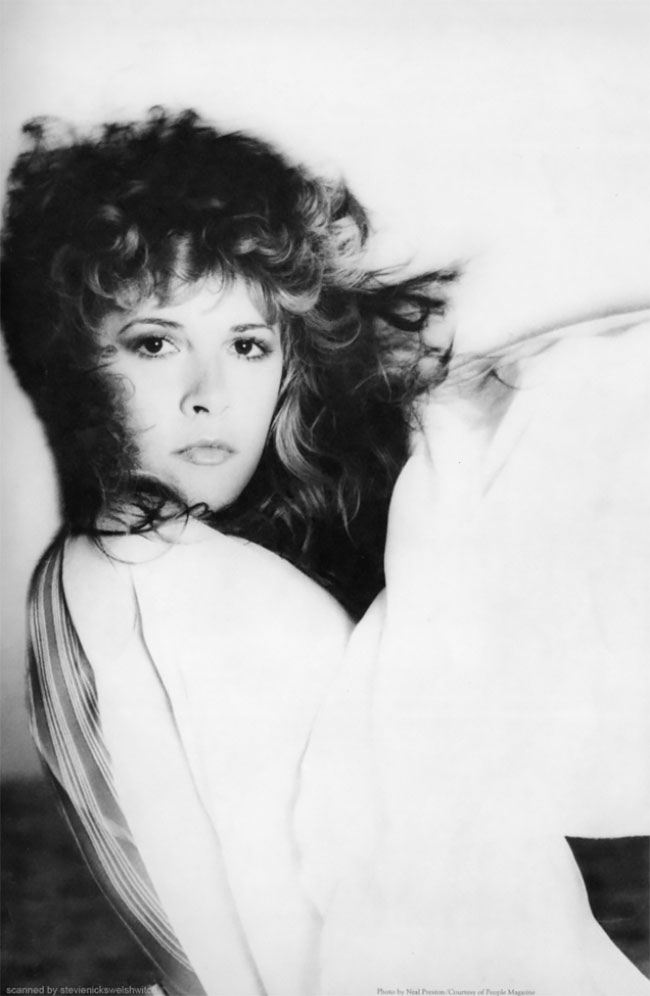 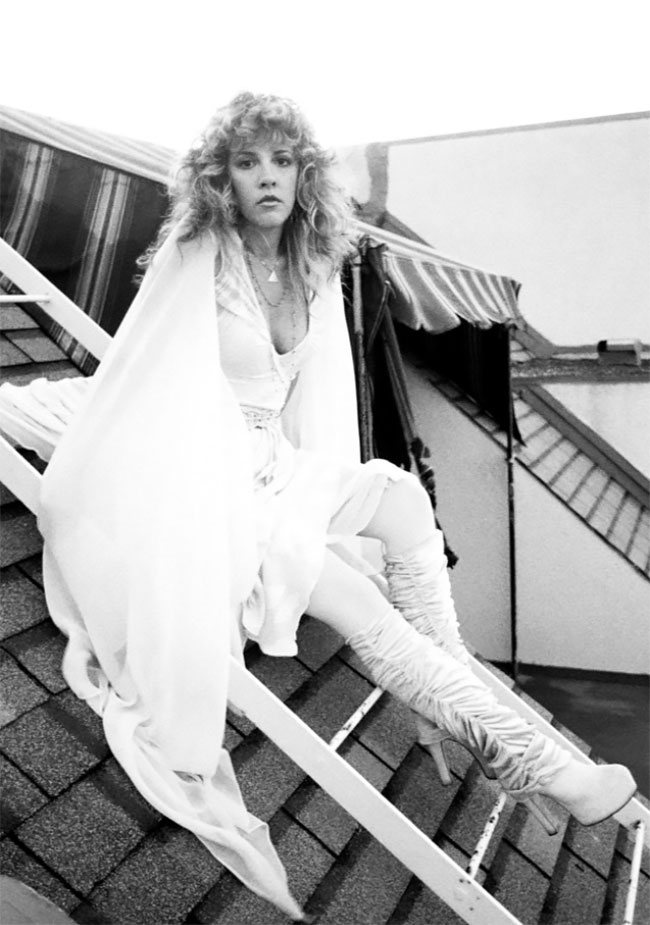 Spectacular Entrants and Winners of The Festival of Ethical Photography 2022
Rare Photos of A Young and Then Still-Unknown Marylin Monroe Hiking in The Woods, 1950
Russian Photographer Captures Young Ballerina Whose Dogs Are Equally As In To Ballet
Stylish New Yorkers Pose For Portraits With Their Bikes
Delahaye Type 165: The Most Beautiful French Car Of The 1930s
Artist Finds Solace In Dreamlike Photography After Mother Passes Away
Beautiful Portraits Of Rare And Endangered Birds That Look Simply Stunning
Stunning Photos Of The Pulitzer Prize-Winning Associated Press Photographer Robert Bukaty
Hilarious Winners Of The 2016 Comedy Wildlife Photography Awards
Amazing Vintage Photographs of Harold Lloyd’s Magnificent (Year-Round!) Christmas Tree
David Bowie And His Ex-Wife Angie Taking Their Then 3-Week-Old Baby Zowie Out For A Walk In 1971
Photo of the Day: Steve Jobs Giving His Middle Finger To IBM, 1983
Couple Recreates “Alien” Birth Scene For Maternity Photo Shoot
For 32 Years, Artist Took Photos Of The Same Couples To Show The Effects Of Time
See the Winners in Picture Wild Montana 2020 Photo Contest
Kissing On A Rainy Beach: Bruce Davidson’s Photographs Of 1960s Britain
Amazing Hand Painting Illusions By Ray Massey And Annie Ralli
Vintage Photographs of Women Flaunting the Inflatable Bras to Look Like Marilyn Monroe in 1952
A 78ft 'Coronavirus Ogre Castle' was Burned at Shrovetide in Russia, Here Are The Incredible Photos
Amazing Vintage Photographs Documented Inca Culture And Life In Peruvian Andes, Captured By Martin Chambi In The Early 20th Century
"Terminal City": Extraordinary Photos Of Vancouver 1972-1982
Photographer Michael Lee Captures London Like You’ve Never Seen Before
This Is Known To Be The Only Photo Of Van Gogh As An Adult
These Colourised Photographs Show How People Took Shelter in The London Underground in The 1940s
1980s, Fleetwood Mac, music, Neal Preston, retro, Stevie Nicks