Here are the winners of “Wellcome Photography Prize 2021”. Our two winners for 2021 are ‘Untangling’, Jameisha Prescod’s picture of herself knitting to block out her depression during lockdown, and ‘Trans Woman: Between Colour and Voice’, Yoppy Pieter’s series chronicling how the Covid-19 pandemic has made life harder for trans women in Indonesia.

The other category winners show volunteers disinfecting a theatre near the origin of the first Covid-19 outbreak, a man struggling to survive in the aftermath of a cyclone, a fantasy of depression as a sinister, ever-present fish, and a community whose fertile wetlands have turned to desert. 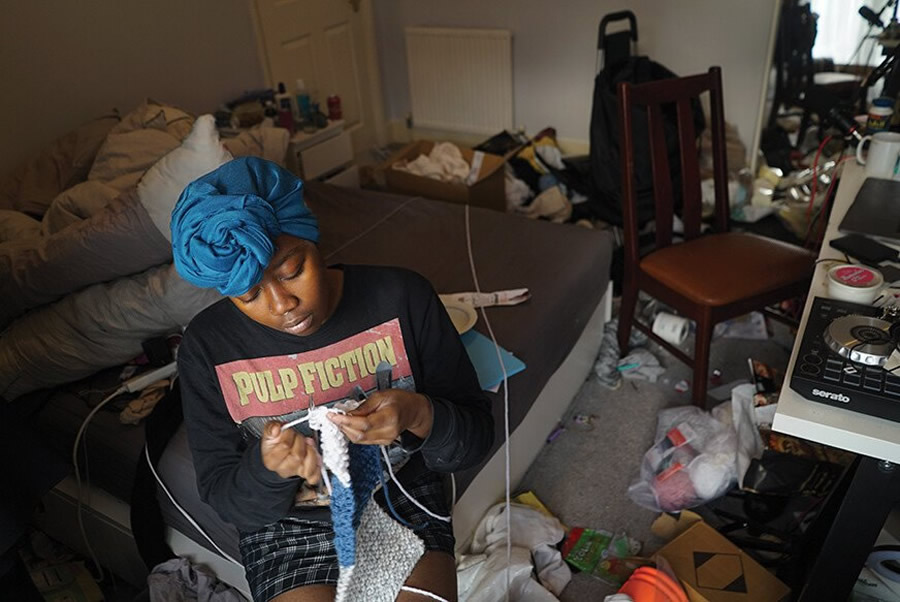 “The isolation of lockdown exacerbated London film maker Jameisha Prescod’s depression, as she spent most of her time in the concentrated chaos of this room. “It’s where I work a full-time job, eat, sleep, catch up with friends and most importantly cry.” Before long, she felt like she was “drowning in the clutter”. For escape, she turned to knitting, which helps to soothe her mind. It may not be a cure, but it does at least put “everything else on pause” for a while.” 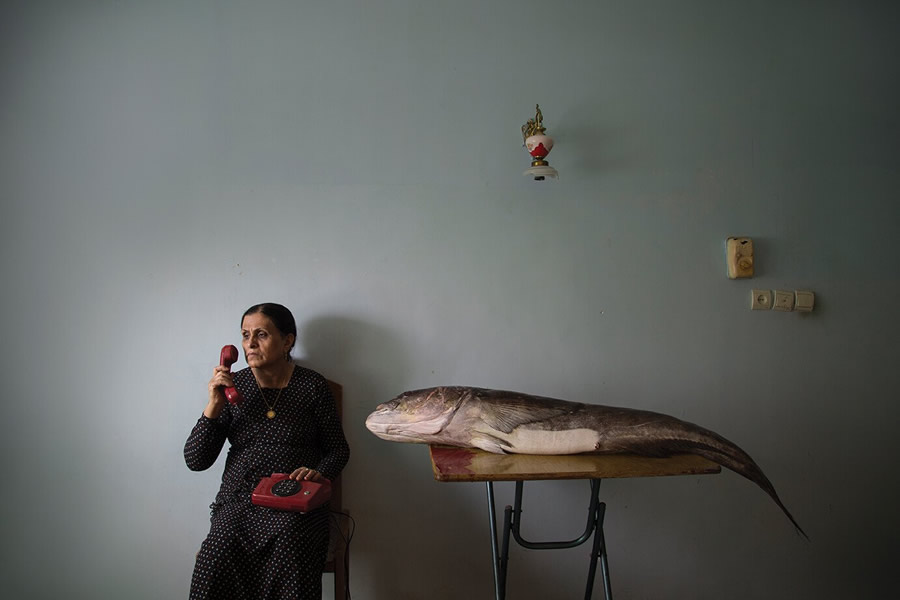 “Inspired by a local Iranian myth, Morteza Niknahad reimagined his mother’s long-standing depression as a fish-like monster inside of her, a constant enemy to struggle against.” 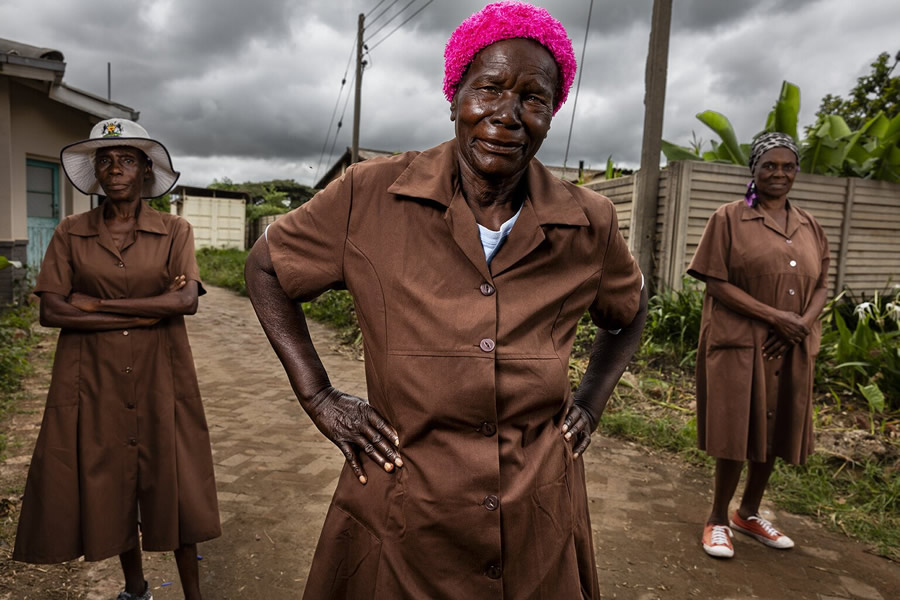 “Through Zimbabwe’s Friendship Bench programme, trained volunteers counsel people with depression and other problems using principles from cognitive behavioural therapy – in the informal setting of a chat on a bench.”

Birds of a Feather Flock Together by Rebekah Williams 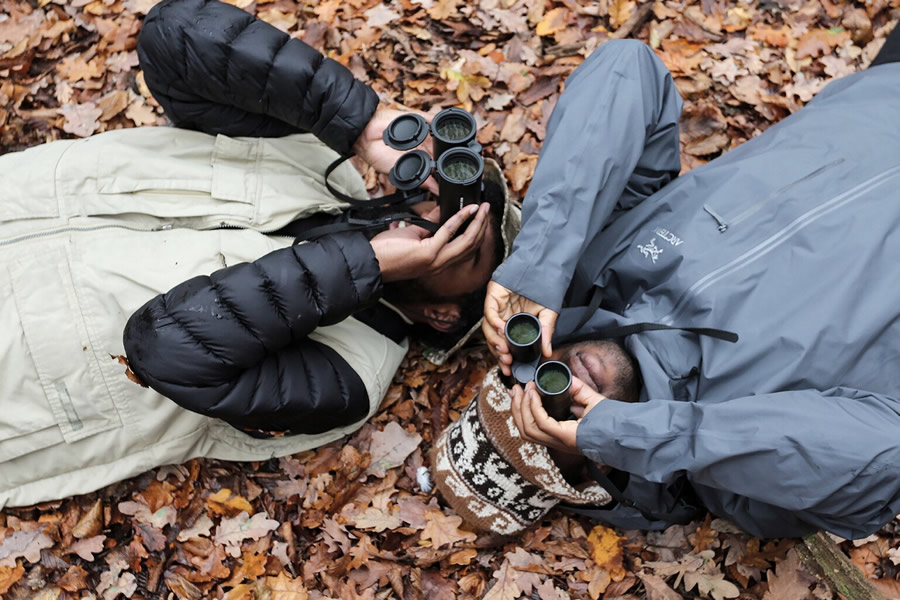 “Spending time in nature can be beneficial for mental health, and Flock Together is a London-based birdwatching club for people of colour, building a community of mutual support.” 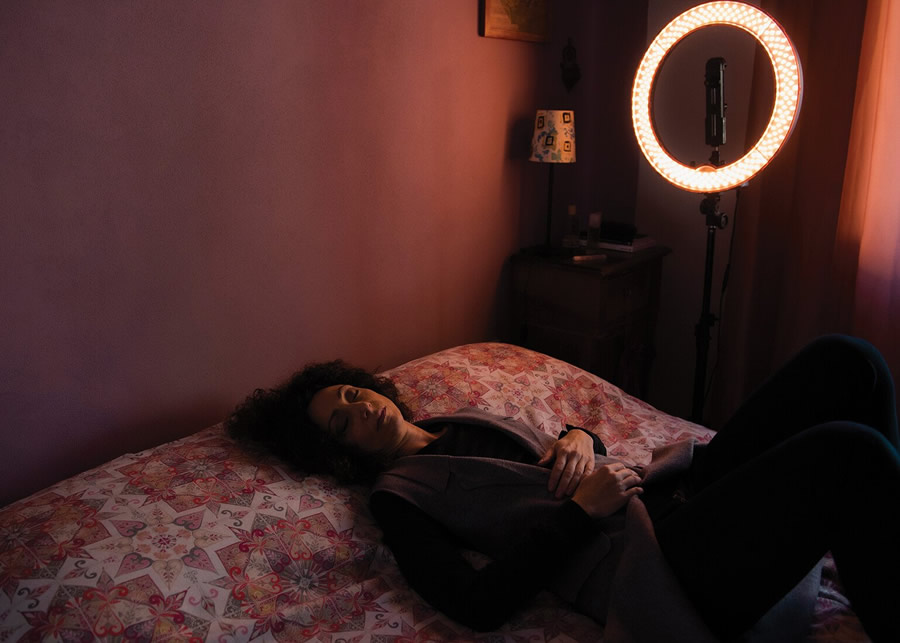 “ASMR artists create videos to induce soothing, tingly sensations (known as ‘autonomous sensory meridian response’) that can help to ease stress and insomnia. Watching or just listening has become a bedtime ritual for a growing online community around the world. Morpheus documents the work of four ASMR artists in Italy.” 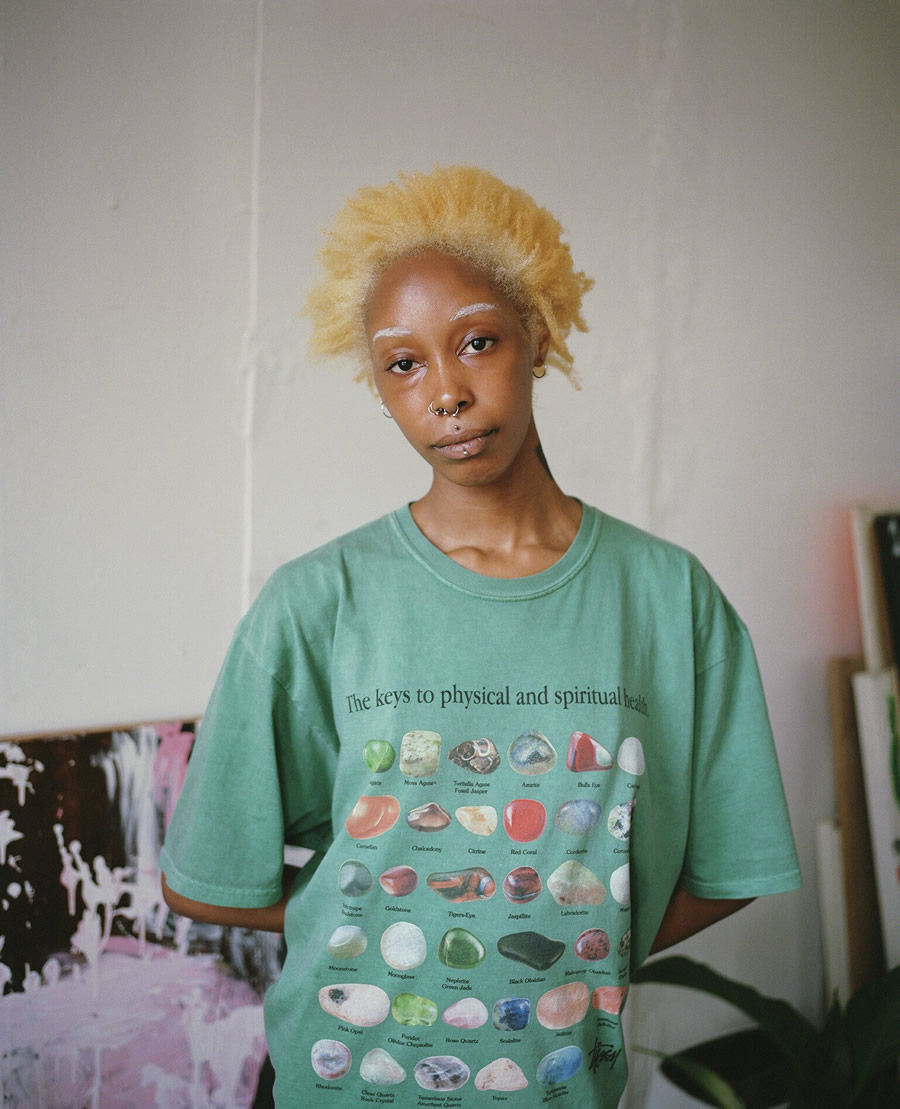 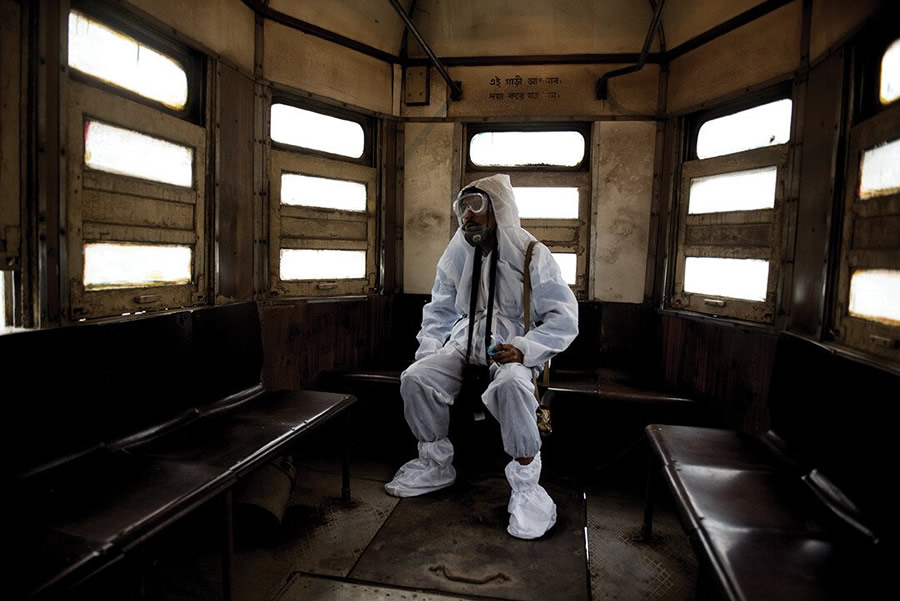 “It’s exhausting. A tram conductor in Kolkata, India, wears protective clothing from head to toe even in the heat of a summer afternoon. This was when restrictions were easing after India’s first Covid-19 lockdown – public transport was running, but staff were advised to suit up like this. We’ve all grown used to saluting the efforts of healthcare workers, but plenty of other people in public-facing jobs have performed gruelling duties too to keep people safe.” 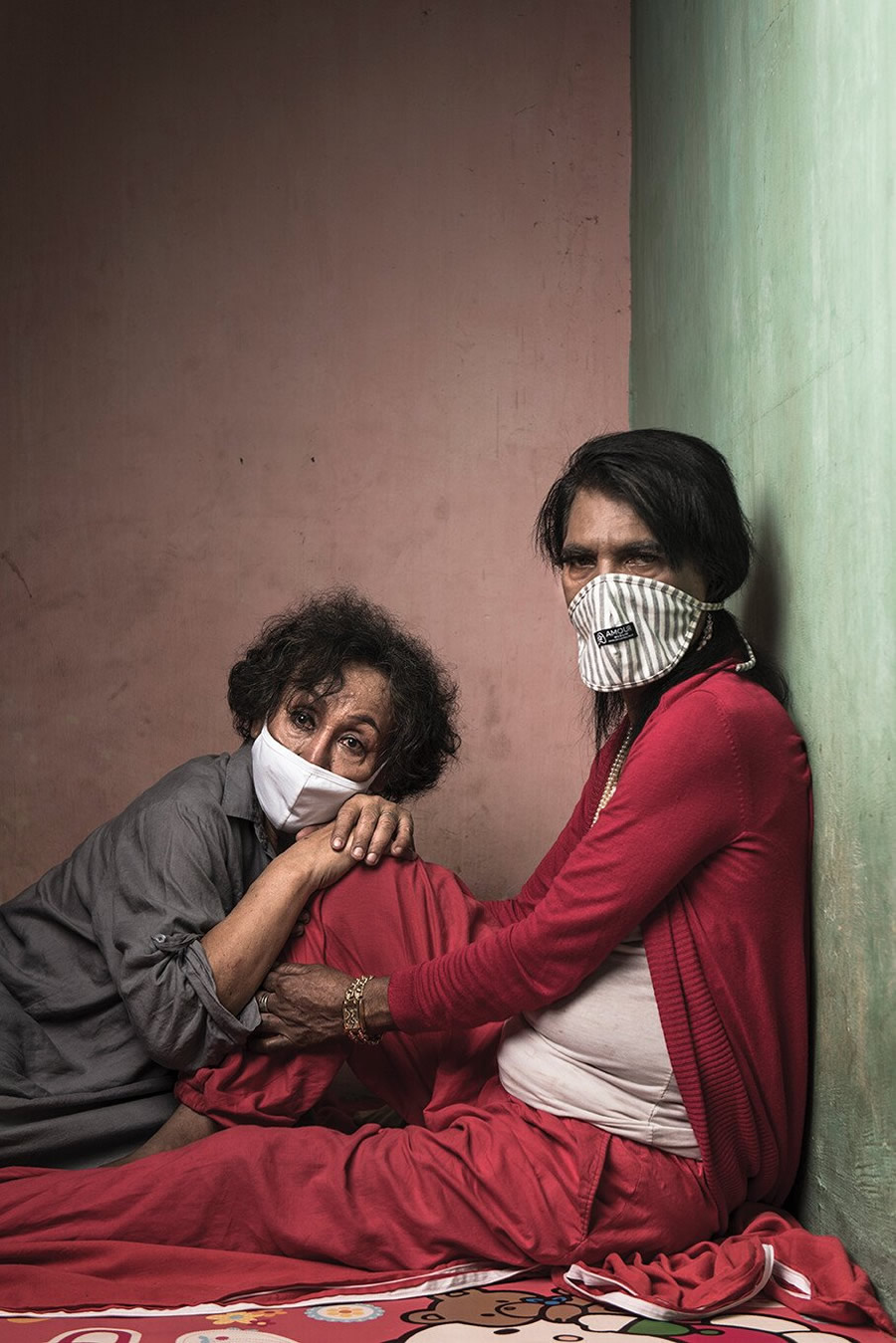 “Trans women in Indonesia face many obstacles in life: it’s hard to get a job, and to access healthcare and other government services. All of these difficulties have been made much harder by Covid-19.”

The Next Pandemic by Hugh Kinsella Cunningham 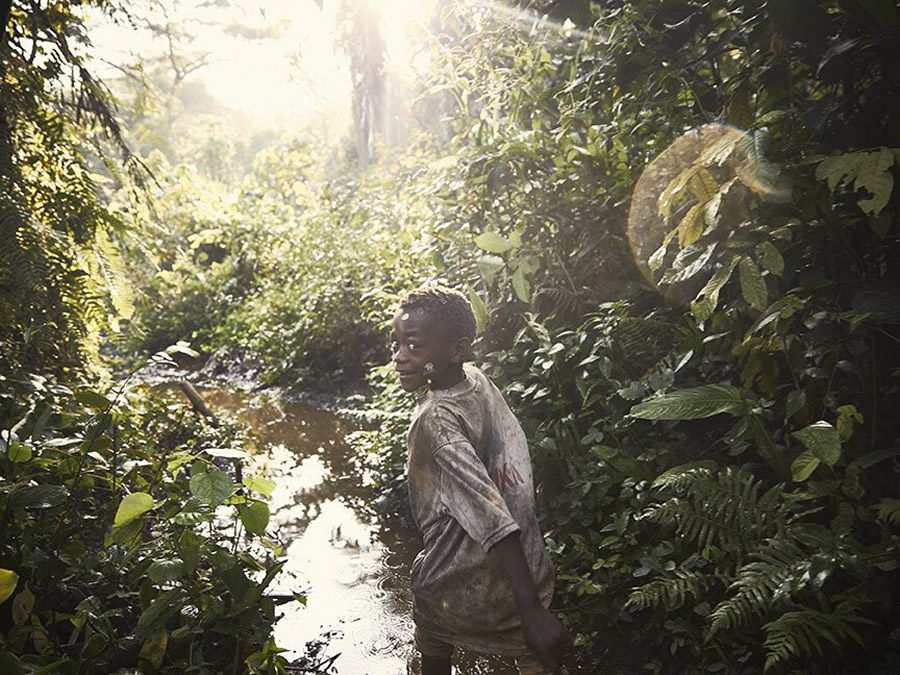 “Deadly new viruses can spread from animals to humans, and areas of rich biodiversity, like the forests of the Democratic Republic of the Congo, have been implicated in the emergence of viruses such as HIV and Ebola. Hugh Kinsella Cunningham investigated in collaboration with writer and public health professional Amelia Goldsmith.” 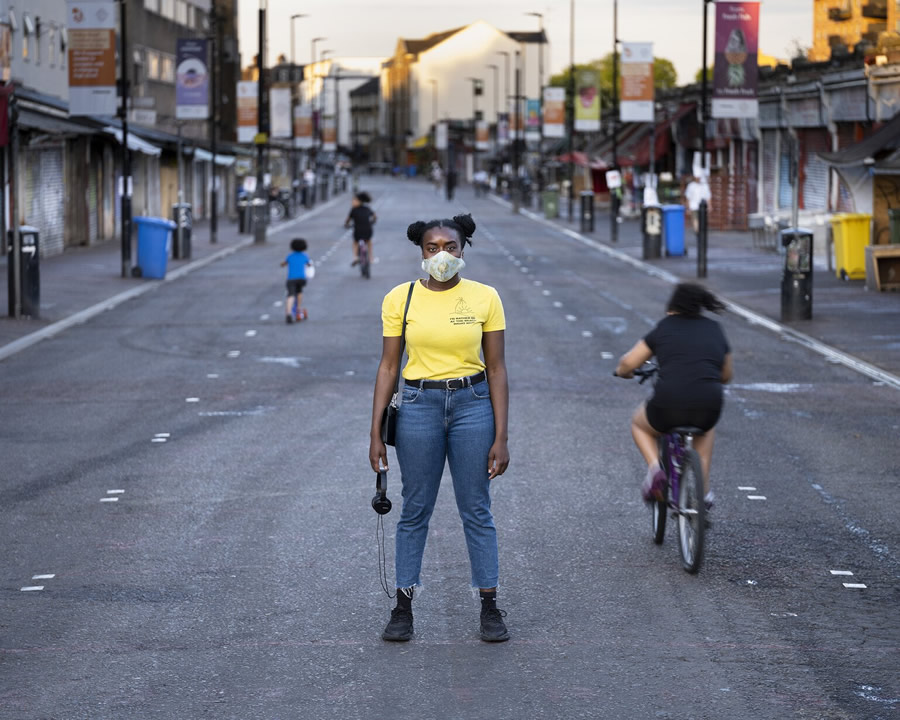 “Portraits taken during the UK’s first lockdown on Ridley Road in Hackney, east London. It’s usually the site of a bustling market, but its hours were restricted and distancing lines were painted on the road.” 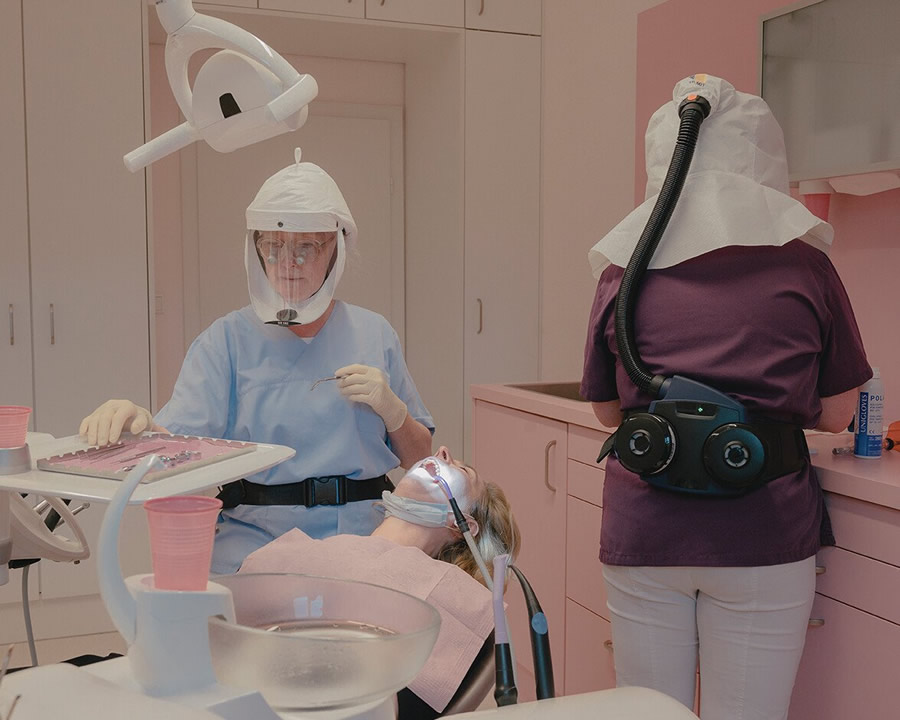 “Covid-19 and lockdowns disrupted almost every aspect of life, challenging people, governments and organisations of every kind to find ways to adapt. Ingmar Björn Nolting travelled through Germany in April 2020 to see what was going on.”

Conflict and Covid-19 in Nagorno-Karabakh by Anastasia Taylor-Lind 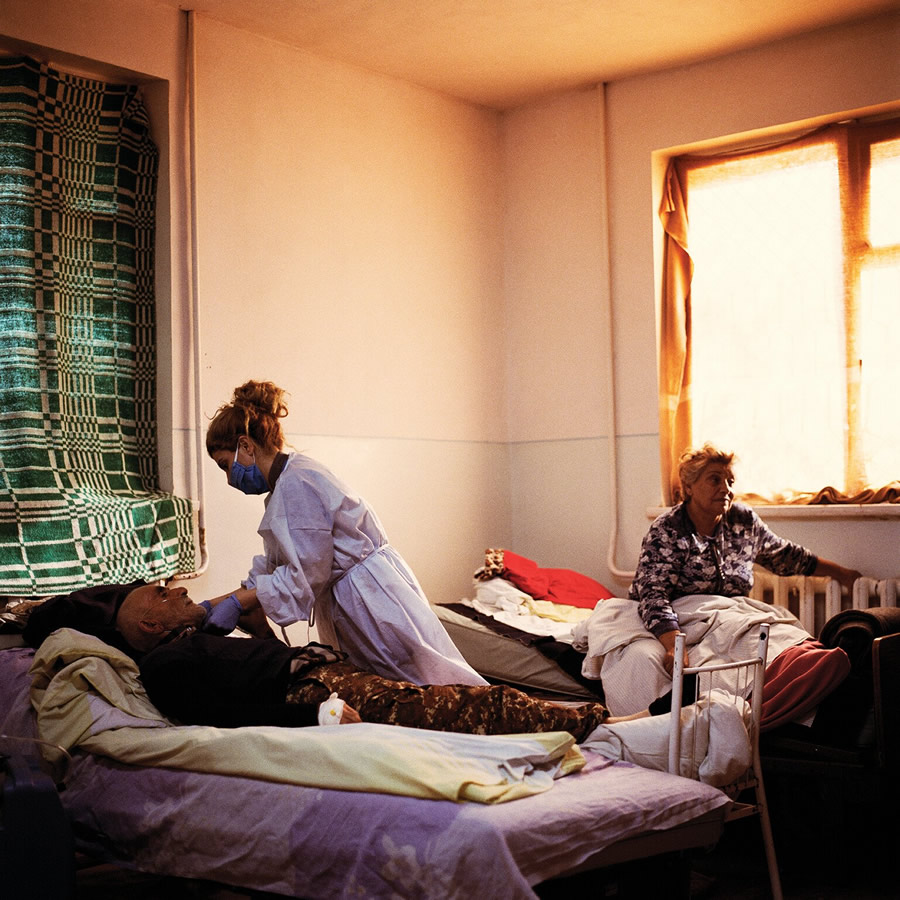 “The war in Nagorno-Karabakh was the first conflict to start during the pandemic, and the overlap of the two crises was deadly. Infections spiralled out of control, caused by the pressure put on healthcare facilities and the mass movement of people in and out of this disputed territory (officially part of Azerbaijan, for years it has operated as a breakaway state backed by Armenia).”

Health in a Heating World (single image): Tears of Drought by Sharwar Apo 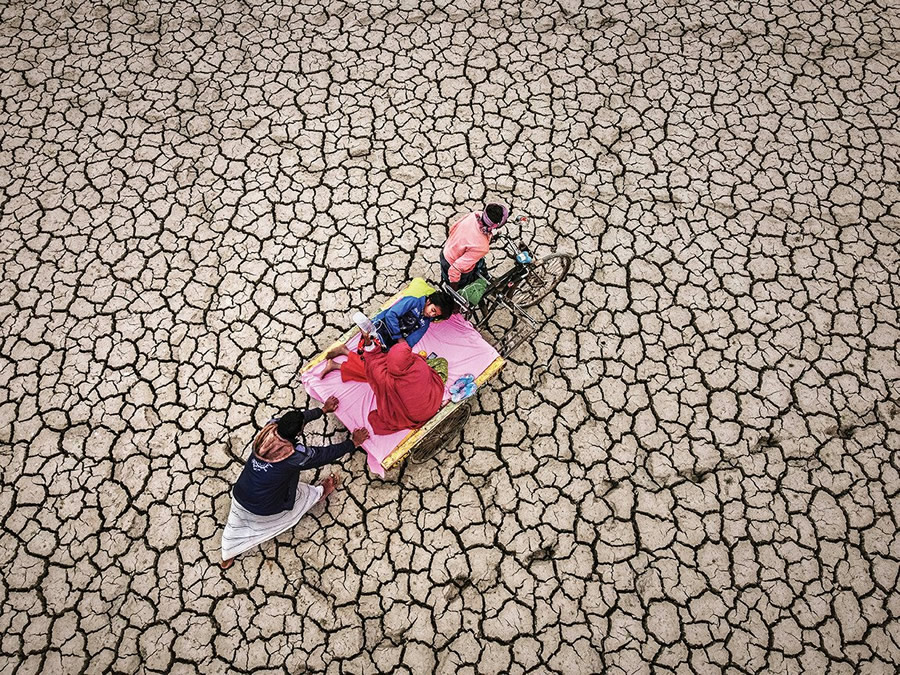 “Parents take their child to hospital in Rajshahi, Bangladesh, 10-15 miles across this drought-parched land, the mother holding a saline drip all the way. For much of the year, the land is dead like this, but for four months it’s flooded. Either way, safe drinking water is scarce, crops can’t grow, health problems abound – from dehydration to infection – and transport is limited. This family’s journey succeeded, and the child was treated for her diarrhoea. But many of those who attempt this journey are not so lucky.”

Health in a Heating World (series): An Elegy for the Death of Hamun by Hashem Shakeri 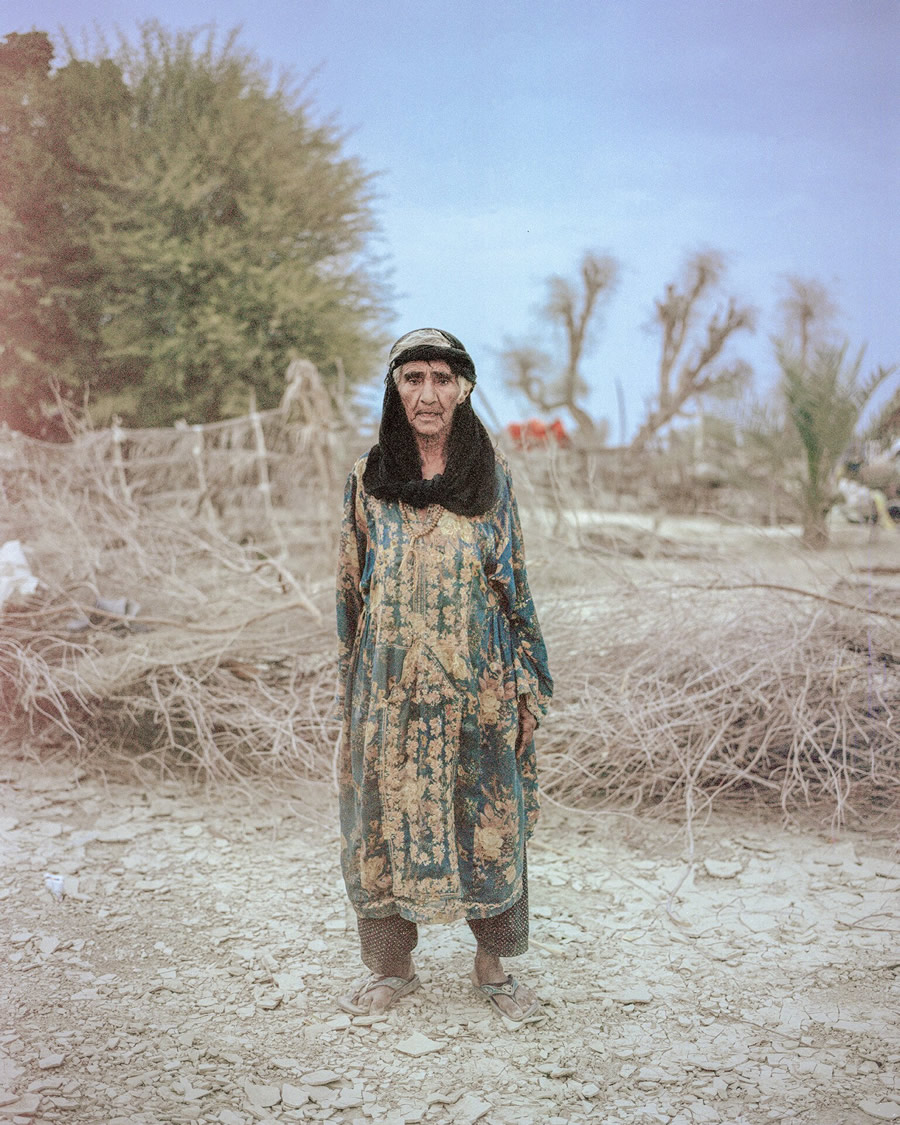 “For centuries, Sistan and Baluchestan has been a fertile region of Iran, with forests and productive cropland. But rapid climate change is turning it into a desert, bringing drought, hunger, unemployment and mass emigration.”

Until the Corn Grows Back by Lys Arango 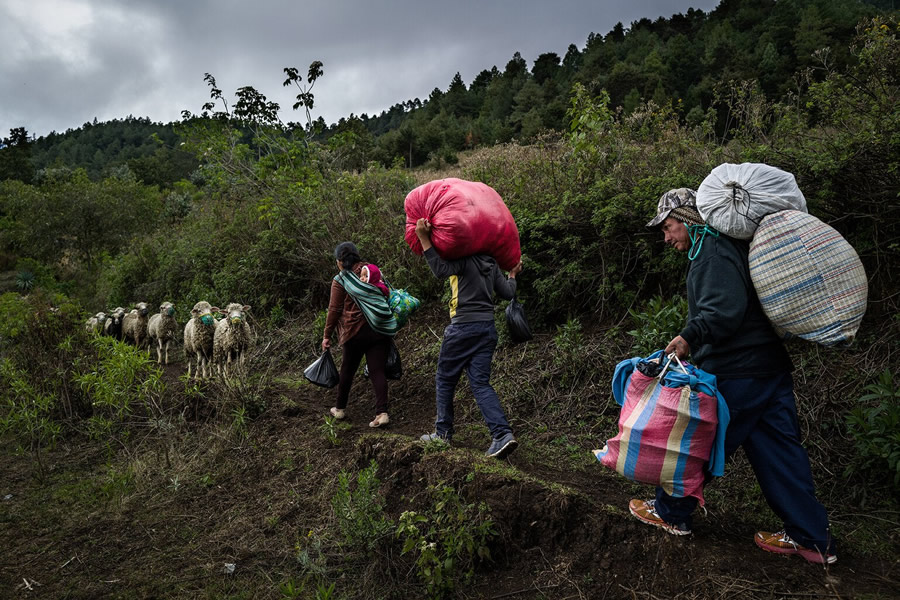 “Increasingly erratic climate patterns have produced year after year of failed harvests in Guatemala, forcing thousands of people to migrate, trying to escape poverty and malnutrition.” 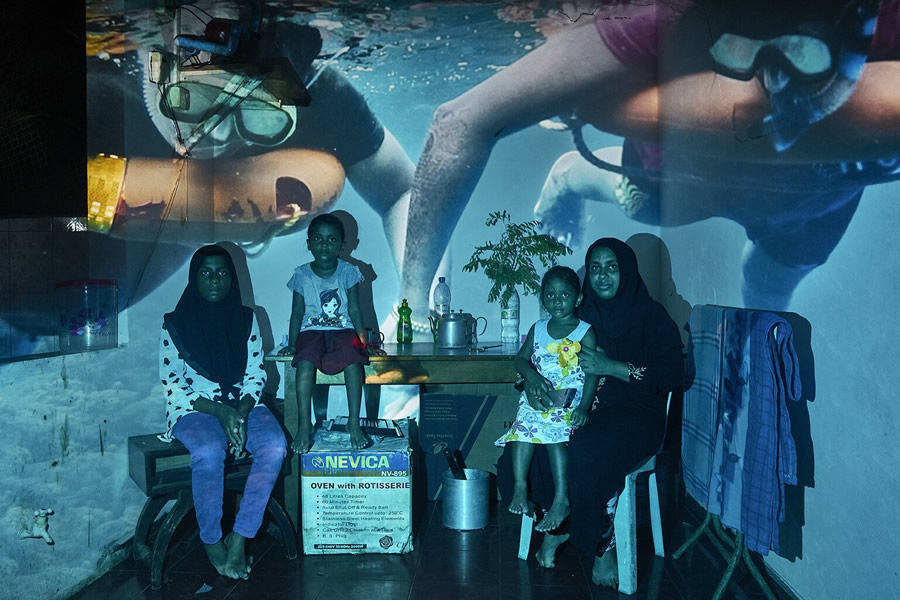 “As sea levels rise, the low-lying Maldives are predicted to be submerged by the end of the century. The government is working on solutions like barriers, and moving towards a net zero economy to promote sustainable living. To illustrate the future dangers, Edoardo Delille and Giulia Piermartiri projected tourist diving photos onto local scenes.”

Sun, Not Salt by Ayomitunde Adeleke 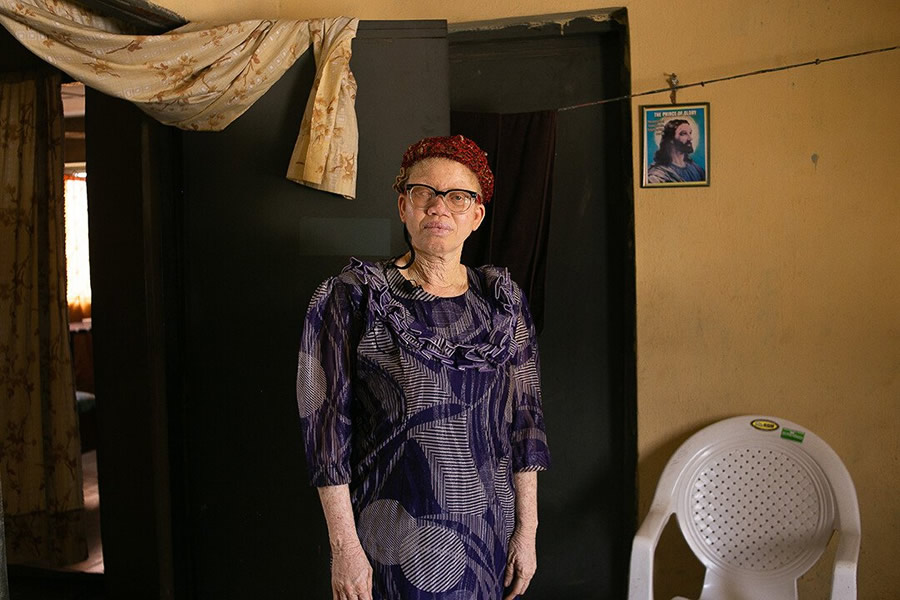 “There’s evidence that rising temperatures are increasing the risk of skin cancer – a particular danger to people with albinism. In Nigeria, the connection is not always well understood, and people often think the symptoms are caused by eating too much salt.”

Burnt Memory: Archaeology from a Climate Emergency by Gideon Mendel and Jonathan Pierredon “The Carr fire in 2018 was one of California’s most devastating wildfires ever, spreading across dry land and accelerated by a tornado. It destroyed 359 square miles of land and forced 36,000 people to evacuate, and its smoke spread across five states. Eight people died. Rising temperatures and extreme weather events make fires like this an ever-greater threat to human life. Gideon Mendel worked with Jonathan Pierredon to create tintype photos of damaged objects found in the ruins of people’s homes.”