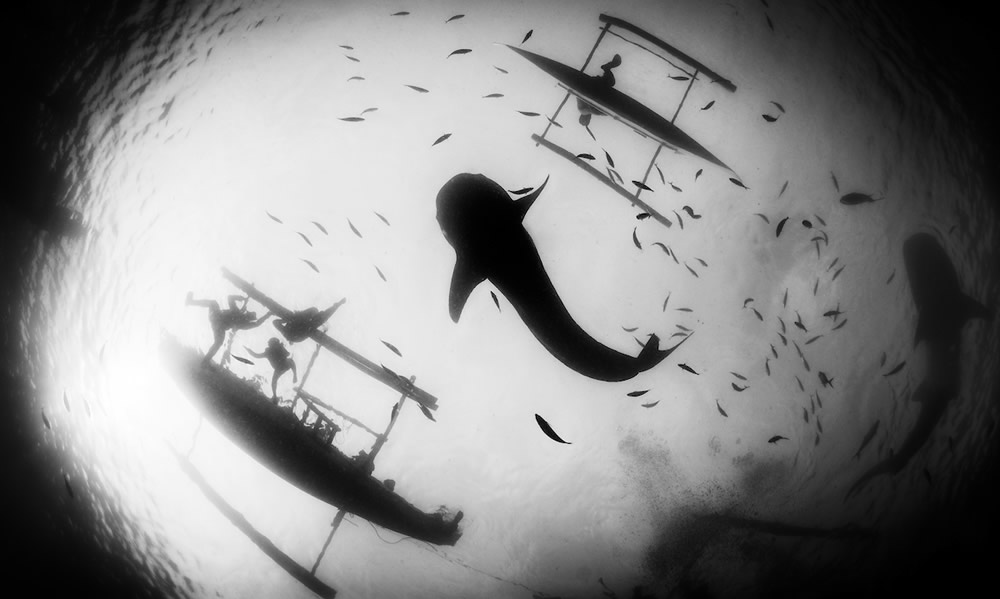 “The image shows fishermen feeding Whale Sharks near Oslob in the Philippines, while a group of snorkelling divers wonder at the spectacle. The spot is remarkably popular, attracting thousands of visitors, however, the situation is by no means ideal. Although the animals are no longer slaughtered as before, the attraction of continuous food supply changes their migratory path and in some cases the animals spend months rather than weeks here before continuing to their breeding grounds. Although touching the animals is strictly prohibited (threat of fine and imprisonment) it happens from time to time.” 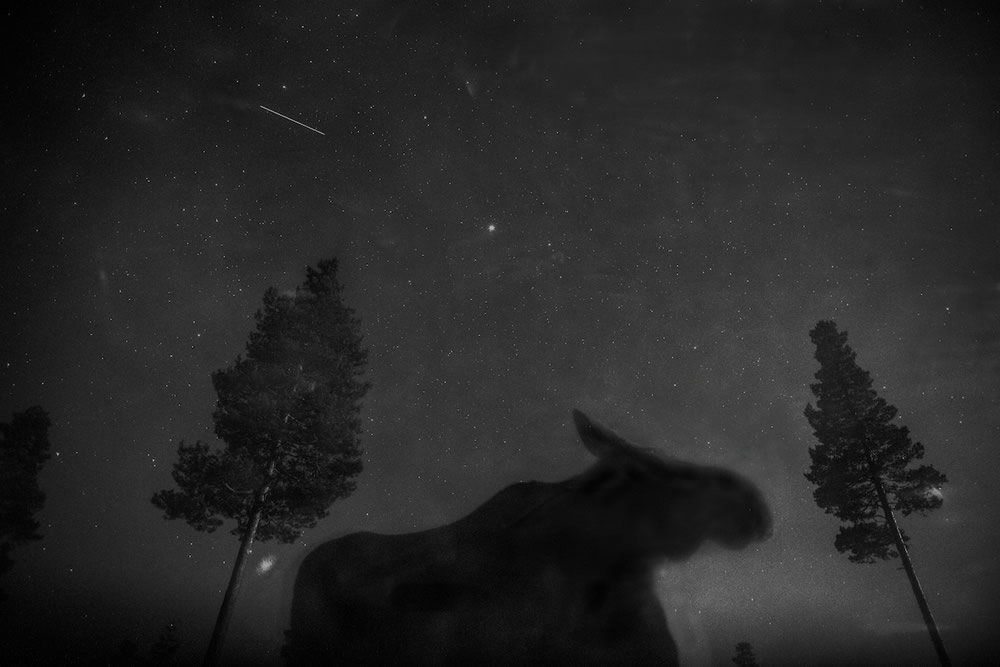 “This image was taken with a sensor triggered camera trap, left in the winter forest for several weeks at a path frequently used by moose. I used four cameras and more than 10,000 images were taken, but this was the one I liked best because of the shooting star. The nights were cold, minus 10-15 C, and therefore the lens was inevitably partly covered by frost crystals. Some of them created small reflexes caused by the moonlight, which are carefully adjusted in the final image. This is an image that is extremely unpredictable and difficult to capture. Just to have the moose standing still for 10 seconds is very unlikely to occur.” 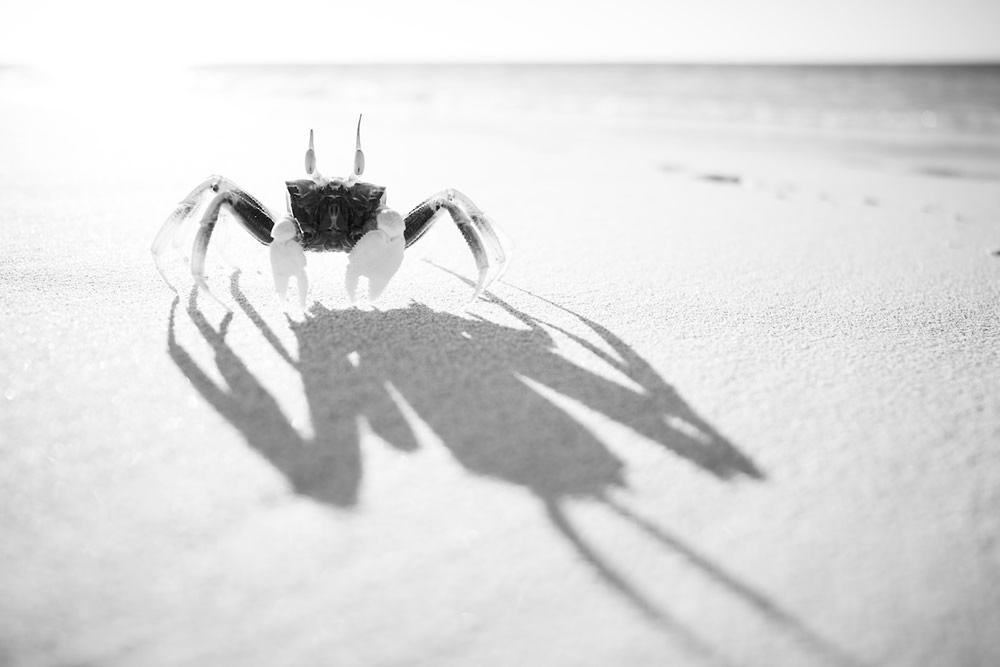 “The shadow of a Horn-Eyed Ghost Crab stretches out across the sands of Turquoise Bay in Western Australia as the sun draws closer to the horizon. While taking this photograph, I purposefully overexposed the background to draw attention to the form of the crabs’ body. I enjoyed capturing the contrast between the innocent-looking crustacean and the monster-like shadow that expanded out in front of it.” 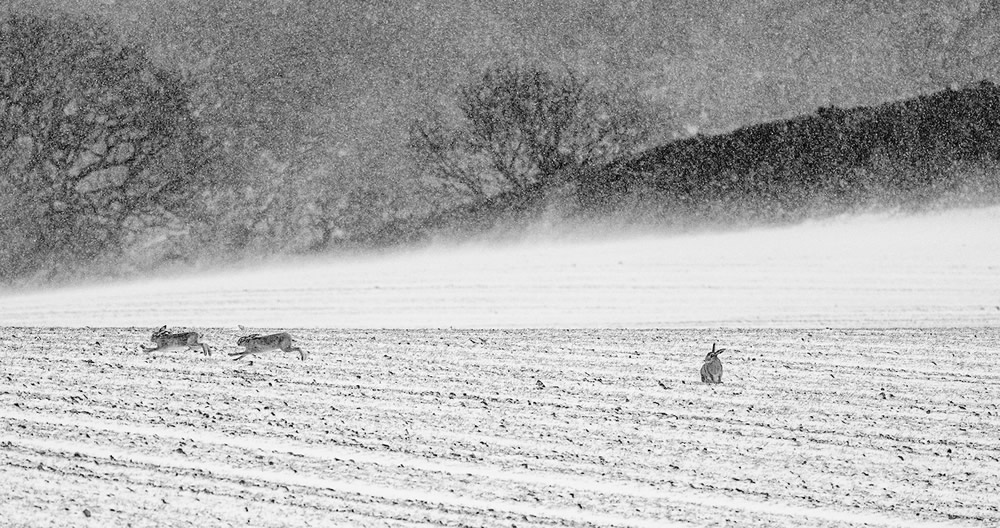 “At local wetlands, pelicans returning from a day on the ocean bathe vigorously. Shooting directly into hard afternoon light resulted in the dramatic silhouetting of the bathing bird and highlighted the spray going into the air. I used negative exposure compensation to avoid blowing out the highlights and losing the water droplets.” 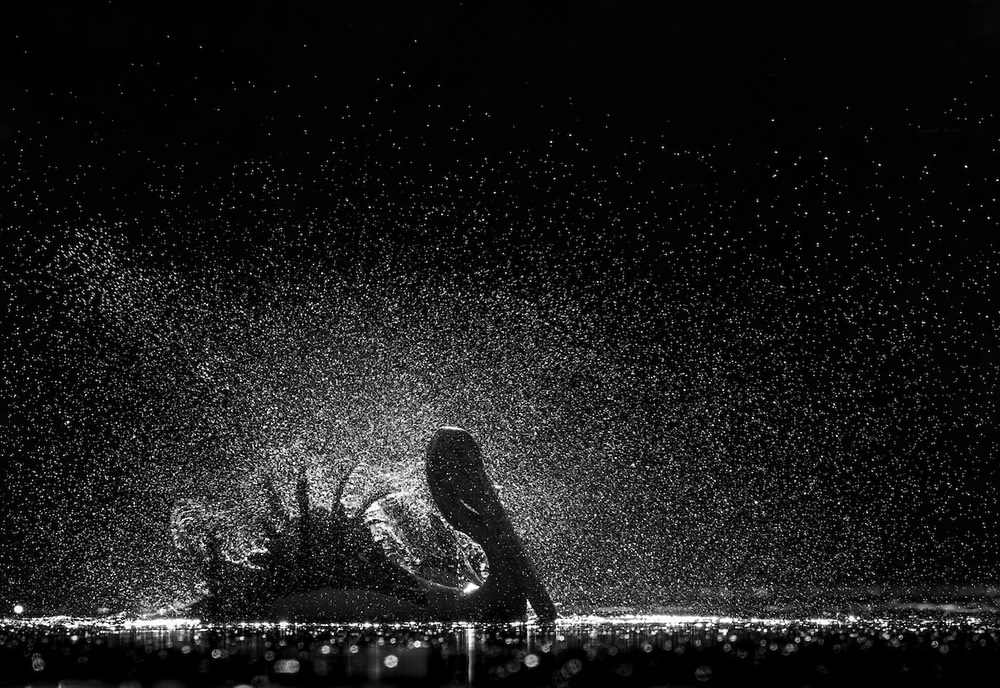 “Chasing hares was taken in February 2021 on the few occasions when we had snow in North Norfolk. I love the hares in Norfolk and often spend hours lying flat in a field or under a hedge waiting for them to get close. On this occasion, the hares were chasing each other in the field and the blizzard conditions added atmosphere to the picture. The hares were at a distance enabling me to capture the environment surrounding the event. I was freezing, but the picture was reward enough!” 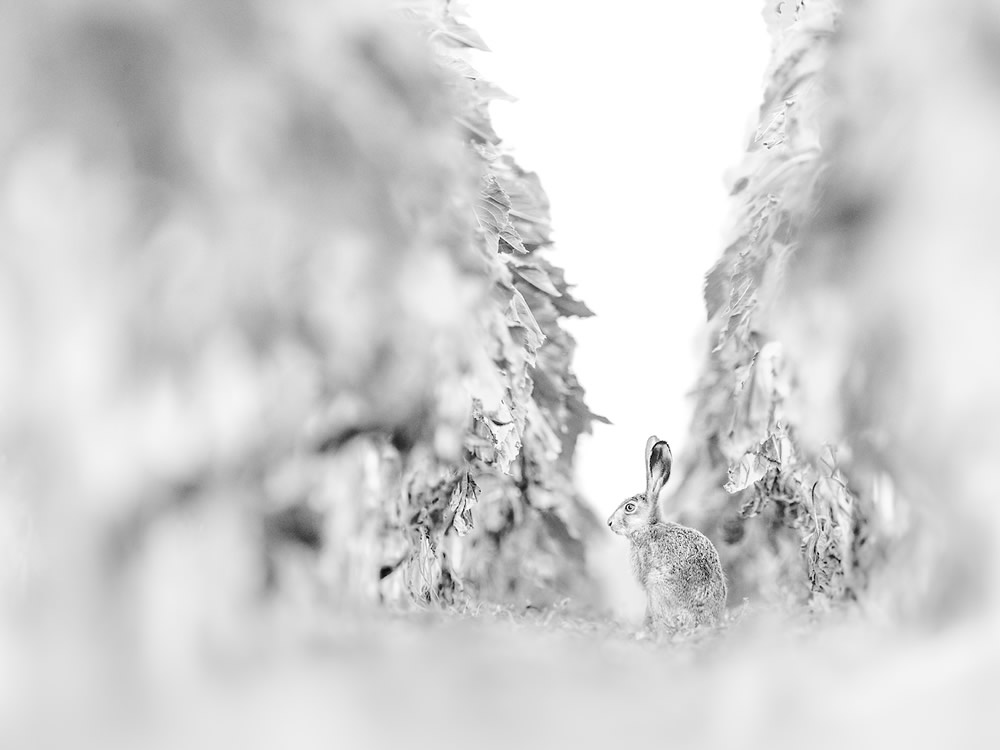 I photographed this Whale Shark during their annual migration through Isla Mujeres, Mexico. As only snorkelling is allowed around the fish, I was at the water’s surface as this Whale Shark swam directly beneath me. I was perfectly positioned to shoot directly downward as this 30ft long fish cruised below. Two remora fish can be seen over the whale shark’s left pectoral fin and the sun’s rays frame the animal perfectly. 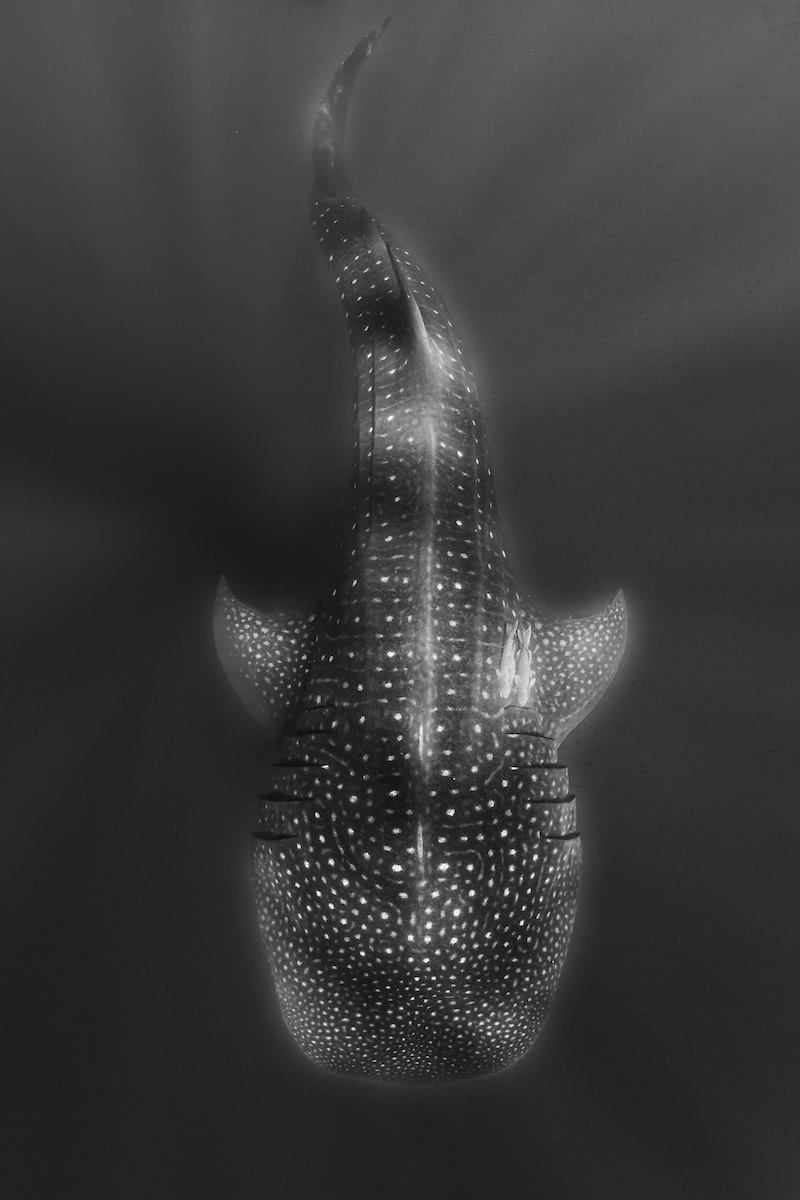 “I took this picture near the village of Bócsa in the Kiskunság National Park, Hungary. Here, the Rabbits live in big colonies. The males often jump to the air and fight with other over females or territory. In this case, they had a fight over territory. I came across this particular colony by accident so, as I had never taken pictures of Rabbits before, I decided to try. I visited them 72 times from March to October as I wanted to capture as many chapters of their lives as possible. It was an amazing experience to watch the life of the colony over this period.” 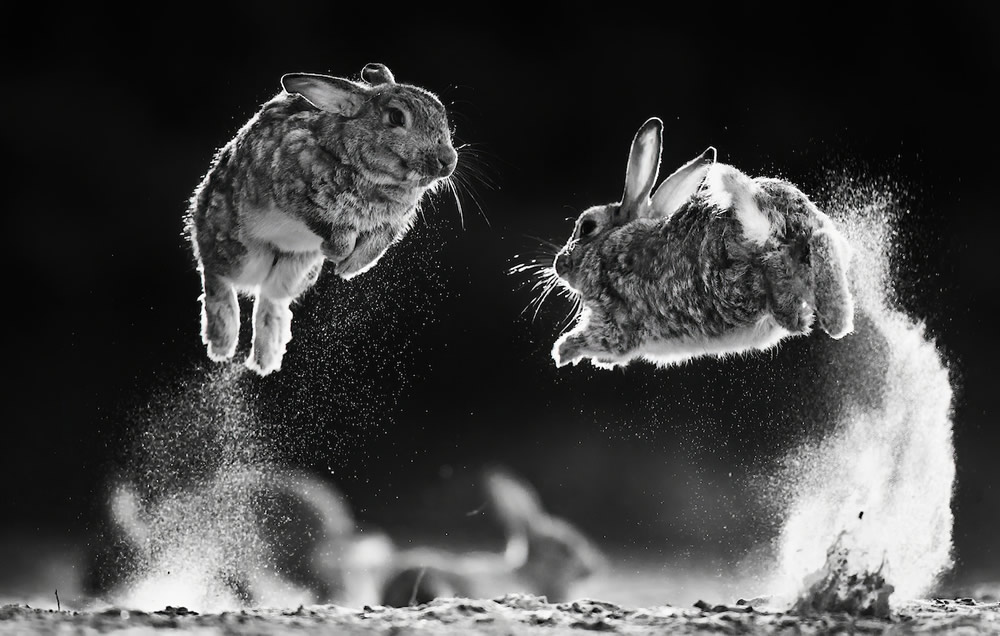 “At the end of summer, I spent some time photographing birds on a lake. I would arrive at the lake and go to the hide in darkness ready for the dawn. By 8am I had usually finished taking pictures. One morning as I made my way home, I heard strange noises near a sluice. When I got closer, I saw these brown bullheads. In the extreme heat, the water had run out of oxygen, so these fish were gulping for air, trying to survive.” 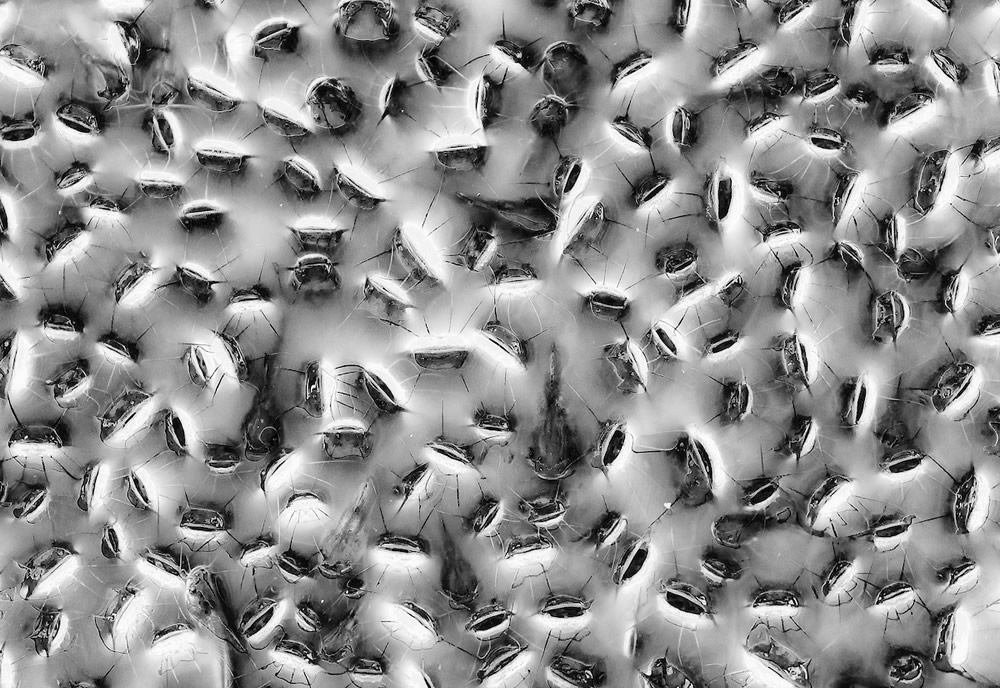 “While visiting the Borneo rainforest, I photographed many of the numerous frogs I saw on the trip. As amphibians are mainly active during the night, I had to work with flash most of the time. But this individual was photographed in the morning. I saw this frog resting on this wonderful big and heavily structured leaf, but every attempt to photograph it from above failed and the pictures didn’t turn out well. So, I decided to use a flash and photographed the silhouette of the resting frog through the leaf from beneath.” 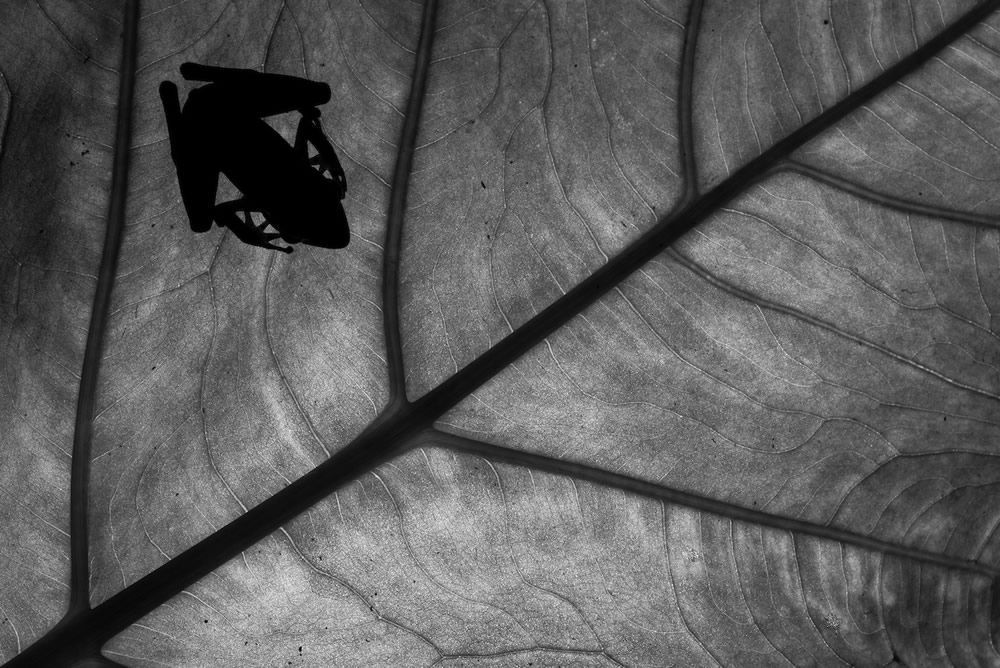 “In June of 2021 I had the opportunity to spend the day with a fellow photographer and friend paddling Hailstorm Creek in Ontario’s Algonquin Provincial Park to photograph Moose. We did not encounter any until we were making our way back out of the creek, when we came upon this massive bull. He was backlit and in full sun, but the heavy contrast was wonderful for creating a black and white conversion.” 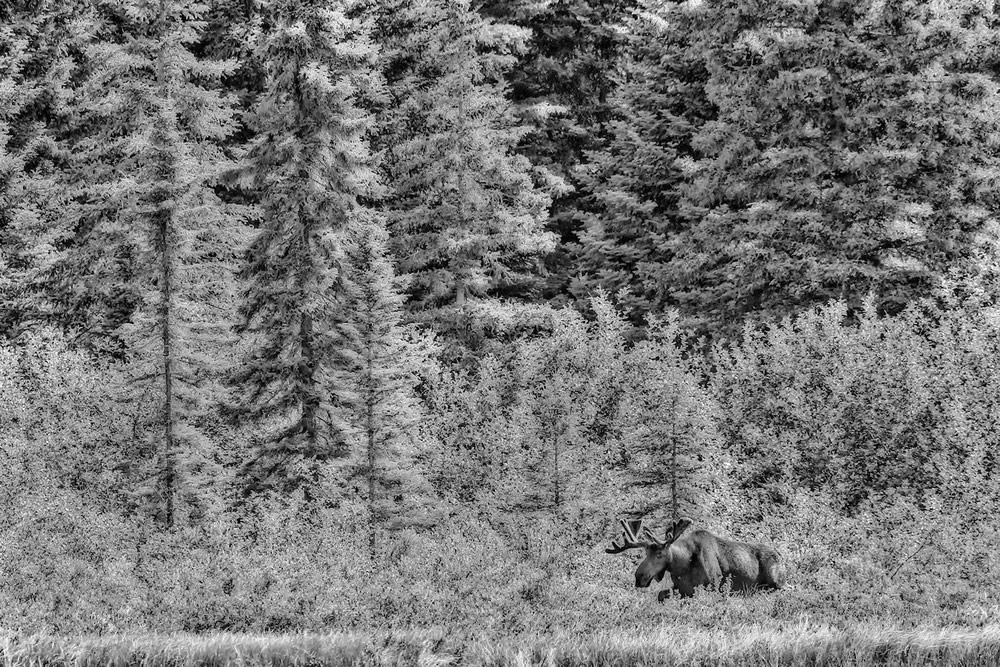 “The image was taken in Kenya in the Masai Mara whilst in a safari vehicle. We spotted a lioness with three cubs, and we spent about two hours just watching them play. Another lioness was very close by, and one of the cubs was constantly running away. On one occasion he ran up to the other lioness, she was not happy with the encounter and pushed him into a ditch which is when the mother came over to retrieve him. I took the shot as she emerged from the ditch into the sunlight with the cub in her mouth.” 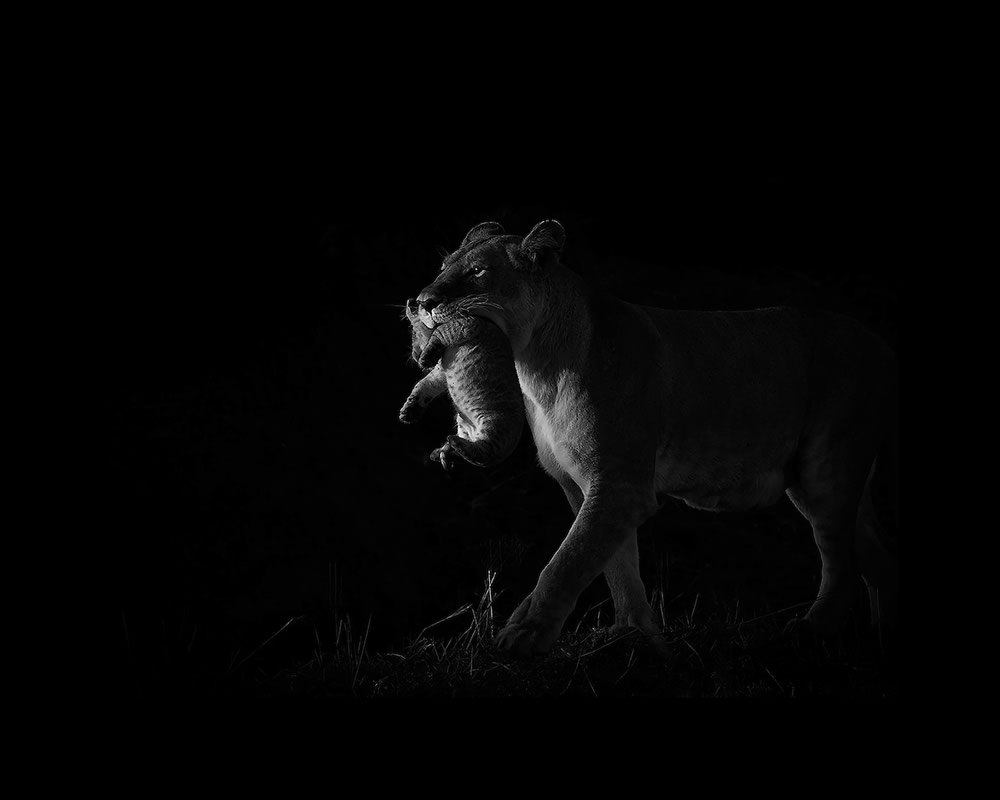 “This photograph of a spider’s web was taken on a March morning not long after the rain had disappeared. I spotted it on my garden gate and was captivated by the jewel-like quality of the water droplets that had been captured by it. I am fascinated by webs, and the fact that spiders have an innate knowledge of how to spin them never ceases to amaze me.” 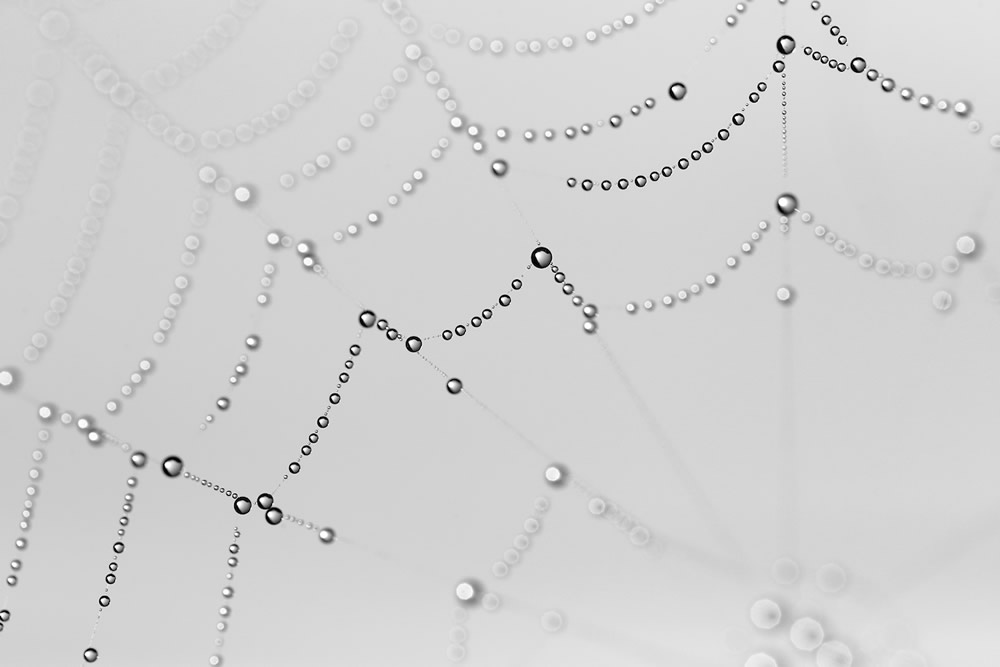 “I regularly visit a soda-lake near my hometown called Bokrosi Kis-Sóstó and the Nagy-Sóstó with my father. The road which leads to this place is called “Határ út”, which means “border road” because it is situated between two counties, Csongrád and Bács-Kiskun. Near this road I spotted a Hare in the sunflower field. I tried to get as close as possible to the Hare, and finally I was happy to have the opportunity to take a photo with an interesting perspective.”

Misty Lochs, Magical Woods and Spectacular Lightning Strikes: Feast Your Eyes on The Incredible Winning Shots for The 2020 Landscape Photographer of The Year Awards
Extraordinary Photos Of The Joy And Freedom Of Childhood At A Time When It Was Normal To Play Out In The Street
Daredevil Photographer Anna Arinova Captured The Awe-Inspiring Underground Labyrinths Across The Europe
This Artist Takes Magnificent Pictures Of LED Hula Hoop Over The Beautiful Landscapes
Inside North Korea: Silk Mill Workers
Intimate Bird Portraits Highlight The Refined Beauty Of Our Feathered Friends
A Small Town In Siberia Keeps It's Own Secrets At Night In Surreal Photographs By Vlad Tretiak
Shocking Real Stories of Feral Children Told with Dark Photos
Breathtaking Aerial Photos Of A Lavender Field In Southern France By Samir Belhamra
Beauty Over 100 Years Ago: 35 Stunning Postcards Of Beautiful Girls In Over The World From The 1900s And 1910s
Brand New Dewar's Street T-Shirt Collection
Powerful Photos Of Awful Liverpool Housing By Nick Hedges 1969-71
Powerful Portraits of the Refugees by Brian Sokol
Madonna Dazzles in Cleopatra-like Outfit at Super Bowl
"The Call Of The Void": Polish Photographer Lukasz Palka Captures Streets Of Tokyo
2020 Travel Photographer Of The Year Awards Winners
2017 National Geographic Travel Photographer Of The Year – Nature
Photo of the Day: Where Are You, Humans?
19 Times People Took An Ordinary Photo And Got A Renaissance Masterpiece
1980s: The Period Of Women Rock Hairstyle Boom
Underwater Portraits Of People Diving Into A Freezing 4°C Dunking Pool
Abandoned Floating Submarine Base PB-24. The Only One Located In Russia.
2019 Australian Geographic Nature Photographer Of The Year Winners
A Girl and Her Room
The Photography Duo Blending Art, Beauty And LEGO
Budapest in the 1980s Through Fascinating Photos
Jack London’s Extraordinary Photos of London’s East End in 1902
New York City In 1980s Through Photographs By Janet Delany
"Memoirs Of The Geisha" - A Look Back At The Traditional Japanese Female Entertainers
Trapped Raccoons Saved from a Waste Container
black and white, contest, wildlife, winners