Japanese Actress Akiko Wakabayashi Posing With the Toyota 2000GT as Featured in “You Only Live Twice”, 1967 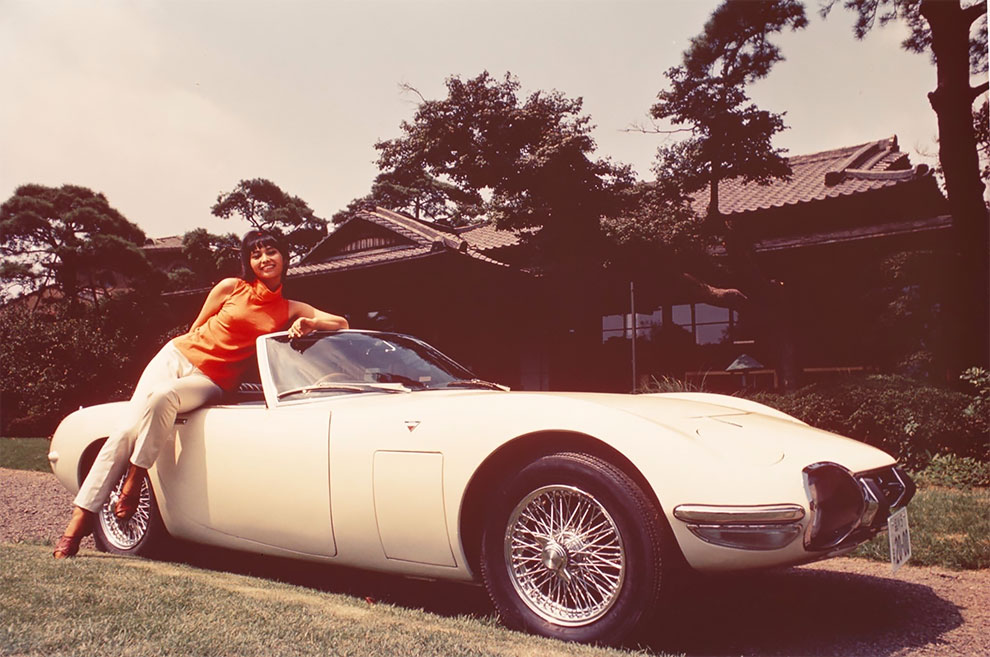 You Only Live Twice was the fifth James Bond movie and was set largely in Japan. Bond was once again played by Sean Connery and the plot for this latest adventure involved the terrorist organization SPECTRE hijacking American and Soviet space capsules in a bid to start World War 3. 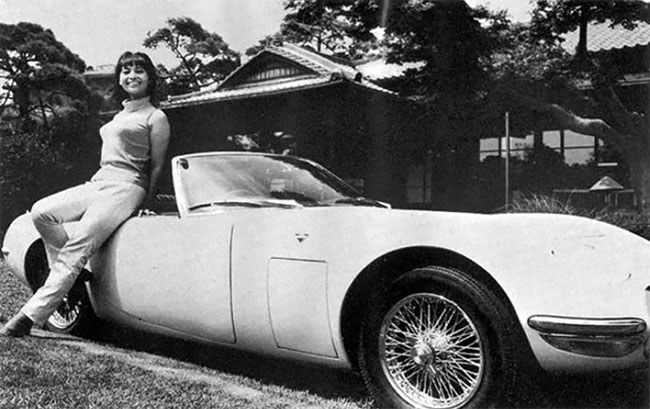 Although Bond wouldn’t do much driving in You Only Live Twice, the film’s producer, Albert ‘Cubby’ Broccoli, had seen Toyota’s prototype 2000GT at the Tokyo Motor Show in October 1965 and thought it would make an ideal machine for 007’s accomplice, Aki (played by Akiko Wakabayashi). 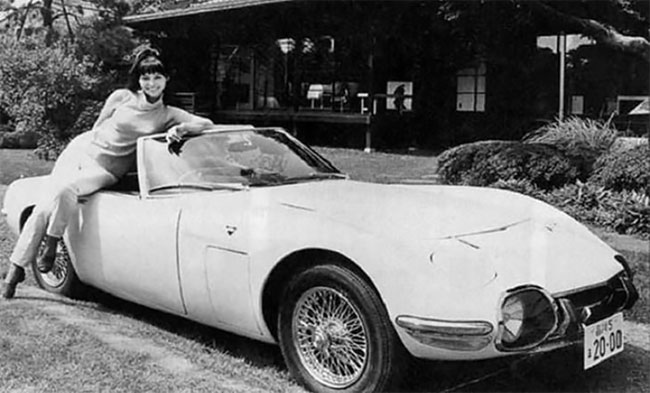 In early 1966, Broccoli called Toyota with the offer of an appearance for the 2000GT in You Only Live Twice. However, there was a problem as Connery’s large frame meant it was impossible for him to fit comfortably: with several scenes viewed from around the cockpit, a solution would need to be found. Broccoli ultimately decided the only way a 2000GT could make it into the movie was if a Roadster version could be produced as this would solve all the visibility issues. 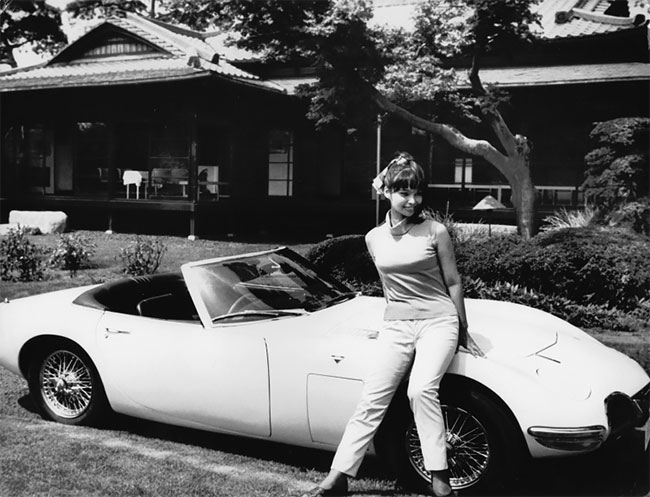 At the time, Toyota had still only built a couple of prototype Coupe 2000GTs and series production wouldn’t begin until May 1967. They were nevertheless enthusiastic and managed to complete the order for a pair of cars within a frantic few weeks. 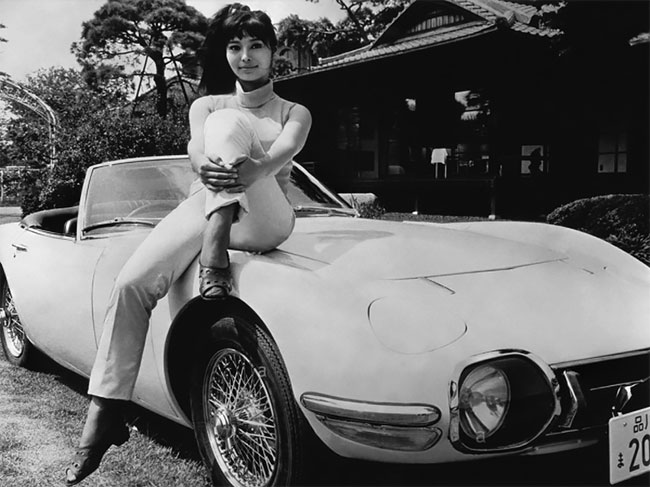 Two beautiful Roadsters were created. The work took place at Toyota’s special Toyopet Service Centre in Tsunashima. Both cars were painted white with black upholstery and wire wheels. Neither had side windows or a hood of any sort. 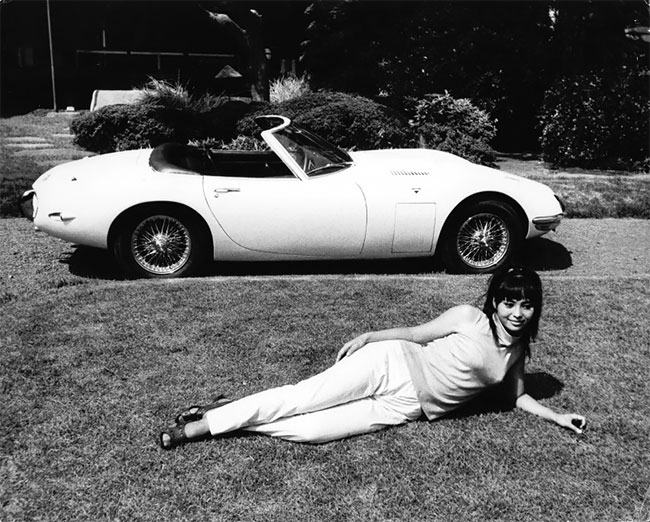 One of the Roadsters would be used for filming and the other would act as a back-up. When shooting was over, the back-up car stayed with Toyota in Japan. It was equipped with a largely standard interior. By contrast, the film car was kitted out with a variety of gadgets by John Stears and his renowned special-effects team at Pinewood Studios in England. 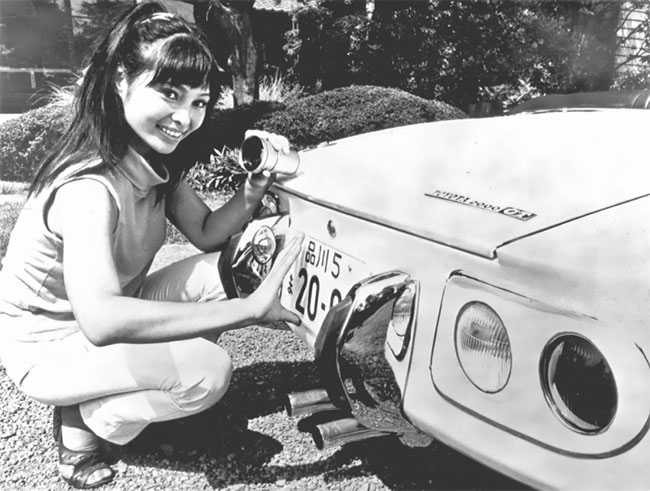 After the movie was completed, the gadget-laden car that had been taken to England mysteriously disappeared. Its control panel later turned up on a recreation in the old ‘Cars of the Stars’ museum in Keswick. 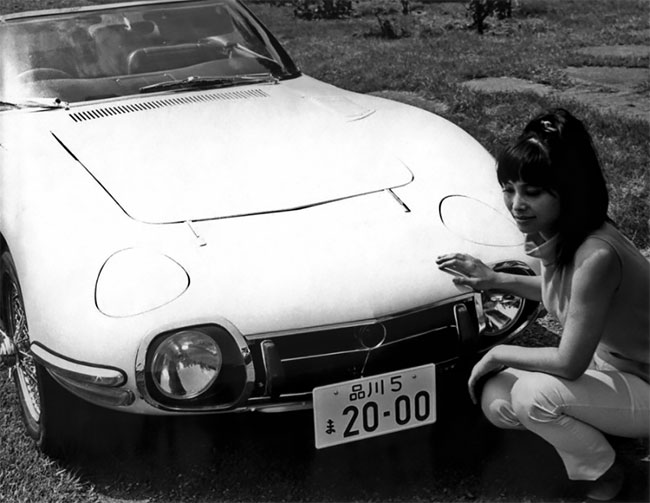 Meanwhile, the back-up car with its standard interior was used for promotional purposes and went on display at the Geneva Motor Show in March 1967. It was then re-painted blue and emblazoned with 007 decals. Another repaint followed (this time in grey) and it briefly served as the Fuji Speedway course car before turning up in Hawaii in 1977. Toyota bought it back, restored it and this car now forms a central part of their factory museum. 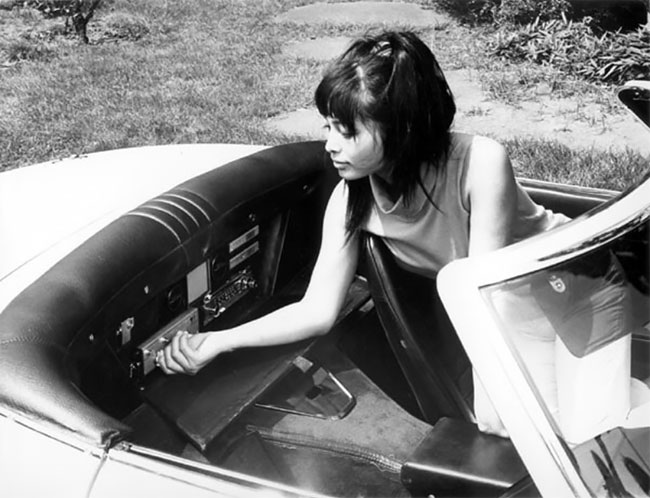 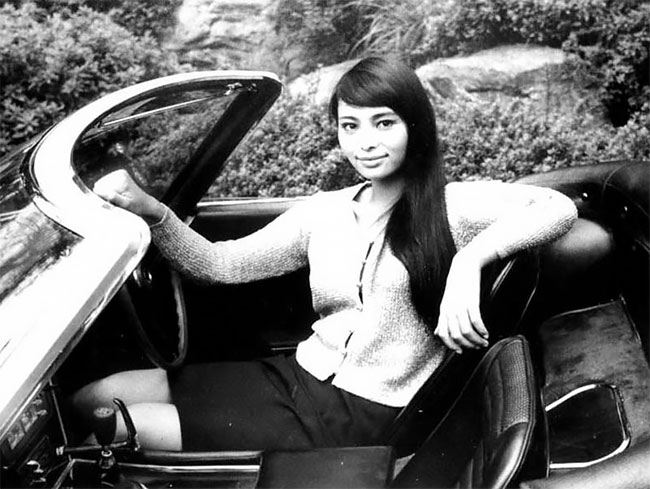 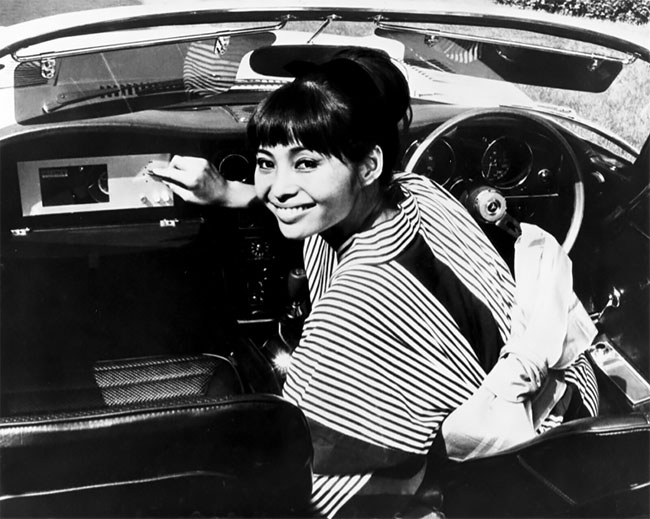 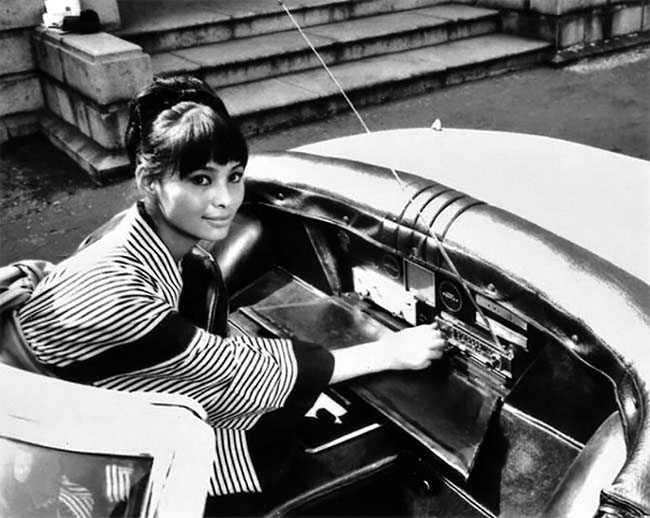 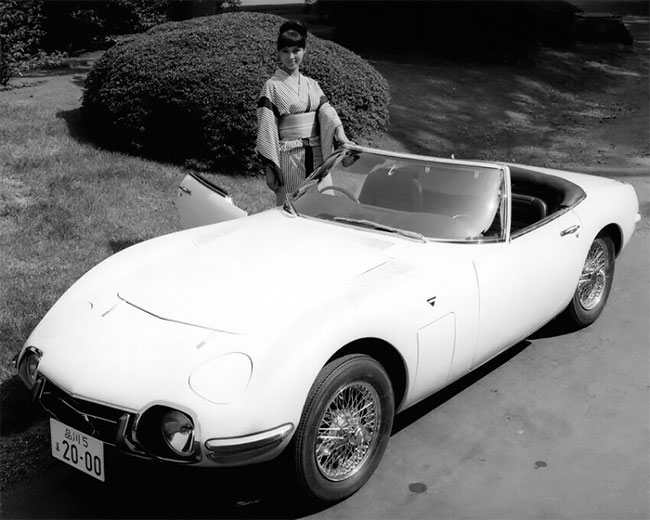 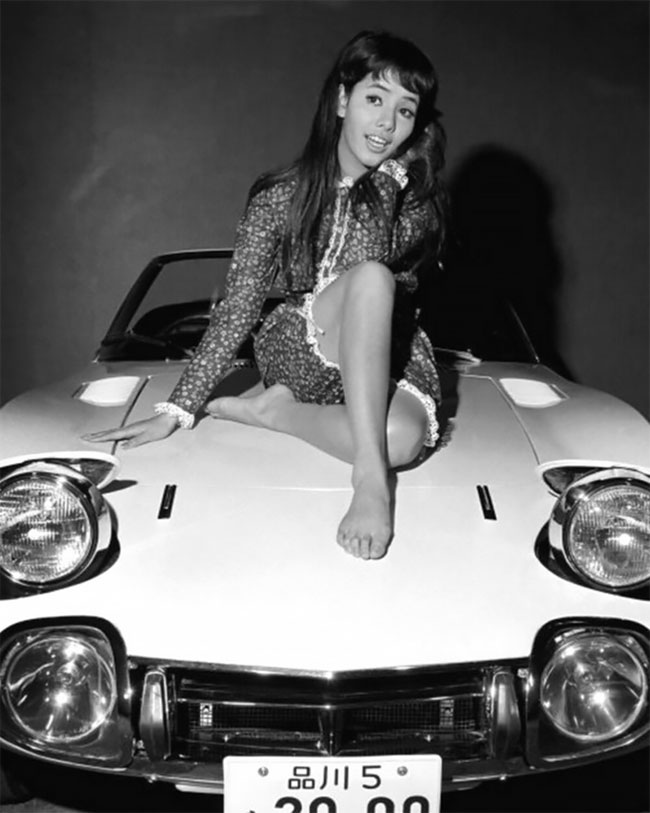 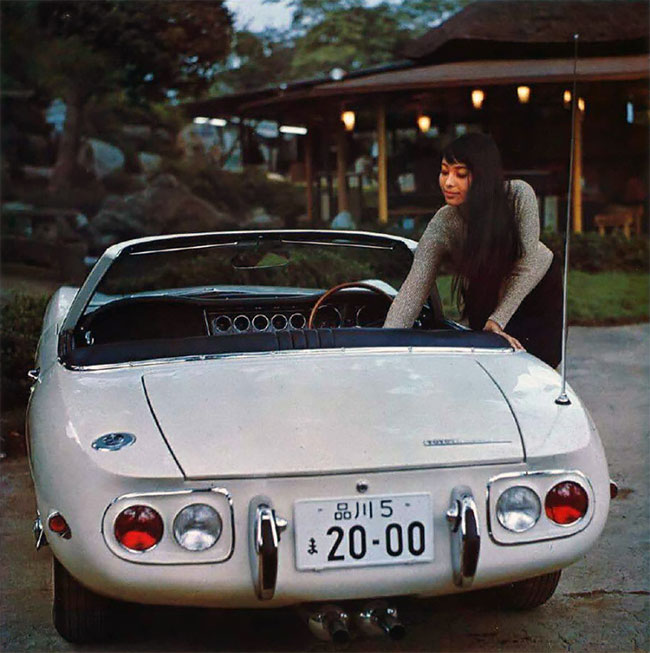 Vintage Photographs of Early Colossal Vertical Parking Garages, 1920-1960
Camera Van: The Art Car by Harrod Blank
Hong Kong At Night In The 1960s Through Amazing Color Photos
Humorous Comic Fat Lady Postcards by Donald McGill From the Early 20th Century
Swedish Designer Transforms Retro-Styled Household Appliances Into Series Of Cross-Stitch Art
Two Brothers Photographed Every Stage Of The NYC Subway Construction, From 1900-1939
Life in the Past Through Stunning Color Photos Captured by Fred Herzog
Concepts From Future Past: Autobianchi Runabout
Oracle Team USA Capsizes its Biggest, Baddest Boat
Recycling Grandma's Replacement Parts
"We Were Born To Make The Fairy Tale Come True!": 51 Sensational Soviet Space Posters
Want to Join the Jet Set? Water-Powered Jetpack Propels Fliers up to 30ft into the Air... but it still Costs $230 a Go
Vintage Photographs of Women Flaunting the Inflatable Bras to Look Like Marilyn Monroe in 1952
Beautiful Photos That Defined ’50s Women’s Swimsuits
Breakfast in Bed: Extraordinary Color Photographs Revealed the First Class of Air France in the 1950s
After Watching Chernobyl, Couple Decided To Design Their Apartment In Soviet Style And Listed It In On Airbnb
GroundBot
"One Day with Salvador Dalí": A Surreal Photo Shoot of Salvador Dalì in His Seaside Villa, 1955
Stunning Images of Freshly Frozen Cars Arrived to Vladivostok Sea Port
Fabulous Photos of Christmas Shopping In New York City, December 1910
The Russians Make The Best Truck In The Universe For $50K
The Story In Pictures Of The Giant Hughes H-4 Hercules Made Entirely Of Wood In 1945-1947
The Rise of Original Paint, Rust, and Patina: How Volkswagen Fanatics are Embracing the Unrestored Look
Don't Wait to See How The Earth Gets Old With Greenpeace Russia's EarthApp
1960s, 2000GT, Akiko Wakabayashi, cars, retro, toyota