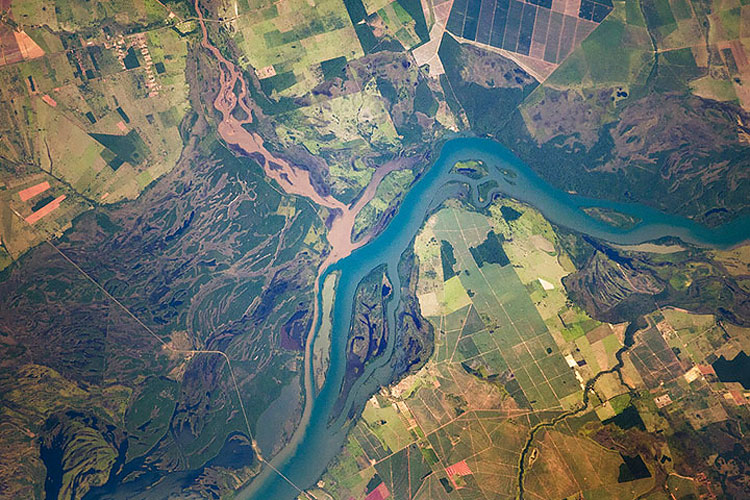 The Paraná River floodplain along the Mato Grosso-São Paulo border, Brazil. The river appears as a wide, blue strip with the muddy brown water of the smaller Verde River entering from the north-west (top left). An extensive wetland (dark green) and the floodplain reaches a width of 11 kilometres (about 7 miles). The thin line of a road crossing the floodplain also gives a sense of scale. The floodplains are bordered by numerous rectangular agricultural fields, containing coffee, corn, and cotton crops. (ISS/NASA) 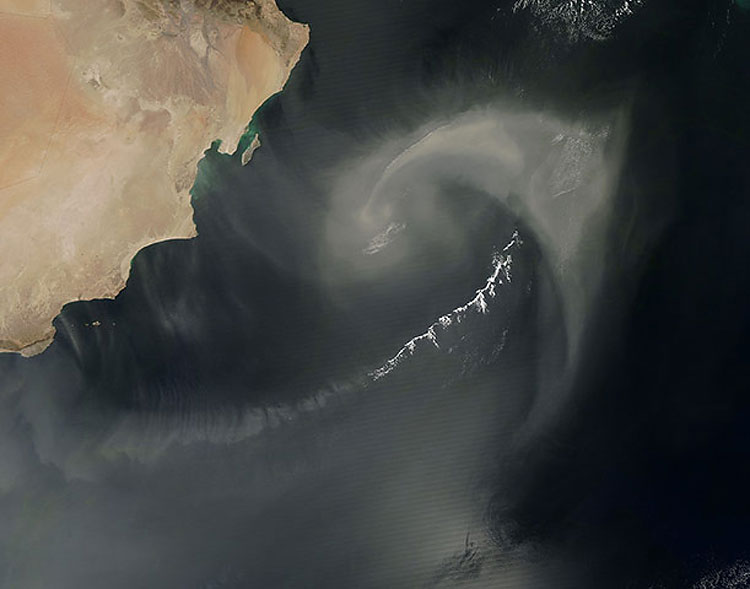 Dust and clouds approximate a paisley pattern over the Arabian Sea. The dust in this storm likely arose from a sand sea known as the Empty Quarter, or Rub’ al Khali. Holding roughly half as much sand as the entire Sahara Desert, the Empty Quarter covers parts of Saudi Arabia, Yemen, Oman, and the United Arab Emirates, and helps make the Arabian Peninsula one of the world’s most prolific dust-producing regions. (MODIS/Aqua/NASA) 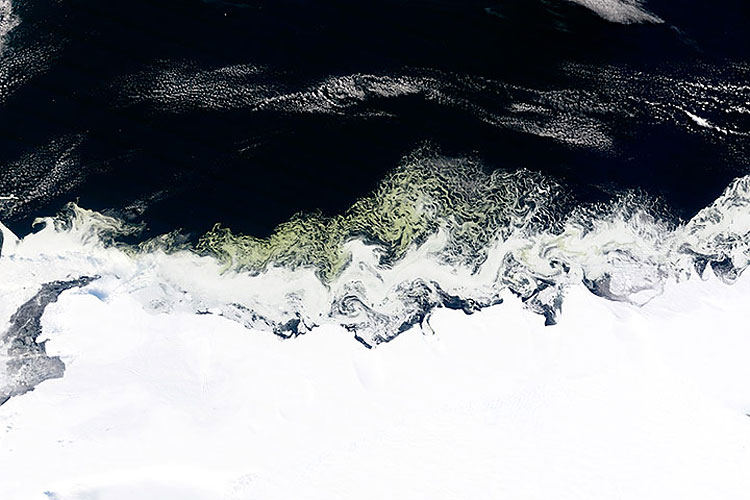 Nasa’s Terra satellite flew over East Antarctica and detected swirls of green amid the ice off the Princess Astrid Coast. Green shading in an otherwise blue ocean usually indicates a bloom of phytoplankton, plant-like organisms that turn sunlight into biomass. Phytoplankton are the centre of the ocean food chain, feeding everything from krill to penguins to whales. (MODIS/Terra/NASA) 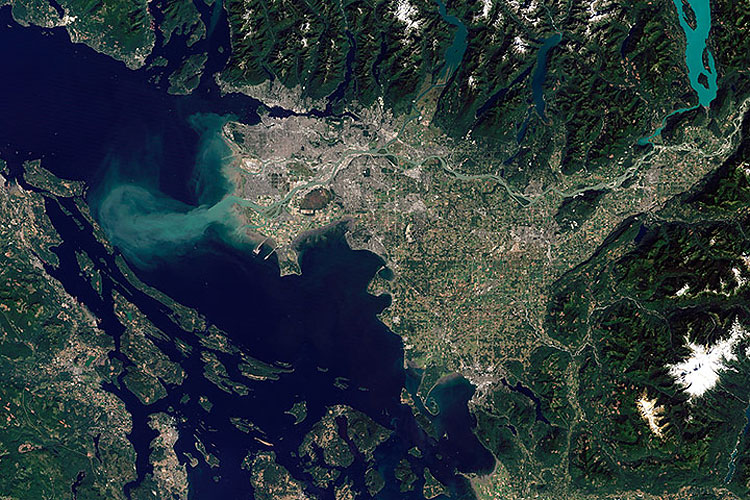 Arising from headwaters around Mount Robson in the Rocky Mountains, the Fraser River starts as a fast-moving stream. The river angles northward around the Columbia Mountains, picking up so much sediment that it appears brown by the time it reaches Quesnel. Near the coast, the river flows over flatter terrain, so it slows down and spreads out. On the final leg of its journey, the Fraser travels along the southern fringe of Vancouver. Flowing through braided channels, the Fraser River meanders toward the sea, emptying through multiple outlets. The river’s abundant sediment forms a distinct plume west of Vancouver, extending across the Strait of Georgia to the eastern shore of Valdes Island. (Landsat 5 /NASA) 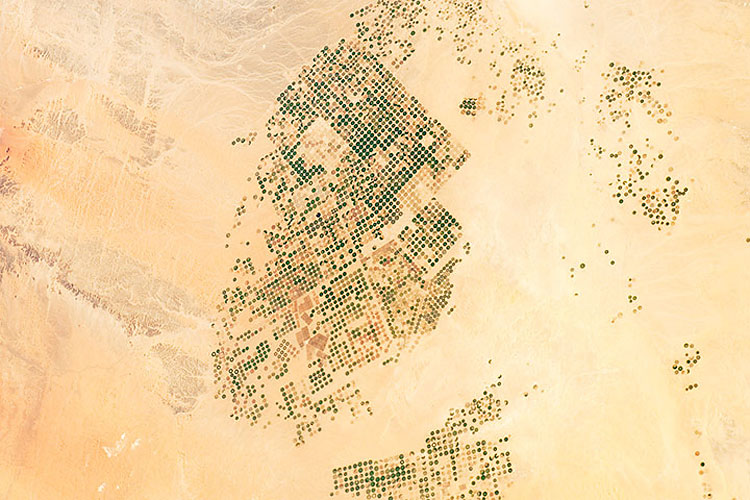 Abundant green fields in the midst of a barren desert in Northern Saudi Arabia. As recently as 1986, there was little to no agricultural activity in the Wadi As-Sirhan Basin. But over the past 26 years, agricultural fields have been steadily developed, largely as a result of the investment of oil industry revenues by the Saudi government. Crops grown in the area include fruits, vegetables, and wheat. The fields are irrigated by water pumped from underground aquifers. (ISS/NASA) 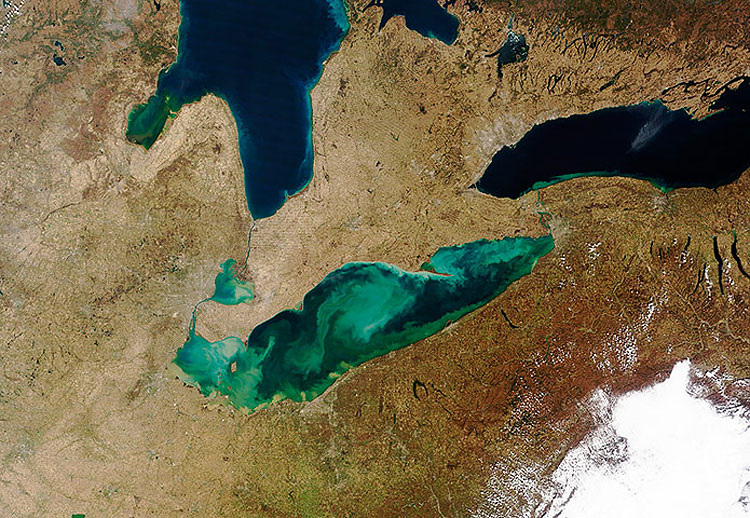 After a nearly ice-free winter, North America’s Lake Erie was filled with swirls of suspended sediment and algae on the first day of spring 2012. (MODIS/Terra/NASA) 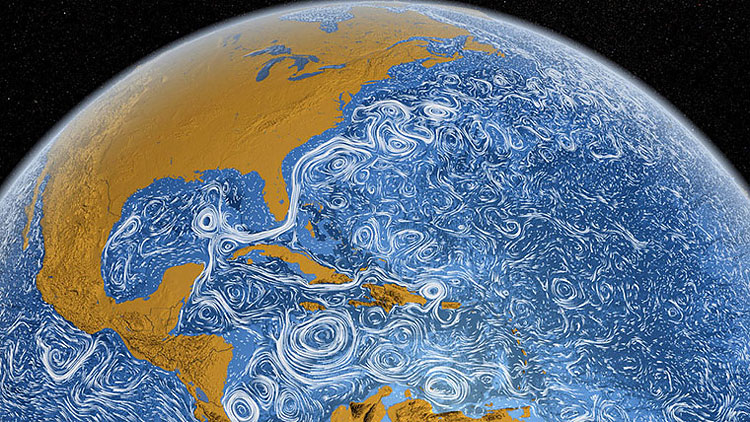 This image shows ocean surface currents around the world during the period from June 2005 to December 2007. (NASA) 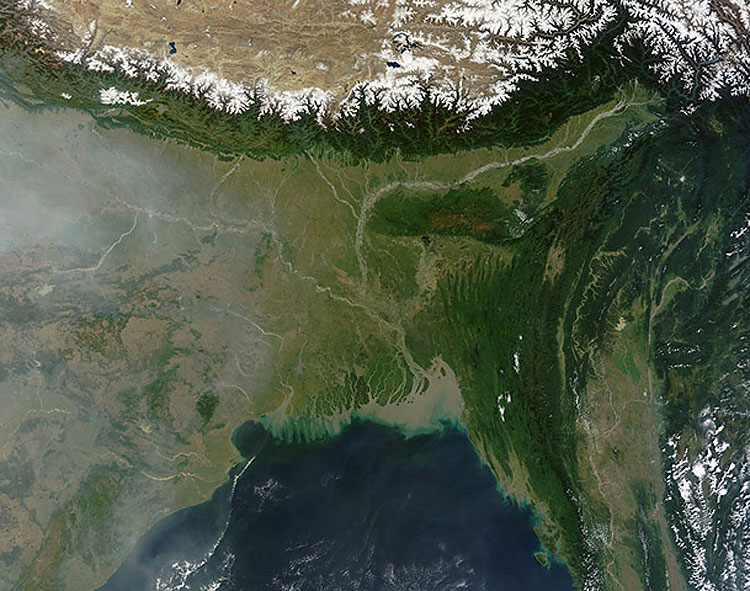 This natural-colour image shows all of Bangladesh, as well as parts of India, Burma, and the Bay of Bengal. Included in the scene are the Sundarbans of the Ganges-Brahmaputra Delta. The Geological Survey of Bangladesh explains that most of the sediments covering the country are geologically young – deposited in the last 10,000 years. Deltaic silt and sand and mangrove forests dominate the south-western part of the country. Sand and gravel cover the north-western parts. North-eastern Bangladesh is covered by a combination of clay, peat, gravel, and sand. (MODIS/Terra/NASA) 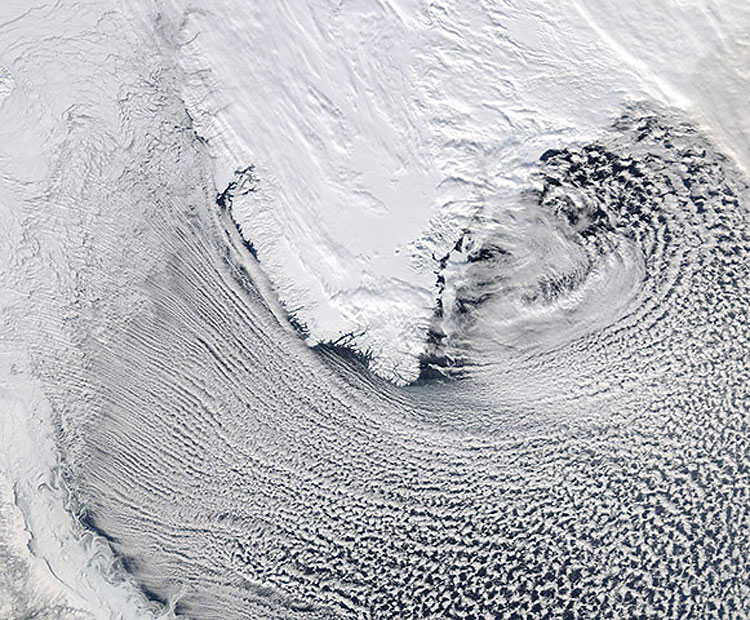 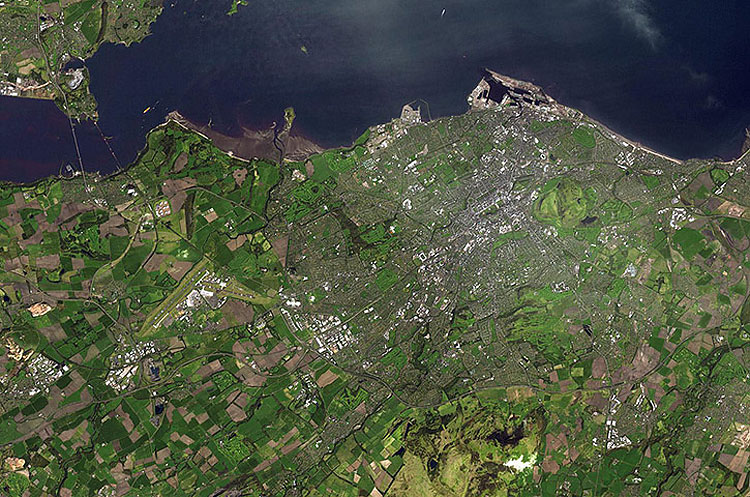 The city of Edinburgh is the capital of Scotland, and lies along the Firth of Forth. The area has been settled at least since the bronze age. By the 12th century Edinburgh was well established, centred around the castle rock. The city has maintained its medieval plan in the Old Town. In the 18th century the New Town was laid out to alleviate the problem of overcrowding. It can be seen as a regular rectangular grid here. (ASTER/NASA)

Beautiful Portraits Of Rare And Endangered Birds That Look Simply Stunning
Photographer Anthimos Ntagkas Captures Mystically Unexpected Street Pictures
Breathtaking Aerial Shots Of Barcelona, Revealing The City's Symmetry
Spectacular Entrants and Winners of The Festival of Ethical Photography 2022
Disney Just Released Striking "Lion King" Photos Showing The Characters And The Stars Behind Them
Whale Shark with 50 Remoras in Her Mouth Wins Scuba Diving Magazine’s 2020 Underwater Contest
Traveling Couple Captures Ethereal Images In The Most Unspoiled Places Around The World
Captivating Vintage Photos of People in Encampment, Wyoming From Between the 1920s and 1930s
Death-defying Stunts
Tornado Captured in Couple's Wedding Photos
Japanese Photographer Spends His Life Shooting Women's Thighs
Beautiful Color Photographs Of England During The 1920s
Seeing Beauty In A Cold And Wet New York City With Moody Photos Of Saul Leiter
Photograher Captures Photos From The Highest Places In Tokyo Show The Beauty Of The City
My 365-Day Project Lets Me Explore Photographic Opportunities
Homeless Couple Get A Makeover And A Surprise Charity Wedding After Being Together For 24 Years
The Highly Commended Entries for The Wildlife Photographer of The Year 2022
Photographer Captures Stunning Overhead Shots Of An Island In Finland During All Four Seasons
Striking Drone Photography By Martin Sanchez
Surreal & Wild Creatures Emerge From Thrown Sand In Photographs By Claire Droppert
Japan 2077: Takaaki Ito Captures Cyberpunk Tokyo In Dark And Moody Neon
Beautiful Vintage Color Photographs Of The Japanese Warriors Captured Over 150 Years Ago
“Workwears”: We Are Not Our Jobs, A Photo Project By Bruno Fert
"To See Paris And Die": These Photos Compare Paris And Its Detailed Chinese Replica
earth, march, satellite

Apple Reveals The Best Night Mode Photos Shot On iPhone
Spectacular Winning Images of The Bird Photographer of the Year 2021
"Tyne Pride And Fall": Chris Killip’s Photographs Of Britain’s Vanished Industrial Heartlands
Photographer Captures Beauty Of Spiral Staircases In Campuses
Amazing Award-Winning Photos Of The Wildlife Photographer Of The Year 2017 Contest
Unique Photographs of Russian Beauties in Old Costumes
Stunning Photographs of Ellen O’Neal, The Greatest Woman Freestyle Skateboarder in the 1970s
Spectacular Winning Photos Of The Astronomy Photographer Of The Year 2018 Contest
Before The Computers: Looking Back On Typewriters Era
"We Were Once Alive": 100-Year-Old Portraits from Rural Sweden by John Alinder
2007 ‒ 2023 by Design You Trust. Proudly hosted by WebHostingBuzz.
Privacy Policy · Terms of Service · Content Removal Policy ❤️ 🇺🇦