Mine Kafon Project by Massoud Hassani 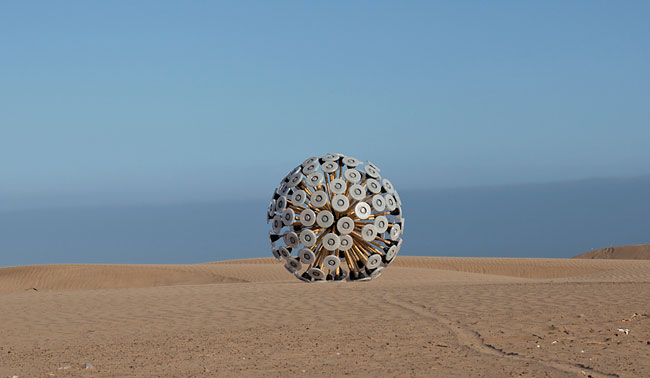 The Mine Kafon is a low-cost wind-powered mine detonator with the appearance of a giant spiky-armed tumbleweed.

Currently it is at a prototype stage and we are looking for support in order to turn it into a reality. If successful, we will be able to develop the prototype and test it in real minefields. Filmmaker Callum Cooper will also produce a documentary that will raise awareness on this global issue.

MINE KAFON is a Winner in the $200,000 FOCUS FORWARD Filmmaker Competition, and is vying for the $100,000 Grand Jury Prize, to be announced January 22 at the 2013 Sundance Film Festival. It has also been recognized as an Audience Favorite. Learn more about the Competition and FOCUS FORWARD at focusforwardfilms.com 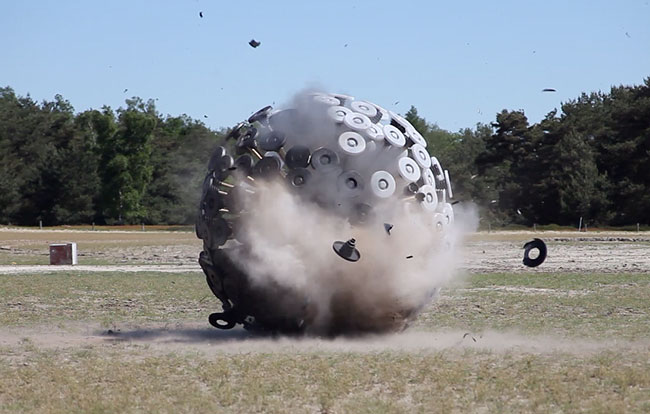 In countries with war-ravaged pasts, concealed landmines pose a silent, hidden threat. Lurking underground for years, they risk throwing open fresh wounds in communities which are just beginning to heal. 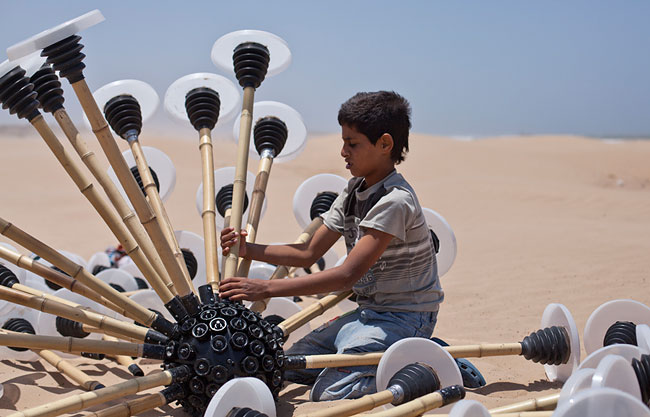 Afghanistan, a country with a long history of war, is dotted with these subterranean dangers. According to one report, about 1 million Afghans live within 500 meters of areas expected to contain landmines. Recently, a group of 10 girls lost their lives when they encountered a hidden mine on a routine outing to gather wood. On average, landmines claim about 42 lives every month. 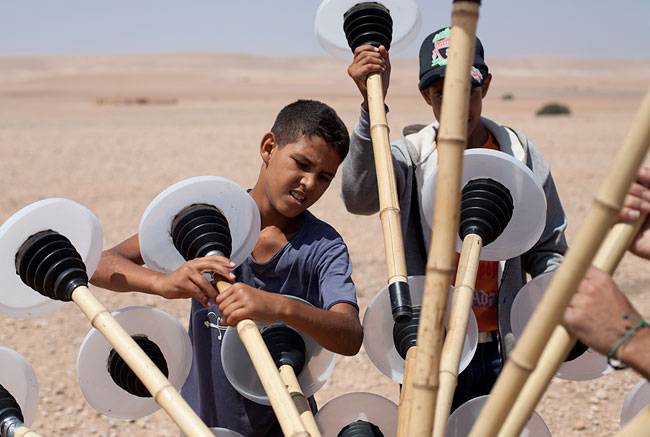 This “Mine Kafon” is a spherical mobile made out of biodegradable plastic and bamboo. It’s light enough that the wind would–in theory–push it around naturally. But it is also heavy enough to set off landmines as it rolls over them. 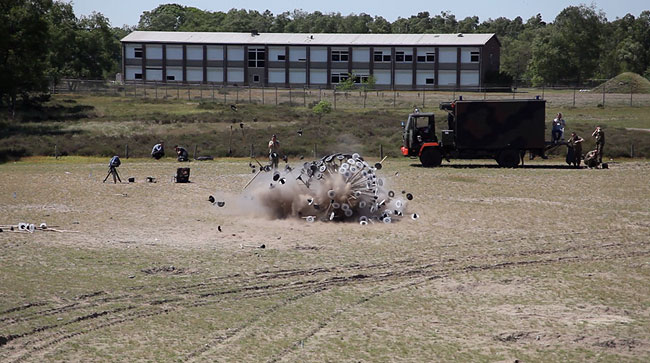 With each detonation the Mine Kafon loses just one or two legs so it could potentially destroy three or four landmines in one journey. 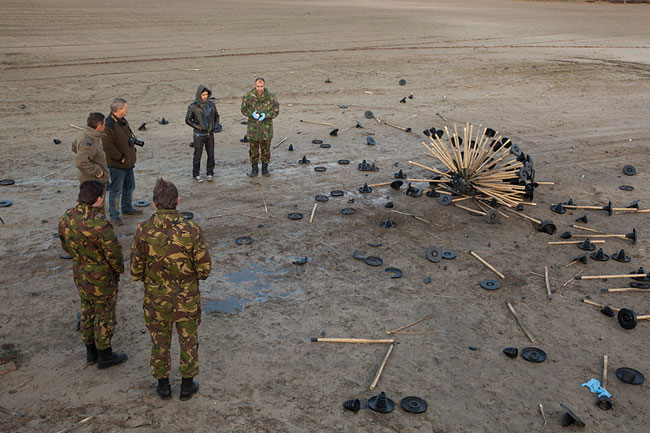 The Mine Kafon, at this prototype stage, has been exhibited at the London Design Museum, Milan Design Week, Helsinki Museum, Dutch Design Week, Lodz Design Festival and acquired by MOMA in New York. Although it’s been a great experience to have the Mine Kafon exhibited, we really designed it with the hope of deploying it in an actual minefield. 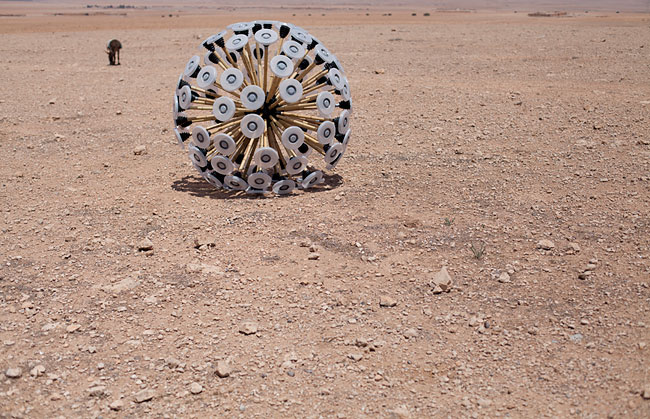 Rarest And Oldest Porsche: Yours For About $20 Million
Artist Constructs Impressive Robot Costumes And Wears Them On The Streets Of New York
Assembly: A Sense of Comfort through Proximity
Double: Wheels for your iPad
This Mind-Blowing Audi Truck Could Be The Future Of Big Rigs
The Story In Pictures Of The Giant Hughes H-4 Hercules Made Entirely Of Wood In 1945-1947
The Making of a Windfarm
Surface by Microsoft
Astonishing Artificial Limbs Created By Scott Summit
The Steam Machine Unboxing
Electric Dreams: Amazing Portraits Of ’80s Geeks
This Elderly Couple Bought Their Household Appliances In 1950s, 50 Years Later They Still Work!
This Guy Transformed A 1961 VW Beetle Deluxe Into A Black Matte Roadster
Amazing Photos Of 1949 Delahaye 175 S Saoutchik Roadster, Which Was Owned By English Blonde Bombshell Diana Dors
The Super Monster Wolf Is Here To Scare Animals Away From Farmers' Crops
Quirky And Daring: Best Soviet Concept Cars
The Impressive Cyberpunk Accessories Of Hiroto Ikeuchi
Wonderful Photos Of 1954 Chevrolet Corvair, Which Was Touted As A New Aerodynamic Design
Robot Crocodile "Longlong" in Philippines
Botanicalls Kit
Schlörwagen: The Bizarre German Car from 1939 that Was Super-Aerodynamic but Very Impractical
Lexus UX Crossover Gets Tyre Inspired By Nike Air Force 1 Shoes
VELA: Innovative Cycle Trainer
Wonderful Photos Of The Sinister 1960 Cadillac Eldorado Cars
Stunning Photos Of The Installation Process For 5G Network Equipment On The Mount Everest
A Gallery of Amazing Vintage Photos of Ferraris in the 1970s
Stunning Photos Show The Sexy Models Of 1980s Autobuff Magazine
DIY Protective LED Face Mask Warns To Stay Away And Responds To Voice
Electroluminescent Tree by Ian Hobson
Green 3D Printer Prints Living Designs From Organic “Ink”
hassani, kafon, massoud, project