With six-inch fangs and weighing in at 600lb, Saber and Janda are no ­ordinary house cats. Yet these huge Bengal tigers live in Janice Haley’s suburban garden and are treated like ordinary pets. They are fed by hand, get strokes and cuddles, and white male Saber goes to sleep sucking on her finger. Janice’s life changed 20 years ago when she spotted an advert for a tiger training course in her local paper – and two years later arrived home with her first cub. Then in 2002 she bought Janda, who is now 12.

After her first tiger died in 2007 little Saber – who was only two weeks old at the time – was introduced to the family. Janice, who lives in ­Davenport, Florida, says: “They pretty much look at me as being their mother. As far as I’m concerned they are my big four-legged furry kids. We have a very special bond – they rub my face and let me kiss them on the nose, we can cuddle with them and hug them”. After a full day of play and feeding, Janice lies down with the tigers to help them go to sleep. She says: “I don’t know of too many places where you can cuddle with a full grown tiger and we’ve been doing this with them for years”. Janice and husband David work around the clock to care for the tigers and spend all of their income on food and care. 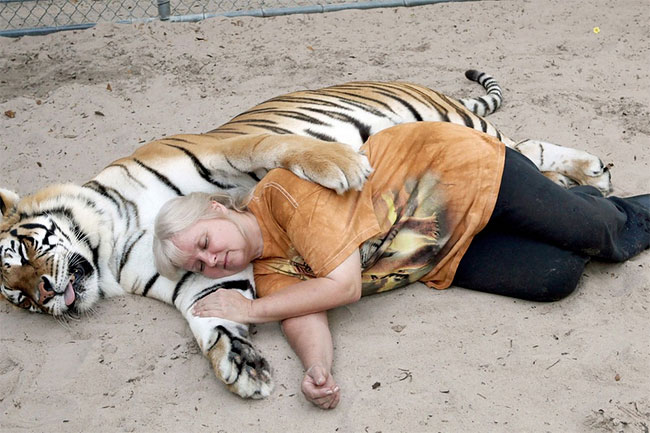 The pair are best of friends. (Photo by Ruaridh Connellan/Barcroft Media) 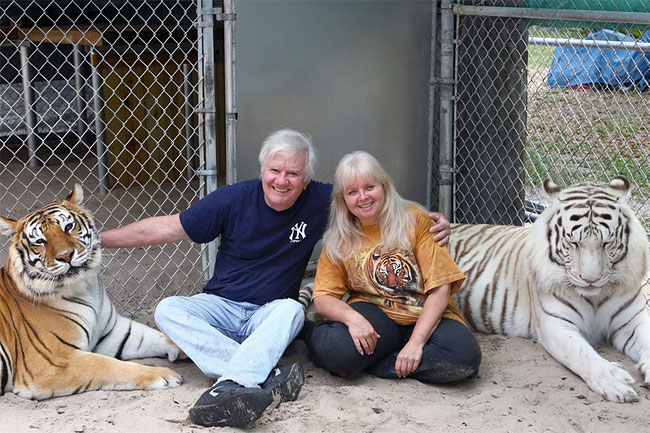 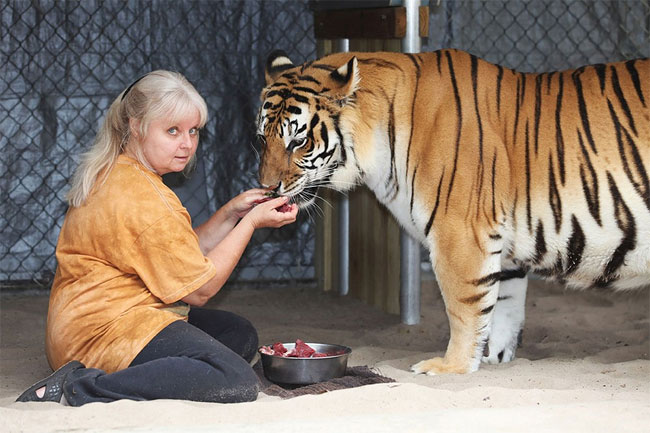 Janda knows the saying don’t bite the hand that feeds you. (Photo by Ruaridh Connellan/Barcroft Media) 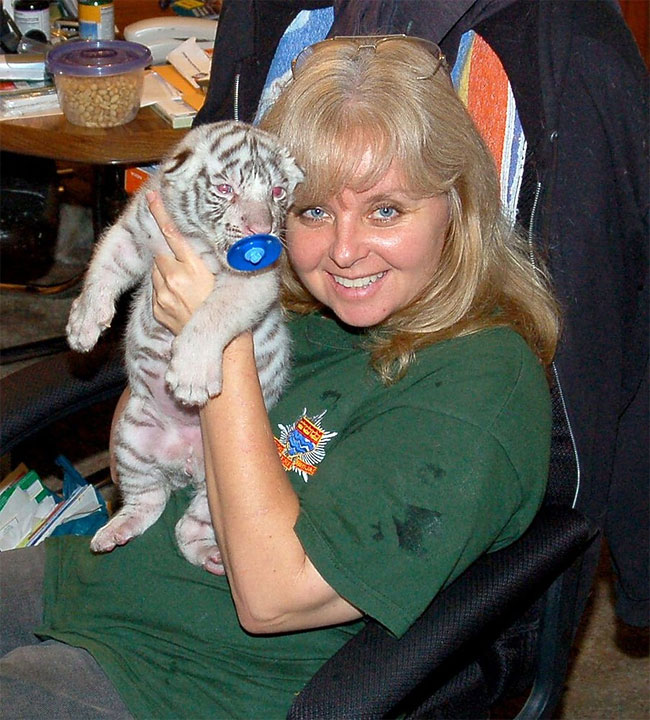 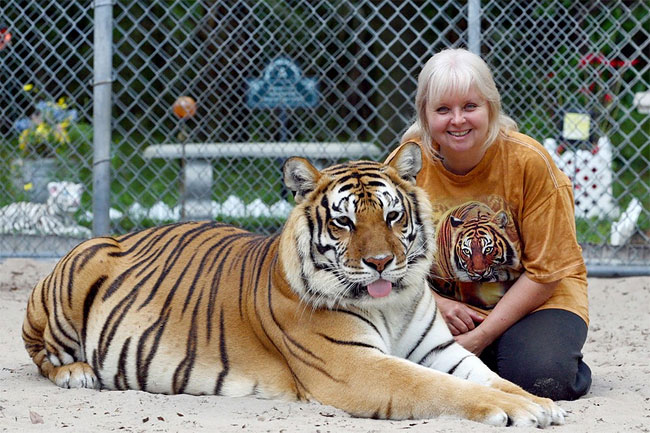 Janice lounging around with Janda. (Photo by Ruaridh Connellan/Barcroft Media) 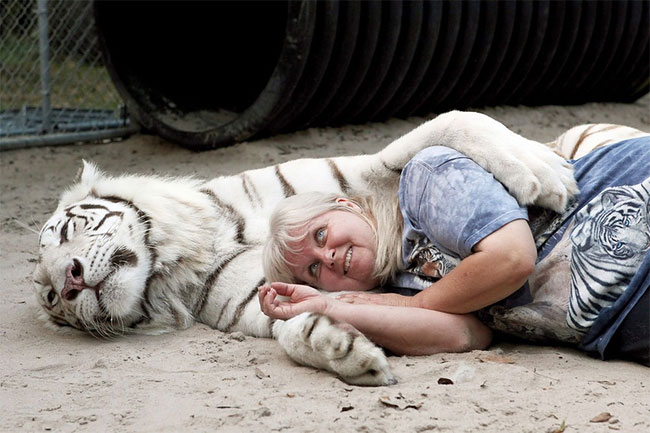 They cuddle her like she’s one of their own. (Photo by Ruaridh Connellan/Barcroft Media) 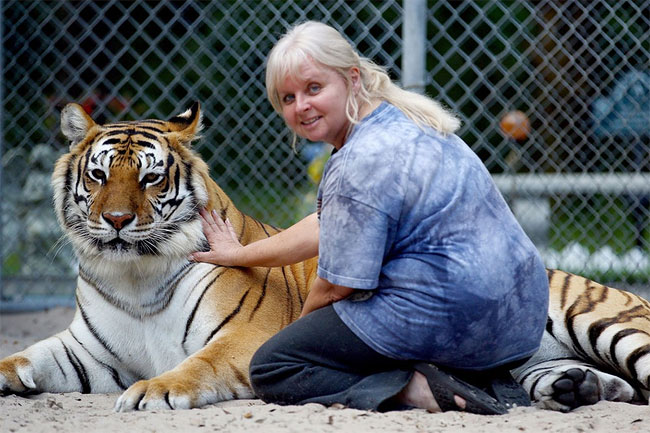 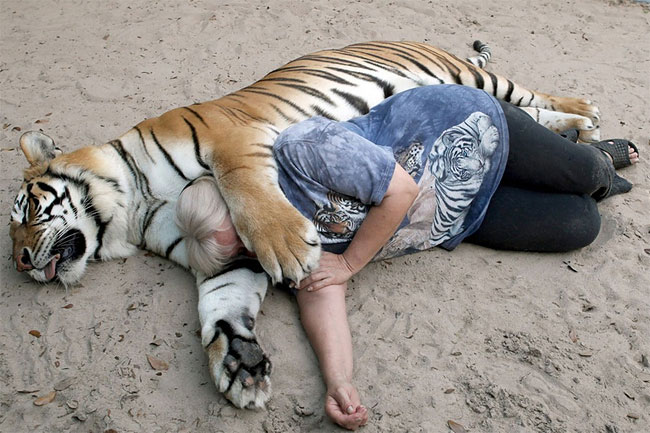 Would you cuddle a big cat? (Photo by Ruaridh Connellan/Barcroft Media)

Real Life Teddy Bear’s Picnic: Model and Her Daughter Pose in Cute Snaps with Huge Brown Bear
Adorable Sand Kittens Make Debut at Israeli Safari Park
Chinese Pet Pig And Other Unusual Pets
Diving with Manatees in Florida
Vivid Sydney: Festival Of Lights In the Heart Of Australia
Here Comes The Bear: Fairytale-Like Photos Of Russian Family Playing With A Real Bear In The Forest
Monty the Cat Without a Nasal Bone
Rare Albino Hedgehogs Babies in a Private Zoo in Moscow
This Is The Most Ridiculously Fashionable Feline Ever
Artist Paints Hyper Realistic Animal Portraits That Place Your Own Pet In Historical Settings
The 24th Annual Tompkins Square Halloween Dog Parade
Probably, this is Сalled “Lucky”...
Christmas Penguins
Neckties For Cats? That’s Totally A Thing
Adorable Cats And Kittens Flying Through The Air By Seth Casteel
Lovely Snaps Capture People With Their Cats Over 100 Years Ago
These Photos Of Surf City Surfing Dogs Will Make Your Day
This Monkey Street in Bangkok is Full of... Street Monkeys, and They're Frisky!
German Circus Uses Holograms Instead Of Live Animals For A Cruelty-Free Magical Experience
Horse in the House - German Woman Lets Horse Live in Her House Following Hurricane Xaver
Meerkats Use Photographer As Lookout
When Given Colored Construction Paper, Wasps Build Rainbow Colored Nests
We'll Just Happen To Serve Great Coffee In The Company Of Homeless Cats With Leukemia
The World's Most Super-Amazing 100% Awesome Catlendar
Mimi The Cat Cruises With Wangcai The Dog Over The Streets
The Funniest Finalists For Comedy Wildlife Photography Awards 2018
An Otter House In Japan Now Has A Roundabout – No More Underwater Traffic Jams
Photographer Captures Unique Photos Of Horses From The Underbelly
Three Little Liligers Cavort at Russian Zoo
Hilarious Pictures from the Comedy Wildlife Photography Awards
living, tigers