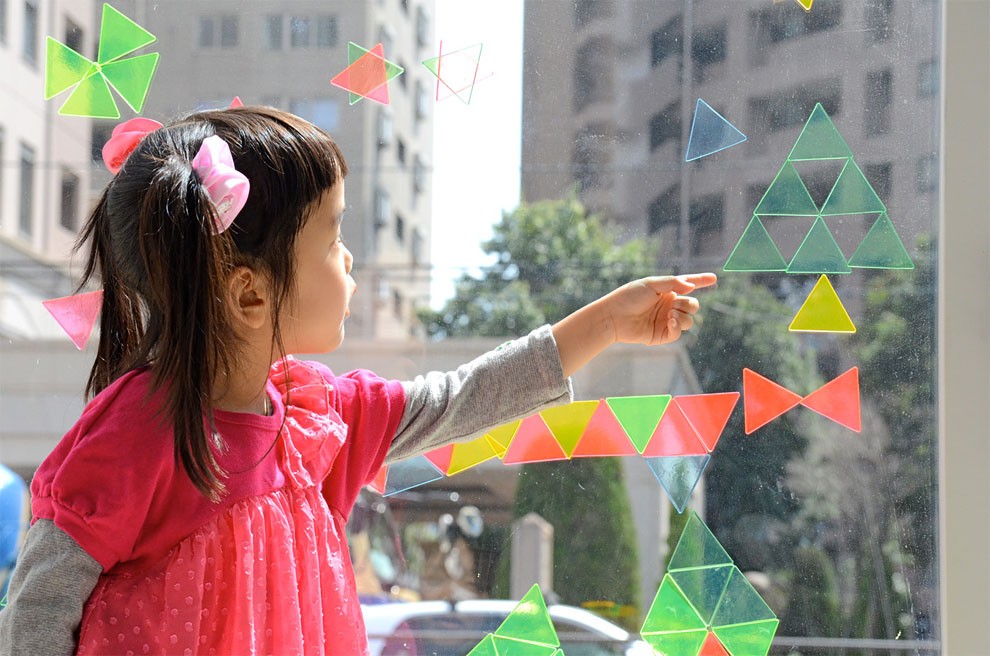 According to designer Samira Boon: “The San Kaku Mado is a toy that can be played anywhere as long as you have a window to stick it to. It consists of a single form and material and sticks without glue.” 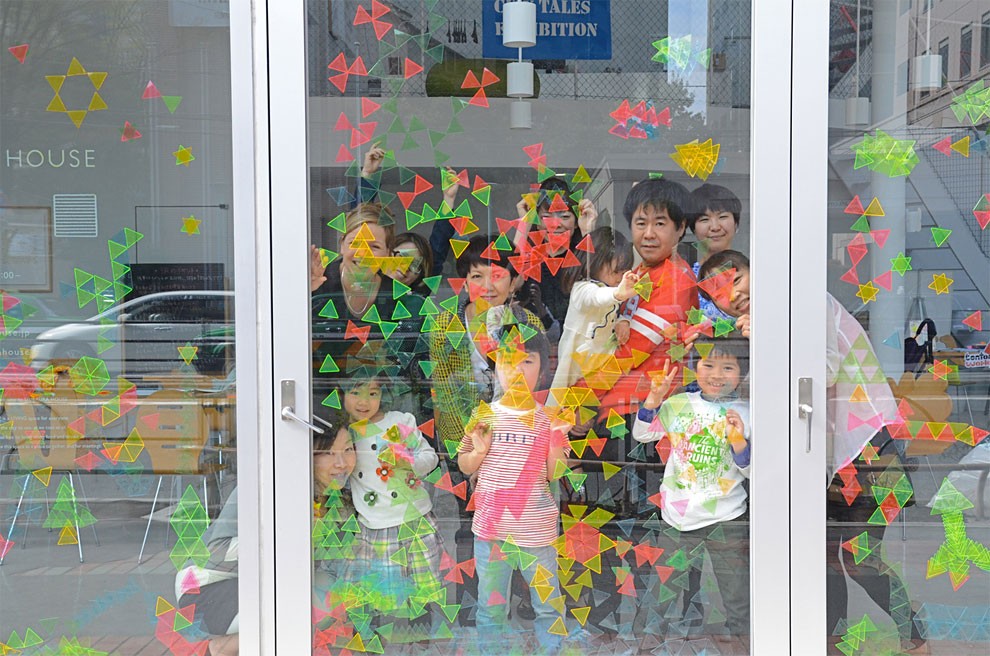 “I have made this toy because I want to help kids be creative, to teach them that they can make things themselves as long as they try. I think it is one of the most valuable lessons we can teach our children. They only need small things to make big things.” 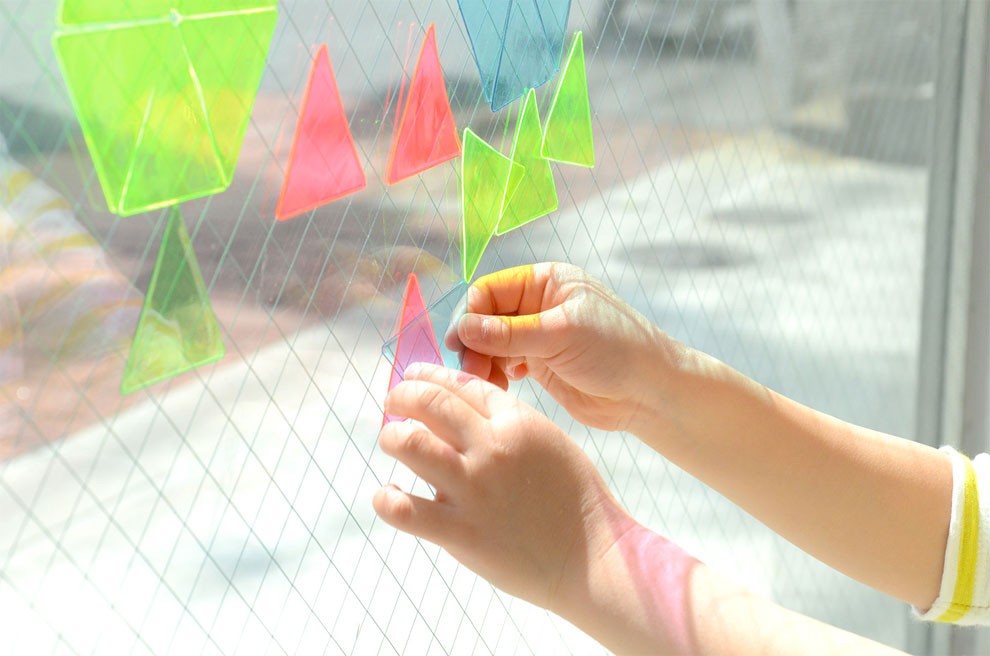 “As a designer of products I always look for new materials. One of my favourite materials is a transparent vinyl that I started working with when I lived in Tokyo. It varies in beautiful colours and it even lights up when the sun falls on it. But that is not the only beauty, the most important is that due to its adhesive properties this material sticks to any flat surface, like mirrors and window.” 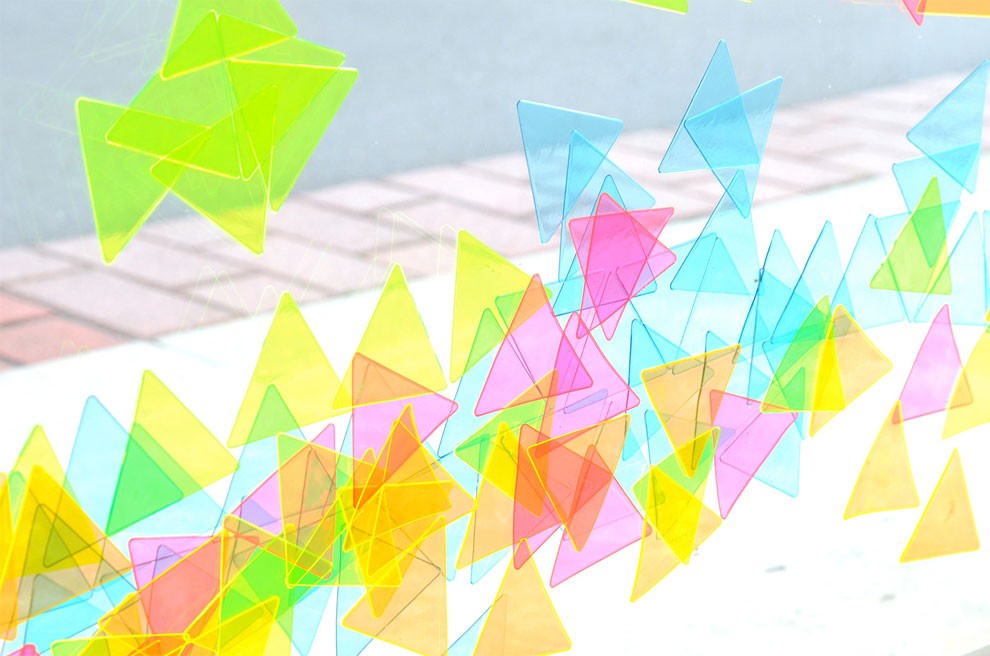 “The final design of the San Kaku Madu is very basic, it consists of a single form in only one size. Although it seems so unbelievably simple it took us a long time to come to this final design. We started off with many different forms and figures, but by trialling this we found out that all different forms and figures can be made from this single shap, as long as you use your imagination…”

“The San Kaku Mado will come in a flat transformable package that makes it easy to send to you. But once opened it becomes a box. open it. It is one of those things I learned from being a designer whilst working in Japan, put effort in everything you make. It saves parents from having it linger around the house but also makes it easier to take anywhere you go.” 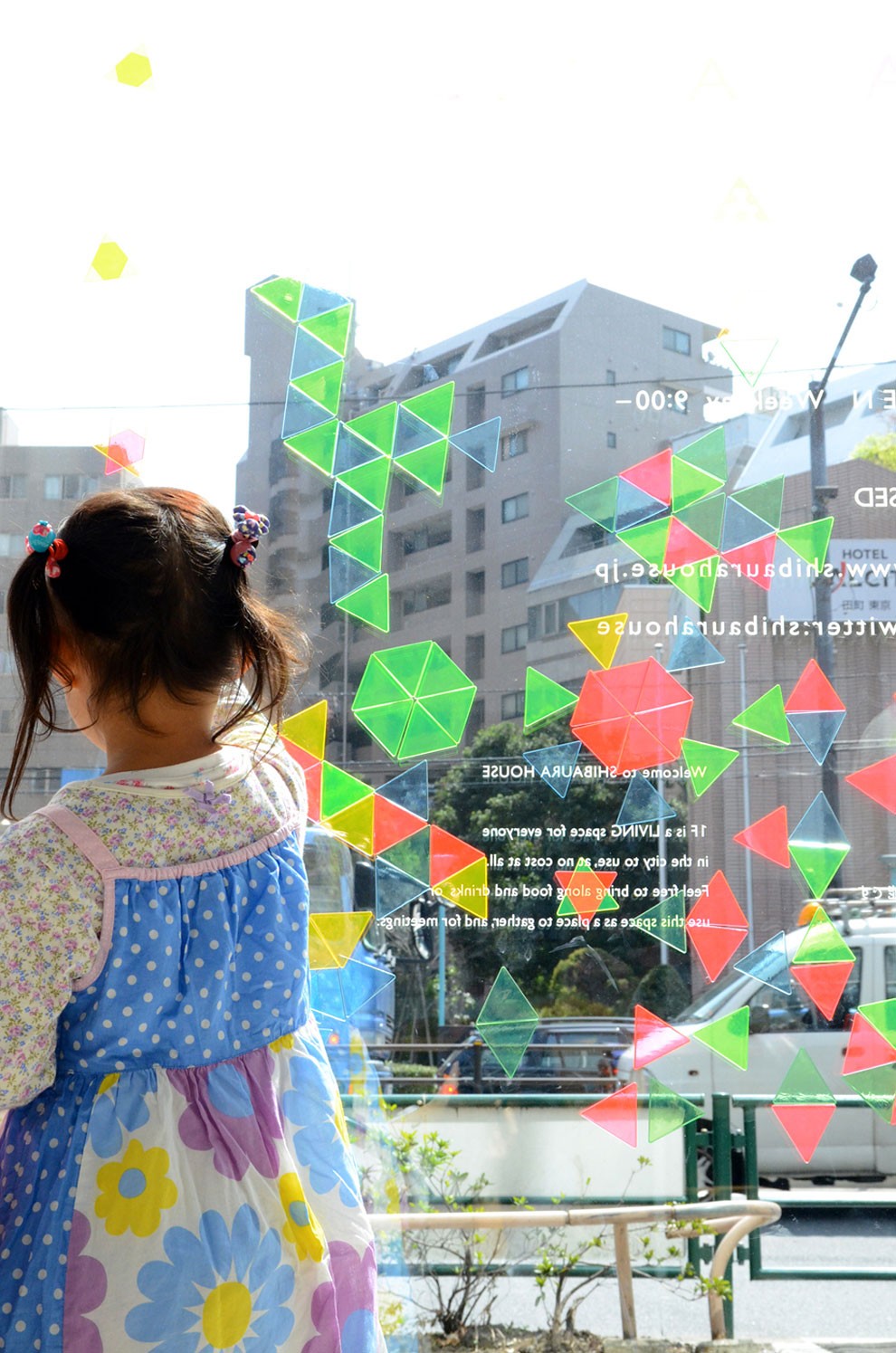 “For instance when you are traveling; the kids can use it to play on the car window. It can even give your car the distinctive look of being full of creative people, which it actually is but goes un-notable when you don’t give kids the opportunity.” 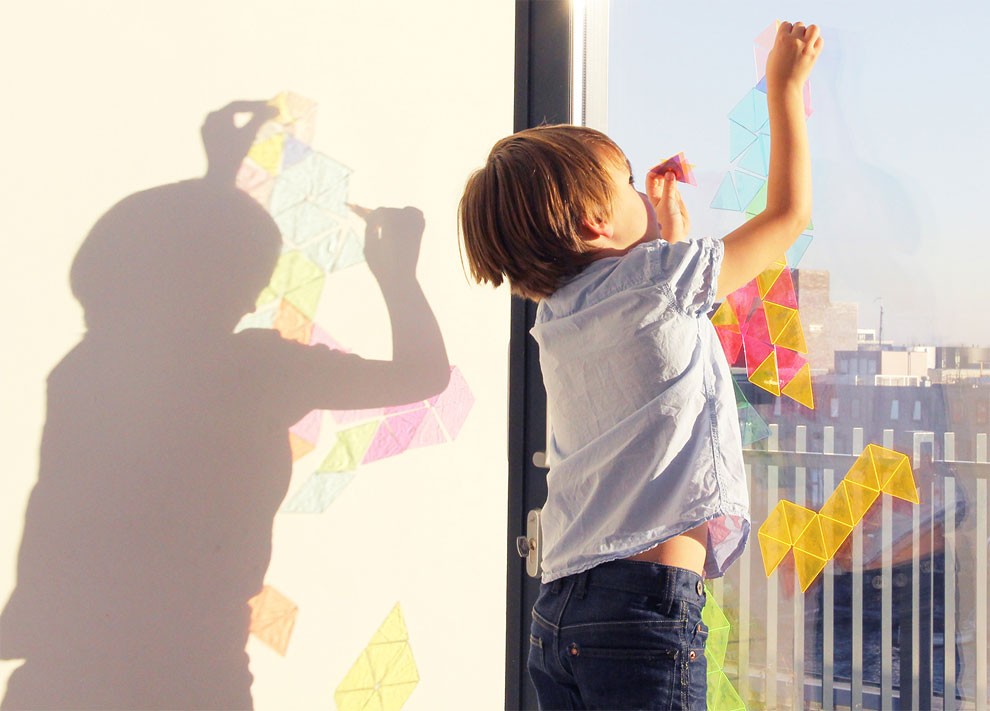 “I sincerely hope that you like and can see the potential of this toy as much as the children around me. I have come a long way and it is not so hard to produce it. This is the last step to make a large production possible and send out to all children that would love to be creative and play with it. You can help me with this, therefor I ask you to make it possible to start the window playing everywhere. Together we can show people that we can all be creative.” 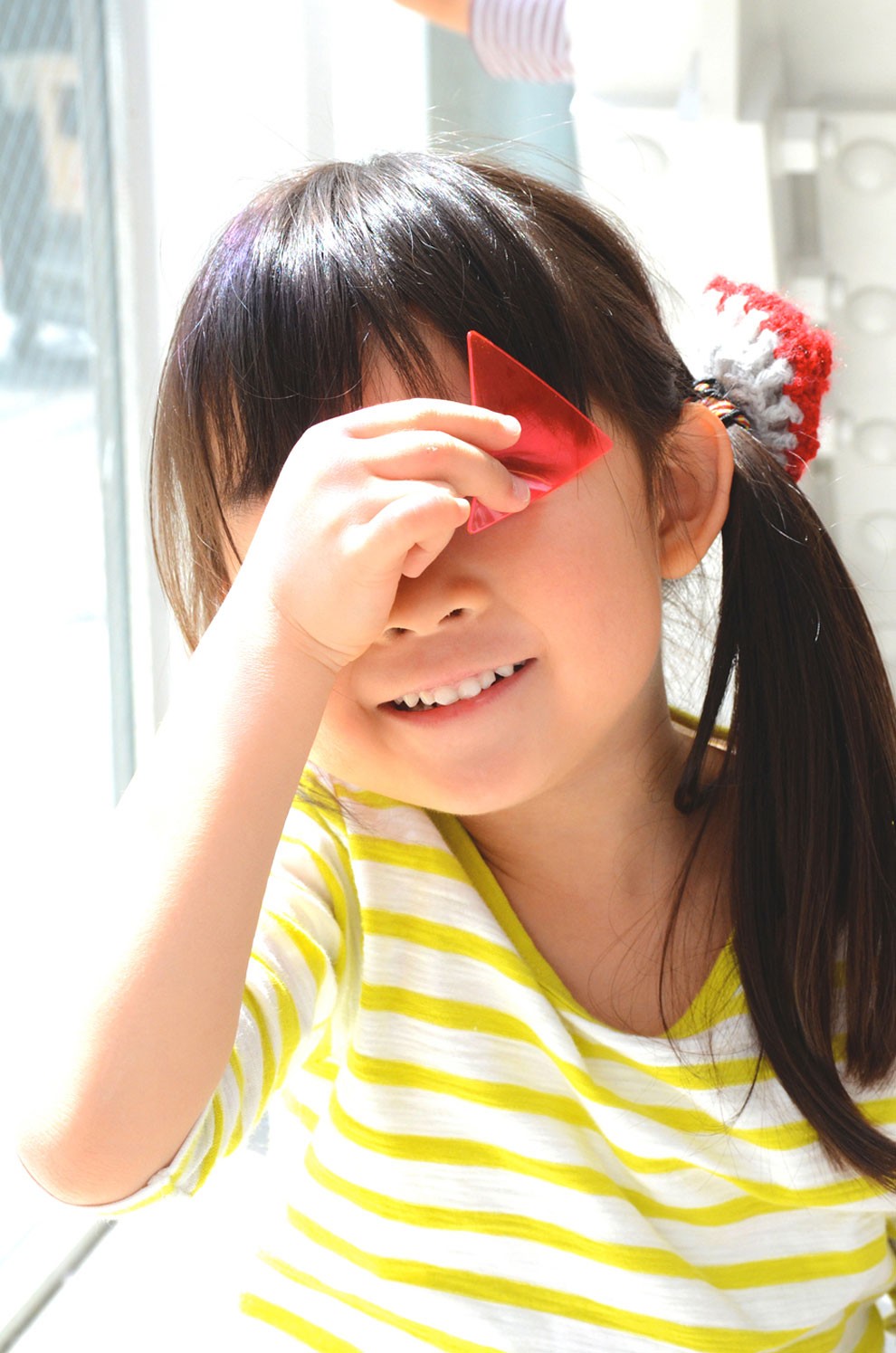 This Instagrammer Perfectly Matches Her Outfits With Art Masterpieces
Giant Cockroach Float: Is That A Cockroach In The Pool?
Sweet Bakery in Pastel Colors
Clive Madison Uses Just Wire To Make Tree Sculptures
An Artist Built a Tower in the Water to Give You a Different Perspective
Artist Designs Classic Cars Inspired By Exotic Wild Animals
Snow Cuteness or Unusual Winter Hobby: Artist Creates Tiny Snow Sculptures in Dreary Russian Neighborhoods
Hyperrealistic Snake Canes Look Like They're About To Bite You
Stylish Handmade "Book Bags" Designed To Carry Your Favorite Novel With You
Japanese Papercraft Artist Turns Whisky Packaging Into Awesome Knight Figure
Graphic Designer Turns Transit Networks Around The World Into Minimalist Maps
Food Artist Hellen Die Pays Tribute To Alien For Her Thanksgiving Dinner
The Stars And The Sea Combined Together Inside A "Starry Sea" Table By Alexander Chapelin
Chevrolet Has Another Life-Size LEGO Build, This Time Its A Silverado
People Are Recreating “High Fashion” Looks From Household Items While In Quarantine
Even The Mailboxes In Japan Are Strangely Beautiful
First Ever Jewelry Collection For Bearded Men
Disturbing Vintage Medical Illustrations That Will Shock You
These Students Put An An "Alien"-Themed Play, And The Set Looks Freakin’ Amazing
Outstanding 80s Hairstyles That You Can Almost Smell The Aqua Net Hairspray
Clay, Chaos and Urban Detritus Merge in Daniil Antropov’s Ceramic Sculptures
What Do You Know About The RIGHT Phone Cases?
Artist Amy Victoria Marsh Creates Tiny And Playful Minimalistic Ceramics
Self-Taught Baker Creates Incredibly Realistic Cakes That Look Like Bowls Of Pasta, Donor Kebabs And Junk Food
An Artist Grows Crystals On Her Fantasy-Inspired Sculptures
So You Can Now Buy a Nipple Knit Top…
This Artist Creates Gorgeous Silk Dragon Scarves
Paper Artist Creates Brilliant Origami Versions Of Pop Culture Characters
Shapereader, A Comic For Blind Readers
Of Course, You Need This 3D Periodic Table Lamp
endless, mosaic, playful, possibilities, small, window