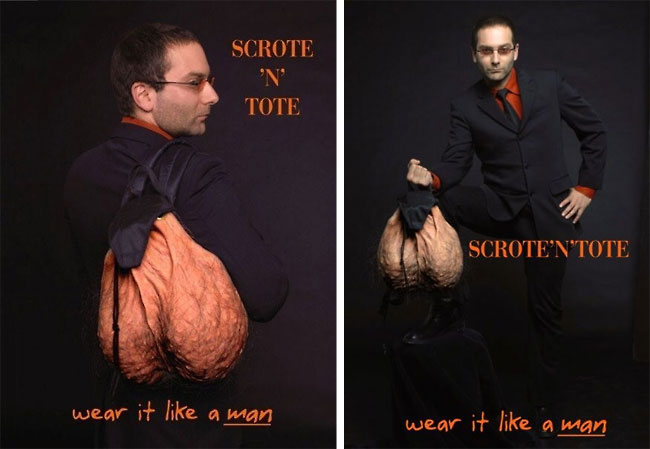 Some people wear their heart on their sleeves, but if you’ve ever wanted to wear your balls on your back, one Indiegogo campaign is going to give you that ability, for the low, low price of $69.

The ball bag, appropriately named the Scrote’n’Tote: The Satchel of Life, is the brainchild of Daniel Bitton. 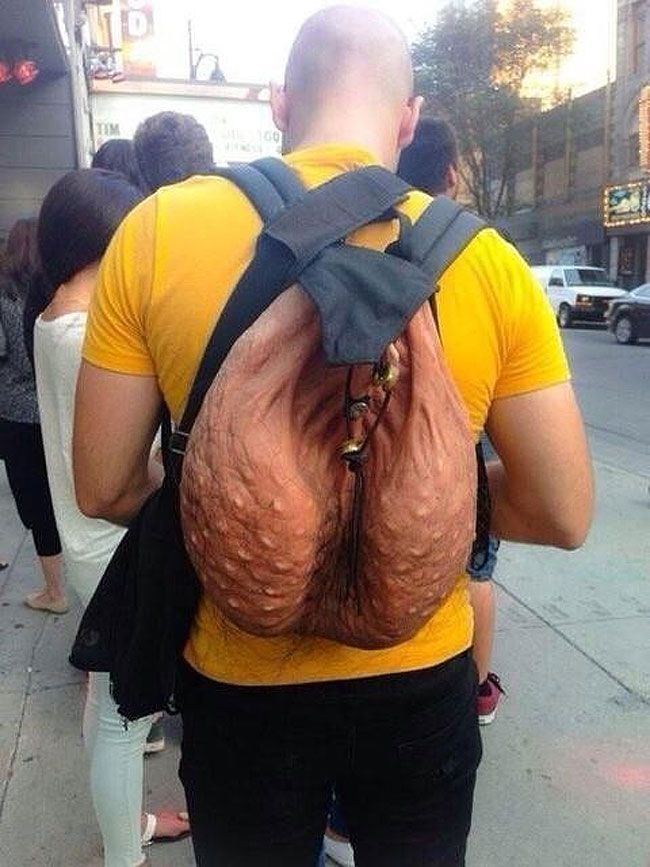 Last year, a picture of Bitton wearing his sac received some attention online, sparking thousands of like-minded individuals to think,

“Hey, I really need a backpack that looks like a hairy nut sack.” 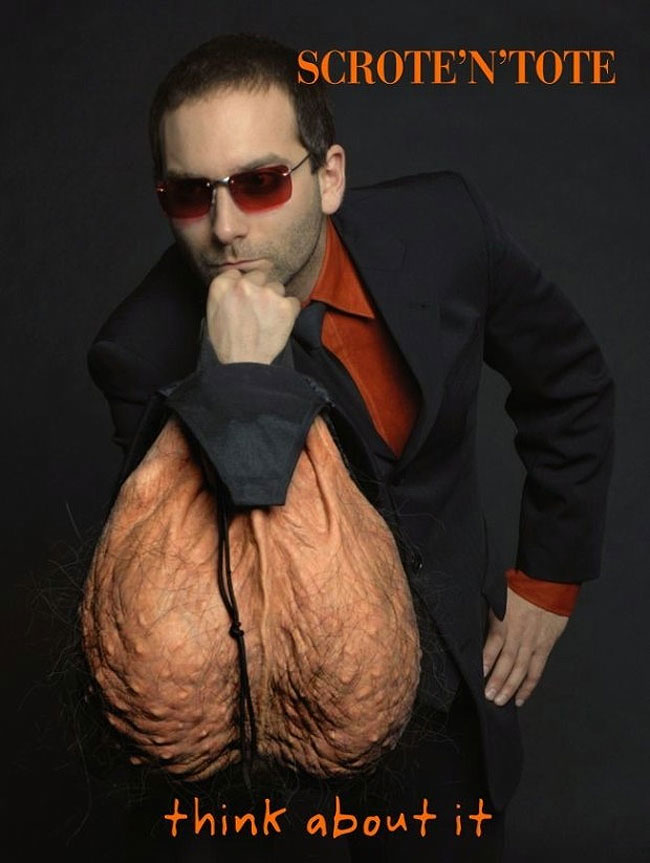 Bitton is attempting to raise $33,000 to fund production of the testicular pack, and he created this odd and creepy video to convince anyone with the cash to burn to donate to his cause.

“Although the video may suggest otherwise, this is an actual and legitimate project,” Bitton writes on his campaign page.

Bitton also uses the convincing argument “just send me the money,” and encourages his buyers to “wear it like a man.”

“God created this satchel to hold the world’s most precious cargo: the human race.” – Daniel Bitton. 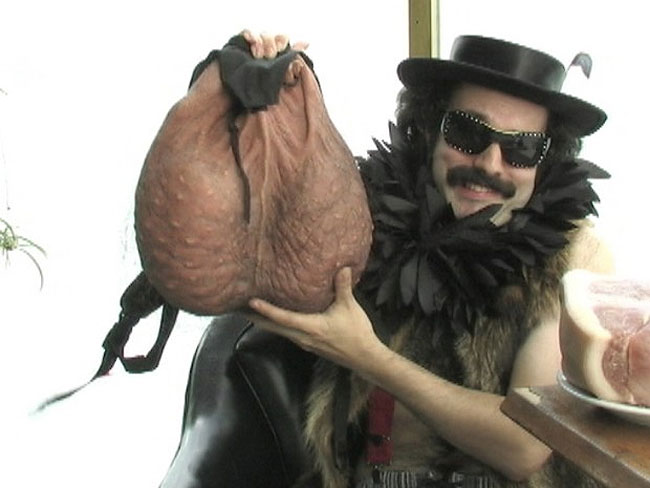 If he accomplishes that feat, the bags will sell for $120 each, but campaign backers who donate $10 now will be able to purchase one for $69. Or if you’re really feeling confident, you can just donate the full $69 today. The bags are available in ebony and ivory. 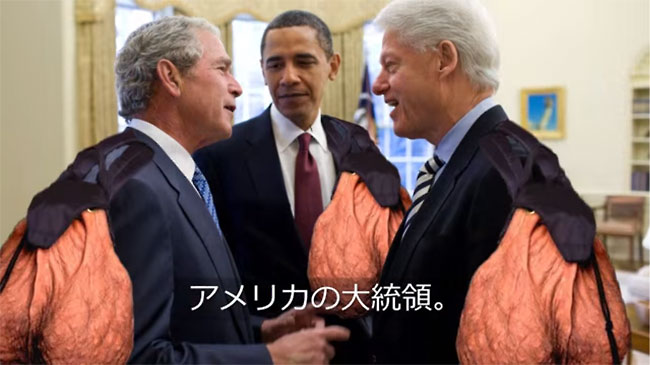 “The aim of this campaign is to solve one of humanity’s most urgent and pressing problems: the complete lack of fully functional, realistic human scrotum apparel available in the world today.”

An Artist Creates Incredible Growing Plants From PET Bottles
Rude Message To Donald Trump Appears As A Crop Circle On Stoke Mandeville Farm
Baker Comes Up With The Spookiest Halloween Pies, And Here Are Her Best Ones
Centipede, Spider And Other Creepy Animal-Inspired Handbags Created By A Japanese Artist
A Winning Costume Made From Balikbayan Boxes
People Are Cracking Up At This Barber Who Shaved A Triangle On Client’s Head After Being Shown A Paused Video
Crashed Car Randomly Gets A Golden Makeover
Before The Dirt: The Cars Of Mad Max Fury Road
You Can Now Order Your Very Own Personalized Shrunken Head Replica
Perfect Doormats For COVID-19 Social Isolation
Artist Dan Lam Crafts Colorful Art Of Neon Drips, Blobs, And Squishes
Wearable Macramé Sculptures By Sandra De Groot Serve As Soft Headpieces And Armor
Retro Birdhouse Camper Kit Makes the Perfect Backyard Outpost
This Instagram Account Collects The Ugliest Designs Ever Found And Its Followers Are Being Surprised Daily
This Floor is Made of Broken Shards of Glass and it's Amazing
Clever Tables That Create An Illusion Animals Are Emerging From Water
Artist Made A Baby Yoda Doll Entirely From Materials That She Found At Home
Artist Spends 200 Hours Making Stunning Portrait Of Bill Murray Out Of Rolled Vinyl Tape
Belarusian Company Began Production Of Wooden Bicycles
Russian Artist Carves Silver Dollar With Trap Jaws And Golden ‘Bait’ Coin
Talented Mom Hand Crafts an Incredibly Realistic ‘Rocket Raccoon’ Costume for Her 6-Year Old Son
"Swords In Rock": The Colossal Sculpture By Fritz Røed
Abandoned Church Transformed With Colorful Graffiti In Morocco
In The Victorian Era, These Strange Mortsafes Were Contraptions Designed To Protect Graves From Disturbance
backpack, crowdfunding, prompts, realistic, scrotum, unrealistic

Human Characters Interact With Extra-Terrestrial Creatures And Dinosaurs - New Gucci Campaign Inspired By Vintage Sci-Fi
Some Of The Best Creative Packaging Design You Shouldn't Miss
Fantastic 3D Laser Cut Meditative Visionary Art by Dan Schaub
Chinese Artist Uses Colorful Paper To Warn Of Danger Of Guns
Perfect Doormats For COVID-19 Social Isolation
Delightful Colorful Murals Appear On Roads Only When It Rains
The Most Amazing Wedding Dress You'll Ever See
These Cosmic Painted Gloves Are The Only Way To Make It Through Winter
Stunning Photos From The Bosch Parade, The Sailing Parade In The Spirit Of Jheronimus Bosch
This Old Man Spent 13 Years Growing A Giant Dragon In His Yard
2007 ‒ 2022 by Design You Trust. Proudly hosted by WebHostingBuzz.
Privacy Policy · Terms of Service · Content Removal Policy ❤️ 🇺🇦