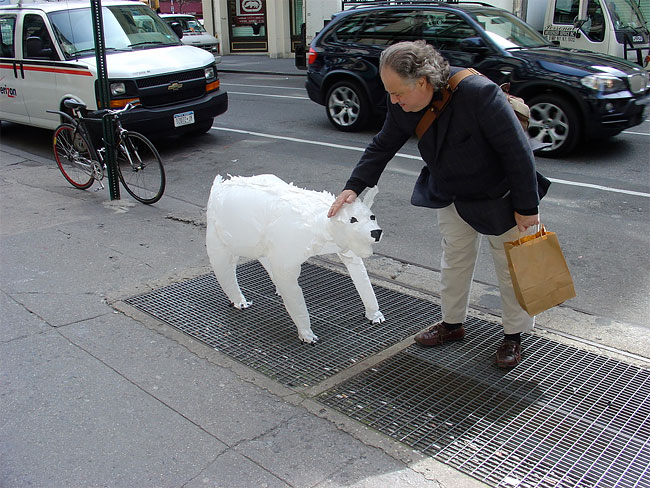 Polar bears, polar bears. Those ubiquitous symbols of climate change. Cute and cuddly, ethereal and majestic, they’re popping up everywhere – including atop subway grates on the streets of New York City.

Artist Joshua Allen Harris has created quite an online buzz with his puppy-like inflatable plastic bag polar bear: it inflates and deflates with the passing of subterranean subway trains, springing to life and then fading away in a vital commentary on global warming. 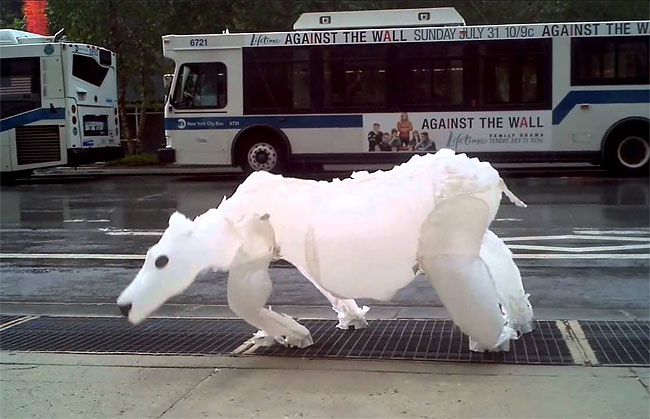 What starts as a lump of plastic slowly inflates into a giddy, shivering, gleeful mini polar bear – which then deflates back into a lump when the air runs out. Several different sites have commented upon how sad it is to watch it die over and over again. The parallels to the issues of climate change are as striking as a sledgehammer as one watches the figure of a polar bear melting out of its element. 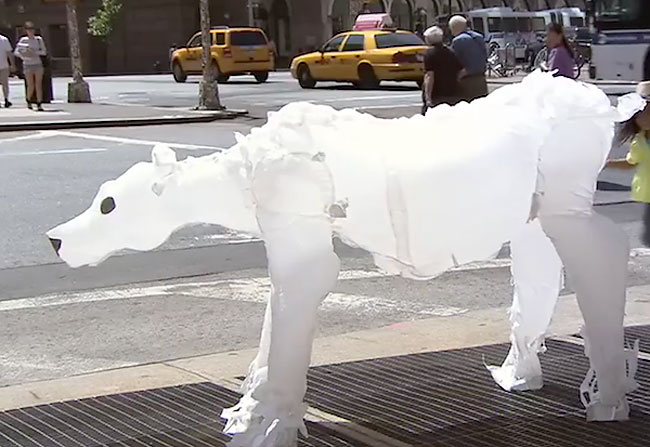 This was Harris’ first inflatable subway sculpture. He’s since become well-known for creating a variety of subway characters, including mythical and mysterious creatures that are several grates long. Below is a piece on the artist by New York Magazine.

Harris has also created a Loch-Ness monster, a centaurian figure and a crowd of giggly shapes, each exhibiting a rapid transformation of a discarded lump into an entrancing figure.

Art Installation ‘Intimate Vestiges’ – A Different Kind Of Room
Amateur Culinary Artist Creates The Most Amazing Sashimi Plating
2020 Fashion Novelties: Crocs Gloves And Ramen Handbag
Woman Agrees To 11 Tattoos In A Week All In The Name Of Art
Fantastic-looking Custom Made Steampunk Bullet Shell Chess
Tattoo Artist Andrea Raudino Creates A Masterpieces Inspired By The Japan And Pop Culture
When Architecture Meets Nature: Fantastic Giant Wooden Objects Of Henrique Oliveira
Mother Creates An Amazing Cardboard Kitchen For Her Daughter
Ikea Had A Great Reaction To Balenciaga Making A $2,145 Version Of Its 99-Cent Blue Bag
These Drawings Were Created On Snow-Covered Landscapes
Artist Shepard Fairey Adapts Obama's Hope Poster For Trump Inauguration
This Artist Uses Natural Landscapes to Color in Cutout Silhouettes of Animals
Brazilian Dentist Felipe Rossi Treat The Teeth Of Poor People
Powerful Photos Show Mermaids Swimming In A Plastic Bottle Ocean
This Artist Creates Eerie Sculptures That Look Like Victorian-Era Ghosts Emerging From Mirrors
This Crying Unicorn Candle Will Make You Shed Tears Of Joy (Or Fear)
There’s A Big Head Made From Reclaimed Wood And Found Objects Lying In A Park In New York
Edible Flower Petals Are Preserved In These Unique Lollipops
Everything Rust On This Poster In 30 Days... Except The Product
This Guy Has Built A Hobbit House In His Backyard
This Pastry Artist Creates Absolutely Beautiful Minimalist Cakes Inspired By Architecture And 3D Shapes
These Lamps Allow You To Have A Planet At Home
These Candles Have a Human Figure that Appears to Be Meditating
Russian Clock Maker Konstantin Chaykin Creates Unbelievable Joker Timepiece With Facial Expressions
artist, created, inflatable, plastic