Before Photoshop – 14 Historic Photos That Have Been Manipulated

Though photo manipulation has become more common in the age of digital cameras and image editing software, it actually dates back almost as far as the invention of photography. Gathered below is an overview of some of the more notable instances of photo manipulation in history. For recent years, an exhaustive inventory of every photo manipulation would be nearly impossible, so we focus here on the instances that have been most controversial or notorious, or ones that raise the most interesting ethical questions. 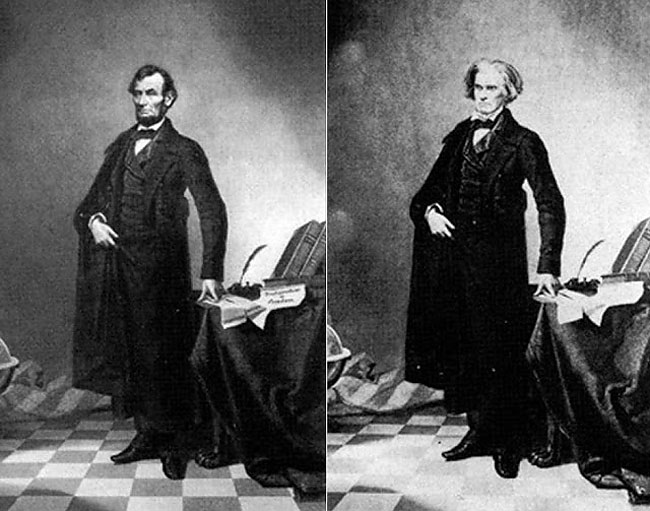 One of the most famous pictures of President Abraham Lincoln is as fact-based as the upcoming movie Abraham Lincoln: Vampire Hunter. Lincoln’s head was placed atop South Carolina politician John Calhoun’s body in this 1860 photo. Interestingly enough, Calhoun died in 1850.

General Ulysses. S. Grant on a Horse in Front of Troops, circa 1864 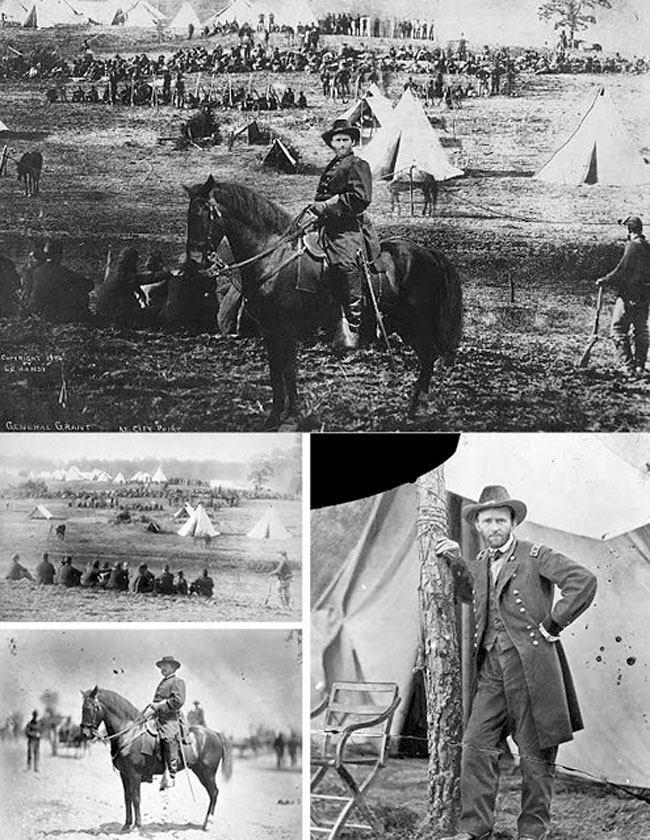 Researchers at the Library of Congress uncovered this gem after extensive detective work. The image appears to show General Ulsses S. Grant in front of his troops at City Point, Virginia during the American Civil War. Investigation now shows the image to be made of three separate prints: (1) the head is taken from a portrait of Grant; (2) the horse and body are those of Major General Alexander M. Cook; and (3) the background is of Confederate prisoners captured at the battle of Fisher’s Hill, Virginia. 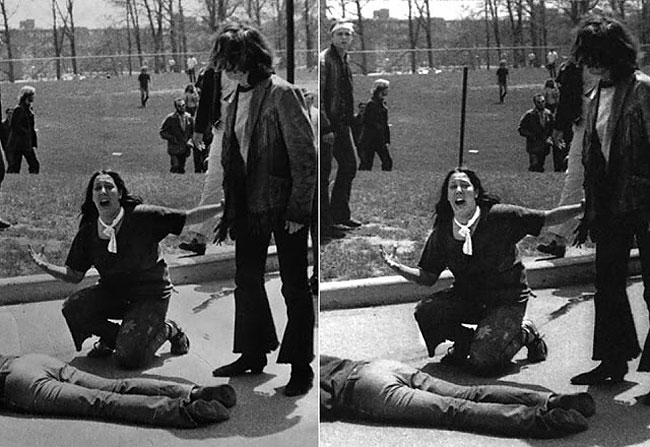 In this Pulitzer Prize winning photograph by John Filo, we see Mary Ann Vecchio screaming as she kneels over the body of student Jeffrey Miller at Kent State University. The Kent State Shootings occurred when National Guardsmen had fired into a crowd of demonstrators, killing four and wounding nine. The photo originally featured a visually distracting fencepost behind Mary Ann Vecchio’s head, but this was removed by an unknown photo editor in the early 1970’s. The modified photo then was published in Life magazine and other publications.

General Sherman Posing with His Generals, circa 1865 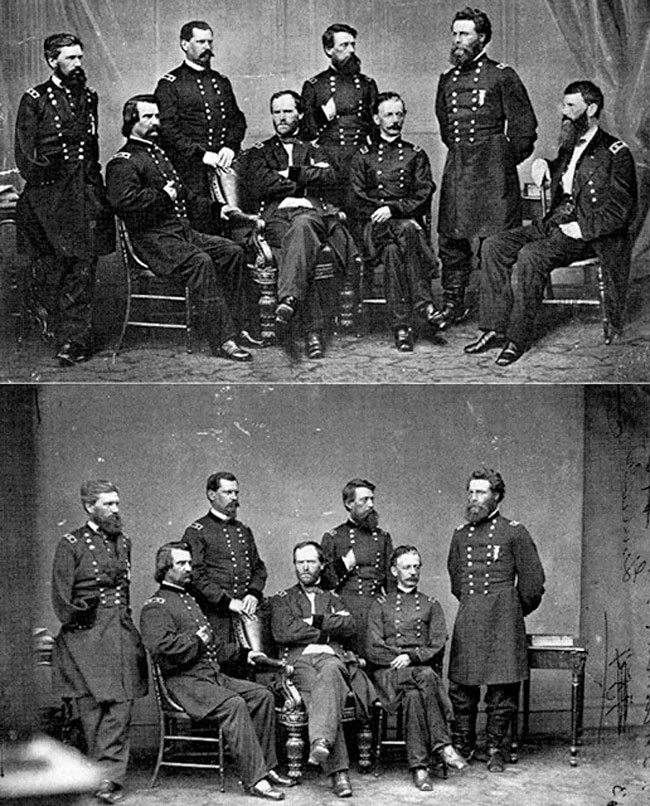 In this famous photograph taken by Matthew Brady, General Sherman is seen posing with his generals. General Francis P. Blair (standing far right) was added to the photograph as he was not in attendance for that specific shot. His image was taken from the second photograph shown, which was taken during the same sitting.

Russian Premier Josef Stalin Airbrushes Out His Enemies, circa 1930 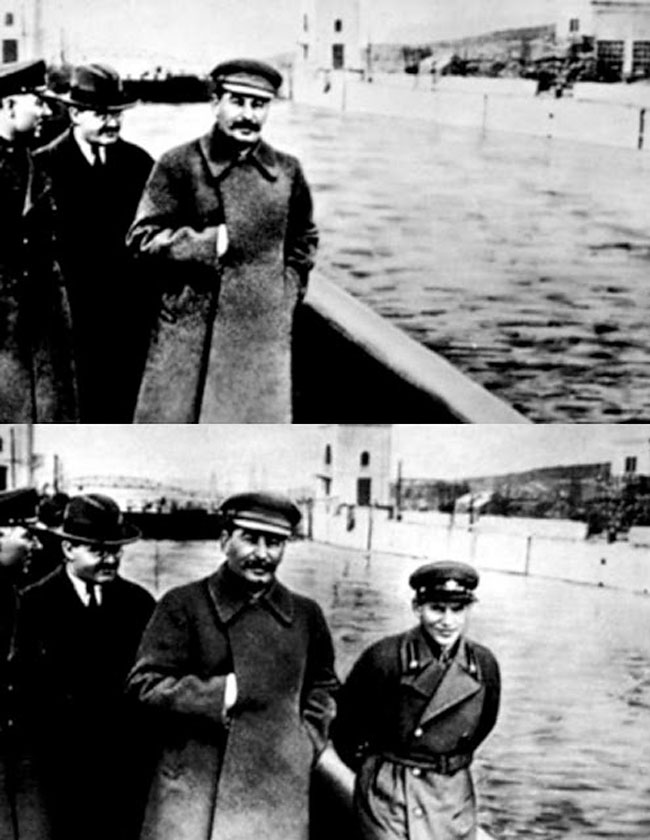 Photo-editing wasn’t just limited to glorifying or adding to actual history, it has also been used to erase history as well. Russian Premier Josef Stalin was notorious for airbrushing people out of pictures when he no longer had use for them. In this example from 1930, a commissar is out of sight soon after being out of Stalin’s mind. 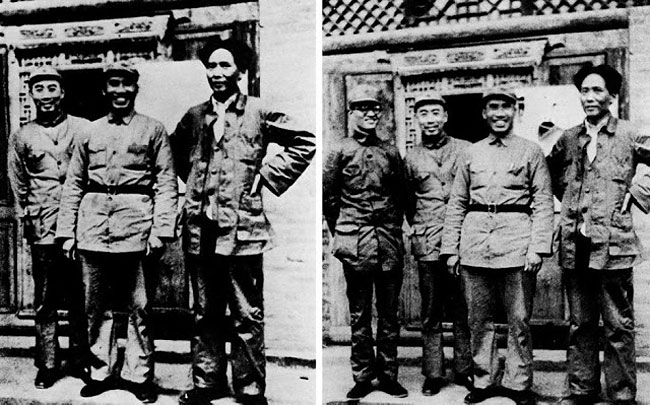 Mao Tse-tung was equally vindictive once people proved to no longer be useful to his Communist regime in China. Po-Ku, once a trusted ally, was airbrushed out of this early photo of the Chinese leader in 1936. 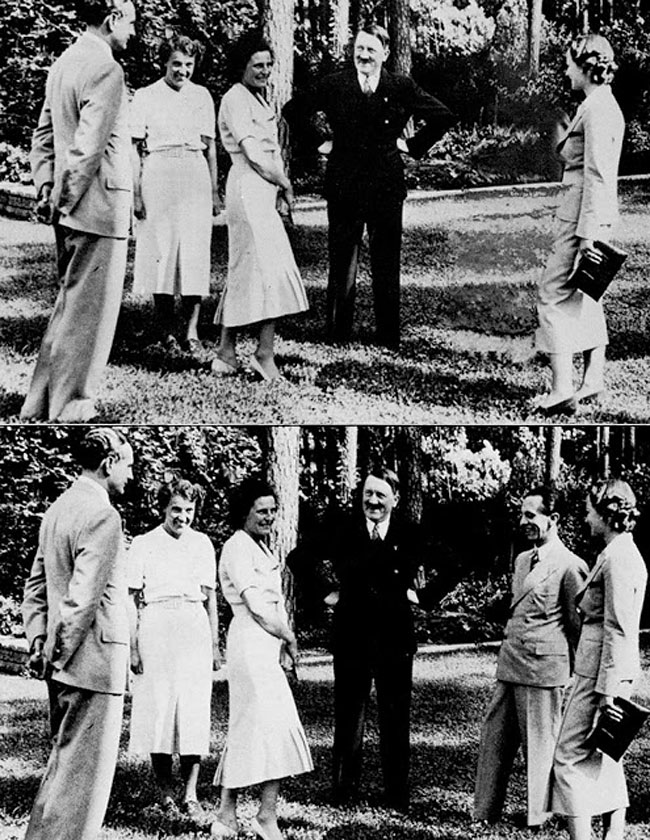 Taking cues from other famous despots, German Fuhrer Adolf Hitler made propaganda whiz Joseph Goebbels disappear from this 1937 photo. Goebbels would remain Hitler’s most trusted advisor until they both committed suicide in the last days of World War II. The bottom photo shows Joseph Goebbels in the original photo on the right. 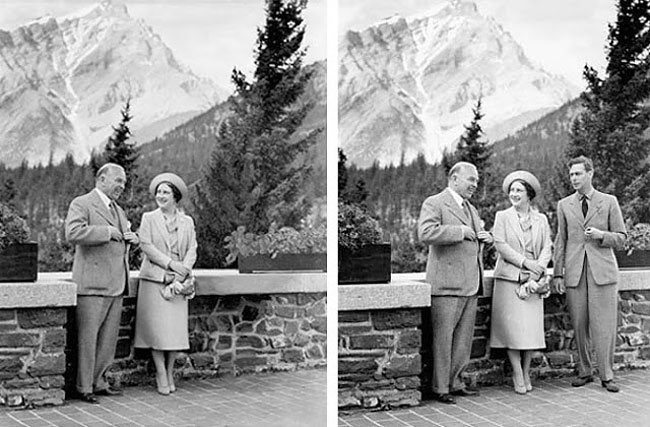 Not all people were removed to erase history, as shown in this doctored photo of Canadian Prime Minister William Lyon Mackenzie with Queen Elizabeth from 1939. While running for re-election, Mackenzie must have thought he would be more electable if King George VI was removed from this picture when it was used for an election poster. 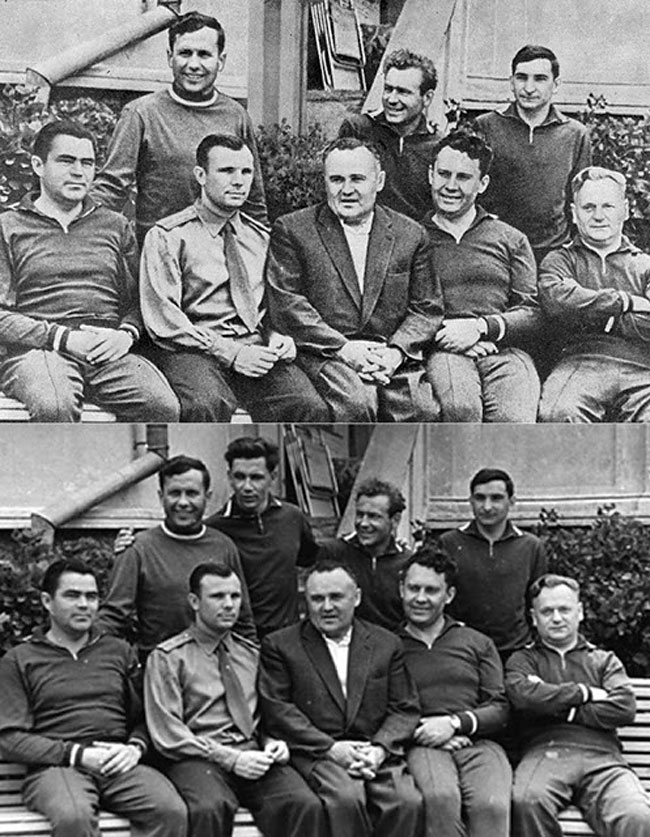 The first humans to go into space were a team of Russian Cosmonauts in 1961. They originally were to be a nine person team that was reduced to eight after Grigoriy Nelyubov was removed from both the squad and their photo for what was termed misbehavior. The original photograph, bottom, shows all 9 Russian Cosmonauts who went into space in April 1961. 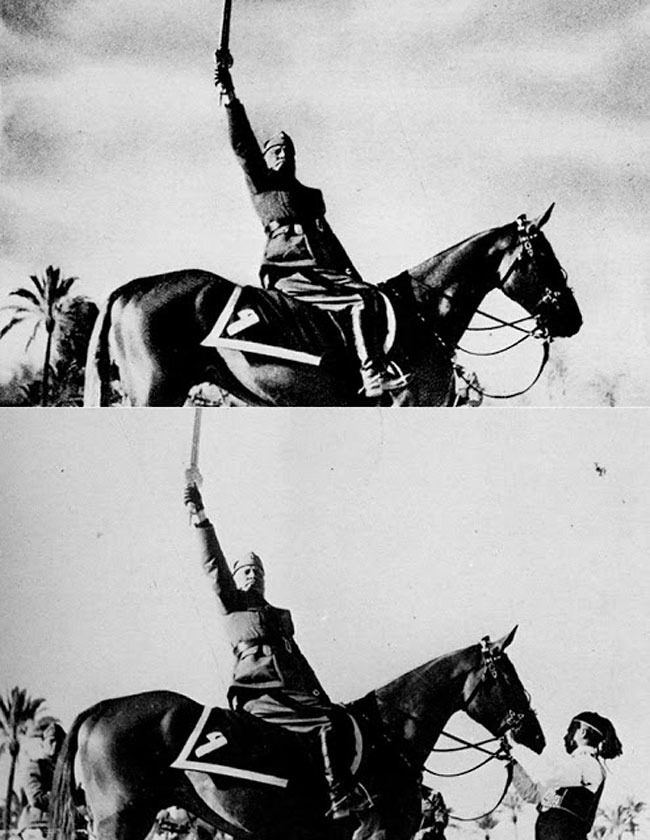 Benito Mussolini didn’t want to look like he needed help atop a horse as he triumphantly raised a sword in the air, he had the horse handler removed from this 1942 photo (bottom). 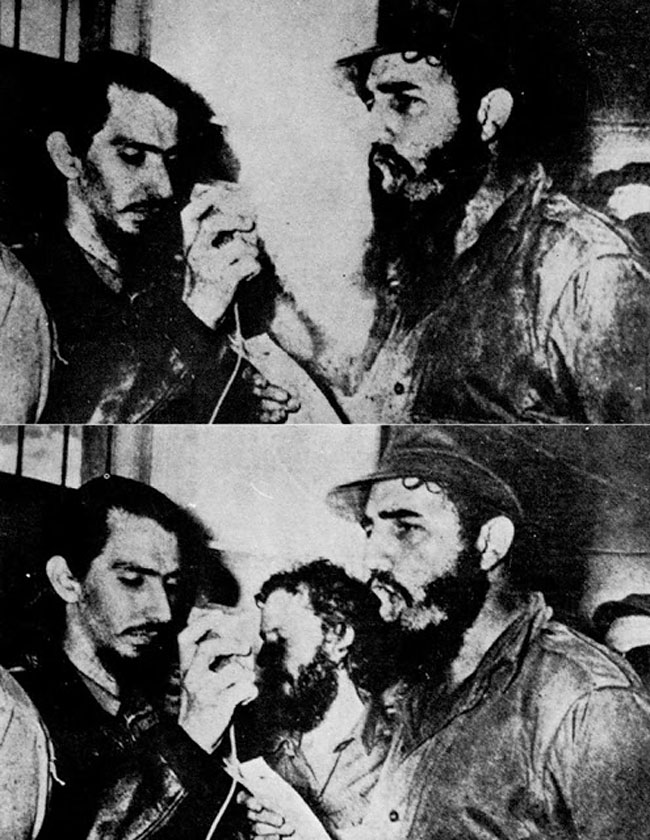 Fidel Castro (r.) approved a Soviet intervention in Czechoslovakia in the summer of 1968 causing Carlos Franqui (bottom c.) to split with Castro’s regime. Castro then decided to split with any images including Franqui. 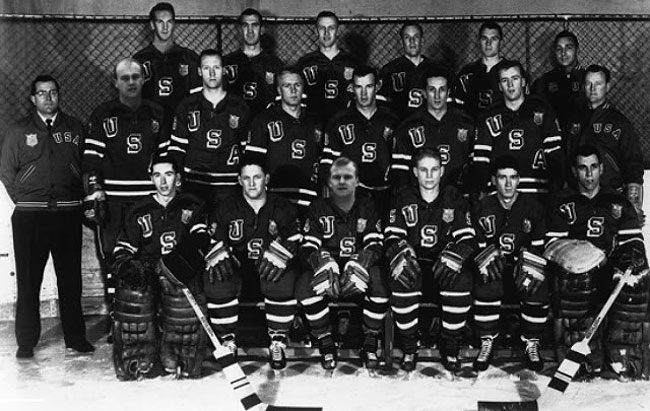 In this rather obvious tampering, the faces of Bill Cleary (front row, third from left), Bob Cleary (middle row, far left), and John Mayasich (top row far left), are superimposed onto the bodies of Bob Dupuis, Larry Alm and Herb Brooks. It’s unclear why those players were selected as ‘replacements’. The US Olympic Hockey team defeated the Soviet Union and Czechoslovakia to win its first Olympic Gold Medal in Hockey.

Bottles and Cigarettes Removed from a Meeting Photo of Willy Brandt 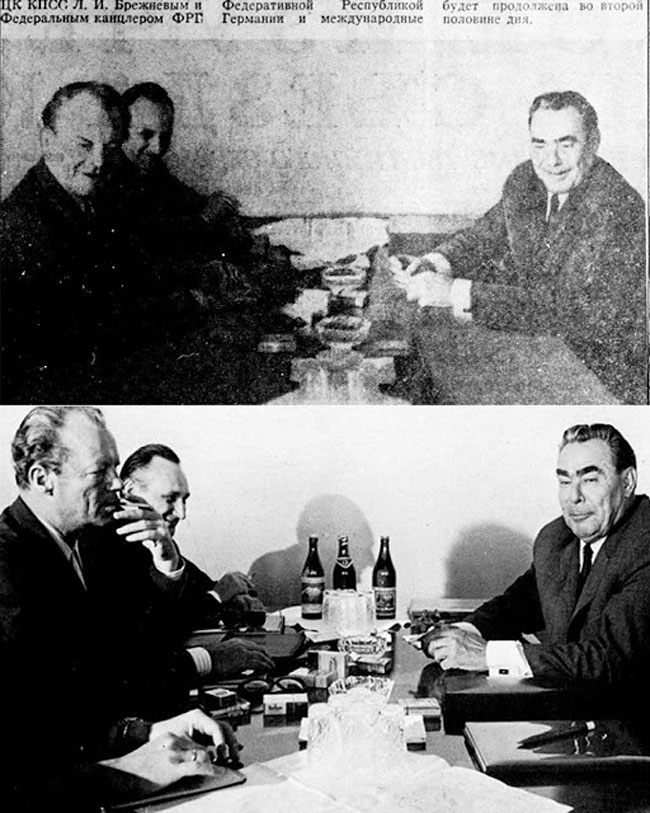 German Chancellor of West Germany, Willy Brandt met with Leonid Brezhnev, the First Secretary of the Commuist Party for drinks and smokes, which the original photo (bottom) portrays. When this image ran in the German press, the bottles and cigarettes were removed (top).

The editor-in-chief of Russian Magazine Ogoniok, removed a soldier’s watch as they raised the soviet flag atop the German Reichstag building during WWII. The reason? If you look closely, the soldier has a watch on his other hand as well. This suggests that ‘looting’ may have occurred before this photo was taken.

Fascinating Black And White Photos Capture Street Scenes Of Kyoto, Japan In 1974
Alessandro Servadei Captures Stunning Photos Of Abandoned Industrial Landscapes In Australia
Stunning Black & White Pictures Of Yhe Louvre And Its Visitors From Between The 1960s And 1990s
Atkins CIWEM Environmental Photographer Of The Year 2016 Shortlist
Instagram Account “Influencers In The Wild” Exposes People Who Are Willing To Do Everything For A Photo
Ready To Escape Whenever You Are: Moody And Cinematic Street Photography By Billy Dee
Not in Your Face
Photographer Joaquín Lucas Has Created A Colourful Universe, Inspired By Wes Anderson’s Colour Palette
NASA Captures New Magnificent Images Of Galaxies
Kristen Stewart, Emma Watson & Indya Moore: The First Look On The Pirelli's 2020 Calendar
No One Knows Who Took These Superb Hand-Colored Albumen Prints Of Japan In The 1890s
Turkish Photograher Gül Yıldız Captures Minimal And Atmospheric Black And White Urban Scenes
Kazakhstan Is Photoshopping Their Leader’s Photos And They Are Not Even Trying To Be Subtle
"Detached, in Harmony": Artist Taking Conceptual Photography to New Heights
The Line - Aftermath
Cock And Balls: A Photo Study Of Rock Gods’ Packages In Very Tight Trousers
How to Cook DIY Sous-vide Steak
20 Weirdest Images on Google Street View
"The Agony & The Ecstasy": Wild Photos Of Young Lovers Getting Off With One Another In The 1990s
Abandoned As A Baby Due To Albinism, Xueli Grew Up To Become A Vogue Model
"Underwater Knee-High Girls": A Pphotography Book Devoted To Ladies In Knee-High Socks, In Water
Propaganda Pictures Of The Vietnam War From The Enemy Side
Photographer Captures American Apparel Ads in their Gritty Natural Environment
Marvelous Dreamlike Portraits Of Redheads With Red Foxes By Alexandra Bochkareva
before, historic, manipulated, photos, photoshop

The Daily Adventures of a Strange Soul
Stunning Photos Showing NYC Subway Cars Being Dumped Into the Ocean
Amazing Photos Awarded By The Sony World Photography Awards 2018
Pizza In The Wild: A Surreal Photo Project By Jonpaul Douglass
Photographer Captures The Power And Magic Of The Human Body In Motion And The Spirit Of Dance
Before the Photoshop Era, Here Are What Manipulated Photos Looked Like in the Early 20th Century
Candice Swanepoel for Muse, Summer 2012
Photos Of Beautiful US Marine Wives on “Jane Wayne Day”
Before Digital Camera Popularity: Studio Portrait Photos Of Beautiful Women In The 1980s
"Hobbiton": Beautiful Swiss Countryside By Martin Rak
2007 ‒ 2022 by Design You Trust. Proudly hosted by WebHostingBuzz.
Privacy Policy · Terms of Service · Content Removal Policy ❤️ 🇺🇦