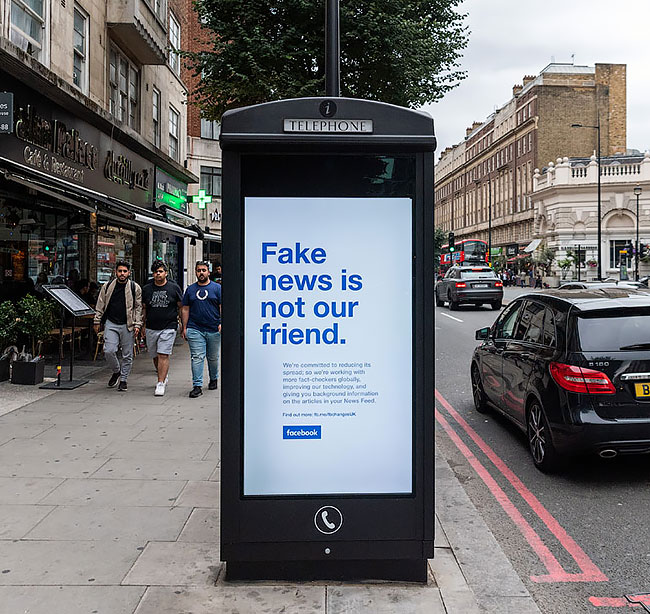 Following the Cambridge Analytica scandal, Facebook has worked hard (and spent a lot) trying to fix its image with digital, social, but also OOH ads. In London, a street artist thought he could make them more “honest.”

A mystery street artist has tampered with billboards across London to share some interesting messages about fake news. Photos circulating online show the bus shelters parodying a series of Facebook advertisements. Messages like ‘fake news is not our friend, it’s a great revenue source’ are trying to dupe commuters into believing they’re actually from the social media giant.

A Twitter account called Protest Stencil shared photos of the ads and said they are ‘really getting around’.

“Fake news is not our friend, it’s a great revenue source.”

“Data misuse is not our friend, it’s our business model.”

While we don’t have to agree with the “improved” message, it certainly shows that for many users, trust is simply not there anymore. 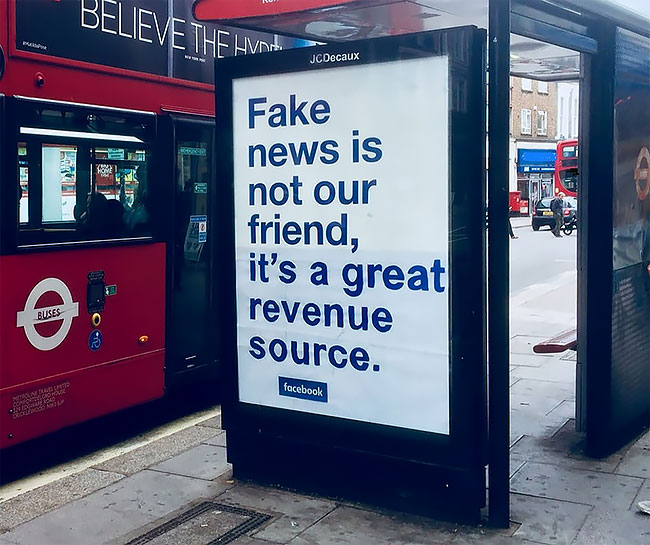 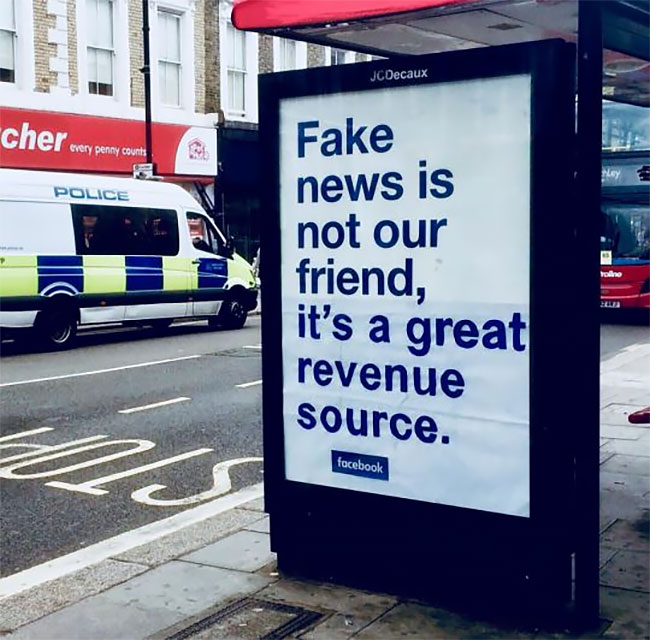 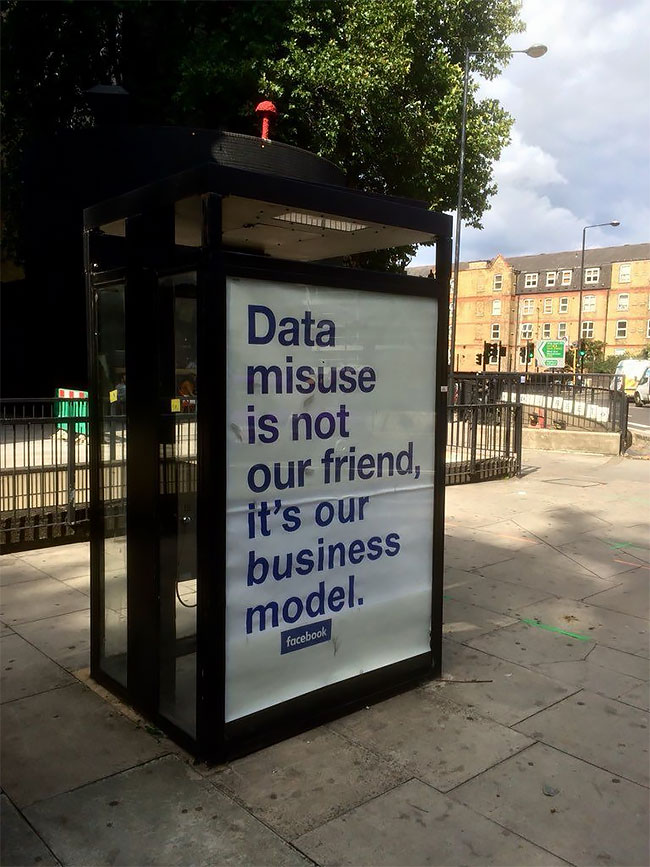 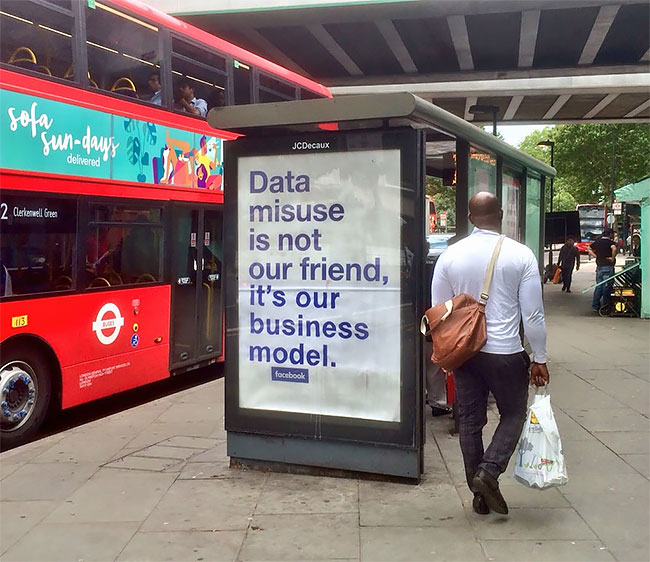 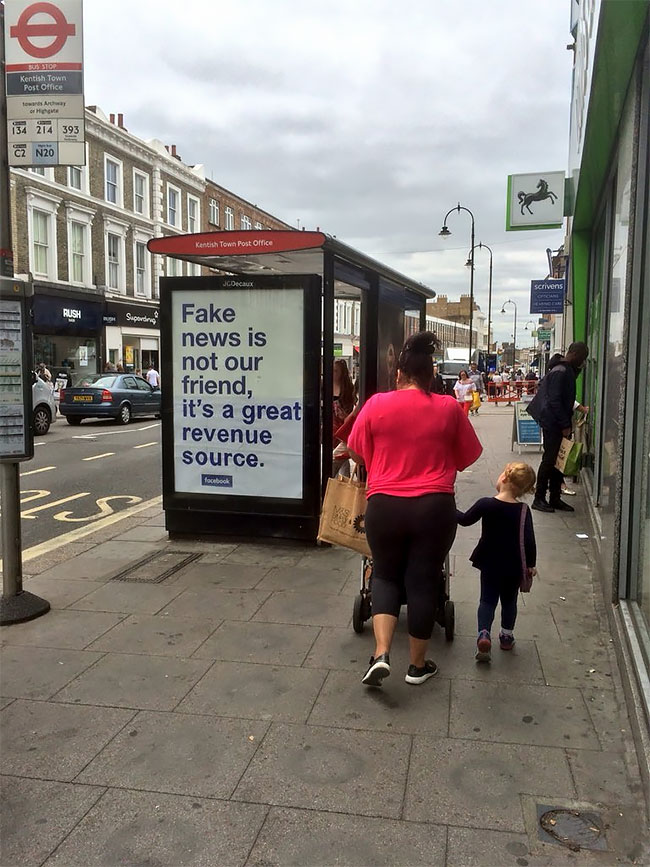 Stunning Photos From The Hair Freezing Contest Of Takhini Hot Springs
Artist Francesco Sambo Combines Humans With Beasts In Surreal Photo Collages
"The Last Of Us" Concept Art By John Sweeney
Someone Recreates 65 Metal Album Covers With Characters From The Simpsons And It’s Hilariously
Swarms Of Hybrid Creatures Flow Like Liquid On Walls And Buildings By Pantónio
The History of...
Artist Sums Up Our Everyday Lives In These Humorous One-Panel Comics
"If One Can Anyone Can All You Gotta Do Is Try": Powerful Art Works Of Faith Ringgold, A Painter, Author And Civil Rights Activist
New Wonderfully Witty Animal Comics by Liz Climo
“Food, Sex And Irony”: Superb Artworks By Enrico Robusti
This Fashion Santa Is Blowing Up The Internet With His Dashing Looks
Arresting Illustrations With Pleasing Textures And Details By Eva Bee
Monsters from Outer Space: Glorious Covers for German Sci-Fi Magazine "Terra"
10 Famous Movie Titles Written Using Negative Space
Scary Client Feedback Designed As Classic Horror Movie Posters
"Light & Shadow": Dreamy Illustrations By Lê Long
Black: Gerardo Zaffino's Macabre Comics
"What If Orthodox Priests Became Cosmonauts?": Artist Unites Two Russian Pillars In His Paintings
Paint-Ception: This Artist Painted Himself Painting Himself In An Incredible Recursive Self Portrait Series
Stunning Black and White Celebrity Photographs Taken by Dennis Hopper in the 1960s
This Guy Used AI To Colorize Hollywood Stars Of The Golden Age And Here's What He Got In Only A Few Seconds
Design Works of Elena Lazutina
Artist Austin Light Makes Funny Collages From Boring Stock Photos
Keep Your Smartphone Charged with The PowerBar
You Can Now Get Cat Sticker To Cover Up Racist Graffiti You Find On The Streets
Stupid Cat Drawings On Daily Basis
35 Perfect Reasons To Love New Yorker Cartoons
"Client Error": The Superb Digital Artworks of RETOKA
Italian Illustrator Shows How Loving And Friendly Cats Can Be
Global Brands Redesigned as If They Were from The USSR
artist, billboards, facebook, improved, london, street