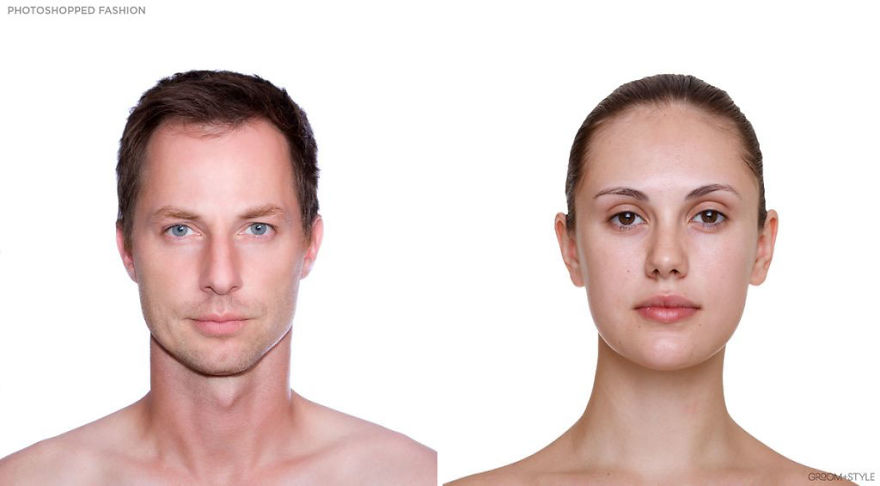 Have you ever wondered what you might look like and dress like if you lived in a different part of the world? The way you look now is almost certainly influenced by the culture and trends of where you live, even if you would hardly class yourself as a dedicated follower of fashion.

To find out how differently people all around the world style themselves, Groom+Style sent generic headshots of a man and a woman to fashion experts and graphic designers from 27 countries asking them to transform the people in them to look like trendy local fashionistas.

And the results are fascinating.

While in Costa Rica, the emphasis on natural beauty means that the photos are hardly changed at all, the Belarusian designer turned the male photo into a suntanned action hero, complete with a cigar. Meanwhile, in Israel, the current fashion trends seem to be for men to look like Chris Pine and women to look like Mariah Carey.

You’ll certainly come away with a new perspective on Lithuania, where nose rings seem to be very ‘in’ nowadays for both sexes, along with a Bohemian style and serious facial hair. Beards of all shapes and sizes are generally still on-trend, from the full bushy ones in Namibia to the more sculpted and moisturized stubble in Mexico and Australia.

Speaking of hair, while the man’s style only varies slightly, his female counterpart undergoes many transformations around the world. Hair up, hair down, in buns, ponytails, wearing a variety of headgear… it’s all going on.

Some of the more subtle changes are the most interesting, where eyes and even facial structures seem to have been tweaked, while there’s a lot to learn about the countries from some of the backdrops that been added.

Now that you’ve seen them, which country’s style do you think would suit you the best? 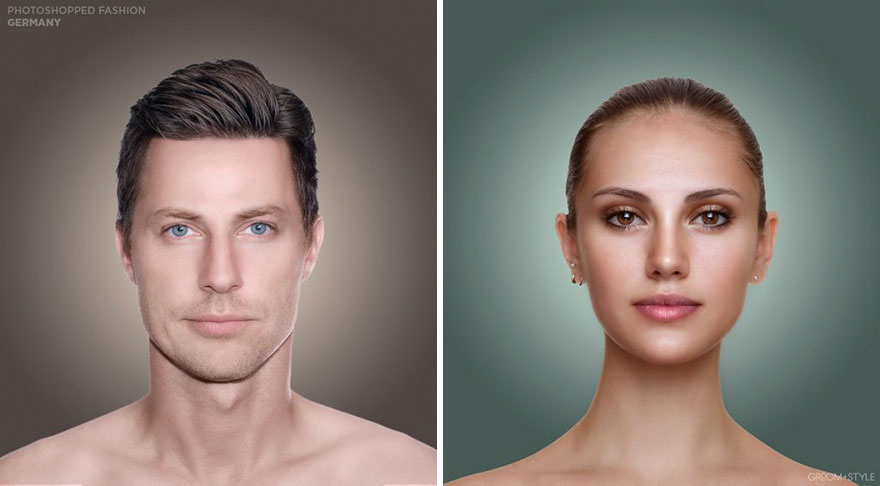 Tiny earrings are a big trend in Germany right now, and our German model’s hair is kept tied back to show her ears, face, and makeup. The designer also made the models look more ‘relaxed and friendly’ with some reshaping around the eyes. 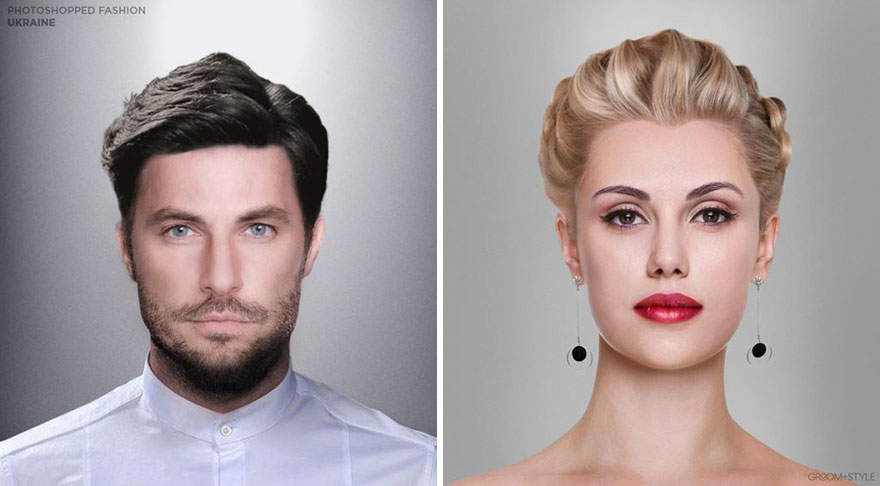 Our Ukrainian images have been made up in a hipster style, which designer Yana believes is highly on-trend at the moment: short, dyed blonde hair for women and a ‘sloppy’ beard and stylized hair for men. The woman’s earrings, however, are more timelessly stylish. Yana makes the good point that men mostly accessorize below the neckline. She would have liked to add a watch, large rings, and tattoos. 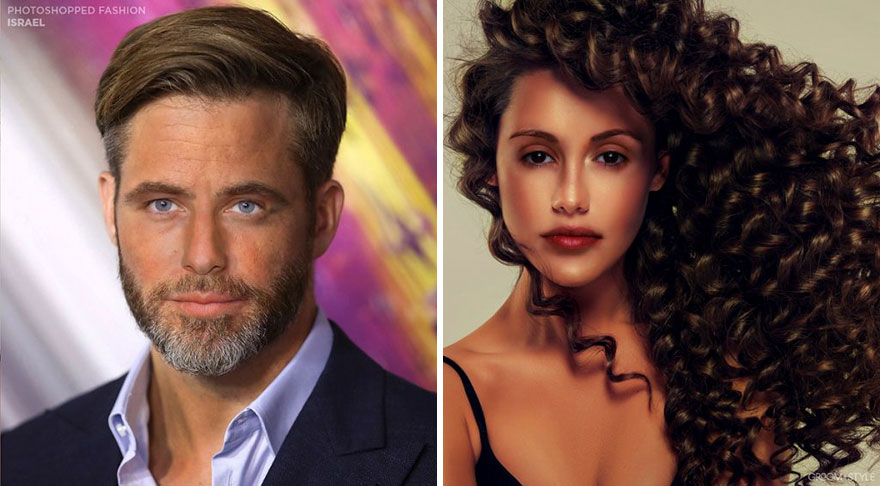 Tanned skin is considered stylish in Israel, and is very popular right now. Our Israeli designer, Rony, suggests that big lips are also thought beautiful – hence the lipstick. Curly hair is both common and aspired to by women in Israel. Men still embrace metrosexuality, and are guided in their choices by celebrity males who exemplify the manly look: lots of hair, carefully managed! 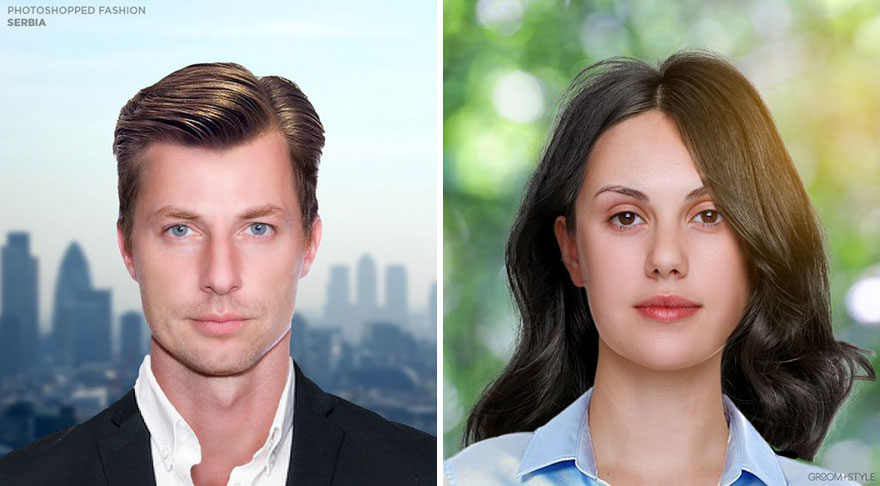 Our Serbian designer, Davorin, used his creative license to give the male model a business style and the female model an outdoors look. Davorin admits that he deliberately made the male model clean-shaven because beards have become too trendy in Serbia! Serbian fashion tends to be daring, and Davorin emphasizes the need for experimentation when developing your personal style. 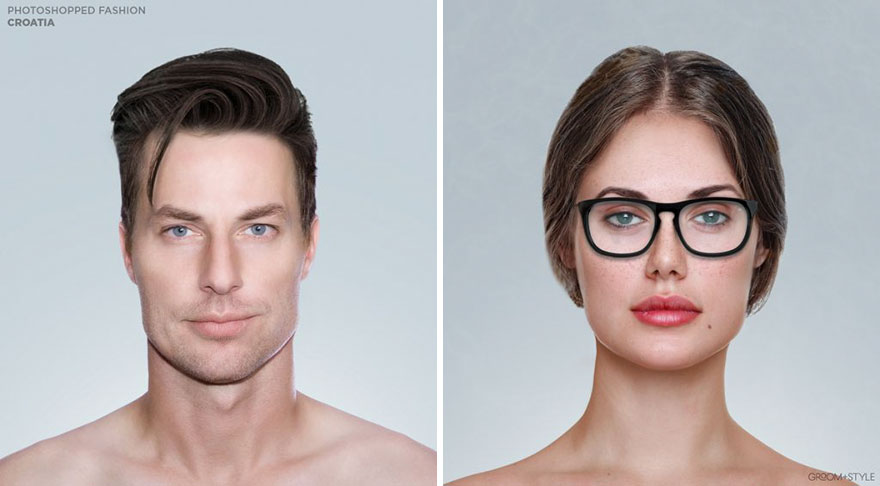 Jakov from Croatia has given his models a timeless, classic look. He added glasses and a bouffant ponytail to the female model to make her look more confident and intelligent. Being just across the Adriatic from Italy, Croatia is not far from the heart of contemporary fashion. While many people play it ‘normcore’ and ‘dress for the weather,’ the country’s fashion leaders are busy mixing up cyberpunk and DIY, neon and vinyl. 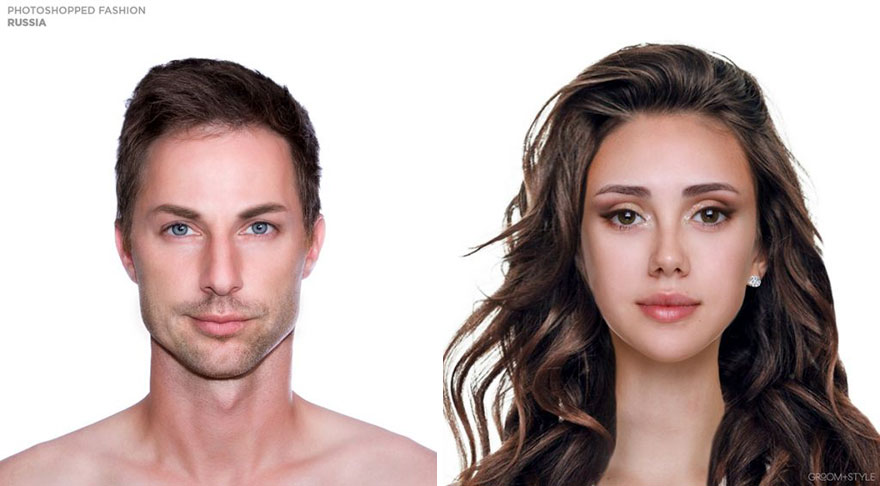 Oxana, our Russian designer, added glitter to our female model’s eyes corners and highlighter across her face for a more moisturized look. She sculpted the eyebrows in a Korean style inspired by Ariana Grande, while the earrings add glamour and draw the beholder’s gaze to the model’s eyes. The male was styled to be a bit of a Russian rogue. His hair and stubble were darkened to make him more handsome in Oxana’s eyes. 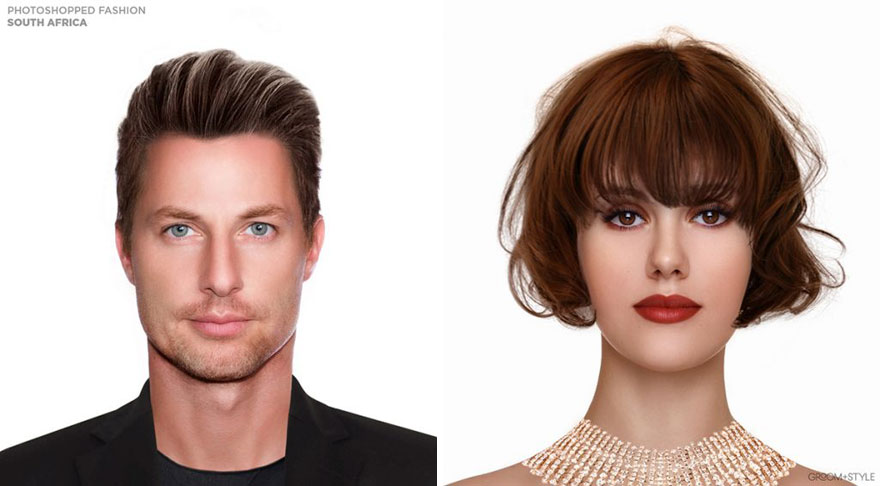 Lucinda from South Africa looked to The Great Gatsby for inspiration to make her models bold and beautiful. The female model’s gold choker necklace is a statement of confidence, while the male is made more mature with a touch of facial hair. The woman’s fringe is very fashionable in South Africa this year, and it complements the model’s bone structure. 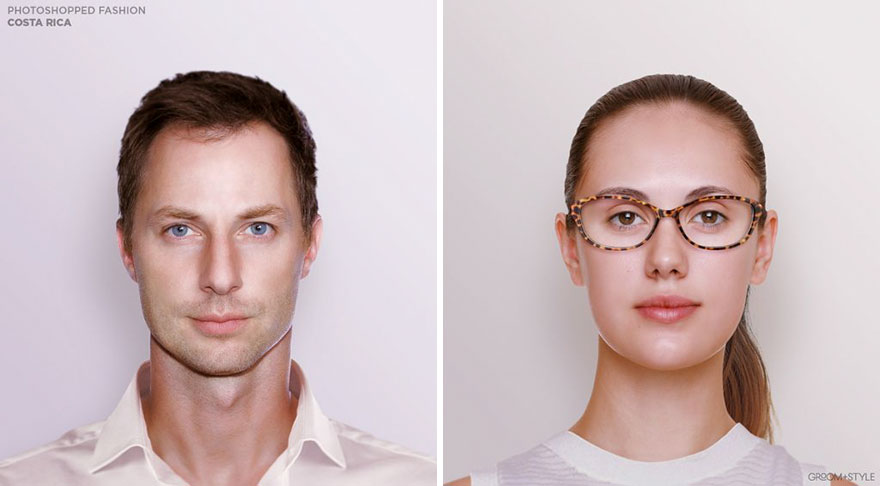 The Costa Rican versions of our models have been minimally enhanced since the designer preferred to bring out their natural beauty. Their clothes and hair are simple so that the beholder is not distracted from their face, and the female model wears glasses to express intelligence. 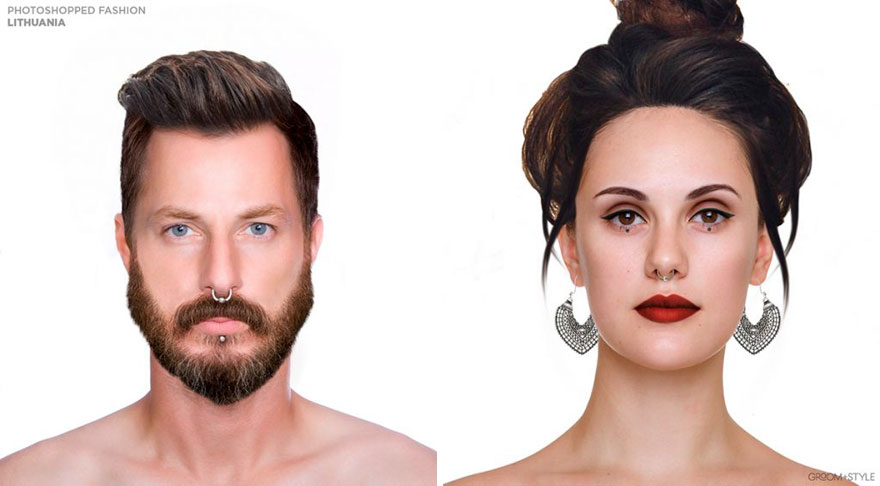 Justina, our Lithuanian designer, has chosen looks that combine traditional, stylish, and trendy elements. In fact, she admits she’s not sure where one ends and another begins! The man sports a hair-do known as The Regulation Cut, a classic military look that has been big on the high street for several years now. The models’ Bohemian and traditional Baltic, Prussian, or pagan touches feel fresh and young despite coming from a long and rich heritage. 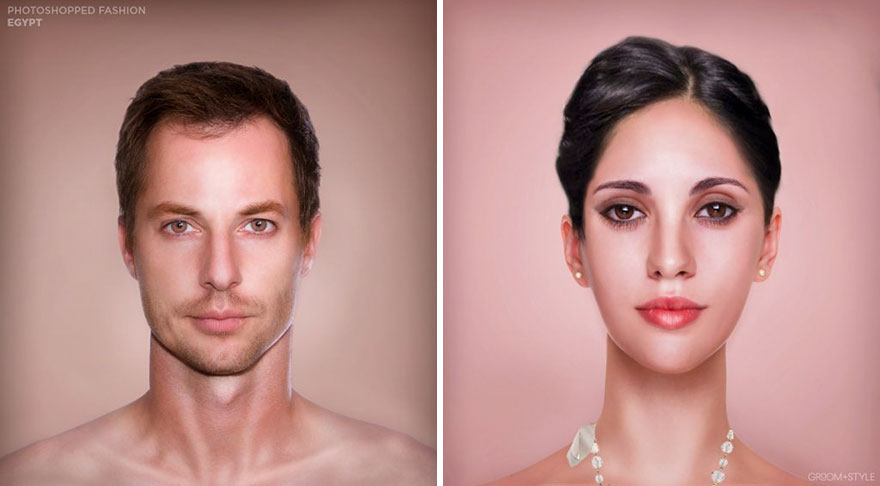 Designer Amal chose a “dreamy, classic” Egyptian style. She opted to avoid accessories and focus on human beauty instead. She added a little facial hair to bring out the handsomeness and structure of the male model’s face. Egyptian style is exciting and modern with fashionistas mix-matching traditional North African dress with thrift shop eclecticism. 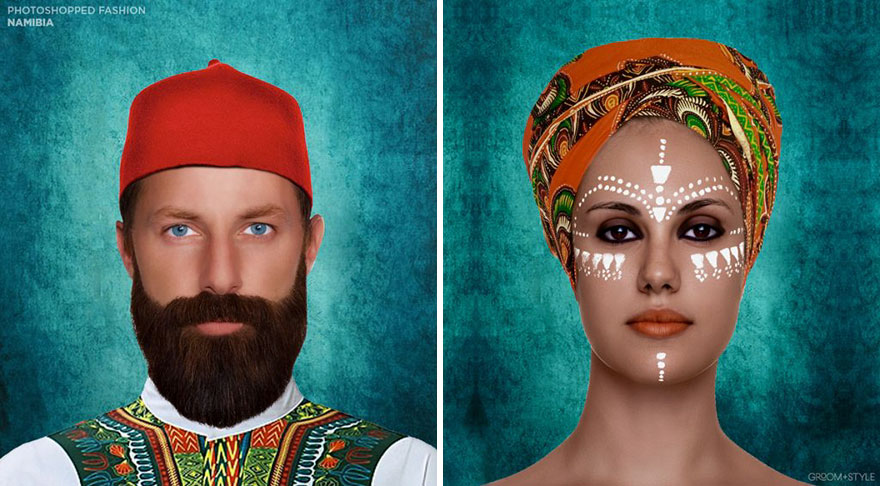 Eric, our Namibian designer, gave the models traditional elements that are trending in Africa right now. The female model has a head wrap and facial painting, and the male wears a dashiki (west African-style tunic) and Yoruba hat. He has a beard, like most African men. Eric reflects that fashion knows no race or color, but that beauty is often defined by the culture in which it flourishes. 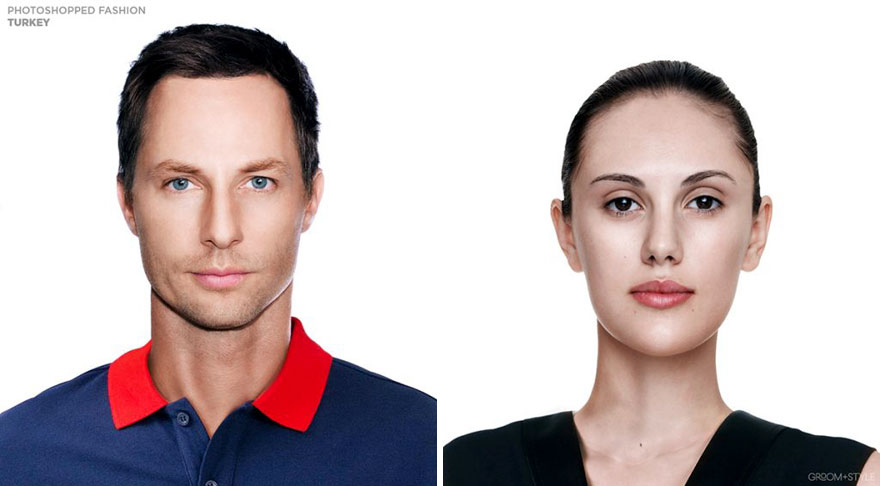 Brands tend to ask our Turkish Photoshop expert, Mehmet, to keep their models looking natural. Style magazine readers sometimes mistrust overly retouched images. He added a slight tan to the man and brought out the fullness of the woman’s lashes. 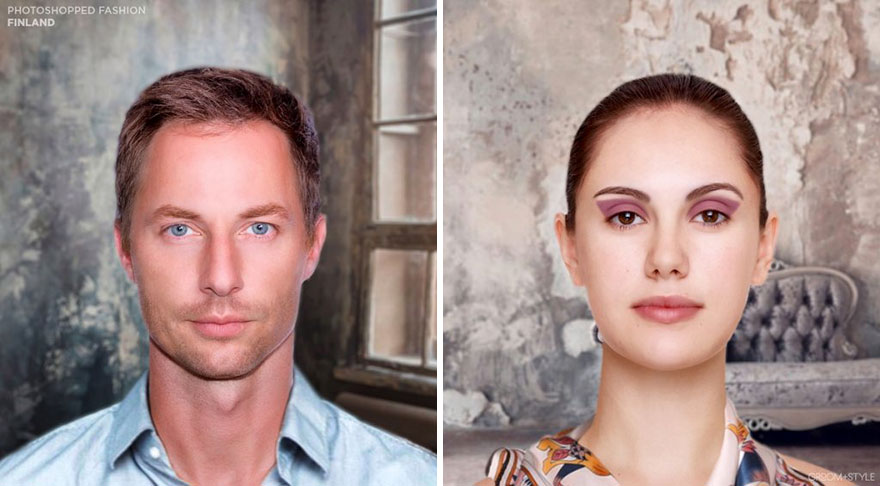 The Finnish interpretation of our models is natural yet classy, confident, and empowered. Our designer kept things simple, opting for a couple of signature flourishes to add flair: the bold, purple eye makeup and trendy scarf of the female model, and a blue shirt and darker hair and stubble to bring out the male model’s natural coloring. 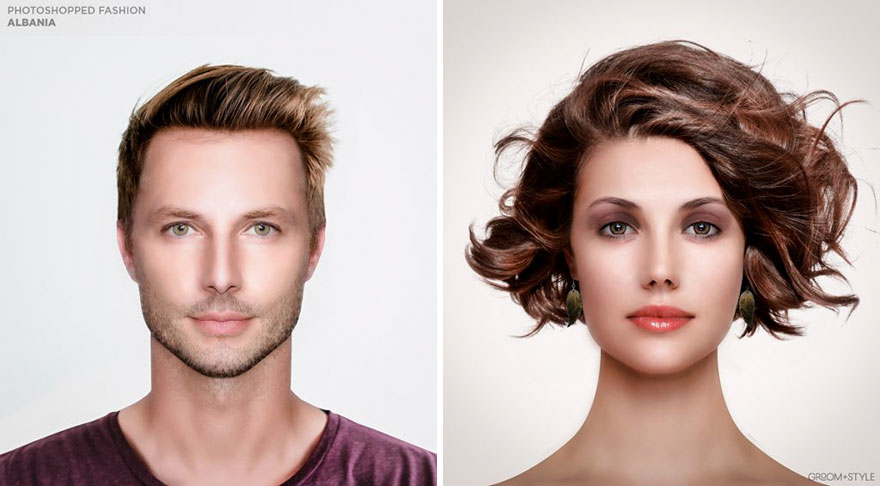 Our Albanian designer, Sokol, was openly influenced by digital fashion magazines. His avatar-style adaptation of our models speaks to the phenomenon of virtual fashion models on the international scene. Will style become more universal when virtual models can beam in from catwalk to catwalk? Sokol chose sweet, glowing colors for his models, and a curly bob for the female model to add volume and definition to her look. 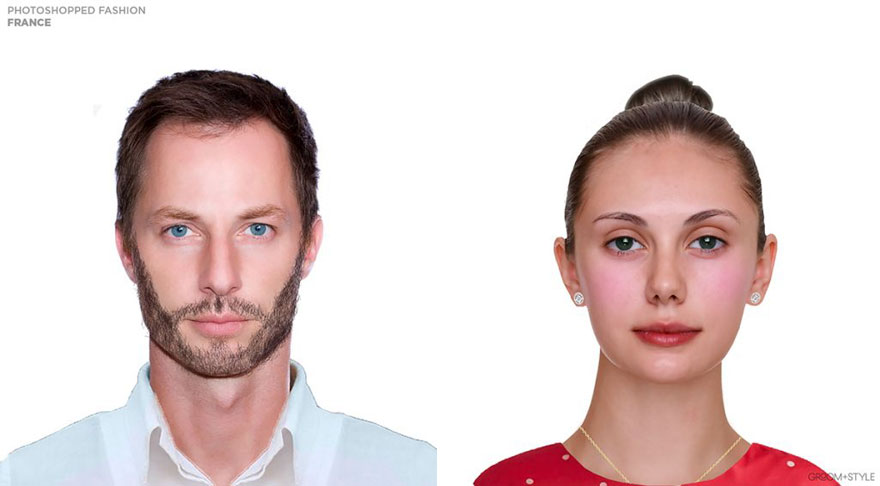 The French look is as much about the practicality of day-to-day life as it is about being the most stylish nation on EarthTM. Our French designer capitalized on this unencumbered everyday look, adding simple modern jewelry and easily maintained hair. Plus, nothing says “man” more bluntly than a beard. 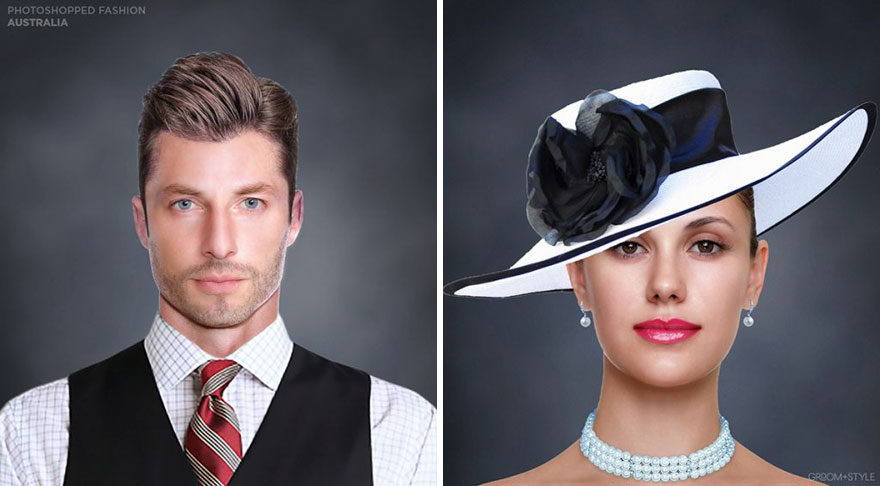 The Australian versions of our portraits were designed for a day at the Australian Melbourne Cup races, a glamorous event that has become synonymous with Australian style and fashion. The male model is no-nonsense and simple but sophisticated. His hairstyle is a familiar sight in urban Australia today, as is his ‘designer stubble.’ The woman’s bun was chosen to allow room for her hat since some people consider hat-wearing to be the main (unofficial) competition at the Melbourne Cup! 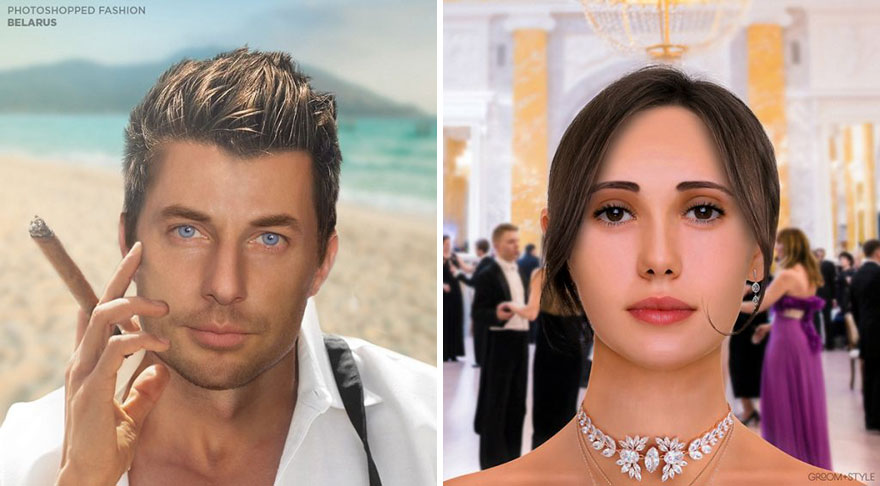 For our Belarusian designer (Ilya), a suntan is an emblem of a busy lifestyle. Both portraits exhibit the wealthy look to which modern Belarusians aspire, according to Ilya. The cigar is a kind of accessory for a successful businessman, while the female model has accessorized with earrings and a necklace for the banquet we see in the background. 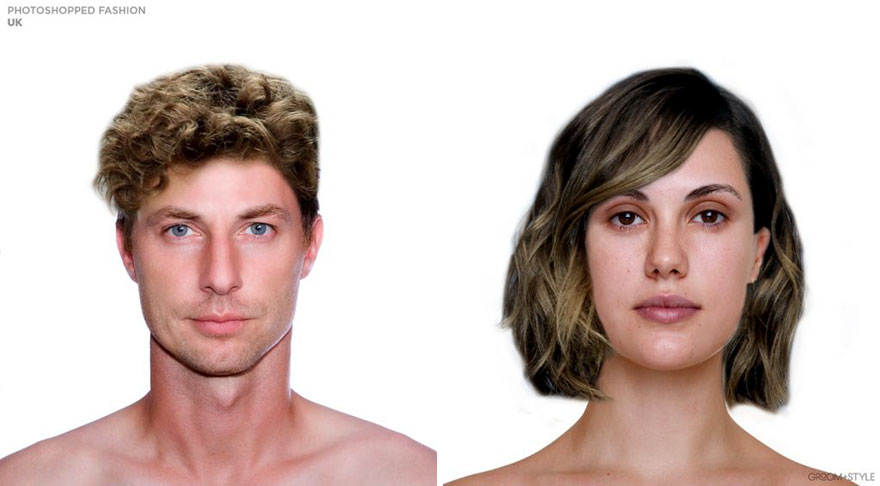 Our UK designer, Clara, concentrated mostly on the models’ hair. She gave the woman a fashionable bob, and added volume to the man’s hair – since she felt it was sorely lacking substance! British celebrities continue to have international influence on style and fashion. Luckily, a cool umbrella goes with everything… 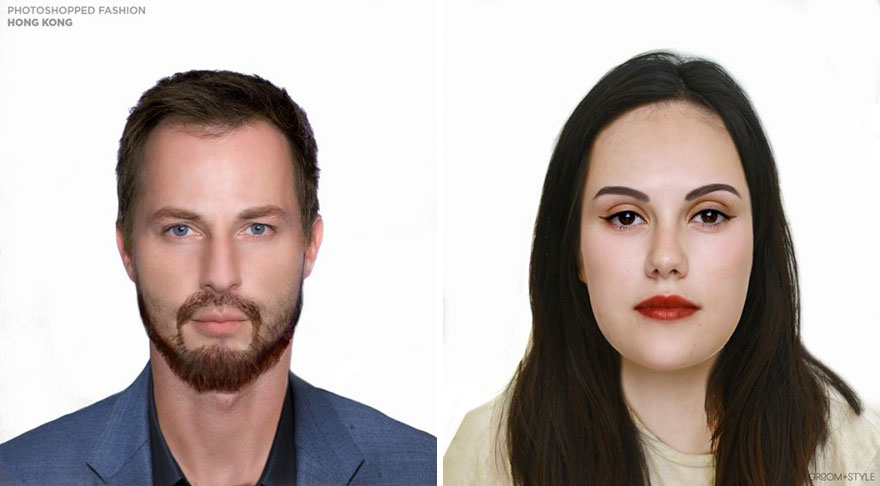 For the male model, our Hong Kong designer chose a suit+tee combo – the unofficial uniform of the city’s central business district. Men in Hong Kong don’t tend to wear accessories apart from a watch. The female model’s hair was styled to match a popular look in the region and is feminine and casual. 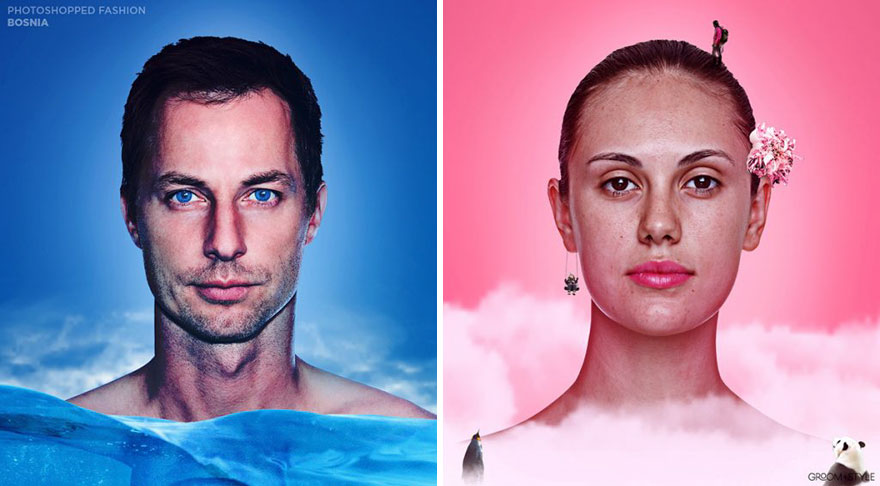 Bosnian designer Ivan considers his style to be “fairy tale sub realism.” He has added details to bring out the inner character of the models, avoided makeup, and exaggerated their skin imperfections to bring out a natural sense of beauty. Recent generations of Bosnians have favored makeup and careful attention to hairstyling, but millennials have reacted against this, preferring the more natural yet sophisticated style that Ivan has conjured. 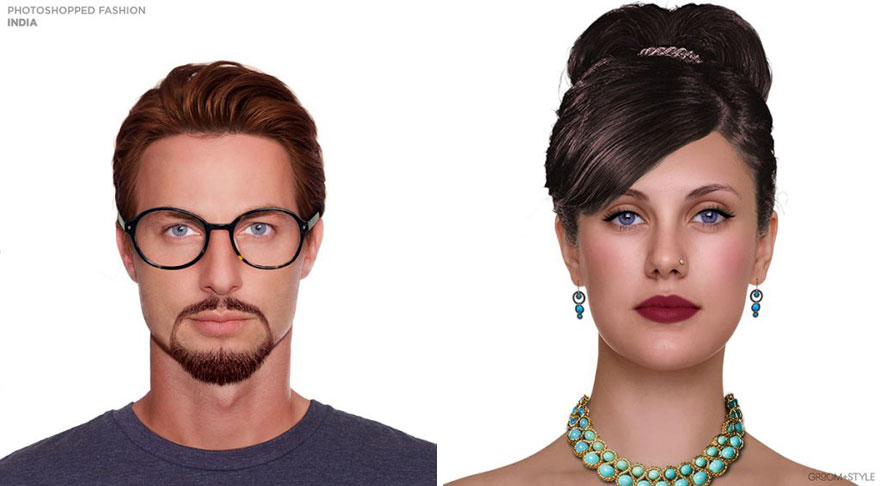 Indian fashion has returned to its roots, as reflected in our designer’s choice of traditional elements. Heritage fabrics, bright colors and Indian craft are big internationally and recognized back home, too. Designer Anurag also points out that vintage allows people to be unique – and that one ‘unseen’ touch he would add is a pocket watch for the gent. 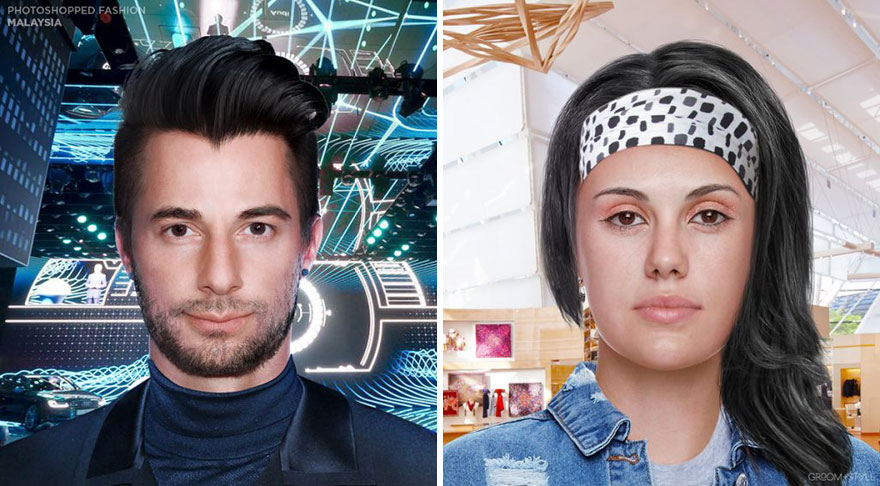 Our Malaysian designer gave the models a stylish, young, modern look. Both models sport black hair with a soft curl for added elegance. The man’s facial hair and woman’s accessories make the models more attractive to the Malaysian eye. Malaysia is a forward-looking, wealthy country, with state-of-the-art architecture and fashion, as reflected in these shots. 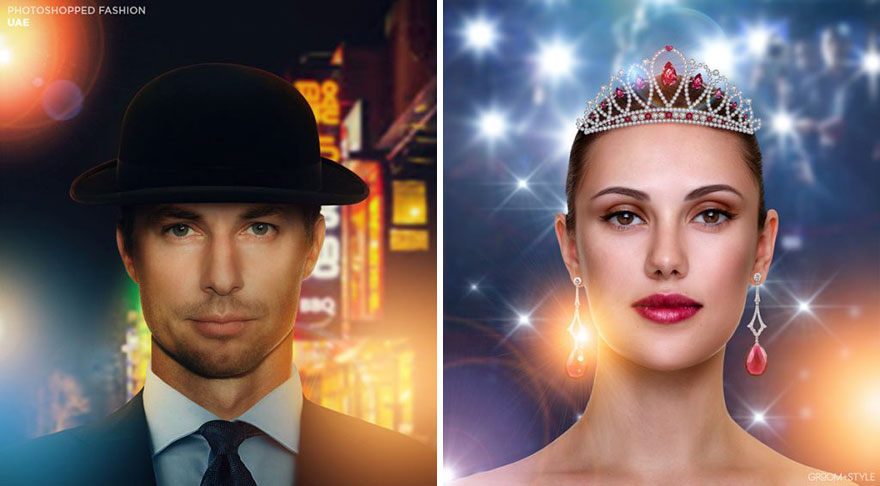 Our UAE designer, Tetiana, chose to imagine our models as celebrities on the cover of a magazine. But she was keen not to lose their natural beauty beneath artifice since the natural look is regaining popularity globally. Tetiana added detective movie-style accessories for the man, and a diadem crown and earrings for the woman – reflecting how Hollywood ideals reach distant shores. 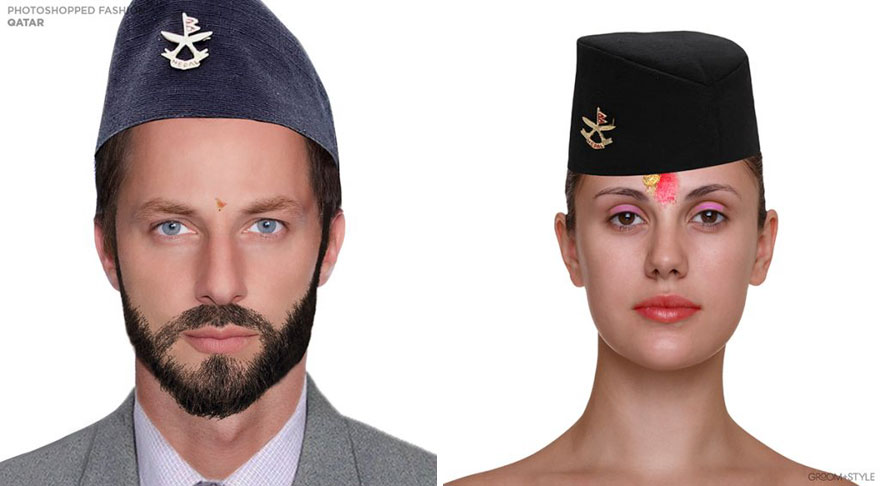 Nepalese people account for the second-largest expatriate population in Qatar, and their influence is felt in the country’s evolving culture. Our designer is a Nepali man living in Qatar, and he has included Nepali hats and Tika (Hindi forehead markings) for his models. 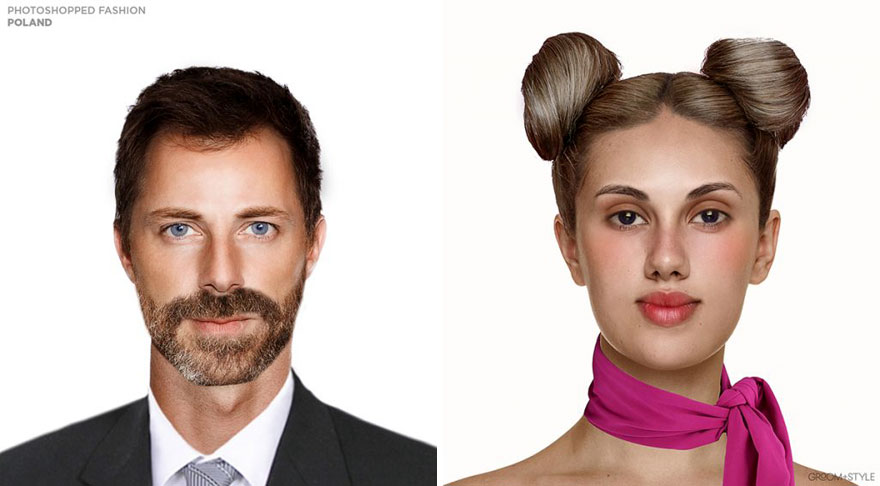 Natural and youthful makeup is very fashionable in Poland right now, so our Polish designer (Sarah) has added blush to the female model’s cheeks and nose. The bowed scarf has also been big with women and girls in Poland. The male model’s beard reflects facial hair trends of recent years, while his classy and mature look conforms to Sarah’s personal preferences. Sarah says she would not have edited the photos the same way five years ago – fashion and style move pretty quickly. 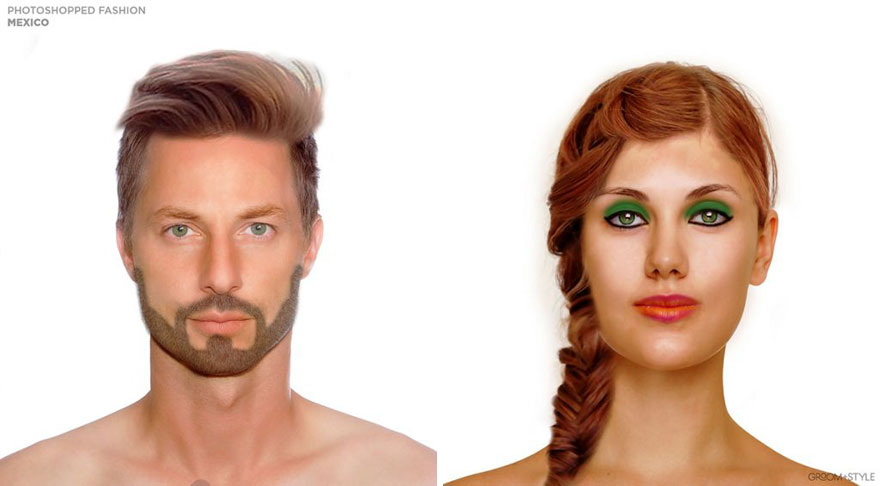 In Mexico, the summer hipster look reigns. Our designer added casual, over-the-shoulder braids for her, and an attractive clean-cut beard and blow-dried comb-over for him. Mexican fashion is currently all about bright patterns, heritage motifs, frilly dresses, and traditional craft. But a crop of exciting young designers is busy working on diverse ideas. From clean lines to dramatic flourishes, you can never second-guess Mexican style. 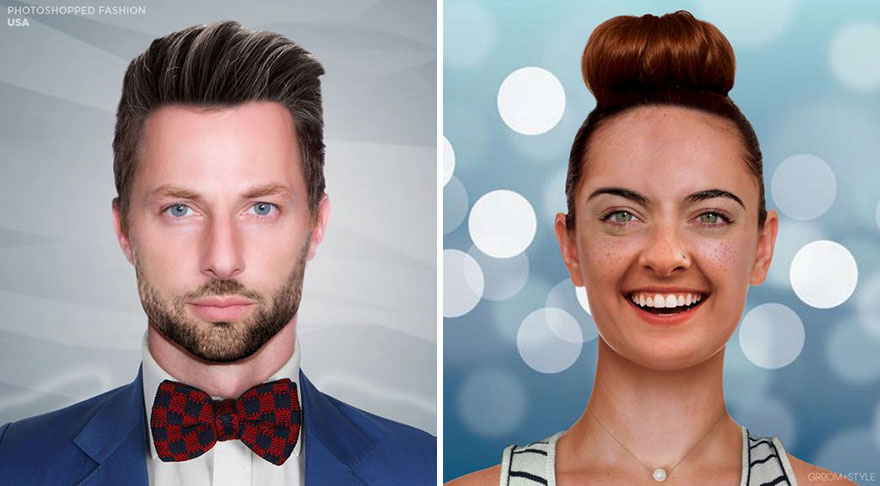 Our American designer took things to the street, giving the female model an urban, playful look with the wholesome smile and freckles of a grown-up Mickey Mouse Club icon (think Britney and Justin). The male model is given the British dandy look favored by Andre 3000 and Brad Goreski. You can bet there’s an umbrella just out of shot.