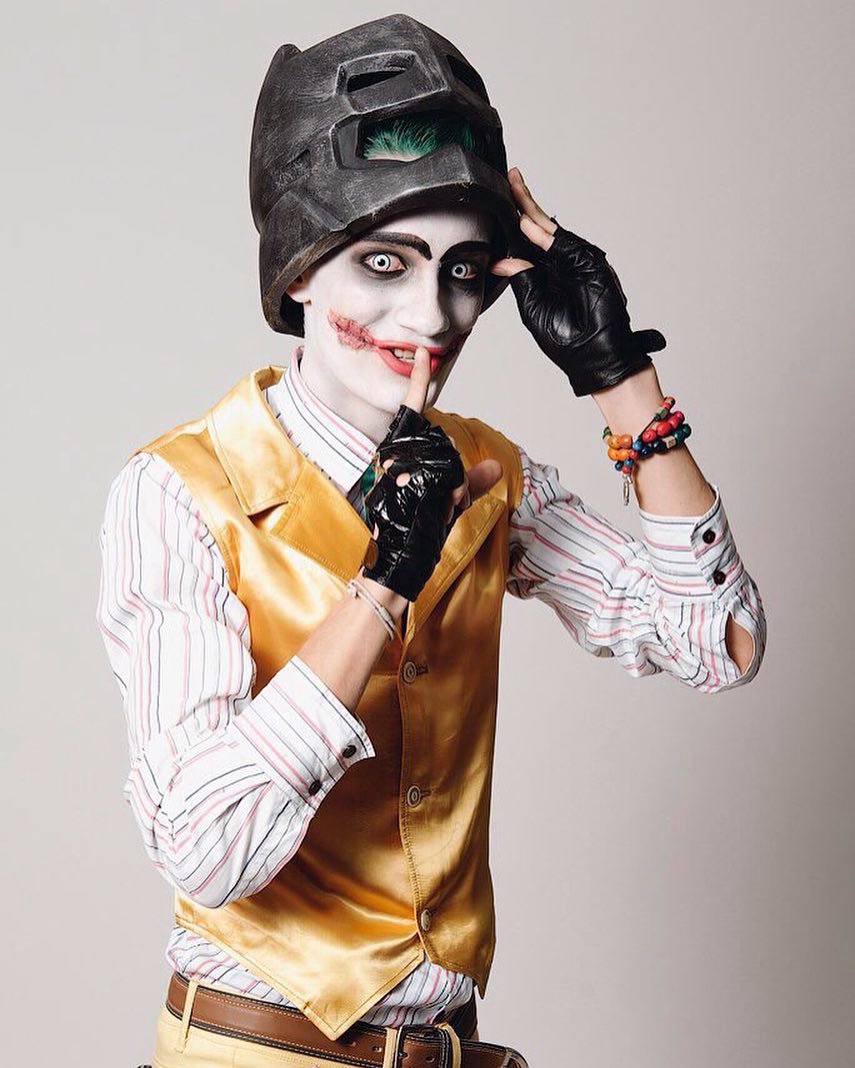 More like works of art than ordinary props, 24-year-old designer Aydar Migranov’s masks have already been used by Jason Momoa, Tom Holland, and other actors.

Jason Momoa might not have looked so pleased in this photo had he not been holding an Aquaman mask — a gift from Aydar Migranov from the small Russian town of Beloretsk (1,600 km from Moscow). Aidar fell in love with comics in childhood, and Aquaman was always one of his favorite characters.

That's Jason Momoa with our helmet! To your knowledge, he is more than a great actor, well-known from "Aquaman" and "Game of Thrones", he is just a good guy, who is eager for justice. A true superhero both on screen and in real life! Right now USA wants to build an Observatory on Hawaiian's shrine, and Jason stood along with his people to prevent this from happening. @prideofgypsies #wearemaunakea

“Comic book heroes meant a lot to me when I was a kid. They are not perfect and have a lot of flaws, but the goal of the superhero is not perfection, but to strive for it,” says Aydar.

So, to keep doing something you might like, I am thinking about making a new version of a Venom mask. Have any of you got ideas or requests? This mask is available for purchase in our store, link in the bio! Our dm is open too to answer all of your questions.

Following his parents’ wishes, he entered the Faculty of Economics at Bashkir State University, but dropped out in his second year. In 2015 the movie Ant-Man was released, which inspired him to create his first mask.

Want make video review,what do you think about it? This Daredevil cowl s available for purchase at our store. Thank you @abstractharmony for photo.

“Paul Rudd’s acting and comic character inspired me to get some movie paraphernalia. I decided to go for an Ant-Man helmet, but it cost 28,000 rubles (about $440). I didn’t have that kind of money, so I made my own out of improvised materials,” Migranov recalls.

I have finally finished my own design of DD, which I had been working on for almost half of year. First trailer of the 3rd season made me think about a different look of the character. Something more of a military and tactical style, something that would fit in our modern world. And something more pure evil ! I've got the image popping in my head right away and I'd started creating my design. As you can see, the horns look more sinister, and the design itself is more edgy: it still has that Netflix version look but also has more classis comic book elements, and Daredevil 2099 also. I tried to draw a grid near the ears and temples, which would increase the sound vibration coming into the head of Daredevil so you can hear better. Of course, I wasn't the one to actually create this, so don't expect it to work in this helmet. It is simply showing what Daredevil would use if he was in our – or future – time. We’ve paid careful attention to design of these helmets to make sure we got every detail as perfect as possible. This will be a great addition to your cosplay or even just to display it on your shelf. Everyone will want to know where you got it, we made sure of that.

Although the first mask remained unfinished due to lack of knowhow, he got interested in the craft and went on to make a Batman mask, which he tried to sell on Ebay. Two weeks later it was bought by a guy in France for $155.

Together with his brother Fidail Nugamanov, Aydar spent the whole of 2016 trying to sell masks in Russia. However, demand was low, and for six months the guys sold masks at no profit so as to build up a portfolio.

Later, Aydar’s parents and relatives helped out financially. He used the cash to buy a 3D printer and more expensive materials to create a Daredevil mask.

“It was noticed by actor Charlie Cox, who played this superhero. Through friends in the U.S., we sent him two copies — one for him personally, and the other to get his autograph. He happily agreed,” says Aydar.

I am the immortal Iron Fist, protector of Kun Lun, sworn enemy of the hand… And owner of the Daredevil helmet from now on. Unfortunately we didn't manage to finish Iron Fist mask of our own design in time, but we got him a Daredevil helmet for his nephew (who was eager to recieve it!) and we got some autographes for ourselves! I hope @finnjones you liked it. By the way, I am sure I am not the only one to wish for more adventures of this character in the future. Who's with me?

After that, business perked up. Aydar set up his own online store and through friends began sending masks to other Hollywood actors.

We always do our best to answer all of your questions, and here's one we get quite often: where do we get our faceshells? Well, actually, we produce them ourselves. We use different changeable lenses, forms, paintings and some really strong magnets. Of course, both faceshells and our masks are available for purchase at our store. We hope that satisfies your curiosity ;)

Big day is coming tomorrow! ;) Let's stop right here and keep you guys a bit intrigued. And right now I just want to express my support and admiration for Tom Holland as a Spider-Man. No matter whether he is in Sony or Marvel, all of his true fans, including me, will always be by his side. Mask on the photo is available for purchase at our store! Link in bio!

As you know, we have some alternative paintings, and that's one of them. Which one do you like the most, black one or white one? Maybe there are some other colour variations you would like to see? Don't forget to order now, so you can get your mask just in time for Halloween 🎃 Link to our store is in the bio!

We often hear the same question from you again and again: "Why are you ignoring Star Wars? You aren't fans of it, are you?" Personally I loved old Star Wars since I was a child, so this felt personal and I didn't have enough experience. I also haven't watched the new ones. Do you think I should? Anyway, Star Wars TV show is coming very soon, and I thought it's just about time to finally START OUR STAR WARS PROPS RELEASE! The first mask shall be Mandalorian's one, but await for a much-much more in a near future. We are ready to hear out your suggestions and take orders! 🎉

You guys should really try hard to imagine what I feel now as a true fan of the Moon Knight. I and my friend @johncliffalvarez even made a fan poster! What are your thoughts about it? We literally can't wait for an announcement of his actor, to see his full look and every other detail possible! Does everyone feel the same or is it just me?

Anyone out here attentive enough to see some new little changes on our Moon Knight mask? Pay attention to a colour palette. Now it's whiter, lighter, and other -er! Also, await for a little surprise connected with it quite soon ;) This mask is actually a gift for our new famous friend; I believe you know who he is! So try and guess. To see it more detailed and so-called "in action" we will provide you with a clip with this mask, so stay tuned! Of course, it is available for purchase at our store now.

To keep our hands busy and our customers interested, we created something new: come and meet another version of the Orm helmet. Now it has removable faceplates (thanks to magic of the magnets). What do you think? @creepypuppet

So I've got another helmet of my own design! First Shazam! I always was a dreamer type, especially when I was child. One of my favourite things to think about was Ancient Greece and mythology, Middle Age, the knights and the warriors. I dreamt about being like them. Their equipment such as swords, armor, helmets are just amazing. I actually wanted to become a smith to create something like this. And, obviously, I loved comics and their cartoons. Superman was one of my favs! It would be awesome to be able to turn into superhero at least for some time. Now I got another hero as my favourite – Shazam! After watching this movie I came up with idea how Shazam would look in ancient times. The helmet that you see right now is of Greece style, yet saving original colours of Shazam. You can see some magic runes, canon shape, all of which represent earlier times. Just say the word, and feel the power flow through you ⚡ @ponysmaster @jovanarmandofficial @jackdgrazer @smoregrace @asherangel @zacharylevi @theianchen @faitheherman

So the whole world is freaking out while waiting for an upcoming Avengers: The Endgame film. Do you remember their badass new costumes for quantum realm? They did draw a lot of attention. So I've seen an art inspired by @rahalarts if Daredevil would have recieved a similiar suit. That pushed me to making this concept come to life with a new customized painting! Of course, it will be available for purchasing – but be sure to grab it quick, because this version is LIMITED. #savedaredevil #Daredevil #netflix #mattmurdock #manwithoutfear #daredevilcosplay #charliecox #elektra #bullseye #Dccomics #Marvel #jonnybernthal #benbarnes #BillyRusso #thedefenders #jessicajones #ironfist #JusticeLeague #Comics #punisher #avengers #Marvelcosplay #Thanos #avengersendgame #MarvelComics #InfinityWar #DCEU #MCU #spiderman #avenger

How many of you have watched the “Justice League :Flashpoint” raise your hands! 🖐 Did you like it or nah? So here is my golden/black repainting of Ocean Master’s helmet from the cartoons. What do you think? @creepypuppet @aquamanmovie #oceanmaster #patrickwilson #jameswan #Orm #aquaman #Dccomics #Marvel #Superman #Spiderman #JusticeLeague #Comics #Batman #Avengers #aquamanmovie #jasonmomoa #Marvelcosplay #Thanos #SuperHeroes #MarvelComics #villain #InfinityWar @wbtourhollywood #Spider #DCEU #MCU #captainmarvel #Venom #Avengersendgame #mera