1970 Lancia Stratos Zero: A Crazy Concept from The Wedge Era 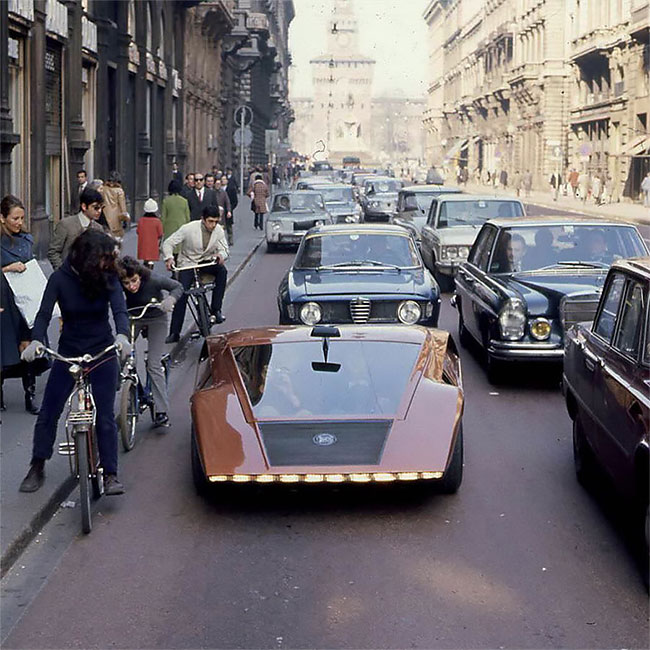 Pininfarina and Bertone were two of Italy’s best recognized and most successful postwar coachbuilders. Both Milanese carrozzerie competed for commissions and they debuted outrageous concept cars to impress the public and to entice automakers into choosing one of them over the other. In 1970, at the Turin Auto Show, Bertone unveiled the Lancia Stratos HF, which soon became popularly known by its internal nickname: Zero.

To challenge Pininfarina, whose designs tended to be alluringly curvaceous, Bertone produced a very low, sharply chiseled coupe that appeared to have been carved out of a solid block of bronze. At only 33 inches high, it was arguably low enough to be driven right under a semitrailer. Design experts have commented that the Stratos HF Zero was a significant step between the 1968 Alfa Romeo Carabo and the production Lamborghini Countach. 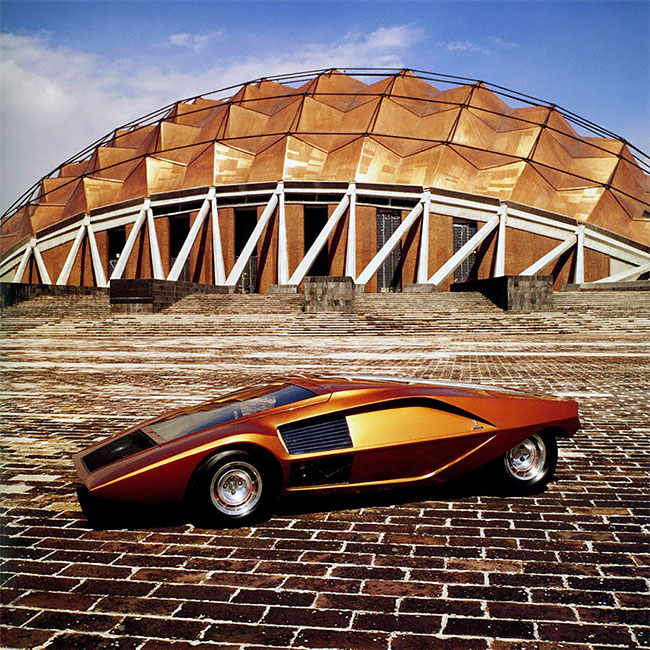 Even after more than thirty years, the Stratos remains extremely futuristic looking. Nothing about it was conventional, save for the wheels in all four corners. The steering column could be moved forward to allow more room to enter the vehicle. Simultaneously, a hydraulic mechanism opened the wide Perspex windscreen, which served as the car’s single door. Occupants could see directly ahead and above—and little else. 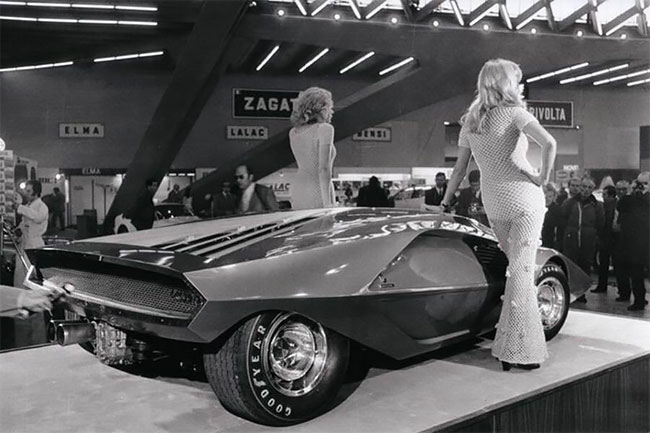 The cost of building the Zero was reportedly forty million lire (about $450,000 in 1970). Nuccio Bertone drove the Stratos on public roads to Lancia’s offices, dazzling all who saw the impossibly low coupe, and marveling at it himself when he drove it under the closed entrance barriers at Lancia’s racing department. 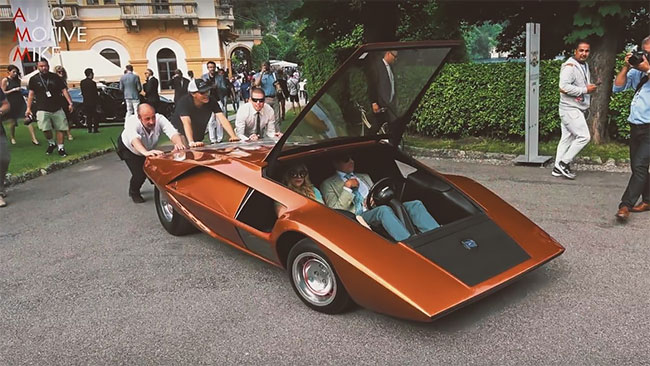 The result of that meeting was the radical Lancia Stratos rally car. Although the production Lancia Stratos, with its midmounted Fiat/Ferrari V-6 engine, did not closely resemble the Zero, the edgy, all-wheel-drive race car would probably not have been built had it not been for the influence of the inimitable Zero. 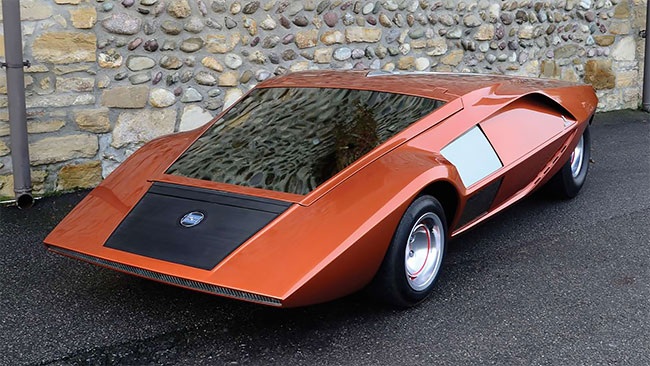 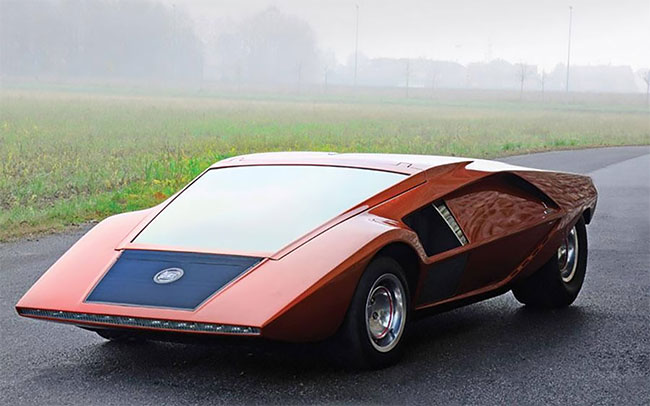 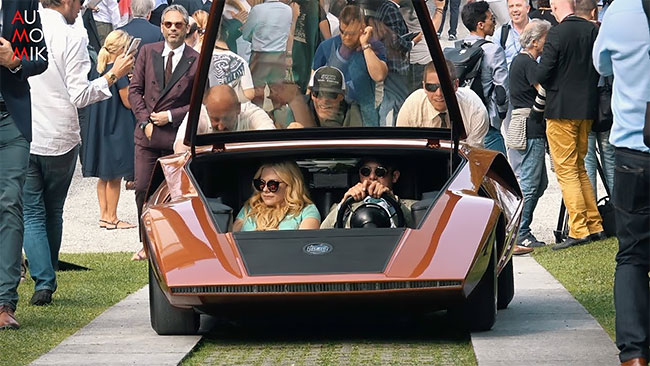 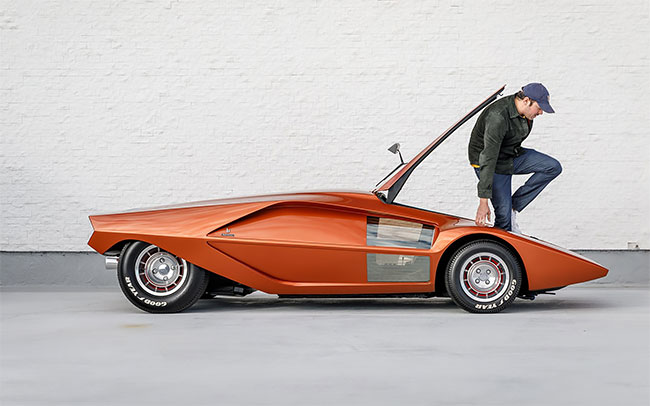 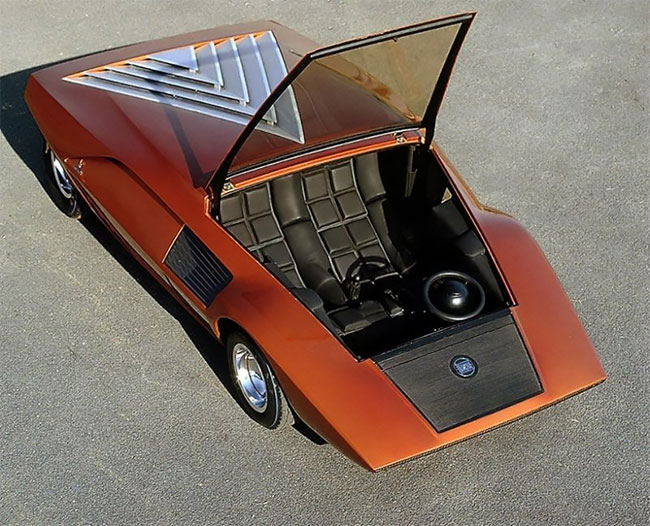 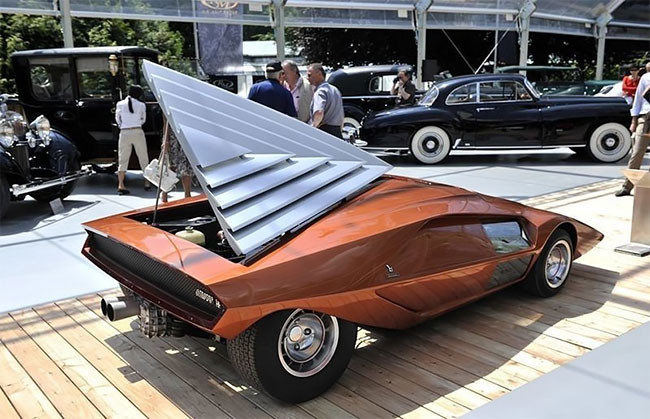 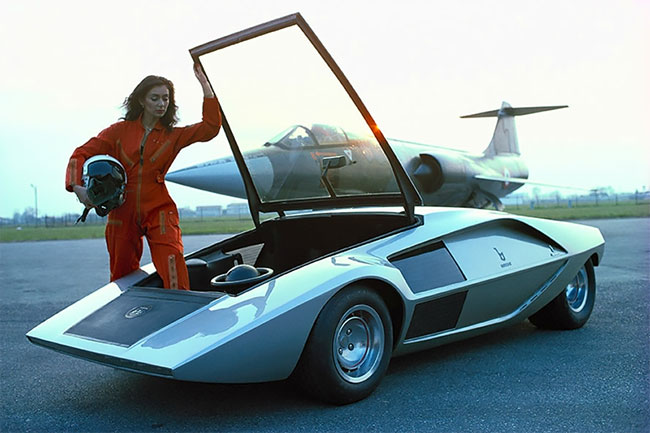 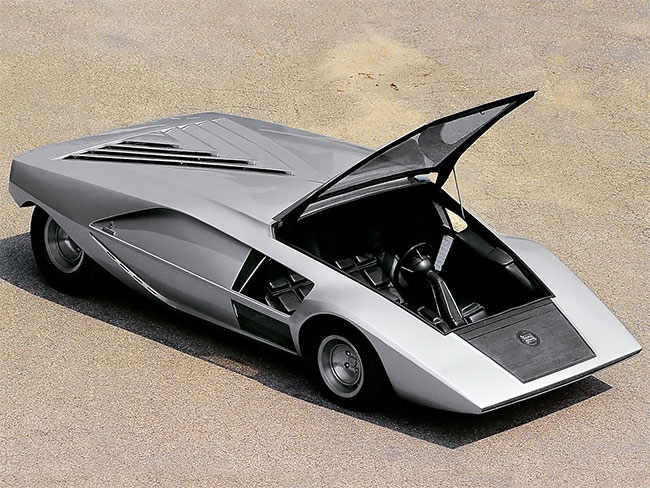 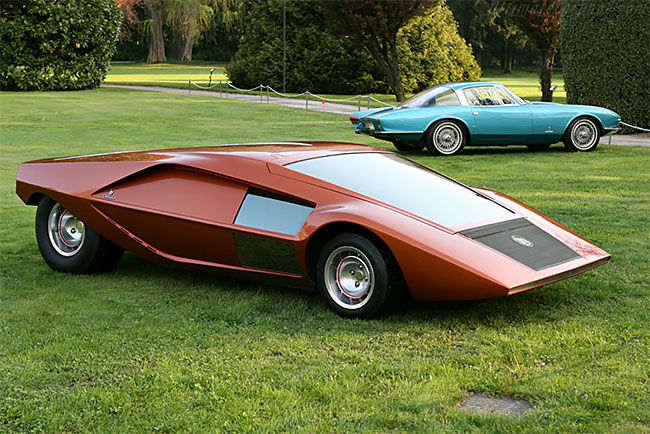 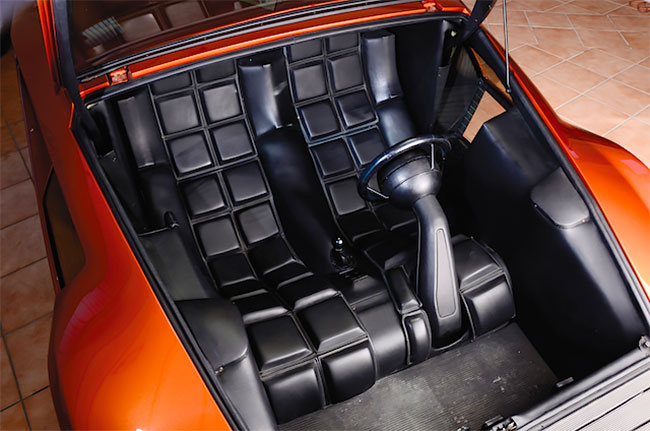 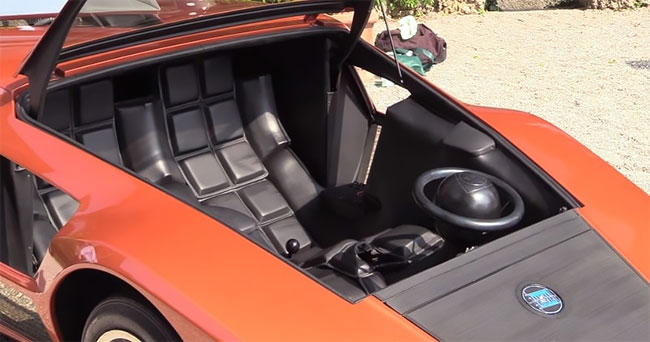 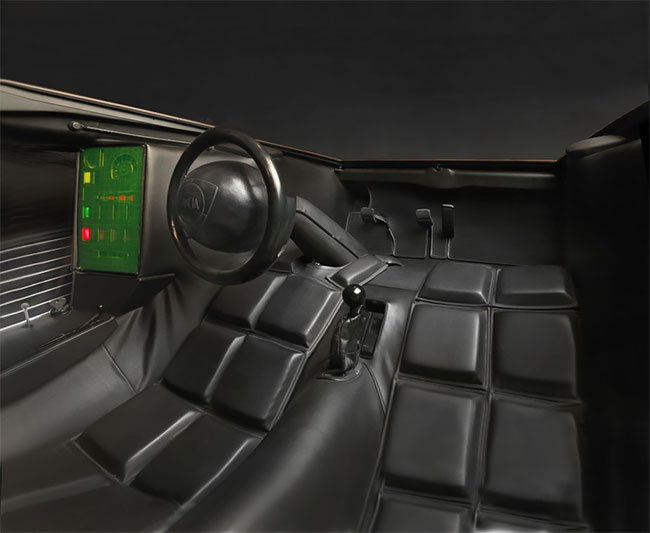 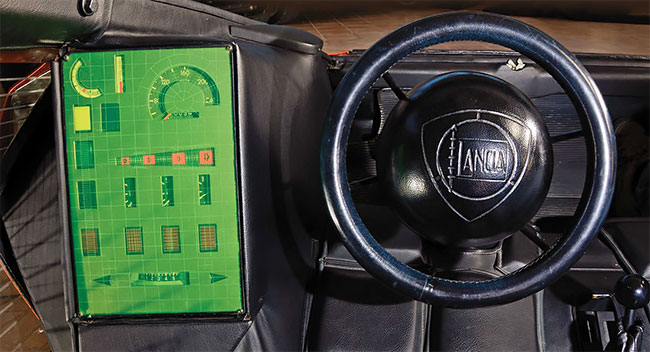 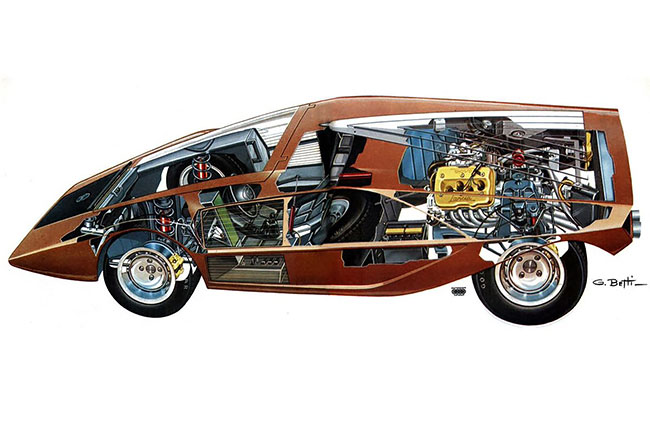 Innovative Virtual Shop
FRUITZ Watches
Elegant Photos That Defined Edwardian Fashion Styles Of Young Women
Californian Inventor Spends Millions Creating One-Off Camper Van To Take His 4YO Daughter Around The World
Dutch Impressionist Painter George Hendrik Breitner Took His Camera Onto The Streets Of Amsterdam In The 1890s
Face Depixelizer Neural Network "Brings Back The Sharpness" Of Photos In Low Resolution, And The Results Are Very Unexpected
John Edlund and His Life-Preserving Valise, 1915
Hong Kong’s 70s and 80s Nostalgic in Keith Macgregor's Photographs
MS Hamen: Haunting Ghost Ship Of The Norwegian Fjords
Weird Kafka-Style Anatomies, Fantastic Creatures And Fancies Chart By Camille Renversades
Behind the Scenes Photographs From a 1950s Casting Call for a Long-Haired Model
Man Puts V8 Lexus Engine And Automatic Transmission On A Bike
Marketing Strategies of the 1960s-1980s: Women in Miniskirts Promote Computer Systems
"The Last Of Us" Concept Art By John Sweeney
Beautiful Colorized Photos of Helsinki, Finland in the 1930s
Arnold Genthe’s Cats : Women Posing With ‘Buzzer’ From A Century Ago
Frederic Edwin Church’s Beautiful Pantings of Icebergs Between Labrador and Greenland, 1859 – 1861
Wonderful Sunny Pics Document A Spring Break In United States In The 1980s
Beautiful Photos of Debbie Harry in Blue Dress, 1979
An Environmental Island Floating on the Equatorial Pacific
Dolphin Shorts: One of Popular Fashion Styles in the 1980s
This Is What Iranian Women Looked Like In The 1970s
Space Colony Art from the 1970s
Air Clicker
1970s, bertone, concept, lancia, Pininfarina, retro, stratos, supercar, zero

Programmer Recreates Classic Artwork With Thread And A Mathematic Algorithm
Stunning Concept Art From The Video Game The Witcher 3 By CD Projekt Red
20 Strange & Unusual Pics From The Early 20th Century That You May No Longer See Today
Cock And Balls: A Photo Study Of Rock Gods’ Packages In Very Tight Trousers
New Jeep Concepts
Amazing Photographs Documented Victorian Houses Moving In San Francisco In The 1970s
Exploring the World of Pop Culture through the Eye of Victor Garcia
Evolution of The Planet of the Apes
HEXO+: A Flying Camera that Follows and Films You Autonomously
Inside Opower's Arlington Office: A robot, a Scooter and Many, Many Couches
2007 ‒ 2023 by Design You Trust. Proudly hosted by WebHostingBuzz.
Privacy Policy · Terms of Service · Content Removal Policy ❤️ 🇺🇦