Inside the Bradbury Building, the Oldest Commercial Building in Downtown Los Angeles 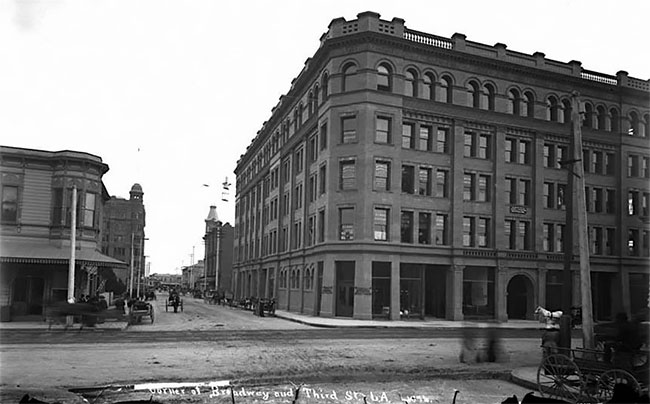 The Bradbury Building is an architectural landmark in downtown Los Angeles, California. Built in 1893, the five-story office building is best known for its extraordinary skylit atrium of access walkways, stairs and elevators, and their ornate ironwork. 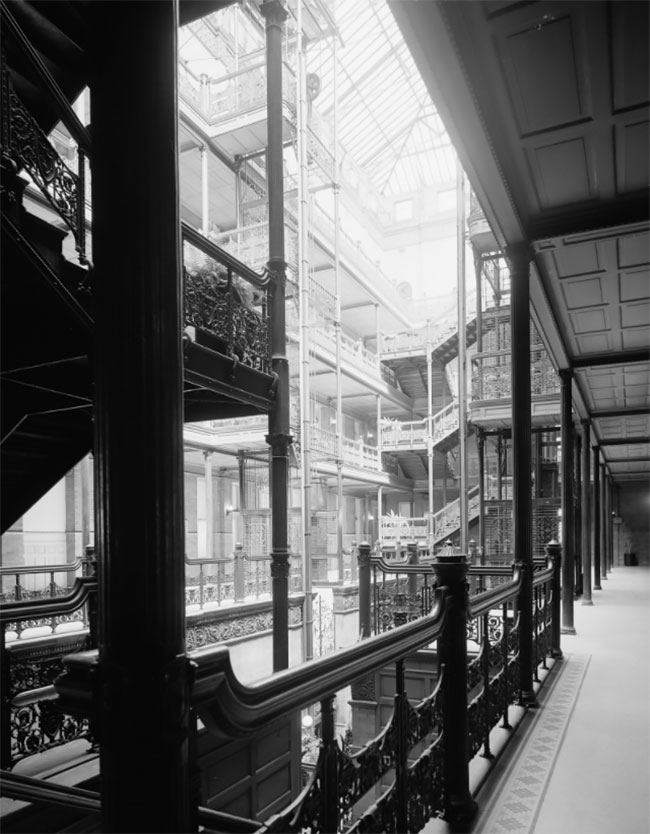 The building was commissioned by Los Angeles gold-mining millionaire Lewis L. Bradbury (1823 – 1892) and constructed by draftsman George Wyman from the original design by Sumner Hunt. It is a fine example of a multi-story structure designed around an inner skylit court. Splendid art nouveau iron work build up the open stairways, open elevator cages and balcony rails. The building is a remnant of the Cast Iron Age, which began with the iron bridges in the early half of the 19th century and ended in the last decade of the century when steel framing took over. 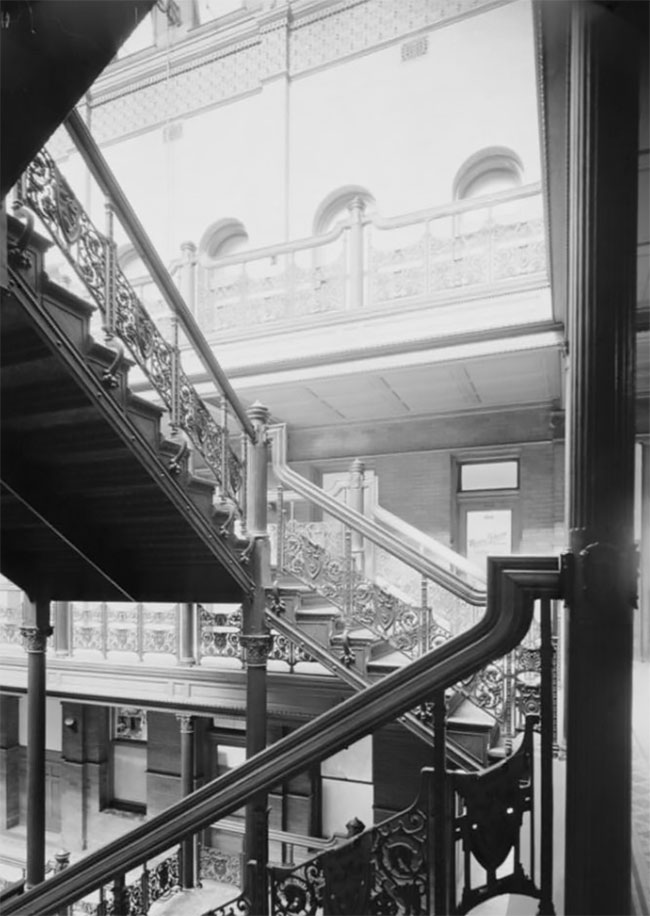 The aesthetic quality of the Bradbury Building is largely derived from the superb environment of an inner court flooded with light. It is an early and excellent example of a break with facade architecture and the acknowledgment of the unpleasantness of a busy city street. By treating the inner court as facades, the architect has supplied an off-street leisurely and enriched space which denies the bustle of Broadway and Third Street. 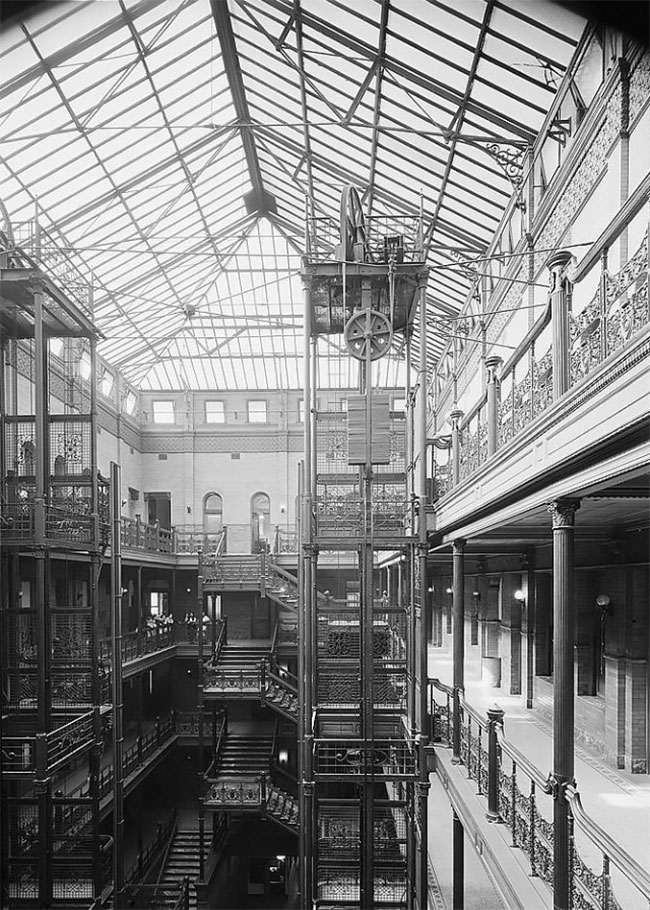 Lewis Bradbury was a gold-mining millionaire – he owned the Tajo mine in Sinaloa, Mexico – who became a real estate developer in the later part of his life. In 1892 he began planning to construct a five-story building at Broadway and Third Street in Los Angeles, close to the Bunker Hill neighborhood. A local architect, Sumner Hunt, was hired to design the building, and turned in a completed design, but Bradbury dismissed Hunt’s plans as inadequate to the grand building he wanted. 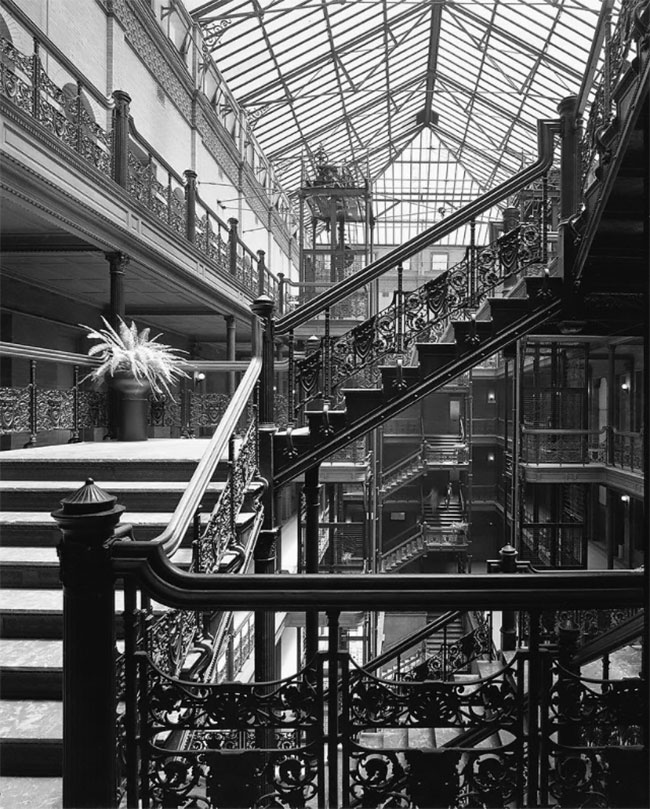 He then hired George Wyman, one of Hunt’s draftsmen, to do the design. Bradbury supposedly felt that Wyman understood his own vision of the building better than Hunt did, but there is no concrete evidence that Wyman changed Hunt’s design, which has raised some controversy about who should be considered to be the architect of the building. Wyman had no formal education as an architect, and was working for Hunt for $5 a week at the time. 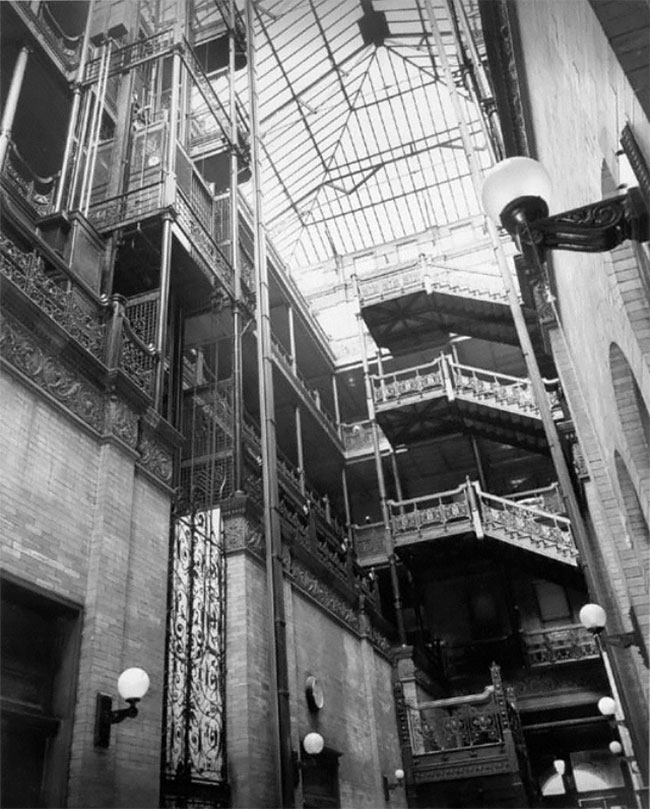 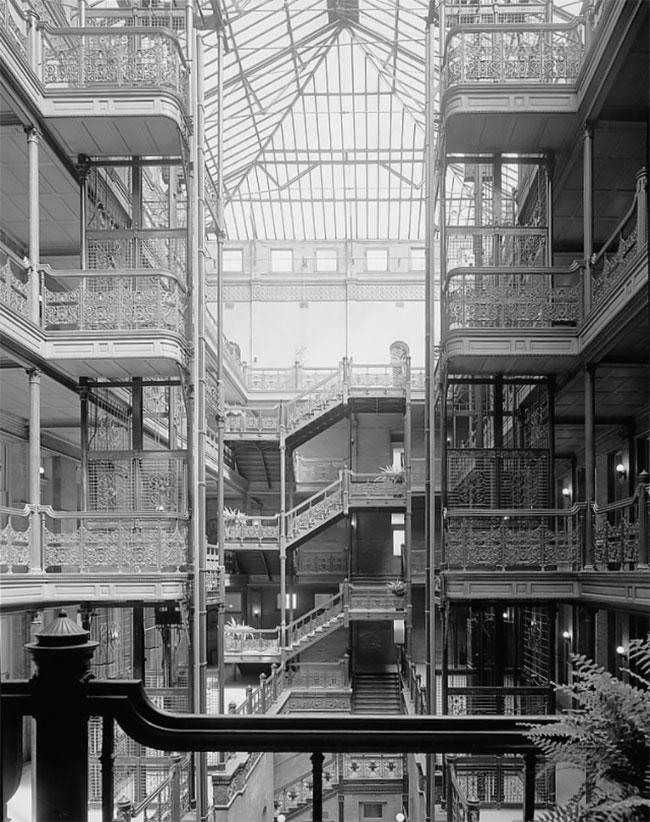 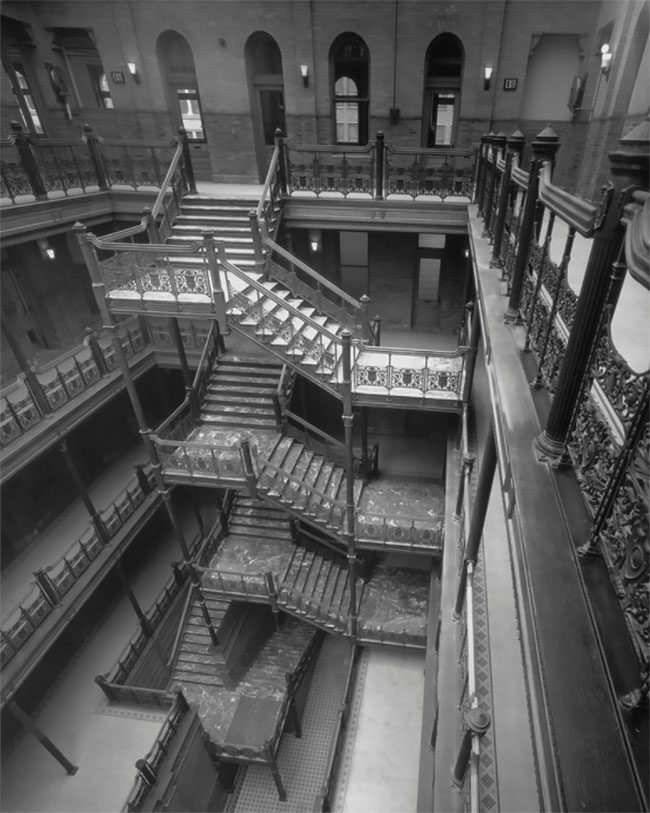 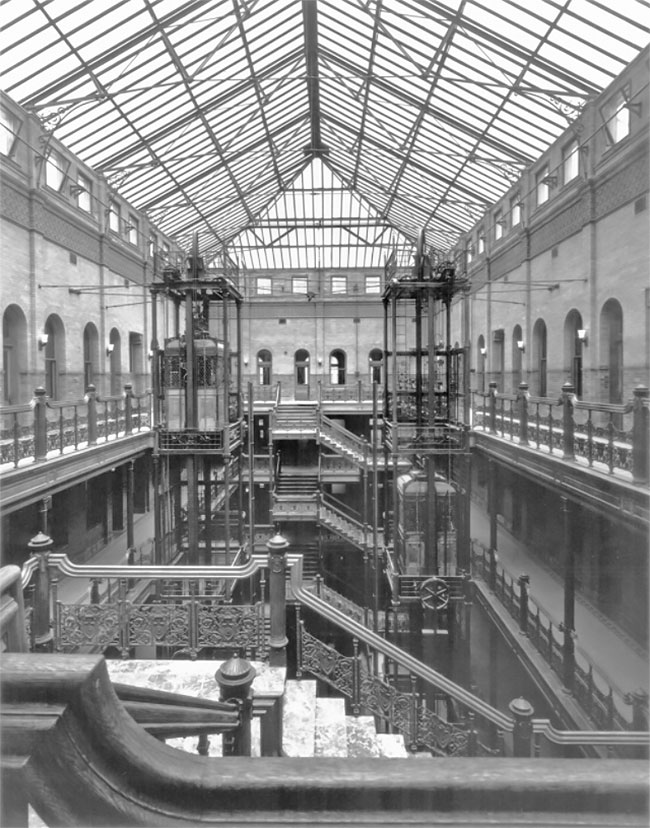 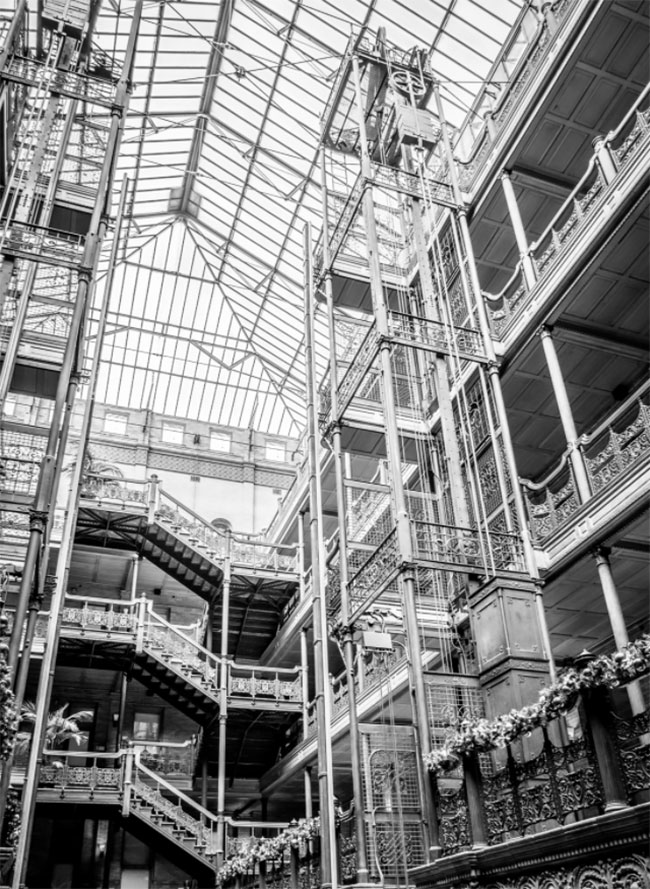 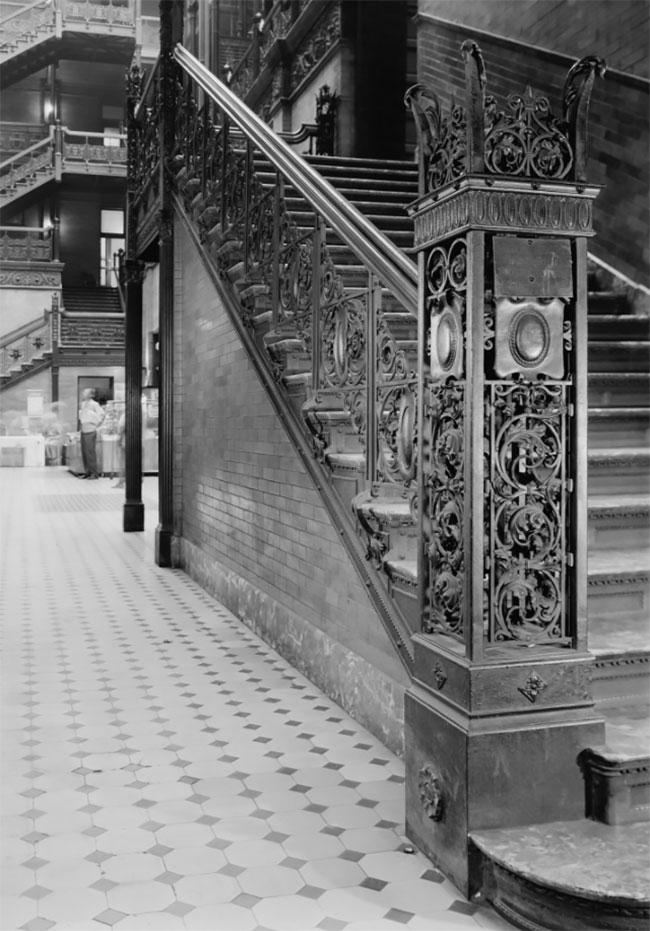 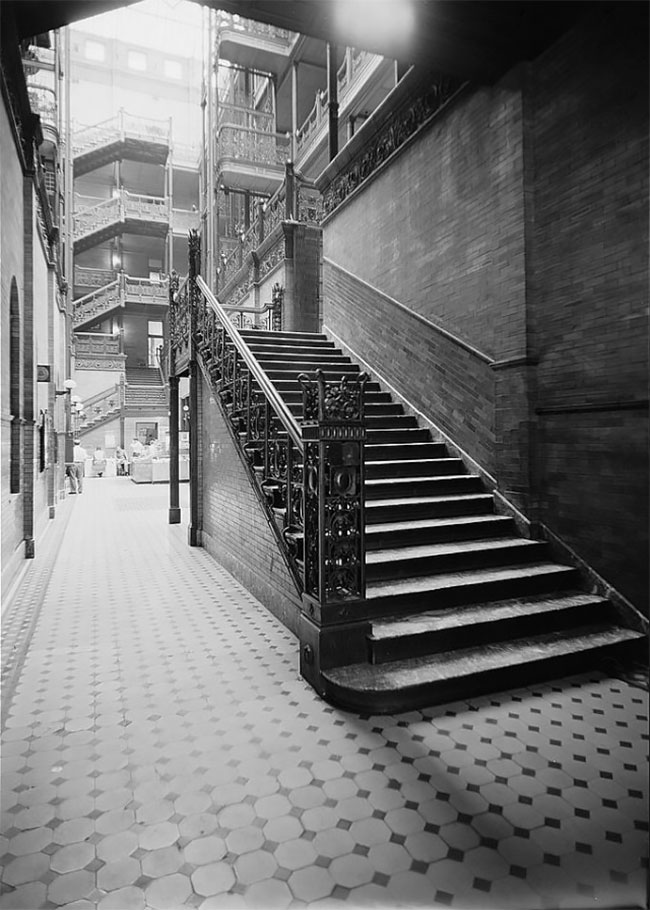