Wars never really end, because even though they may finish on the battlefield, many veterans bring the war back home and are forced to live with them for the rest of their lives.

“Bobby was hit by incoming artillery, sustaining burns over 60% of his body. He is pictured here with his daughter Layla.” 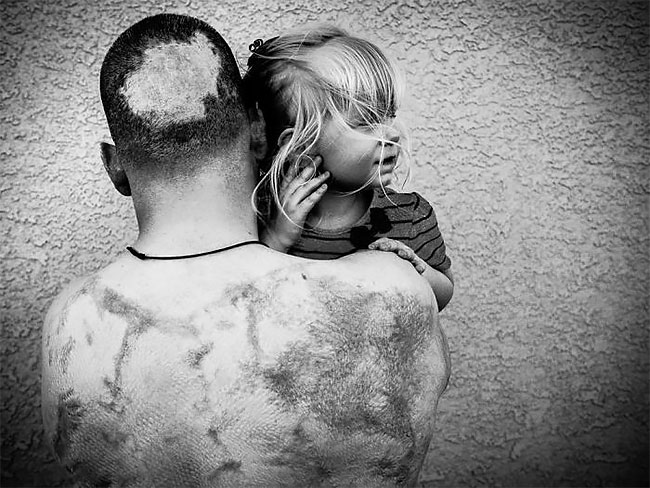 This sad and sobering truth is highlighted by photographers like David Jay and James Nachtwey, who have been documenting young and badly wounded American soldiers following their return home from wars in Iraq and Afghanistan.

Bobby Henline was trapped inside a transport when he was hit by a roadside bomb in Iraq. He was the only survivor. 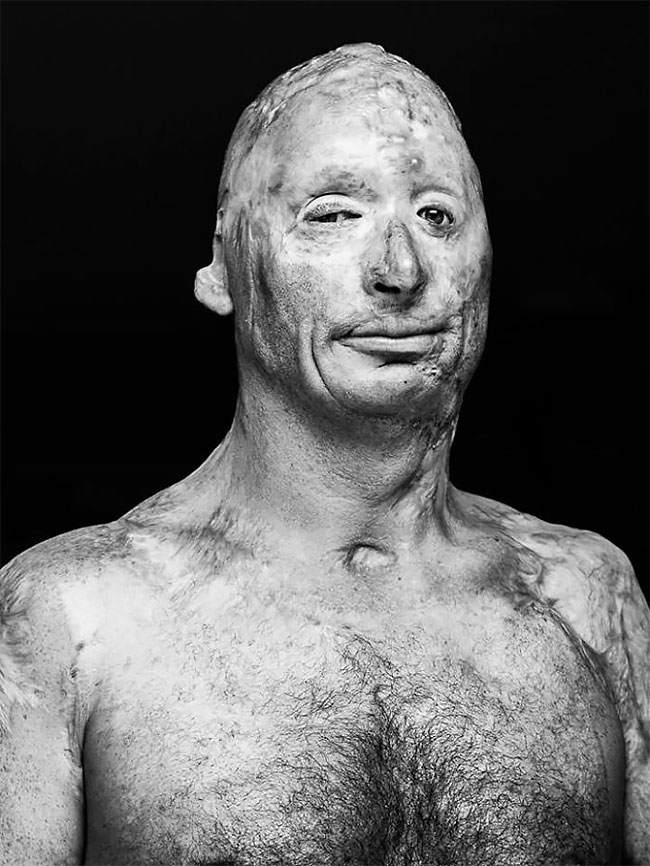 Jerral Hancock was driving a tank in Iraq. A roadside bomb pierced the armor, breaching the interior. Jarral lives in Lancaster with his two, beautiful children. 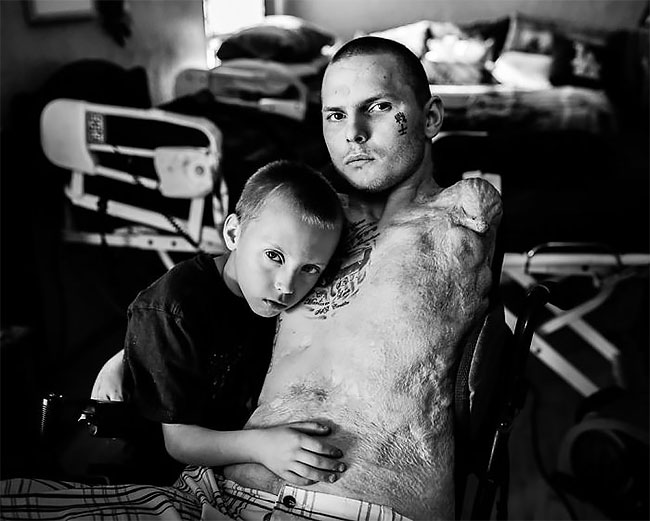 On November 12, 2011, army first lieutenant Nicholas was severely injured by an IED while on a foot-patrol in Panjwaii, Afghanistan. 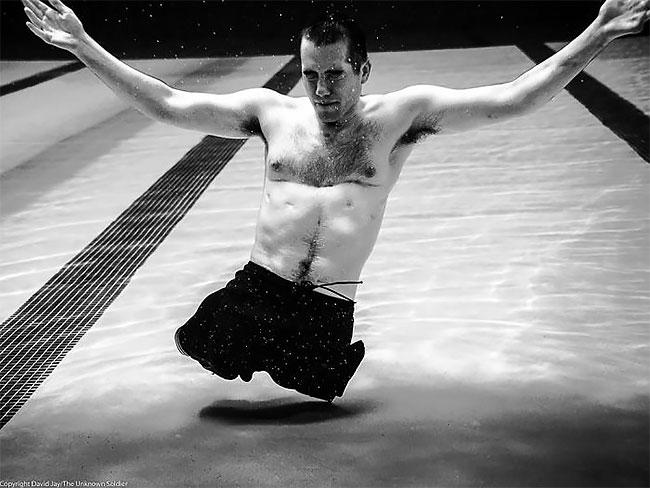 Marissa Strock was injured when her vehicle was struck by an IED buried in the road. She was 20 years old. 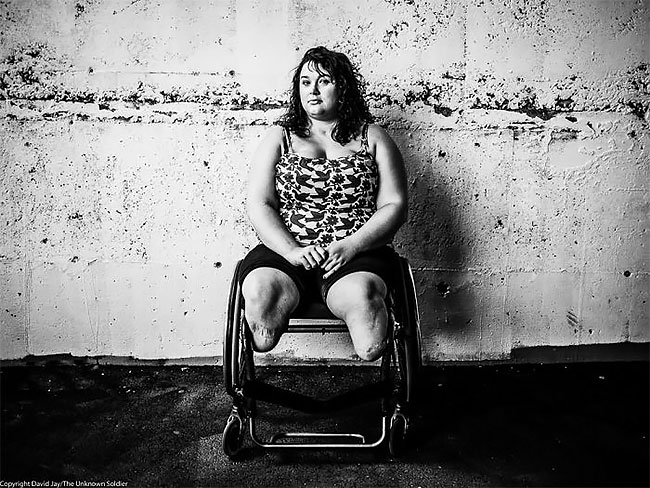 SSG Shilo Harris lives in Houston. Shilo was severely burned on February 19th, 2007 by a road side bomb estimated at 700 lbs. He lost three men out of a crew of 5. Only Shilo and his driver survived the blast. 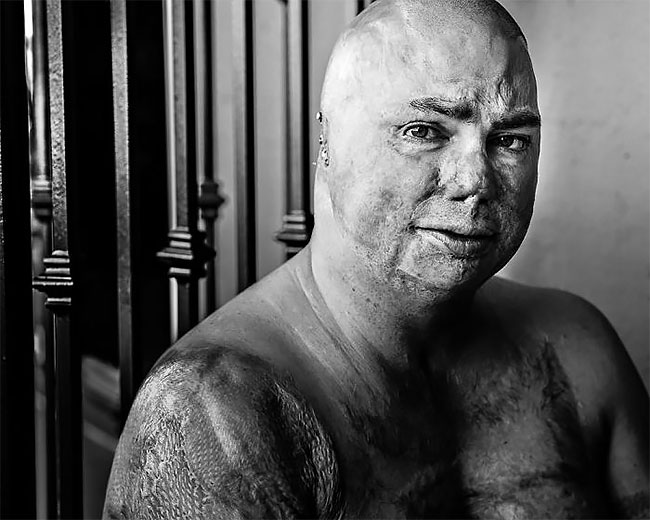 Tomas Young enlisted in the army two days after the 2001 September 11th attacks. Five days after being sent to Iraq, he was shot in the spine while riding in an unarmored vehicle in Sadr City, leaving him paralyzed. He died in 2014 (about a year and a half after this photo was taken) due to complications from his injuries. 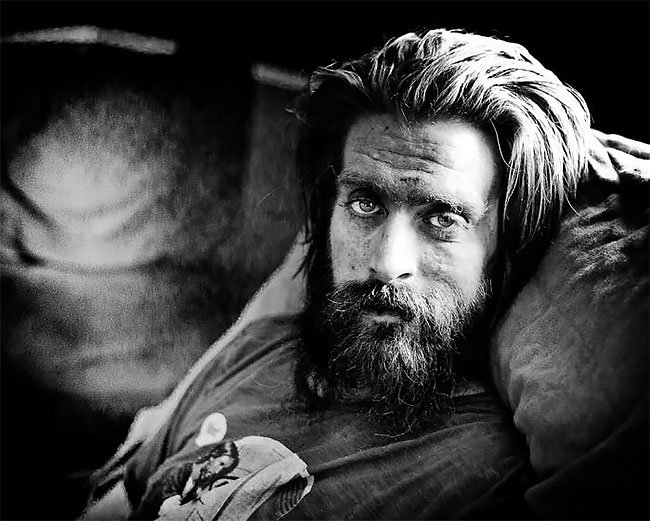 Army staff sergeant Allan Armstrong was deployed to Iraq and Afghanistan four times. He had just finished training when a motorcycle crash took his leg. He has since placed first in the 2014 Warrior Games in the 100 and 200 meter sprints. 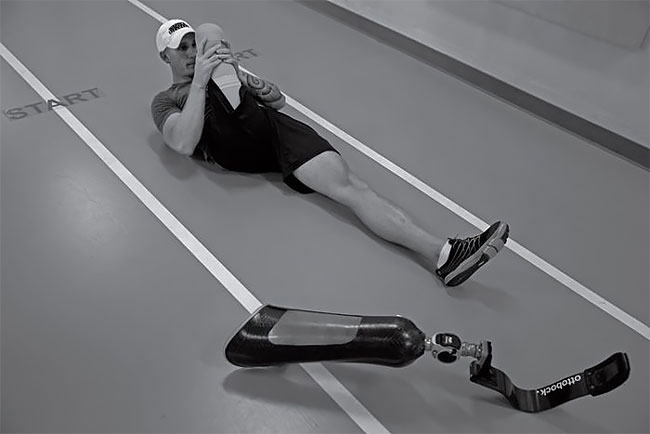 Cedric King lost both of his legs to an IED in Afghanistan. His daughters talked him into trying swimming, and from there he finished the 2014 Boston Marathon in just over six hours; completed a Half Ironman race, and the New York City marathon. He is also a motivational speaker. 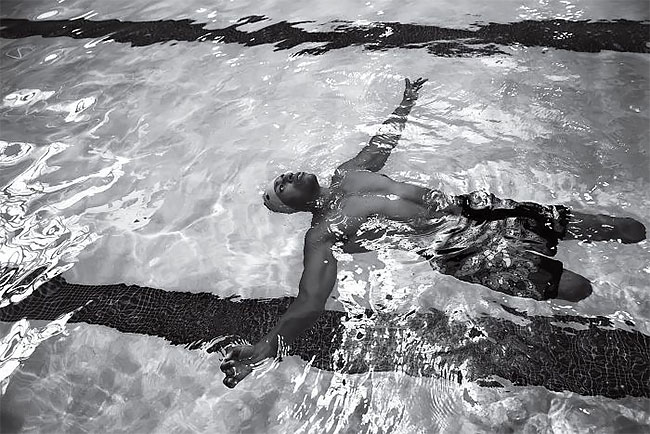 First Lieutenant Jason Pak On Dec. 13, 2012 was on a foot patrol in Zangabad, Afghanistan when an IED exploded. The blast took Jason’s legs (and part of his hand) but it could not take his spirit. 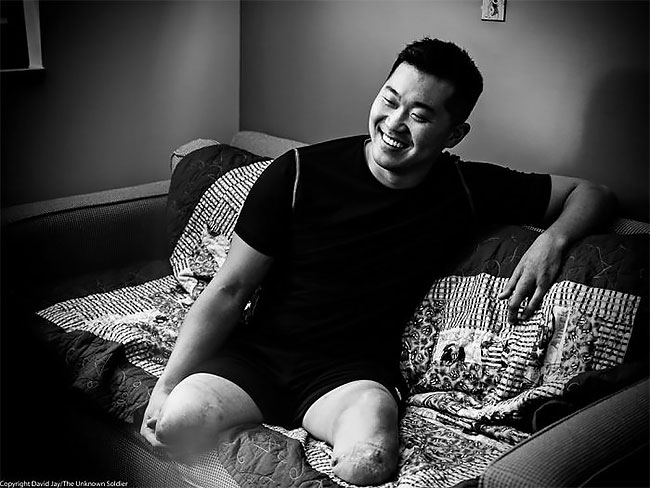 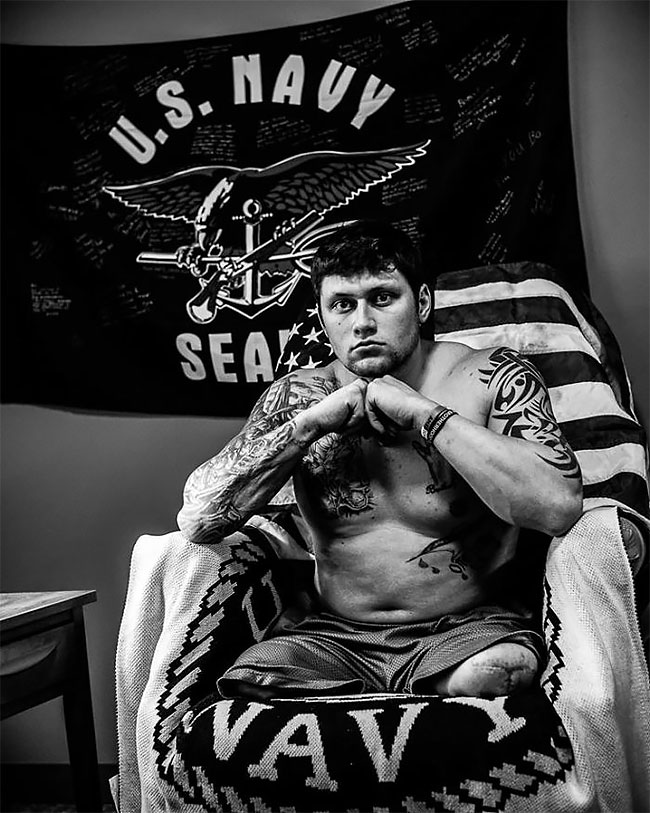 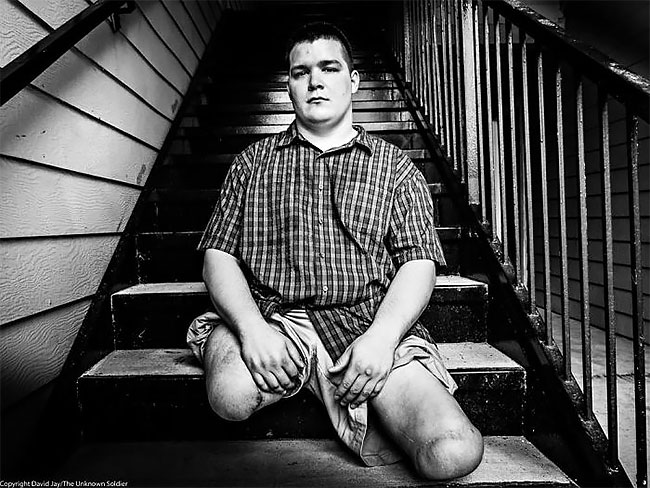 Joel, now 26, was injured in Iraq at age 20. Severely burned, blinded, a leg lost and over 90 surgeries later. 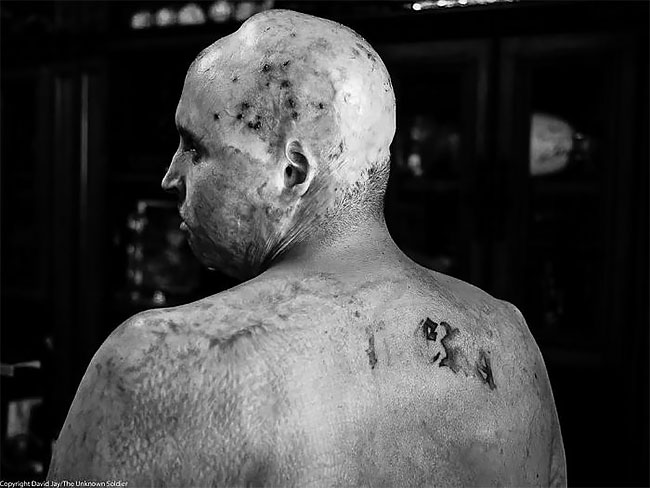 Army combat medic Sergeant Adam Hartswick lost his legs and suffered a brain injury while treating wounded soldiers in Afghanistan. He is in virtual-reality therapy, and has learned to walk again. 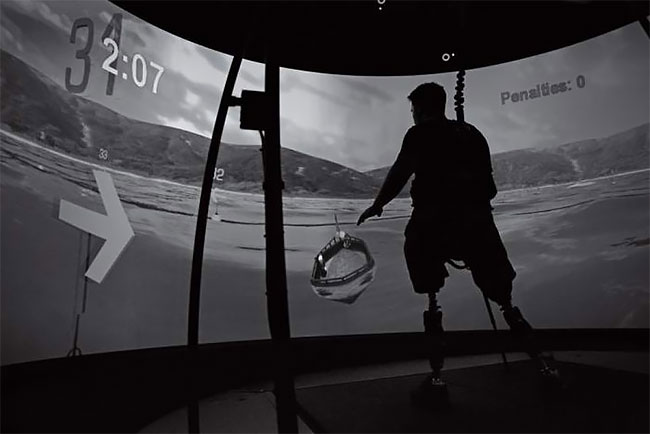 Marine CPL Christian Brown at the Walter Reed Medical Center. On Dec. 13, 2011, Christian was leading his squad on foot patrol in Helmand Province, Afghanistan when he stepped on an improvised explosive device. Both of his legs were blown off- one above the knee, the other below the hip. Just four days prior, under heavy enemy fire, Christian had carried a mortally wounded Marine almost 1,000 feet to a hovering helicopter. 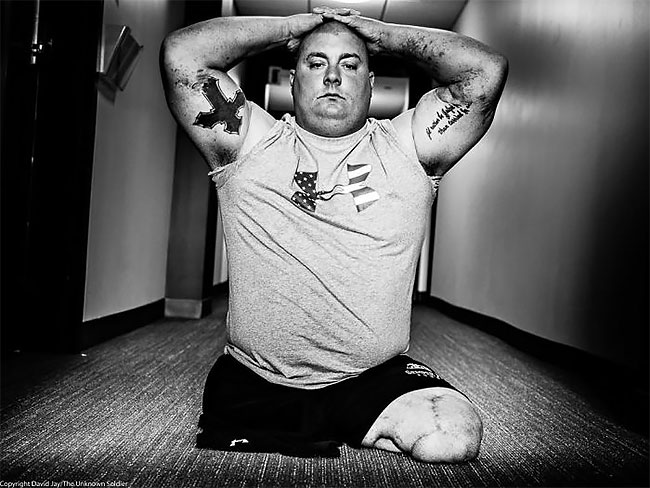 Daniel stepped on a IED, losing one leg and destroying the other. 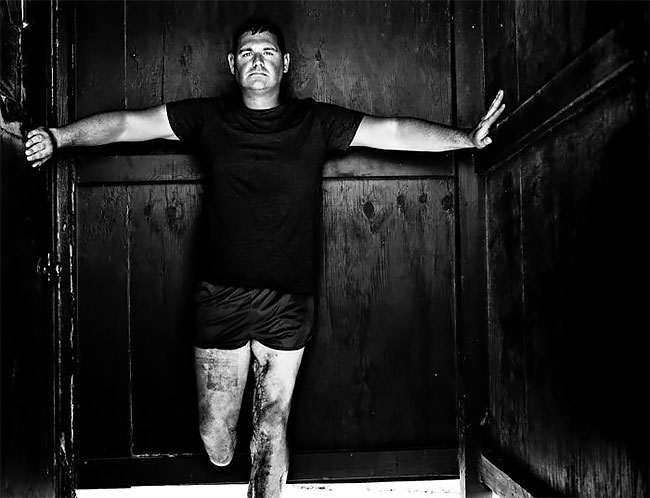 Army Specialist Stephanie Morris suffered leg injuries in an attack in Afghanistan. With physical therapy, she has since run the Army ten-miler. 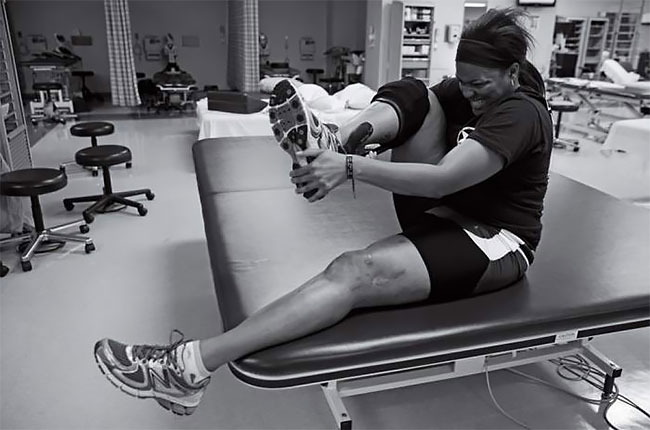 On June 8, 2013, in Paktika Province, Afghanistan, Major Matt was shot along with five others by a member of the Afghan National Army. The bullet severed his femoral artery resulting in the amputation of his leg. 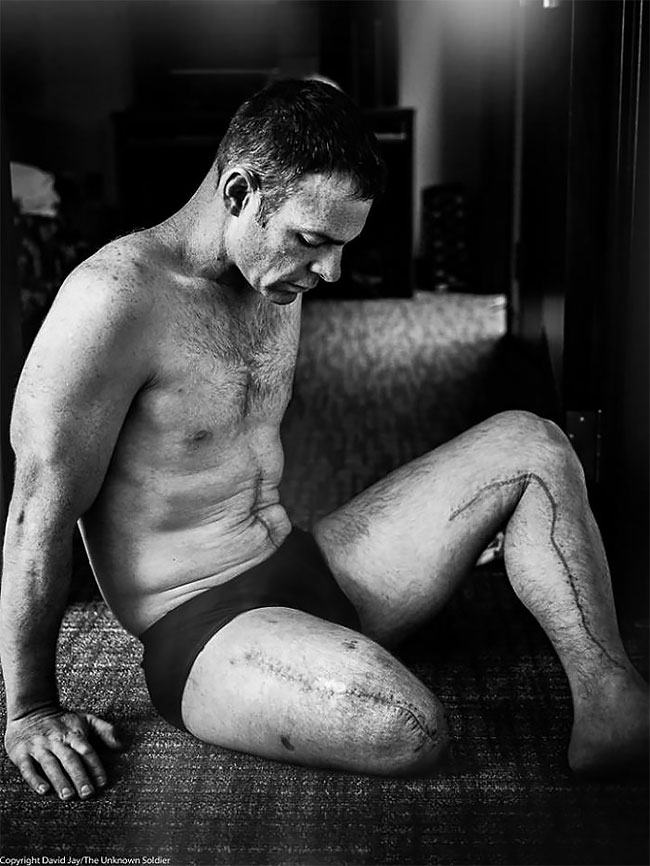 Retired Navy hospital corpsman Jose Ramos lost an arm in an Iraqi rocket attack. He expects to participate in the 2016 Paralympics.

“Running is what I do to relax,” he says. 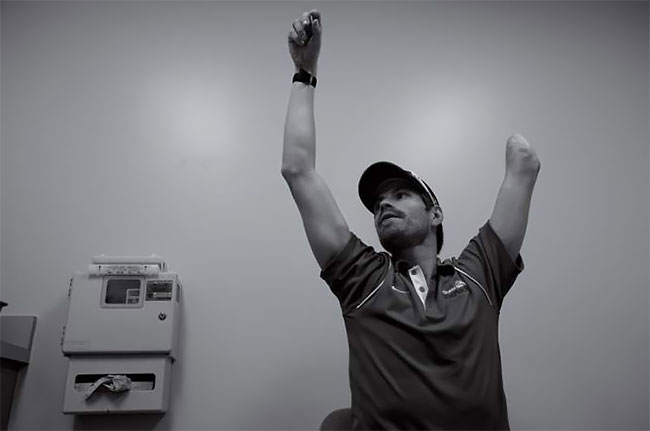 Retired Army Captain Wayne Waldon lost a leg in Baghdad, Iraq. Seven years later, he not only walks, but is an adaptive snowboarding champion.

“The prosthetic leg doesn’t feel stuck to me anymore,” he says. “It has become part of me.” 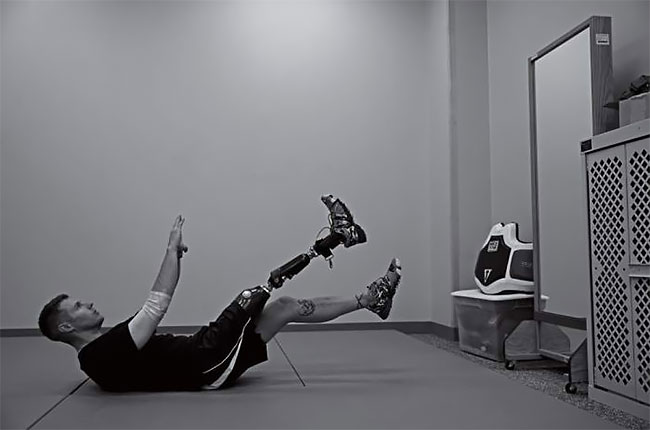 Incredibly Detailed Beauty And The Beast-Themed Wedding Photo Shoot Brings To Life The Disney Classic
Publicity Photos Of Marilyn Monroe Playing The Ukulele For “Some Like It Hot” In 1959
Breathtaking Winning Images of The 2021 Drone Photo Awards
Surfer Doesn't Let Polar Vortex Stop Him From Catching Waves On The Great Lakes
Photographer Spends 10 Years Photographing Same Bench, Captures More Than He Expects
Sony World Photography Awards 2017 Shortlist
Photographer Wakes Up Early Every Day To Capture The Beauty Of Winter
This Instagram Account Documents a World of Anonymous Street Style in New York
A Fascinating Photo Project About The Reflection We Want To See In The Mirror
Meet Amina Ependieva – A Chechen Girl Who Is Admired For Her Unusual Beauty
“After the Apocalypse” by Photographer Lori Nix
Surreal & Wild Creatures Emerge From Thrown Sand In Photographs By Claire Droppert
Stunning Black and White Photos of Chicago in 1988
Russian Industrial Crane Manufacturer Presented Its Sensual Calendar for 2021
Breaking Stereotypes Of Beauty: Fine Art Photographer Takes Stunning Portraits Using Clear Water
"We Were Once Alive": 100-Year-Old Portraits from Rural Sweden by John Alinder
This Photograprer Has Captured A Bunch Of Little Caesar’s Pizza Pies In Unusual Locations And Situations Throughout LA
45 Glamorous Photos Of Young Sophie Marceau In The 1980s
Belgian Man Discovered Stash Of Cars Hidden In Abandoned Quarry Since World War II
Georgian Photographer Makes “Autoportrait” Series To Convey Her Feelings Towards Art
12 Hilariously Honest Dog Breed Slogans
Shooting Under the Antarctic Ice
Spectacular Winning Images from The Nikon Small World Photomicrography Contest 2020
Daredevil Photographer And A Storm Chaser Captures Stunning Pictures Of Natural Disasters
after, decade, honest, middle, photos, veterans