Probably anyone can agree that classic famous paintings by Leonardo Da Vinci or Pablo Piccaso will always be among some of the most appreciated art pieces in history. After all, who doesn’t know “Mona Lisa”? Fun fact: over 6 million people visit this famous painting at the Louvre each year!

But, have you ever thought about what happened while these famous paintings were being made? Was it easy for models to pose standing or sitting still, barely moving, and waiting patiently for the painting to be done?

Well, Russian artist, Lesya Guseva has all the answers for you! A while ago, we presented you with her funny series where she showed what several famous characters would look like if they had aged. This time, Lesya decided to create a new series where she shows what was happening behind the scenes of famous paintings during their creation.

Curious? Scroll down the page and check out the hilarious stories behind the most famous paintings!

“Lady with an Ermine” by Leonardo da Vinci 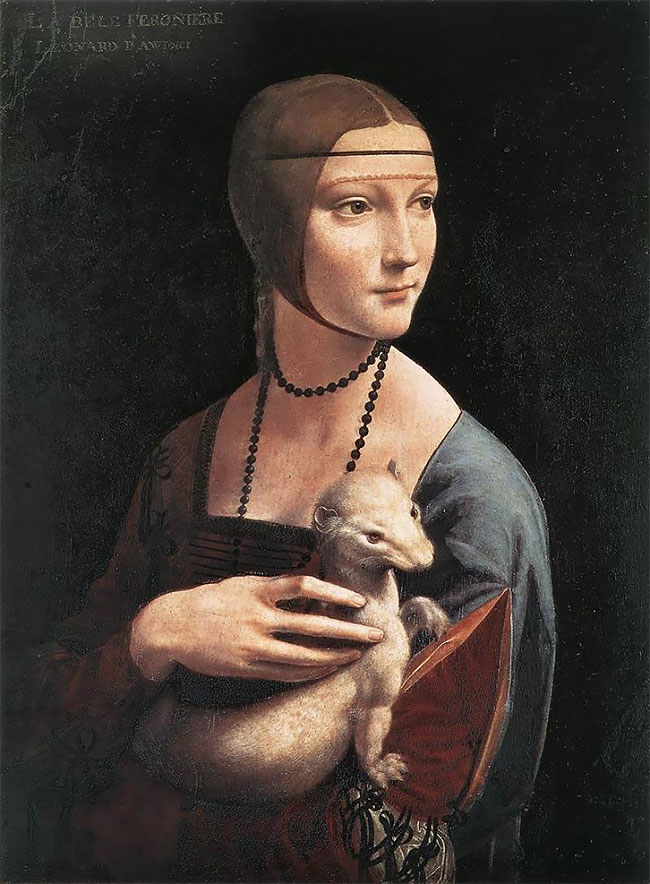 “And He Took a Little Bite” by Lesya Guseva 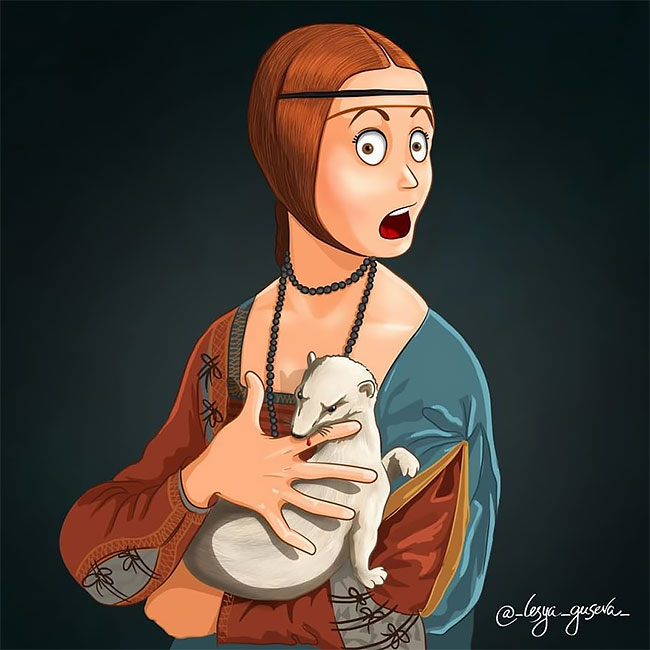 “Can you imagine this ermine sitting patiently and waiting while Leonardo was painting a portrait of them? I guess not! It seems to me that after a few minutes of waiting, he grabbed this lady’s finger with all his strength.”

“Girl with Peaches” by Valentin Serov 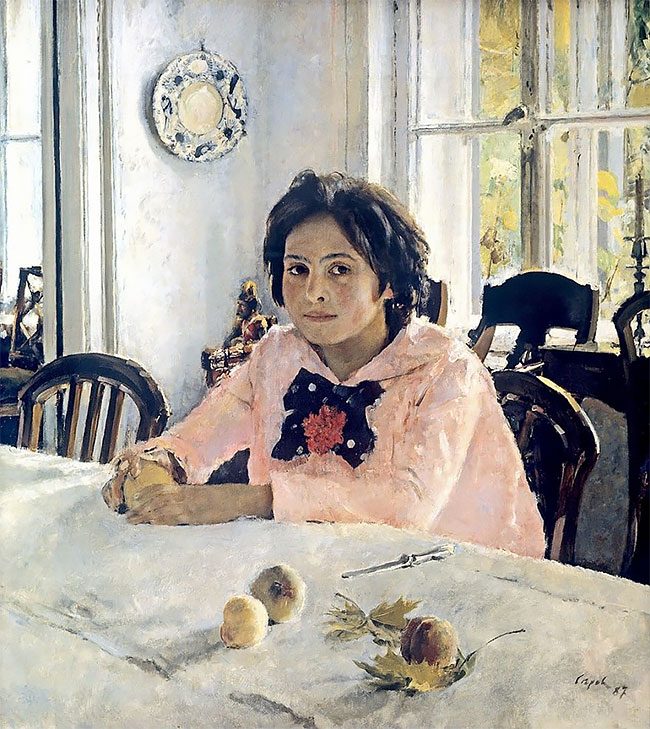 “Girl without Peaches” by Lesya Guseva 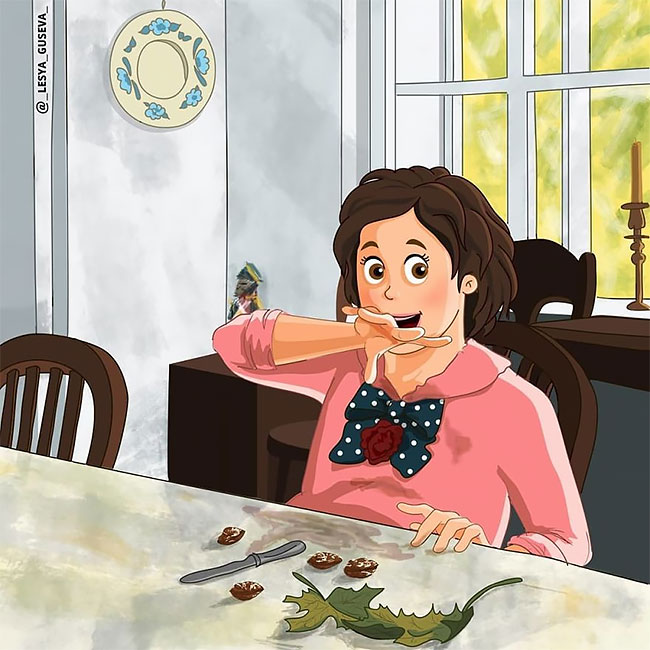 “Do you believe that this girl was left with peaches and she did not eat them but instead patiently waited? Personally, I don’t believe that! I think that when the artist turned away, she quickly ate the peaches. The peach juice was flowing down her chin and fingers, and, unfortunately, on her new blouse!”

“Girl on the ball” by Pablo Picasso 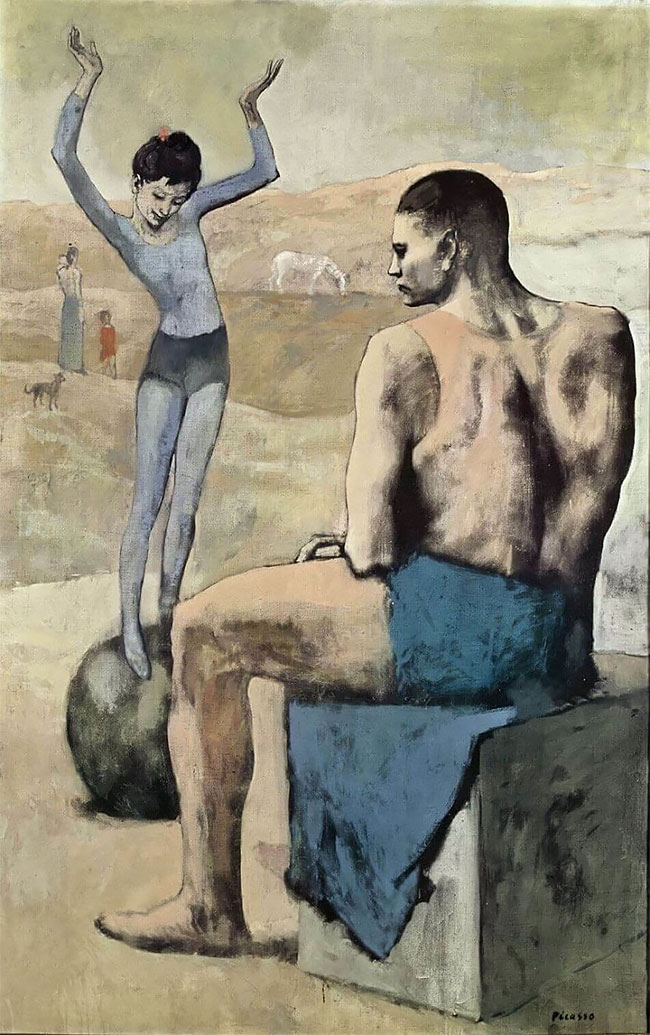 “The Girl Falling off the Ball” by Lesya Guseva 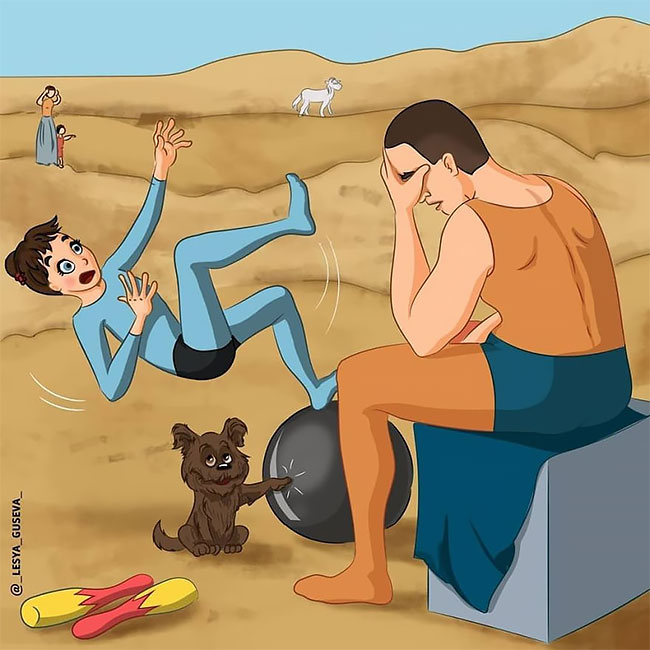 “Sometimes circus dogs are very insidious. It seems to me that this is how events developed behind the scenes of this famous picture.” 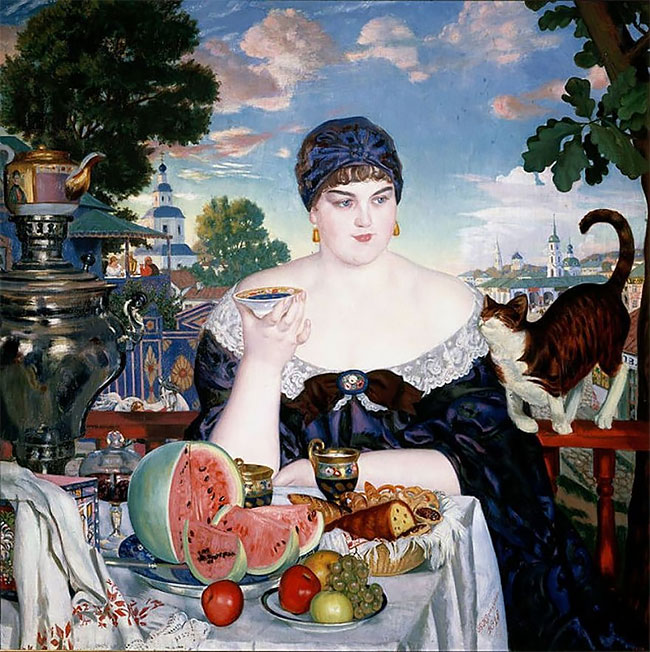 “The Kitten Missed the Jump” by Lesya Guseva 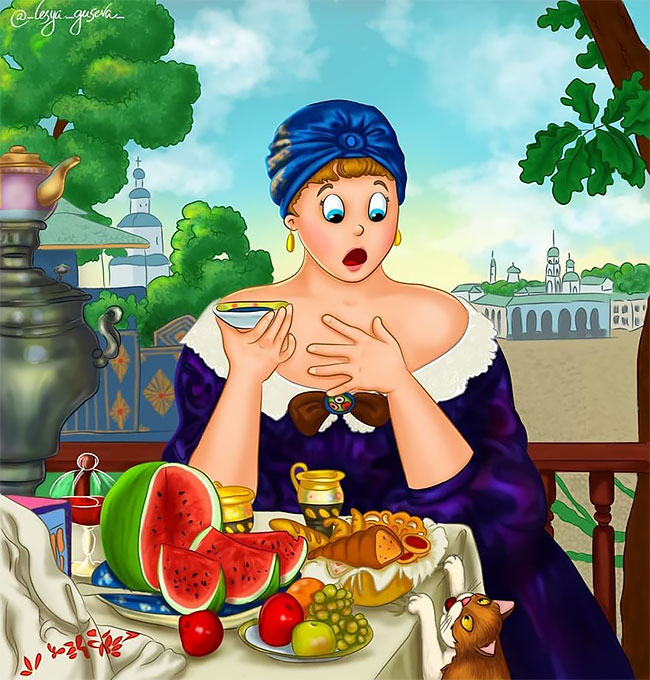 “I resent! Well, did you ever see a cat who would calmly stand on the railing and rub against the woman’s sleeve while there are so many interesting things on the table? Let’s be honest, that eventionally this cat jumped onto the table but.. surely missed it!”

“The Singing Butler” by Jack Vettriano 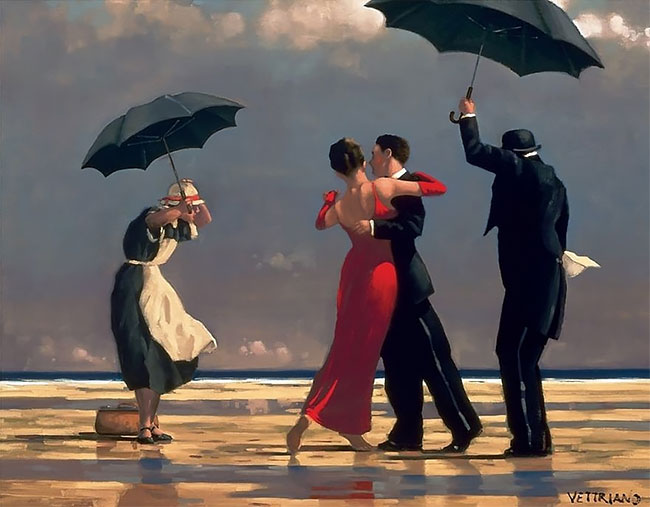 “Dancing Happily, Without Fear of Rain” by Lesya Guseva 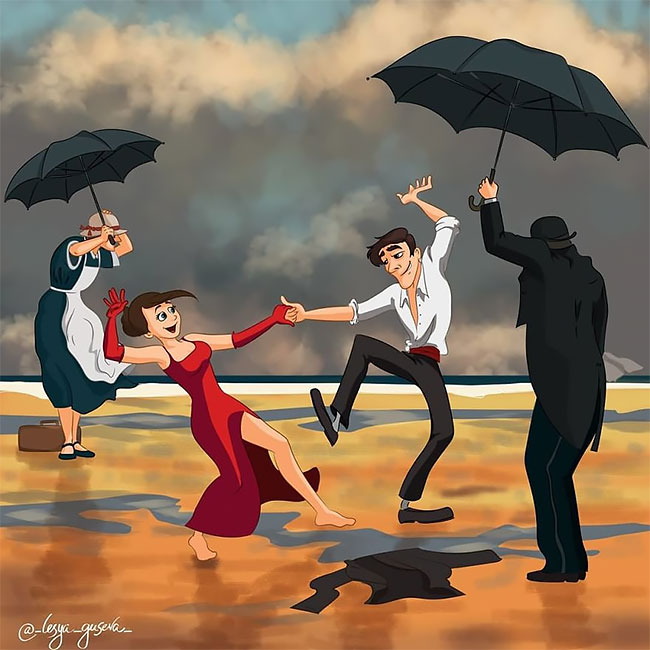 “I looked at this painting for a really long time and decided that it should have been even more fun than it was pictured. After all, what kind of a normal person would dance with a party dress on a deserted beach during the rain? Obviously, this couple was not sober!” 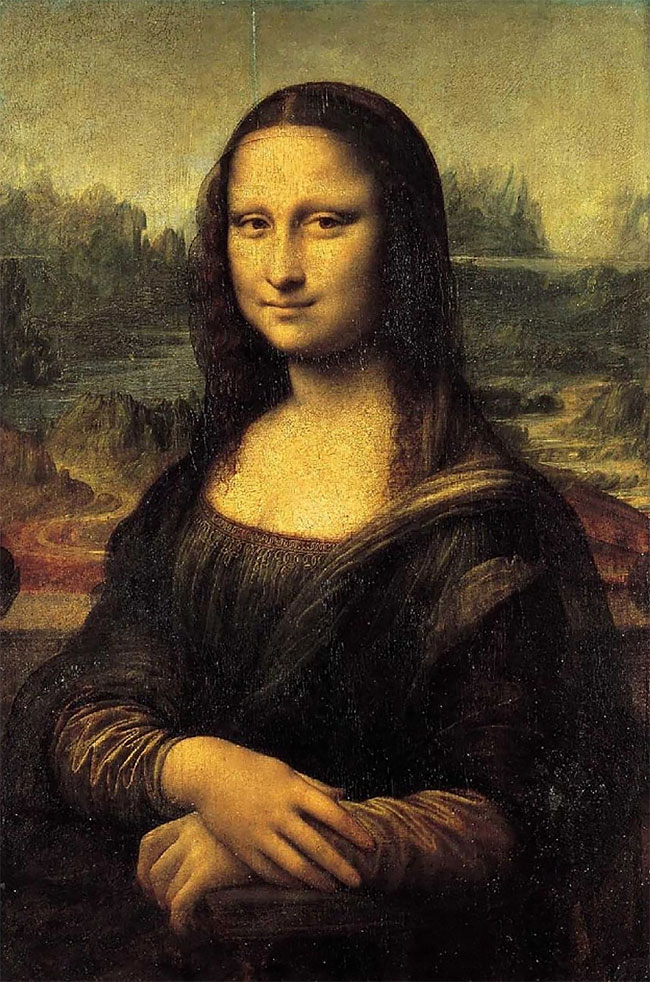 “The Secret of Eyebrows Revealed” by Lesya Guseva 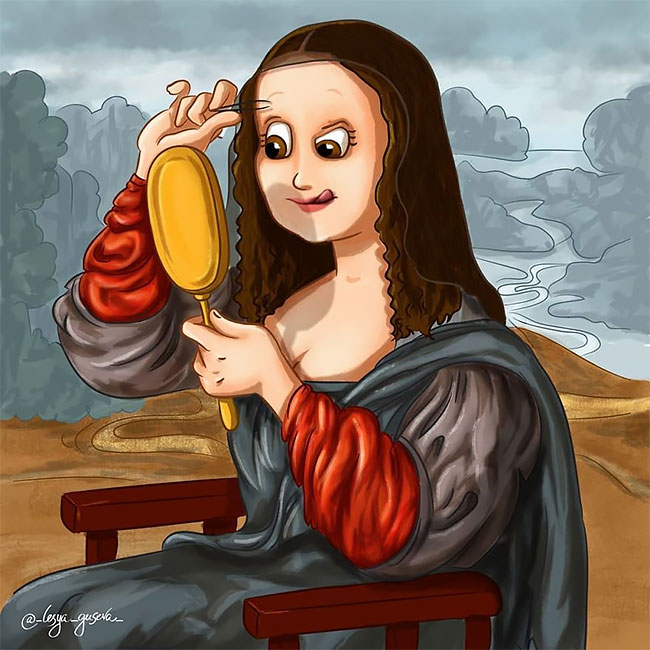 “Mona Lisa, darling, leave your eyebrows alone! There is almost nothing left! I imagine how Mona Lisa struggled to pull out another hair. I bet that afterward the famous painter asked her to smile and captured the smile which would last for centuries.”

22 Cartoons That Show How COVID-19 Affected Our Lives
This Artist Turns Picasso’s Portraits Into Fantastic 3D Sculptures
Spectacular Winning Images of the iCanvas Digital Art Award 2021
Creativity By Natasha Kinaru: Drawn Pictures Of Celebrities
This Artist Can Sneak Her Cats Into Any Painting And It’s Hilarious
"Arrival": The Superb Digital Nostalgic Artworks of Stew Romero
If 2017's Oscar-Nominated Movie Posters Told The Truth
Former Cartoonist Creates Cute Animal Tattoos To Show You A Life On The Wild Side
Artist Cosplays As Well-Known Characters, Celebrities And Paintings
Graphic Artist Reimagines Children’s Board Games As Superb Horror Movie Posters
Artist Created 30 Truthful Cartoons About Working From Home
Children With Down Syndrome Recreate Famous Paintings To Prove That Everyone Is A Work Of Art
Graham Annable
Chinese Artist Reimagines Cats And Dogs As Humans, And The Result Is On Point
"The Longest Journey": The Superb Post-Apocalyptic And Sci-Fi Concept Art By Ismail Inceoglu
An Artist Made A Colorful Floor Installations Inspired By The Optical Illusions
21 Watercolors That Show How The Sun And Shadows Change Cities
Artist Makes Semi-Realistic Fanarts Of Pop-Culture Characters
36 Widespread "Truths" That Are Totally Fake
Photographer Creates Imaginative Images Of Her Daughter And Her Shadow
Witty Illustrations Capture The Pitfalls And Contradictions Of Contemporary Life
Animal Portraits in The Style of Old Masters by Tein Lucasson
ECHOGRAPHY OF CHANGE - LADY GAGA and JULIE ANDREWS
Russian Blogger Makes Parodies Out Of Celebrity Photos, And More Than 20,000 Followers On Instagram Approve
classic, Lesya Guseva, paintings, recreated

Last Breath: Amazing Dark Horror, Bizarre And Nightmare Paintings By Oleg Vdovenko
How A Dog Should Wear Pants?
Guy Turns Bus Stop Into A Free Coffee Shop And Spreads A Little Joy
"Into A Dark Millenium": The Superb 3D Concept Artworks Of Dylan Kowalski
Everyone I Love Is Dead: The Superb Dark Fantasy And Horror Art Works Of Piotr Foksowicz
Futuristic And Dreamlike Photo Manipulations By Eashan Misra
Spirited Away: A Miyazaki Fan Recreated The Bathing House With An Impressive Model
"We Don’t Need Your Internet!": A Designer Imagined What the Logos of Famous Companies Would Look Like if They Stayed in Russia
5 Must Seen Yoga Poses
Fumetti: The Collection of Finest Examples of Sleazy Lowbrow Art the World Has Ever Known
Source of inspiration since 2007. Proudly hosted by WebHostingBuzz.
Privacy Policy · Terms of Service · Content Removal Policy 🇺🇦 ❤️