Louie Mattar’s Cadillac, the Car That Has Everything, 1952 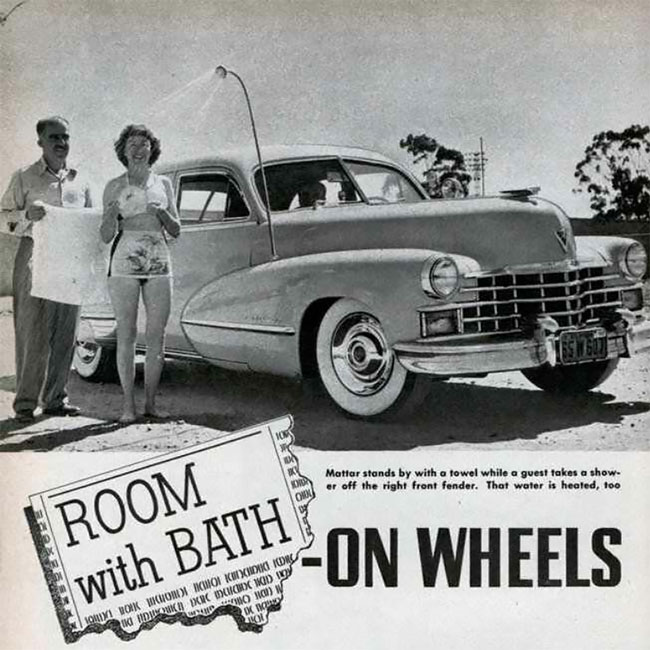 Louie Mattar, a San Diego garage owner with a big imagination, who turned his 1947 Cadillac into a how-to guide for four-wheeled DIYers everywhere. When he bought a brand new Cadillac four years ago, the extra equipment his dealer offered was not enough and Mattar started to add a weird assortment of things that other motorists can only dream of. 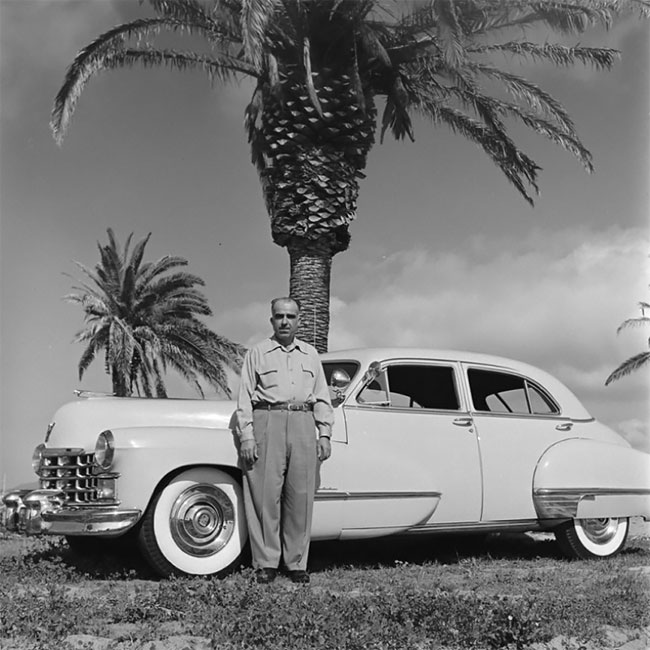 Doing most of the work himself, he put in a shower, coiling the pipes from his 50-gallon water tanks around the exhaust manifold for the hot water. A pumping system was crammed under the hood. Next to the taillight went a drinking fountain and under the dashboard a tape recorder and a bar with spigots for whisky, water and soda. In the back seat he put a washing machine, a stove and even included a kitchen sink. All this took four years to do and cost Mattar better than $14,000.

Louis Mattar pulls the makings of a meal from the trunk of his heavily modified 1947 Cadillac. 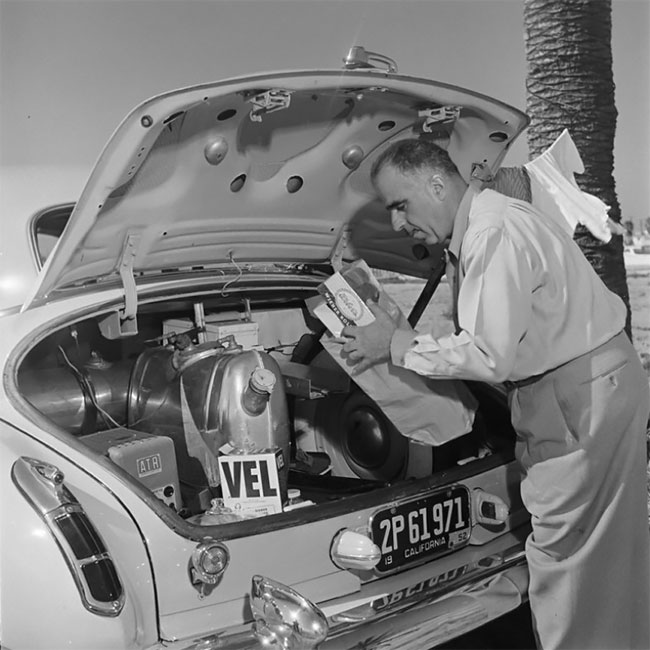 Later that year, in Sept. 1952, Mattar’s ultra-tricked-out Caddy set a world endurance non-stop record (since eclipsed) when three drivers, working in shifts, traveled round-trip from San Diego to New York and back — 6,300 miles — in one week. It later traveled — virtually non-stop, due to Mattar’s innovations that allowed it to refuel while driving, etc. — from Anchorage, Alaska, to Mexico City.

The car, along with a trailer, which Mattar also custom made, is now in the San Diego Automotive Museum in Balboa Park. 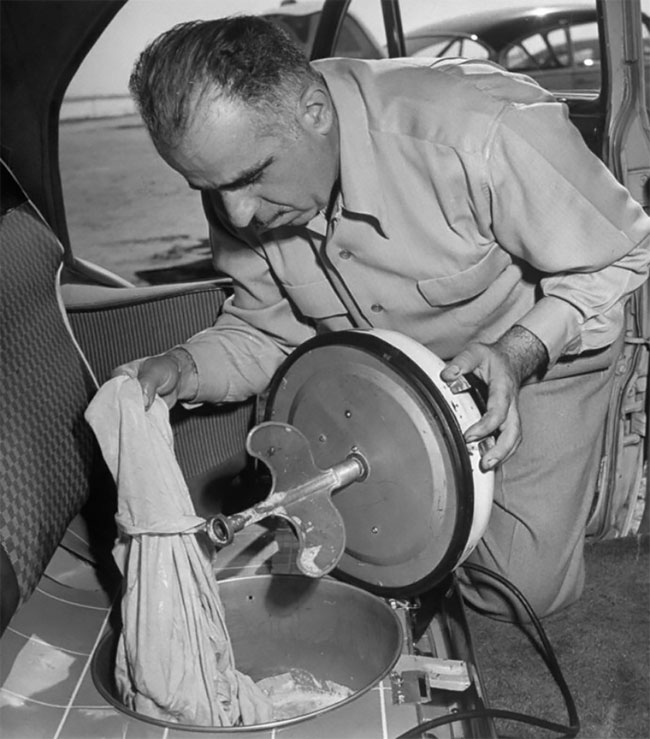 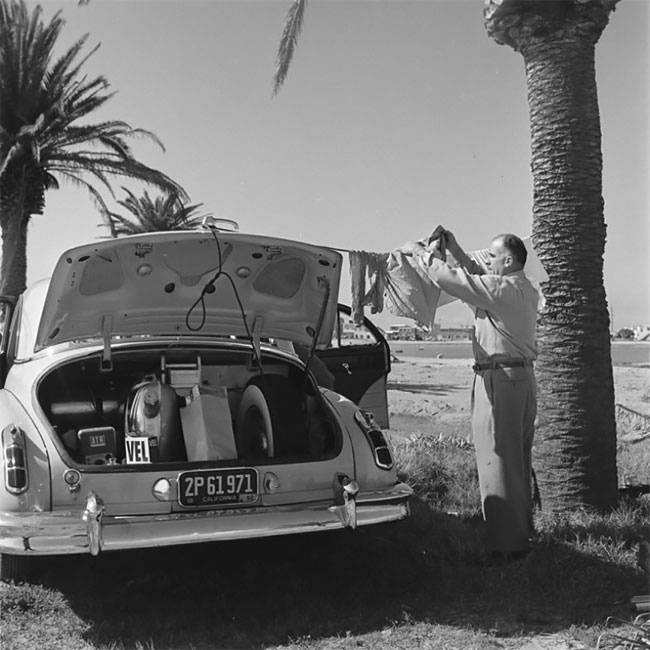 Ironing is easy for Mrs. Mattar with arm rest as board. Toaster or razor can be plugged in here. 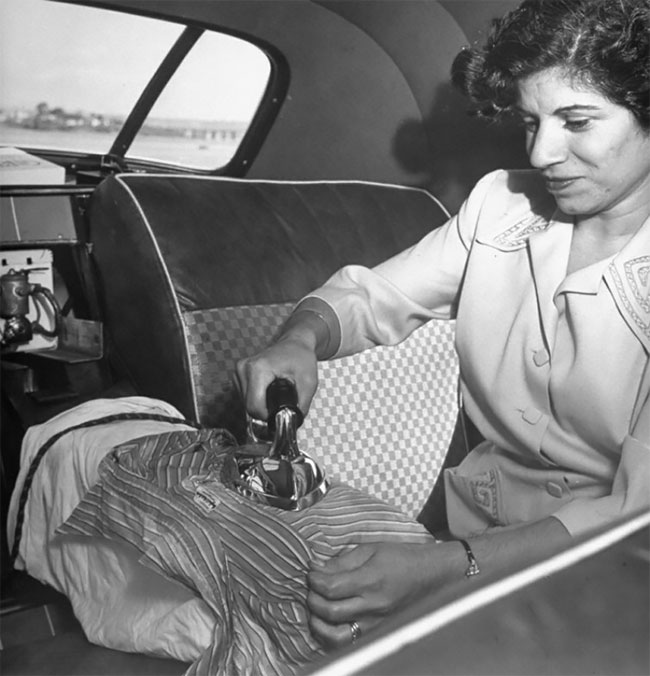 Louis Mattar enjoys a pull on the water pipe he installed in his heavily modified 1947 Cadillac. 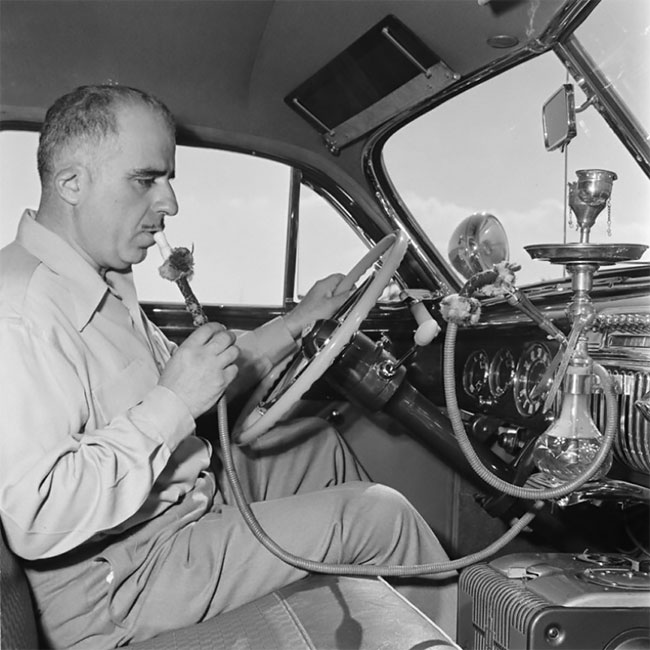 Jackie Smithwick, friend of the Mattars’, takes a warm water shower next to front fender. 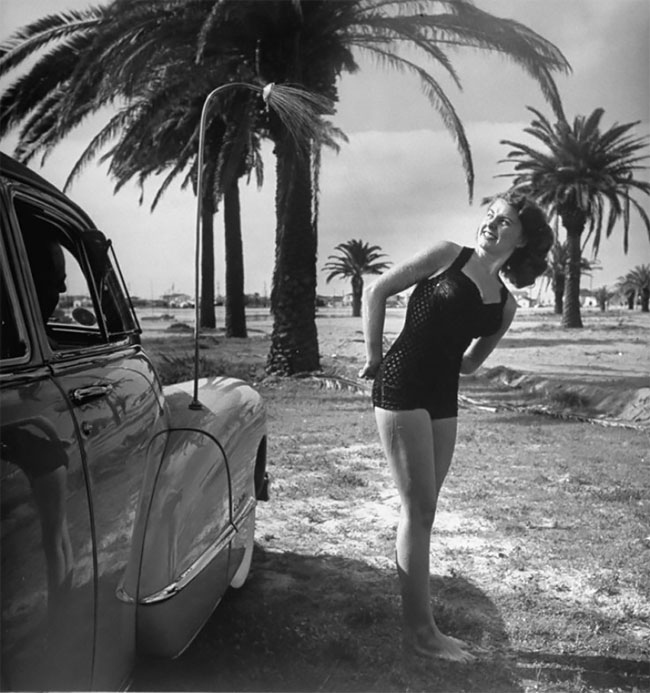 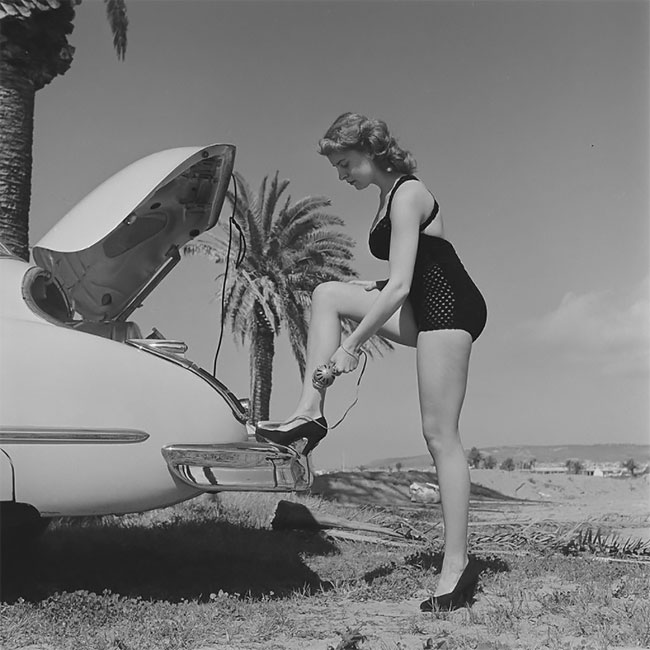 A boy drinks from a water fountain that Louis Mattar installed in his 1947 Cadillac. 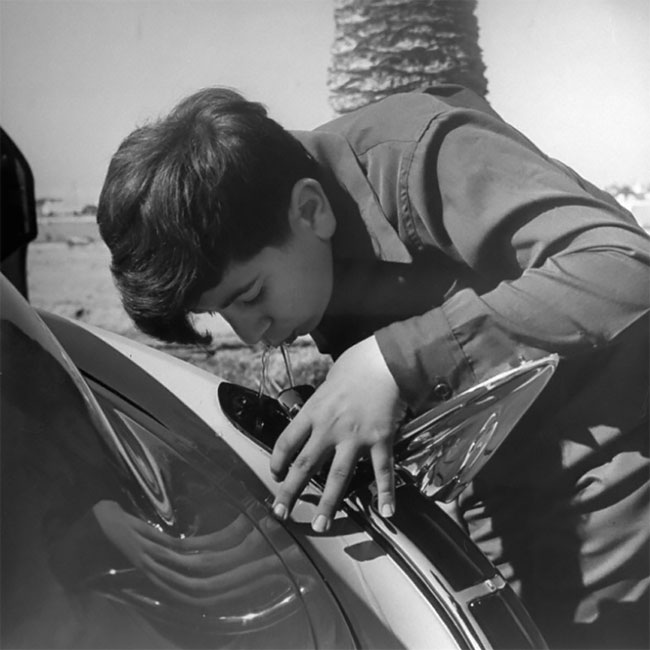 Cooking hot dogs, Mattar uses homemade stove which slides forward into the back seat from trunk. 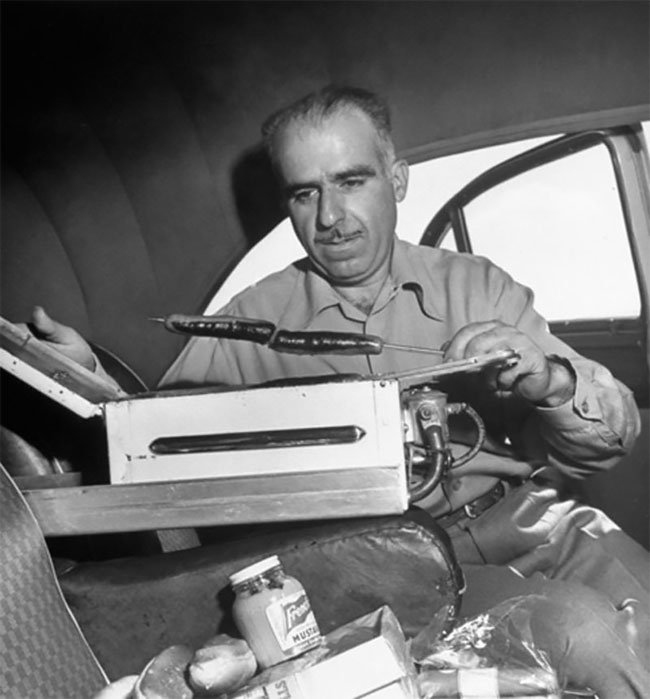 A picnic on the beach, courtesy of Louis Mattar’s tricked-out 1947 Cadillac. 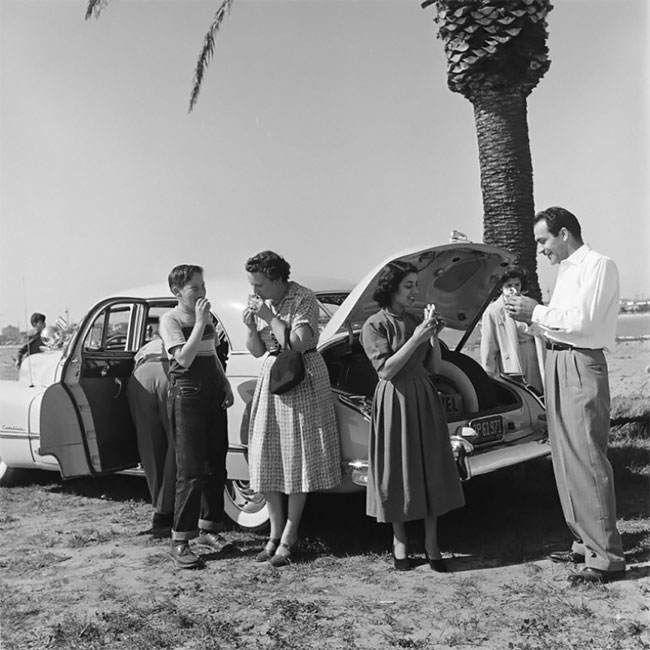 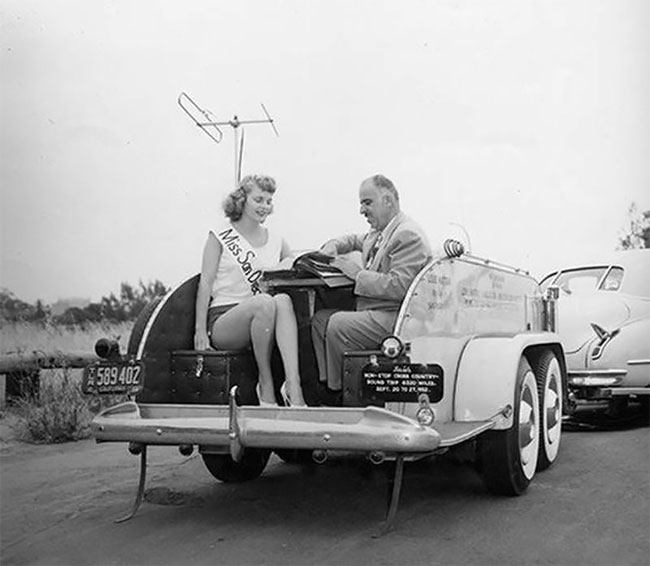 DIY Protective LED Face Mask Warns To Stay Away And Responds To Voice
The Best Photos Of The Spectacular One-Off 1965 Dodge Deora Pickup Truck
Oceanco Debuts Unique 115-Meter-Long Megayacht That Will Truly Sail You In Style
This Artist's Huge Kinetic Big-Wheel Bike Features Technology You've Never Seen On A Bike
"The League Of Extraordinary Gentlemen": Superb-Looking Captain Nemo’s Nautilus Car Is For Sale
Chinese Segway
Symbiosis Of Retro And Modernity: Russian Car By Bilenkin Vintage
Watch 3-Year-Old Kid And Volvo Truck In The 'World’s Largest Unboxing'
Batmobile With Tank Engine Put Up For Sale In Russia
A Group Of Friends In Estonia Have Turned A 1984 Audi 100 Into A Cosy Wood-Fired Sauna
What is the WEEE Man and What does He Represent?
Green 3D Printer Prints Living Designs From Organic “Ink”
Alien-like Flowers Seen Under the Microscope
Vivian Maier: Lost Photographs Of 1950s New York
Amazing Photographs of Auto Transporters From the 1970s and 1980s
Anthropocene Mapping: The Human Influence On Earth
An English Student’s Street Photographs of Edinburgh In the 1950s and 1960s
Chinese Man Makes Power Bank Able To Charge 5,000 Smartphones
Customized “Pioneers” and the Road of Life
Glamorous Photos Of Marilyn Monroe Photographed By Ed Clark In 1950
Portraits of Swiss “Halbstarken” Girls With Very Big Hair in the 1950s and 1960s
1977 Pontiac Phantom, the Last Car Designed by Bill Mitchell, One of the Automobile Industry’s Best Known Designers
3D Printing Fashion: How I 3D-Printed Clothes at Home
Exploring the Deep Sea
1950s, cadillac, Louie Mattar