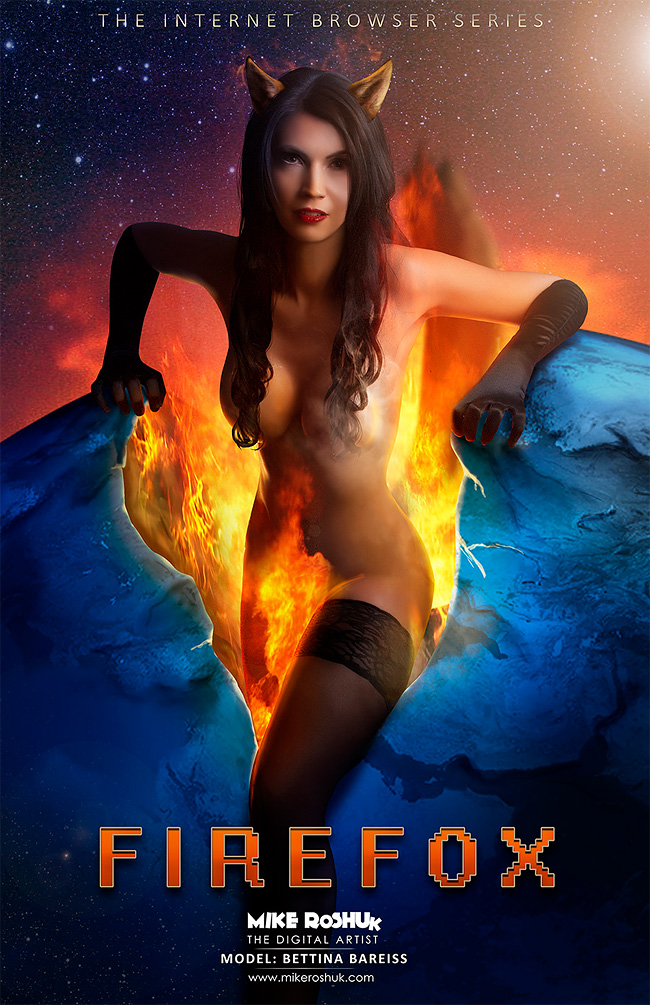 FIREFOX
“This was a fun challenge, mainly because I wanted to do something a bit different than what someone would expect. Lots of images of Firefox have been done already with a girl dressed up as (or drawn as) a fox hugging or wrapping themselves around the Earth. I did about 5 or 6 different concept sketches before ultimately deciding on this idea.” 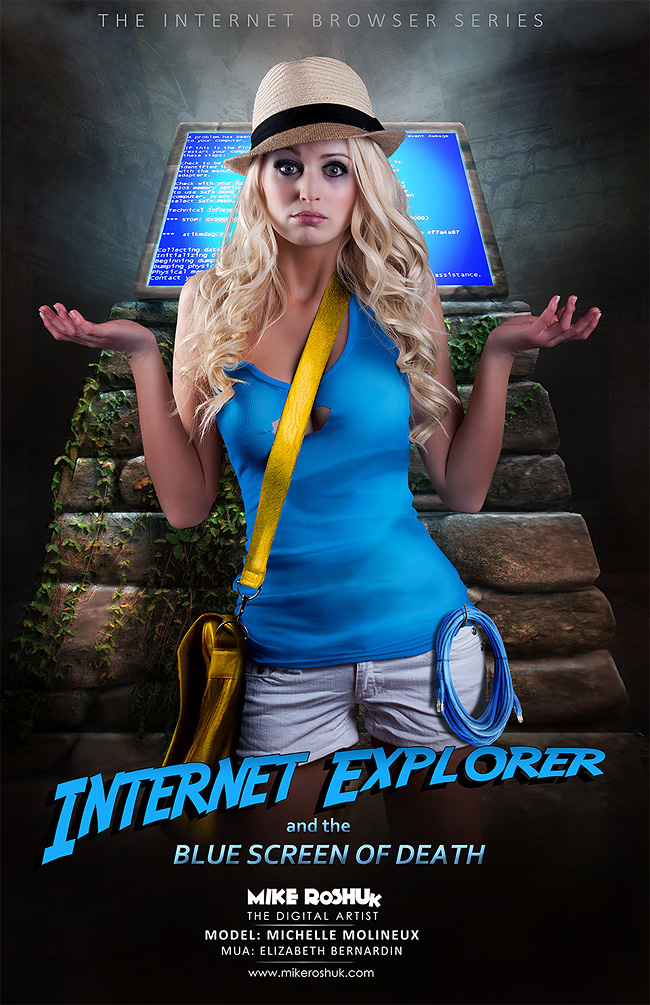 INTERNET EXPLORER (and the Blue Screen of Death)
“Well I wanted to play on the whole ‘Explorer’ theme so I decided to go with an Indiana Jones flair to this one. I wanted to incorporate the Internet Explorer logo itself into the image, so I created the blue ‘e’ in her shirt with the shadows and highlights, and painted the bag’s strap yellow to represent the “swoosh” the is part of IE’s logo.” 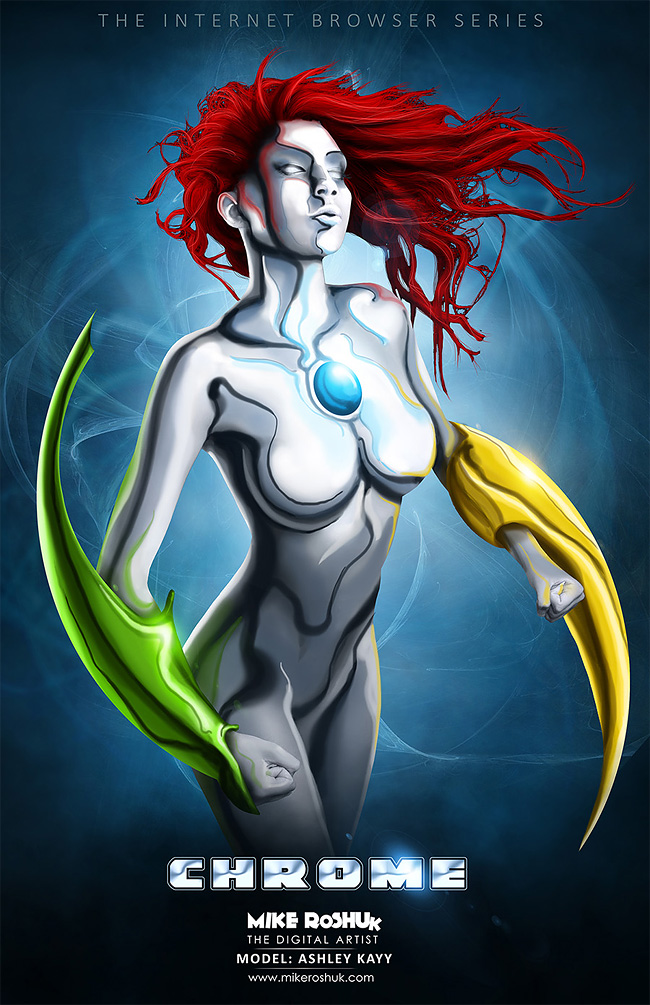 GOOGLE CHROME
“This was the first concept that popped into my head when I first got the idea for my Internet Browser series. Making a model appear as if she was made out of chrome was a no-brainer for this one, and I added the colored blades and flow of the hair to match the color scheme and placement of the browser’s logo.” 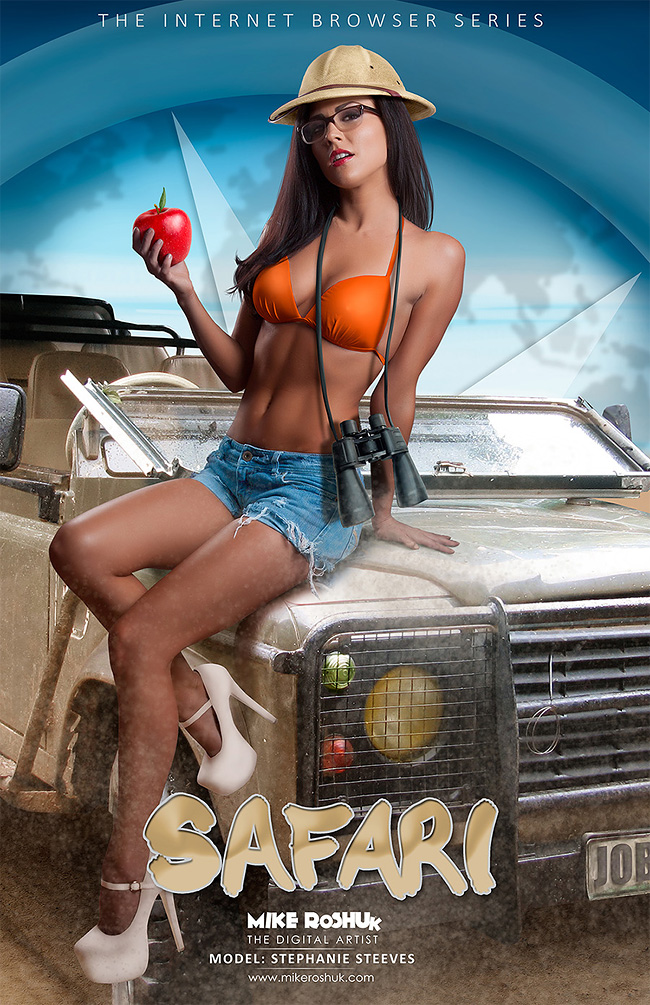 Apple’s SAFARI
“I was originally going to have her holding a Starbucks cup, just to play up on the stereotype, but decided to change it last minute to an Apple, just to make sure viewers get the connection. I made her bikini top orange and heels white to match the colors of the Safari logo’s compass pointer, and the colored lights of the jeep to match Safari’s browser navigation. Even put ‘Jobs’ on the license plate for the final touch.” 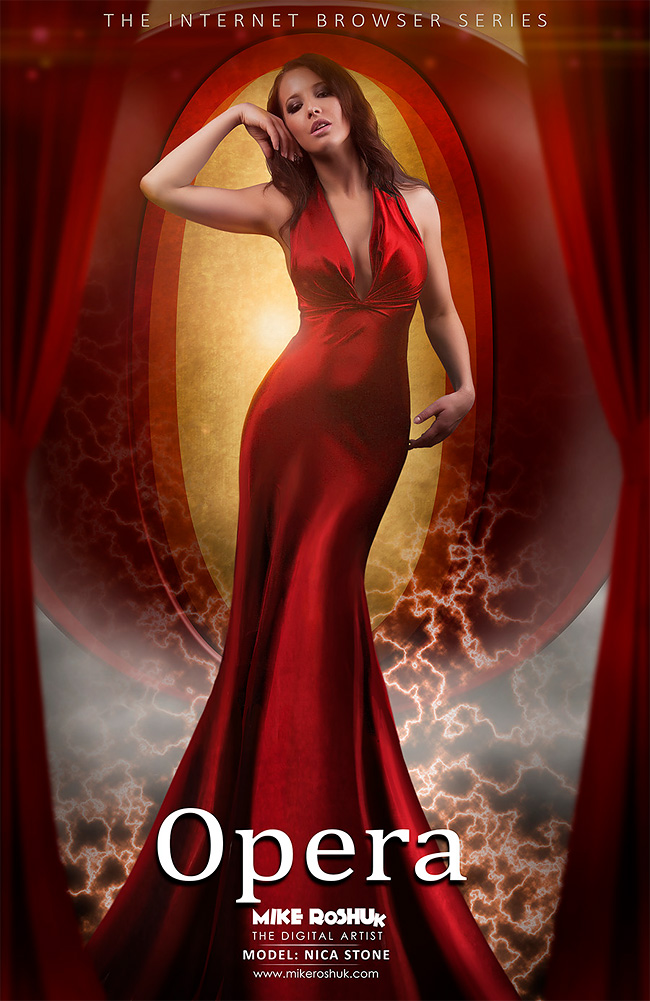 OPERA
“This one was a bit tough to do, mainly since there is not too many clear and well known stereotypes of the Opera Browser to play off of. In that sense, I decided to create the image with the model having a look of sophistication, as if it were immune to the stereotypes and mud-slinging of other browser fanatics. Incorporating the large red ‘O’ of the logo was a must, as well as creating an Opera setting with the red curtains.” 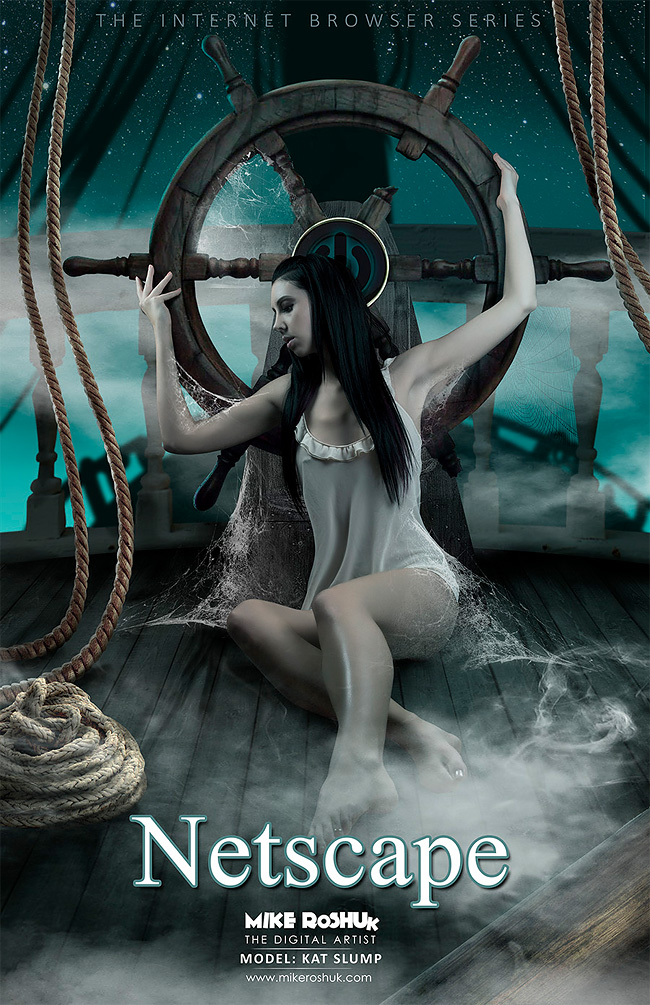 NETSCAPE
“Conceptually this one may be my favorite. I loved the Netscape logo with the ship’s wheel, and since Netscape is no longer used and long forgotten, I thought the image of an old abandoned pirate ship would be a great idea.”

Artist Uses His Feet To Create Gigantic ‘Game Of Thrones’ Snow Art In French Alps
The Adorable and Superb Surreal Art and Photo Manipulation by Jose Francese
Artist Painted This Beautiful Mural In Delft Blue Style
This Is How You Deal With People Who Don’t Park Between The Lines
Disney Girls in Real Life: An Artist Reimagined Some Of Disney's Most Famous Princess
Sensitive and Emotional Portrait Paintings by Nina Milke
Me & My Other Me
Street Artist Mobstr Unveils A Giant Mural In Vilnius, Lithuania
Netherworlds: The Fantastic Worlds of John Pak
The Double Standards Of Our Society Revealed In 47 Comics
Retro Glam: Stars in Venice
Digital Alchemy: Dark and Macabre Art by Necro
Illustrator Repaints Cartoon Characters In Her Unique Style, And They Look Better Than Original
Finally, The 2022 Texts From My Dog Calendar Is Here!
The Best Signs From The 2018 Women’s March
Man Freezes Alongside Icy Painting in Surreal Self-Portrait Sculpture
GIF Of Thrones: An Artist Creates A Weekly GIF That Corresponds To Each Episode Of 'Game Of Thrones' Season 6
Funniest Raccoon Memes by Nocturnal Trash Posts
Selynn Lee Draws Cute Pets in Headscarves
Cthulhu Turkey: It’s a Turkey Stuffed With Octopus That People Actually Make
"Secretary Wanted.... Must be Flexible"
"Over Your Skin": Fascinating Art Project Sees Paint Flow Through Ridges In Human Skin, Creating River-Like Masterpieces
This Dreadful Emptiness: Dark And Depressive Illustrations By Aron Wiesenfeld
Disney Artist Inserts Beloved Characters Into Old, Traditional Japanese Photos
browser, internet, roshuk, series