20 Chinese Women Before And After Plastic Surgery 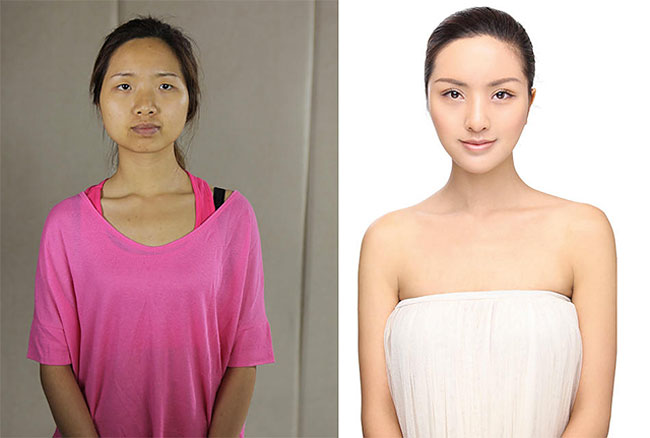 Most of the women sought out similar treatments that have become widely popular in Asia. This includes double eyelid surgery and rhinoplasty using a silicone implantto augment the bridge of the nose. Many of the women also underwent V-line surgery, a jawline contouring procedure popular in South Korea that gives the face a more narrow, heart-shaped appearance. Wide eyes, high nose bridges and a narrow faces with pointed chins are coveted features among many Asian women, and a number of Chinese women (and men) are flocking to South Korea in hopes to attain this look at the hands of skilled surgeons.

Pictured above is a 26-year-old woman named Liu Yisong, a dance teacher from Chengdu. The image on the left shows Liu before plastic surgery, while the one on the right shows her face post-operation. Liu disliked her eye shape, her flat nose, her round face shape and narrow forehead. She underwent a double eyelid operation, V-line surgery, nose reconstruction surgery and had collagen injections as well as a skin rejuvenation treatment. 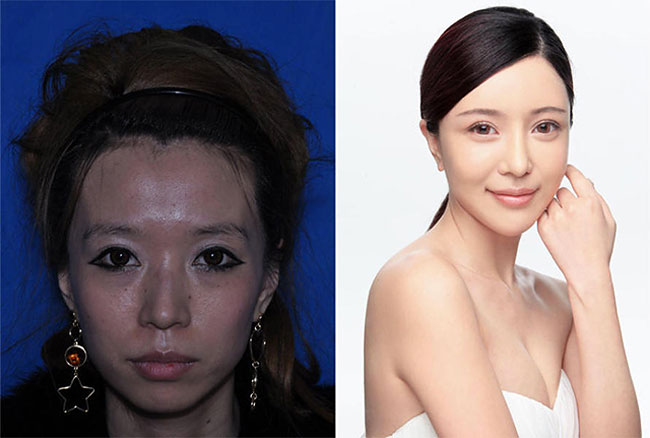 Zhang Cher is a 27-year-old Chongqing woman and aspiring singer. Zhang sought out surgery to correct her eyelids, the “hump” in her nose, her sunken cheeks and her freckles. She had a nose job, cheek plumping injections and laser freckle removal. 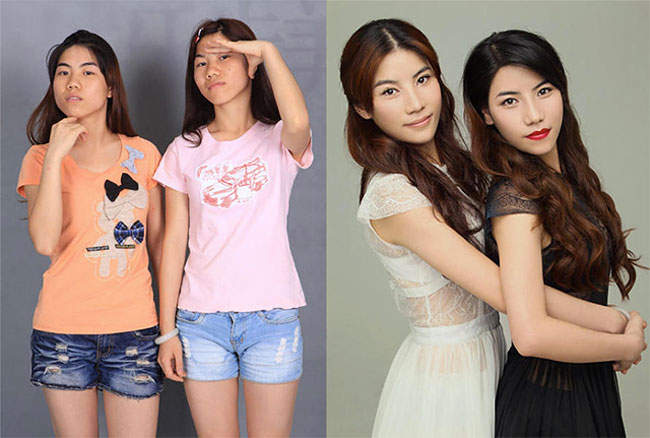 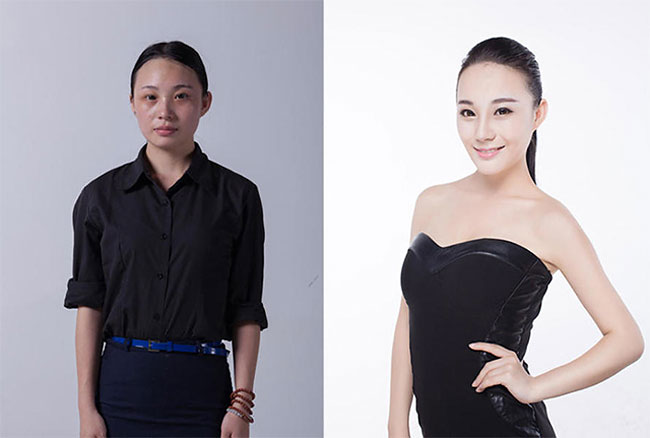 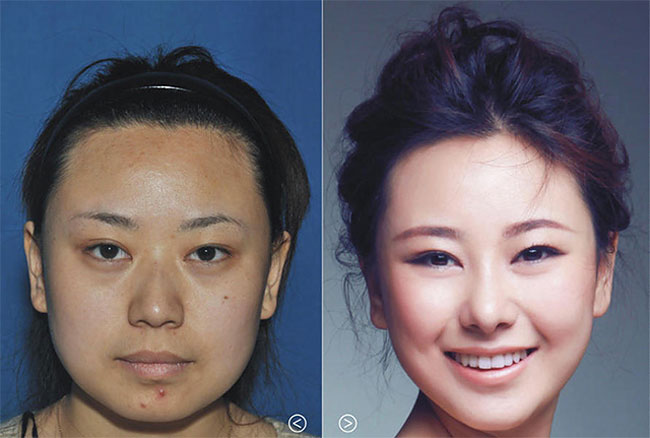 Pictured above is a 26-year-old Wuhan woman named Yumei Xie, who works as a jazz instructor. The picture on the right shows her after rhinoplasty, chin implant and facial liposuction procedures. She also had Botox injections and hair removal treatment on her forehead. 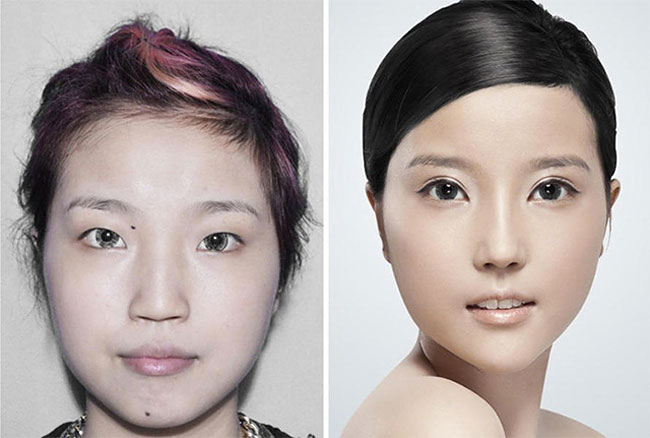 Huang Silan is a 20-year-old lounge singer from Wenzhou. Huang underwent double eyelid surgery, a nose job and laser treatment for the freckles on her face. She also got eyelash extensions. 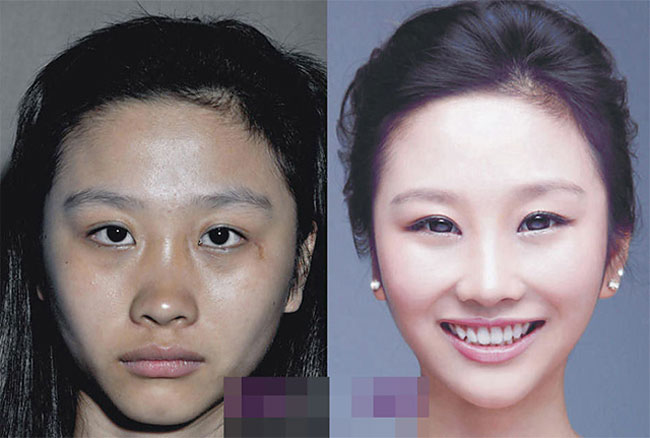 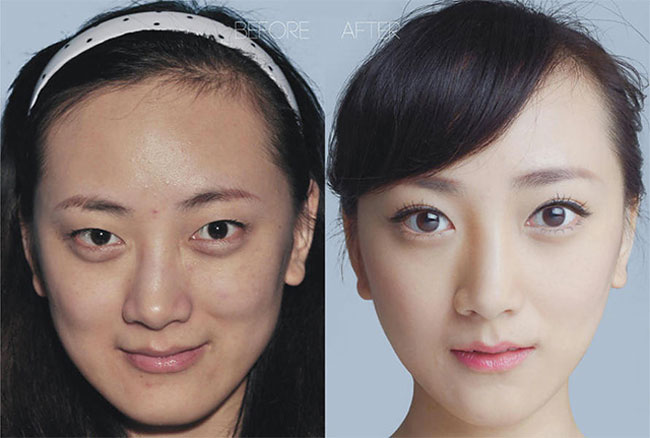 Liu Yi is a 25-year-old office manager for real estate sales in Guiyang. Liu had double eyelid surgery and had eyelash extensions put on her eyes. 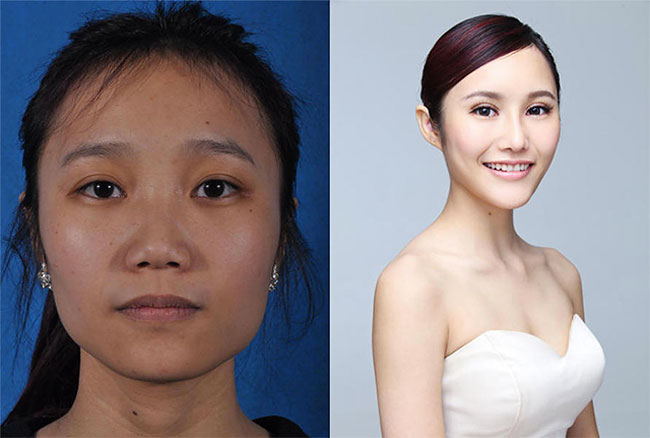 Yang Jiayi is a 21-year-old clerk from Beijing. Yang had her eye shape altered through surgery and received eyelash extensions. She also underwent the V-line surgery, had a chin implant put in, and underwent nose reconstruction surgery. Last, Yang got Botox injections in her forehead and cheeks, and underwent IPL skin treatment. 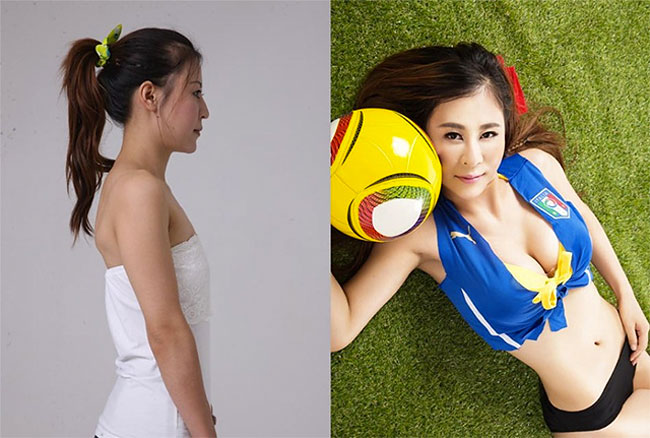 Lu Ying is a 30-year-old magazine editor from Guangzhou. She got breast implants, nose reconstruction surgery and also underwent a chin restoration operation. 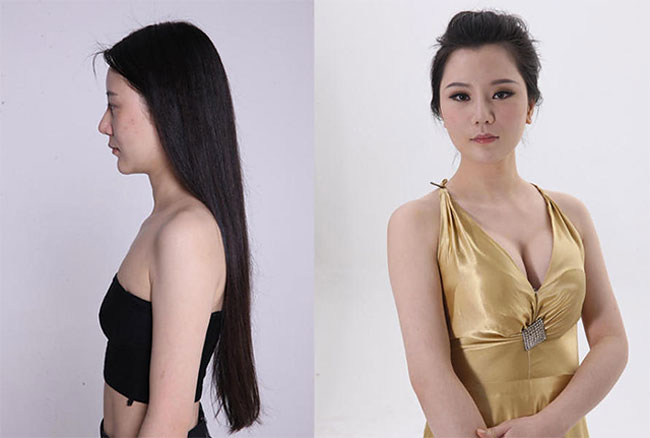 Pictured above is a 29-year-old Changsha woman and full-time mother called Julie. Due to her postpartum breast atrophy and weight gain, she underwent breast reconstruction sugary, waist and abdomen liposuction and had Artecoll, a permanent soft tissue filler, injected into her face as well as IPL skin treatment. 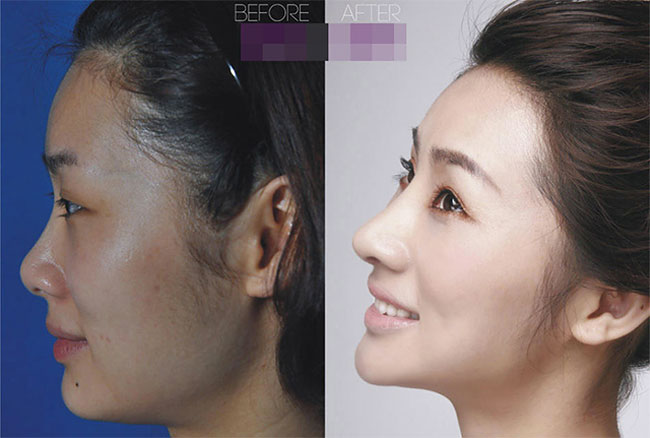 Gao Shanshan is a 28-year-old cosmetics agent from Kunming. She underwent a nose job, eyelid surgery, and had Botox face lift injections. 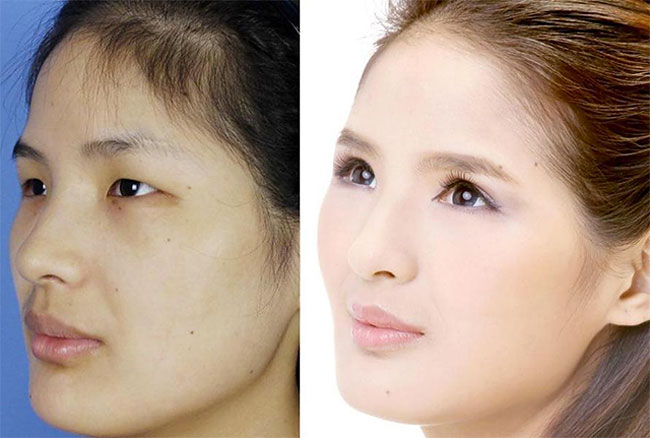 This Fuzhou woman surnamed Zhou is a 21-year-old student. She had double eyelid surgery and is pictured wearing colored contacts. 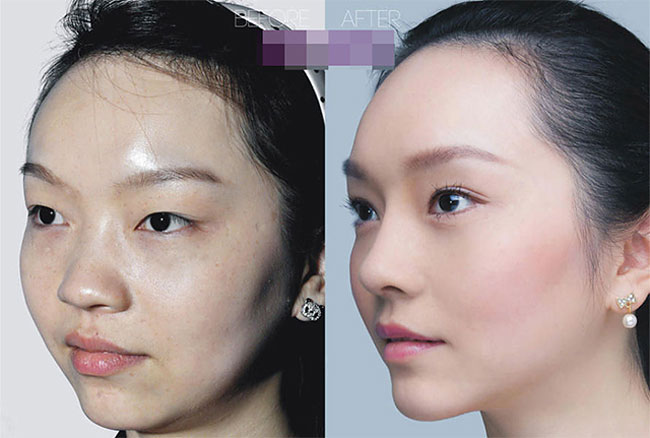 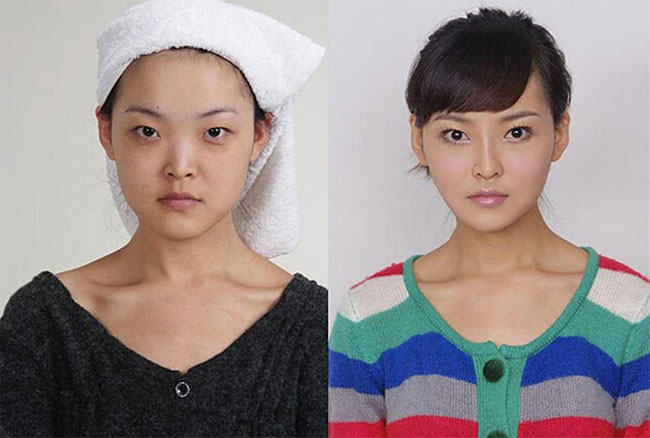 Wang Pingping is a 24-year-old tour guide from Hangzhou. She underwent surgery to change her pear-shaped face. She also had a nose job, eye reconstruction surgery and Botox injections. 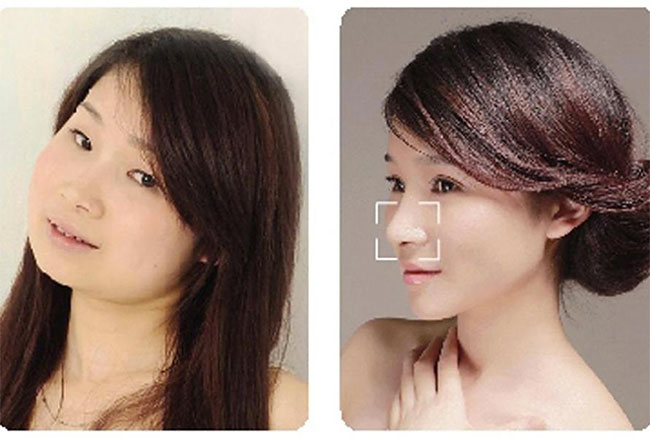 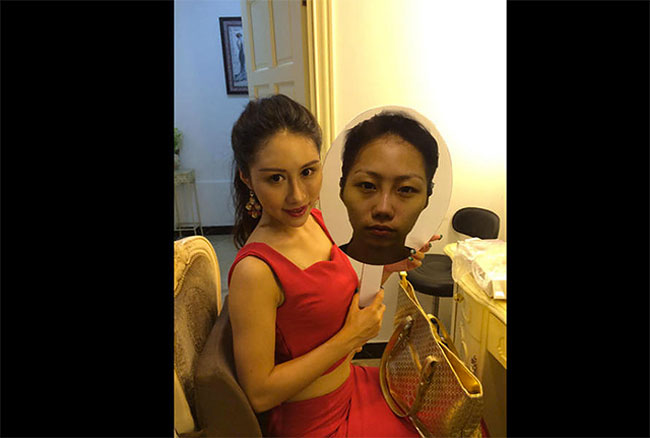 Lin is a 19-year-old model from Quanzhou who disliked her “swollen” upper eyelids, prominent cheekbones, nose and rough skin. She underwent double eyelid surgery, chin reconstruction and face contouring with fat transfers in her cheeks and forehead. She also received IPL skin treatment. 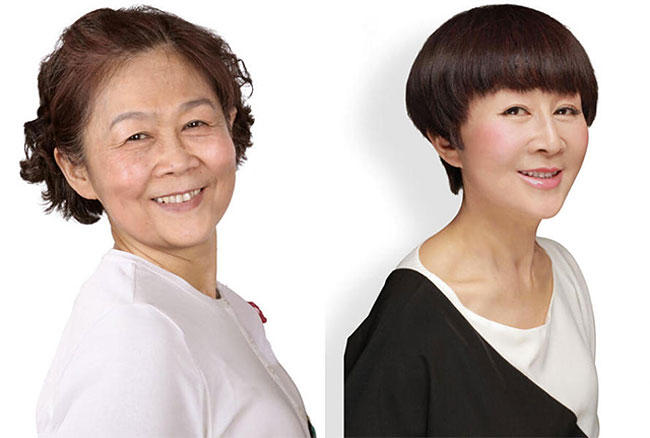 The above image shows an unidentified woman before and after cosmetic surgery. 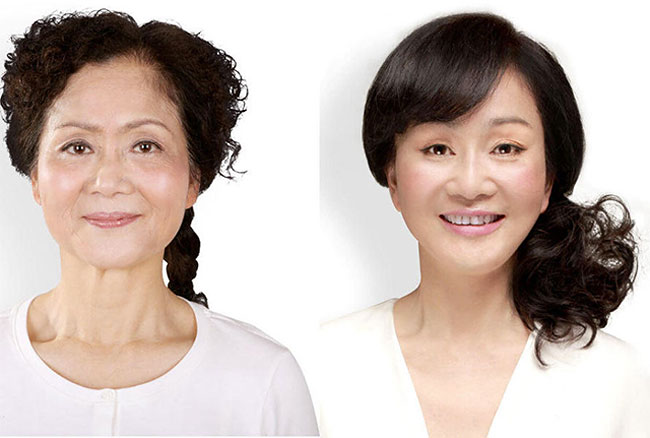 Last, this 56-year-old woman from Sichuan sought treatment for the sagging skin on her face and neck, wrinkles, eye aging and age spots. She also had work done on her nose.