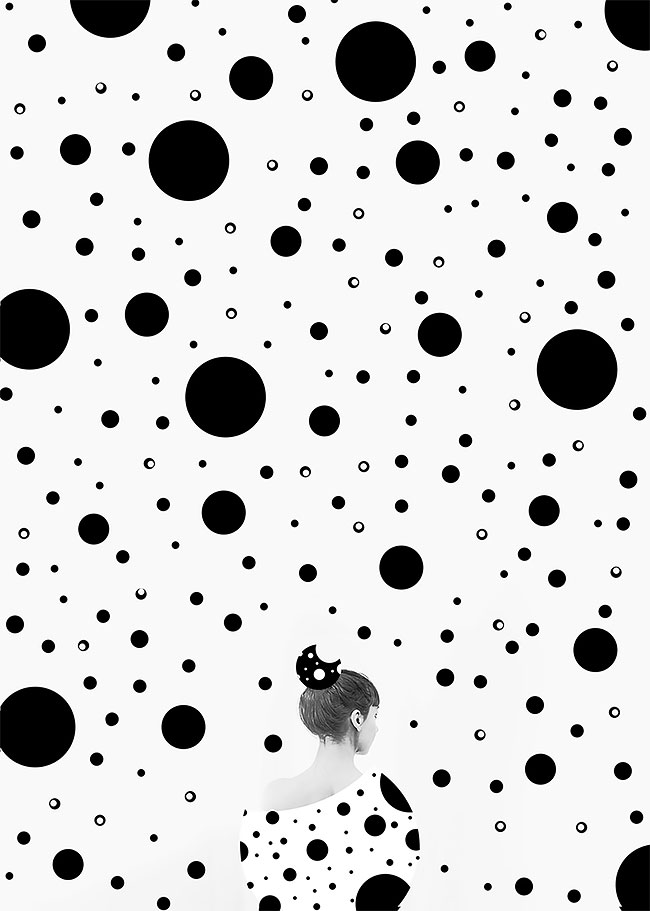 Known for its surreal and dreamlike vision, Erika Zolli’s photography combines the compositional force of abstraction with the emotional power of magical realism, leading those who look to a very particular and completely new aesthetic.

In “Geometric Variants” project, the photographer plays on the geometric relationship between man and space. If in the previous work, “Surreal Arabesque”, she had shown the extravagance of the imagery through a strong color saturation, in this new project, however, we come back to pure minimalism, already visible from the sole choice of black and white.

The relationship between subject and space in “Geometric Variants” has a strong visual impact, accentuated by the scenario of repeated monochrome shapes that create a geometrically psychic atmosphere. In this series of images the space is represented by multiple geometric shapes that represent the “variants”, and here the subject tunes to a certain area in the variation sector.

“The whole project is inspired by the theory of variants. It shows how the energy of man’s thoughts ends up in a field of space around it, called the space of variants, giving rise to the material realization of the variant itself. In “Geometric Variants” are represented: space, intended as a background made up of repeated geometric shapes, the subject and the creation of the variant date, represented by the union between the subject and his choice of how and where to position himself in relation to space,” she says. 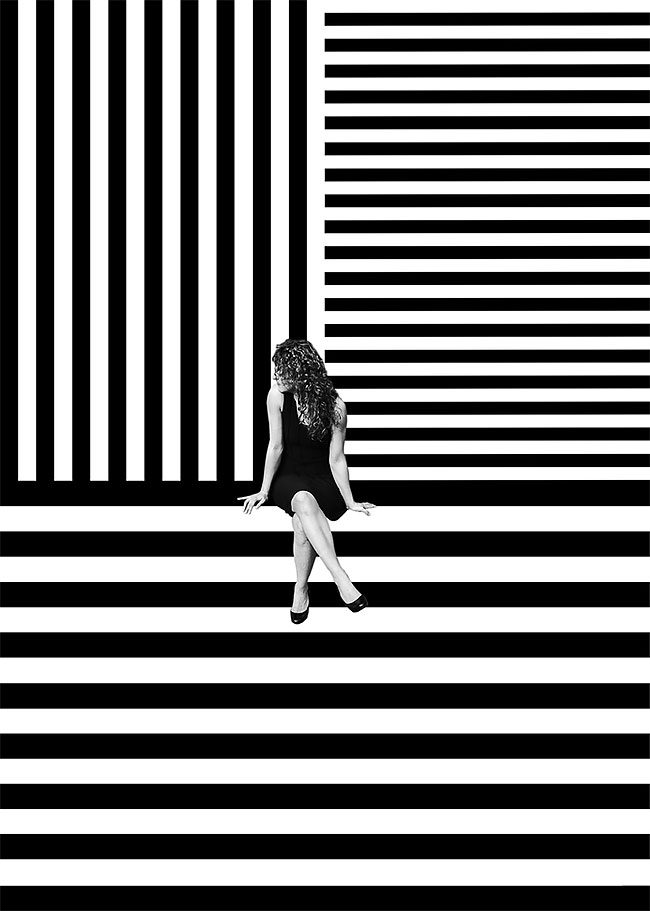 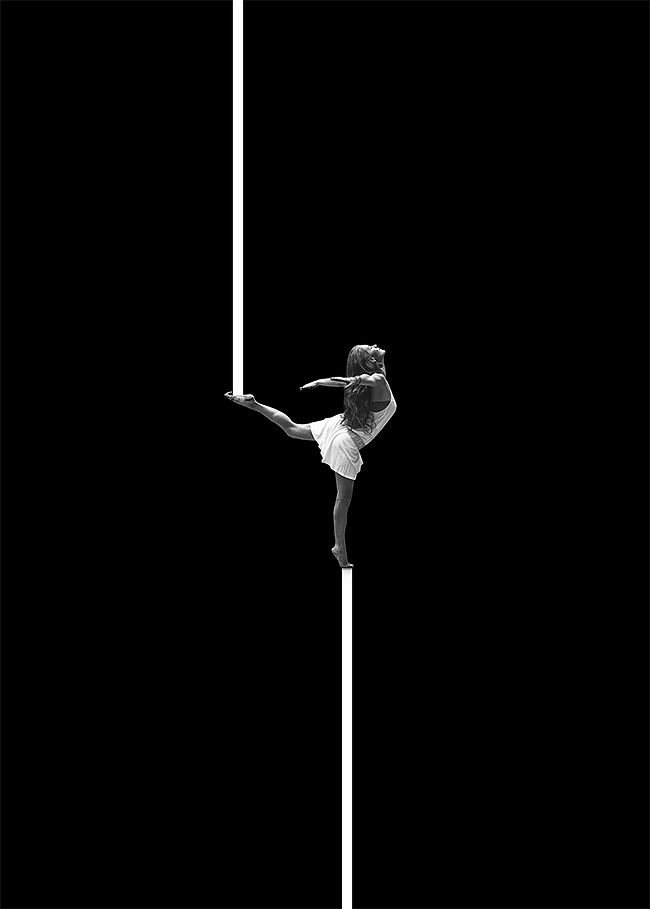 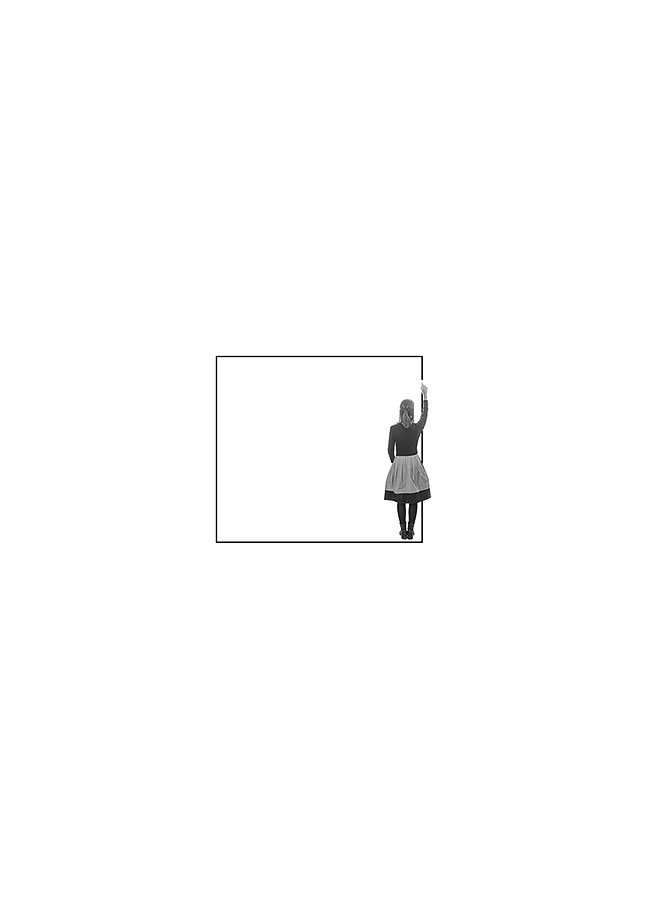 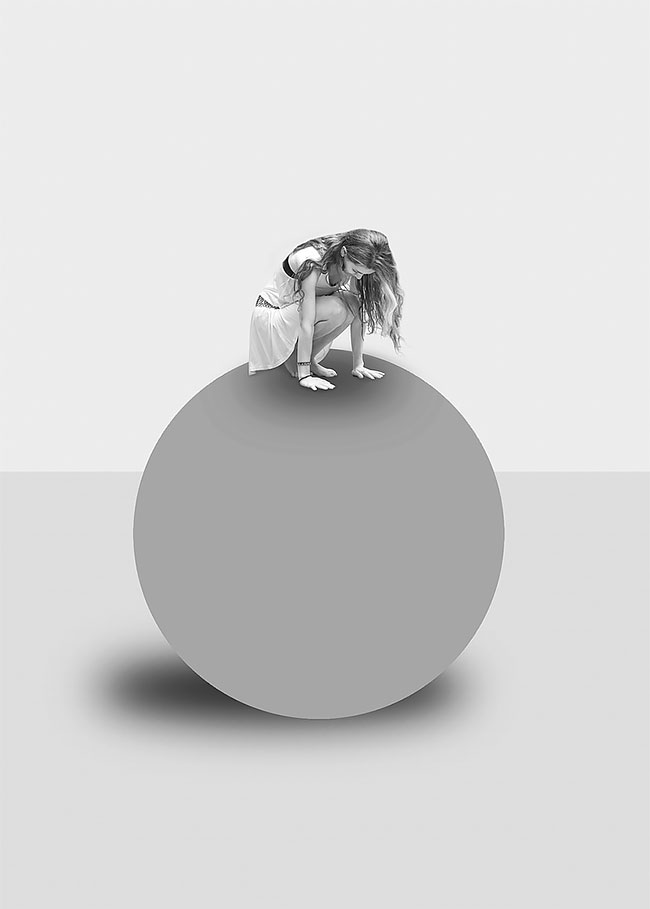 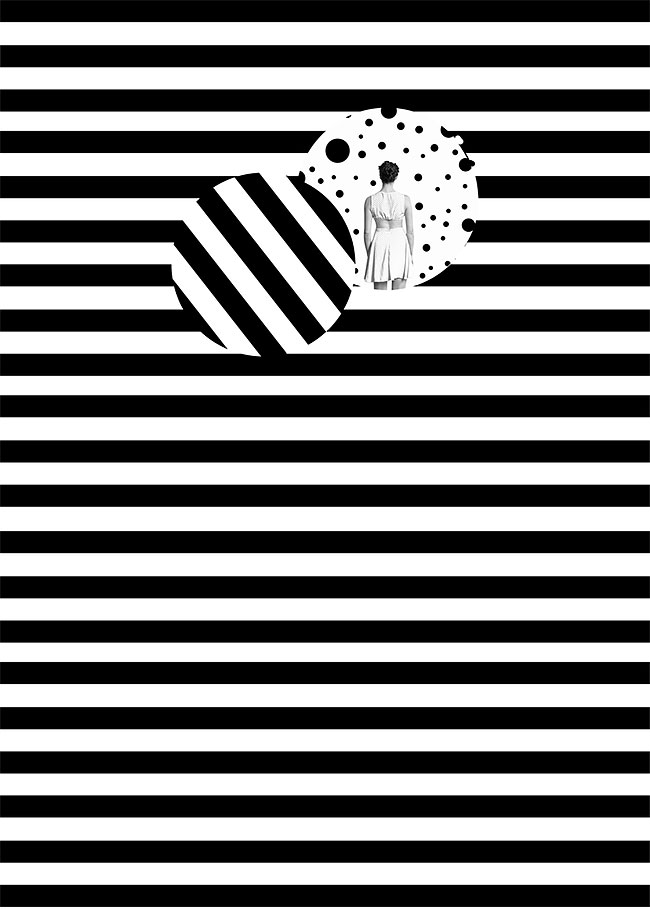 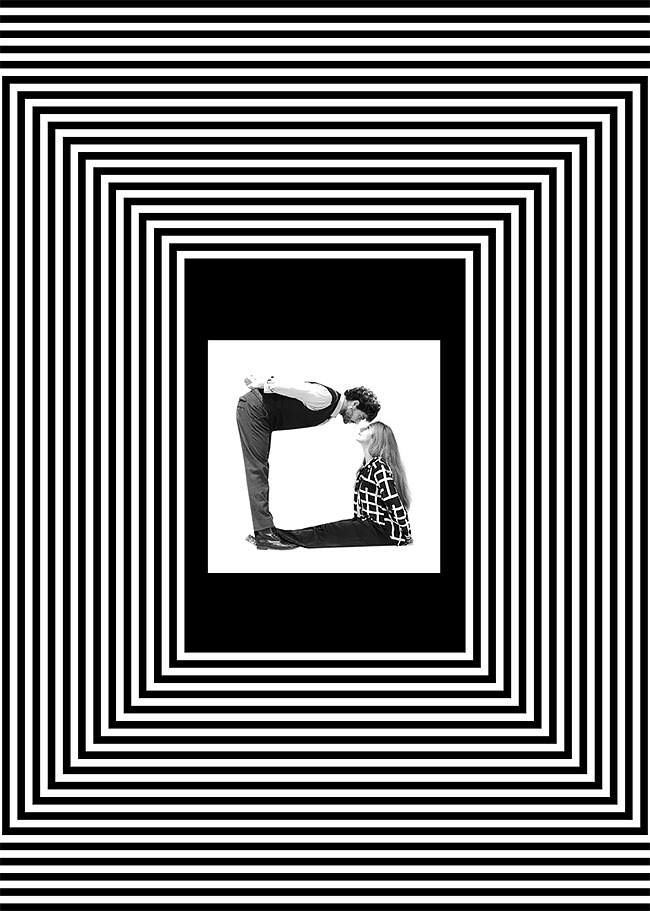 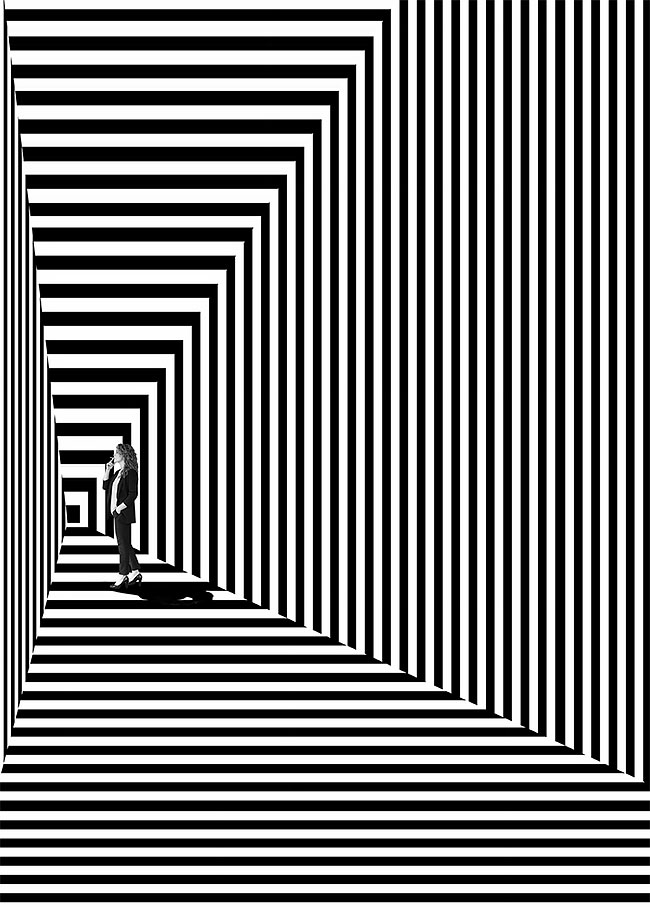 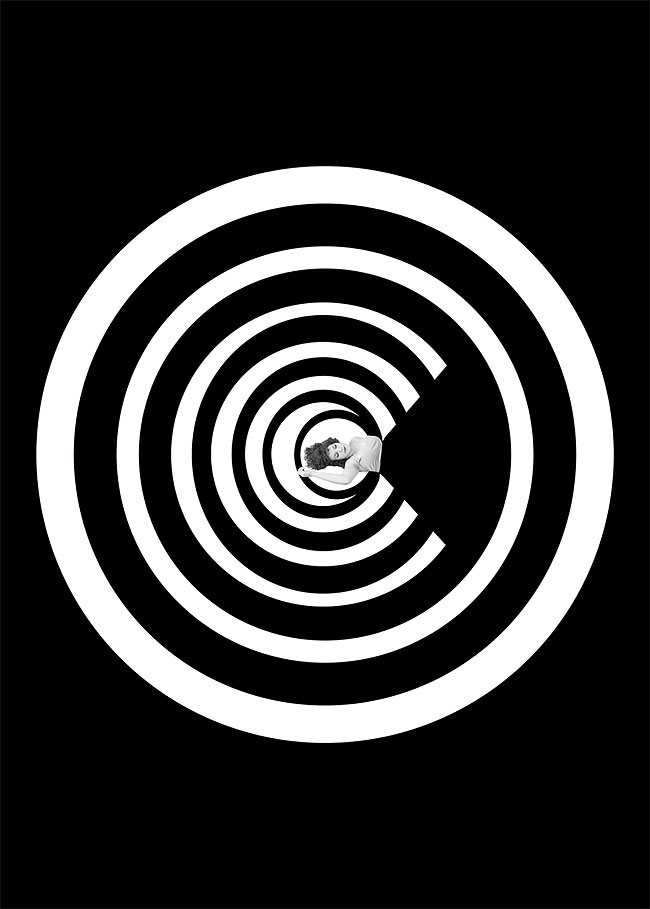 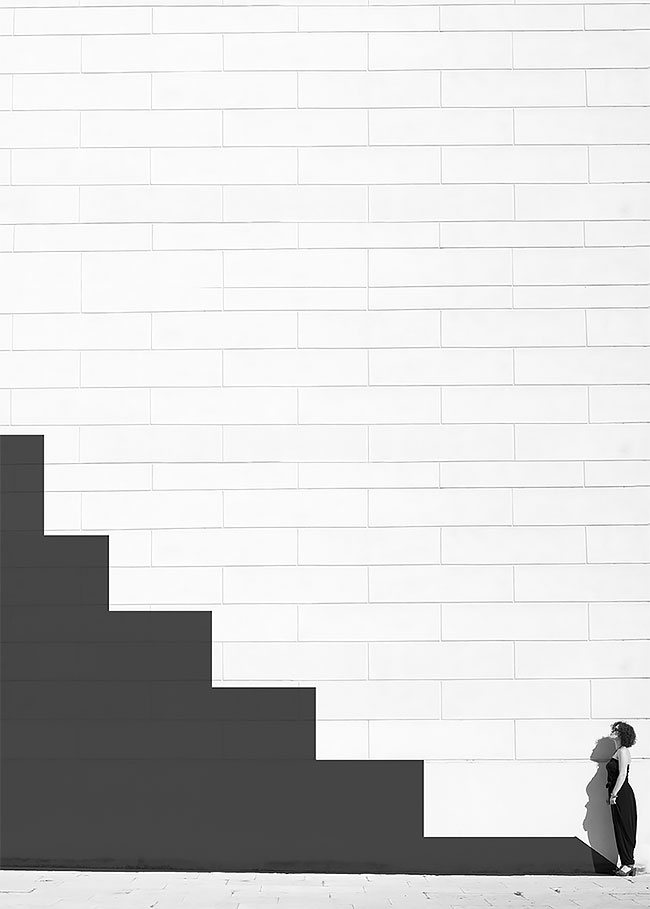 There’s An Online Community That Makes Fun Of People Trying To Sell Mirrors
Luxury and Decay: Atmospheric Abandoned Ruins in Photographs by Thomas Jorion
15 Babies Who Are Already Really Into Star Wars
Dressed In Love: A Photo Project Showing That Marriage Does Not Destroy Individuality, But Reinforces It
Rare Photographs of a Very Young Diego Maradona From the Late 1970s and Early 1980s
Winners of the National Geographic Photo Contest 2014
High Flying Fashions At Boston Hotel
Long Before Digitalization And Smartphones, Cool Snaps Show Ladies Posing With Their Cameras In The Past
Stunning Photos Of Haile Selassie I, The Emperor Of Ethiopia
Photographer’s Stunning Shots of Gorgeous Mountain Temple Look Straight out Of an Anime
"Peace, Love, Music And Mud": LIFE At Woodstock In 1969
Southwest: A Small World Project
Magical Urban And Natural Landscapes In Japan By Hiroki Furukawa
Japanese Action Figure Photographer Imagines Horror Icon “Cancelling” Friday The 13th
Photographer Martin Usborne Revisits A Childhood Fear Of Being Left Alone In A Car
NASA Captures Unique Elephant Face Image On Mars
Wildlife Photographer Of The Year 2018 Competition Winners Are Announced
Photographer Captured Stunning Pictures Of Milky Way In Finland’s Most Desolate Landmarks
Strange Encounters in the Eerie Nighttime Photography of Briscoe Park
Spanish Photographer Creates Mind-Bending Images Will Give You A Different Perspective Of The World
19th-Century People Have No Clue What To Do With 21st-Century Technology
"Autumn At The Lake": These Stunning Photos Will Remind You Of Wonderland
The Plastic Mosaic You Can See From Space: Spain's Greenhouse Complex
Guy And Pug Take Couply Photos Cuz Sometimes Your Dog’s Your Valentine
geometric, illusion, optical, photography, project, variants

Intimate Portraits Of New Mothers Capture The Beauty Of Postpartum Bodies
Wasteland: The Mad Max Festival That Makes Burning Man Look Lame
Breathtaking Winning Images of The 2021 Drone Photo Awards
Japan Cords
"After Taking LSD": Photographer Reimagines The World With His Hallucinogenic Photography
The Sundance Film Festival: 11 Days at the Center of the Indie World
Incredible Aerial Pics Show Thousands Of Burnt-Out Cars After Parking Lot Was Swallowed By Massive Fire
Photographer Found An Abandoned ‘Palace’ In The Desert, It’s Actually A Gameshow Set
Spectacular Winning Photos Of The British Wildlife Photography Awards 2018
Artist Used A.I. To See How Good It Would Be At Guessing What These Celebrities Looked Like As Teenagers
2007 ‒ 2023 by Design You Trust. Proudly hosted by WebHostingBuzz.
Privacy Policy · Terms of Service · Content Removal Policy ❤️ 🇺🇦