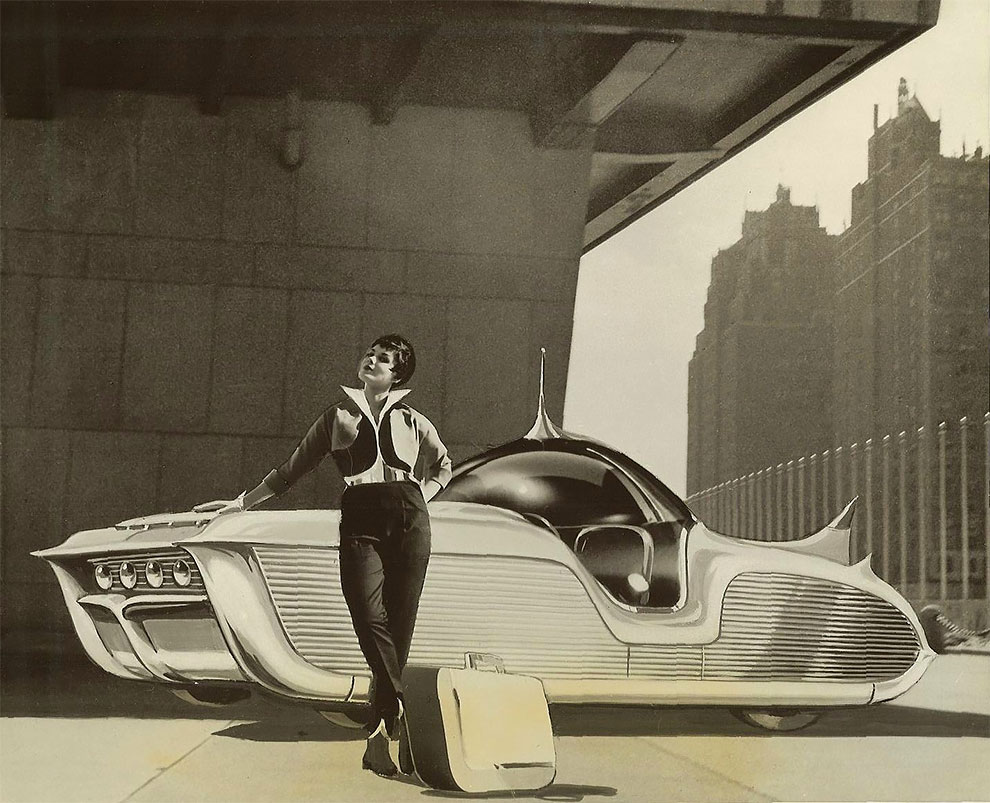 To the many people who will naturally ask “why build a ‘time and space car’ of such seemingly futuristic nature,” we present some exceedingly logical reasons for this highly exciting project. To qualify these reasons it is significant that while the prototype Astra-Gnome was constructed in a record breaking 4 months, its concept is the result of a continuous program of advanced automotive styling development by the Richard Arbib Company. 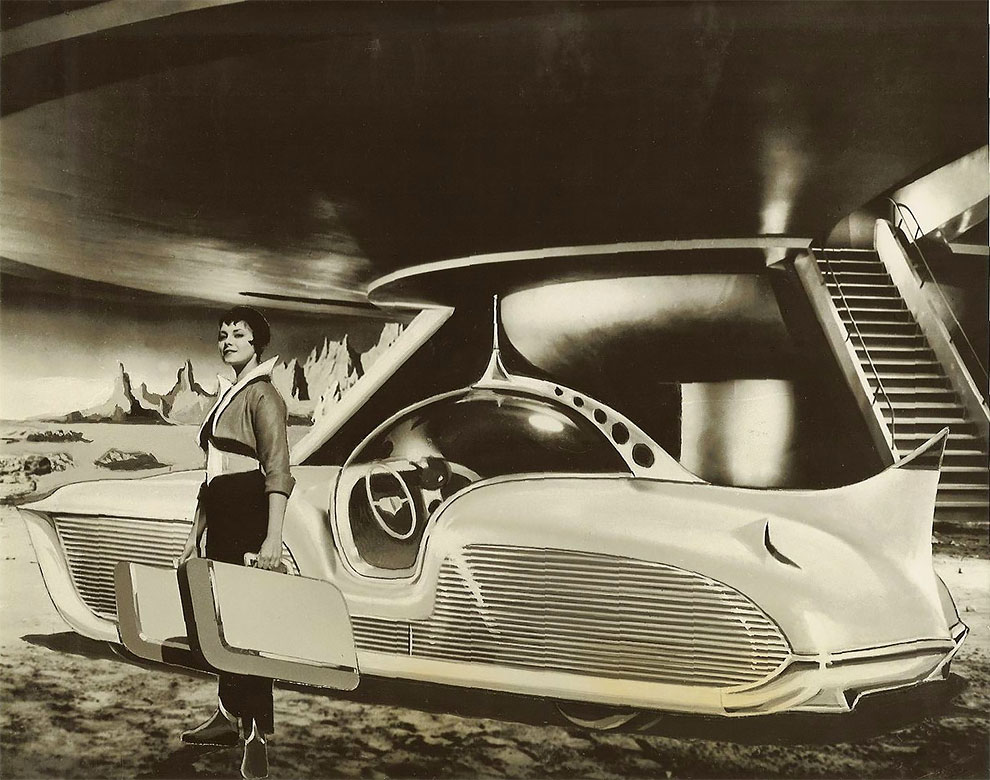 The “Time” element in the appearance of the Astra-Gnome in the year 1956 can be termed relative. Its features are timeless as far as basic automotive design improvements are concerned. Everyone has always wanted a smaller car that has plenty of luggage space! The Astra-Gnome provides just this through its unique “integra-luggage” system with distributes suitcases into otherwise wasted space areas.

Everyone has always wanted a full vision top without troubles of a convertible! The Gnome’s bubble canopy, plus air conditioning, gives this open feeling, but with no wind noise and “walk-in” entrance and exit ease. Everyone has always wanted futuristic styling, but in a practical form that is functional – not just different! The Gnome has an “out of this world” look, yet features interchangeable colored aluminum trim panels in place of gaudy paint schemes, functional big car bumpers in place of small car weaknesses, and admirably adapts to unit-body construction. 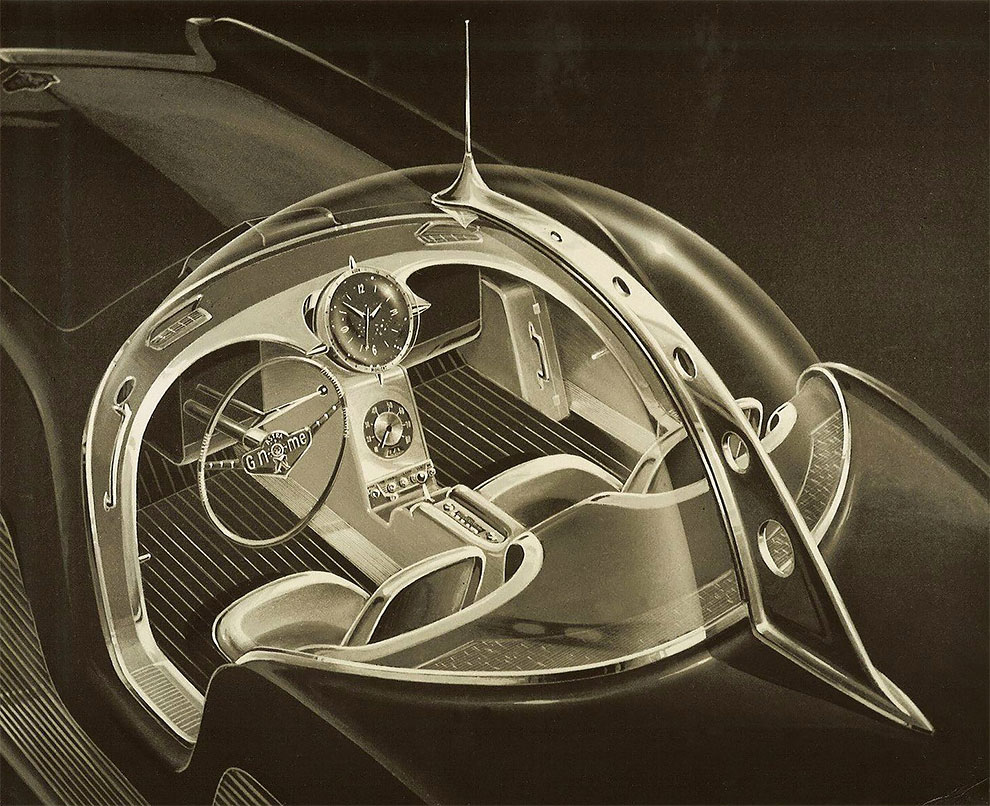 These, and a host of other features, are here and now in the Astra-Gnome, but it will only be a matter of time until in some form they appear in future production cars. These features are not concerned with high horsepower or competition car performance, because as product stylists we do not believe the primary task of the appearance designer is a mechanical one.

“We believe our job is to create new and exciting shapes, textures and colors in a functional car. In the Gnome a totally new driving sensation akin to flying has resulted from this kind of esthetic exploration. The “Space” element in the Astra-Gnome is almost self-explanatory, for the designer of the “personal” car is dealing with a space problem from the very beginning,” said Richard H. Arbib. 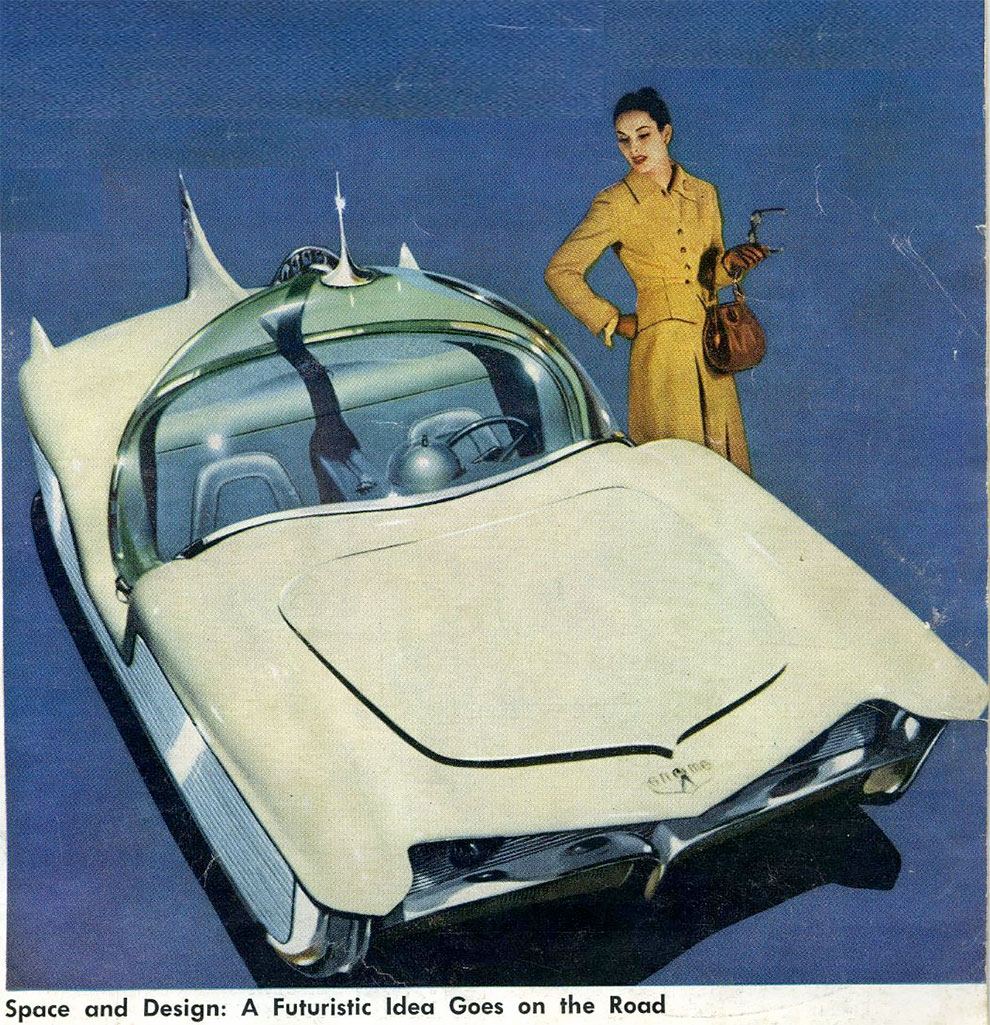 The 6 foot wide Gnome, because it is wider than most cars of its length (13.5 feet), gives abundant interior room and allows for a phenomenal amount of storage and luggage area. By careful workout, a production version of this car can carry no less than 6 pieces of matched integrated luggage, totaling as many cubic feet as found in the average full size sedan’s trunk compartment.

The proportions of the Astra-Gnome do not designate it as a “sports” car nor is its styling European in origin. It was deliberately styled to be appealing in a pert, futuristic manner – not to mimic big car slab-sided trends. It is sculptural and alive in its contours, borrowing heavily from jet aircraft, rocket and space ship forms, yet embodying much of the beautiful tailoring found in ancient steel armor. 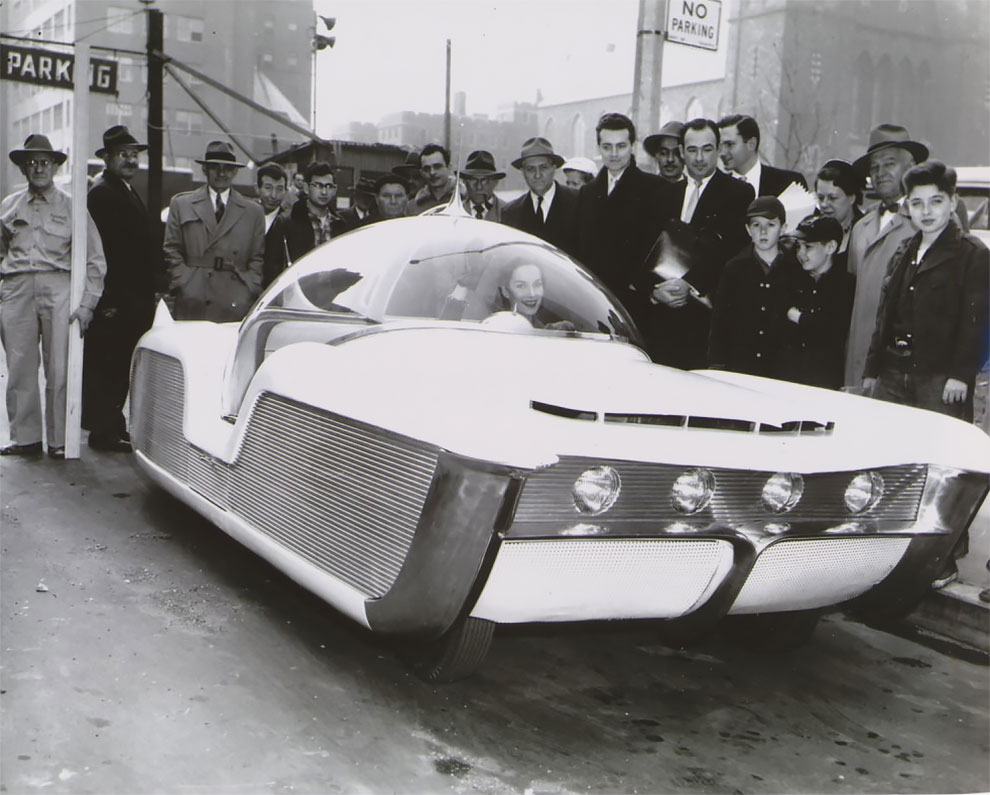 Contrary to most cars, the wheels and tires of the Gnome have been de-emphasized. This was done on purpose to achieve a floating special quality and to avoid the ungainly “over-wheeled” look of most small vehicles. Thus, the appearance of the Gnome subtly captures the intangible look of the future with shapes that can be found in astronomy and in all of the aspects of form found in nature around us.

This is the kind of advanced thinking that went into the creation of the Astra-Gnome and that prompted the title “Time and Space Car.” We believe this brief explanation will help you ao appreciate our aims in this fascinating automotive project. 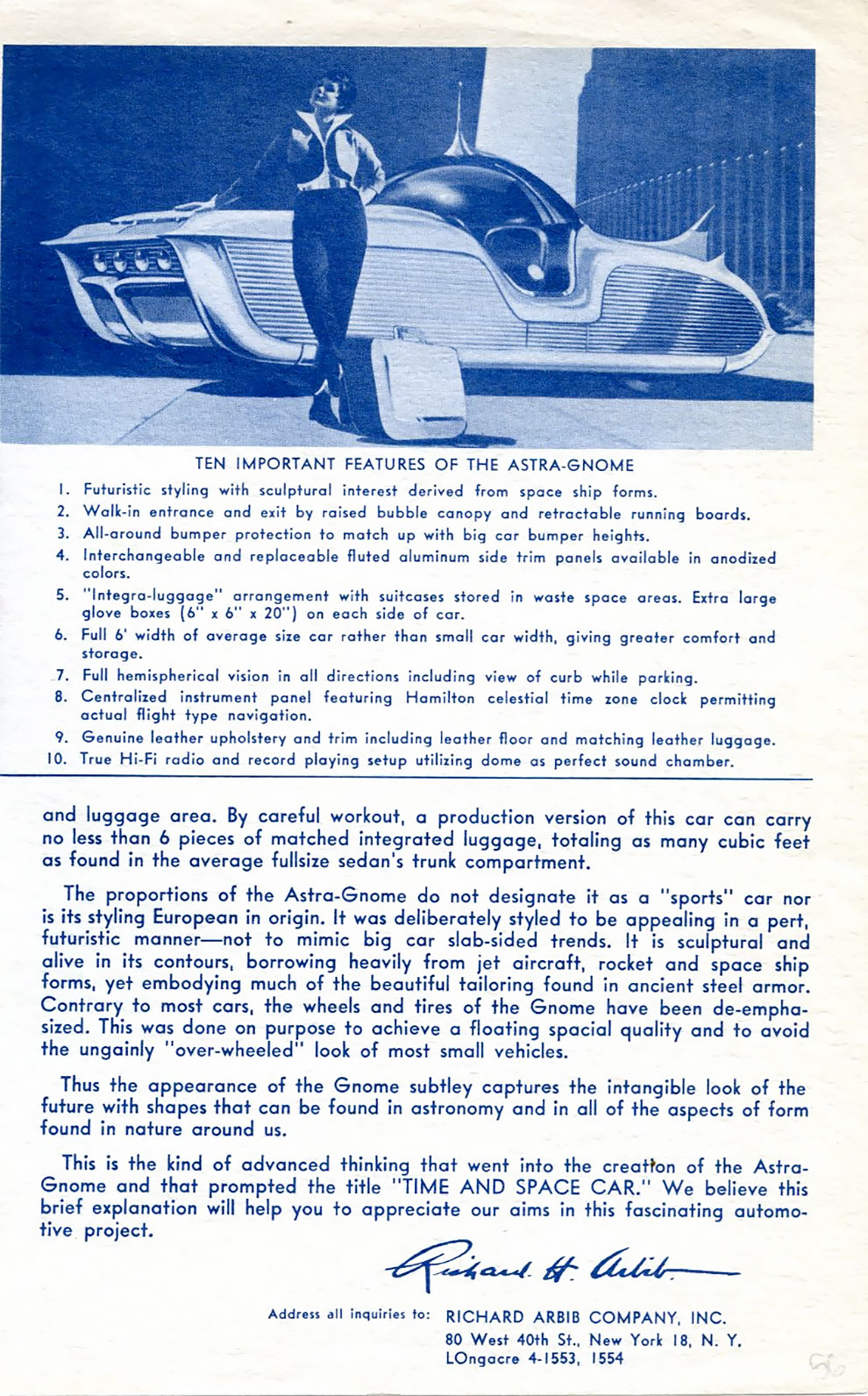 Art of Science 2011 Gallery
Soviet Jet Train Able To Reach 160MPH Was Supposed To Change The Future
Hot Ninja - Multifunctional Network Device For Autonomous Activity In The City Environment
The Light Phone
Inside China's Trash Park Where Bentleys And Mercedes Worths Millions Are Abandoned By Their Rich Owners
PORTAL: An Interactive Bridge to Unity Connects Two Countries
Everyday Things That Look Totally Different Under A Microscope
1970 Lancia Stratos Zero: A Crazy Concept from The Wedge Era
UVMask: Real-Time UV-C Filtration & Purification Face Mask That Filters Dust, Organisms, And Allergens As You Breathe
"What If Orthodox Priests Became Cosmonauts?": Artist Unites Two Russian Pillars In His Paintings
Robot Restaurant in Eastern China
This Starry LED Scarf Will Light Up The Universe Around You
This House Was Designed With A Wall Space For Projecting Movies On It
Just A Vespa Jet Ski
Computerspielemuseum in Berlin
Beautiful Photos of Fiat X1/9, One of the First Truly Affordable Mid-Engine Sports Cars
Finally, LEGO Announces Its Own Foldable Device , An Antidote To Folding Phone Mania
"Goodbye, Diesel Train": This Brutal Soviet Bad Boy Has Been Destroyed In Estonia
Bulgarian Stray Cat Get Bionic Legs
Jetman Performs at EAA AirVenture
"Weird Faces": An Algorithm Based Project That Creates An Infinite Collection Of Fun Looking Sketched Faces
$4 600 000 For Your Very Own Floating Island
NASA Captures New Magnificent Images Of Galaxies
Famous Paintings And Historical Figures Recreated Using Artificial Intelligence
astra, forgotten, gnome, space