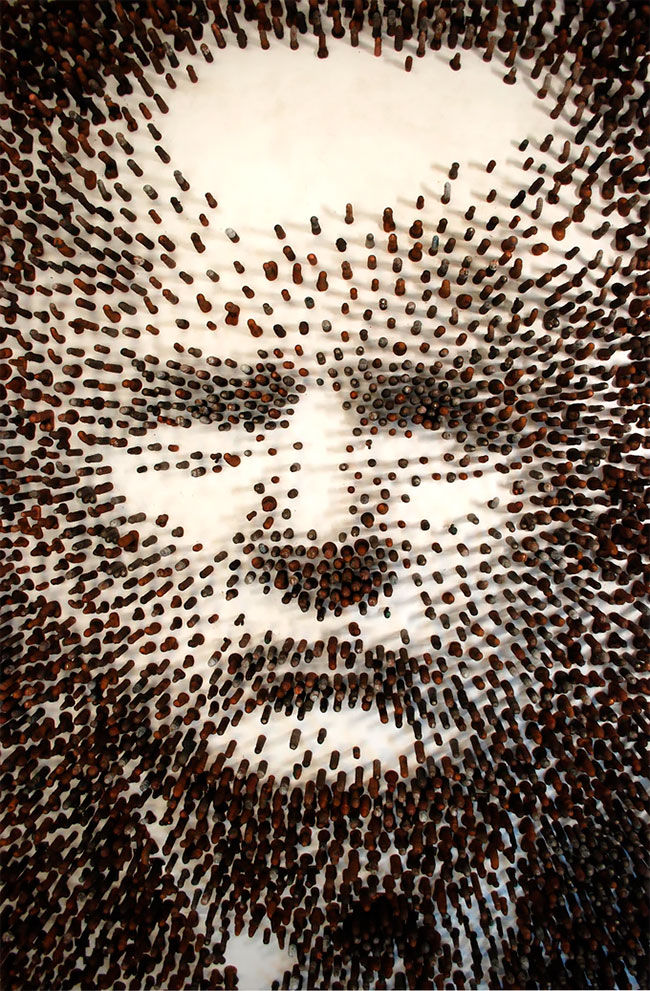 The portrait, currently constructed in a studio, measures 12 by 20 feet. Manka launched a Kickstarter fundraiser to raise money for the project, ultimately aiming to create a touring installation that would stop by Washington D.C., Wisconsin and Dallas ahead of the November presidential election, using the hashtag #DildoDon. 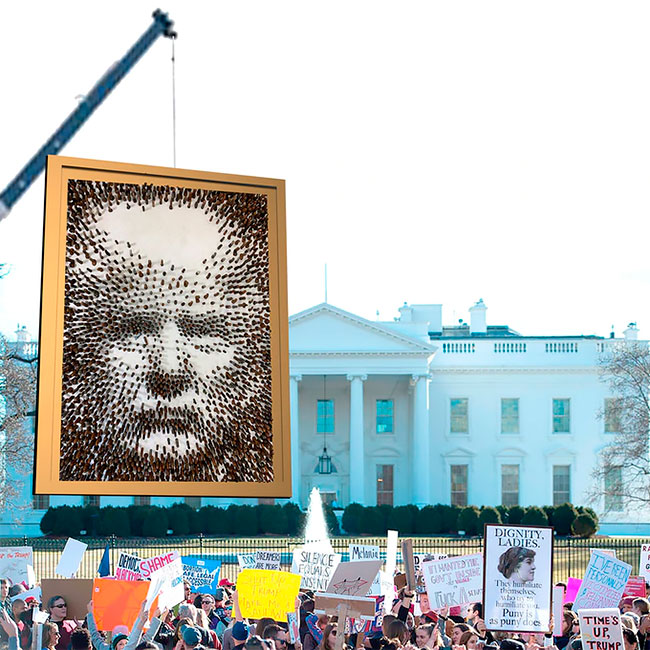 Manka stated in his Kickstarter page that, at one point, he acquired more than 3,000 pounds of metal sex toys that slated to be melted down. 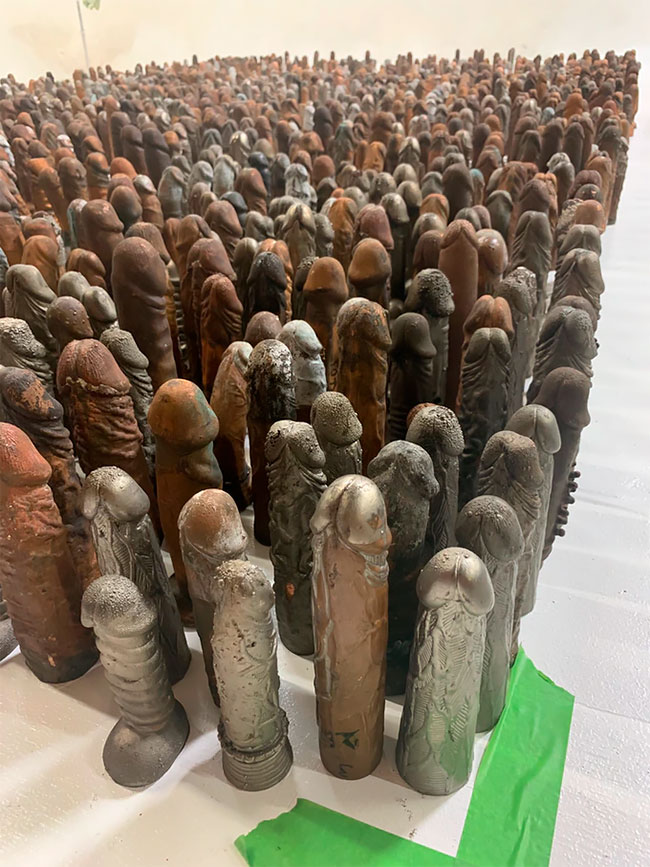 “Most of them are super funny, some are really strange. Others are awfully filthy from sitting on the industrial shelves of a … manufacturer for 40 odd years,” Manka stated in his Kickstarter description. “Anyhow, the question I have been faced with over the past three years is what to do with these wonderful artifacts?”

Originally, Manka planned to create a zen garden with the sex toys, he said. Then, he tried selling them on Etsy and was suspended from the website. 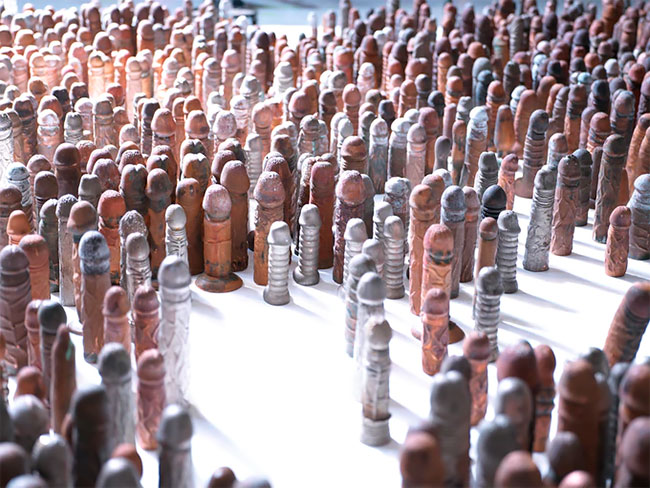 “Then an idea struck, a huge sculpture of Trump. I must admit, I was slow to see the possibilities, mostly not wanting to think more about the metal (sex toys) and then to have to think about Trump. No thank you,” he wrote in the Kickstarter description. “But the more I circled and considered what could be created, the deeper I was committed to creating it.” 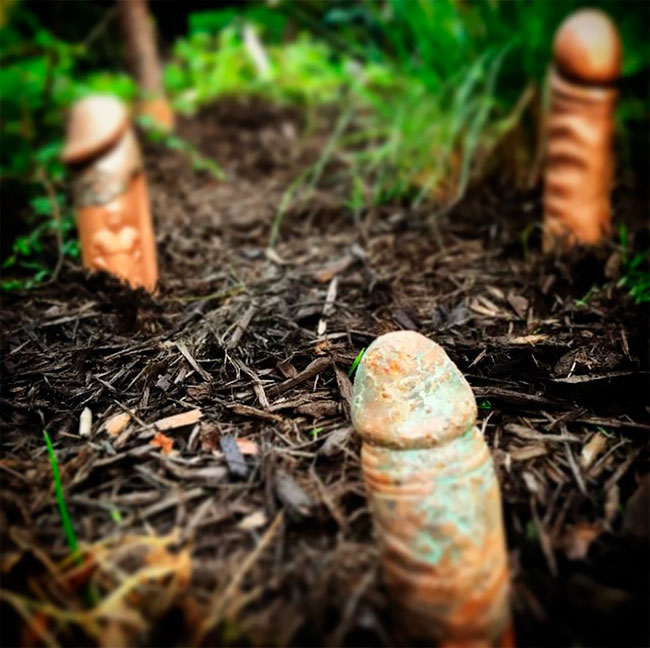 Manka’s other works are decidedly less strange, and easily spotted around Cleveland. His public light sculptures are featured around RTA stops and sidewalks around the city.

Seven Trolls And A Magical Tower Built From Recycled Materials Make Up A Fairy Tale In A Belgian Forest
Estonian Rapper Tommy Cash Has Collaborated with Adidas on Some Really Long Shoes
Artists Recreate Van Gogh’s Iconic Bedroom And Put It For Rent On Airbnb
An Artist Has Made This Badass Raven Costume Entirely By Hand
Artist Creates Surreal Translucent Glass Sculptures Inspired By Cell Division
End Embarrassment: The Playful and Fun Toilet Paper Rolls from Japan
An Artist Has Created A Giant Mosaic Made From Recycled Plastic Bottles Depicting Vincent Van Gogh’s Famous Painting 'The Starry Night'
Russian Craftsman Makes Stunning Candles Inspired By Iconic Sneakers
An Official Ozzy Osbourne Bat Plushie With Removable Head
"Gothic Times": Artist Spends 14 Months Creating The Most Incredible Ghost Pirate Ship Sculpture
Love With A Taste: Taipei-Based Designer Created A New Packaging System For Conventional Condoms
Forensic Artist Brilliantly Reconstructs A Face From An Empty Skull-Shaped Bottle Of Crystal Head Vodka
Stress: TMJ Disorder Visualized As A Bronze And Concrete Sculpture
Artist Imagines How History’s Most Famous Painters Might Decorate Their Homes Based On The Color Pallettes Of Their Paintings
These Embroidered Landscapes by Katrin Vates are Beautiful
In Elementary School, These Eerie Dioramas Would've Won You a Trip to The Child Psychiatrist
Two Guys Built This 400,000-Brick LEGO Volkswagen Van In Six Weeks
Someone Just Made An Epic ‘Game Of Thrones’ Lamp
This Unique Lamp Design Includes A Rope That Can Be Bent Or Twisted Into Sifferent Shapes
These Ugly Couches That Everybody’s Grandparents Had In Their Living Room!
I Don't Give a Fuck Reminder Coin & No Fucks Coins: Badass Coins to Remind Yourself to Keep Calm and Not Give a Fuck
This Dadbag Was Made For People Who Want A Dad Bod Without Eating Junk Food
City Of Shenzhen Honors Medical Heroes Who Have Returned Home From The Front Line
Afro Beauty Brought To Life In Photographer Luke Nugent’s Lavish Hair Portraiture
Japanese Squishy Shiba Inu Marshmallows Are The Cutest Way To Level Up Your Hot Chocolate
90+ Kids Built This Intergalactic Space Station In The Woods Of New Hampshire
Floating Vases by ooDesign
Surreal Photos Of Japanese Playground Equipment At Night By Kito Fujio
Artist Carves Tiny Birds Under A Microscope To Make The Outside World Disappear
Ib Kamara: The Cross-Cultural Stylist Reassessing Masculinity
dildo, elections, giant, portrait, trump