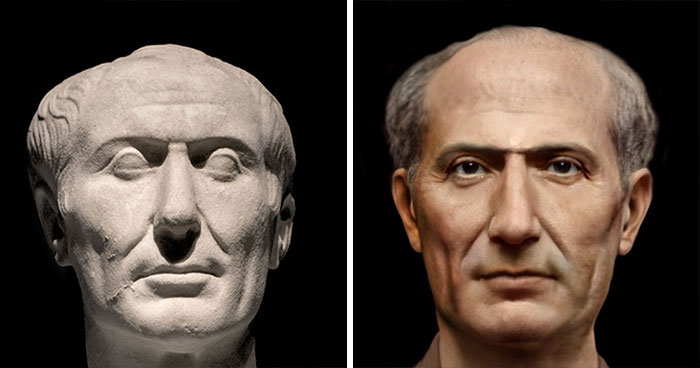 For many of us, history used to be a bit of a boring topic in school. But, over the years, it has become clear that it wasn’t the topic itself, but the way it was presented—it just didn’t appeal to the younger audience.

Now, if someone was to show the 10-year-old me pictures of reconstructed faces of famous people from antiquity, which were restored using the miracle of modern technology, then I would have been much more interested in studying the past!

Speaking of which, Alessandro Tomasi is doing that exact thing—reconstructing the faces of famous people from ancient times, and so far, he’s done quite a few of them! 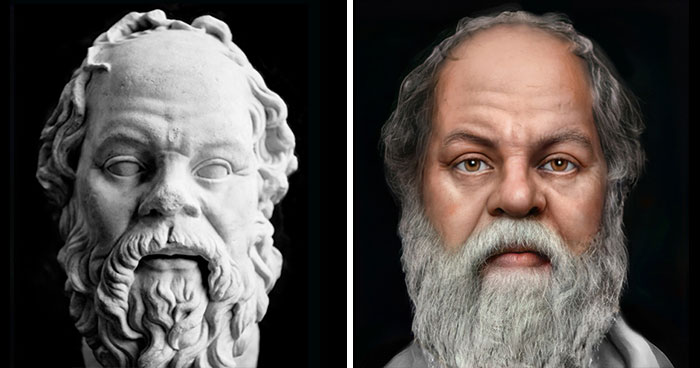 So, Alessandro Tomasi is a 20-year-old Italian-Lebanese artist and student from Florence, Italy who has recently started reconstructing the faces of historical figures of the distant past.

By reconstructing, we mean that he has practically taken a bust of said historical figure and did some technical wizardry to make them look like real people.

He has so far done a number of historical personas, like Plato, Aristotle, Socrates, Homer, Cleopatra, Hannibal Barca, Emperor Elegabalus, Septimus Severus, Herodotus, and many others. 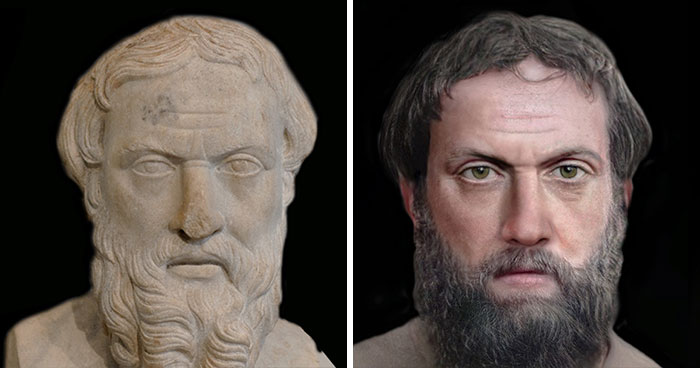 When asked how he came up with the idea to start reconstructing faces of historical figures, he explained that he has always been interested in history—Greco-Roman and Phoenician history, in particular—and that he launched this little facial reconstruction project after seeing others do it online:

“I decided to start doing these reconstructions after coming across other reconstructions on the internet, which have obviously been done by people with absolutely no knowledge about genetics or history. Other than the fact that it is very interesting for me to bring busts to life, the main reason I started making them is basically a response to the other historically inaccurate ones I saw.” 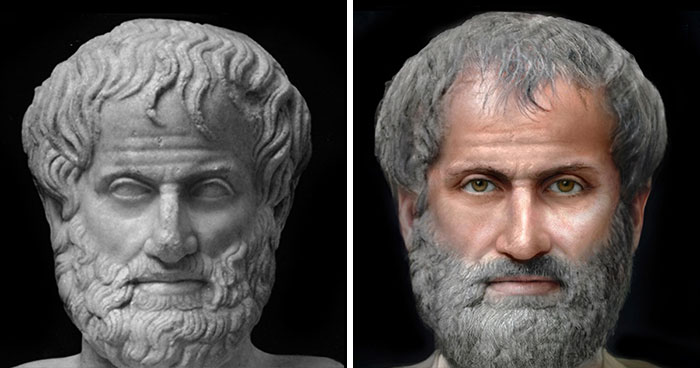 Tomasi explained that he uses two bits of software for the face reconstruction: Photoshop and Artbreeder. Photoshop is (probably) self-explanatory, but Artbreeder is an online tool that makes use of machine learning to control and manipulate portraits. In Tomasi’s case, Artbreeder is used to create the base, while the rest of it (the majority) is work with Photoshop.

“Now, the most important part, the way I choose the color of the skin, eye color, etc. is by reading population genetics studies and trying my best to relate them to the genealogy of the historical figure I am reconstructing the face of,” elaborated Tomasi.

He continued: “I also refer to physical descriptions of the figures I am working on, written by ancient historians like Suetonius and Pliny the Elder. However, it is important to keep in mind that many of the descriptions in these ancient texts aren’t necessarily reliable as many were not written contemporarily to the persons they were describing.”

“Also, we have to remember that most statues did not appear as we see them now, as they were originally colored and as a result, some traces of the colors and pigmentations can still be traced, which also helps as a reference, but in most cases, it is not possible to use this method as a reference.” 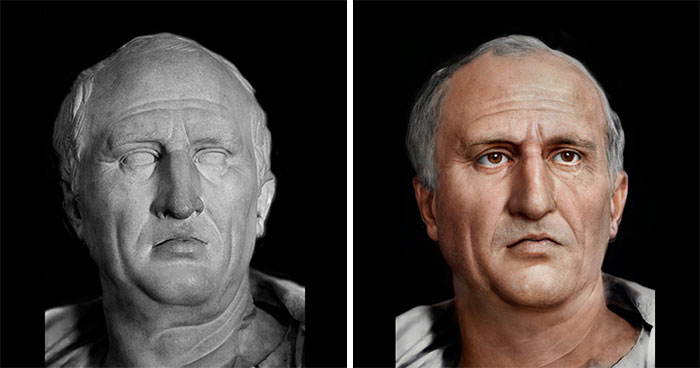 As is common with art, facial reconstruction doesn’t come easy. And it’s not just the meticulous work regarding the study of all the genealogies and genetics, as explained Tomasi:

“I would say the biggest challenge is trying to find the right bust to work from. I always try to find busts made during the lifetime of the person I am reconstructing the face of when I can, to be as accurate as possible.”

So far, Hannibal Barca is Tomasi’s favorite project as it was extremely interesting for him to bring such a fascinating historical figure back to life, though he also said that he really likes how Cicero turned out too. 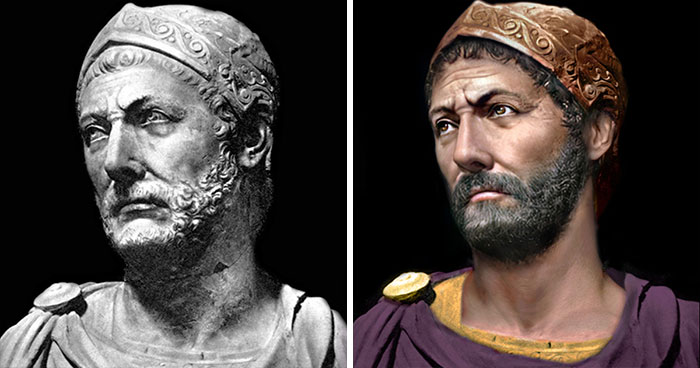 King Of Macedon Alexander The Great 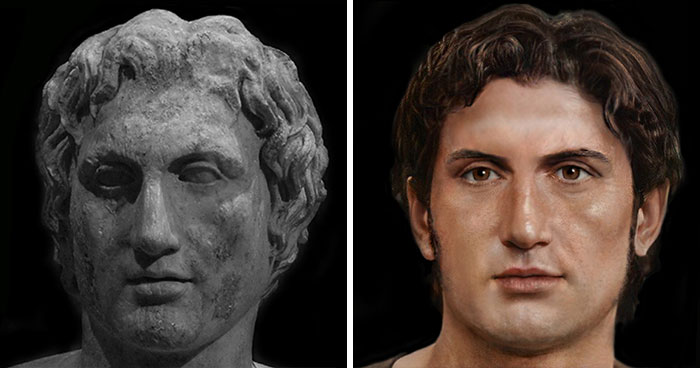 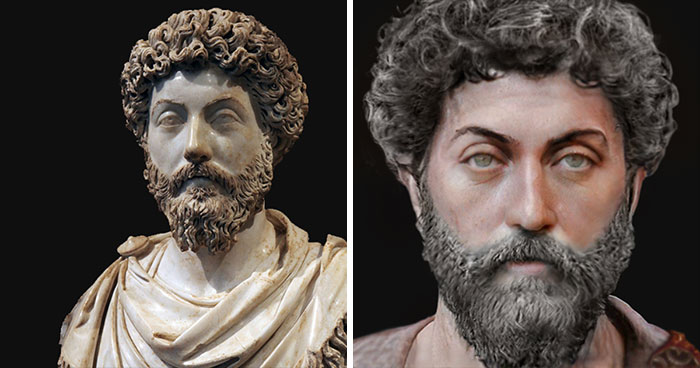 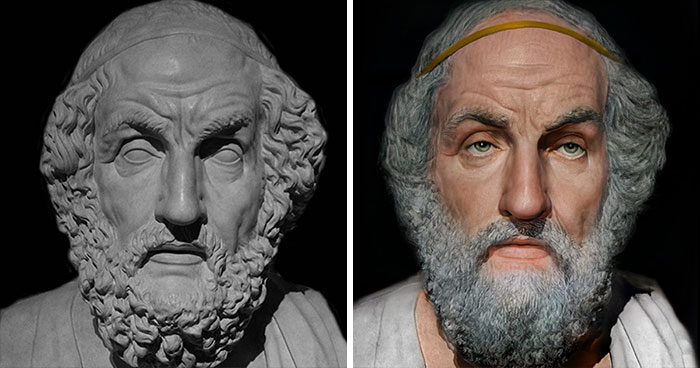 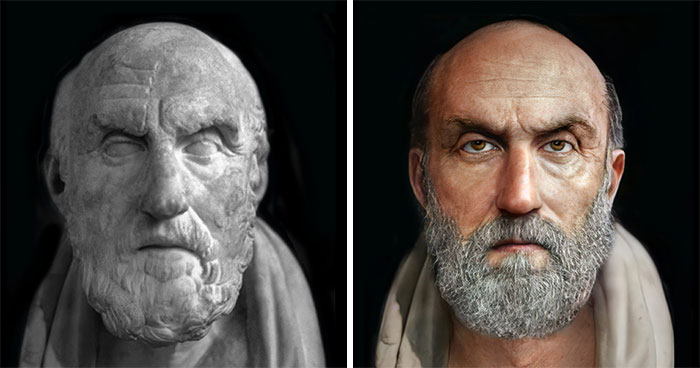 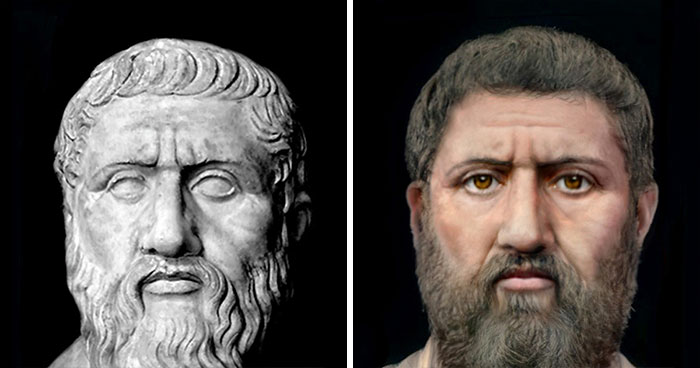 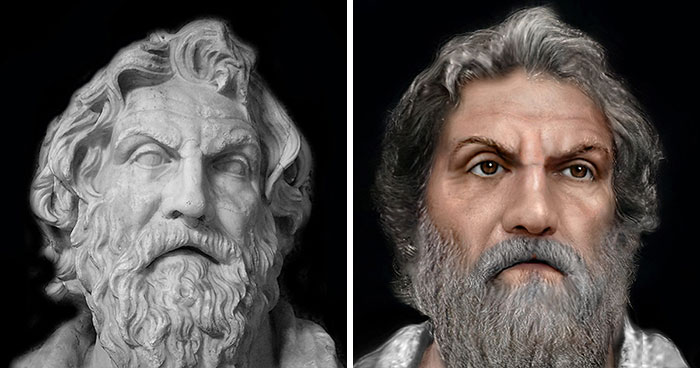 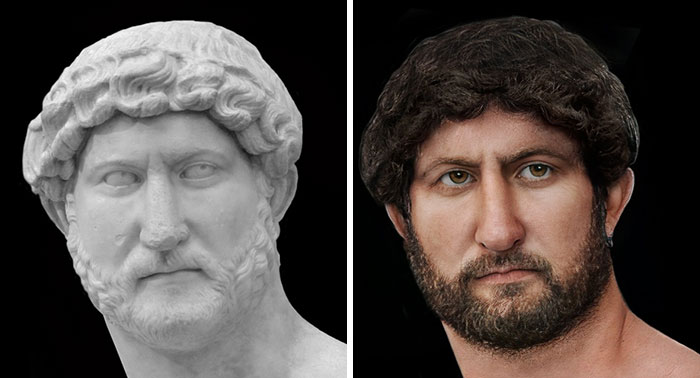 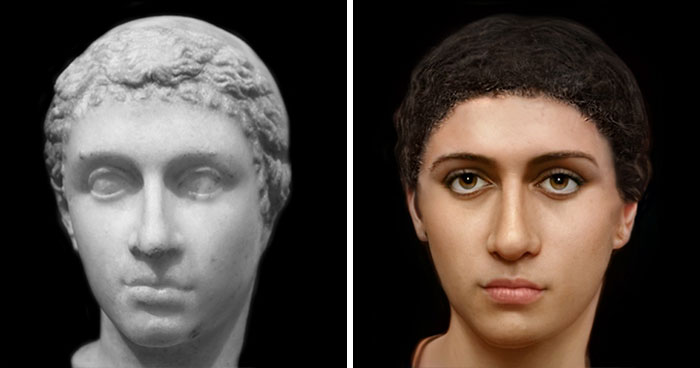 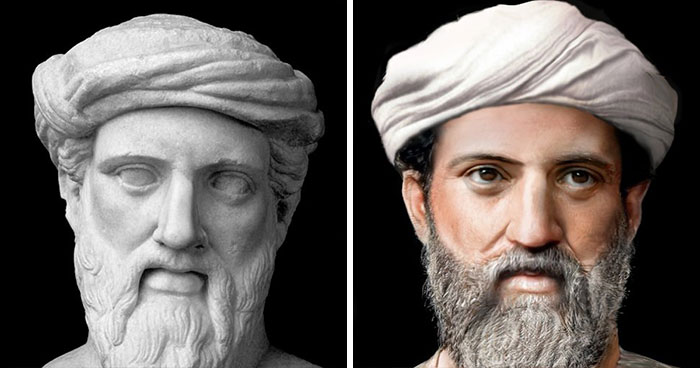 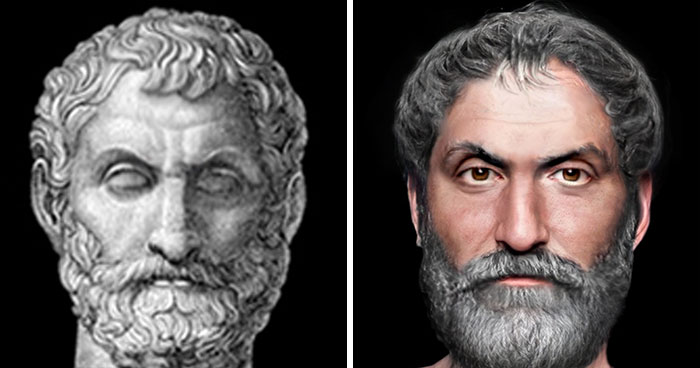 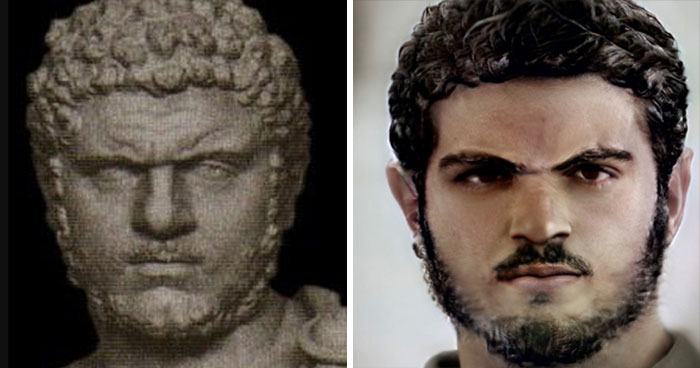 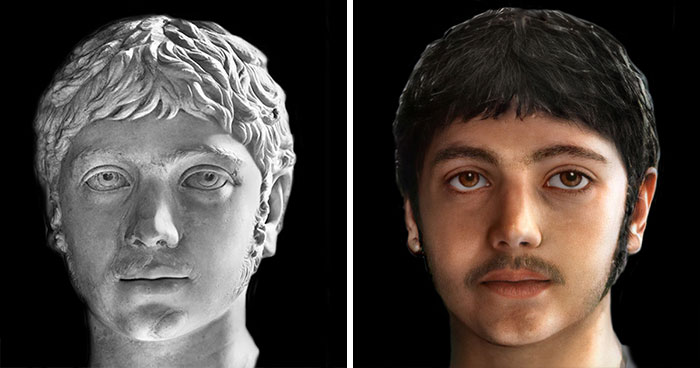 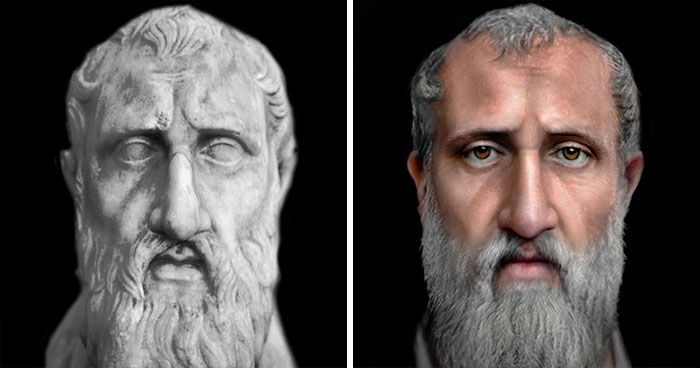 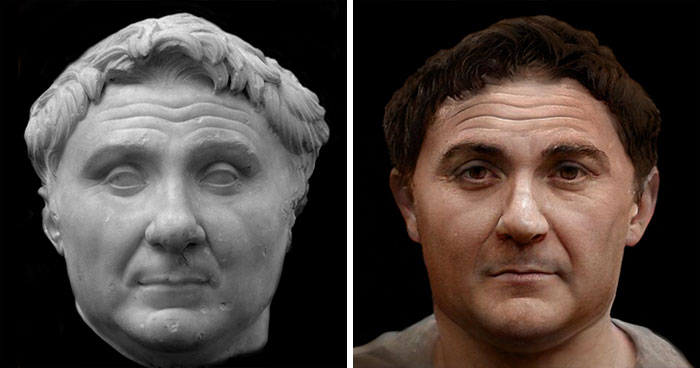 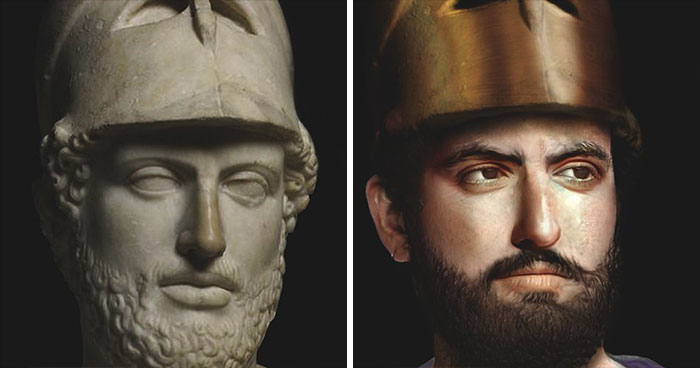 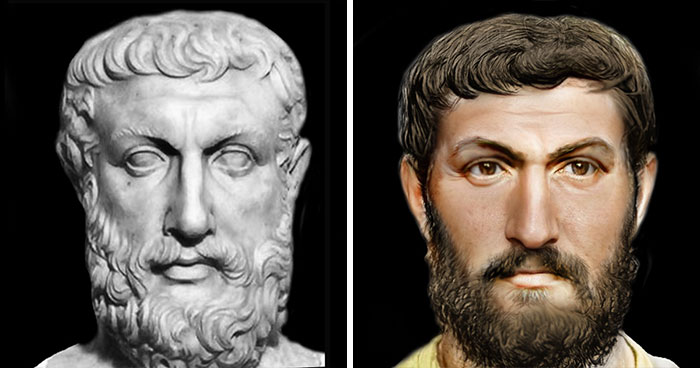 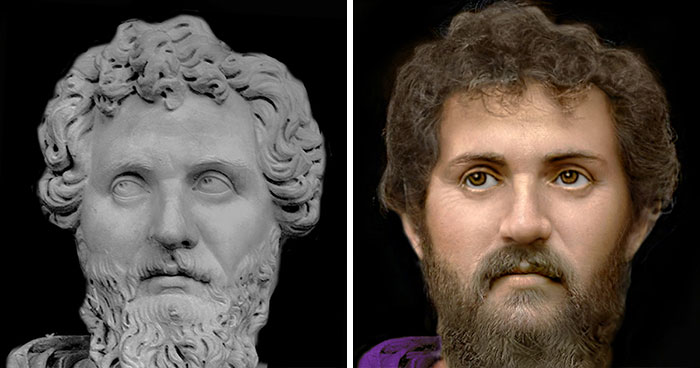 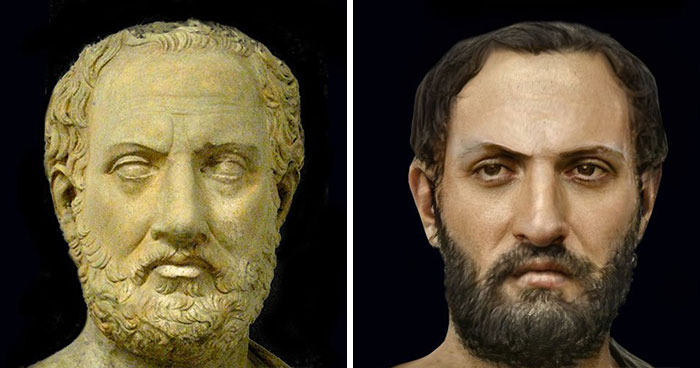 How To Look Smart In Zoom Meetings, an Illustrated Guide by Sarah Cooper
Dreamlike Images That Will Inspire Your Surrealist Soul
Famous Brands Get A Logo Makeover By A Canadian Artist To Better Reflect Their Brand Philosophy
Hilariously Unapologetic Comics By Domien Delforge
The Art of Dreams: Illustrations by Jeremy Wilson
Portraying Black Power Through Afrofuturism
Artist Uses His Feet To Create Gigantic ‘Game Of Thrones’ Snow Art In French Alps
Socially Awkward Situations And Funny Random Cartoons by RandoWis
This Russian Guy Creates Dark Surrealist Art And It Will Give You Nightmares
Here’s How People From The Past Imagined The Future
We Are Fucking Angry
20 Winners Of The Greatest Photoshop Battles Ever
25 Redesigns Of Famous Logos And Some Of Them Are Better Than The Original
30 Vintage Ads That Would Be Banned Today
Amazing Snapchat Art by Dasha Battelle
Vintage Pie Ads
Artist Replaces Famous Parisian Monuments with Iconic Pop Culture Characters
NYC Taxi Drivers Calendar
McDonald's Unveils the Simplest Ads It's Ever Made
"Far Beyond The Immobile Point": A Journey Through The Dismal World With Michal Karcz
Soft and Steel: The Heroic and Fantasy Paintings of Julie Bell
Life is Adventure by Marek Farkas
Simple Tips To Make Your Relationship Last 25 Years And Longer
Kids Make The Best Protest Signs
ancient, faces, famous, history, people, restore