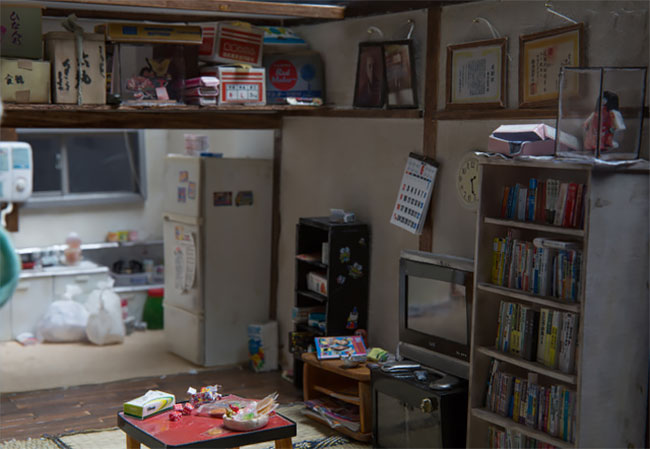 Twenty six-year old Miyu Kojima works for a company that cleans up after kodokushi (孤独死) or lonely deaths: a Japanese phenomenon of people dying alone and remaining undiscovered for a long period of time. The instances first began to be reported around 2000, and are thought to be a product of increased social isolation coupled with a greying population.

Part art therapy and part public service campaign, Kojima spends a large portion of her free time recreating detailed miniature replicas of the rooms she has cleaned. A word of caution: although recreated without the corpses, some of the replicas can be quite disturbing.

“I mainly clean up these flats, apartments, houses where lonely death had happened and also organise their mementos,” says Miyu. On average, those whose homes she cleans, she says, may have been lying undiscovered for a month or two; the longest, eight months. Sometimes, they clean the homes of people who died in hospital, were murdered or committed suicide.

At first, Miyu found the work tough. The scenes could be grotesque. Even after the body has been removed, hair and seepage from the corpse sometimes remain. The work can be physically demanding. But “what I find most difficult,” she explains, “is to talk to the family. I don’t know how much I can really ask or talk.”

To preserve and document the scene, the company always takes photographs of the rooms in case relatives want to see them. However, Kojima noticed that the photographs really don’t capture the sadness of the incident. And while she had no formal art training, she decided to go to her local craft store and buy supplies, which she used to create her replicas. She sometimes uses color-copies of the photographs, which she then sculpts into miniature objects.Kojima says that she spends about 1 month on each replica. 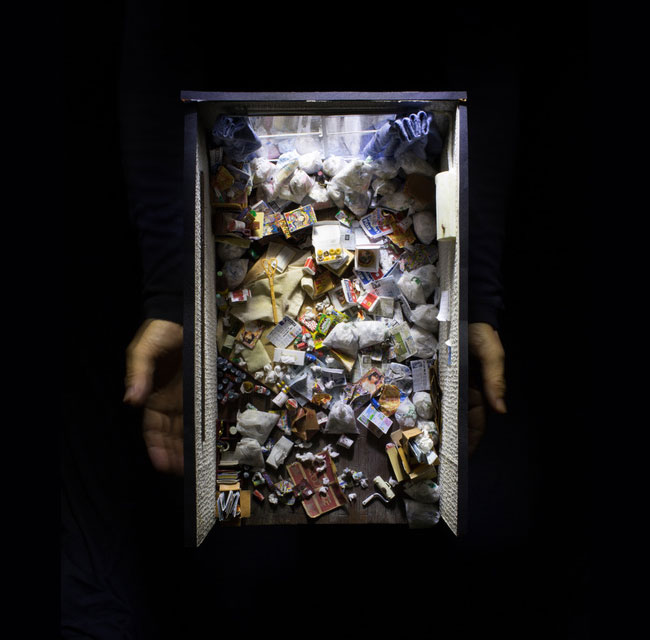 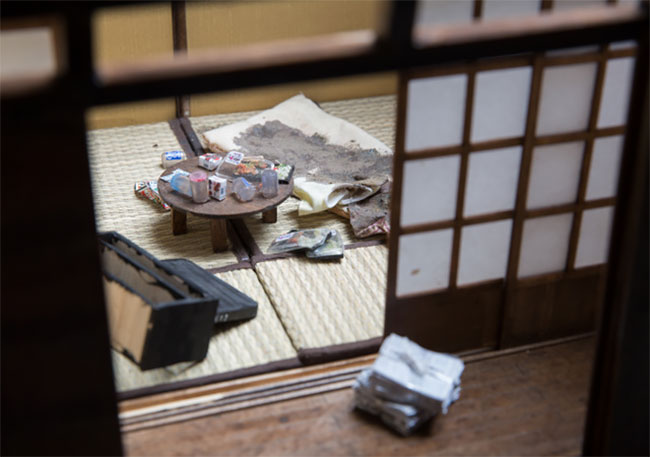 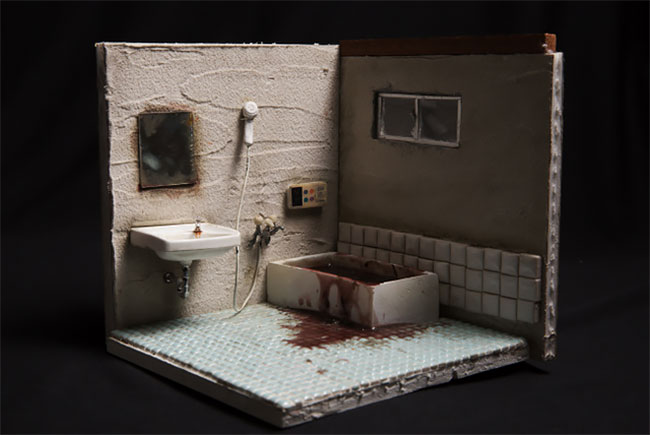 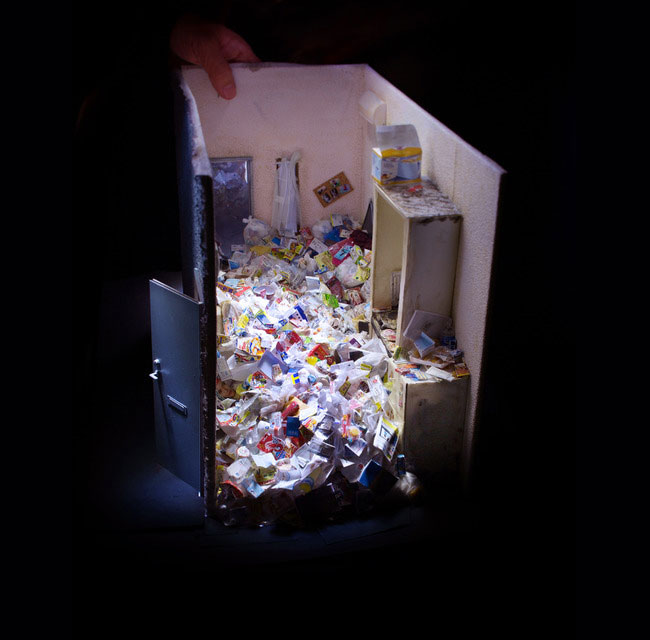 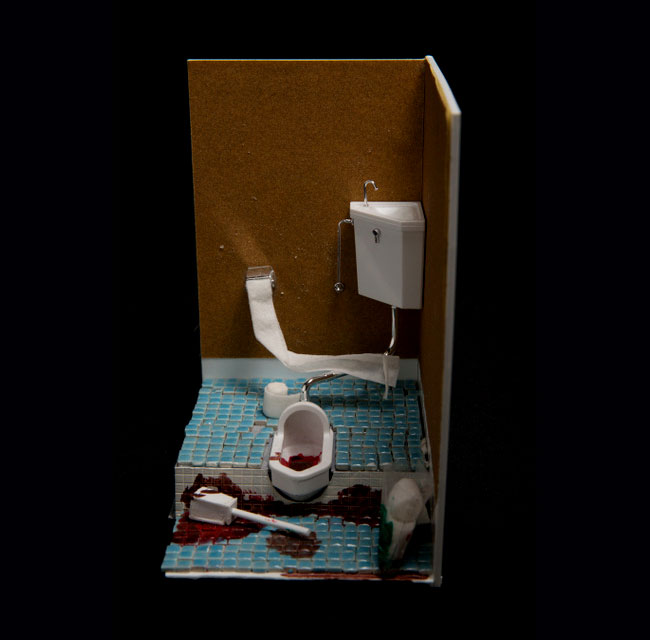 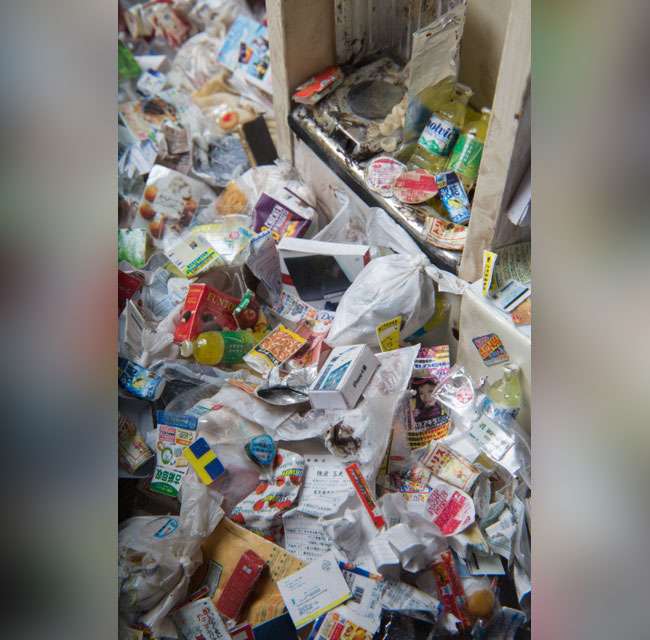 Like People But Even Better: Charming and Realistic Dolls by Anna Zueva
Someone Optimized Famous Logos To Use Less Ink And Be More Environmentally Friendly
An Artist Built a Tower in the Water to Give You a Different Perspective
Meet Gaku Azuma, a Japanese Artist Who Transforms Bodies Into Amazing Ink Paintings
These Artists Makes Belgian Lake Mysteriously Glow
Two Artists Creates A Unique Clock Collection Made Of Old Vinyl Records
Anonymous Artist ‘Wanksy’ Draws Penises On UK Potholes To Make Government Fix Them
This Craftsman Creates Absolutely Badass Steampunk Masks, Outfits And Accessories
Korean Artist Transforms Well-Known Products Into Origami Miniatures
Photographer Finds Charming Japanese Countryside Scenes that Look Right Out of an Anime
Circuits And Nature Unite In Georgie Williams' Futuristic Tattoos
Artist Pays Homage to Possibly the Biggest Icon of The 21st Century with His 'Tribute' Project
Samurai Armor Hoodies From Japan
Street Art Sculptor “Unzips” A Building In Milan For Mind-Bending Art Installation
This Clock Says It’s Always Time For Moss
Feminist Artist Launches Silk Scarves Made From Images Of Her Own Vagina
Alfabeto Pittorico: An Alphabet Book Of Fictional Architecture By Antonio Basoli
Dad Builds Triple Rocking Chair So He Could Read To His 3 Kids
This Russian Fixed His Car Bump On A Most Genius Way Ever, By Painting
Nearly 3000 Take Part in New Year Calligraphy Challenge in Japan
Portuguese Street Artist Wrapped Up A Giant Squirrel On The Streets Of Tallinn In Estonia
This Alien Face Mask Is Sure To Keep Covid At Bay
Vietnamese Man Made A Fence From Old iPhones
Dimensions Blur In Aakash Nihalani’s Minimalist Optical Illusions
death, japan, kodokushi, Miyu Kojima

Creative Agency Buys $10k Of Blank Ad Space To Give Everyone A Break From Ads
Women And Cats: Contemporary Bijinga Paintings By Kazuho Imaoka
Romanian Designer Creates This Concrete Lamp, So The User Can Smash The Shade To Reveal The Reinforcing Steel Mesh
An Artist Recreates The Most Stolen Objects In Stores
Artist Turns Her AirPods Into Earrings In Order to Keep From Losing Them
This Pop-Art Pool Is A Shining Example Of Designer Richard Woods’ Artistic Vision
New Yorker Creates The Funkiest Staircase Ever, And It’s For A Good Cause
Your Beautiful Home In 1974 On A Budget
Hyperrealistic Snake Canes Look Like They're About To Bite You
This $5,900 Desk Let’s You Work On Your Computer Lying Down
Source of inspiration since 2007. Proudly hosted by WebHostingBuzz.
Privacy Policy · Terms of Service · Content Removal Policy 🇺🇦 ❤️